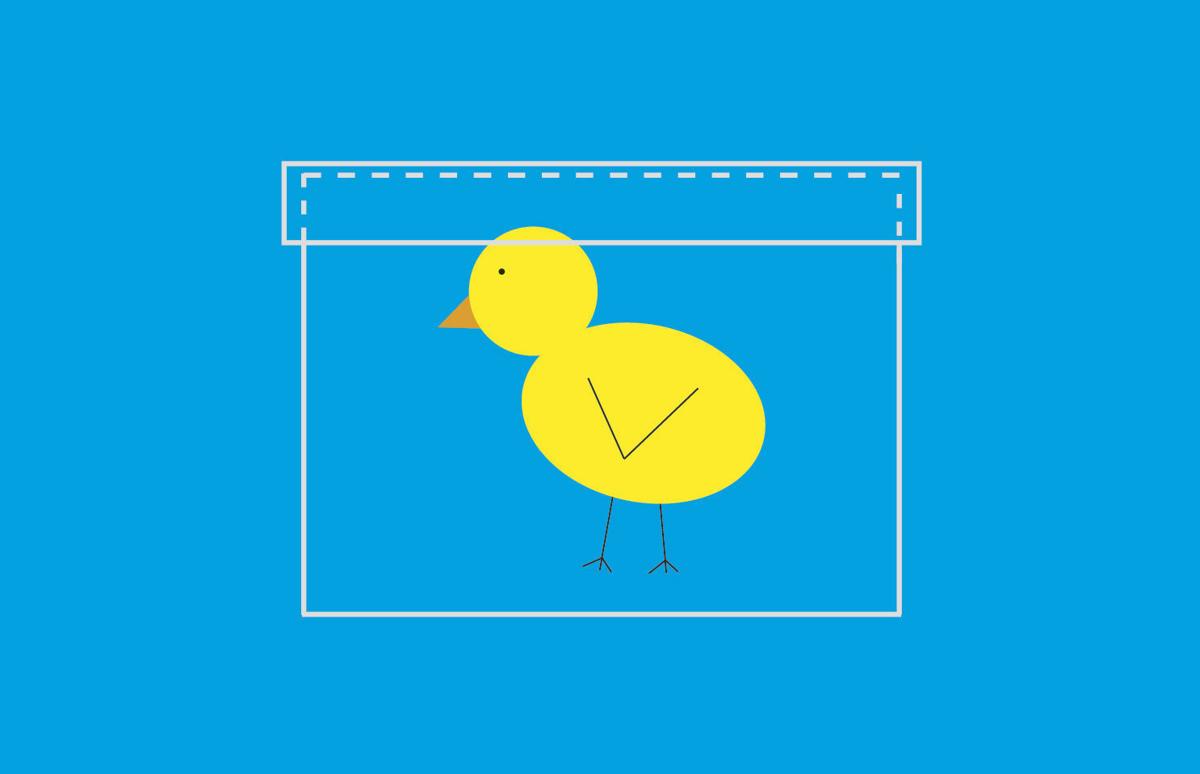 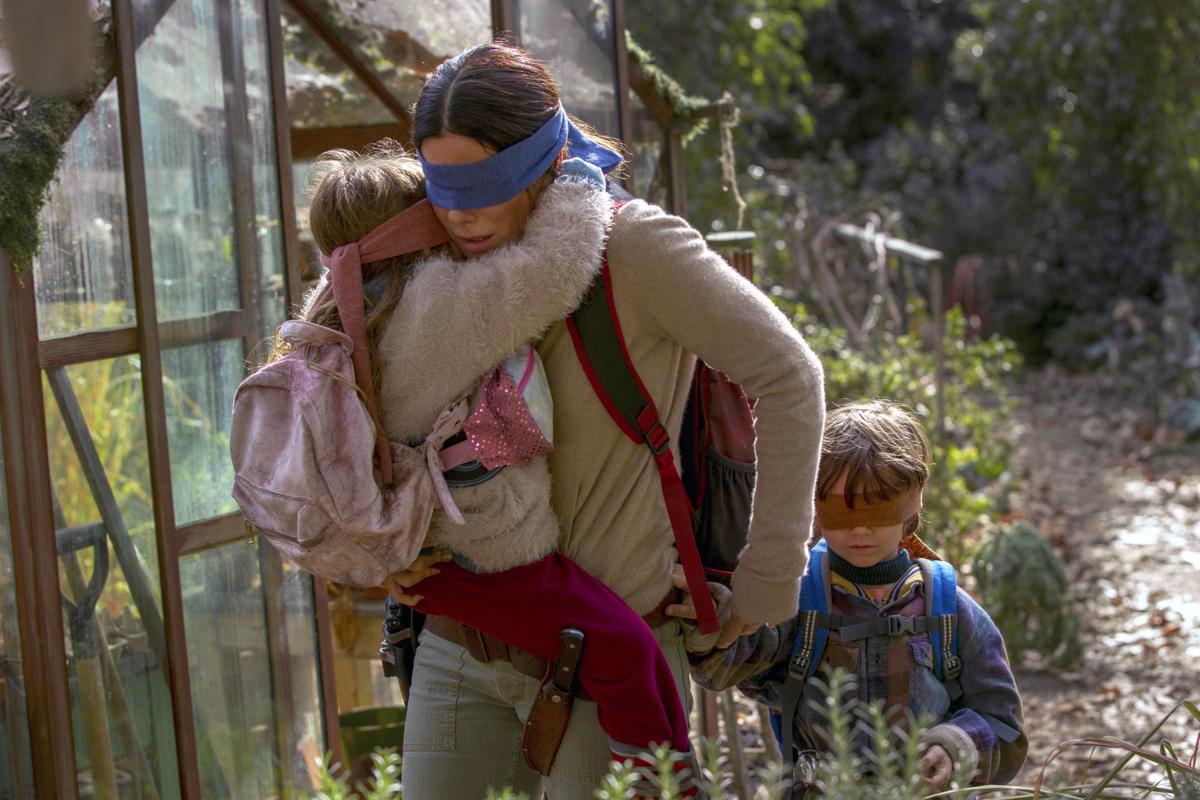 This image released by Netflix shows Sandra Bullock in a scene from the film, “Bird Box.”

“Bird Box” is a Netflix original movie you might have heard of due to the massive influx of memes about it when it released, which may or may not have been pushed by Twitter bots as part of a massive social media marketing campaign.

Adapted from a novel by Josh Malerman and starring Sandra Bullock, it’s essentially about a post-apocalyptic world where a mysterious force zooms around, forcing people who look at it to immediately commit suicide. Not everyone though, because sometimes it just makes them run around trying to make everyone else look.

To get around this, people wear blindfolds. And stay inside a lot. The general concept is very straightforward. The end result is not very good.

You can tell it’s a Netflix original from the gratuitous opening drone shots. You can tell it’s “Bird Box” because within the first three minutes you literally see them put a bird inside of a box. The birds, it turns out, can sense the evil presence, warning people to be extra careful about not looking.

Sandra Bullock’s character is the caretaker of two children, named Boy and Girl. They’re on their way to some type of sanctuary, as people tend to be doing in these sorts of films, so they have to journey on a boat down a river, blindfolded all the way.

Through flashbacks, the audience learns the whole situation started five years earlier, when people all over the world just started killing themselves for no reason. It arrives in North America while Sandra Bullock is at the hospital with her sister.

They try to escape, driving away in a cute little wood-paneled SUV, but the sister is taken over, crashing the vehicle before stepping in front of a truck. Sandra Bullock gets away and finds shelter inside a house.

There’s way too many people inside the house. Not from, like, the viewpoint of Sandra Bullock or from a logistical standpoint. It’s just that the plot has absolutely no need for so many auxiliary characters.

Here’s an example: Two of the extra people are junkie and a cadet at the police academy. Their entire purpose is to make a couple snarky comments to each other, get caught having sex in the closet then run away together in the only car the house has.

So they serve to remove an important method of transportation from the group. OK. Except the same thing could have been done by running out of gas, or an accident, as they blacked out the windows and had to use GPS navigation to drive (side note: if they had Tesla’s patented self-driving technology, mobility would have been a breeze — just an example of the poor suffering while the rich, assumably, thrive).

Even something as simple as a dead battery would have worked, leaving all the wasted screen time to be put to a better use, like explaining one single thing about why this weird force makes people kill themselves, or maybe just why Sandra Bullock is so emotionally scarred that she yells at children who want to play.

And those are just two of the extra people. The others are mostly there as a check-in for the audience. Is the spooky wind still spooky? Yep, it just made this lady stab herself in the neck with scissors. Cool.

Then after all the extras die off, the movie just skips ahead a few years.

Groups in “Bird Box,” zombie apocalypse films, etc. need a maximum of five people: The main character, who takes most of the screen time; the cop, who’s grouchy and competent and will possibly betray everyone; the super negative, mean one, who complains the whole time and will almost certainly try to run away with all the supplies; the nice one, who is a good friend to the main character and either dies (R-rated movies) or survives and falls in love (PG-13); and the panicky one, who starts off as a coward and then sacrifices themselves for the group right before their schtick becomes annoying.

“Bird Box” could have gotten away with three, as the flashbacks just serve to explain why Sandra Bullock and these children are running around blindfolded. It probably all makes a lot more sense in the book, but people aren’t watching the book on Netflix, so that doesn’t really matter.

By the end of the movie Sandra Bullock and the kids finally get to the sanctuary, which turns out to be at a school for the blind, as visually impaired people essentially have a super power in this new world.

So here’s some interpretations of “Bird Box,” and also some questions:

It could be a sort of grotesque, poorly-explained twist on a Thanos situation, where a majority of the population is killed off so the rest can thrive in a world where resources aren’t so strained.

It could just be pointless, a story that got picked up because Netflix had a lot of money to spend and Sandra Bullock attached her name.

Or, and this seems the most likely, it could be some sort of condemnation of social media, where the only way to survive is to ignore the disembodied voices and focus on yourself and your loved ones. Which would actually be hilarious, given the marketing strategy of the film.

But what on earth is the evil power thing? How does it work? Where did it come from? If nothing can happen to you while you’re blindfolded why did people get so scared when the evil thing came around?

Why does Netflix keep making content concerning suicide without any disclaimers?

Is there just one Netflix drone they keep using over and over or do they buy a new one for every show?

If people wear blindfolds every time they go outside, why don’t they have tan lines on their faces?

Anyways, “Bird Box” isn’t great. But watch it if you’d like — the memes were pretty funny.

Noah Ripley is a page designer at The News-Review. Reach him with movie suggestions, questions or anything else at 541-957-4205 or nripley@nrtoday.com.

The moral quandaries of 'The Lion King'

Watch 'I Think You Should Leave' right now