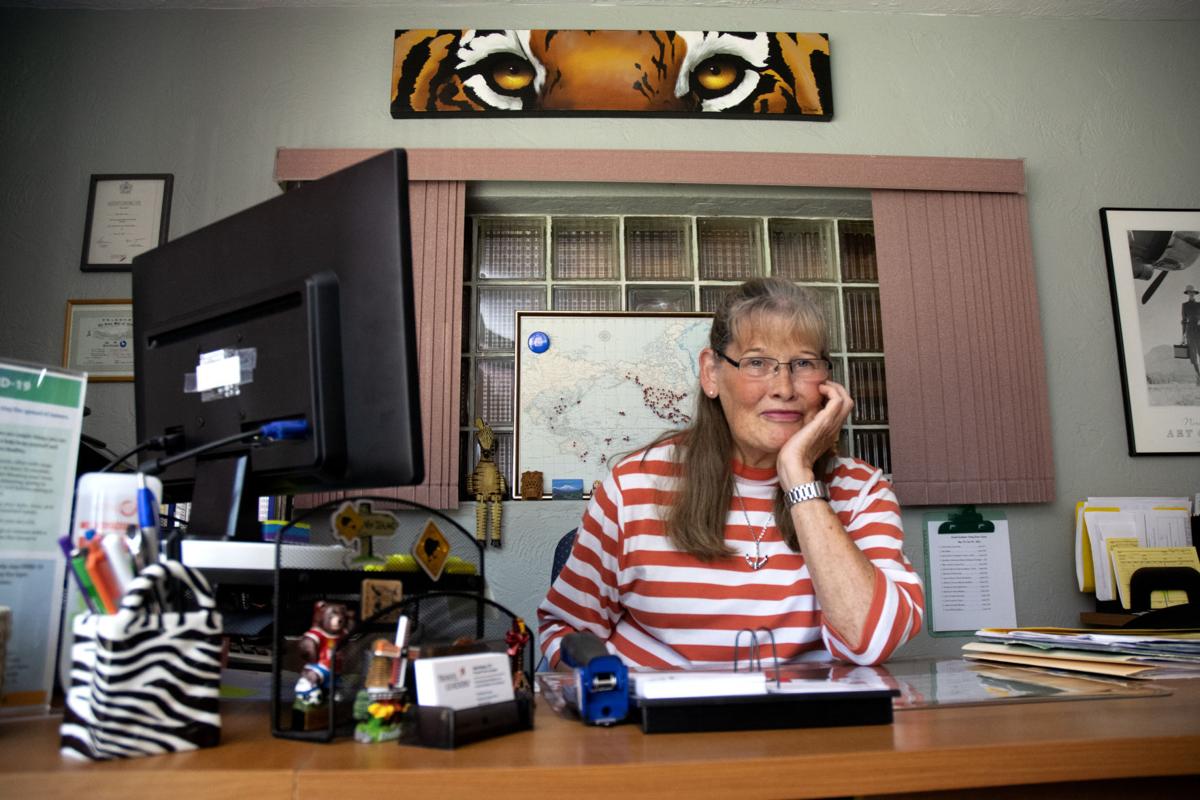 Jane Green has been with Travel Leaders/Fly Away Travel in Roseburg for the past 42 years. In the past month, much of her time in the office has been spent either canceling or rescheduling travel plans. 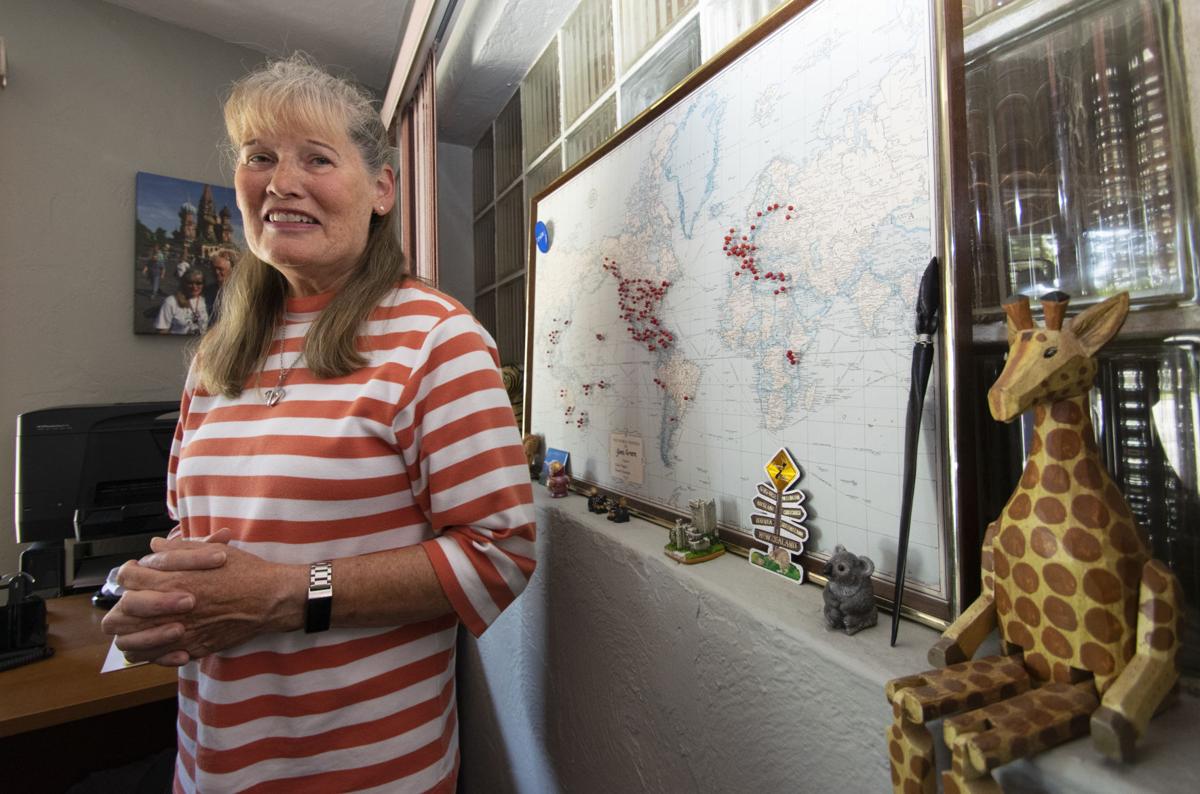 A map of the world in Jane Green’s Roseburg office pinpoints the places she’s traveled to in this portrait taken on Tuesday.

Jane Green has been with Travel Leaders/Fly Away Travel in Roseburg for the past 42 years. In the past month, much of her time in the office has been spent either canceling or rescheduling travel plans.

A map of the world in Jane Green’s Roseburg office pinpoints the places she’s traveled to in this portrait taken on Tuesday.

After spending years aboard ships in the U.S. Navy, Umpqua resident Larry Sutton found another way to sail the ocean during his retirement: going on cruises with his wife, Giuli Sutton. After traveling the world and seeing all seven continents, Sutton has had to put his usual travel plans on hold because of the coronavirus.

The Suttons had upcoming cruises to Alaska, from Boston to Canada, and the Panama Canal as well as a land tour of Washington, D.C., and a trip to Disneyland. All five trips had to be canceled due to COVID-19 precautions.

“We’re not upset with them for canceling, we understand what’s going on,” Sutton said, and added that they’ll probably wait for a vaccine to reschedule. “We’re excited to get back out there.”

On top of the long list of disruptions caused by the pandemic, COVID-19 travel restrictions and precautionary cancellations by airlines, cruises and tours have affected summer vacation plans for people in Douglas County.

Despite restrictions, the majority of recent COVID-19 cases in Douglas County were linked to travel outside the state, according to the Douglas Public Health Network. The agency has also seen a summer surge of people visiting from out of state.

For the Suttons, who have been able to get bonus credits from cruise lines for postponing their trips, the only cost has been boredom. The retired couple are trying to keep busy as they stay at home for the foreseeable future.

At that, Giuli Sutton’s laughter interrupted him, which made Larry crack up too. He added that they’ve become involved in crafting: he’s building model airplanes and she’s painting with watercolors.

Their travel agent, Jane Green of Fly Away Travel, said she now spends most of her time refunding and rescheduling people’s trips.

“It brought it all to a screeching halt,” Green said.

Green said that she has worked with over 500 refunds since March. Most people, she said, have been able to get refunds for their canceled bookings, and some cruises are offering incentives for customers to rebook instead of cancel.

On July 1, the European Union reopened its borders to travelers from 14 countries who met the criteria for infection rates and containment measures, including having a stable or decreasing trend of new cases. With the Centers for Disease Control and Prevention reporting more than 60,000 new cases per day, the U.S. did not make the cut.

“They don’t want us at all this summer,” Green said. “When they look at the numbers in the U.S., they get scared.”

EU citizens or long-term residents and their family members can still enter, as well as people with essential functions such as healthcare professionals and seasonal workers.

With 3,454,190 total cases as of Wednesday, the U.S. has had the most COVID-19 cases of any country in the world, according to the World Health Organization. That’s over 1 million more cases than Brazil, the country with the second most infections.

Countries outside the EU have also restricted access to Americans. People can only enter Canada from the U.S. for non-discretionary purposes, including work, study and medical care. Anyone who enters must quarantine for 14 days. Americans entering the United Kingdom must also self-isolate for two weeks.

Restrictions aren’t just international. American travelers to Alaska must have a negative COVID-19 test at least 72 hours before departure, or opt to quarantine for 14 days upon arrival. The same goes for Hawaii, starting Aug 1.

These domestic restrictions mean Roseburg resident Carol Johnson is staying home to celebrate her 50th wedding anniversary with her husband Greg, instead of going on an Alaskan cruise with a large group of friends.

The party of around 20 people met at Umpqua Community College in 1968, as part of a campus activities group, and have been close ever since. Two other couples had gotten married the same year, and they all planned on celebrating together this August.

“We hope to do more in the future, it’s just about getting through this thing,” Johnson said.

Johnson said she will wait as long as necessary to be safe, but hopes she will be able to celebrate her anniversary with the college reunion next year.

“One thing, in all of this,” Johnson said, “for people to have lifelong friendships, you can’t take it for granted. You have to nurture it.”

It’s not only coronavirus cases that are rising. Now covid deaths are, too.