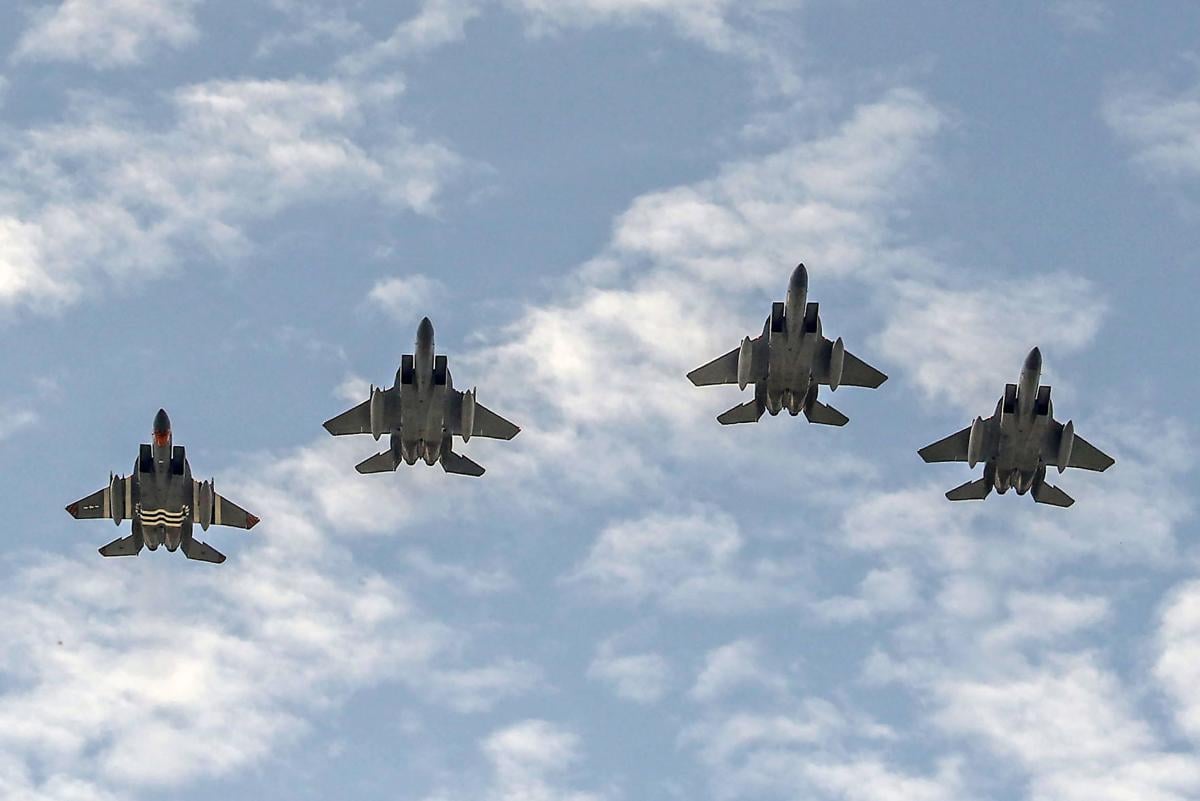 Four F-15 Eagles from the Oregon Air National Guard pass over the CHI Mercy Medical Center shortly after 11 a.m. in Roseburg on Saturday. 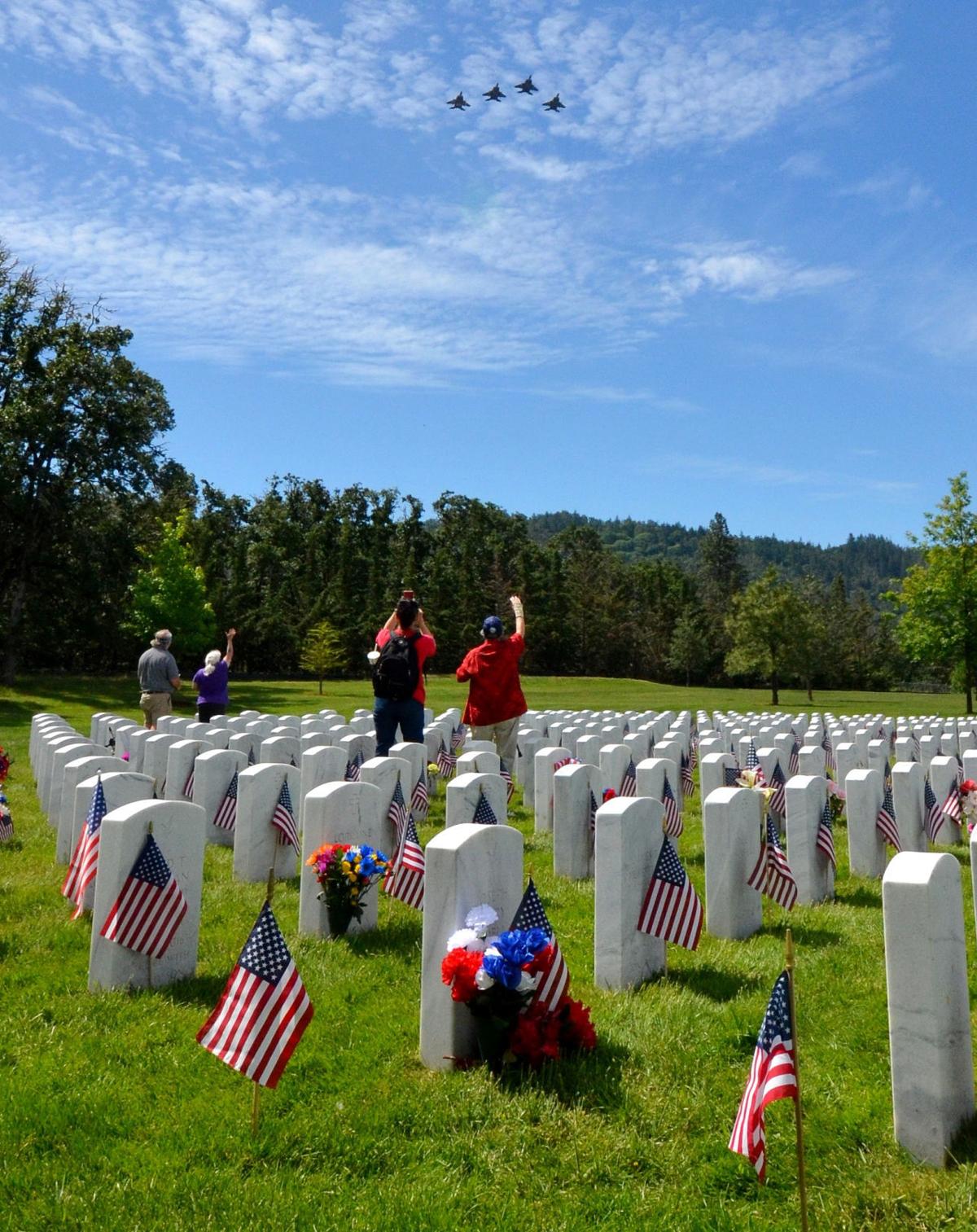 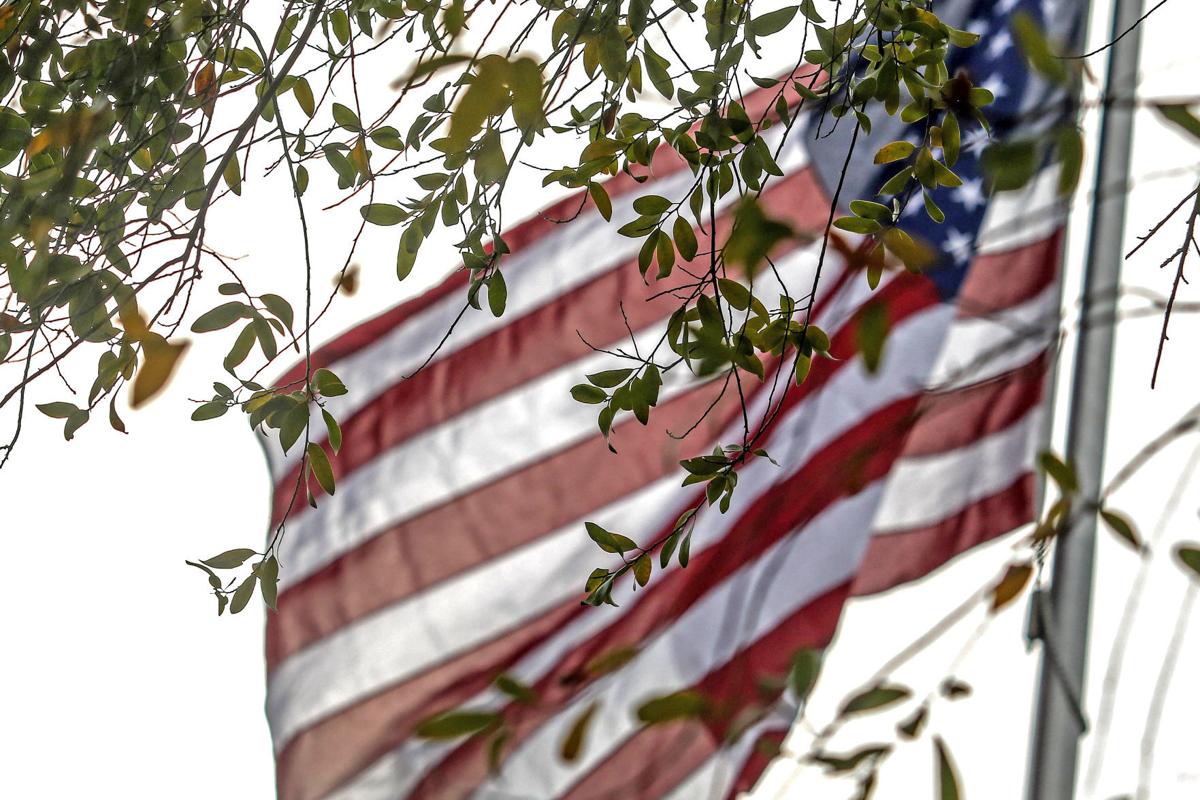 The American flag is visible through the branches at the VA National Cemetery in Roseburg on Monday. 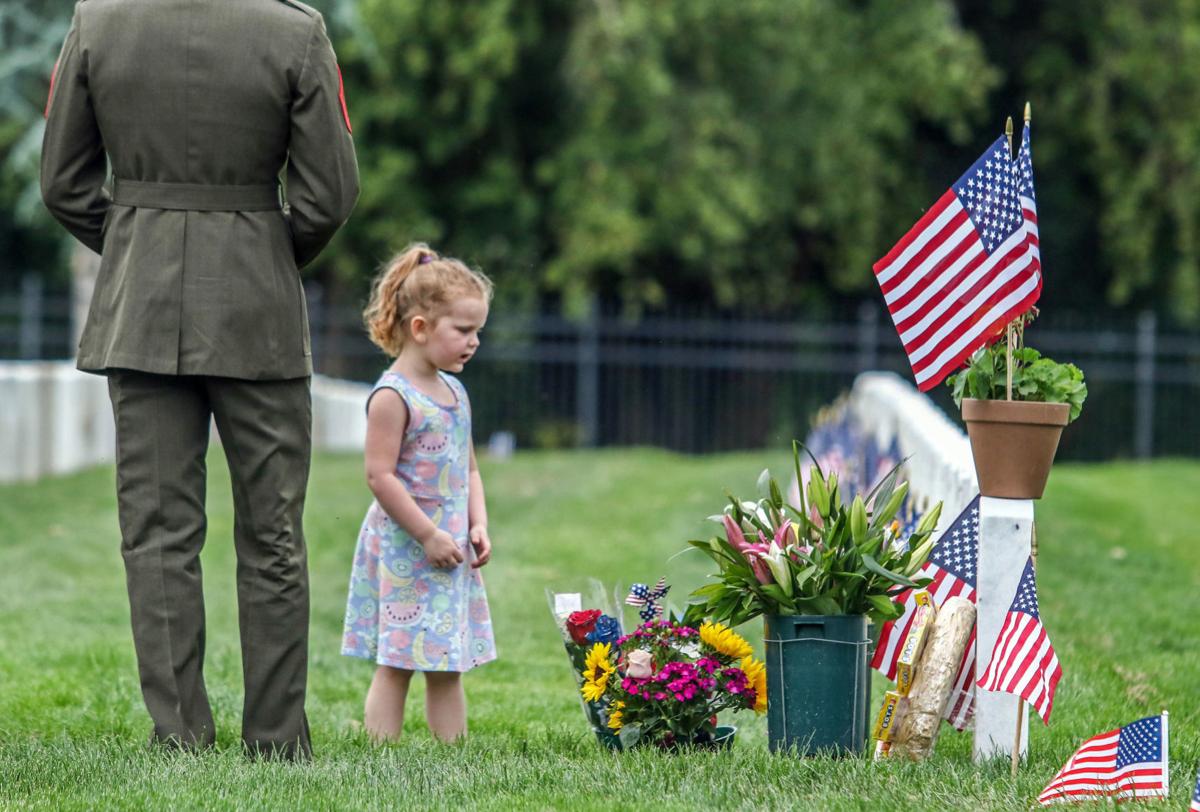 Aria Seekins, 4, examines a headstone at the Roseburg VA National Cemetery while standing next to friend Gregg Mock on Memorial Day. 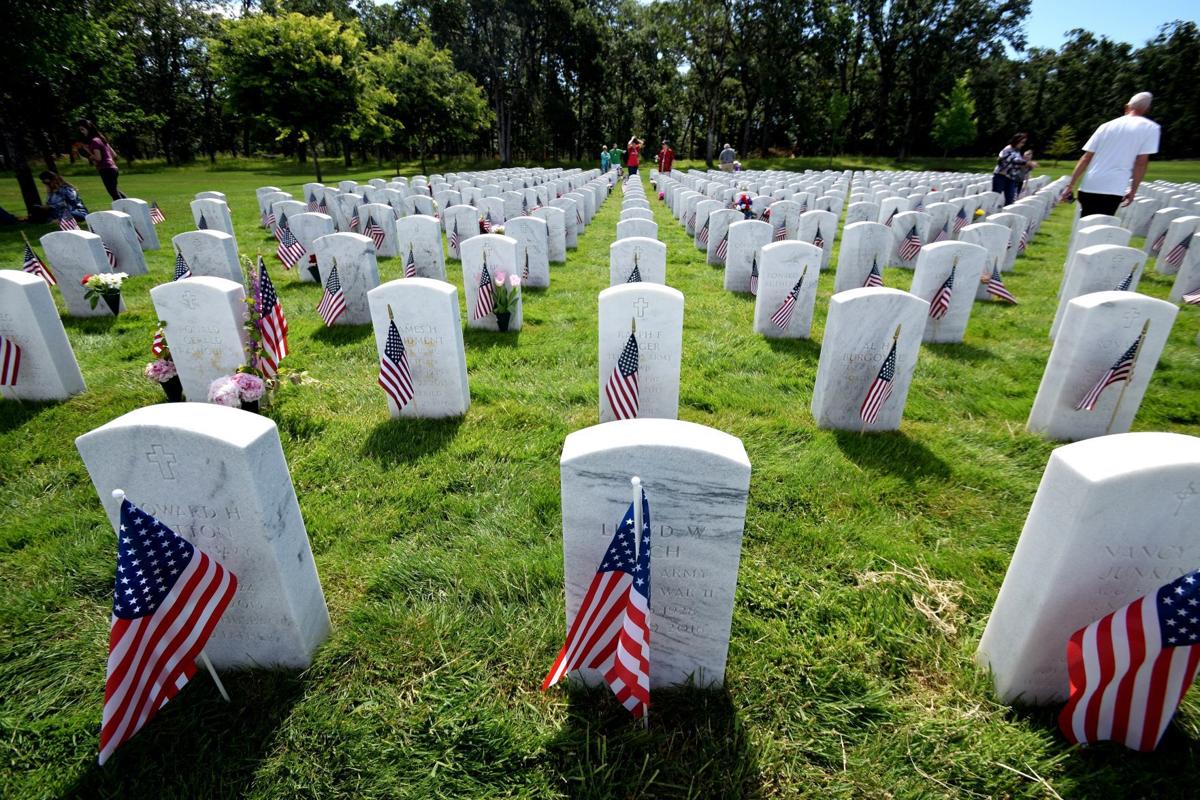 Family and friends of former military servicepeople walk among gravestones at the Roseburg National Cemetery Annex near the VA Medical Center campus in Roseburg. 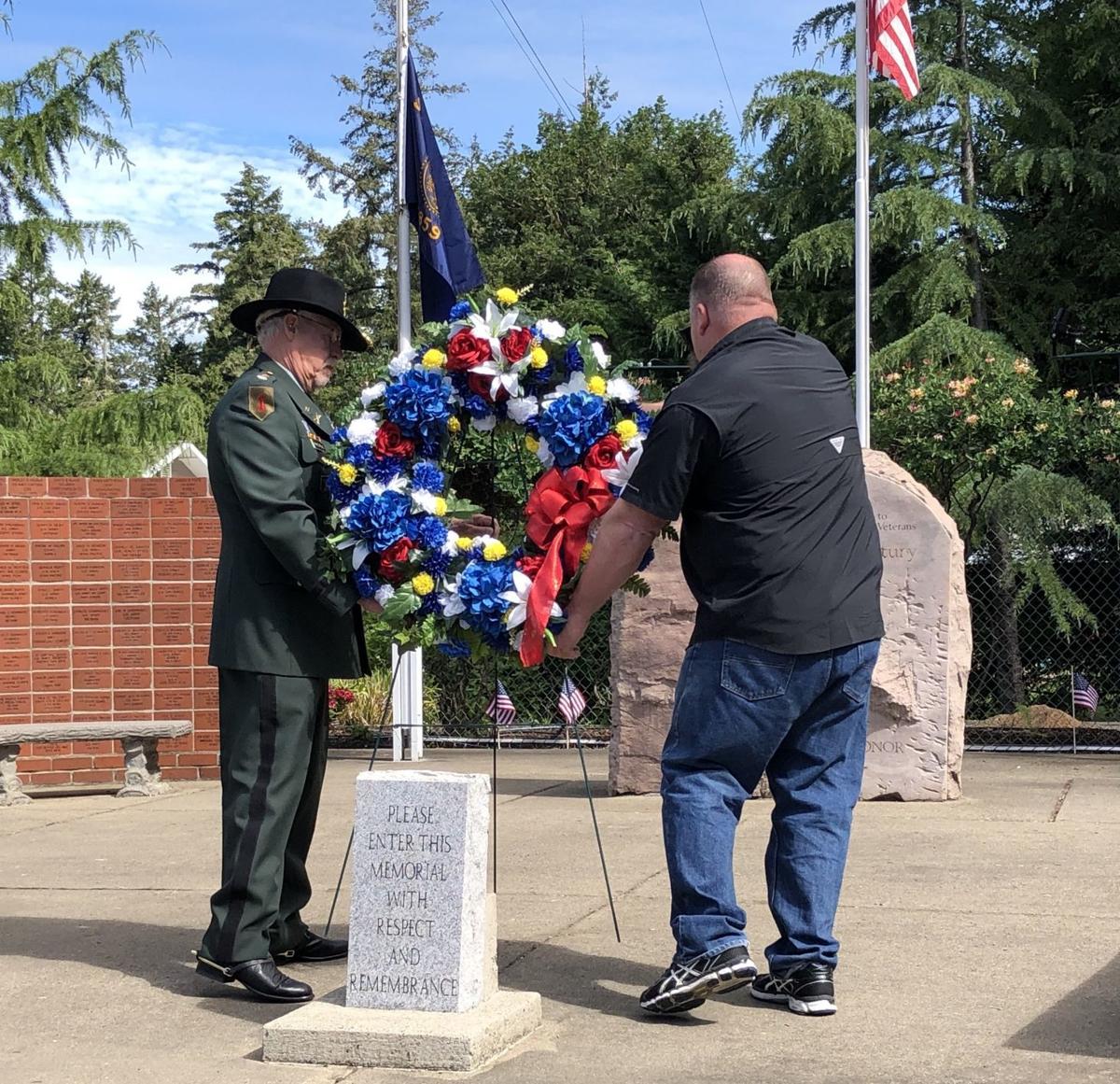 Four F-15 Eagles from the Oregon Air National Guard pass over the CHI Mercy Medical Center shortly after 11 a.m. in Roseburg on Saturday.

The American flag is visible through the branches at the VA National Cemetery in Roseburg on Monday.

Aria Seekins, 4, examines a headstone at the Roseburg VA National Cemetery while standing next to friend Gregg Mock on Memorial Day.

Family and friends of former military servicepeople walk among gravestones at the Roseburg National Cemetery Annex near the VA Medical Center campus in Roseburg.

From down-sized ceremonies at the Roseburg VA National Cemetery Annex and Glide Veteran’s Memorial to a flyover salute to COVID-19 front-line workers by the Oregon Air National Guard, Douglas County turned out to celebrate Memorial Day on Monday.

In anticipation of a flyover by four F-15 Eagles, people filled the parking lot of the former Kmart store in Roseburg. Children positioned themselves on the hoods of vehicles and more than one American flag was visible.

A handful of employees from CHI Mercy Medical Center stood outside the front doors of the hospital to watch the flyover designed to honor them and other health care workers and first responders across Oregon.

Shortly after 11 a.m., somebody shouted, “Here they come.”

The F-15 Eagles emerged from the south, flying approximately 2,000 feet above the ground at an airspeed of 400 mph. After passing over the CHI Mercy Medical Center, the jets continued north where they were scheduled to reach Cottage Grove eight minutes later. In a little more than an hour, the jets were able to visit 13 locations in Oregon, including the Roseburg VA Medical Center campus.

Although federal regulations barred the traditional public wreath laying ceremony at the Roseburg National Cemetery Annex on Monday, a small group of local veterans was permitted to make a private tribute.

An opening prayer was given by a member of the Roseburg VA Chaplaincy Service and Roseburg National Cemetery Supervisor Daniel Carver conducted the wreath laying.

The Vietnam Veterans of America held an honor guard rifle salute and playing of taps, and John Pierson of Military Honors by the Pipes recited “In Flanders Field.”

The ceremony concluded with bagpipe music.

Hill said about 10 people were present at the ceremony. He said originally Carver was scheduled to lay a wreath alone, but the forum members were able to obtain approval from the cemetery administration.

Hill said it was his honor to have helped devise a proper service, keep it limited and still provide the ritual to make it a true Memorial Day service.

“My emotions ran the gamut from grief to joy knowing what had transpired and the fact that they joined their comrades in Post Everlasting,” he said. “I feel grateful that I was able to fulfill my obligation to those who have gone on ahead. It is not a duty, for me it is an act of love and respect.”

At the Glide Veteran’s Memorial, about 50 people turned out for a Memorial Day ceremony open to the public Monday morning.

It was a short ceremony with two Army cadets and an Iraq War veteran placing the flags at the memorial located next to the Glide Community Center.

Highly decorated Vietnam veteran Mike Armstrong was the emcee for the event and helped organize it. His son Matthew Armstrong is an Army combat veteran who served in Iraq from 2005-06.

Several veterans and some current members of the military participated in the event.

“For a small-town gathering on a Memorial Day to remember our fallen, it doesn’t get any more meaningful than that,” Mike Armstrong said.

Matthew Armstrong, came from Monterey, California, to help with the event, since his business has been shut down because of the coronavirus pandemic.

“This holiday has become more important to me having understood my dad’s service and the people he served with,” Matthew Armstrong said. “I’m glad to be here to remember those people who gave the ultimate sacrifice and never came back home from the conflicts they were in.”

Jacob Thompson, who just graduated from the U.S. Army Military Academy at West Point, is a Glide High School graduate and celebrated Memorial Day at home.

“It was awesome, well done, it’s much bigger turnout than I expected with the whole pandemic thing,” Thompson said.

Rhett Syverson never got to actually finish his first year at West Point and ended up at home so he took advantage to attend the Memorial Day ceremony in Glide.

“I’m supposed to be at West Point, but the virus has kept us all home since spring break,” Syverson said. “It’s very nice ceremony, but I never expected to get this opportunity, so it’s a very unique opportunity for me.”

There have been 38 new cases of coronavirus in the 6 counties surrounding Douglas County over the past 22 days.

According to Dr. Ashish Jha, director of the Harvard Global Health Institute, most hospitals nationwide now test everyone who is admitted for any reason, roughly 100,000 tests each day, fearing that they may be asymptomatic and yet still spreading the virus.

This is contrary to Mercy Medical Center which is reportedly testing only two people per day randomly.

The Veterans Affairs Hospital in Portland is now testing every patient who comes into the hospital. They are also testing staff and patients who have longer stays every three to seven days. This change comes after a patient came in for another issue, and two days later was determined to be positive for COVID-19. Officials say 28 employees and at least six others became infected.

Well my wife is scheduled for a procedure Tuesday and had to be screened for COVID-19. Mercy had about 10 folks waiting last Friday.

VERY FEW were wearing masks AND STAFF HAD NO MASKS!! So if my wife contracts COVID-19 we'll know where it will have come from, not from leaving the farm which has happened rarely in the past 3 months and then we are exceptionally careful as to where we go get supplies.

Yes, both of us are retired HC workers ..

What a relief ... Surgical Center is the exact opposite of the hospital. PPE's on staff, distancing, etc. (other than when employees entering for work at 0630, no masks, no distancing). Wife was quite relaxed about outcome and process there at the Center including wearing her mask 98% of the time including procedure.

“We are screening everyone, including employees, who come into the hospital,” said Jason Gray, MD, Mercy’s Chief Medical Officer. “Patient care staff are wearing masks, and patient safety, as always, is paramount.”

What does "screening" involve? Is that the same as testing everyone? If not, why?