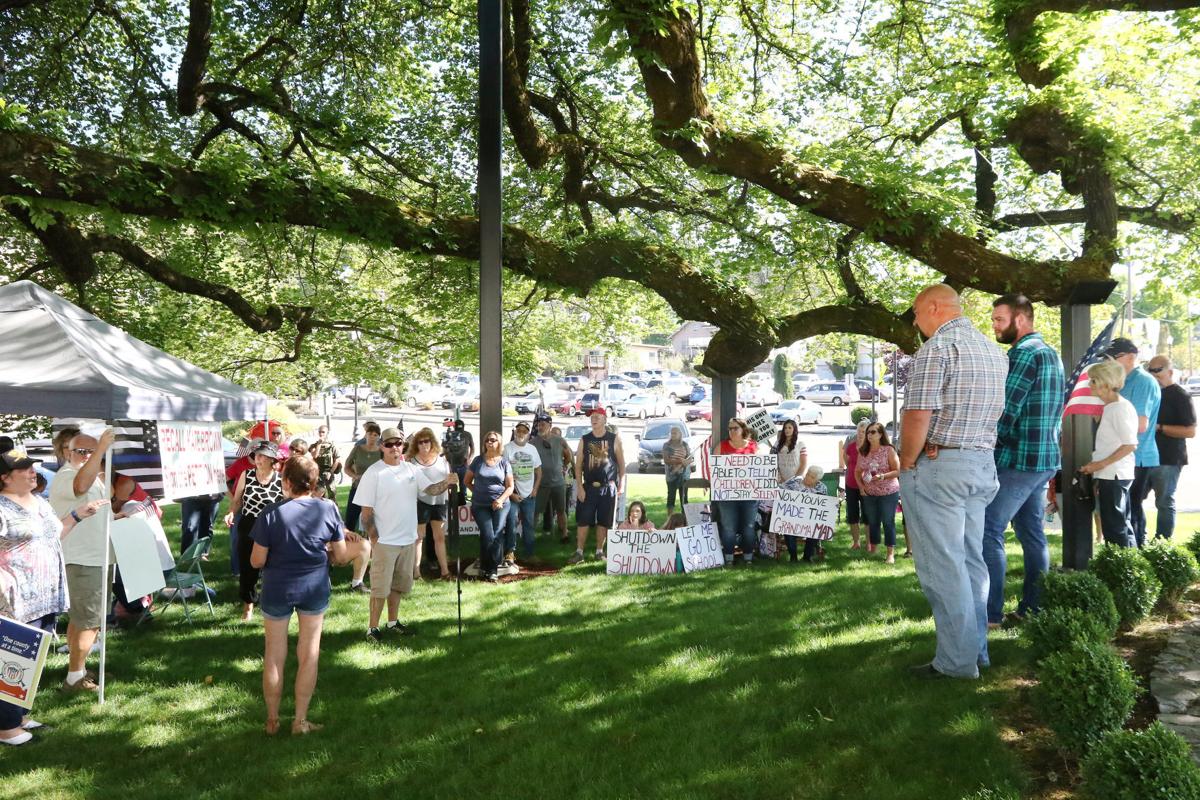 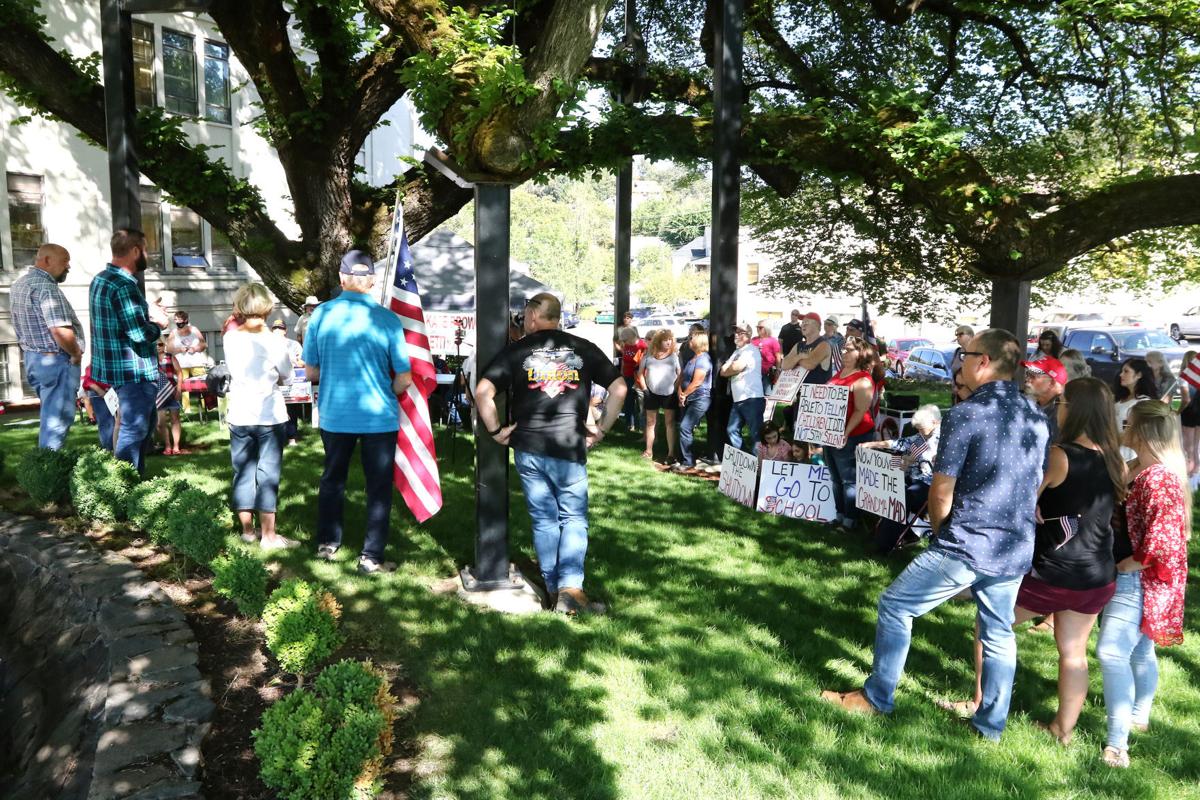 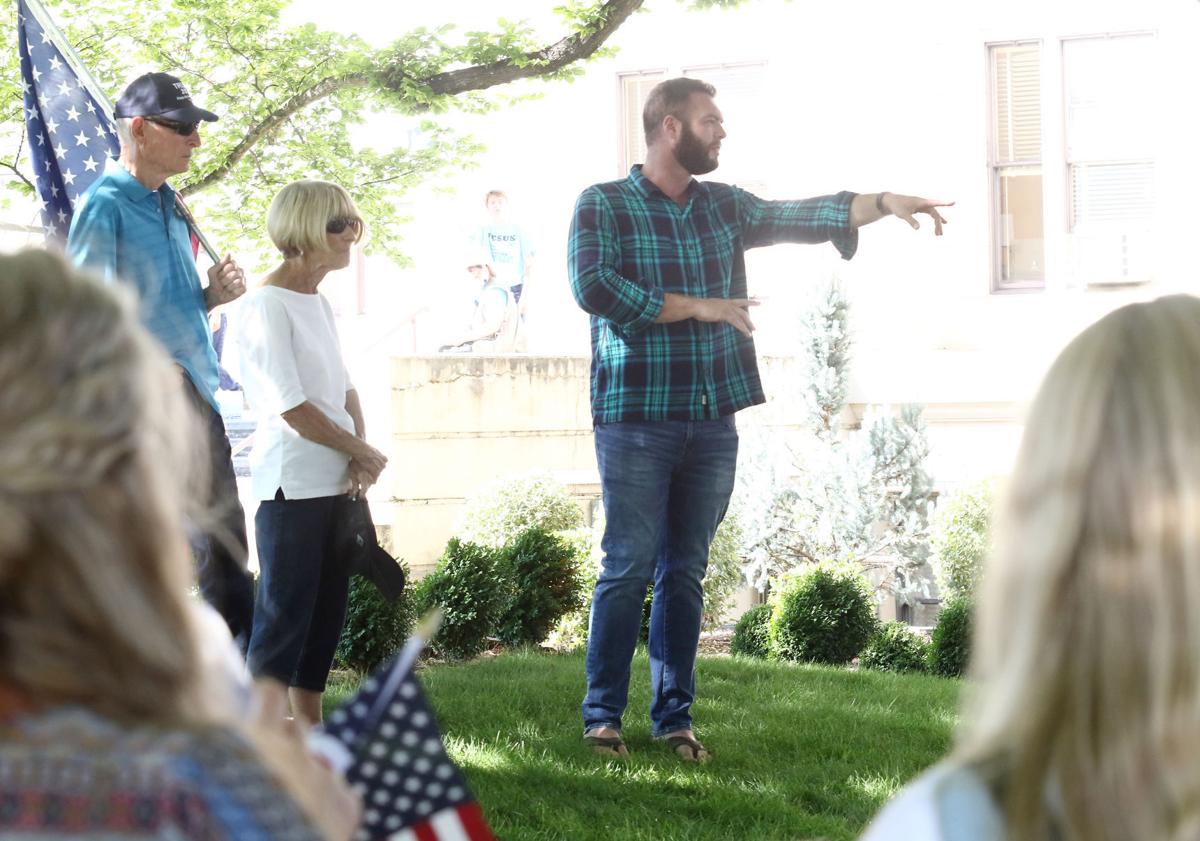 Rep. Dallas Heard speaks to a group of approximately 90 during a rally in front of the Douglas County Courthouse in Roseburg on Tuesday. 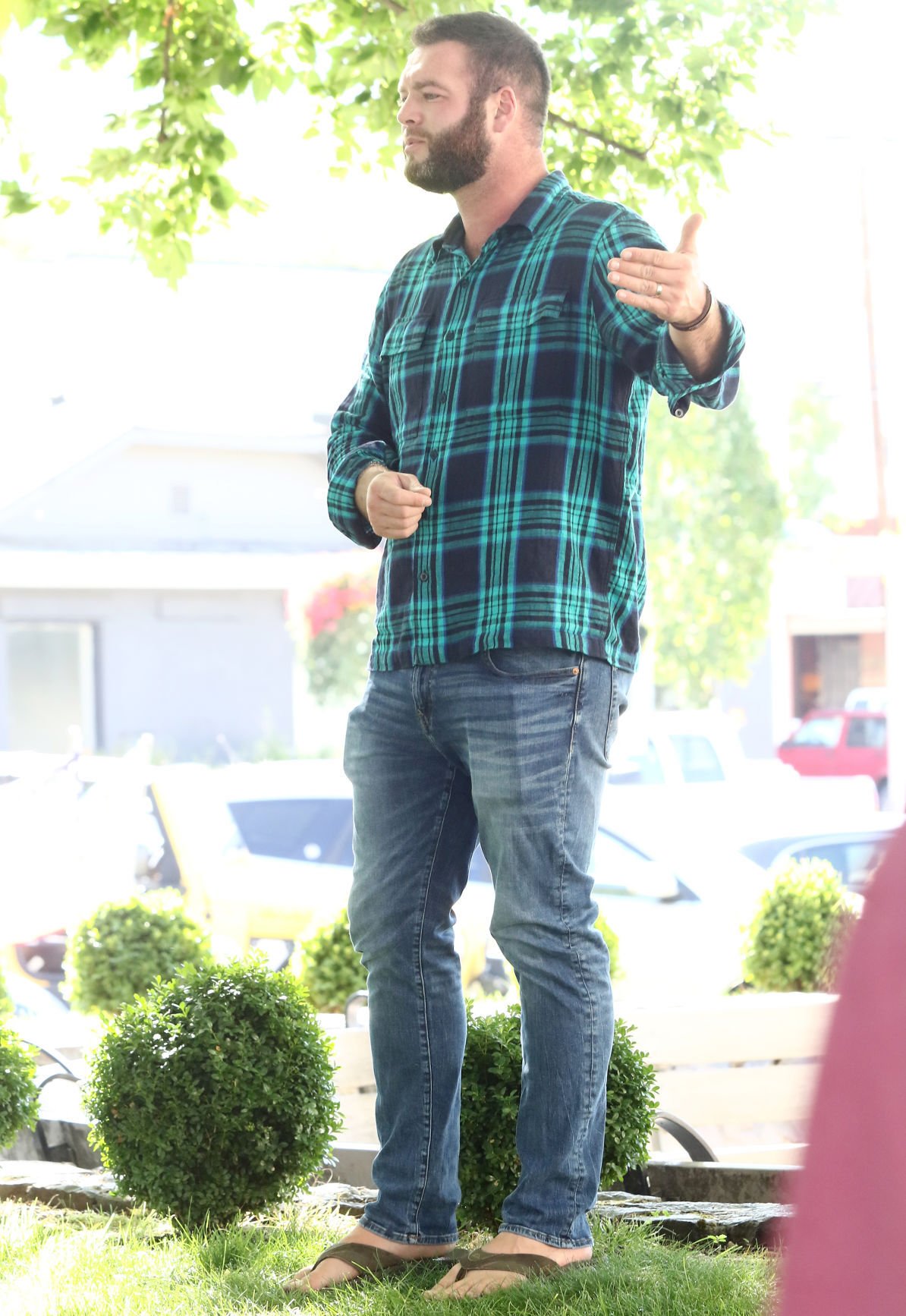 Rep. Dallas Heard speaks to a group of close to 100 during a rally Tuesday in front of the Douglas County Courthouse in Roseburg.

Rep. Dallas Heard speaks to a group of approximately 90 during a rally in front of the Douglas County Courthouse in Roseburg on Tuesday.

Rep. Dallas Heard speaks to a group of close to 100 during a rally Tuesday in front of the Douglas County Courthouse in Roseburg.

A freedom rally at the Douglas County Courthouse on Tuesday afternoon drew about 100 people who came to protest what they said is the overreach of Oregon Gov. Kate Brown.

Signs read “Shutdown the Shutdown,” another read “I need to be able to tell my children I did not stay silent,” a couple of young kids held a sign that said, “Let me go to school,” and several “Recall Gov. Kate Brown” signs were also present.

A booth was set up to collect signatures for Recall Kate Brown petitions and State Sen. Dallas Heard, R-Winston, and Douglas County Commissioner Chris Boice spoke to the crowd and answered questions from the audience about enforcing the governor’s mandates.

“The purpose was to get common minds together that are invested in freedom and liberty, people that are tired of being pushed around, people that feel disenfranchised,” Heard said. “They don’t feel heard, they were wanting to show their local elected officials that there’s people that support what the commissioners are doing standing up to Kate Brown.”

Boice told the crowd the county doesn’t have plans to enforce the governor’s mask requirements.

“We’re on target because Douglas County has done a very good job of preventing the spread,” Boice said. “We don’t feel like going out and enforcing this thing on people that are already doing a good job.

“Not a single person has ever gotten the virus at a restaurant or bar (in the county), so we keep telling the governor, ‘Why do you keep attacking the restaurants and bars when they’re not the problem?’”

Letha Patterson held a sign that read “Now you’ve made the Grandma mad.”

“My granddaughter is a very strong woman, so I came with her and my great-grandchildren too,” Patterson said. “That’s a good turnout and I really like Dallas Heard’s message.”

Rochelle Mobley-Smith said she came out because she listened to Heard at the Nichols Band Shell on Monday night.

“I liked what I heard, I liked what I saw,” she said. “I think he’s an honest man and I think he genuinely cares about the people of Douglas County.”

Bob Murray and his wife, Kimmie, came out because they’re advocates for the Kate Brown recall and wanted to help.

“We want to collect enough signatures, that’s our goal and obviously we’re of the same mind of a lot of people that were asking questions because we want to know how to get our state back,” Bob Murray said.

“A lot of it, for me, is wearing the mask,” Kimmie Murray said.

The rally, which started at 4 p.m. lasted about 90 minutes after it was moved to the shade under the courthouse elm tree.

I'm confused....100 people is not the town of Roseburg. They are the confused.. The rest of us have some common sense

Hmmm. . . . wonder if it will be possible to sue the County Commissioners for negligent homicide when people die because the County has no plans to enforce the Governor's mask mandate? Doesn't the idiot Boice think maybe the mask mandate has actually HELPED STOP THE SPREAD. His stupidity is beyond measure.

"Boice told the crowd the county doesn’t have plans to enforce the governor’s mask requirements. We’re on target because Douglas County has done a very good job of preventing the spread,” Boice said. “We don’t feel like going out and enforcing this thing on people that are already doing a good job."

As he stands in a crowd of people without masks and not wearing one himself.

119 cases on July 28 and 177 today but being forced to wear a mask is a violation of freedom? Freedom to do what? Sicken your family, friends, and neighbors?

Sturgis rally has resulted in increased cases of COVID-19. Cell phone data show that participants then went to at least 61% of counties in the U.S. The virus really does not care about your politics, but the behavior exhibited by some people certainly helps the virus spread. It's really too bad that people who did not make these bad decisions will die because of them.

100 confirmed cases in eight States as a result of Sturgis . . . and that's just the beginning.

It is time for the people who do not support Boice & Heard to step up. Show we are truly in the majority. Vote for Kat Stone to replace Heard, Charles Lee to replace Leif. And in 2022? replace Boice.

smedleyb: Good point. Kat Stone has an excellent understanding of health issues and economic issues (really, the two biggest issues facing Douglas County right now), and she is dedicated to this community. She has years more education than Heard, and a boatload more ethics. Charles Lee understands the law far better than does Leif, who has supported domestic terrorists (and affects a cowboy hat; Leif is a tinhorn).

Civic Responsibility? Not in this crowd. And, as for Boice and Heard as cousins clearly there is a missing gene in their DNA because neither have much brain matter in the Cerebrum area. Duhglas County . . . you are hereby challenged to find dumber people to elect!

So, nothing to show for this event, other than whining about how unfair the Governor is? Wearing a mask is about science, not politics. But that goes right over this crowd's heads. 112,281 residents in Douglas County, and they couldn't even break 100. We'll just call it a Whinefest.

In addition isn't it odd this man, Boice, who has stolen money to go on a first class trip to see the biggest liar passing ALL presidents. He can't even pronounce Yosemite or Thailand and has destroyed the last wildlife dunes in Scotland with the Scottish police as his personal security team. He promised 6000 jobs, really 100 and a very upscale hotel, non-existent!! I wouldn't believe a word Boice and Heard had to say, PERIOD!!

"We're on target because Douglas County has done a very good job of preventing the spread," Boice said.

Does this mean Commissioner Boice targeted two deaths in Douglas County? When was he going to tell county residents what the target is?

Considering how untruthful Commissioner Boice has been on other coronavirus issues, I find it difficult to take his word for it that, "not a single person has ever gotten the virus at a restaurant or bar.” The County has admitted being unable to trace the source of a large percentage of the cases. So how can he make this statement with any certainty?

The Oregon Health Authority provided coronavirus cases for each Douglas County zip codes as of August 23 (below link).

The Douglas County COVID-19 Response Team has reported 6 coronavirus cases over the past week and its 7-day positive test rate remains at 1.1%.