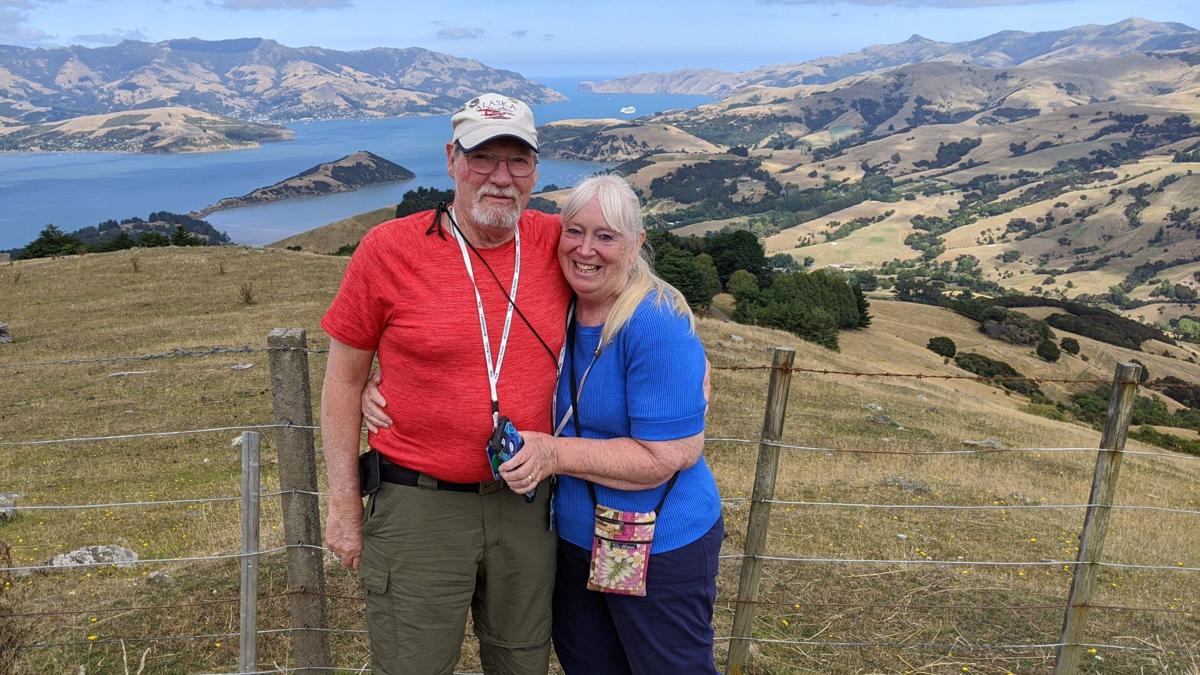 Bruce and Lona Baumann in Akaroa, New Zealand in March 2020. 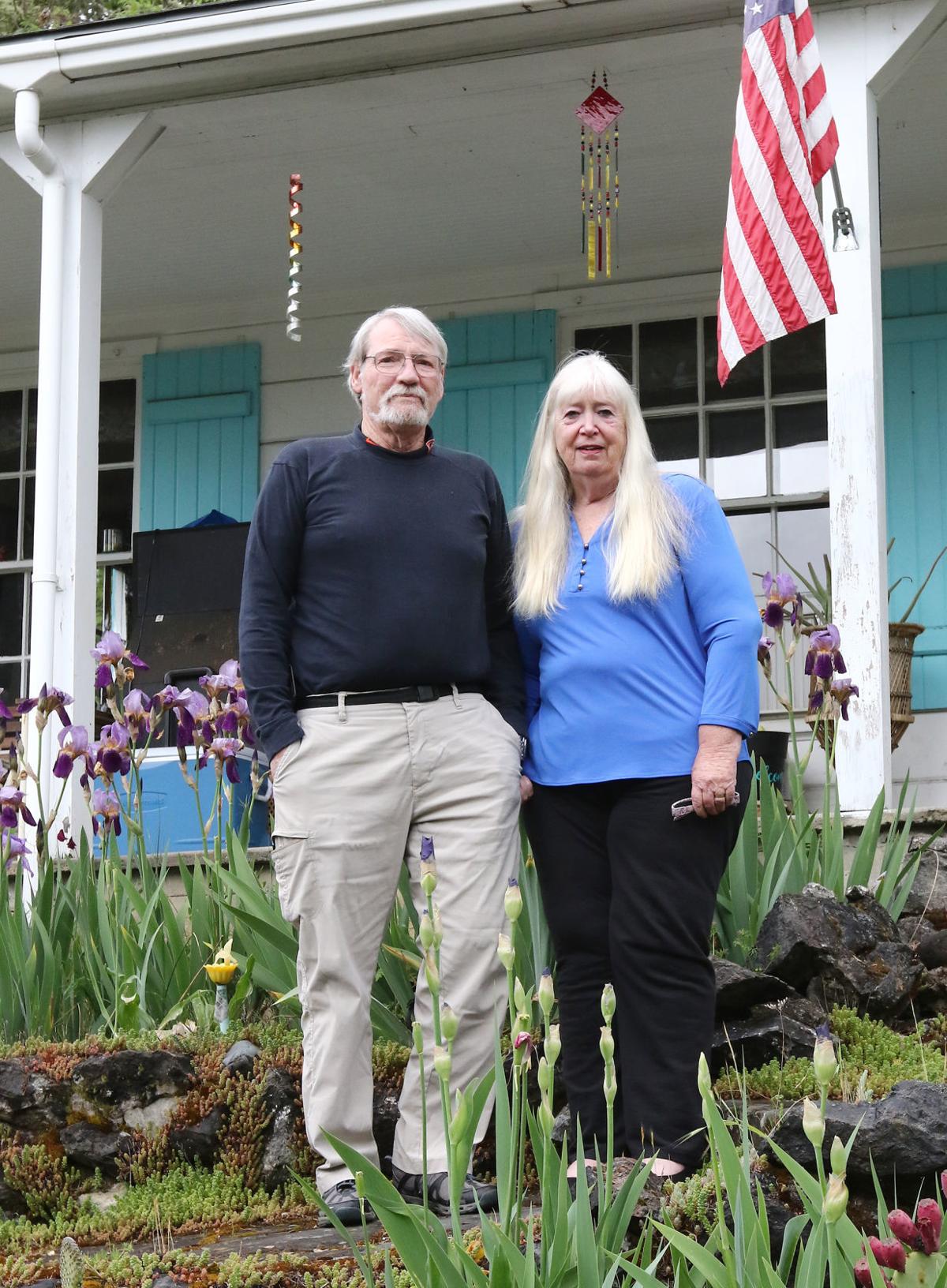 Bruce Baumann and his wife Lona Baumann at their Roseburg home on Saturday. 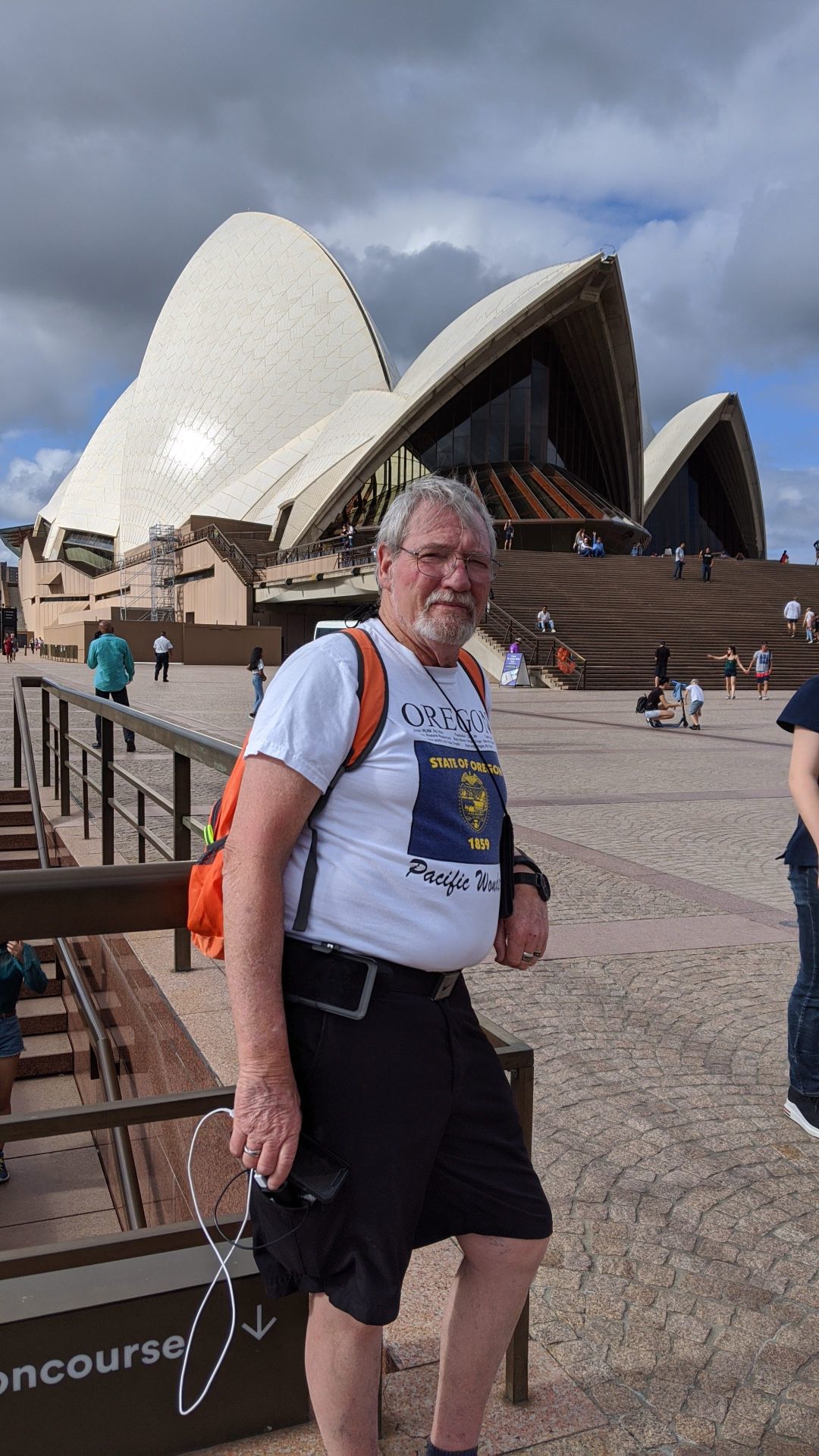 Bruce Baumann in front of the Sydney Opera House during his March 2020 trip to Australia. 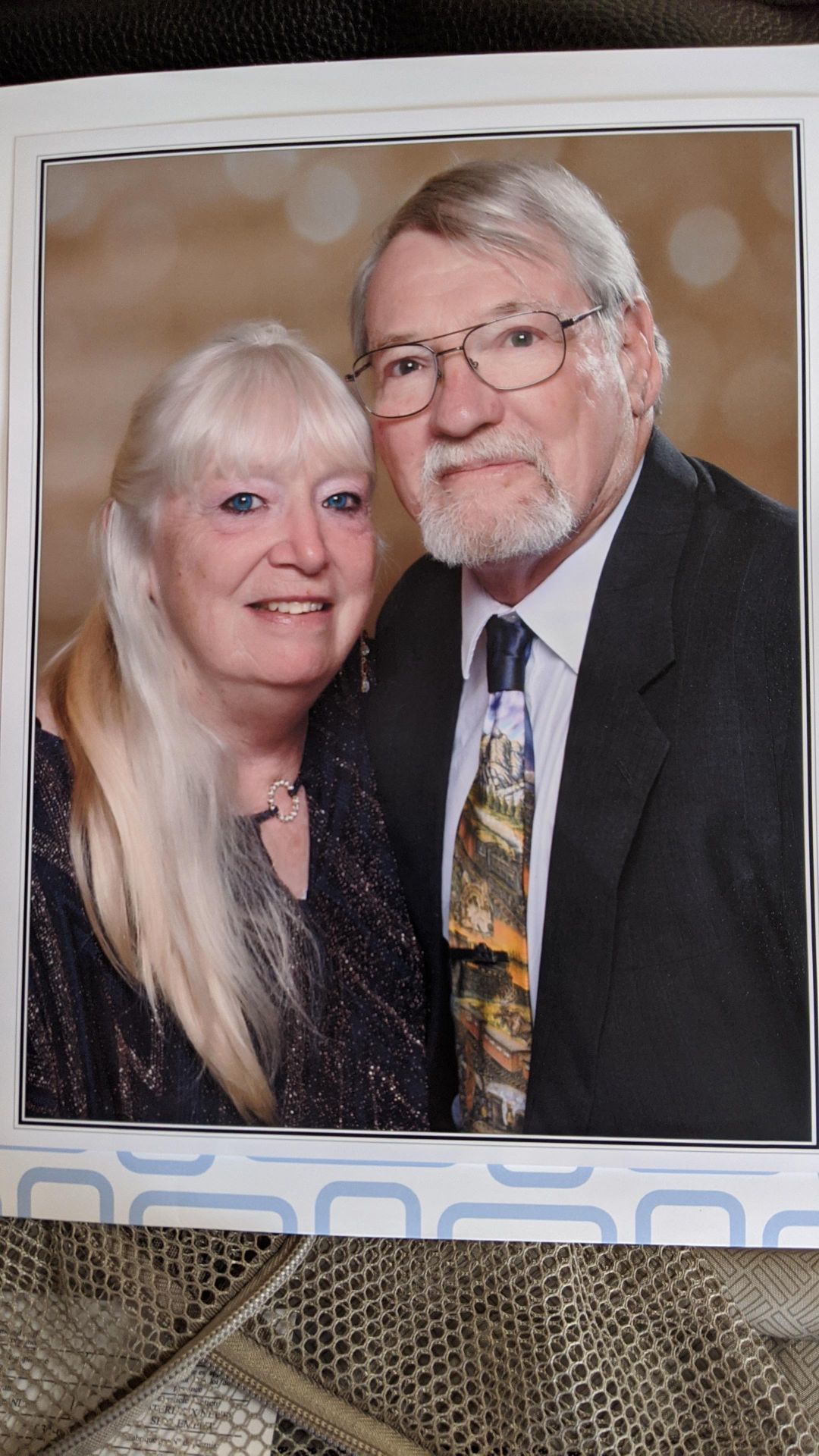 This 30th anniversay photo was taken of Lona and Bruce Baumann on the Princess Ruby in March 2020, during the trip where they contracted COVID-19. 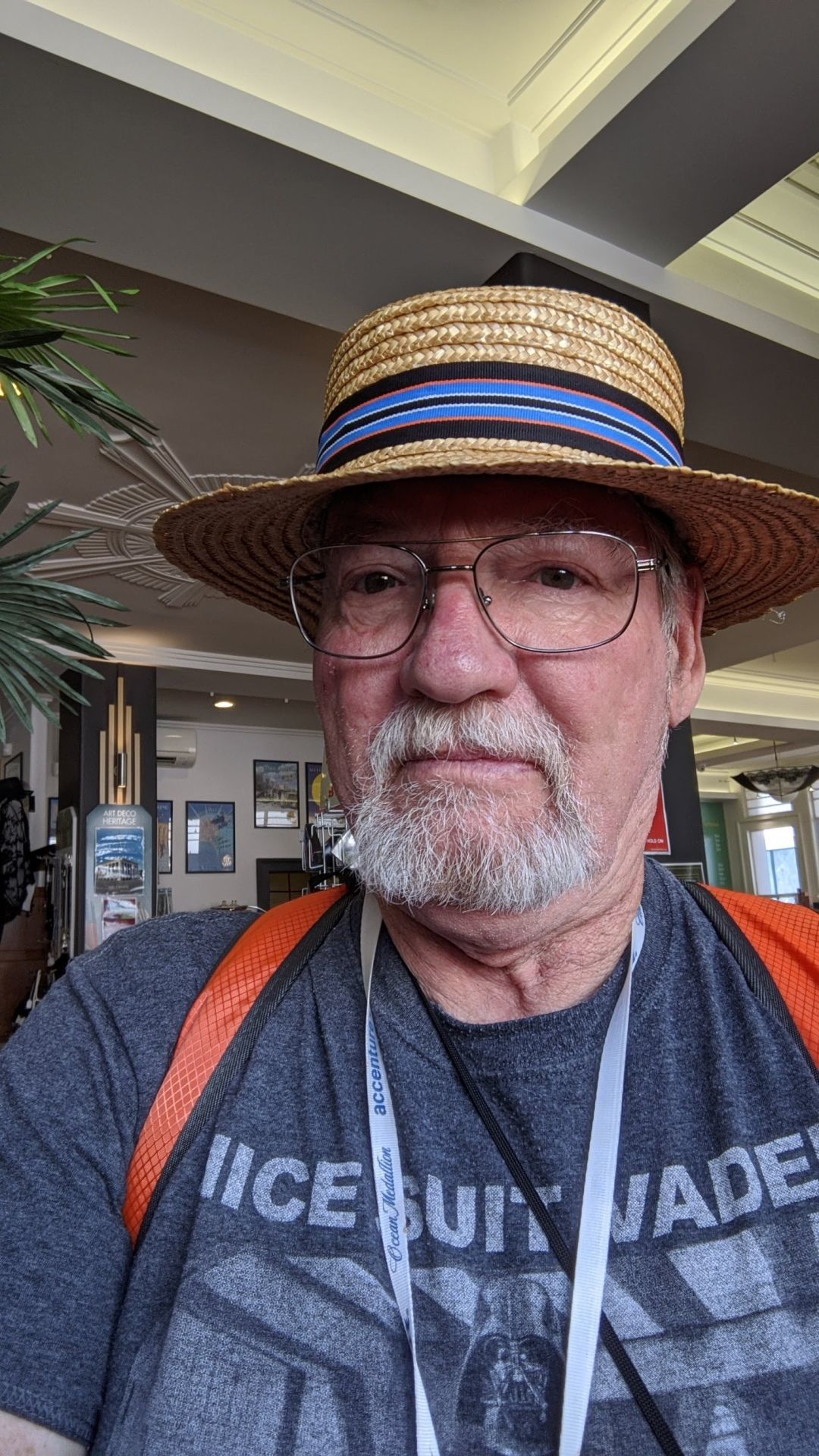 Bruce and Lona Baumann in Akaroa, New Zealand in March 2020.

Bruce Baumann and his wife Lona Baumann at their Roseburg home on Saturday.

Bruce Baumann in front of the Sydney Opera House during his March 2020 trip to Australia.

This 30th anniversay photo was taken of Lona and Bruce Baumann on the Princess Ruby in March 2020, during the trip where they contracted COVID-19.

Bruce and Lona Baumann’s 30th anniversary cruise to Australia and New Zealand didn’t turn out the way they planned.

Bruce Baumann caught COVID-19 on the Ruby Princess — an ill-fated cruise in which ultimately a third of the passengers would contract the disease.

Their nightmare vacation began pleasantly enough on March 4, when the Roseburg couple flew to Australia and spent four days there before embarking on the ship. At that time, they knew the Diamond Princess was in quarantine off the coast of Japan, with some of its passengers ill with COVID-19.

But they weren’t too worried about it.

What they didn’t know was that shortly before they boarded the Ruby Princess, passengers sick with COVID-19 had disembarked that ship.

They were just told there would be a slight delay. Bruce Baumann thinks a fast cleanup took place, but he’s not convinced it was enough. The delay lasted just two hours. There was no mention that passengers on the previous cruise were sick.

“It was a 13 day cruise and I think we made it to day 9 and the whole time they weren’t saying anything about that there was any problem. On the ship they were always encouraging you to eat and drink and be merry and enjoy the cruise to the fullest extent,” he said.

They did encourage frequent hand sanitizing and asked people to return to their rooms to use the bathroom instead of using the public restrooms.

“Then on day nine, we got to Napier, New Zealand. And I think we had to fill out a health questionnaire but we got off the ship, did like a land excursion tour type thing on a bus with 50 people on there, and walked around town and went sightseeing,” he said.

That was port four with three left to go on the itinerary. Then New Zealand forbid the ship to dock anymore in their country, so it returned to Sydney, Australia.

Unbeknownst to the Baumanns, some of their fellow passengers had fallen ill.

The ship docked in Sydney at 1 a.m. when most people were asleep.

“We didn’t know that we’d gotten in early, and we found out later they had offloaded the sick passengers in the middle of the night,” he said.

The cruise was abruptly cut short. Now, the passengers from countries outside Australia had to find their way home. They took crowded buses and crowded planes. Many of them were already infected but not yet showing symptoms. More than 900 people, about one-third of the 2,700 passengers from the Baumanns’ cruise, would ultimately fall ill.

“We found out later by watching the news that there was a lady on the ship that was from the United Kingdom that we had shared a hot tub with, and when she got home she was diagnosed with the virus — this is a week after we got off the ship we found that out,” Baumann said.

It can take a couple of weeks before the symptoms show, but the infected are contagious during that time. That’s one of the reasons COVID-19 can spread so quickly.

The Baumanns wanted to remain in Sydney, but the hotel canceled their reservations. They had to fly to Brisbane, which was packed and no one was social distancing. Some people they had been on the cruise with were in line next to them at the airport and collapsed where they were standing. The people who had collapsed were taken away by wheelchair.

After a couple of canceled flights, the Baumanns flew to Los Angeles and then Las Vegas. The Baumanns are “snowbirds” who spend winters in Arizona. They picked up their motor home and traveled to remote Quartzsite, Arizona.

They pulled into Quartzsite on March 23. That’s the day Bruce Baumann first started getting symptoms. He was short of breath, had a fever, chills and sweating. He lost his appetite, his sense of taste and smell, and he had “zero energy.”

“I mean, it was all I could do to take two or three steps to walk across from the couch to the dining room table in the RV or take 10 steps to go to the restroom,” he said. “Then once I was in there it took me about 20 minutes to get up enough energy to get up and yeah, it was pretty bad.”

He was pretty certain it was COVID-19. Lona Baumann tried desperately to get him treatment or a test — to no avail. The nearest hospital was 30 miles away, and she was told he wouldn’t get a test unless his breathing became so distressed he had to be hauled away by ambulance.

He toughed it out at first, but Lona Baumann contacted their doctor back home in Roseburg, and on April 7 they left Arizona, with Lona Baumann driving the RV for the first time in her life.

They walked into Aviva Health on two days later. He had a blood draw and a chest X-ray, but no swab test. On April 10, he went into the respiratory clinic and had an oximeter reading. Oximeters test the amount of oxygen in the blood. His oxygen level was quite low, measuring in the 80s (a reading 95 or above is good, and anything below the low-90s is a concern.)

He was rushed to the emergency room at CHI Mercy Medical Center by ambulance, where he was put on oxygen and given, finally, a swab test for COVID-19. He was allowed to go home, and five days later got the results of the test, saying he was positive for the disease.

Last week he was put on the recovered list. He said he’s back to about 90%.

“I still have, if I exert myself or talk a lot, I have a little shortness of breath,” he said.

His appetite and energy are back.

Bruce Baumann is 72, and diabetic with some heart issues, so he was at high risk. Still he said he wasn’t too worried because he’s not “the kind of person that freaks out.”

“I just kind of take it in stride,” he said.

Lona Baumann contracted COVID-19, too, and had some symptoms the same day as her husband. She got over her symptoms fairly quickly, but a recent antibody test confirmed she had caught and recovered from the disease.

The worst part of the whole ordeal, she said, was while they were stuck in Arizona.

“Seeing my loved one on the edge, that was totally terrifying, and not to be able to get help for him,” she said.

After the nearest doctor said testing was only available for those brought by ambulance to the hospital, she was advised to report his illness to the county and state health departments.

“Every time I called I was put on hold forever, so I never ended up being able to report it. I just ended up hanging up,” she said.

Driving the RV home was pretty scary too, but she had no choice, she said.

“We couldn’t bring the regular car because then we’d have to stop to use bathrooms and get food. With the RV at least we had our own self-contained isolation unit, so that was really the only safe way to get him home,” she said.

And she was too scared to stay in Arizona.

“I just felt like if I didn’t get him home, I didn’t know what would happen. I think sometimes being sick is way easier when it’s you and not watching somebody you love go through it,” she said.

“They’re going to be taking all kinds of precautions. I think it’ll be probably be OK,” Bruce Baumann said.

“When the coronavirus is gone, things should be back to normal,” Lona Baumann agreed.

There have been frequent commentators on here criticizing the local medical community, doctors, public health officials, and County leadership who have all been working together to respond to this COVID-19 Response. Despite the fact that Douglas County was one of the first in the State to offer testing; those that tested are not required to pay anything out of their pockets for the tests; have made access to tests for symptomatic individuals as simple as a doctor’s order; provide access to doctors for those individuals without a primary care physician; have provided daily updates to the public on the progress of their work; have performed contract tracing and successful epidemiology work which have resulted in just 24 positive cases with 22 recovered and only 1 active case currently residing in Douglas County. It is telling that the person in this article couldn’t get treated in Arizona, but was promptly and successfully treated in Douglas County. It is also telling that when the Governor convened an advisory panel of medical experts in the State to advise her on the COVID-19 response, she chose Douglas County’s Public Health Officer as one of eight individuals. Maybe these commentator’s characterizations about our community's collective response are not very accurate.