Education Secretary Betsy DeVos, with Vice President Mike Pence, speaks during a White House Coronavirus Task Force briefing at the Department of Education building Wednesday in Washington. President Trump is threatening to withdraw federal funding from public schools if they do not open in a normal fashion this fall. 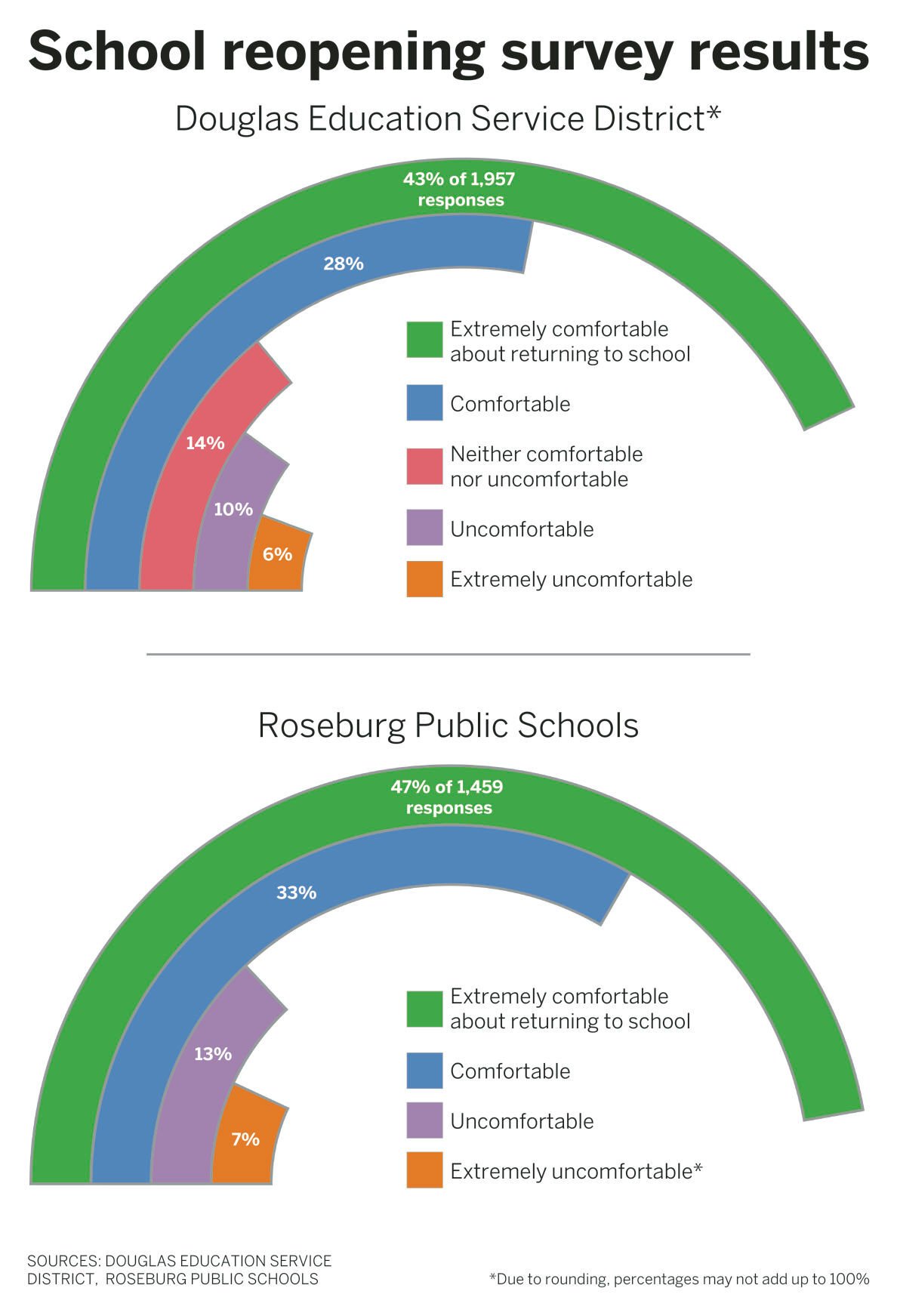 Education Secretary Betsy DeVos, with Vice President Mike Pence, speaks during a White House Coronavirus Task Force briefing at the Department of Education building Wednesday in Washington. President Trump is threatening to withdraw federal funding from public schools if they do not open in a normal fashion this fall.

Determined to reopen America’s schools, President Donald Trump threatened Wednesday to hold back federal money if school districts don’t bring their students back in the fall despite coronavirus worries.

It’s unclear at this point how this would impact Douglas County and Oregon schools and whether the three proposed instructional models would meet the president’s criteria for reopening schools and bringing students back into the classroom.

“The U.S. Department of Education has not contacted ODE regarding any revisions to current funding guidelines,” ODE spokesperson Marc Siegel said Thursday.

Roseburg Public Schools Superintendent Jared Cordon said, “Our priority is ensuring the health and safety of our kids, staff, and community while maintaining high-quality educational experiences for all kids.”

Oregon’s Department of Education allows schools and districts to come up with their own plans for reopening, which can be designed to best meet the need of a community. Schools have the option of on-site learning, distance learning or a hybrid between the two models.

“We understand and honor the importance of local voice and leadership. These individual plans will reflect the distinct strengths and needs of each district and community,” ODE Director Colt Gill said in an email Wednesday. “Reopening our schools will take cooperation from all Oregonians. It is our shared responsibility to keep all our community members safe by following public health guidance related to physical distancing, face coverings, and hygiene.”

Schools throughout Douglas County plan to have an option for virtual learning available for families that don’t feel safe going back to schools.

The schools will have to adhere to guidelines from state and local health authorities, which make it tough for some schools to return to their traditional format.

While most Douglas County schools are working on a plans to safely reopen for on-site learning, some schools are opting for hybrid learning.

“At this point, the guidance from ODE and OHA do not make a traditional reopening possible for our secondary schools given the guidance and restrictions on distancing and cohorting,” Cordon said. “As I said earlier, I expect there to be changes in the guidance as we near the start of school.”

Trump said guidelines from Centers for Disease Control and Prevention were impractical and expensive.

Shortly afterward, Vice President Mike Pence announced that the Centers for Disease Control and Prevention would be issuing new guidance next week “that will give all new tools to our schools.”

To reopen, all Oregon schools will have to submit an Operational Blueprint for Reentry by Aug. 15, which need to address eight essentials: public health protocols, facilities and school operations, response to outbreak, equity, instruction, family and community engagement, staffing and personnel, and mental, social, and emotional health. All plans will need to have the approval of the local health authority.

Oregon Department of Education and Oregon Health Authority released its initial guidance on June 10, which was updated June 30. Another update is expected to be released July 21.

Douglas Public Health Network staff have met with public school superintendents several times and will continue to consult with them throughout the summer.

“It’s going to be a great experiment when we start schools,” Douglas County Public Health Official Dr. Bob Dannenhoffer said two weeks ago. “In other countries that have done this, they have found that they can open up their elementary schools with little risk either for students or for the general population. I’m optimistic that opening schools will be successful.”

Douglas Public Health Network is still awaiting more guidance from the state to learn what metrics will be used to make changes once schools start. Thus far the guidance has mostly focused on creating smaller classes, screening students and staff, additional cleaning and face coverings for teachers.

Trump issued a veiled threat to CDC officials over their reopening guidelines, tweeting, “I will be meeting with them!!!”

Safety problems can be surmounted, he insisted, and reopening schools “is important for the children & families. May cut off funding if not open!”

Oregon Gov. Kate Brown responded to the tweet via her own social media account with, “Hmm maybe it’s just me, but when it comes to keeping children and educators safe, I actually like the idea of following ‘very tough’ guidelines from our country’s most trusted doctors and health experts.”

Trump did not say what funding he would pull, but Pence suggested at a coronavirus task force briefing that future COVID-19 relief bills could be tied to reopening schools as one way “to give states a strong incentive and encouragement to get kids back in school.”

On Twitter, Trump argued that countries including Germany, Denmark and Norway have reopened schools “with no problems.”

Germany did begin to reopen its schools in May, but in many cases students are taking turns going to school and studying at home for half the week — just the thing that administration officials have criticized. Authorities are aiming for classes to resume in close to normal fashion after the summer vacation.

Parents and community members in Douglas County overwhelmingly agreed that they are ready to get children back to school.

“The majority of respondents (81%) responded that they were most looking forward to their children being able to see their friends again,” Douglas Education Service District Assistant Superintendent Analicia Nicolson said. “Many respondents also looked forward to returning to a better work/life balance.”

Dannenhoffer is part of the Healthy Schools Reopening Council, which will advise the governor and the Oregon Department of Education as schools work toward reopening.

Following Tuesday’s meeting, Brown tweeted, “With the current rise in COVID-19 cases across Oregon, it is clear that we have our work cut out for us in figuring out how students, educators, and staff can return to classrooms safely this fall. Whether students can return to classrooms or not at the start of the school year is up to each and every one of us. If we continue to see cases rise, districts across the state will be forced to resort to extended periods of remote instruction throughout the school year. I don’t want to see that happen, but it is the reality we face. July can be a turning point. Oregonians must continue to wear face coverings and practice physical distancing or we could quickly find that a safe return to the classroom is beyond our reach.”

Trump made his threat of cutting federal funding a day after launching an all-out effort pressing state and local officials to reopen the nation’s schools and colleges this fall.

At a White House event Tuesday, health and education officials argued that keeping students out for the fall semester would pose greater health risks than any tied to the coronavirus.

Among those pushing for a fall reopening was CDC director Dr. Robert Redfield.

Redfield emphasized that his agency’s guidelines are only recommendations. “I want to make it very clear that what is not the intent of CDC’s guidelines is to be used as a rationale to keep schools closed,” he said at Wednesday’s coronavirus task force briefing, which was held at the Education Department.

The CDC’s guidance recommends that students and teachers wear masks whenever feasible, spread out desks, stagger schedules, eat meals in classrooms instead of the cafeteria and add physical barriers between bathroom sinks.

Trump did not clarify which of the guidelines he opposed. Pence did not indicate whether they are being revised in response to the president’s objections.

At Trump’s briefing, and a day earlier in a call with the nation’s governors, Education Secretary Betsy DeVos said anything less than a full reopening would be a failure for students and taxpayers. But some of the nation’s largest districts plan to bring back limited numbers of students for only a few days a week, saying it would be unsafe for all to return at once.

Trump said at the White House event on Tuesday, “We’re very much going to put pressure on governors and everybody else to open the schools.” He said that parents and children want schools to reopen and “it’s time to do it.”

But the president of the nation’s largest education union said Trump was more interested in scoring points for the November election than in keeping students safe.

“Trump has proven to be incapable of grasping that people are dying — that more than 130,000 Americans have already died,” said Lily Eskelsen García, president of the National Education Association. “Educators want nothing more than to be back in classrooms and on college campuses with our students, but we must do it in a way that keeps students, educators and communities safe.”

Trump accused Democrats of keeping schools closed so they could win the November election.

The Associated Press contributed to this report.