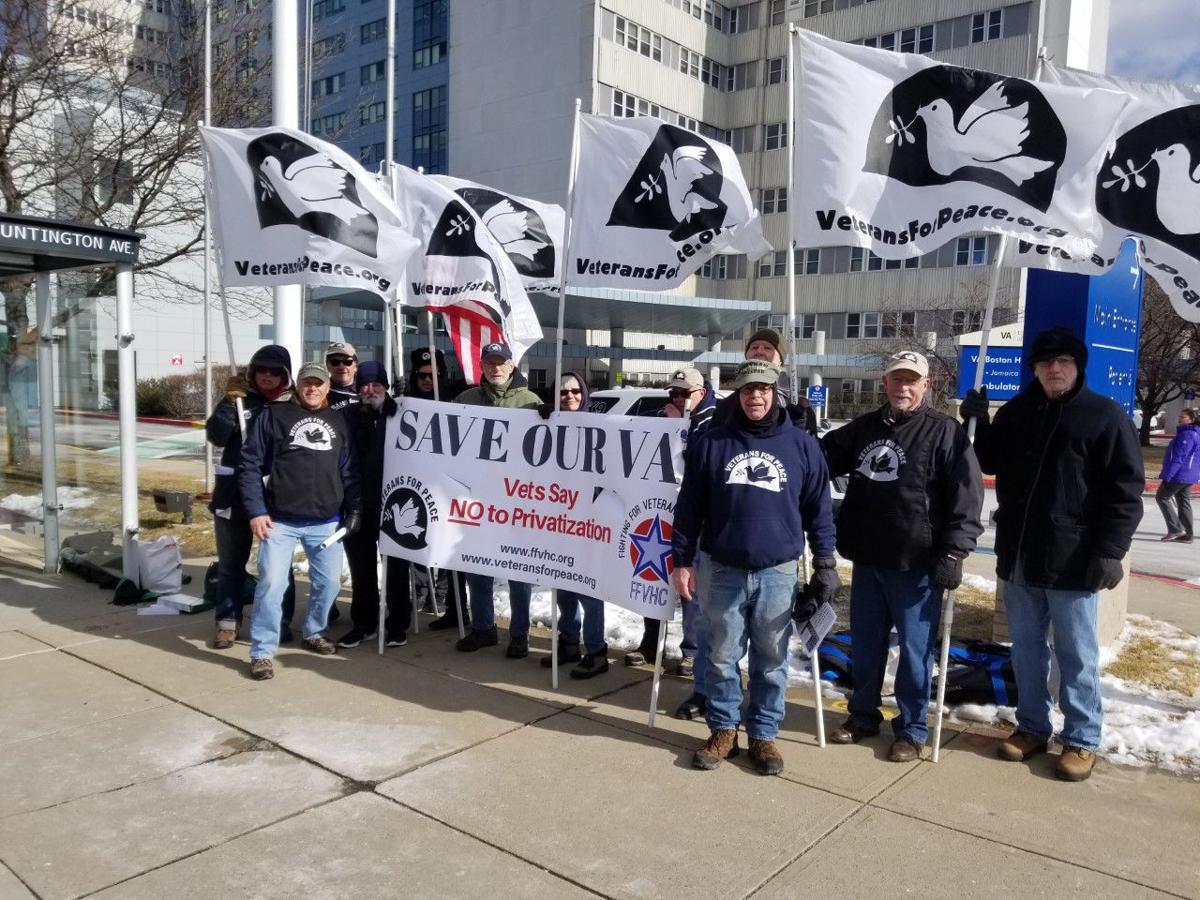 Veterans for Peace is staging actions around the country to educate the public about opposition to VA privatization.

Recent articles detailing the history of mismanagement at the Roseburg VA paint a sorry picture of our local facility. It’s a story that must be told, but it’s important to put the facts into context. Generalizing from the problems of individual facilities without providing context gives the impression that the system is broken, as some claim. However, we can’t make sweeping conclusions about the VA without comparing outcomes between it and other healthcare systems. When we do, it’s clear that both by objective measurements and patient satisfaction ratings, VA care is superior to that provided by the private sector.

It’s important to recognize that our scandal-obsessed media has distorted our impression of the VA, because some politicians and their deep-pocketed benefactors have taken advantage of the negative coverage to target the VA for privatization. Using such stories to justify diverting funds to the private sector, investors in for-profit healthcare like the Koch brothers can reap enormous profits. Under the guise of increasing veteran “choice,” these privateers and their political lackeys have already outsourced 40 percent of patient visits and are pushing for more.

It may seem a good idea to give veterans the option of getting help outside the VA, given claims that waiting times are excessive. That is, until you look at the facts. While it is true that at some facilities (including Roseburg) waiting times are longer than in the private sector, nationwide this isn’t the case. Where it does happen, as in Roseburg, the problem is more due to a lack of providers than mismanagement. This is partly because medical care providers at the VA are grossly underpaid relative to their counterparts elsewhere, another result of chronic underfunding of the VA by Congress.

There are currently nearly 50,000 unfilled positions at the VA nationwide. Is it any wonder that there are problems? VA facilities in places like Roseburg are chronically understaffed, as anyone who has been a primary care patient there for any time knows. As much as we love this place, it is just a little too rural for most doctors. Given that, the low pay and the unfairly poor reputation of the VA, it’s hard to staff the facility with providers and administrators who can choose to live almost anywhere. The solution to the problems of the VA isn’t diverting funds, but increasing the proportion spent within the system, including making salaries competitive.

Some people think that you can partially privatize the VA by letting it specialize in orthopedics and mental health, areas where it clearly has capabilities lacking in the private sector. What they don’t realize is that the greatest feature of the VA is that primary care is seamlessly integrated with specialty care. Primary care doctors know how to screen for stress-related conditions, traumatic brain injury, Agent Orange-related problems and other issues specific to vets. They can easily get them help with their specialist colleagues. The VA also has case managers and social workers whose jobs include making sure that these handoffs are as easy and reliable as possible, which is unheard of in for-profit medicine. This is especially critical with the aging VA population, those with head injuries and those who have trouble tracking appointments because of trauma-related problems with memory and concentration.

VA doctors know how to work with vets. In contrast, a recent Rand Corporation study of the ability of private care providers to work with veterans found that only about one in three providers met the study’s “minimum threshold for familiarity with military culture” and only one in five routinely asked if their patients had a military background.

In view of these facts, it’s obvious that privatizing even some of the functions of the VA will damage a well-coordinated system. The money spent on outsourcing beyond that which is necessary to provide good service could be better spent staffing the VA. Not only is the need greater, but the money goes much further. With its drug formulary and ability to negotiate prices, and without the profit incentive and other expenses unique to private care, the VA can deliver comprehensive services that would cost far more in the private sector, if such a system existed.

Fortunately, there is a growing effort to raise awareness of this attempt to milk the taxpayers for providing inadequate care to veterans. Veterans Fighting for Healthcare (www.ffvhc.org) is a growing national coalition whose mission is to organize to oppose privatization of the VA. As one of its most active partners, Veterans for Peace is staging actions around the country to educate the public about this problem. If you agree that veterans have earned the best medical care available in the US, join VFP of Douglas County when we gather at 4 p.m. on March 15 at the front gate of the VA on Garden Valley Road.

Rick Staggenborg is a retired VA psychiatrist and the chapter contact for VFP Chapter 181 in Douglas County. He can be reached at 541-217-8044.

Nonprofits need our support amid pandemic

The truth about the Crater Lake Wilderness Proposal

Wilderness offers no protection for forests or climate

Wildlife preservation is our best tool against fires

The proposed Crater Lake Wilderness: A dangerous road to disaster and exclusion

Why protect lands in the Crater Lake Wilderness Proposal?

Nonprofits need our support amid pandemic

The truth about the Crater Lake Wilderness Proposal

Wilderness offers no protection for forests or climate

Staggenborg has a distorted conception of reality. He, like all "psychiatrists working for the American government must conform his worldview to that of the founders of his profession, the Frankfort School, or be ousted. The VA no incentive to cure its patients. A private doctor makes more money with more patients. If he produces good outcomes, the word gets around and he becomes sought after; he can, then, charge more money and develope a higher class of patients. VA doctors, on the other hand, get paid the same for having 100 patients as they do for having 10 patients. Thus, the inexorable structures of human nature tend to guide the VA doctor to an indifferent attitude toward patients.

It isn't necessarily a case of private versus government run facilities. The people in charge need to be responsive to employees and customers. Most private entities survive by delivering a quality service at a decent price. Competition helps to ensure that customers receive the best results. How many government run programs are friendly, timely and cost efficient?

I find that comment a little confusing. What exactly do you mean when you say that it isn't about private vs government-run facilities, then go on to imply that private facilities are better?

At any rate, you are ignoring the fact that despite some inefficiencies, the overall cost of any given service at the VA is less than the private sector (for the reasons cited in the article), and the VA delivers a product far superior to that which the private sector can, which is more important.

I meant that it isn't a private verses government run facility problem it appears to be more of a people problem. It is the quality of those people in charge that can cause problems or find solutions to problems. Most people have had a boss who makes their work lives unpleasant to say the least. People are needed that are compassionate and listen to workers and customers. Most government run facilities are not known for being cost effective. Competition generally keeps cost down and customer satisfaction up. I will try not to make a blanket statement by saying that one is always superior to the other like you did. There are private facilities that are more cost effective, timely and efficient and there are probably government run facilities that are more cost effective also. Making a blanket statement one way or the other is foolish. It depends on the facility in question. I made on observation that most government run programs are not known for being timely, cost effective or efficient. When a government program is the only game in town there is not a real effort or incentive to be a good steward to the people and for the people.

The whole system is corrupted by a belief in a profit/loss business model. There are some things that should NEVER be done for "profit" such as, medical care, education, prisons...etc. If you remove the profit/loss incentive from the healthcare system then everyone benefits, not just those who benefit financially from an outdated and inhumane system.