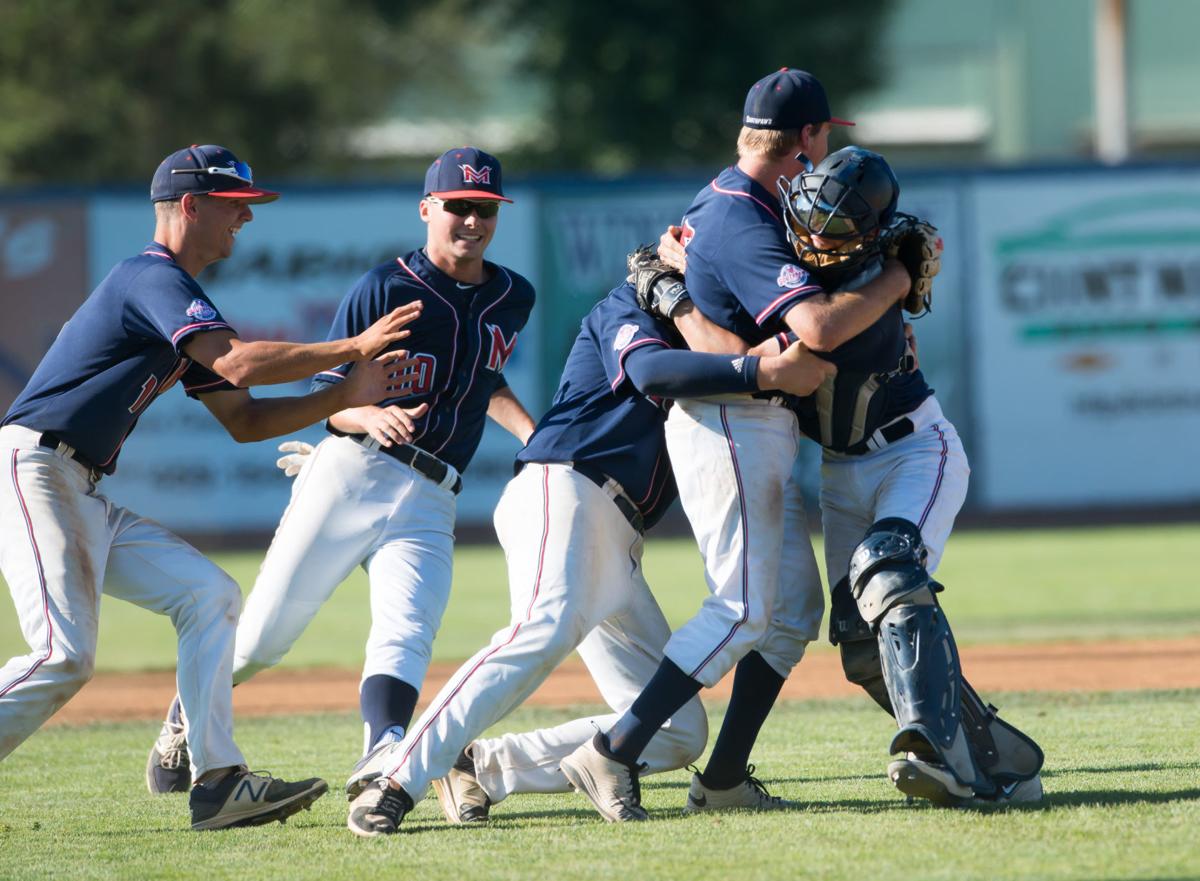 Mid-Valley players begin a dogpile after the final out of the American Legion AAA state tournament championship game at Roseburg’s Legion Field in August. Roseburg stepped in to host when a scheduling conflict arose in Klamath Falls. Mid-Valley won the final game, but fielded an ineligible player and the Medford Mustangs advanced to the regional tournament. 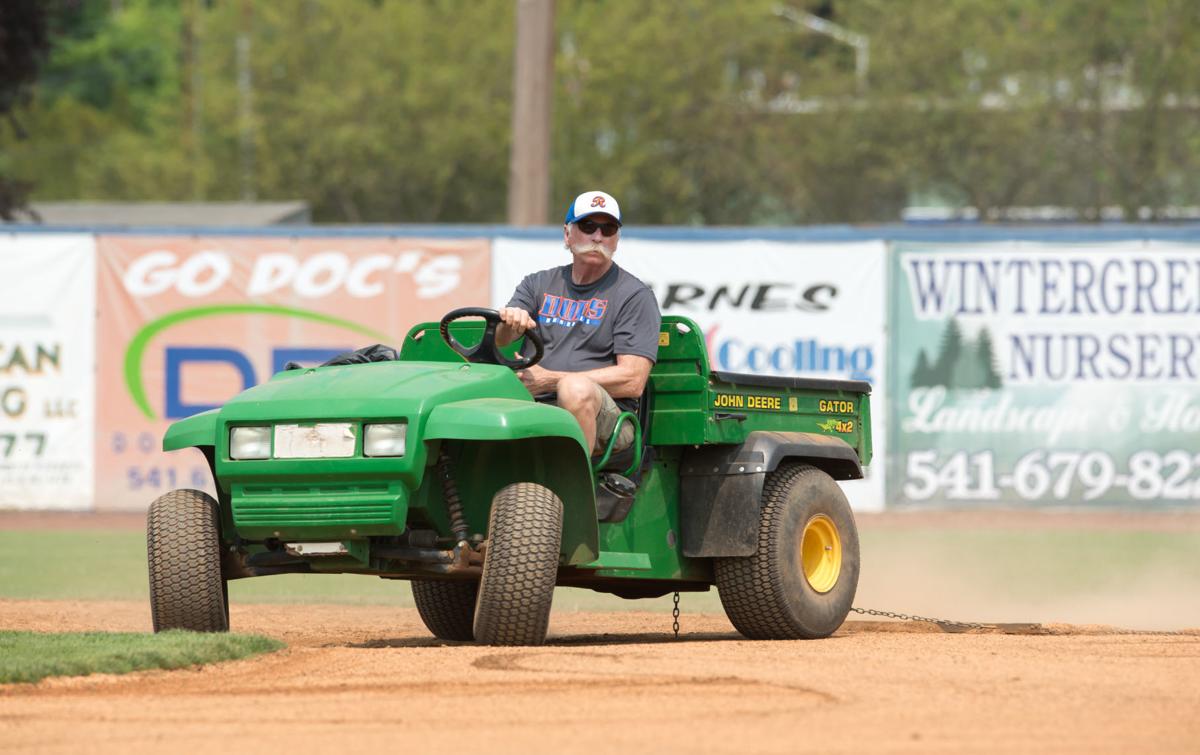 Roseburg American Legion commisioner Tom Donegan drags the infield dirt between games of the AAA state tournament at Legion Field in July. An artificial turf project is about $215,000 away from becoming reality for the facility.

Mid-Valley players begin a dogpile after the final out of the American Legion AAA state tournament championship game at Roseburg’s Legion Field in August. Roseburg stepped in to host when a scheduling conflict arose in Klamath Falls. Mid-Valley won the final game, but fielded an ineligible player and the Medford Mustangs advanced to the regional tournament.

Roseburg American Legion commisioner Tom Donegan drags the infield dirt between games of the AAA state tournament at Legion Field in July. An artificial turf project is about $215,000 away from becoming reality for the facility.

Artificial turf at Roseburg’s Legion Field is getting closer to reality.

Dr. Stewart’s Amreican Legion baseball commissioners have been working since 2017 to raise funds to replace the grass playing surface at the ballpark located in the city-owned Stewart Park.

They’re figuratively in the bottom of the seventh with bases loaded and nobody out.

The in-kind donations deal with removing the current surface, subsurface removal and laying of a new gravel subsurface, according to Admire.

Admire said the Legion has applied for a major grant that could cover the remaining amount, although the fund-raising effort has also slated an alumni/community event at the Danny Lang Center on the Umpqua Community College campus in Winchester on Dec. 7.

UCC has revived its baseball program and plans to begin play in the fall of 2019, creating a sixth tenant for the ballpark. Umpqua coach Jeremiah Robbins — who coached the Docs for two years in the first decade of this century — will also be the Dr. Stewart’s coach this summer.

“Every week we’re a little bit better, a little bit closer (to our goal),” long-time Legion commissioner Tom Donegan said. “It seems like the finish line gets pushed out a little further away, but it’s happening.”

Baseball isn’t expected to be the sole beneficiary of having turf installed. Other organizations have inquired about using the facility in the offseason and been turned away in the past; once turf is installed use of the facility can increase year round.

Admire and Donegan are both concerned with getting the project underway as soon as possible, primarily to avoid inclement weather that could drag out the excavation and removal process.

Starting the excavation the first week of December would be almost ideal to Admire. High school baseball teams can begin tryouts and full practices on Feb. 25, 2019.

The reception at the Danny Lang Center is intended to be an opportunity for donors and possible donors to connect more closely with the project.

“The fund-raiser is a college and Legion alumni reach out, and to kind of do a kickoff to reach out to the community at this point,” Admire said. ‘We have a grant that we’re waiting on that will hopefully get us to that mark so we can begin.”

Naming rights for the field, both batting circles, both dugouts and the press box have been sold in six-year blocks, giving the Legion program a long-term revenue stream to help with other facility upgrades and to offset the eventual replacement of the turf.

Umpqua Valley Christian is one of the biggest donors to the fundraising effort, helping bring in about $250,000 for the project.

“It’s huge for us, absolutely,” Admire said. “They were in a position of either developing their own place, but the coaches and the donors realize the benefits of (being at Legion Field), and we made some concessions — we agreed to a 15 years guaranteed use of the field — that was one of those concessions that they had asked for.

“It benefits both of us. If you look at the facilities, 800 covered seats, bathrooms, concessions, you will never find one like Legion Field. This was a great compromise. I’m glad that they came to us with that idea.”

Legion Field has been used by Umpqua Valley Christian and Roseburg High during the spring for years, while the Class AAA Docs and two Class A Legion teams have been the summer-time tenants. Umpqua is already using the field for practice this fall with its first class of recruits; the Riverhawks will be in full action in the spring of 2020 for their first Northwest Athletic Conference action in 35 years.

“We couldn’t have done it without (UCC athletic director) Craig Jackson, (UCC board chair) Steve Loosley and (UCC vice chair) Guy Kennerly — their financial smarts and fundraising experience, it’s been a big benefit to the finance committee,” Admire said. “It’s been a team effort, and that’s what it needs to be.”

Legion Field hosted the Oregon American Legion Class AAA state championship tournament last summer; likely the final games to be played on grass at the ballpark. With artificial turf in place, Legion Field could become a long-term home to that tournament, as well as host high school tournaments when the season begins in March.

Aaron Yost is a sports reporter for The News-Review he can be reached at 541-957-4219 or by email at ayost@nrtoday.com. Follow him on Twitter @aaron_yost.

Umpqua's season right around the corner

Turf at Legion Field getting closer to reality

Umpqua's season right around the corner