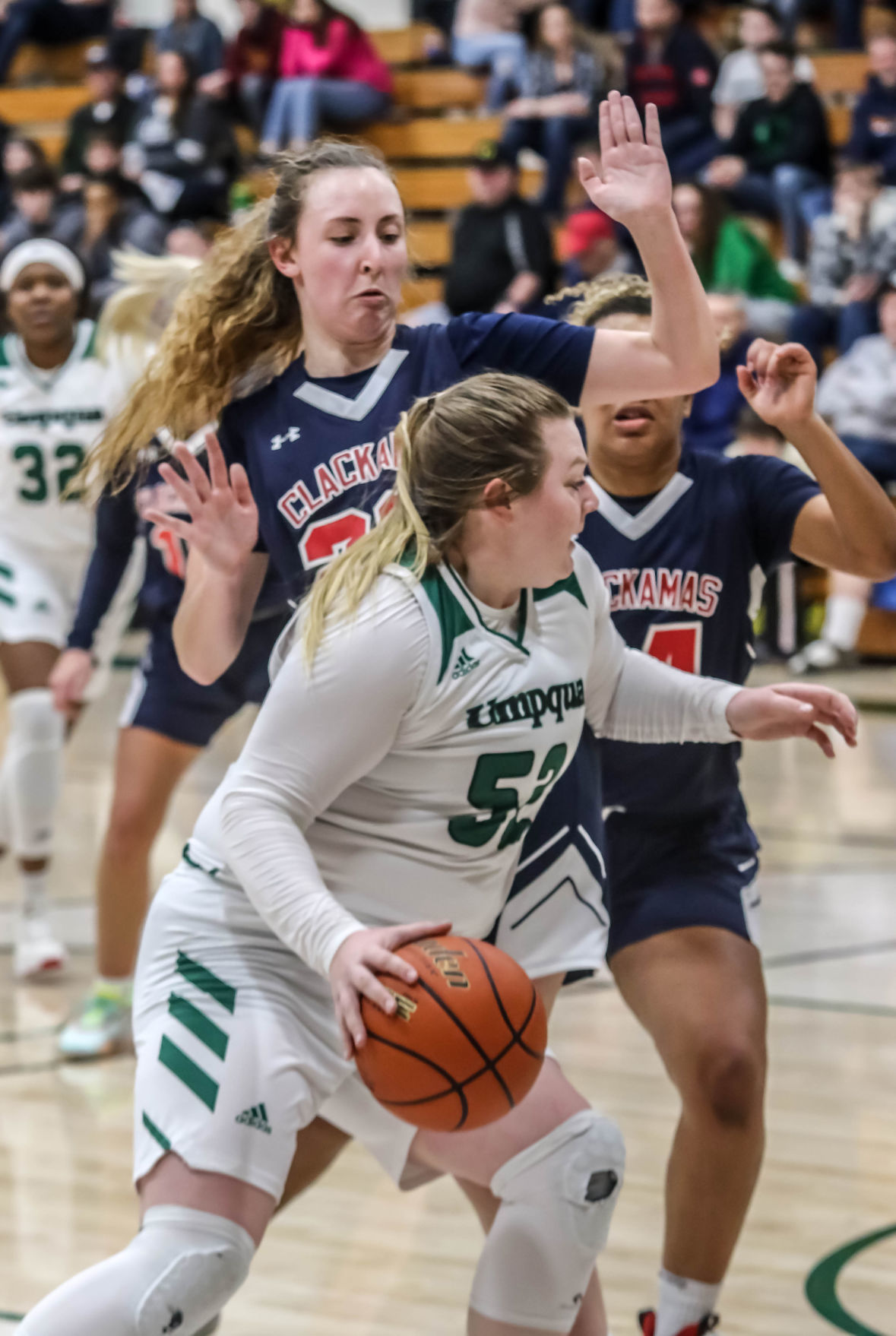 Umpqua’s Darian Mitchell drives to the basket in the second half during a South Region game against Clackamas on Feb. 29 in Winchester. 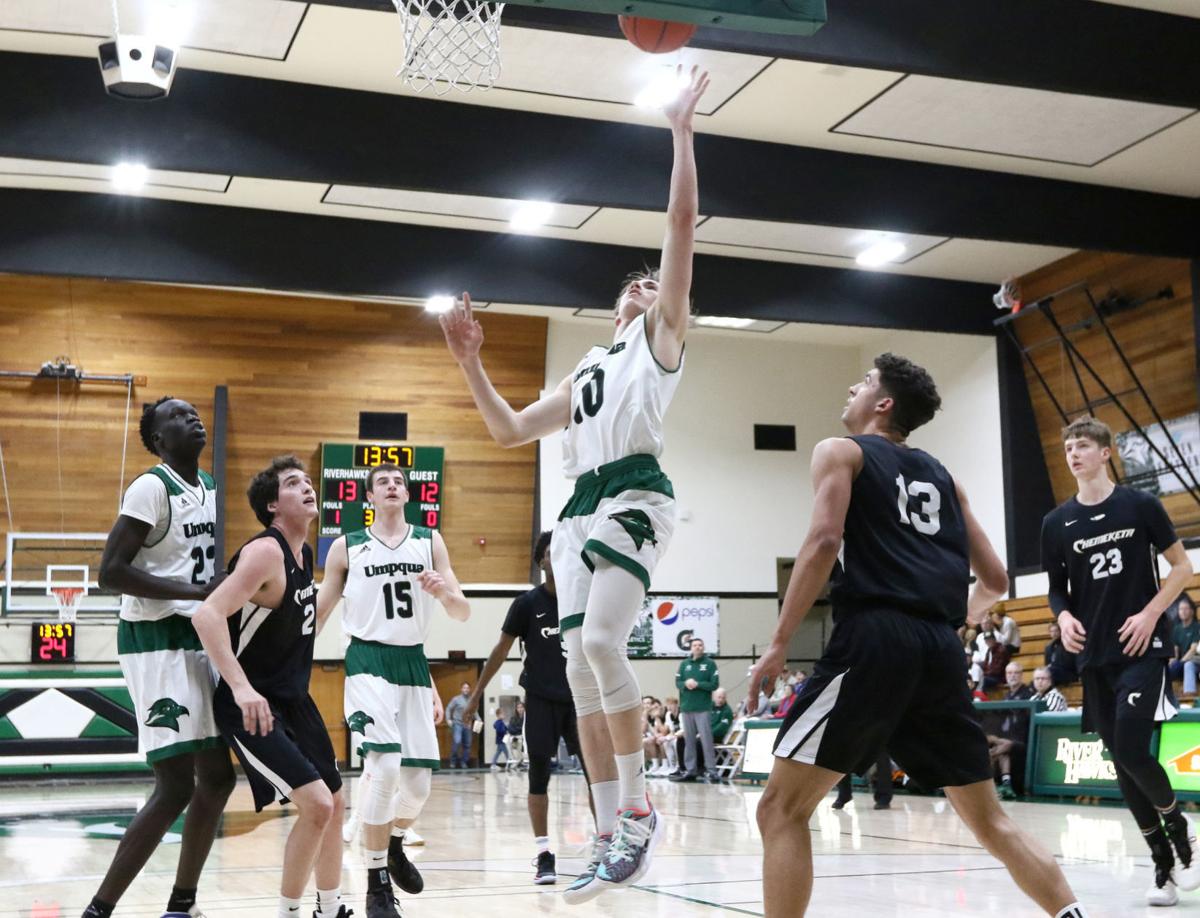 Umpqua’s Cody Fredrickson scores against Chemeketa during their South Region game on Feb. 22 in Winchester.

Umpqua’s Darian Mitchell drives to the basket in the second half during a South Region game against Clackamas on Feb. 29 in Winchester.

Umpqua’s Cody Fredrickson scores against Chemeketa during their South Region game on Feb. 22 in Winchester.

The Riverhawks just have to wait longer to play them.

Both tournaments, which were scheduled to be played over back-to-back weekends in Washington at Everett Community College, were moved to Oregon after the Everett campus was closed Thursday as Snohomish County health officials confirmed a case of the novel COVID-19 coronavirus.

The entire men’s tournament will be played at Clackamas Community College, beginning Thursday.

UCC’s women learned the tournament was suspended shortly before they were scheduled to take the court against Everett at 2 p.m.

“I was upset,” UCC guard Lainey Rincon said. “Worried to not know what was going to happen. But I’m glad they got it all figured out and we’re going to play.”

Now Umpqua, the tournament favorite, will have to win four games in four days to capture its first NWAC championship since 2000.

“I think everybody is over it. We came back and practiced on Saturday,” Umpqua coach Dave Stricklin said. “The whole mindset of this group all year is just to take things as they are, I don’t think anybody’s too worried about it.

“Nobody has had four games in four days all year — not us, not anybody. It’s really hard to be at the top of your game against good teams four straight days ... you have to assume there will be one game you won’t be at your best. The team that wins the whole thing will be the team that finds a way to win it even if they don’t play well that one game.”

Is it a mental refocus for the Riverhawks?

“It’s pretty big,” Rincon said. “We were preparing for two games at a time, now we have to prepare for four. You don’t know exactly who you’re going to be playing next.

“It’s going to be hard for most of the teams, having to possibly play four games in a row. We have a lot of girls who have been pushing themselves all season and I think we’re ready.”

Boske said, “We have more time to prepare, but it’s going to be a four-day tournament and that makes it a little more difficult. Now we’re at two sites we’re going to be more familiar with, so that’s a good thing. I feel pretty confident because we have a deep bench.”

The Everett-Umpqua winner will play North Idaho (18-10) at 3 p.m. Friday in the quarterfinals. North Idaho won its tournament opener, so it will be rested.

“The game plan is still the same. Work hard and play our game,” Boske said.

The Umpqua men hadn’t departed town yet when they heard the tournaments were suspended. The Riverhawks were scheduled to play at 4 p.m. Saturday.

“It’s pretty big, actually,” UCC coach Daniel Leeworthy replied, when asked about the mental frame of his team. “We were a little lost for a couple of days in practice, because we didn’t know when or if the tournament was going to happen. Getting refocused today will be huge for us.

“Hopefully we get to play four games in four days, and mentally and physically I think we feel fresh. We’re going to need everyone on the roster to play and contribute. We’re excited to play in Oregon, that’s a plus for us.”

The Riverhawks have played at Clackamas once this season, beating the No. 1 Cougars 102-96 in a South Region game. Clackamas won the league title, one game ahead of Umpqua.

“Our all out focus is on Treasure Valley,” Leeworthy said.

The Treasure Valley-Umpqua winner plays the Grays Harbor-Everett winner at 5 p.m. Friday in the quarterfinals.