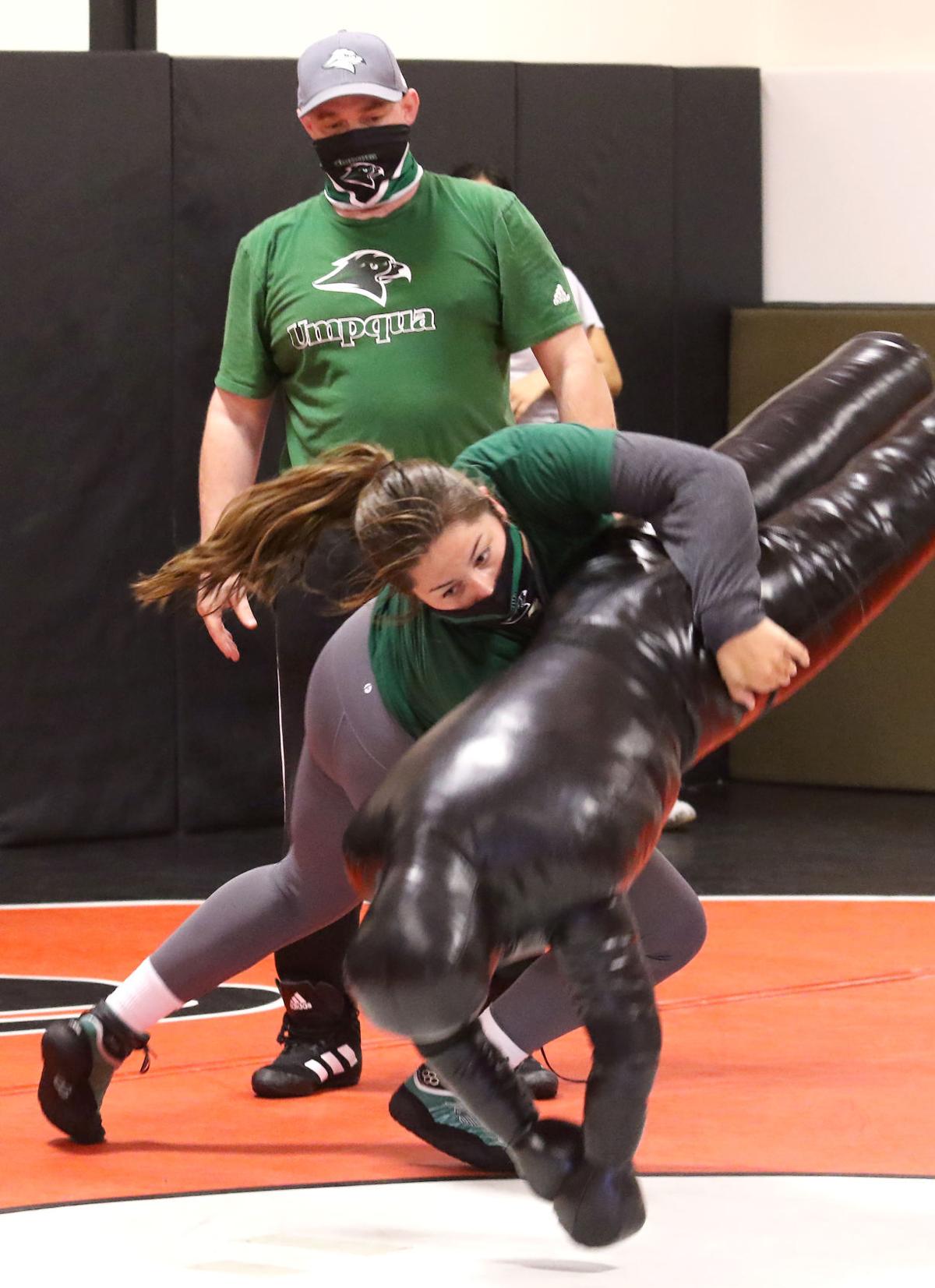 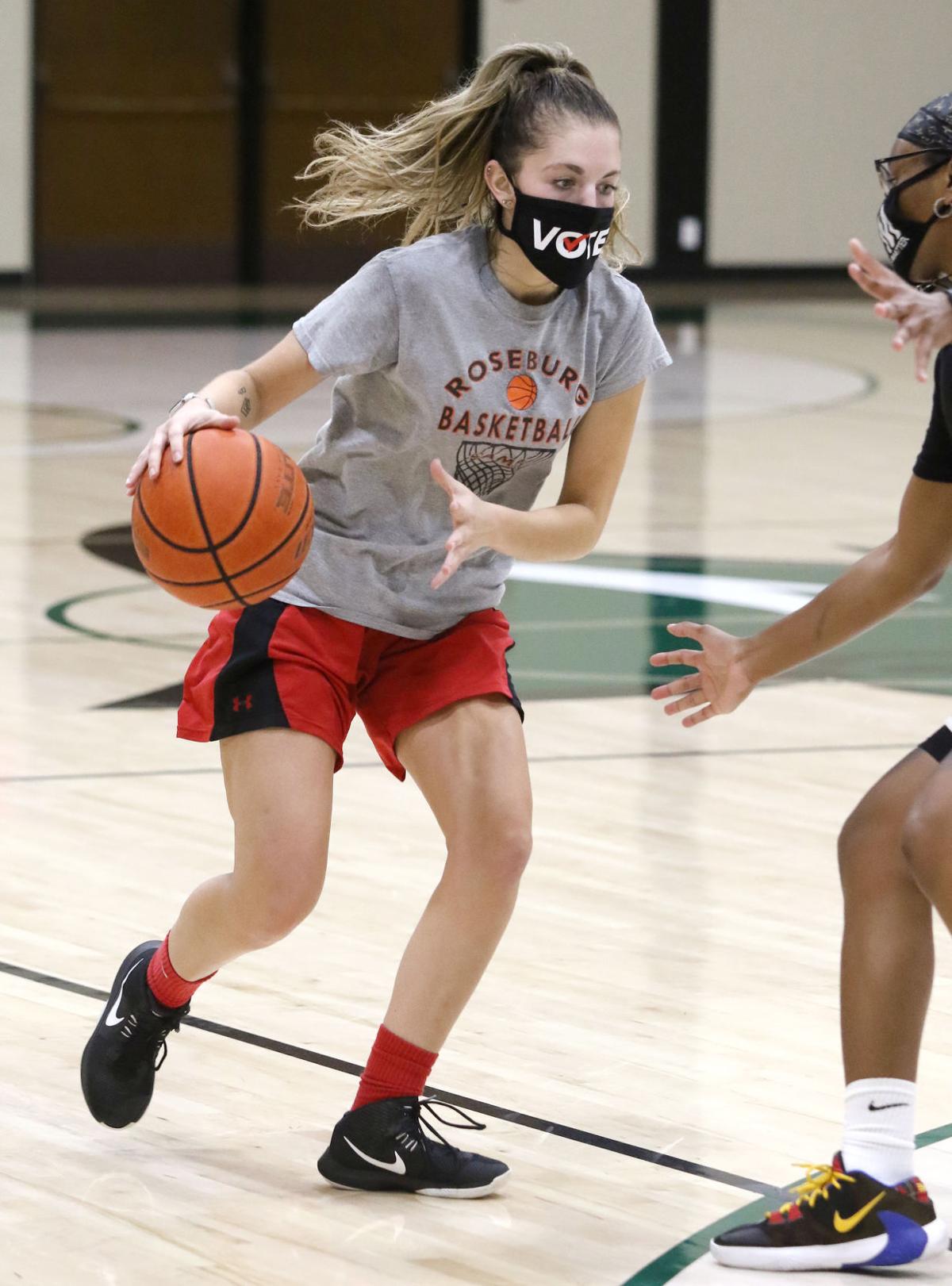 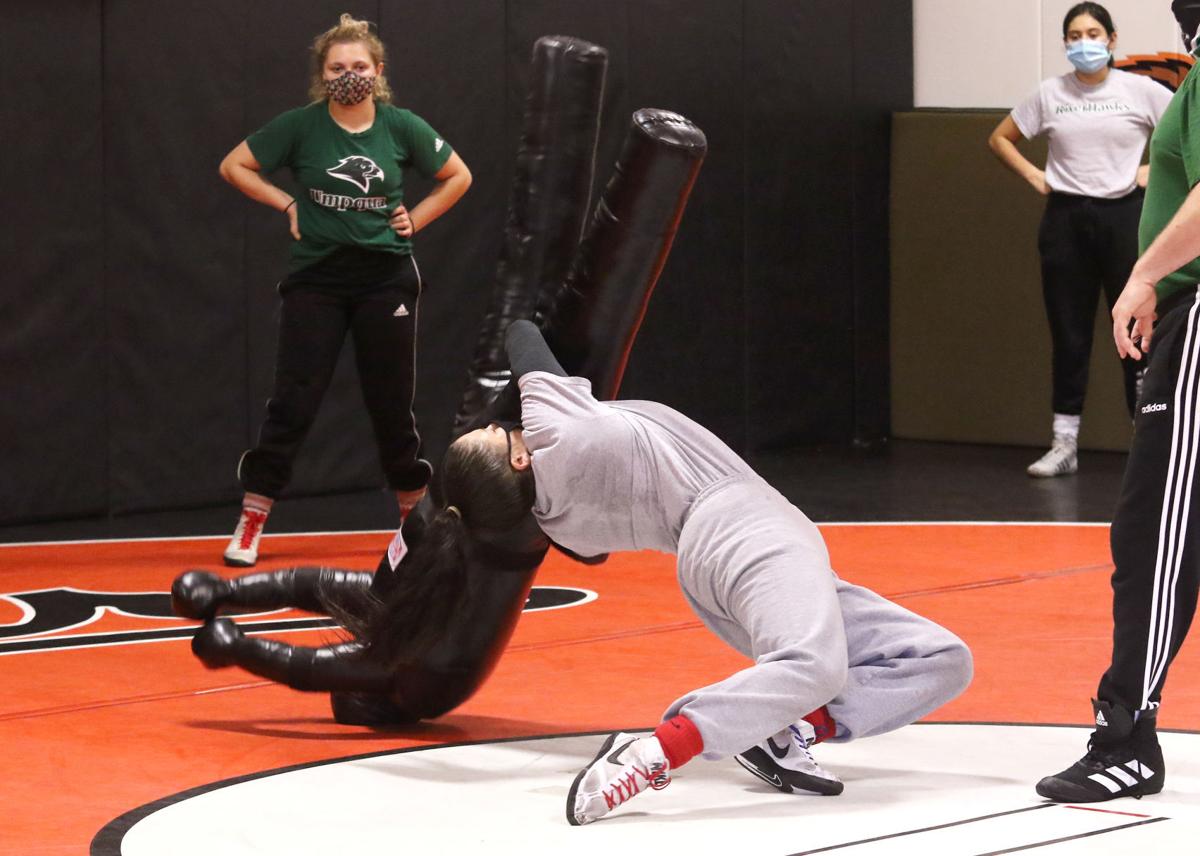 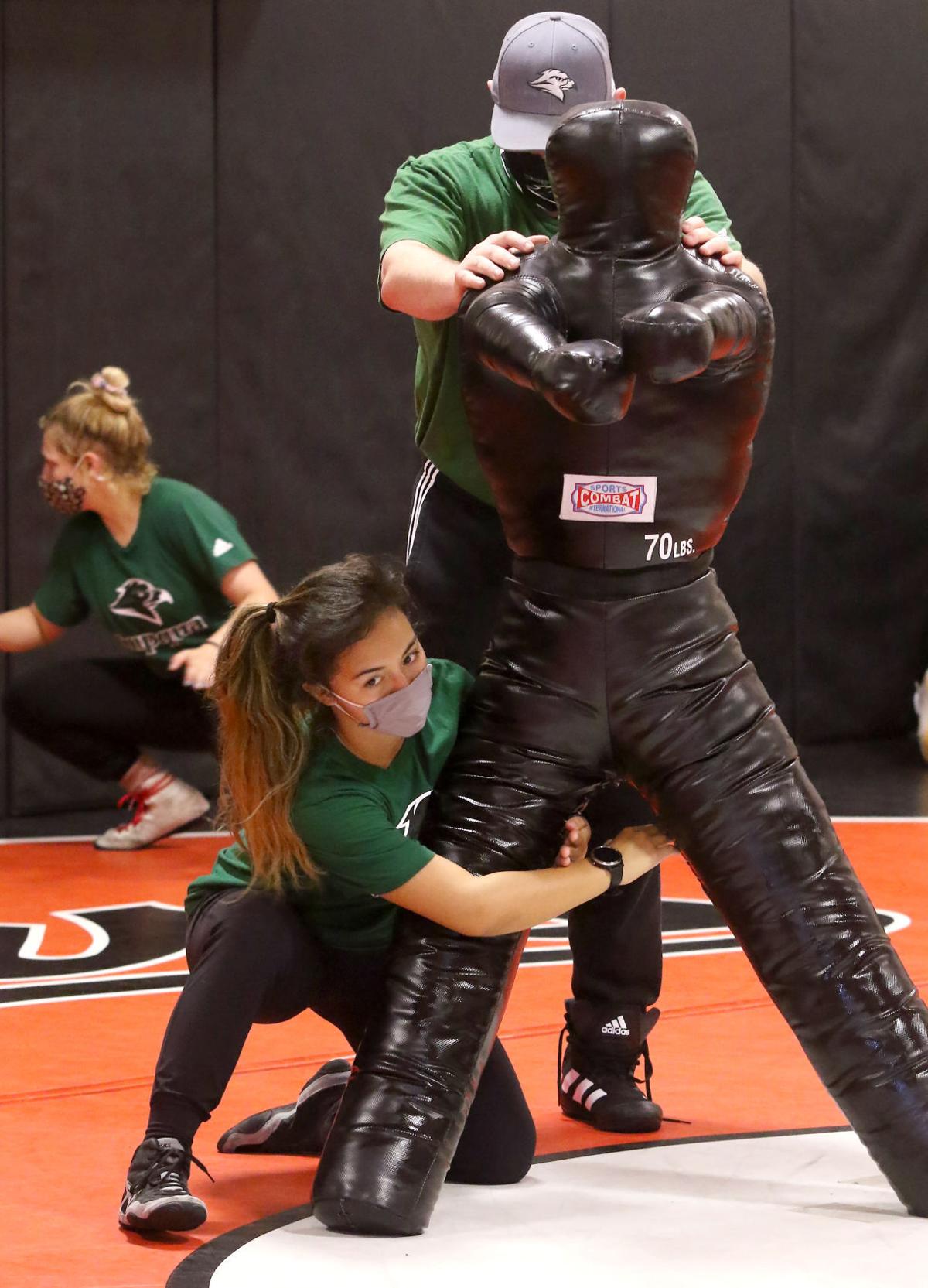 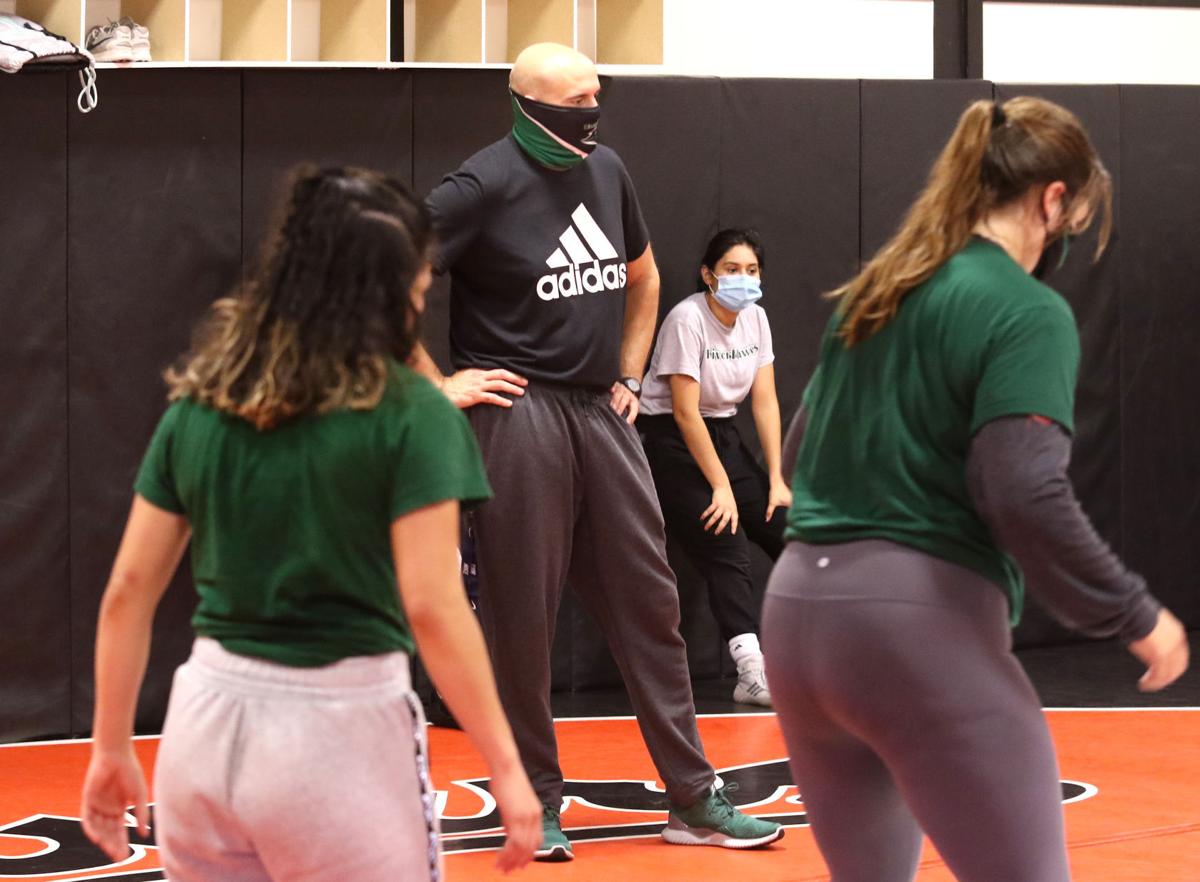 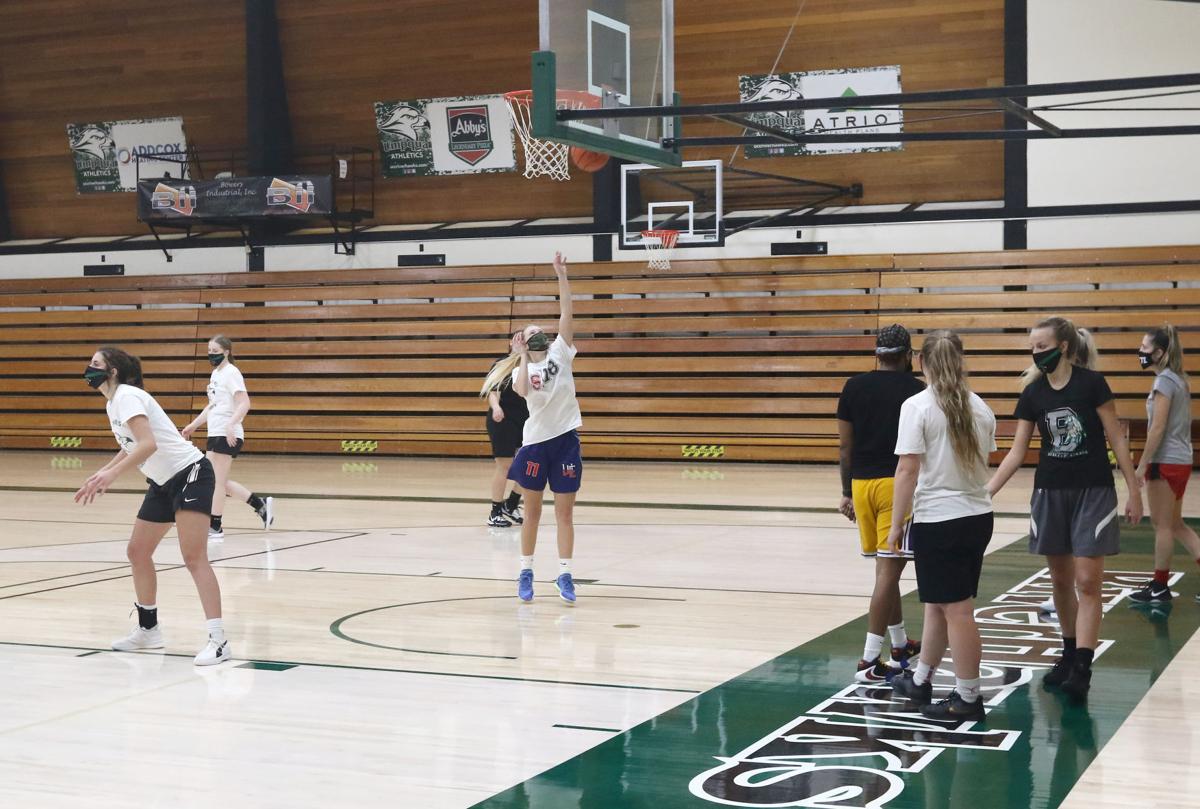 The Umpqua Community College women’s basketball team practices Tuesday at UCC. Most of UCC’s athletic teams have begun practicing — with restrictions on physical contact and full-on competition — even though for most the seasons won’t begin for three months. 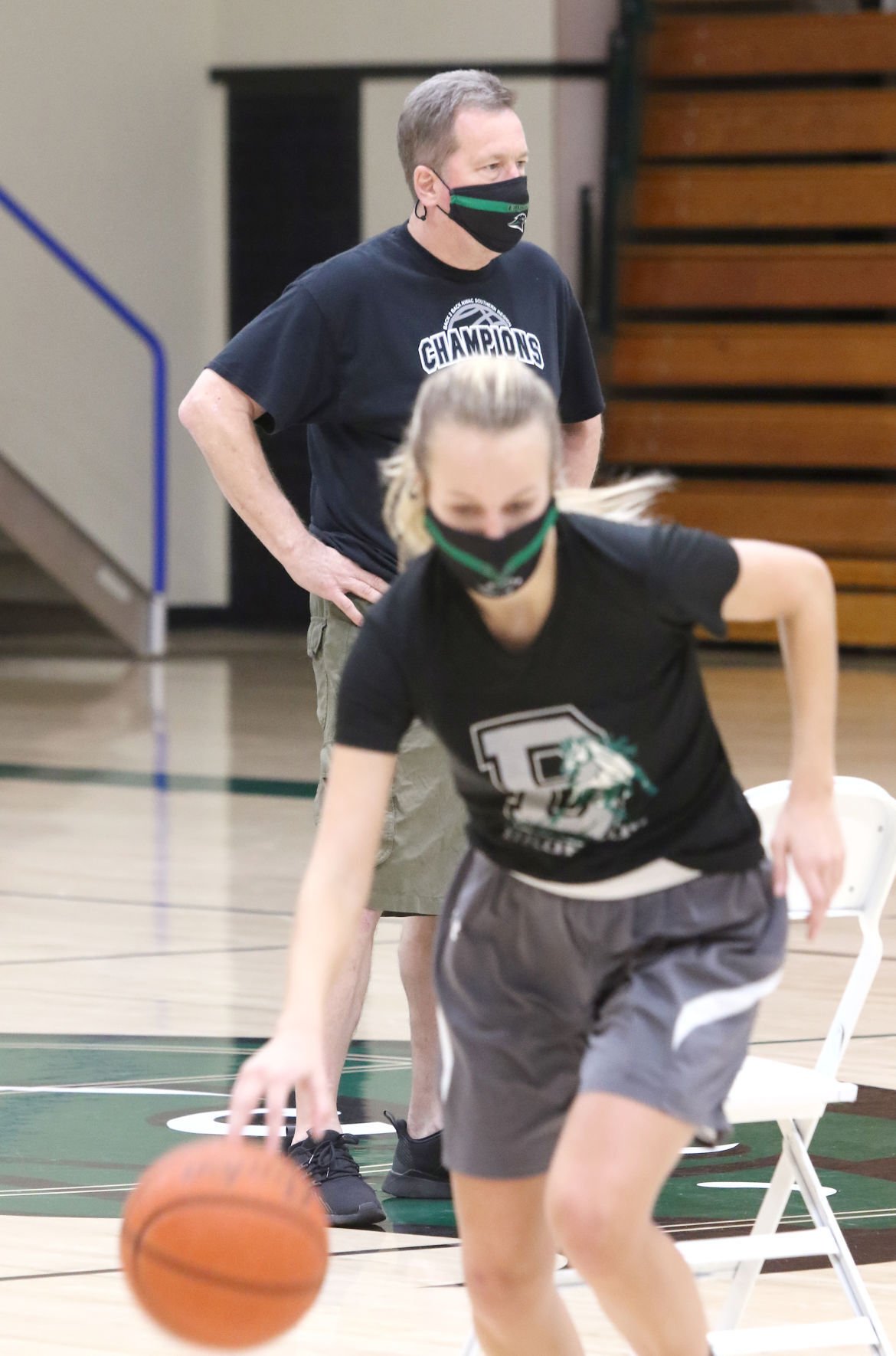 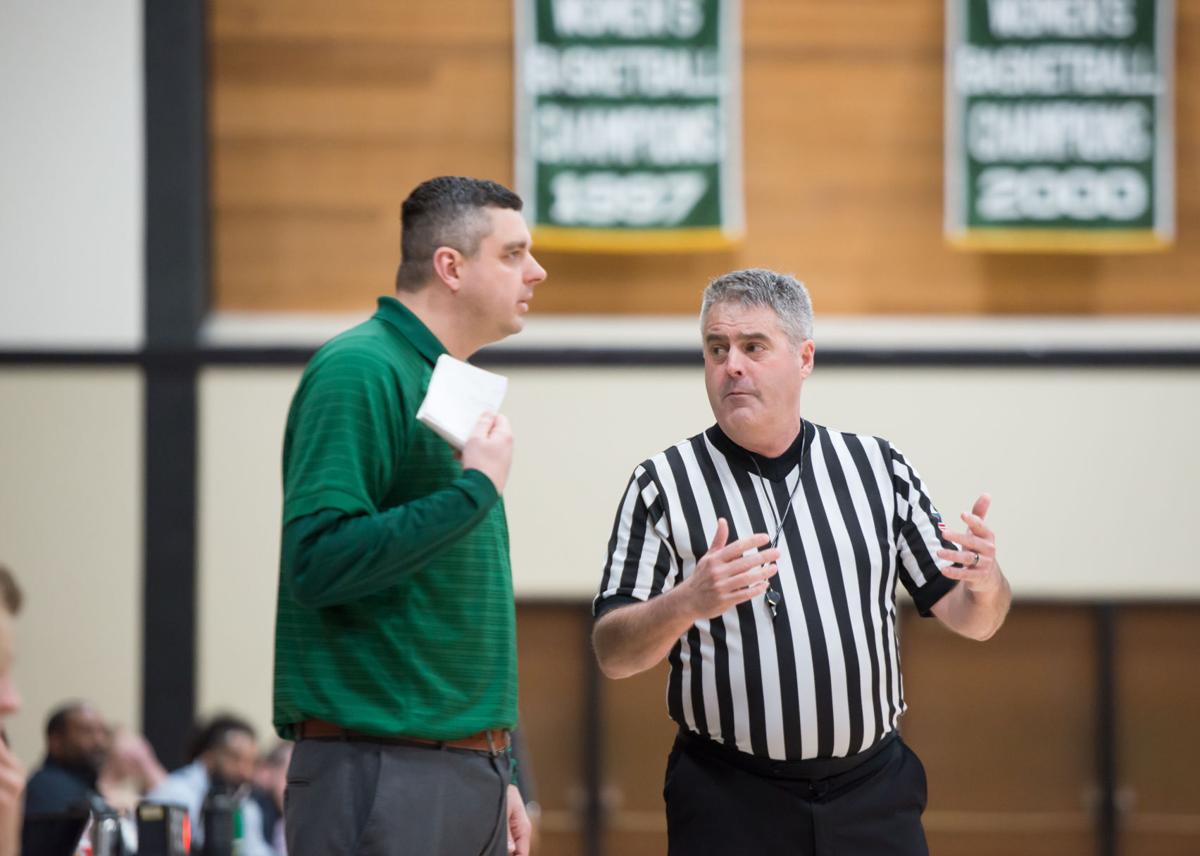 Umpqua men’s basketball coach Daniel Leeworthy says ‘we can’t play any live basketball, but we’re just bonding together as a team and trying to get to know each other better. It’s baby steps right now.’

The Umpqua Community College women’s basketball team practices Tuesday at UCC. Most of UCC’s athletic teams have begun practicing — with restrictions on physical contact and full-on competition — even though for most the seasons won’t begin for three months.

Umpqua men’s basketball coach Daniel Leeworthy says ‘we can’t play any live basketball, but we’re just bonding together as a team and trying to get to know each other better. It’s baby steps right now.’

WINCHESTER — The coronavirus pandemic has thrown a curve ball to Umpqua Community College’s athletic teams for the 2020-21 school year, with the start of most sports getting pushed back to the winter and spring academic quarters.

But the UCC squads have been working out this month, with restrictions.

The basketball and wrestling teams are practicing, but physical contact is prohibited under the “yellow phase” guidelines. Basketball can’t play five-on-five or scrimmage, and wrestlers can’t go live against each other in the mat room at this time.

Still, everybody agrees being around your team — even with games and meets not tentatively happening for over three months — and getting some practice in after a long layoff is a positive, considering what’s transpired this year.

“It’s so weird,” said Craig Jackson, the UCC women’s wrestling coach and athletic director. “Last year ended without seeing your kids again. Usually you have time to say goodbye and get some closure, but we haven’t had anybody on campus since March.

“Having people here again reminds you why you’re here doing the things you do. It’s nice to see the kids progress, and they need it, too. They’ve been cooped up and need some things to keep them busy and moving forward.”

COVID-19 canceled most of the spring sports season. The UCC baseball team was shut down after just 10 games, while the track and field team saw its season end after just one meet.

“There was a long break there,” UCC men’s basketball coach Daniel Leeworthy said. “It’s good to be back in the gym. It felt kind of strange to begin with ... but to hear the bounce of the ball and trying to get better as a team in every way we can has been important for us.”

“Honestly, I haven’t been in a real gym since March during the state (Class 3A) tournament,” said Kiersten Haines, a Sutherlin High School graduate who’s a freshman guard on the UCC women’s basketball team. “It’s nice being on an actual floor and getting the feel of the ball again.

“It’s nice to be in the gym with these girls, making friendships. I’m excited to be back playing and really excited to see what we do this year, if we get the chance.”

The Umpqua basketball teams both turned in outstanding 2019-20 seasons before COVID-19 prevented them from competing for Northwest Athletic Conference tournament championships.

The top-ranked women were favored to win their first NWAC title since 2000 under Dave Stricklin but didn’t get an opportunity to prove it, finishing 29-0 overall.

“I think we’re all just working really hard,” said Fallon Hanson, who’s the lone sophomore for the UCC women after transferring from Corban University. “We know that we’re a young team, but I haven’t seen anyone slacking. We all have the same goal and mindset, which is really cool. Everyone is working as hard as they can, trying to get to the next level.”

Stricklin, beginning his 26th season as head coach, is working with a brand new squad this year. Everybody wears a face covering during practice. The restrictions make it tough for Stricklin to get a feel for his team in the early stages.

“We’re doing a lot of shooting and conditioning, and a little bit of passing,” Stricklin said. “We can do some fastbreak drills, but zero contact. As far as actual playing, we can’t do it yet.

“At some point, we hope we can start actually playing. We’ll get a better idea of how well everybody fits into the big puzzle.”

Haines says the expectations remain the same for the program.

“It’s always eyes on the prize,” she said. “We always shoot for the stars, and have a legacy to keep.”

Leeworthy lost some key players off his men’s team that finished 25-4 and was considered a contender for the NWAC championship.

“The anticipation is definitely high,” said Isaac Lungren, a returning sophomore. “We want to finish what we started last year. That’s obviously the ultimate goal again in year two. There’s some unfinished business that we didn’t get to accomplish, and that’s 100 percent a motivational factor, for sure.

“I think we’ll be pretty good this year. We have a bunch of guys who are really skilled and can shoot well. We have guys who can run and get up the floor. We’ll be a competitive team, especially if we play to our strengths.”

Jared Bagley, a 20-year-old freshman out of Logan (Utah) High School, likes what he sees so far from the Riverhawks.

“It’s been really good. It’s been a little different obviously because we’re wearing masks and can’t do full contact practices, but it’s been awesome,” Bagley said. “Everybody’s bought in (to the system). We’re working really hard and it’s been really fun to be a part of it.

“The biggest thing I love about this team is we’re unselfish. I think we’ll be able to compete for a championship.”

Leeworthy is beginning his eighth year as head coach.

“We’re focusing on trying to be as cohesive as possible,” he said. “We can’t play any live basketball, but we’re just bonding together as a team and trying to get to know each other better. It’s baby steps right now.”

Lacy Pinard is in her eighth year as head volleyball coach. Her team normally would’ve opened its season in late August, but won’t play its first match until 2021.

“This is a whole new game (having the season moved back),” Pinard said. “Our focus is on class time and training time. We’re doing a lot of drills and conditioning. I’m loving this group and the chemistry is great, but we’ll take it one day at a time.”

The Riverhawks have three returning sophomores in Morgan Johnson, Breez Hansen and Katelyn Crawford. All are from Roseburg.

The basketball and volleyball teams will play league-only schedules.

The wrestling teams are focusing on individual drills, but can’t engage in the one-on-one contact that’s so important for them.

“The benefit for us starting later in the season is we have a lot more time to get stronger and in shape,” Jackson said. “With as many newcomers as we have, the main focus is lifting and conditioning. As far as wrestling in the room, we can do footwork and balance type of stuff but that’s about it.”

The UCC cross country teams are practicing, but won’t have a meet until after the holiday break. The obstacle course racing team had its first competition last weekend in Bend.

The baseball team has taken advantage of the pleasant weather to get some valuable work in outdoors on the turf at Bill Gray Stadium at Champion Car Wash Field. Head coach Jeremiah Robbins and his staff have been working with 48 players and are able to hold scrimmages.

“We’re considered a non-contact sport and are doing typical fall ball,” Robbins said. “It’s been awesome getting outside, moving around and seeing live pitching. Having a normal practice feel is refreshing.”