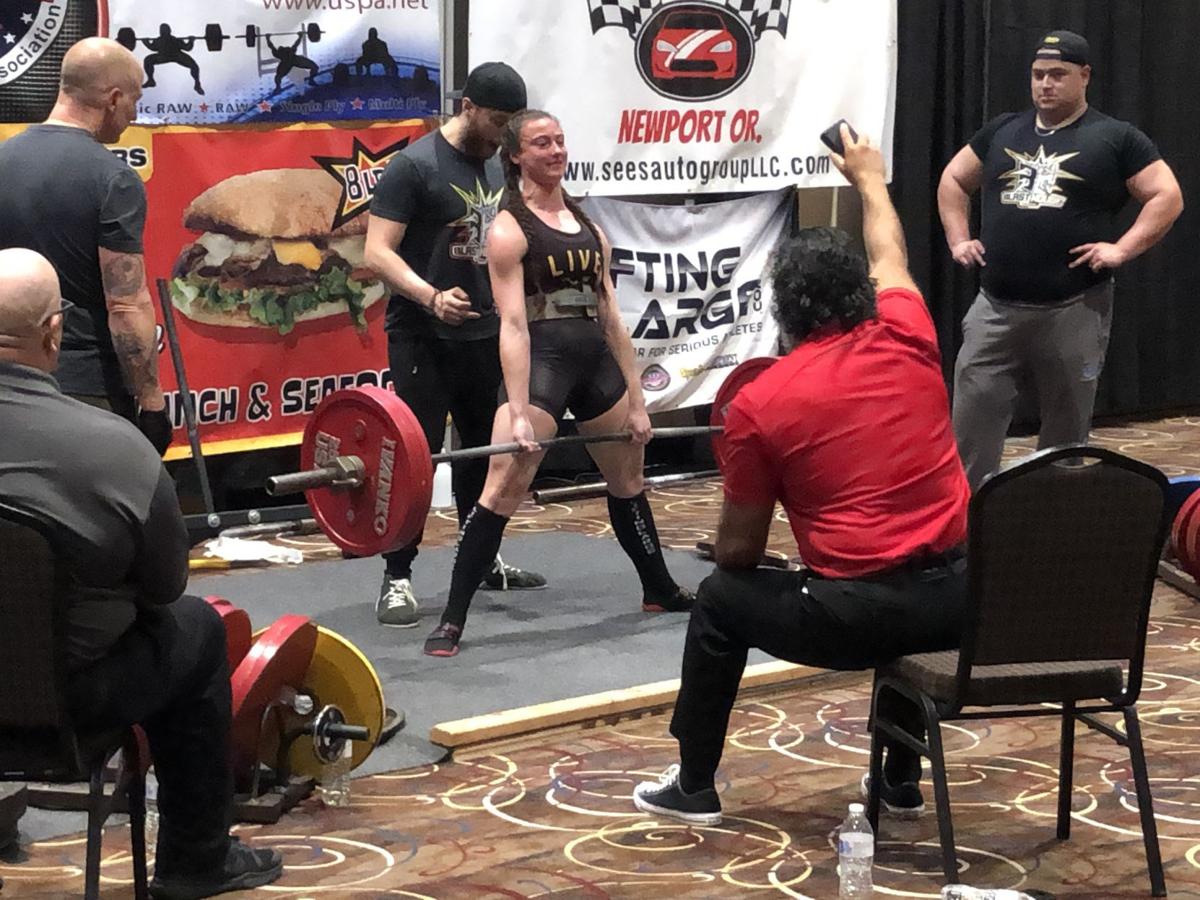 Kily Gilbert competes in the deadlift event during the USPA Drug Tested Oregon State Championships on March 14 at Chinook Winds Casino and Resort in Lincoln City. Gilbert, a 2015 graduate of Roseburg High School, broke the national record for the Junior Women 56K class with a lift of 385.8 pounds. 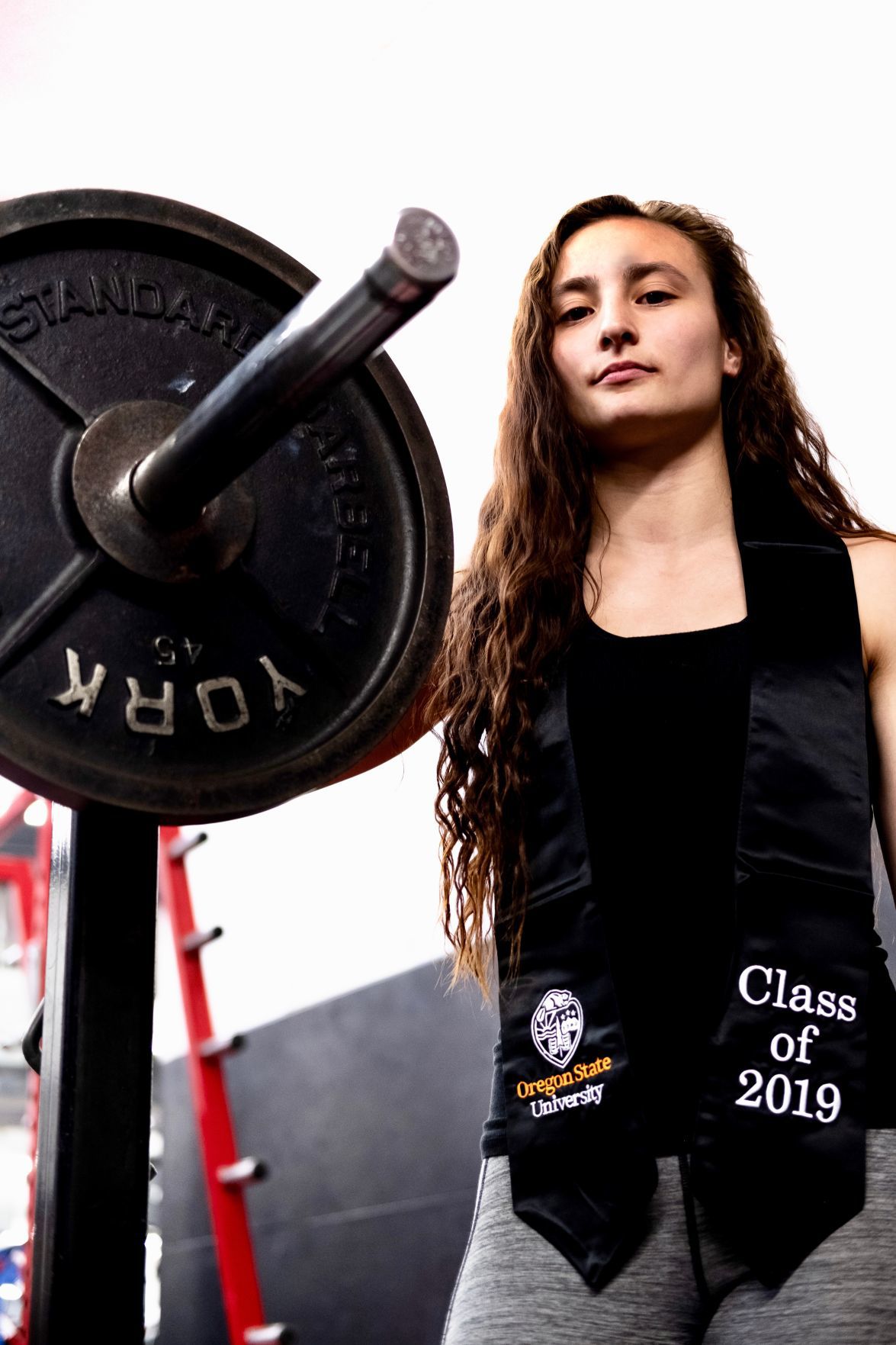 Kily Gilbert obtained a Bachelor of Science degree in kinesiology from Oregon State University in 2019 and is currently working on a master’s degree in athletic training. 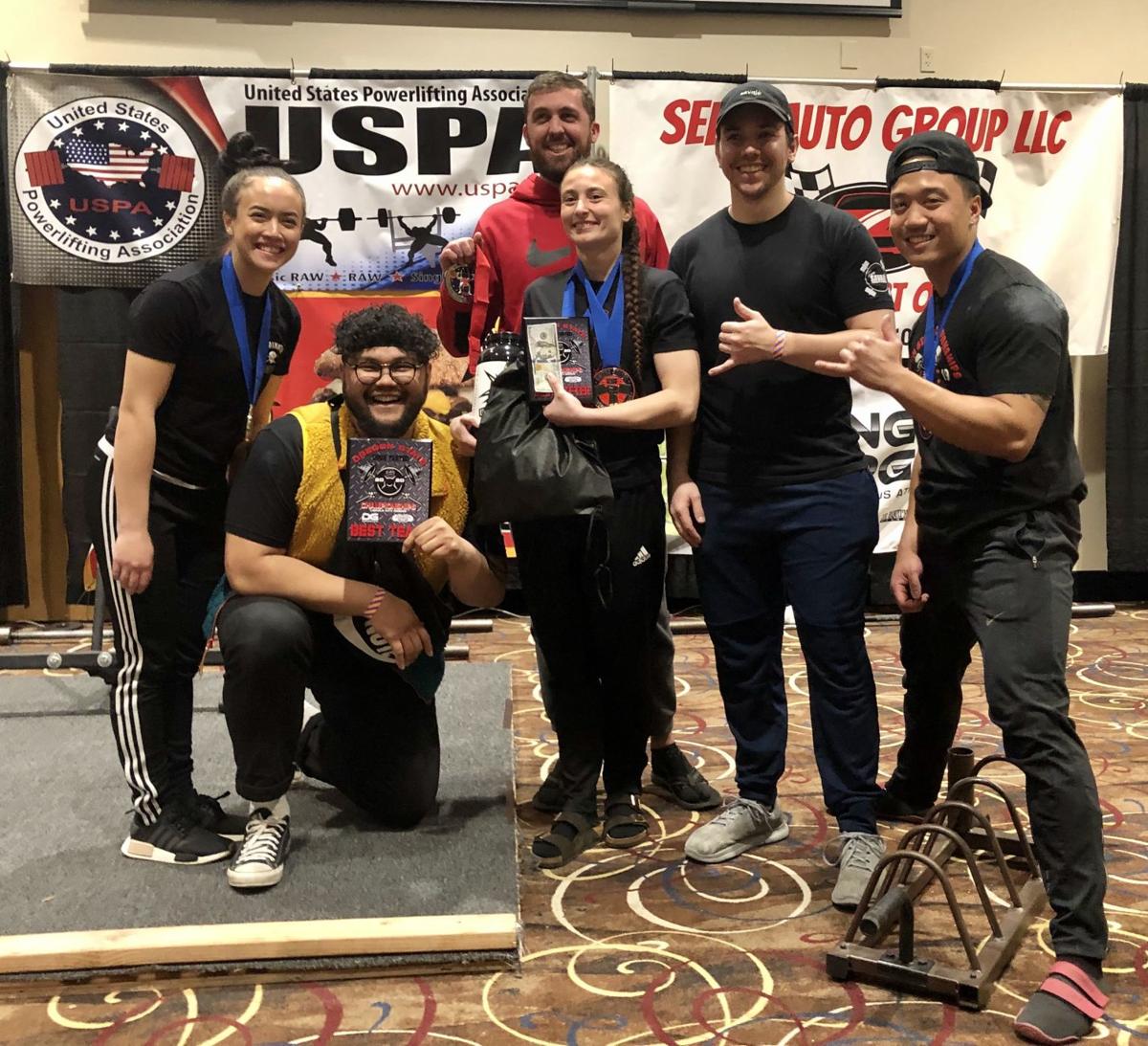 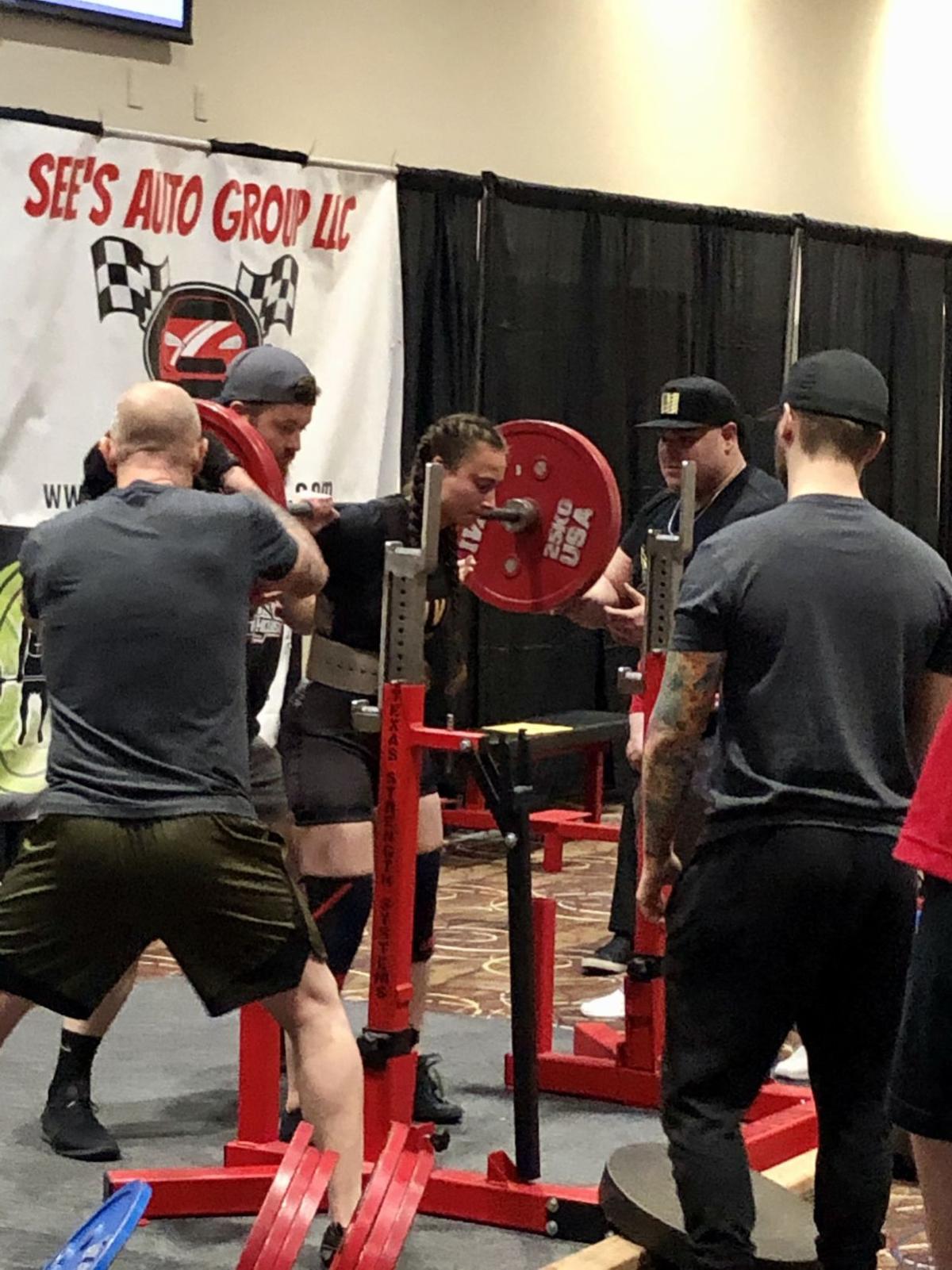 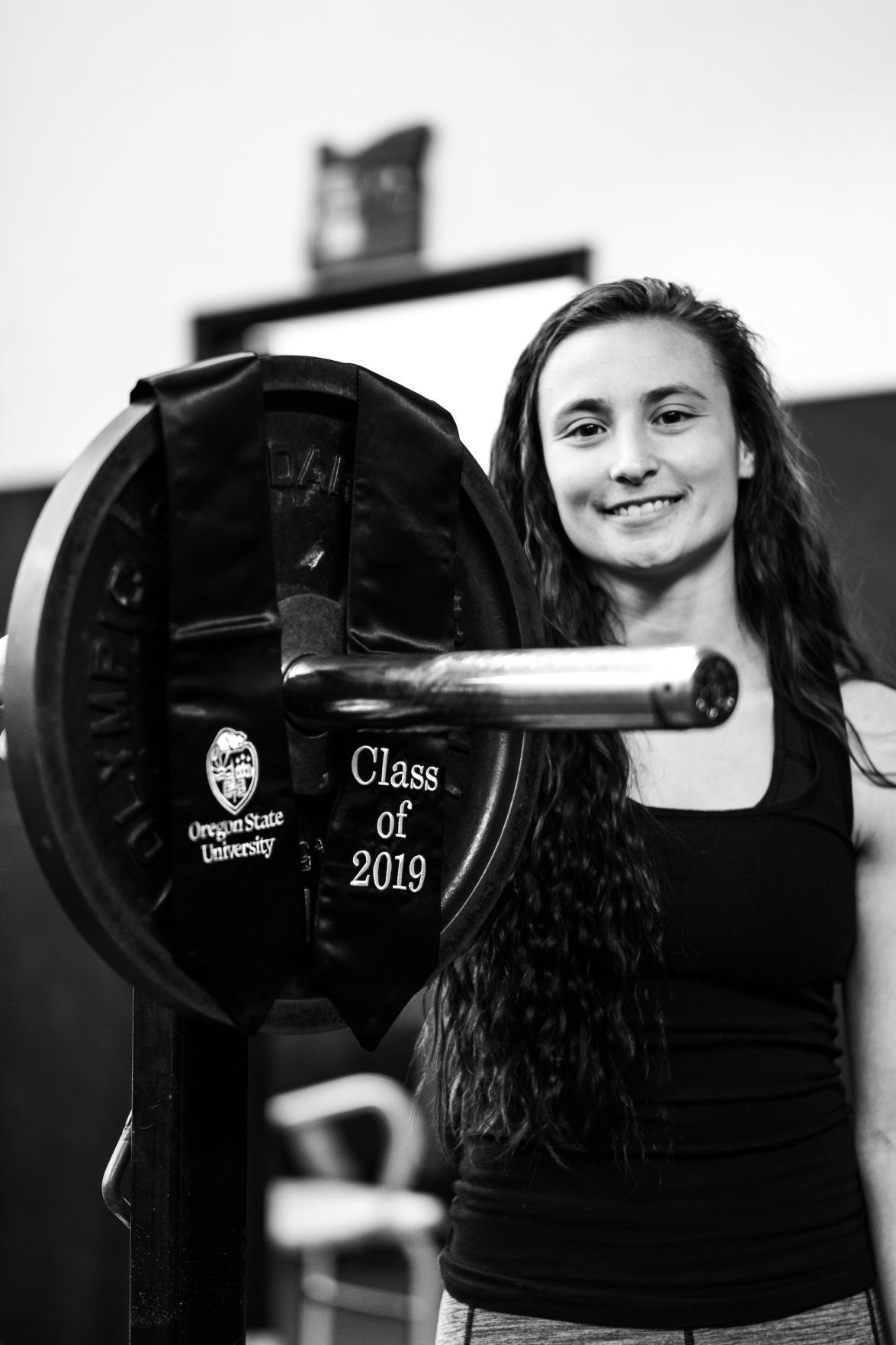 Kily Gilbert competes in the deadlift event during the USPA Drug Tested Oregon State Championships on March 14 at Chinook Winds Casino and Resort in Lincoln City. Gilbert, a 2015 graduate of Roseburg High School, broke the national record for the Junior Women 56K class with a lift of 385.8 pounds.

Kily Gilbert obtained a Bachelor of Science degree in kinesiology from Oregon State University in 2019 and is currently working on a master’s degree in athletic training.

For someone with just three years of competitive powerlifting experience, Kily Gilbert has made a name for herself in the sport.

She also broke the state record in the open class in bench (154.3 pounds).

“Those were about my expectations,” Gilbert, the daughter of Shane Gilbert and Mary Gilbert, said Thursday in a phone interview from Corvallis. “They all we’re a little lower than what I wanted, but overall I was really pleased with the outcome.

“If you’d told me over a year or two ago I’d be squatting 300 pounds, I probably would’ve just laughed.”

“I liked my deadlift, but record-wise I’m most proud of setting the total,” the 5-foot-3 Gilbert said. “You can be good at one lift, but being able to set the total record means you’re fairly strong at all the lifts.”

All told, Gilbert lifted about seven times over her body weight.

“I think that’s pretty cool,” she said. “When I first started, I felt like I wasn’t as strong as the other women. Now that I have something measurable, it boosts my confidence.”

Gilbert was a gymnast and competed in cross country and track and field at Roseburg High School. Both of her parents were athletes at RHS.

She was introduced to powerlifting by her boyfriend, Taylor Houchins, who she met at Oregon State.

“His friend group did it and I watched them compete in December 2016,” Gilbert said. “He convinced me to try it.”

Her first competition came in Sisters in April 2017.

“When I got there I was super nervous. I’d never competed in anything like weightlifting,” Gilbert said. “But everybody was super nice and encouraging ... everybody cheers everybody on and I liked the environment. It was really cool to see a lot of women trying to get stronger.

“I didn’t have a great day, and walked away a little disappointed but grateful for the experience. It definitely fueled the fire, I wanted to do better.”

Gilbert has competed at nationals before, but won’t attend the event later this year in Columbus, Ohio, due to a full field.

“I will try for next year,” she said.

School makes it a challenge for Gilbert to get to the gym as much as she’d like. She obtained a Bachelor of Science degree in kinesiology from OSU in 2019 — compiling a 3.76 GPA — and plans to complete her Master’s in spring of 2021.

“I try to go (work) out four days a week for around two hours,” Gilbert said. “(Lifting) has increased my muscle mass. I could do more cardio, but overall I’m in pretty good shape.”

Gilbert worked with the OSU football team last fall, attending two road games. She was scheduled to help the baseball team this spring, but the coronavirus pandemic put an abrupt end to the Beavers’ season.

Gilbert was one of four interns selected to work with the San Francisco 49ers for six weeks this summer.

“I’m very excited about that,” she said.

COMMENTARY -- Today was supposed to be Opening Day

COMMENTARY -- Today was supposed to be Opening Day