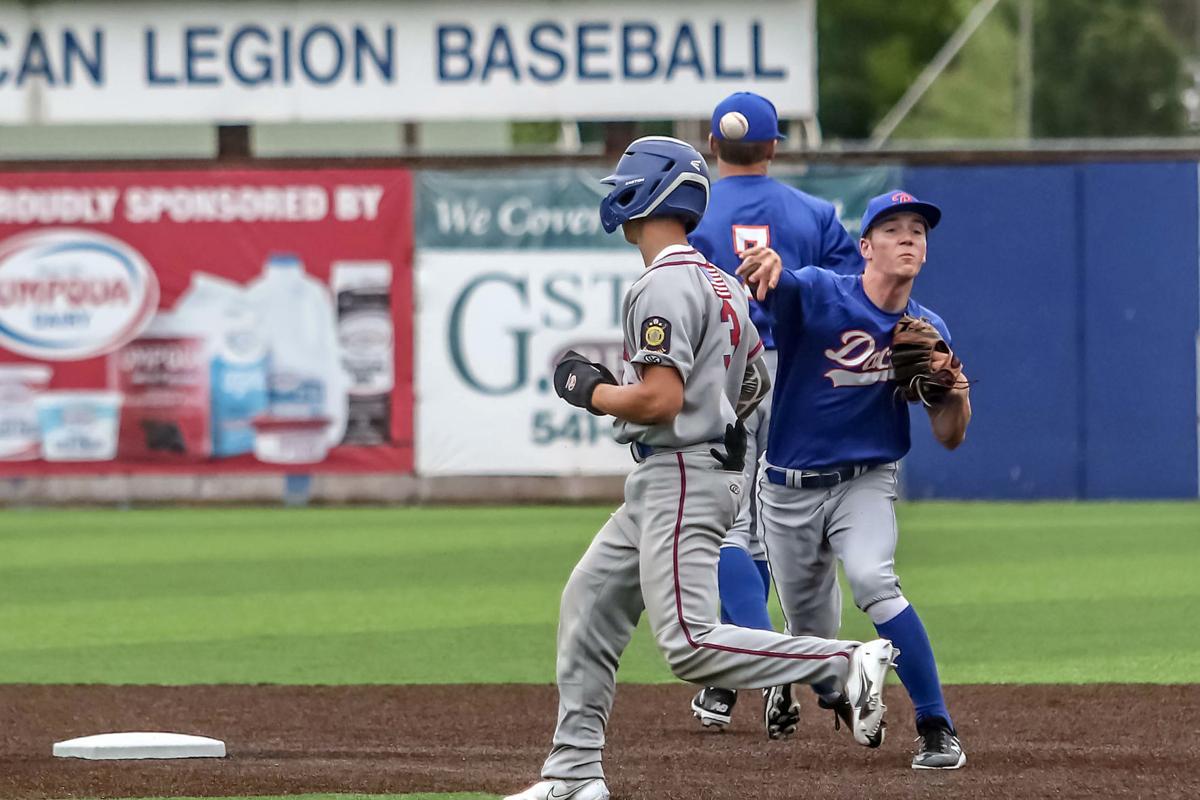 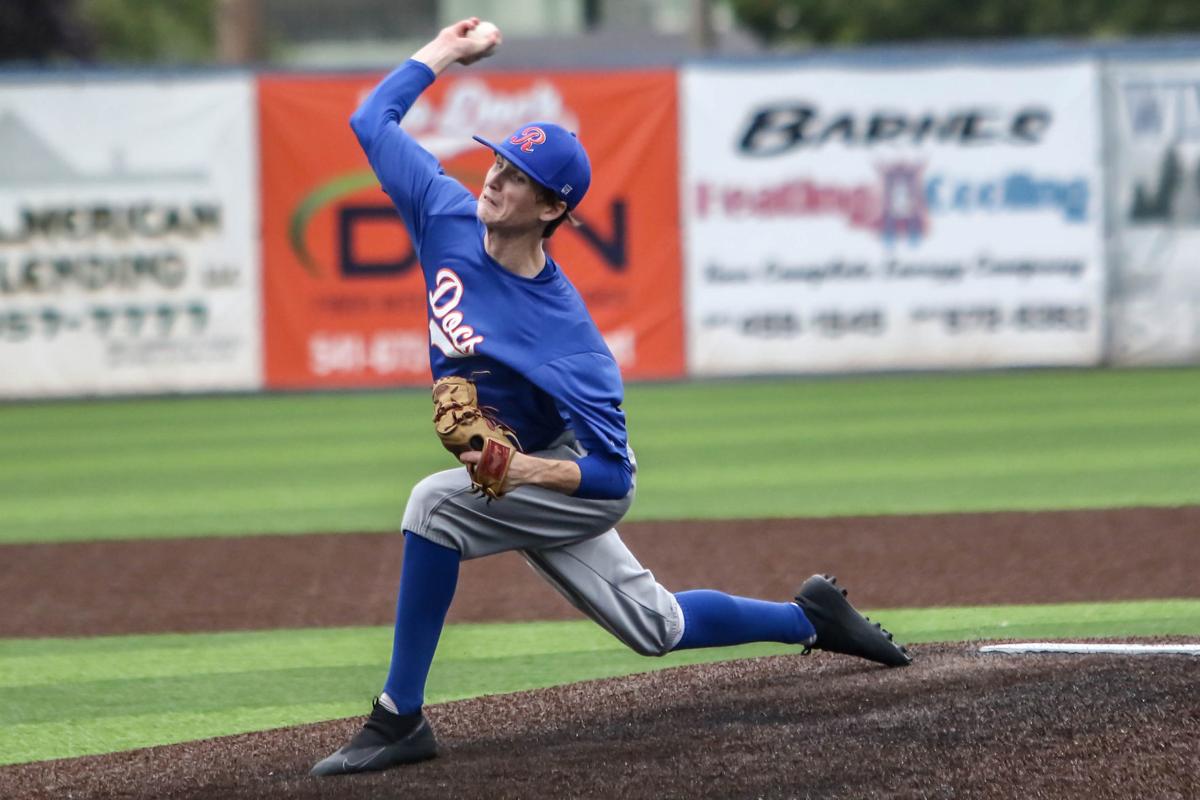 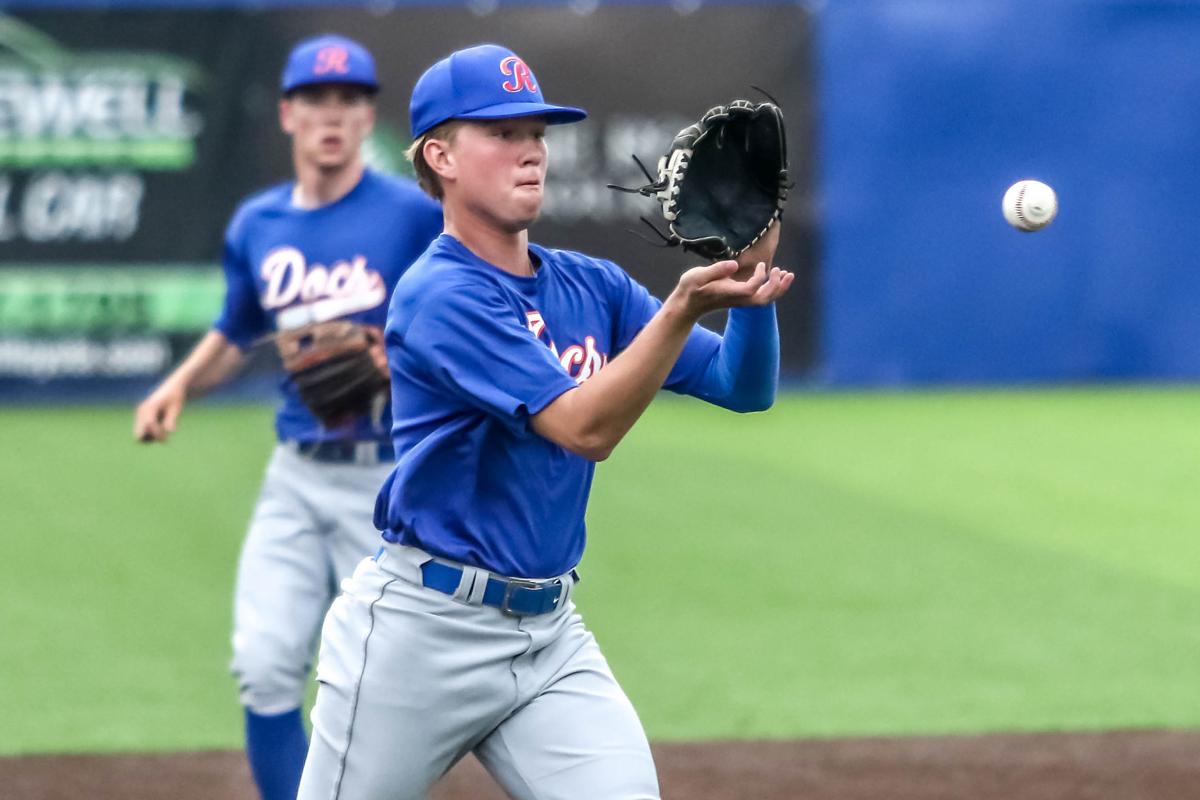 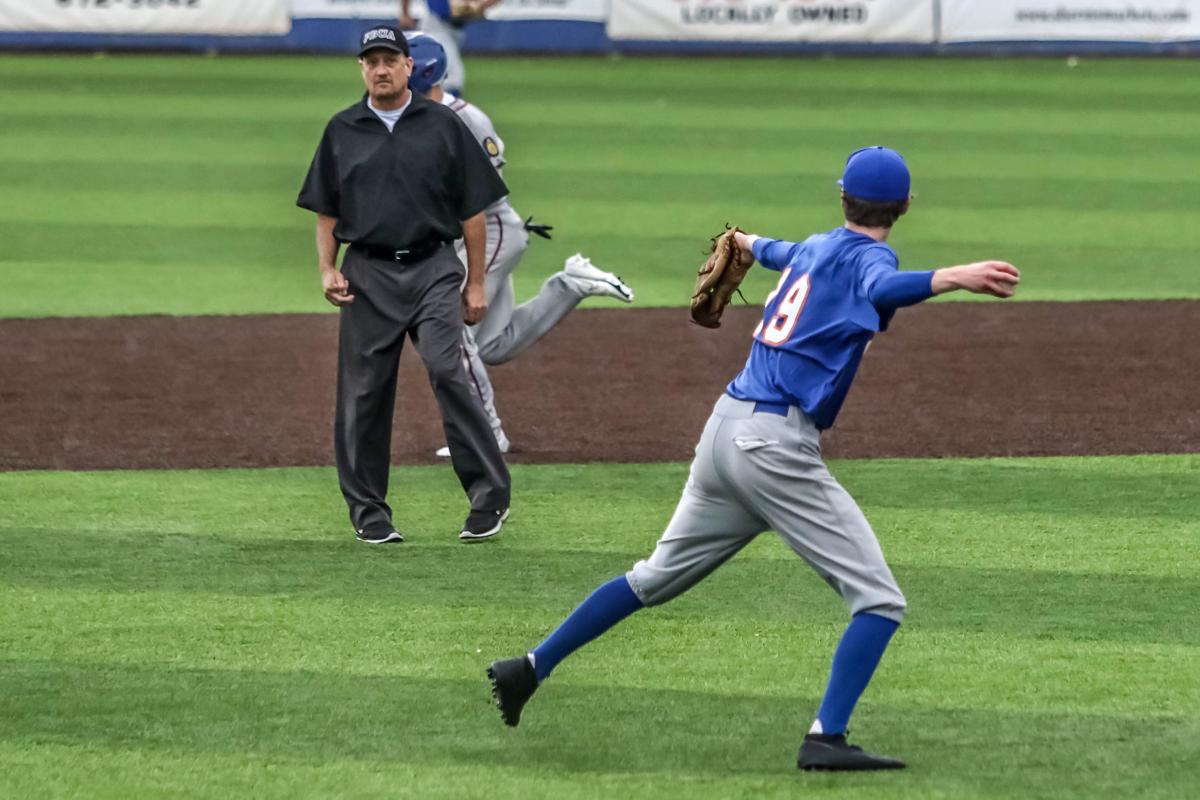 Docs pitcher Payton Hope (19) makes the throw to second base in time to get Klamath Falls baserunner Caleb Waits during the fifth inning at Bill Gray Stadium at Champion Car Wash Field on Saturday night.

Docs pitcher Payton Hope (19) makes the throw to second base in time to get Klamath Falls baserunner Caleb Waits during the fifth inning at Bill Gray Stadium at Champion Car Wash Field on Saturday night.

It’s normal during the course of a sports season to have a performance or two that you won’t be particularly proud of.

Saturday night was one of those for the Roseburg Docs baseball team.

They did get a shutout, 5-0 over the Klamath Falls Falcons in the Father’s Day Tournament at Bill Gray Legion Stadium at Champion Car Wash Field.

But it wasn’t an inspired effort by the Docs, who managed only five hits at the plate and committed three errors on defense.

On the positive side, pitchers Payton Hope and Logan Klopfenstein combined on a two-hitter and were aided by three double plays.

“We definitely could’ve been better today,” surmised Docs second baseman Luke Van Norman. “We’ve got to put our heads down and get ready for the game tomorrow.”

The Docs have won all three of their games in the tournament by an accumulative score of 18-5. They conclude the tourney against North Medford at 6 p.m. Sunday.

“We weren’t very sharp,” Docs coach Jeremiah Robbins said. “We were kind of lethargic in our movements, so we’ve got to be better than that. You have the opportunity to play in front of your home crowd and have to play with some energy, and we just didn’t do that today.

“Overall a ‘C’ effort. It was average. Not what we expect when you put on a Dr. Stewart’s uniform.”

The Docs scored four runs in the bottom of the first inning, thanks to some wildness by Klamath Falls starter Bailey Whitlock.

Jace Stoffal followed with a soft single to center field, but it knocked in three runs for a 4-0 advantage.

Jacob Luther knocked in the fifth run for the Docs, scoring Dawson Gillespie with a sacrifice fly with one out in the fourth inning. Gillespie had led off the inning with an infield single and advanced to third on a single by Spencer Six.

An infield single by Doran Gillespie in the third and a triple by Van Norman in the fifth were the Docs’ other hits.

“We need to do better (at the plate),” Van Norman said. “Get our heads in the game and work harder.”

Hope, a Sutherlin High School graduate who played at Umpqua Community College during the spring, picked up the decision. The right-hander gave up one hit over five innings, striking out three, walking three and hitting one batter.

“Payton Hope always competes, we never question his competitiveness,” Robbins said. “He kept us in it and those double plays were nice.”

Klopfenstein, a left-hander out of Roseburg, worked the last two innings. He allowed one hit with one strikeout and three walks. Klopfenstein got out of a bases-loaded jam in the seventh, fanning Kaden Bolanos to end the contest.

“It’s a process,” Robbins said. “We have to understand the focus piece.”