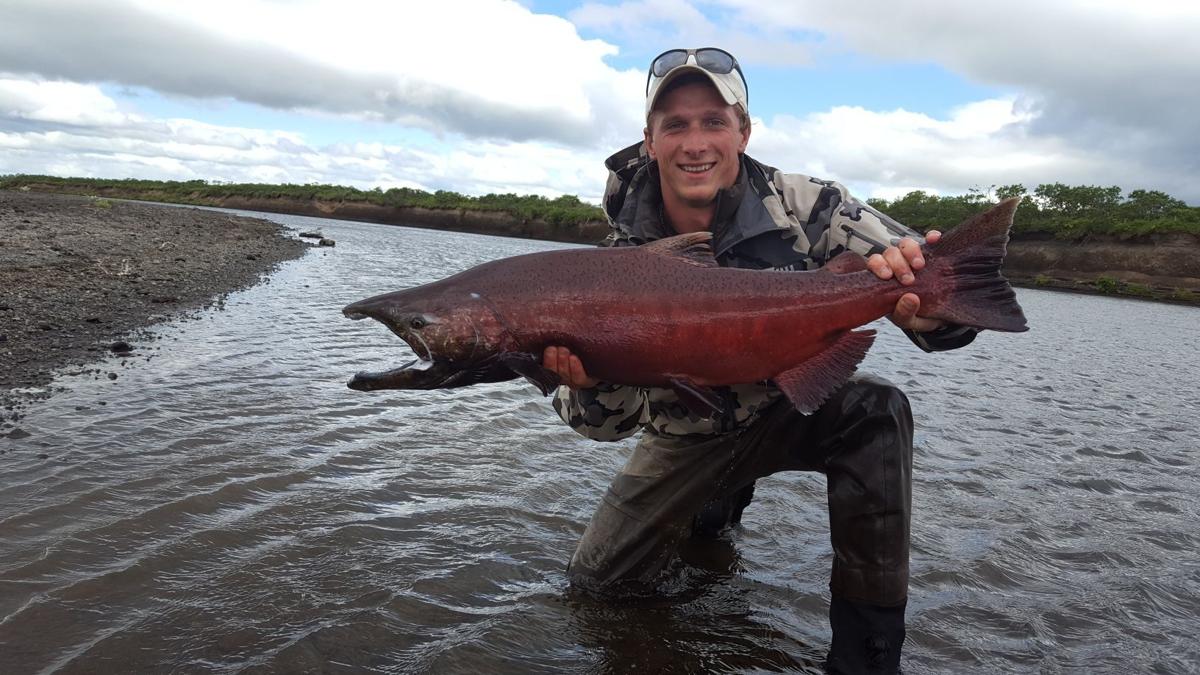 Kai Wolfe of Camas Valley holds up a chum salmon during a recent fishing trip in the Alaska wilderness. Wolfe, who played on the Hornets’ 2011 and 2012 eight-man football state championship teams, is in his fifth year as a fishing and hunting guide in Alaska. 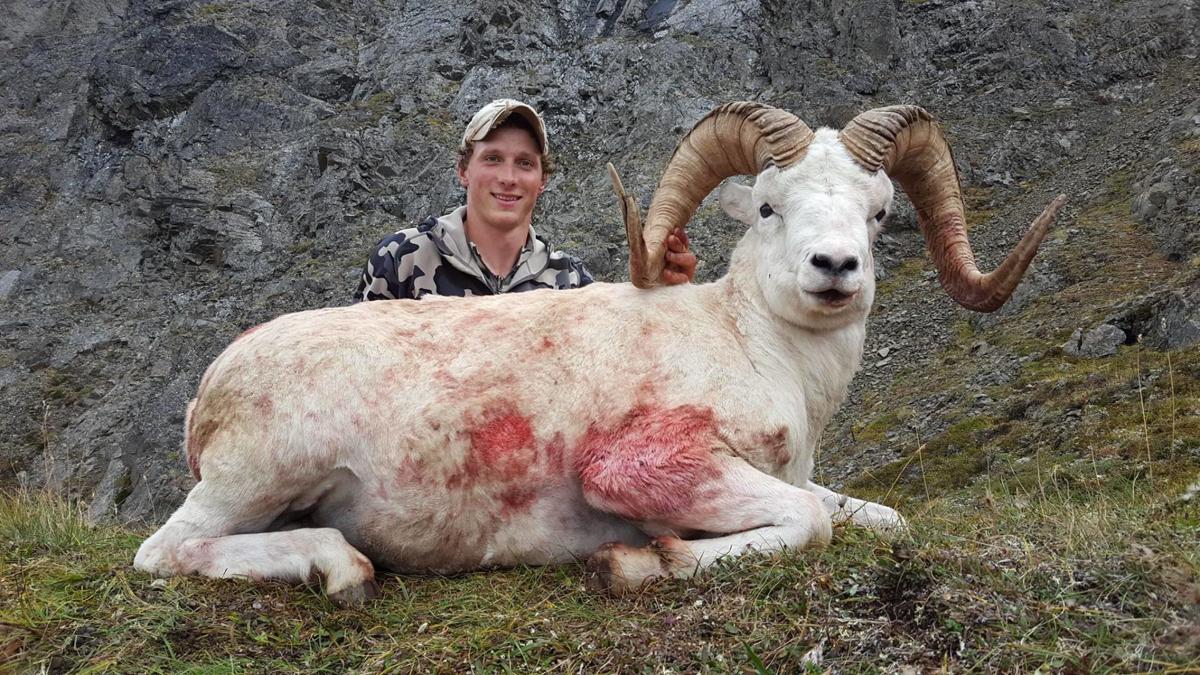 Kai Wolfe holds up a dall sheep at the conclusion of a hunt in Alaska recently. 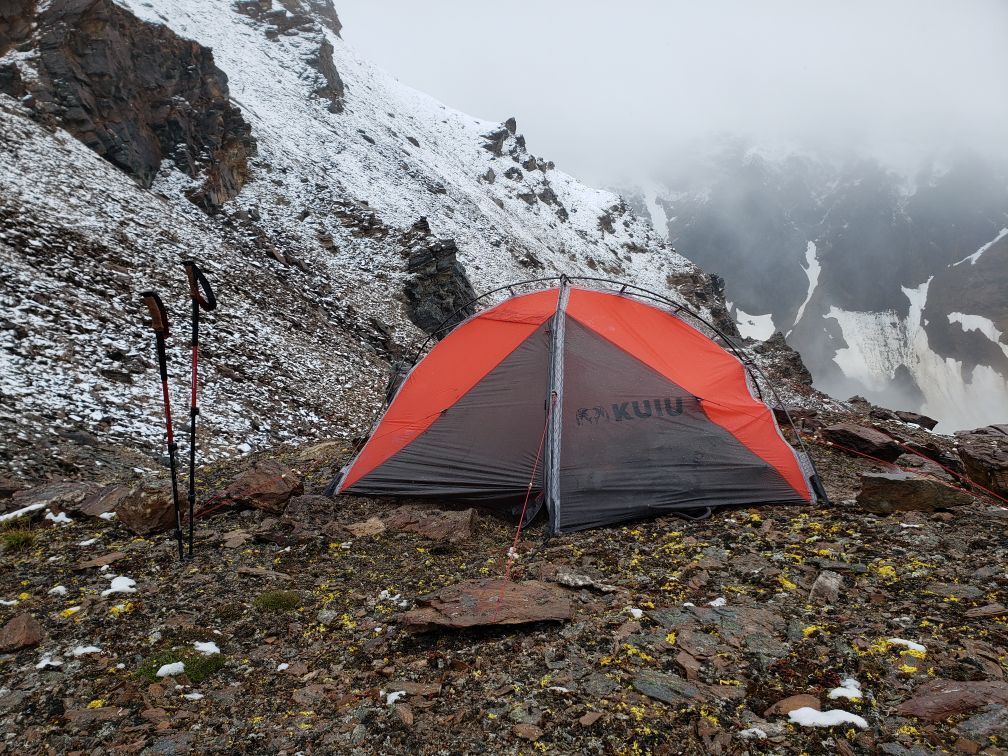 Snow covers the terrain surrounding Kai Wolfe’s campground on a recent hunt in the Alaska wilderness. 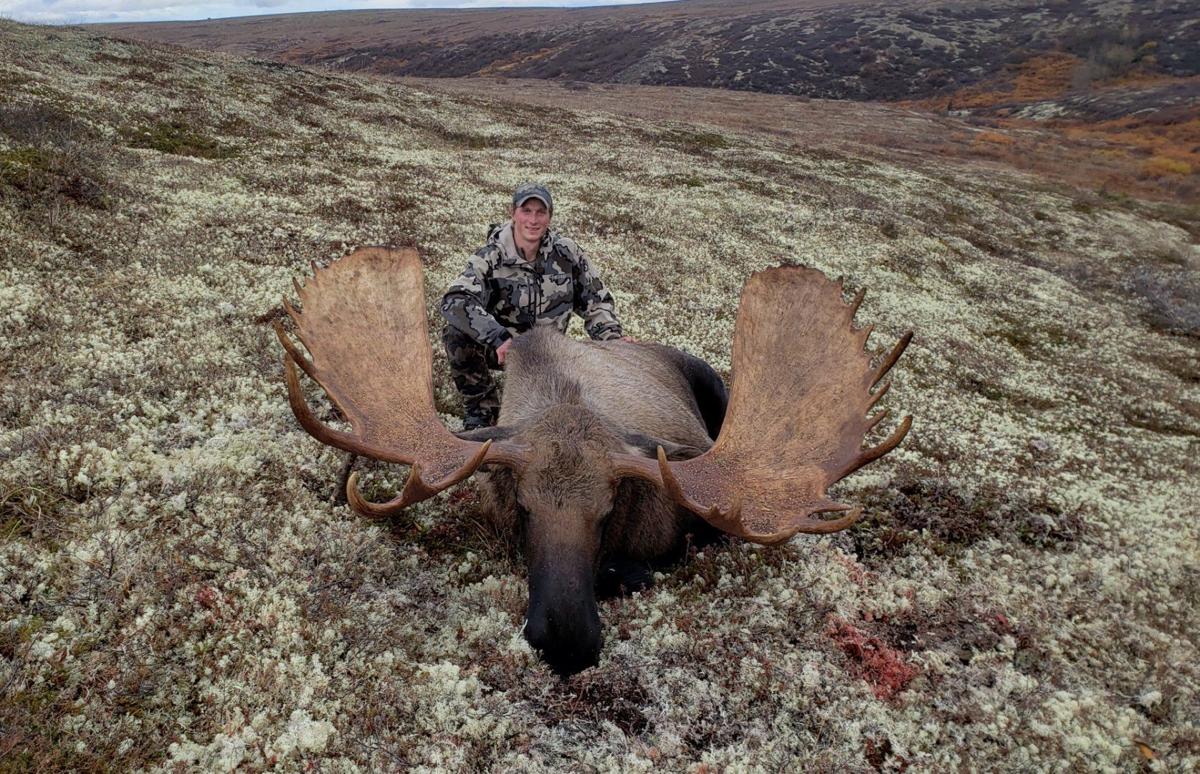 Kai Wolfe poses with a moose he killed on a recent guided hunt in the Alaska wilderness.

Kai Wolfe of Camas Valley holds up a chum salmon during a recent fishing trip in the Alaska wilderness. Wolfe, who played on the Hornets’ 2011 and 2012 eight-man football state championship teams, is in his fifth year as a fishing and hunting guide in Alaska.

Kai Wolfe holds up a dall sheep at the conclusion of a hunt in Alaska recently.

Snow covers the terrain surrounding Kai Wolfe’s campground on a recent hunt in the Alaska wilderness.

Kai Wolfe poses with a moose he killed on a recent guided hunt in the Alaska wilderness.

Kai Wolfe put in countless hours of training and conditioning as a high school athlete.

Wolfe, a 2015 graduate of Camas Valley High School, was a standout three-sport athlete for the Hornets. He was a part of state championship-winning football teams, a state title relay team and was selected for all-league and all-state awards throughout his prep career.

He was one of the top high school athletes at the Class 1A level when he graduated, yet it might not have been enough to prepare him for his current job.

“Boy, I got into shape,” said the 23-year-old Wolfe, who now works as a fishing and hunting guide in Alaska. “We do a lot of hiking, sometimes for days on end and miles and miles. I was told early on to get good boots, but there’s no way you can break them in enough to handle this kind of terrain.”

That terrain is comprised of all of the “last frontier” of Alaska’s wilderness, ranging from frozen tundra above the Arctic Circle to the streams and fishing holes within a short drive of Anchorage. He’s also guiding hunters and anglers on what many of them consider to be their dream hunts, including moose with massive tusks and grizzly bears weighing up to 1,000 pounds.

Working for Freelance Outdoor Adventures based in Eagle River, he’s also helped guide fishing trips for king, sockeye and chum salmon along with rainbow and silver trout. Other hunts can last for weeks on end through unforgiving conditions. For example, on the weekend of Aug. 15, 2020, when Roseburg baked under a record-shattering high temperature of 108 degrees, Wolfe had to thaw out the poles on his tent with hot water so he could break down camp and continue on the guided hunt he was leading in the north Alaska wilderness.

Getting to these places is also no easy task. Most hunting sites, if they’re not accessible by driving, can’t be reached without a plane. His first hunt, in fact, extended over 10 days of tracking and hunting an Alaskan dall sheep. The hunter was finally able to harvest the sheep with horns extending 43 inches in length on a governor’s tag that auctioned off at $190,000.

“That’ a lot of pressure to start out a new career with, especially when you talk about people spending that kind of money,” Wolfe said.

Two days before he began his career as a field guide, he was playing in the Oregon East-West Shrine All-Star Football Game in Baker City. That appearance capped his more-than-stellar prep football career at Camas Valley, where he earned all-state accolades on both sides of the ball and was part of a program that won two consecutive state championships during his freshman and sophomore seasons.

Eli Wolfe, Kai’s father who in 2018 stepped down as Camas Valley’s head football coach, was the one who drove his son to the airport to fly to Alaska less than 48 hours after his final high school football game. He said the tenacity and mental toughness his son showed on the football field made him a good fit for leading hunts in harsh conditions — especially when adversity is inevitable.

“I can still remember how on the morning of the 2012 state championship game (a 24-8 Camas Valley victory against top-seeded St. Paul), he woke up with a temperature of 102.5 (degrees),” the former coach said. “He was dead set on playing, and I kept telling him ‘You know what? You don’t have to do this.’ But he wouldn’t take no for an answer.

“And then low and behold, we win the state championship and he has two interceptions,” he continued. “It’s that kind of mental toughness that makes such a difference in the kind of job he has now. That, and also, one of the main things we teach our kids from when they’re little is that whatever you do, do it with all of your heart.”

The younger Wolfe, one of four children of Eli and Kirsten, concurred.

“When I was in high school, I was always on the go and always doing something, and that’s kind of the same way things are here,” said Kai Wolfe, who also played basketball and, in track and field, was a member on a state championship 4x100 meter relay team. “But up here, there’s a mental toughness you have to have because all of the physical stuff is so demanding. If I wasn’t able to keep things together mentally, I probably wouldn’t have stuck around this long.”

Even in the five years he’s been on the job, he said there’s still a tremendous amount of things left to learn even though he’s learned so much already. And it’s not just about hunting terrain and animals. Alaska has some of the strictest hunting and conservation laws in the United States, though there have been attempts at the federal level to roll back hunting restrictions on predators that live on Alaskan wildlife refuges.

Kai Wolfe has to keep track of any change that happen while continuing to learn about the vast Alaskan wilderness. And he only does it for eight months out of the year — he’s retained his Oregon residency and even keeps an offseason job working for TNT Construction in Camas Valley.

He said he’s not sure how long he’ll continue working as a guide and realizes that even the bodies of the most well-conditioned guides can wear down in a hurry under heavy duress. In the meantime, Wolfe said he’ll soak in every experience he can.

“I don’t really have an end pan right now,” he said, laughing. “Everyone keeps asking how long it is that I can do this, and I’m not 100% sure. What I am sure of, though, is that not a lot of people in the world get to hunt and fish for a living. That’s what I’m the most thankful for. Hunting and fishing and flying around this beautiful country is what I’m getting paid to do.”

High school highlights: Helped lead Camas Valley's football team to eight-man football state championships as a freshman and sophomore. First-team all-state selection on offense and defense as a senior. ... Was part of a state-title winning 4x100-meter relay team as a junior in 2014, capping the school's run of three consecutive state championships in the event. ...

A hike in the Mt. Baldy Wilderness