Starting at
$0.99 for 1 day
Get Started
View all rates
You have permission to edit this article.
Edit
Welcome, Guest
N-R
NEWS
Coronavirus
SPORTS
OPINION
LIFE
ENTERTAINMENT
BUSINESS
OBITS
CLASSIFIEDS
1 of 5 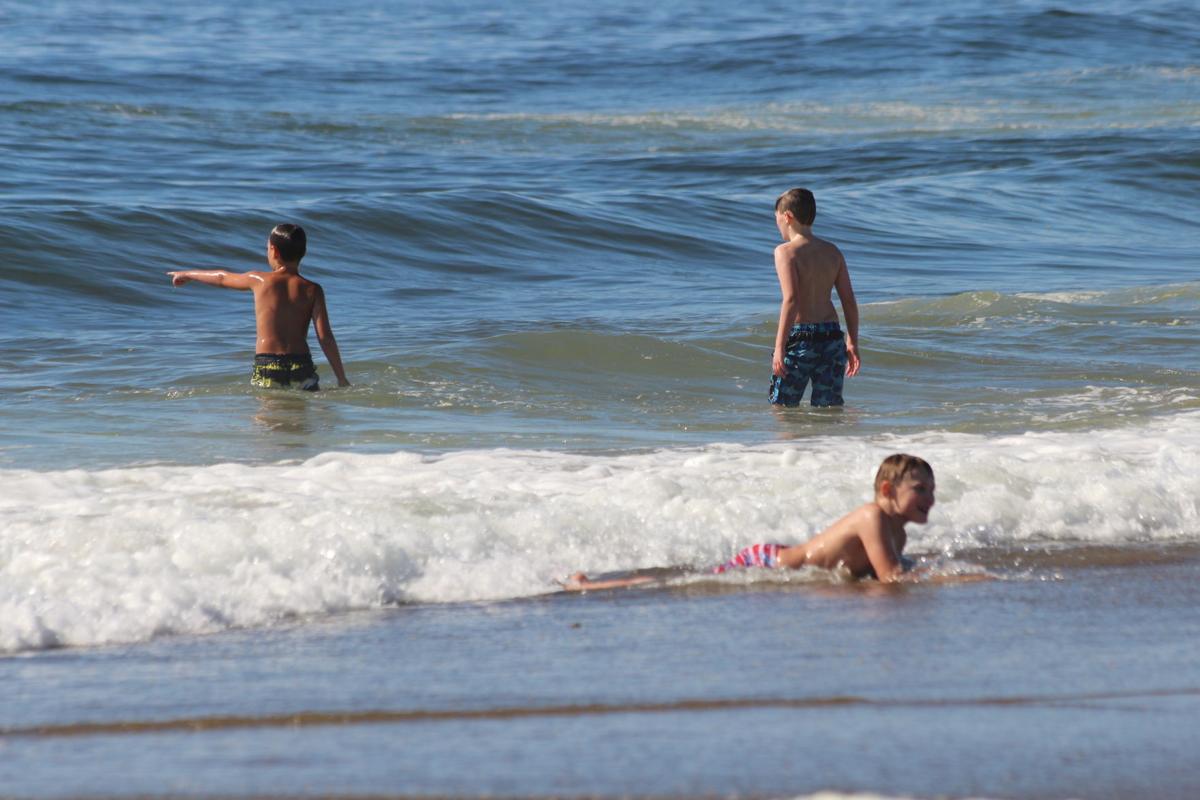 A rare, warm summer day lured several swimmers into the frigid waves at the Oregon coast. 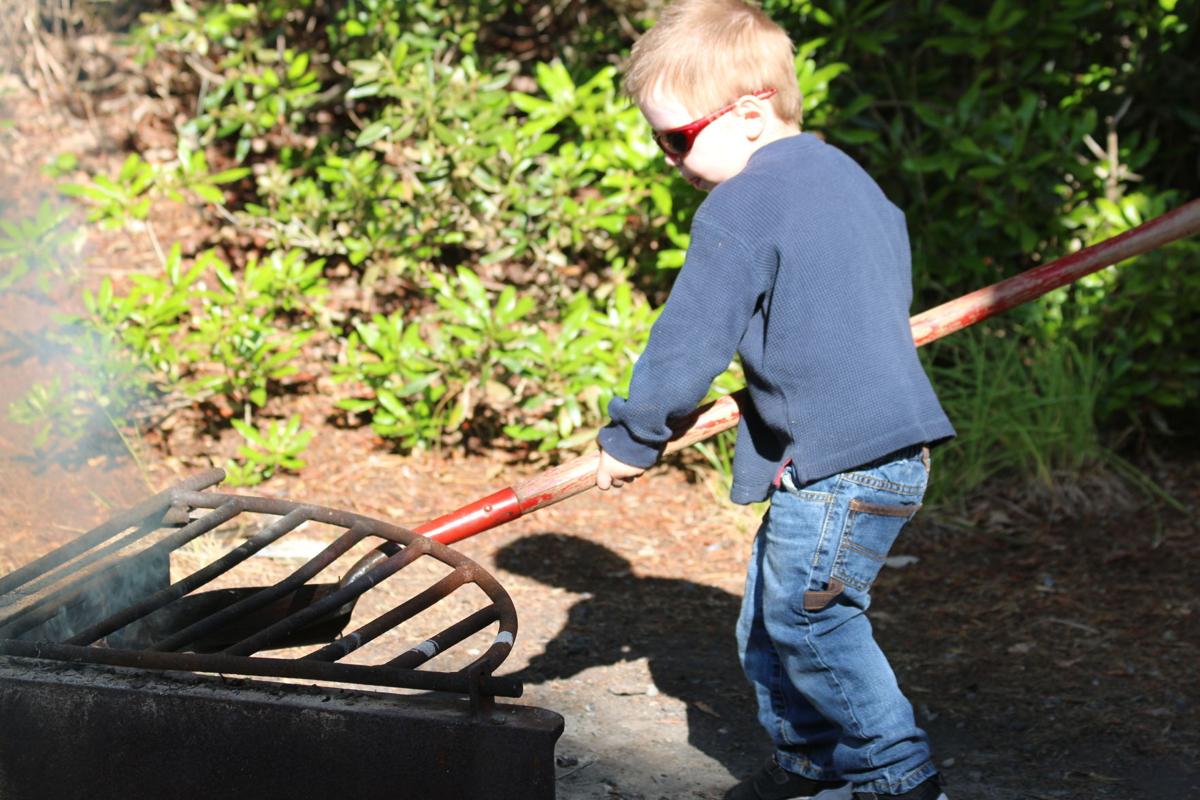 Zane Stone, age 3, who is obsessed with campfires, is camping at Bluebill Lake on the Oregon Coast with his grandparents. 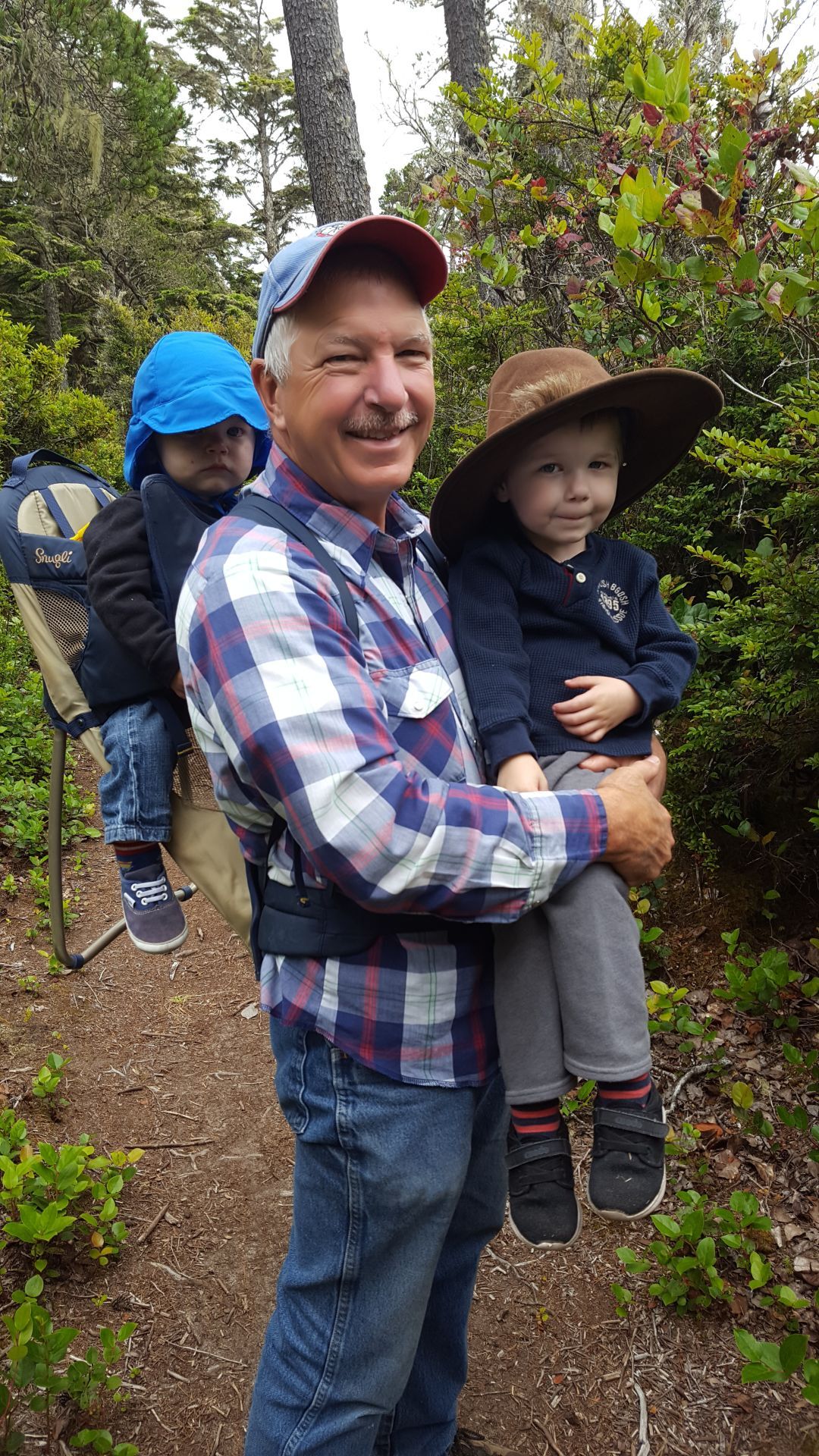 Kyle Miller (middle) camping and hiking with his grandsons, Izaak Stone (left), and Zane Stone (right) at the Oregon Coast. 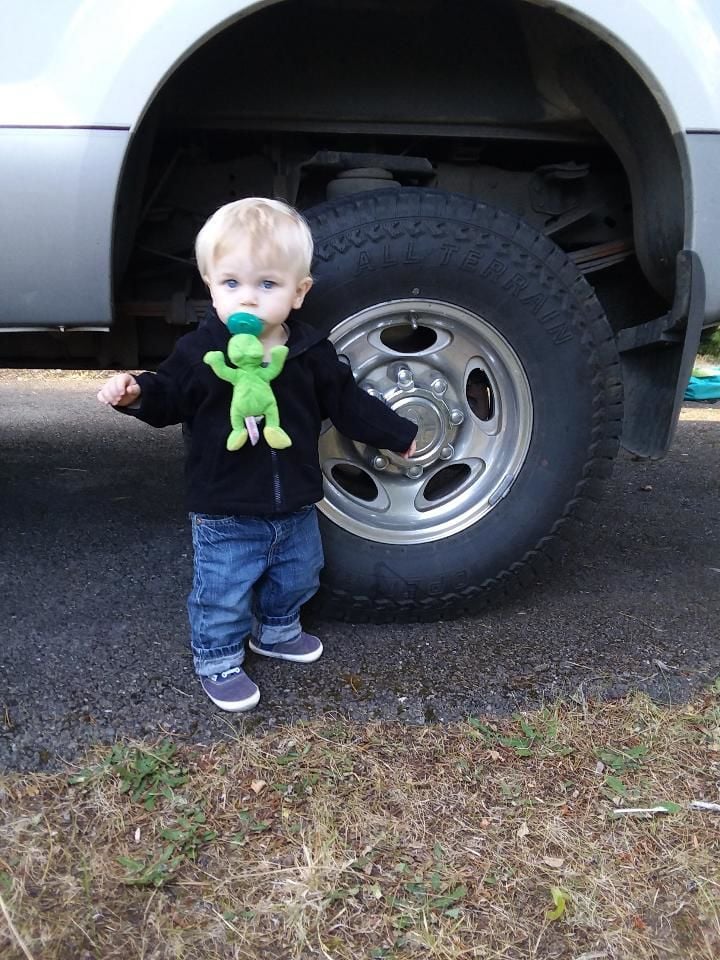 The 16-month-old Izaak Stone is dwarfed by the big truck used to take him camping at Bluebill Lake near the Oregon coast. 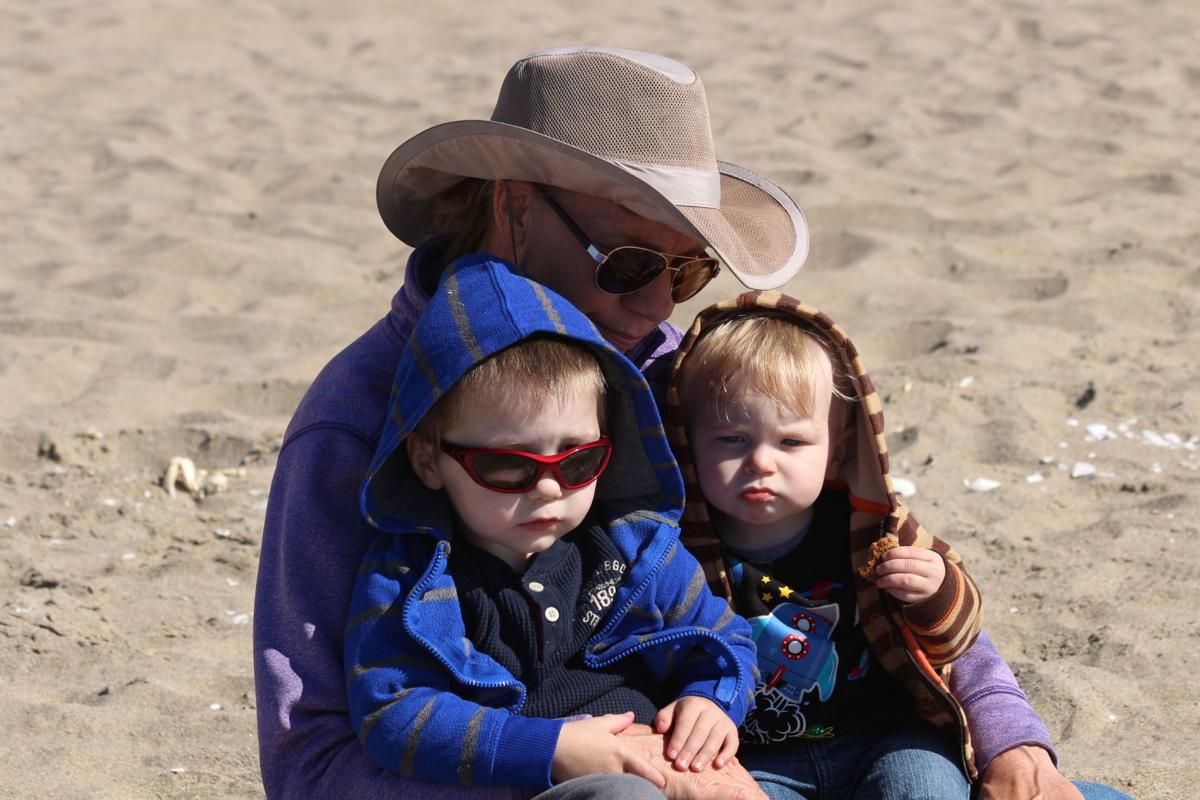 A rare, warm summer day lured several swimmers into the frigid waves at the Oregon coast.

Zane Stone, age 3, who is obsessed with campfires, is camping at Bluebill Lake on the Oregon Coast with his grandparents.

Kyle Miller (middle) camping and hiking with his grandsons, Izaak Stone (left), and Zane Stone (right) at the Oregon Coast.

The 16-month-old Izaak Stone is dwarfed by the big truck used to take him camping at Bluebill Lake near the Oregon coast.

Some would say that we were brave grandparents to take our 16-month-old and 3-year-old grandsons tent camping, at the coast, by ourselves. Others would say we are nuts.

I lean toward the nuts theory. One friend declared, “I would never do a ‘grandparent camp.’ I need my sleep.”

It took all morning, and then some, to pack the usual camping paraphernalia plus extra sleeping bags, a pack and play crib, sippy cups, potty chair, booster seat, baby backpack, toys. Once our 8-foot truck bed was stuffed with stuff, we slid into our crew cab and heaved a sigh of relief.

Bad idea. Something had died in our truck. No doubt a mouse that mistook D-Con for the truck’s wiring system.

When we arrived to pick up the little tykes, 3-year-old Zane raced around and around the house jabbering in excitement.

“Did they just wake up from their nap?” we asked.

“No,” their mother confessed, “they haven’t had their usual nap for the last three days.”

Sixteen-month-old Izaak stared owl-like at us with round blue eyes. We looked vaguely familiar, he was sure. He had no clue what was going on, but if big brother was excited about going somewhere, then he was on-board for the adventure.

Before the beaming parents waved goodbye, they had a few last-minute remarks.

“By the way, Zane has not pooped for three days, and Izaak had a bean burrito for lunch.”

We picked a campground located only half an hour from the boys’ home — just in case. Bluebill Campground is a cute little campground situated just north of Coos Bay next to Bluebill Lake and the dunes. Our pleasant campsite was a little closer to an unpleasant dumpster than we would have preferred, but then camping with small children smells anyway.

Firebug Zane has been obsessed with fire for the past year dating back to his last campout. We had barely released him from his car-seat prison when pleas for a fire began. Kyle packed a three-foot shovel for Zane to use for poking and prodding and stirring up the fire. With barely a glance at the Zane-sized shovel, Zane promptly picked up the full-sized, twice-his-size shovel, staggered over to the fire, and started poking with glee. Izaak toddled over to the small, twice-his-size shovel and staggered toward the fire too.

Understandably, one of us stayed on kid watch at all times as the other erected our civil-war style wall tent and set up camp. A sandpile kept their interest for a time — at least until Zane learned what sand burrs were.

Zane was down to bravely whimpering by the time the last sticker was pulled from his little hand. The big, big shovel then was put to use clearing our campsite of the nasty weeds.

As the day was ending, we herded what should have been tired tykes to the tent. But no — up to this point, little Izaak had not uttered a word. Once in his crib, he waxed downright eloquent. Despite the chatter of children, Kyle was the first to fall asleep.

Even vigilant Grandmommy dozed off and on while the tiny tykes were still going strong. At last, around 10:30 p.m., the baby collapsed, allowing me to slide him into his sleeping bag. Zane followed suit by crawling into his own sleeping bag after removing all the warm garments I had dressed him in.

Ahhh, now Grandmommy was wide awake. Off-road vehicles roared around the dunes in the dark. A guy with an unusually noisy truck “snuck” into camp to dump his garbage into the dumpster and rumble all the way around the campground. The baby began a soft whiffling whisper snore. My mind, however, kept straining, trying to figure out a deep reverberating sound reminiscent of a truck engine turning over and over but not able to start. “What is it?”

The next morning, we loaded Izaak into the baby backpack and took Zane for what turned out to be a nature walk around swampy little Bluebill Lake. Small gaps in the bridge planks caused Zane to clutch my hand tightly. Not so the discovery of snakes — lots of long, colorful garter snakes. The creepy sound of a myriad of snakes slithering into the brush made my skin positively crawl.

Zane was unconcerned and not particularly interested in the reptiles sunning themselves on logs along the way. Now roots sticking up in the path? Those were interesting. At the far end of the pond-lake, we discovered over-sized tadpoles, and Kyle hushed us to listen to the croaking of a big old bullfrog.

Ohhh, that’s what the engine-unable-to-start sound was.

After the walk, Kyle happily settled down in the tent with Izaak and taught him, by example, how to nap. When it was Zane’s turn to try to catch some Zs, he wanted a story read to him. Not having packed any children’s books, I read my current novel about the establishment of Israel as a nation to him. He noticed nothing amiss as I skipped the words mentioning terrorist bombings and the like, eventually succumbing to the sandman.

No visit to the coast is complete without time on the beach. So after nap time, we loaded the boys into their car seats and headed to Horsefall Beach.

Horsefall Campground is amazing. It appears the state took a day-use parking lot, numbered the parking spots, added a picnic table and fire ring at the end of each parking spot, and called it a campground. The OHV crowd with their fancy RV toy haulers were happy as clams to be camped cheek by jowl with each other as they noisily wheeled out onto the dunes and along the beach.

No visit to the beach is complete without standing along the water’s edge watching the waves. Before long I was distracted by the interesting people around us. “Oops! Sorry, Izaak! The water is cold, isn’t it?”

That night, once again, bedtime was the signal for the party to begin. Add a flashlight in the hands of a baby, and a good time was had by all — at least until Izaak decided to see what would happen if he tossed his light over the side of the crib. Confiscating the flashlight quickly triggered a toddler’s tantrum. Yeah, like that’s going to make me give them back their flashlight.

By the time Izaak finally sacked out, he was facing the wrong way for me to be able to slide him into his sack without waking him up. As any good grandmommy would, I twisted the hood of the sleeping bag around him to keep him warm. Throughout the night, I was awakened by a protesting cry. It wasn’t until the fourth time of checking on the baby when I realized I had him wrapped like he was in a strait jacket. The poor little guy was just trying to stretch out in his sleep.

On Day 3, by the time we returned the tuckered tots to their parents, the tiny twosome was teetering toward titanic tantrums.

Maybe grandparents aren’t the ones needing to worry about lack of sleep at Grandparent Camp!