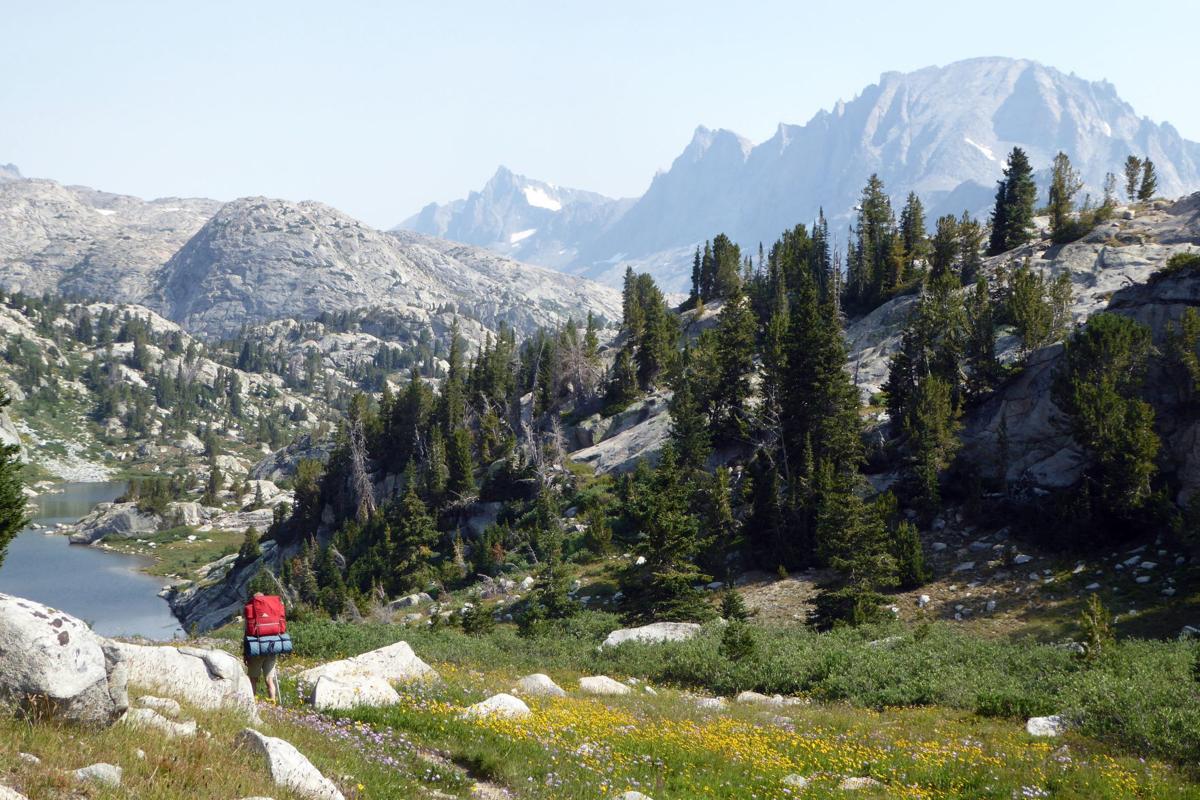 Looking north on the Continental Divide trail, the 13,745-foot Fremont Peak is on the right. 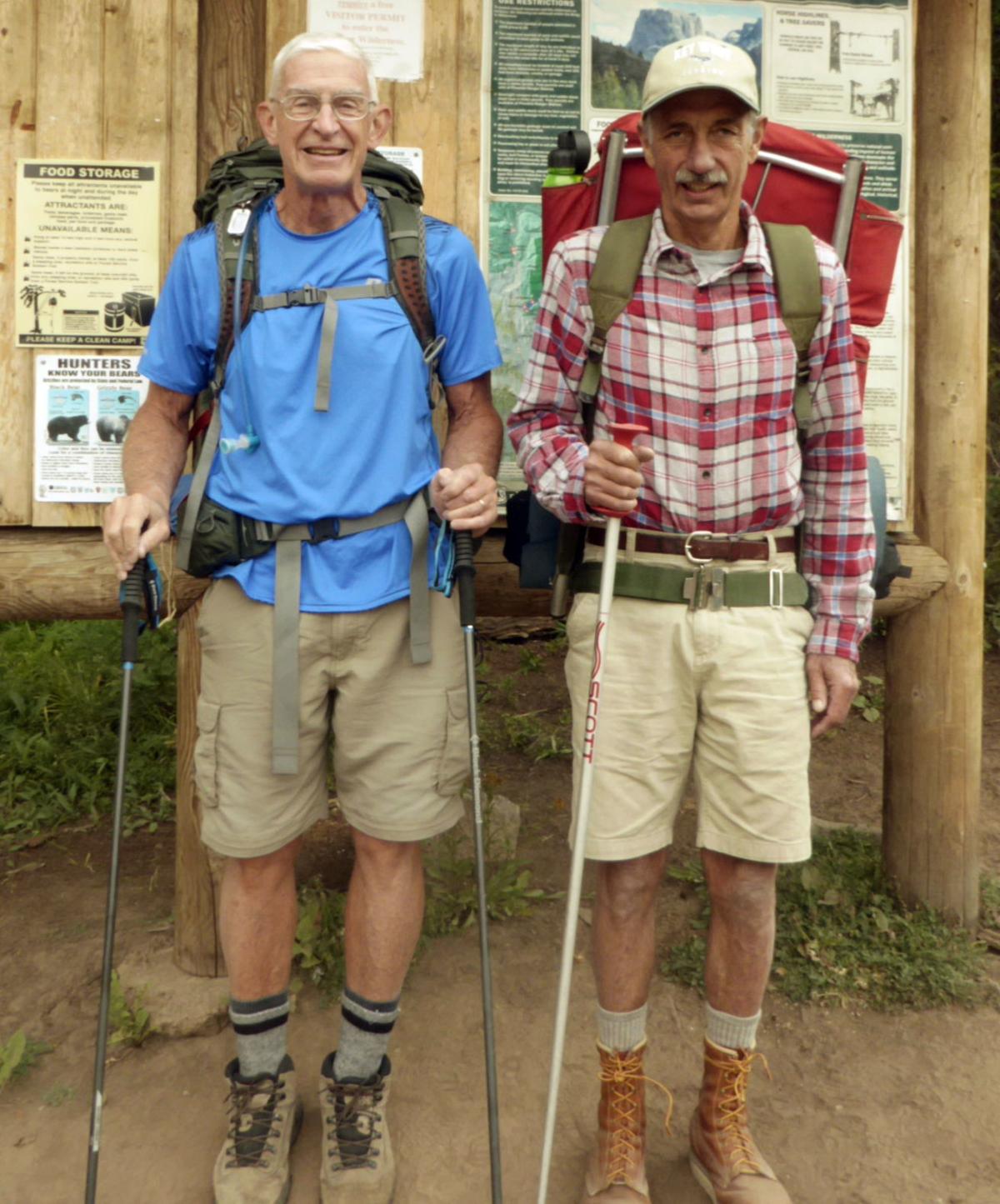 Dave Fauss, 77, and Fred Friesz, 72, prepare to hike in the Bridger Wilderness of Wyoming 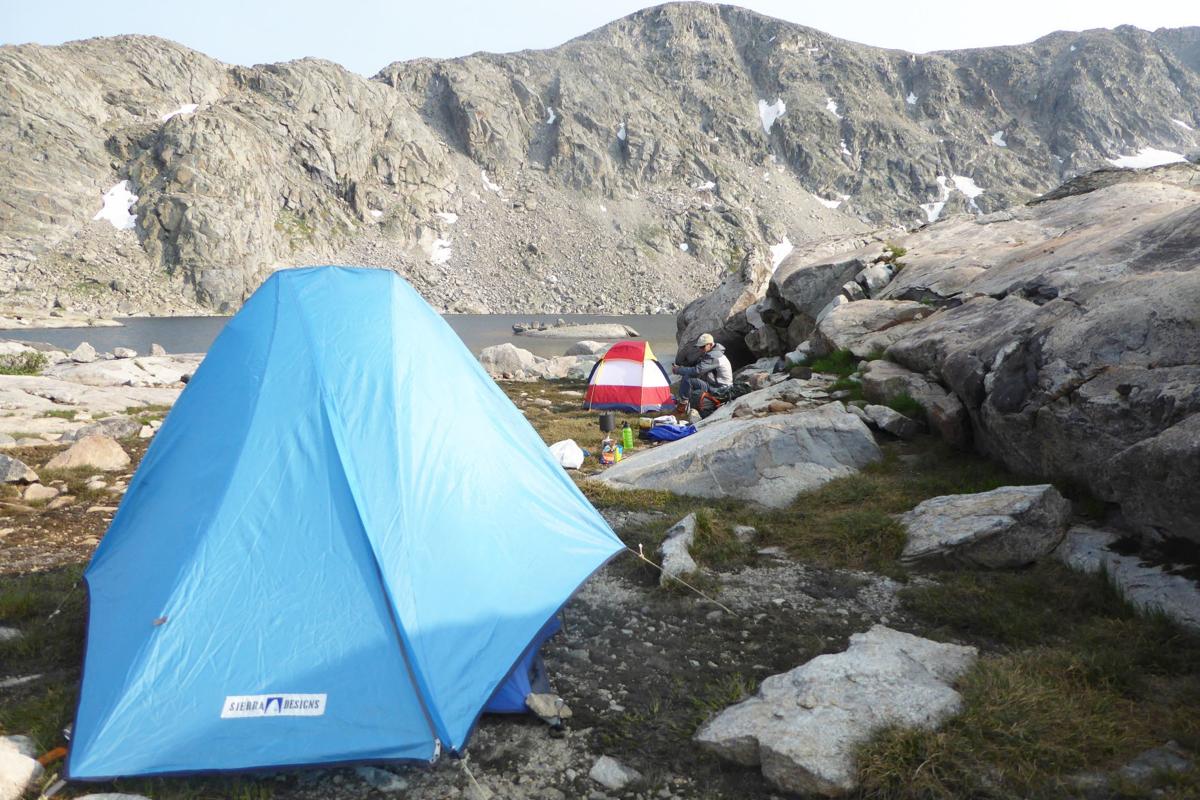 Camp was set up above the timber line at Elbow Lake, elevation 10,850 feet. 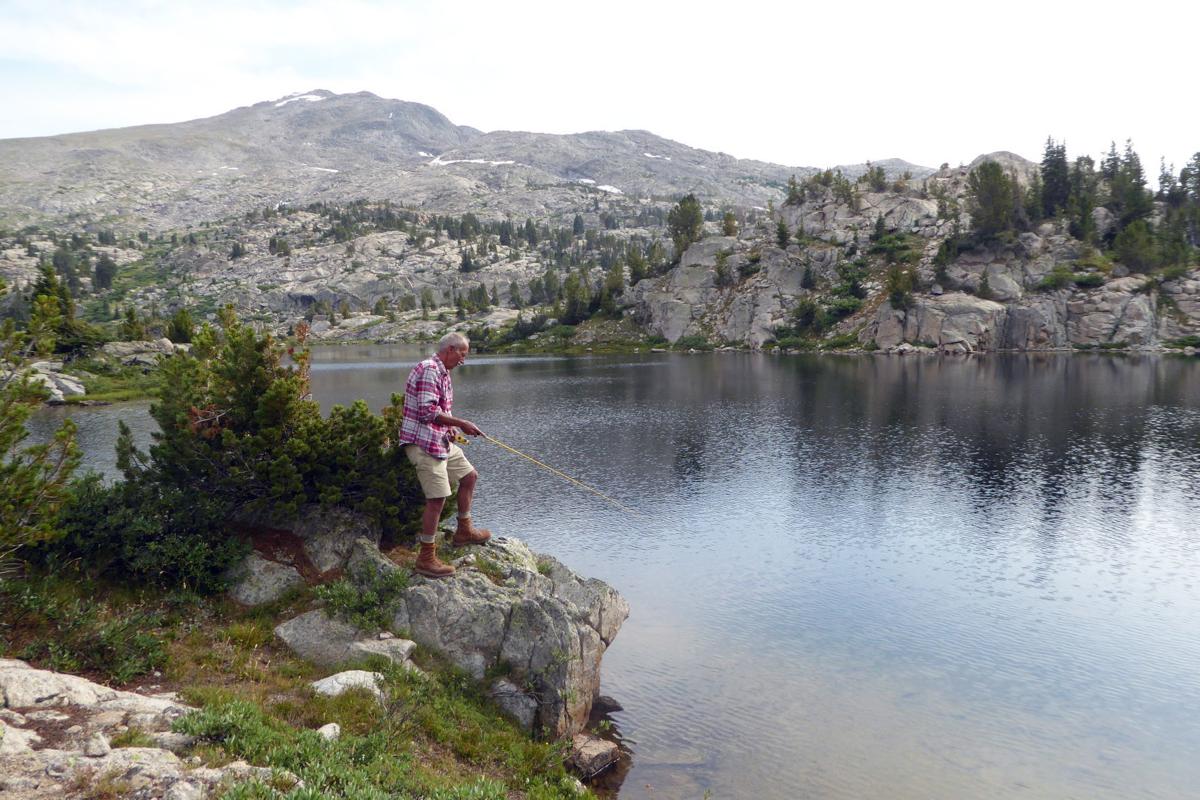 Looking north on the Continental Divide trail, the 13,745-foot Fremont Peak is on the right.

Dave Fauss, 77, and Fred Friesz, 72, prepare to hike in the Bridger Wilderness of Wyoming

Camp was set up above the timber line at Elbow Lake, elevation 10,850 feet.

Only a day and a half drive from Douglas County is one of the most accessible, spectacular and pristine wilderness areas in the U.S. — the Bridger Wilderness in Wyoming’s Wind River Range. Thousands of backpackers, fishermen and alpinists have already discovered this paradise for outdoor enthusiasts. Countless more pass nearby on I-80 or en route to Grand Teton and Yellowstone National Parks without realizing what they are missing.

In 1967, I met up with my colleague, hiking and climbing friend, Fred Friesz, in Montana and we first drove down to the Grand Tetons and climbed Middle Teton, Grand Teton and Mount Moran. We then continued south 76 miles to Pinedale, Wyoming, where we parked at the Elkhart Trailhead at the boundary of the Bridger Wilderness. For 10 days we hiked, camped, fished for several species of trout, crossed large glaciers and climbed five of the highest peaks in the Wind River Range, including Wyoming’s highest summit, 13,804-foot Gannett Peak. And in those 10 days, we only encountered two people, one of whom was world famous mountaineer Paul Petzoldt, founder of the National Outdoor Leadership School.

Well, Fred and I were immediately “hooked” on the Wind Rivers. We returned in 1970 and 1972 for more hiking and climbing adventures and then family lives precluded our return until this summer, 46 years later, for a modest 54-mile, 6-day trek more befitting for two old foresters in their 70s.

And so you may ask, “What has changed in the Wind Rivers in the past 50 years?” Well, there are still 2,000 lakes and countless small ponds, but more of them are well stocked with trout, including the native Yellowstone Cutthroat and the California Golden Trout. There are still 48 granite peaks over 12,500 feet in elevation to climb and there are still dozens of glaciers, but the glaciers are smaller now. There are still hundreds of miles of excellent trails to hike and 12 trailheads to start from, but it is nearly impossible to hike for a day without encountering at least a few others and a few trails are simply packed with horses and hikers.

We studied maps, read guidebooks and carefully chose a hiking route that would mostly avoid the crowds, but we also decided to start and end our loop route at the same Elkhart Trailhead where we began in 1967 because the access road is now paved and because the trail begins at 9,350 feet elevation, which is about 2,000 feet higher than most other starting points. Boy, were we surprised to find a huge parking lot full of about 120 vehicles at this trailhead — it reminded us of a Costco parking lot. Three miles from the parking lot, we took a lesser-used trail and from that point on, we saw very few hikers.

A few words of explanation about crowds are in order. Due to the high elevation of the Wind River Range, only two or three months are really suitable for exploring these mountains, namely from mid-June to mid-September. Also, 90 percent of visitors probably visit Big Sandy Lake and Cirque of the Towers area or Island Lake and the Titcomb Basin, which ironically are not as scenic as many other locations in the Bridger Wilderness. Nearly all other trails or locations are very lightly used. While the Wind Rivers is in the top 10 most visited wilderness locations in the U.S., it is also one of the largest, with about one million acres encompassed within the contiguous Bridger, Fitzpatrick and Popo Agie Wilderness Areas, and the Wind River Roadless Area on the Wind River Indian Reservation.

The trails are well-signed and maintained, and most of the trails traverse plateau-like terrain at elevations between 10,000 and 11,000 feet, and all trails pass by many beautiful lakes and mountain streams. Few trails are steep, and so even children can easily hike in the Wind Rivers. Timberline is at about 10,500 feet, and wildflowers abound everywhere. The Bridger Wilderness is one of the easiest mountain areas in the U.S. to hike off trail due to lack of brush, sparse timber and gentle terrain.

About 25 miles of our route was on the Continental Divide (CD or Highline) trail, and it crossed over three gentle passes at 11,000 feet. This scenic trail is arguably the most scenic in the Bridger Wilderness, passing by numerous trout-filled lakes, meadows in bloom, with a backdrop of jagged snowy peaks along the Continental Divide crest of the Wind Rivers.

Some people express concern about acclimating to the high elevation, but we and others who we met on the trail from low elevations in other states, had little difficulty breathing in the rarified air. The “trick” is to walk at a slower pace, take frequent breaks, and to hike fewer miles per day. We averaged only nine miles per day and we walked at a pace of about 1.5 to 2 miles per hour with our 30- to 40-pound packs.

Temperatures ranged from about 40 at night to 65-72 in the afternoon. We had good weather except for a couple of afternoon thunderstorms, but hail or even snow can occur at any time of the year in the Wind Rivers, and so visitors should always carry some warmer clothes. In early summer, mosquitoes and flies can be a nuisance, but by August and September, little insect repellent is needed.

If fishing is your passion and joy, the Wind Rivers beckon you. Both fly fishing and spin fishing are very successful and easy. If you plan to cook fish on a campfire, then plan to fish those lakes that are below timberline, otherwise, a gas cook stove will be the only alternative.

A great map to buy online and published by Beartooth Publishing on waterproof plastic is “Wind River Range, Wyoming.” An excellent guidebook is “Hiking Wyoming’s Wind River Range” by Ron Adkison, and published by Globe Pequot Press. These handy tools, accompanied by careful advanced planning will ensure a memorable and exciting trek into the wilderness areas of the Wind Rivers.

David Fauss is a retired forester living in Douglas County.

Awesome post. Thanks for sharing. I have also a little discussion on bestfishfinders .As a fishing fanatic, you already know that one dimension would not match all. In case you are on the lookout for the very best fish finder, here's a evaluate of the very best models out there which you can go for