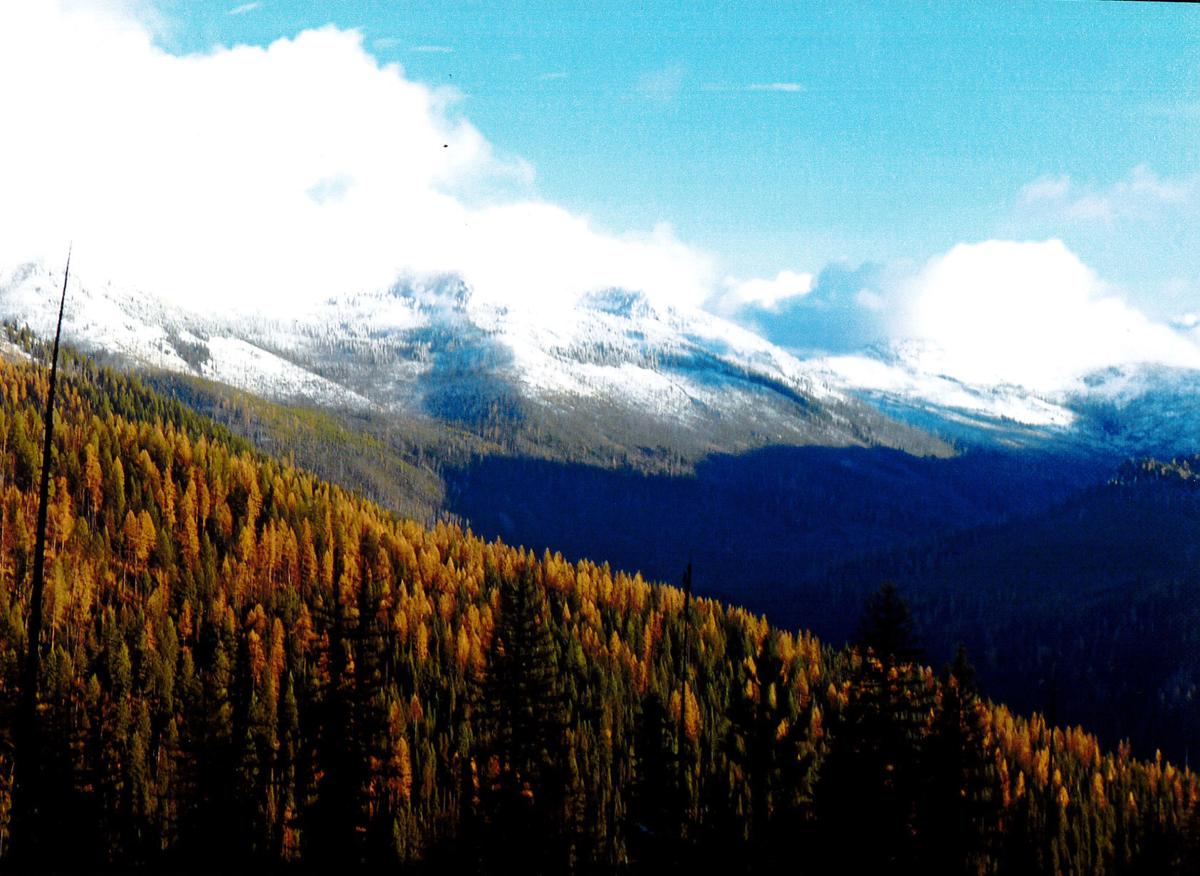 The long autumn shadows ease across the golden Tamarack and pine forest of eastern Oregon’s John Day Wilderness. The towering snow-covered granite peaks, deep canyons and steep ridges make up a rugged setting, and are home to the majestic Rocky Mountain Elk and years of the author’s hunts of happiness. 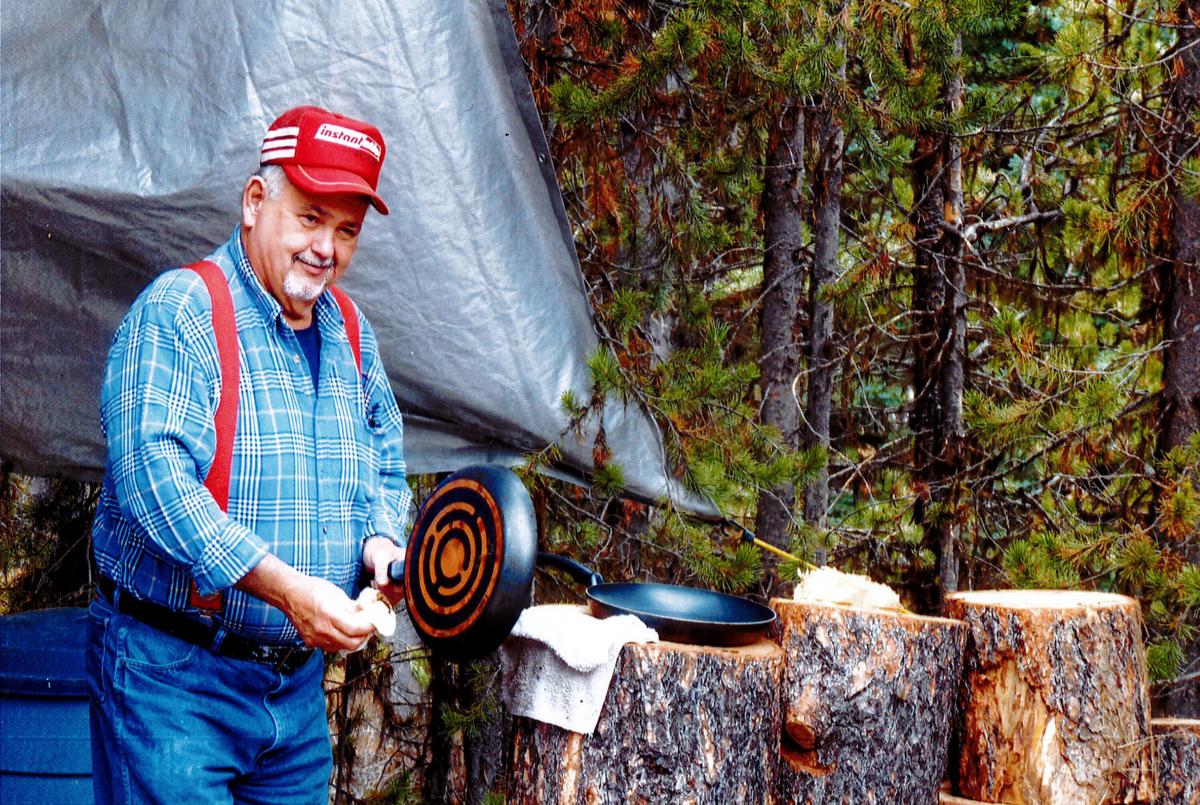 Jim Chartier, camp chef, cleans pots and pans after serving dinner to the elk hunters. After a hard day of hunting, his offerings get him high marks with the group. 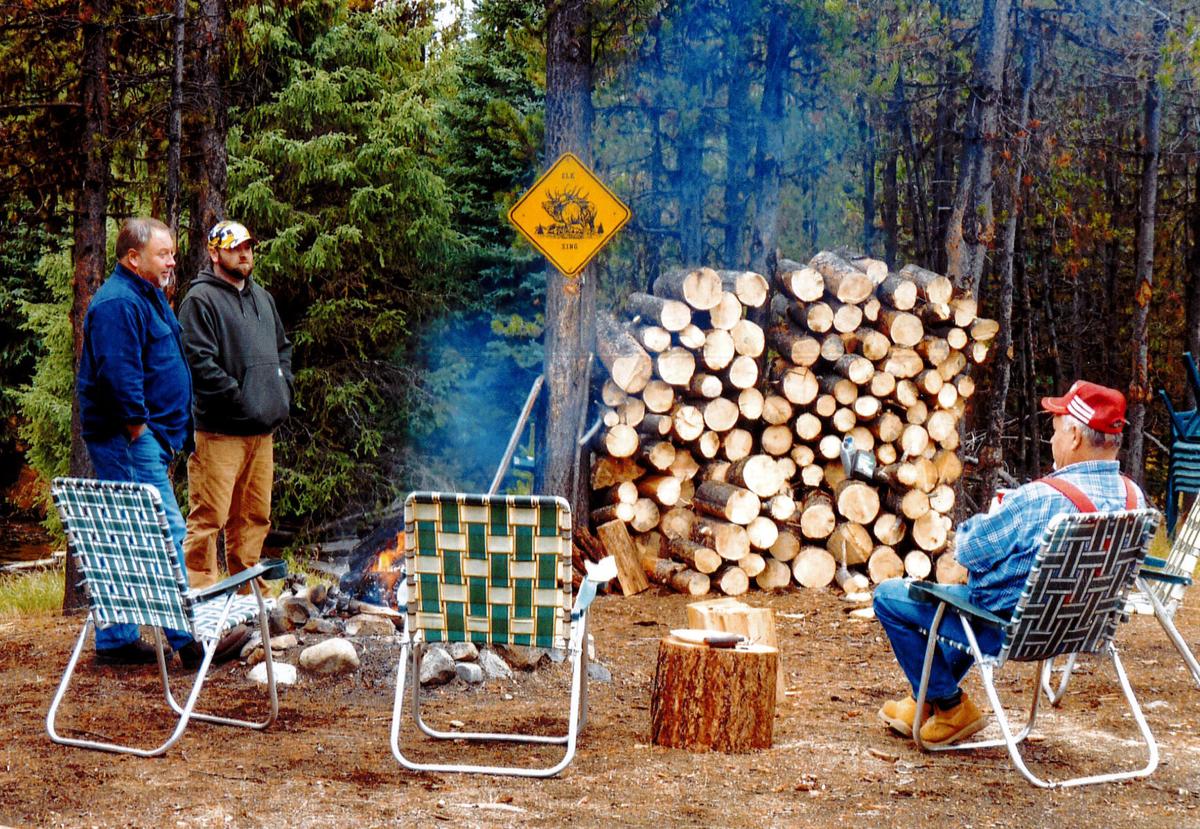 After the wood is cut and the campfire lit, Brad and Trevor Albertus chat with camp chef, Jim Chartier, about the next day’s hunting plan — and what’s for dinner. 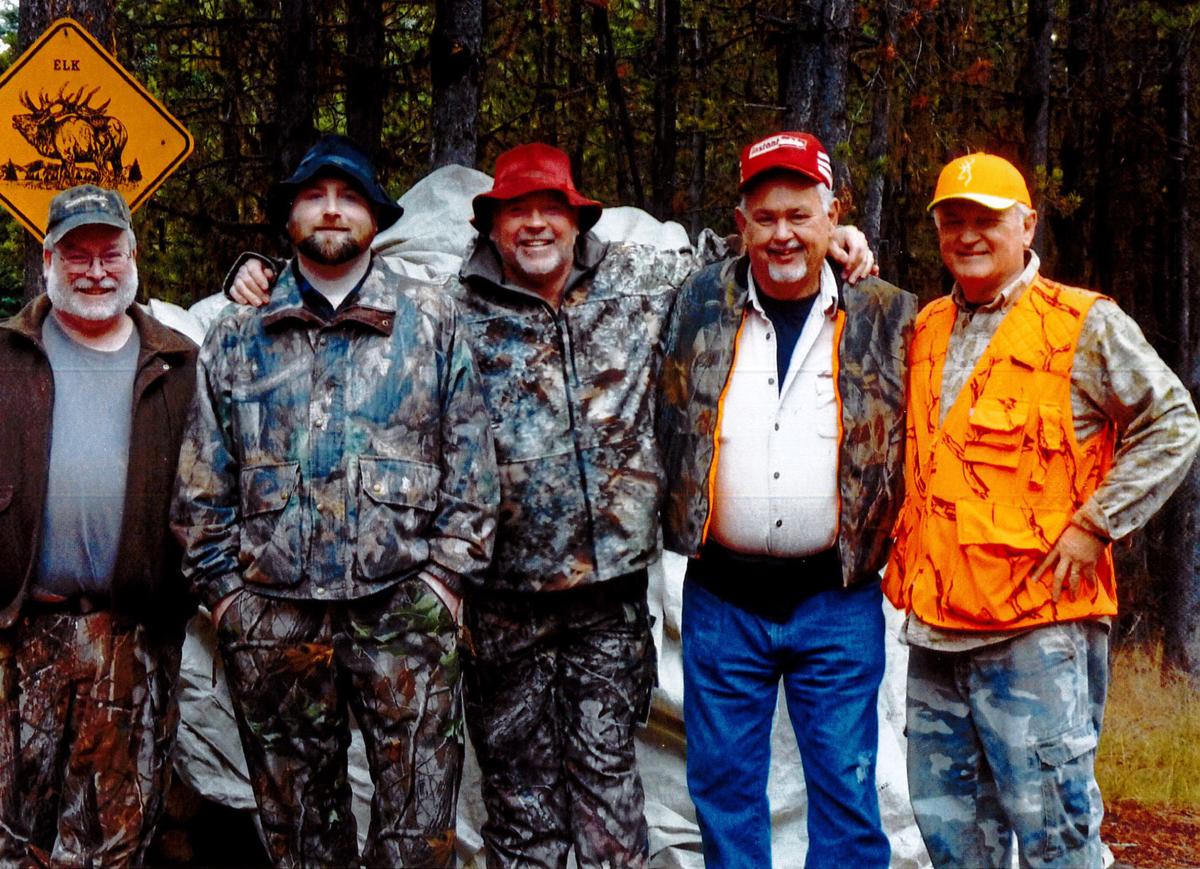 The long autumn shadows ease across the golden Tamarack and pine forest of eastern Oregon’s John Day Wilderness. The towering snow-covered granite peaks, deep canyons and steep ridges make up a rugged setting, and are home to the majestic Rocky Mountain Elk and years of the author’s hunts of happiness.

Jim Chartier, camp chef, cleans pots and pans after serving dinner to the elk hunters. After a hard day of hunting, his offerings get him high marks with the group.

After the wood is cut and the campfire lit, Brad and Trevor Albertus chat with camp chef, Jim Chartier, about the next day’s hunting plan — and what’s for dinner.

Whether it was a hiding place of emotions or a place to give thanks for life’s blessings, or simply a beautiful place to hunt elk, it really didn’t matter.

Deep inside Eastern Oregon’s John Day Wilderness on this late October morning the aroma of high-mountain, rich pine-scented air filled my lungs. In the pre-dawn darkness there was silence and solitude.

The quest to find elk — and myself — was beginning.

The small beam of light had guided my way up a narrow winding elk trail as I cautiously eased around and over windfall. Now as dawn began to approach and the darkness turned to shades of gray, I turned off the flashlight. Standing momentarily to allow my eyes to adjust and to listen, hoping to hear a twig snap or the soft thump of hooves of moving elk. I felt comfortable and blessed to be here once again.

The hunt along the winding ridges, steep canyons, and through thickets of lodge pole, and open benches of tall Ponderosa pine and golden Tamarack would take me 11 hours. If all went well I’d reach camp with a few minutes left of daylight. The only unknown was always the unknown, if and when I encountered elk. That thought raised my heart rate and sent me into a state of euphoria. I felt on top of the world. The melody of the morning was beginning to play.

Hunting the rugged Elkhorn Mountains of the North Fork in the John Day Wilderness had all began as a young 24-year-old state trooper stationed at the Baker Patrol Office, learning fish and game enforcement and checking elk herds. Now, nearing my 70th birthday, I found that the hills seemed steeper, the canyons and terrain more demanding, and the long winding stalk required more rest breaks.

At each pause the landscape was soon peppered with peanuts. It was a ritual or better yet – my thing. I spread out the offerings for several yards around where I planned to sit for 30 minutes or so. My thinking? The wildlife would enjoy their treats; thus the pine squirrels wouldn’t chatter, the magpies wouldn’t squawk, and other critters would pass by without being alerted or warned – and the elk would come. I smiled as I recalled telling the tale to other hunters of my technique. Though I was uncertain of their initial belief or possible thoughts of my sanity, as years passed and my Browning .300 magnum sent echoes across the canyons, I began to gain some “well maybe” comments and grins from my elk hunting partners. Even though each year I found the experience to be refreshing and enjoyable, there was no doubt I was feeling my age. Hours passed as I slowly moved through the forest.

Stopping for a mid-morning rest, I settled down on a large windfall, easing back to relieve the weight of the backpack from my shoulders. Unsnapping the chest and waist straps, I wiggled free, breathing deep at the feel of comfort. High on a ridge the view was breathtaking. The words to the song “America the Beautiful” harmonized my thoughts as I watched the lifting sun cast a “purple mountain majesty” on the towering snow-covered granite peaks of the distant mountains.

Mentally directing the choir was suddenly interrupted when I caught a glimpse of movement coming out of the nearby canyon. I immediately focused on a small grove of young pine trees as a large cow elk stepped out. Her head was bent downward, low to the ground as if trying to pick up predator scent. She moved slowly, one soft step at a time. I quietly sucked in a deep breath of air, trying desperately to slow my adrenaline fueled, pounding heart. Behind the cow stepped her calf, then another two cows. The four were making their way up the trail, headed right at me! I watched intently for the bull I hoped would be close behind.

The next couple of minutes the elk slowly made their way closer to me, feeding at times along the way. I leaned into a nearby young pine to hide. Then not seeing any bull, I slowly reached into my orange vest pocket and removed my video camera. There are no cow permits in this area, so a nice video would have to suffice. I’d challenge myself to see if I could do it without them knowing.

At 10 yards, holding the camera on my lap, I touched the on button. I couldn’t look up, the lead cow had moved to within five yards of me. I had to look down through the camera monitor to see her. The cow was so close I could reach her with the barrel of my rifle. She stepped again. I watched her on the video screen, she was looking down at the top of my cap. Nearing a state of panic at the danger of being so close, I tried in vain to keep from moving but felt a slight quiver ripple through me — the elk sensed it too.

In a fraction of a second they spun and exploded like a dragster off the starting line. Dirt flew from their hooves, landing against my pants as the foursome thunderously rumbled away, breaking limbs and branches that were in their exit path. I kept the camera rolling to catch the action. As they disappeared into the cover I shivered, excited and happy. However, the roller coaster of emotions was about to take another turn...

I had but a few seconds to sense an inner peace at what had just happened, then all the good vibes came to a crashing end, replaced by a wrecking ball inside my head when I heard limbs pop behind me and turned just in time to see a dandy, branch-antlered bull make a quick exit over a ridge and into the dark timber. The bull would have been in plain sight had I seen him sooner. After fighting the knot in my gut and a bit of frustration and disappointment for a few minutes, and when I really felt more like crying, I instead found the humor in it all. I’m certain the monarch met up with his lady friends later that day and thanked them for keeping my attention while he snuck past me. That’s what I love about elk hunting. No two days are ever the same — always expect the unexpected.

The sun had moved toward the western horizon, the light morning clouds had faded away into streaks of transparency and the autumn air was cooling as the afternoon shadows stretched across the landscape. It would be dark soon. I needed to start my descent down the mountain toward camp.

As I worked my way down the mountain, now only about a mile from camp, I sorted out my feelings of gratitude. I believe in giving the animal I pursue a nod of recognition and appreciation at the end of each day of hunting. I guess it’s a way of showing respect. And so, as the sun disappeared and darkness approached, I stepped out of the dark timber onto an old closed logging road. Turning to look back up the mountain briefly, I tipped my cap, then headed to camp.

It was now too dark to shoot. Hunger was replacing the passion of the hunt. The sandwiches I’d put in my backpack before were now spent energy. My brother, Jim, is a master chef (at least as far as our elk hunting party is concerned). He’d promised baked potatoes and pork chops hot off the barbecue.

I felt somewhat like a mouth-watering rabid dog as I felt my pace pick up the closer to camp I got.

I have often said when you come up empty handed on a day (or season) of elk hunting, there are still a lot of reasons for feeling good such as Jim’s awesome meals fed around the flickering campfire with other hunters, listening to their tales while under the umbrella of a star-filled sky. Well, I guess happiness is where you find it. I have found happiness along a trail in Eastern Oregon.

Jerry Chartier of Roseburg, has written “Outdoor Tales” for The News-Review for 32 years. This October will be 45-years that he’s hunted the trails of North Fork in the John Day Wilderness. His hunting companions have remarked that they believe he’d rather take a video of an elk than shoot one. Jerry smiles when he answers by saying, “I love to hunt…”

Chamber Corner: Elkton re-opens
This Roseburg VA nurse chose to help out a struggling VA in one of the cities hardest hit by COVID-19