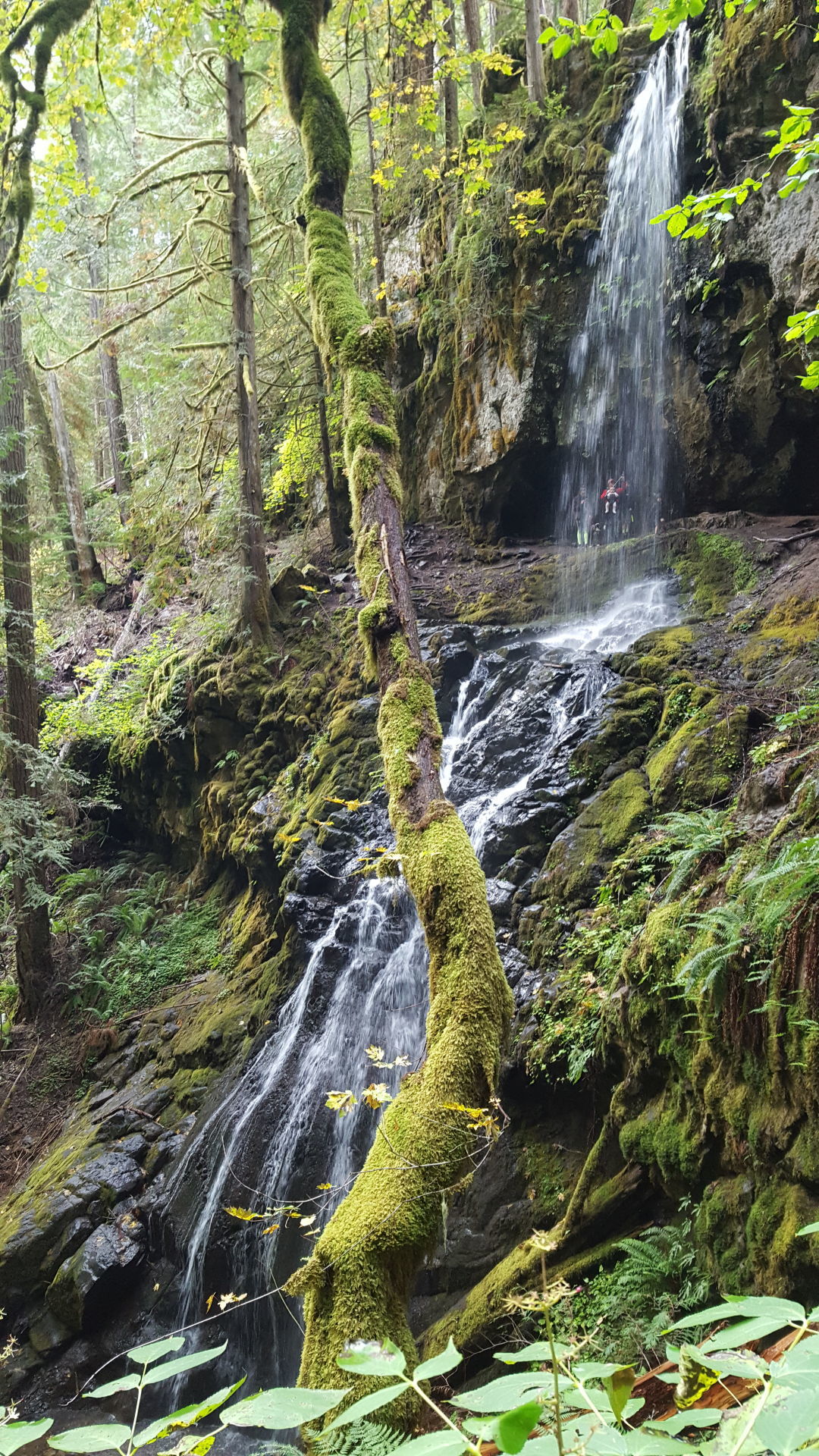 The trail skirts behind the waterfall of Upper Trestle Creek Falls this past September. The trail leading to the falls was covered with debris from the snowstorm that hit Douglas County this past winter. 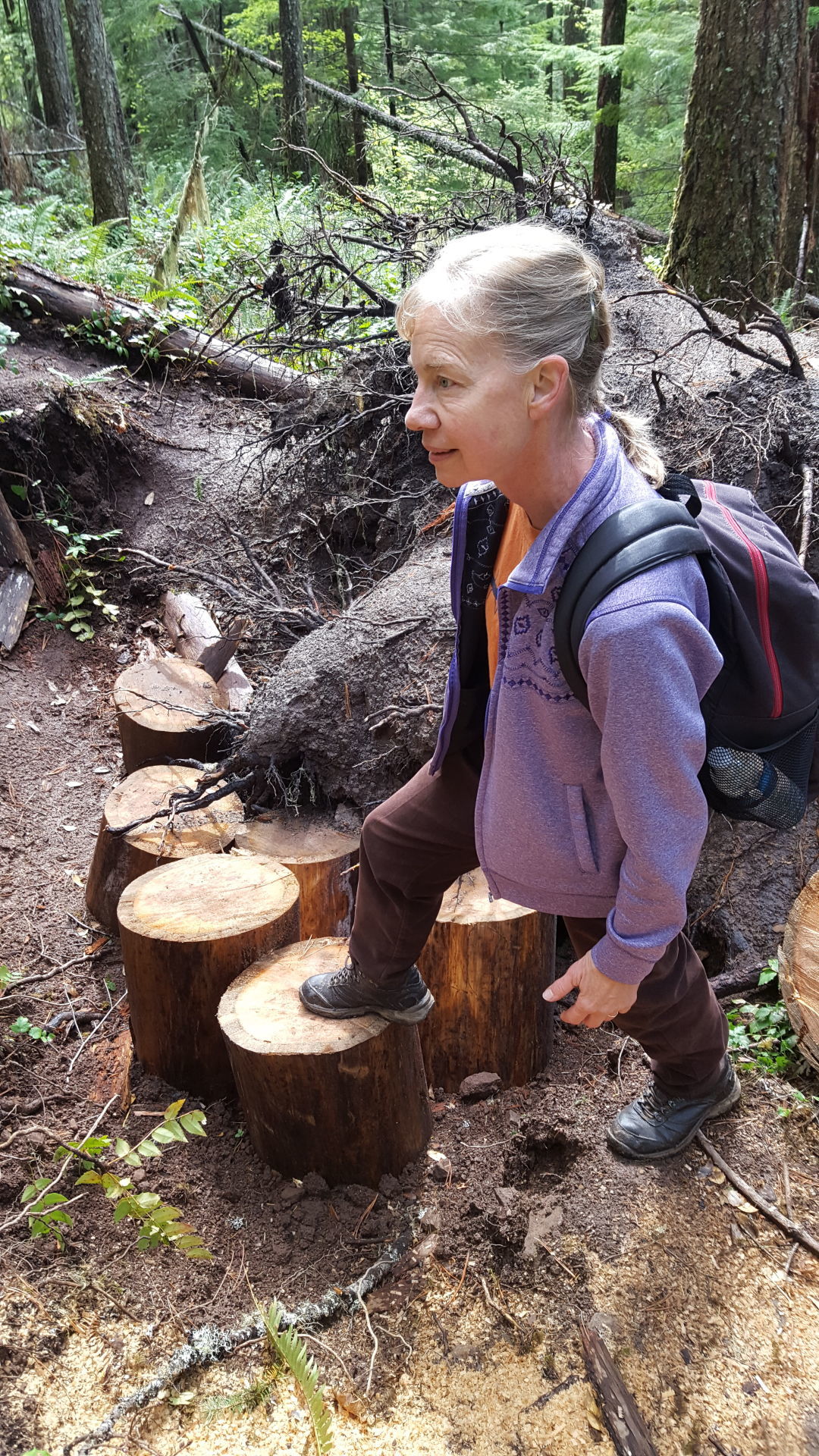 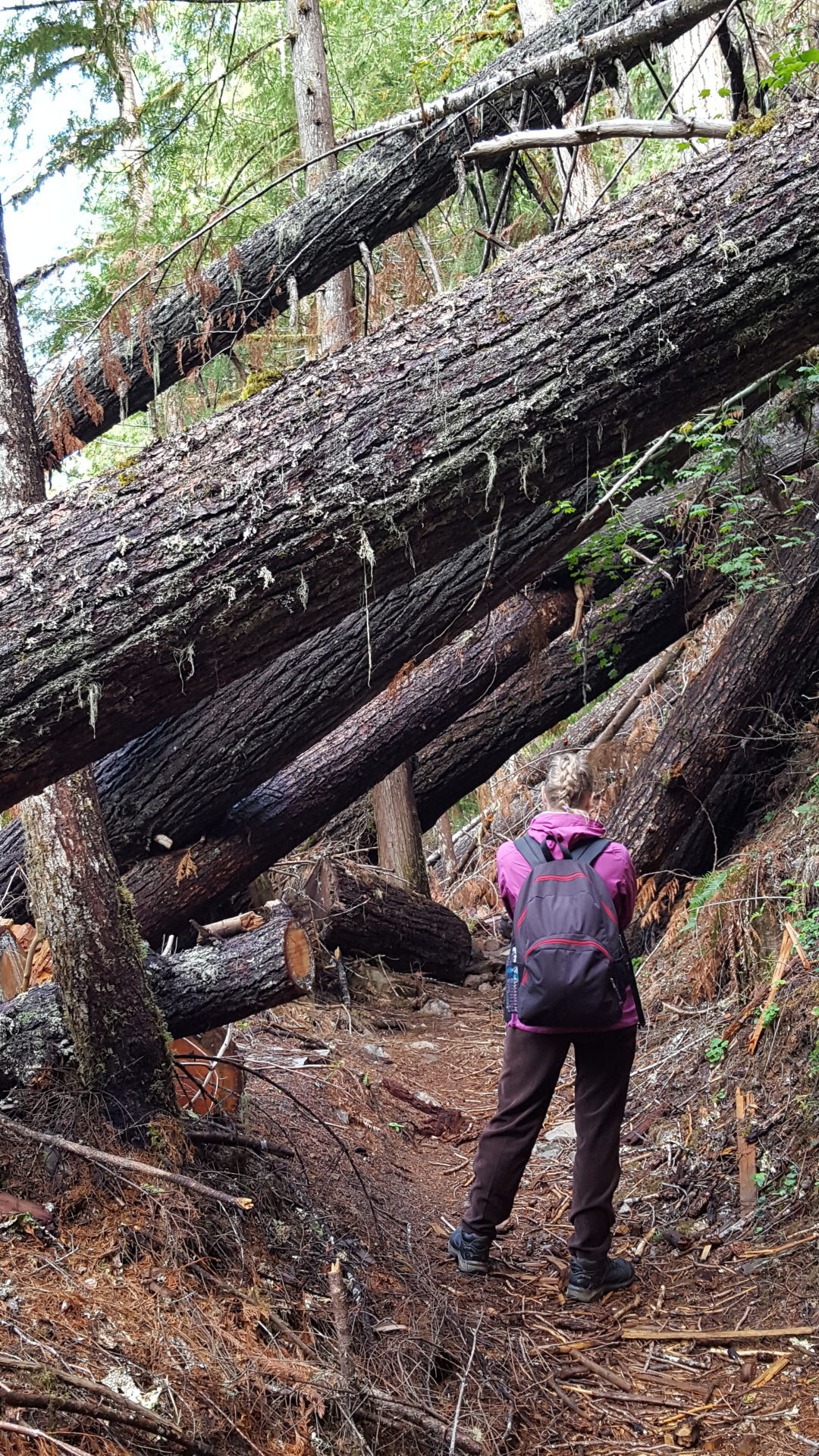 Carol Lovegren Miller looks over an obstacle on Trestle Creek Falls hiking trail is still covered by hundreds of old-growth trees downed during the February 2019 snowstorm.

The trail skirts behind the waterfall of Upper Trestle Creek Falls this past September. The trail leading to the falls was covered with debris from the snowstorm that hit Douglas County this past winter.

Carol Lovegren Miller looks over an obstacle on Trestle Creek Falls hiking trail is still covered by hundreds of old-growth trees downed during the February 2019 snowstorm.

Last winter, southern Oregon’s “Snowmageddon” did more than inconvenience. and sometimes paralyze, people by shutting of their electricity.

In the woods between Roseburg, Elkton, and Eugene, countless trees were knocked down — a detail that did not occur to my husband and I when we set out to explore the 4½ mile Trestle Creek Falls Loop hiking trail.

Because the northernmost reaches of the Umpqua National Forest are largely unfamiliar to us, we first stopped at Cottage Grove Ranger Station just below Dorena Lake. A half an hour later and $14 poorer, we clutched a new map and handy-dandy trail booklet in our hands. The Forest Service personnel’s warning about the condition of the Upper Trestle Creek Falls Trail gave us pause, “HAZARDOUS TRAIL CONDITIONS AHEAD, SEVERE WINTER STORM DAMAGE, USE CAUTION.”

If either my husband, Kyle, or I had a lick of sense, we would have followed the office staff’s recommendation of an alternative hike. Instead, we obstinately drove up to Champion Creek Trailhead, parked, and headed down the Brice Creek Trail which junctions with both Upper and Lower Trestle Creek Falls trails.

Disappointingly, our new map opted not to join us and instead took a nap in the car.

We were impressed with the tunnels and bridges the trail clearing crew had cut through old-growth trees jack-strawed into impressive tangles along miles of trail. Steps carved into some of the massive logs boasted some mighty fancy checkerboard and striped patterns.

Furthermore, the crew provided innovative jerry-rigging where every kind of root-wad damage you can imagine disrupted the trail. One tree that had bravely rooted on nearly vertical shale, had peeled off the slick bare rock face like a banana peel. Another particularly large root-wad crater had firewood rounds placed like wobbly stepping-stones to assist in crossing. In many places, trees had flipped completely upside-down with their tops disappearing down into the canyon. At one point we were startled to realize we were hiking over the top (or would that be bottom?) of a root wad.

As promised, there were a few somewhat challenging scrambles, but that just made the trail more interesting. We were impressed that nearly all of the trees were cut out of the trail all the way up to Upper Trestle Creek Falls. Upon arrival at the upper falls, we hunkered down on comfy rocks in the grotto behind the thin curtain of water and felt pretty good about our accomplishment while we savored chicken salad sandwiches and crisp, juicy apples. Our pride bubble burst, however, when an excited four-year-old came running up to the falls trailed by an older brother and mother carrying a baby in a front pack.

The last 1½ miles of trail, down the east side of the loop, was an obstacle course. The trail clearing crew had not even begun to tackle this segment’s massive tangled mess. A short distance into scrambling up, over, and under the often-enormous logs, we questioned whether we should retrace our steps and hike back the way we came. We decided that surely the trail wouldn’t continue to be so bad. It would.

As we crawled under and over innumerable windfalls, finding ourselves becoming tree-huggers for the first time in our lives, we decided that this wasn’t anything a 20-year-old couldn’t easily handle… and heck, we’ve both been 20 three times!

We tottered back to our car (and lazy map) less than four hours after we started. Our energy secret? I found a stash of ancient melted and re-hardened Snicker’s fun bars in one of Kyle’s rucksack pockets. This was a 4-candy bar trail. Not bad for one of the most fun hikes we’ve undertaken in years.

Extension Spotlight: Things to consider when planning a nature trail on your property

Extension Spotlight: Bugs, drought and fire: what’s the future look like for our forests?