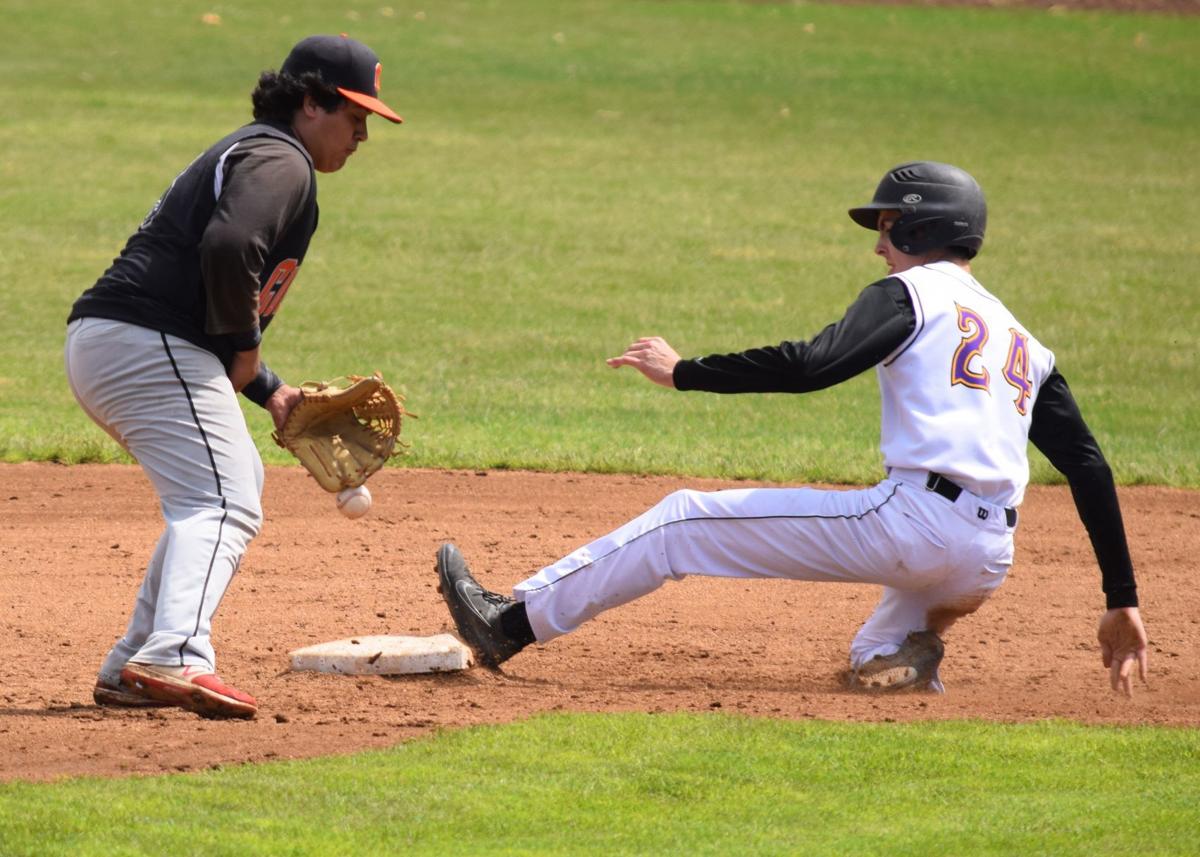 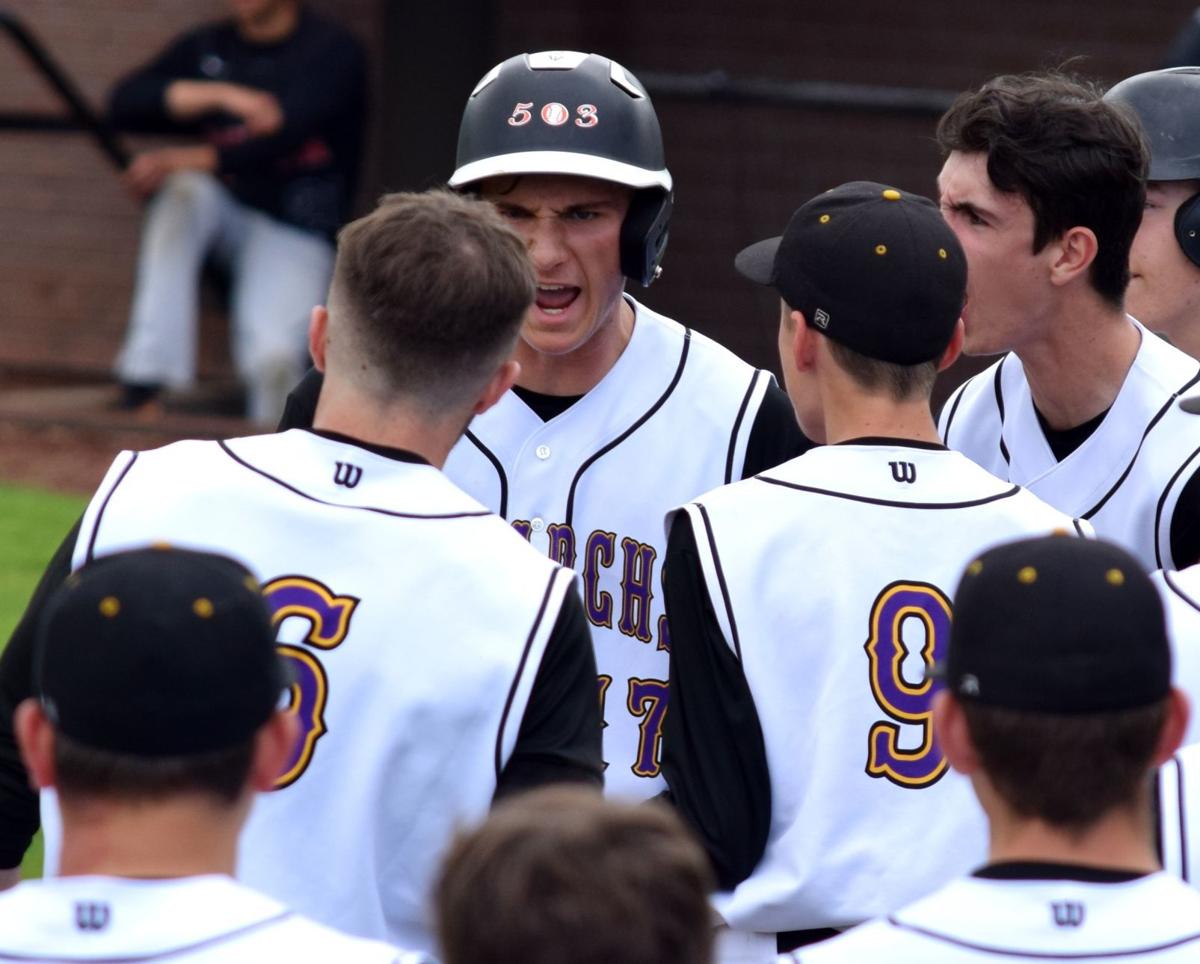 Umpqua Valley Christian’s KC Pettibone celebrates with teammates Wednesday after hitting a solo home run during the third inning against Culver at Legion Field in Roseburg. Pettibone’s home run was the first of 13 unanswered UVC runs in the Monarchs’ 13-0 playoff win. 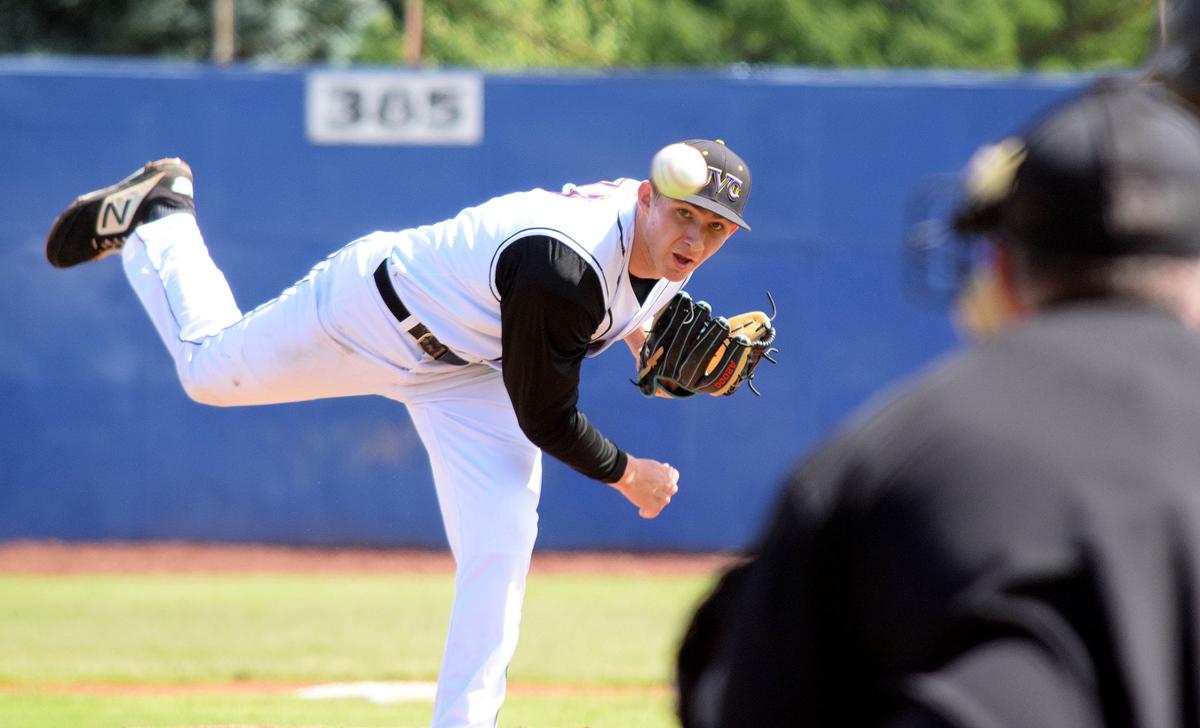 Umpqua Valley Christian’s KC Pettibone throws a pitch to a Culver batter during the first inning of Wednesday’s Class 2A/1A playoff game at Legion Field in Roseburg. Pettibone struck out 10 in five scoreless innings during the Monarchs’ 13-0 win.

Umpqua Valley Christian’s KC Pettibone celebrates with teammates Wednesday after hitting a solo home run during the third inning against Culver at Legion Field in Roseburg. Pettibone’s home run was the first of 13 unanswered UVC runs in the Monarchs’ 13-0 playoff win.

Umpqua Valley Christian’s KC Pettibone throws a pitch to a Culver batter during the first inning of Wednesday’s Class 2A/1A playoff game at Legion Field in Roseburg. Pettibone struck out 10 in five scoreless innings during the Monarchs’ 13-0 win.

Culver High School’s baseball team had a tough time hitting off of Umpqua Valley pitcher KC Pettibone on Wednesday. It also turned out the UVC junior had a key hit the Bulldogs couldn’t catch, either.

Pettibone struck out 10 over five innings and put the Monarchs ahead to stay with a solo home run in the third inning as UVC thumped Culver 13-0 to advance to the quarterfinal round of the Class 2A/1A state baseball playoffs.

“That was huge,” UVC coach David York said. “The last couple of years when we played in the first round, we played a little tight, so we needed something to kind of get us going. That’s why KC’s hit was so huge.”

It paved way to a huge margin of victory for the fourth-seeded Monarchs (24-3), who became the first of three Douglas County baseball teams to move into the classification’s state quarterfinals. They’ll host one of them — Reedsport — after the fifth-seeded Brave dispatched of Glide later on Wednesday.

First pitch is slated for 4:30 p.m. Friday at Legion Field, with the winner playing either top-seeded Knappa or Regis on May 28. After Wednesday’s victory, the Brave (22-1) have won 22 consecutive games.

“We definitely had a lot of scoring opportunities at the beginning of the game that we should have taken advantage of,” Guastaferro said. “Once we calmed down, we started hitting the baseball well to drive those runners in.”

Pettibone was in command from the start, allowing two hits and two walks while recording six of the game’s first seven outs via strikeout. His one-out solo home run in the third came after the Monarchs had stranded five runners in the first two innings.

Culver (14-14), which advanced with its 13-1 win over Central Linn in the first round, never found its offense against UVC. The Bulldogs were limited to three hits and only had one batter reach second base.

“When our team puts things together, we’re a pretty tough squad to beat,” Pettibone said. “For me, it was about staying relaxed and keeping that standpoint that that was my mound and that no one could hit me while I was out there. It was being confident, but not cocky.”

Pettibone’s one-out shot over the left-field fence put the Monarchs ahead to stay, and Buechley made it 2-0 later in the third with an RBI single to drive in Isaiah Heard. Heard later capped a four-run UVC fourth inning with a two-run single, and Guastaferro’s double, in the regular season, would have kicked in the 10-run mercy rule.

There’s no run rule in playoff baseball in Oregon, however, which allowed the Monarchs to tack on three more runs in the sixth. CJ Gale’s RBI single to drive in Mahoney from second base capped the scoring.

Jon Mitchell is a page designer, photographer and writer for The News-Review. He can be reached at 541-957-4214, or by email at jmitchell@nrtoday.com. Follow him on Twitter @byJonMitchell