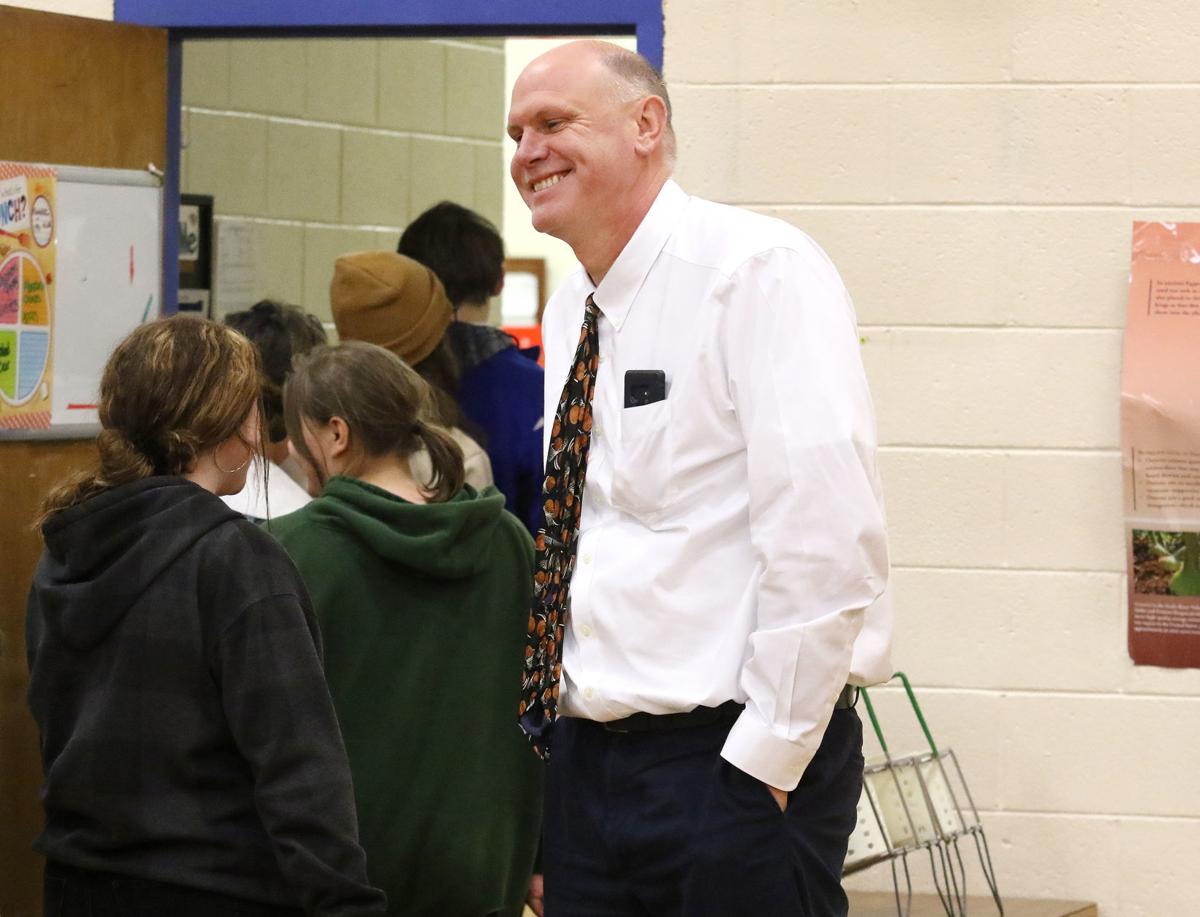 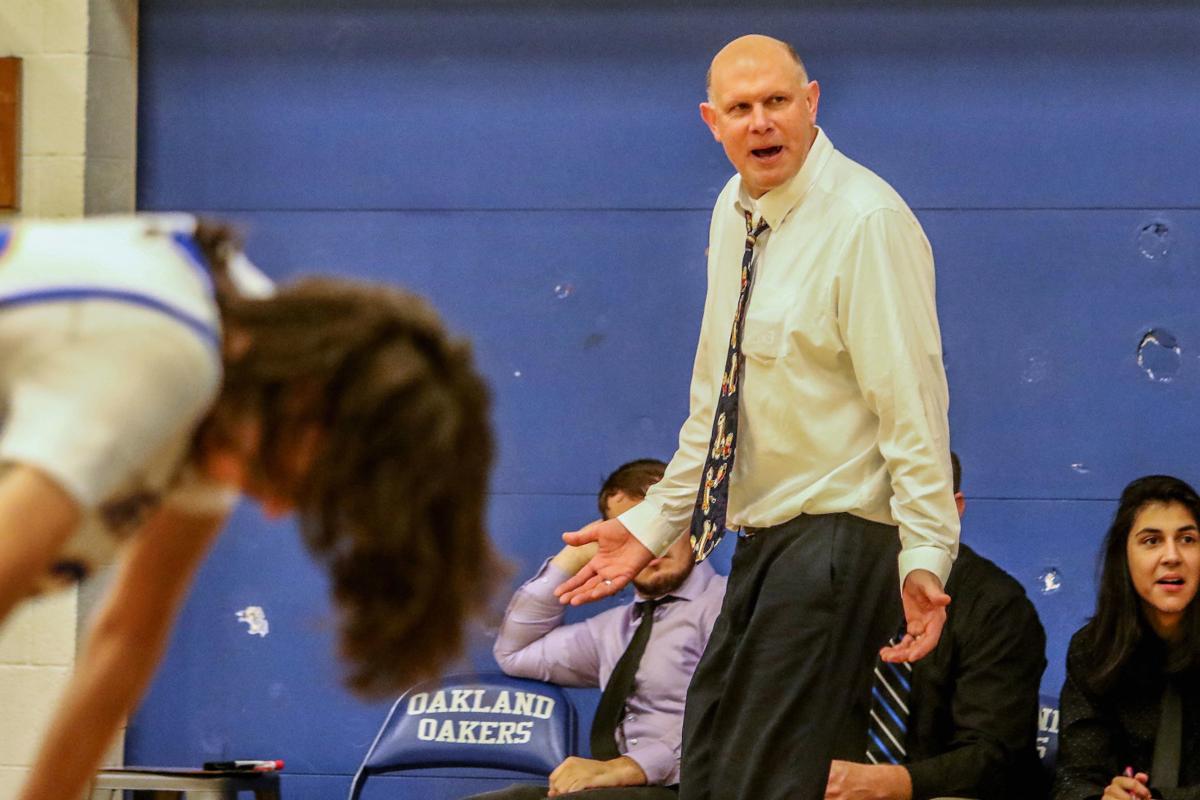 Oakland High School boys basketball coach Jeff Clark reacts to an official’s call during a Central Valley Conference game earlier this season at the Nut House. Clark has guided the Oakers to three Class 2A state titles, winning 549 games over 26 seasons. Oakland is 21-3 overall this season.

Oakland High School boys basketball coach Jeff Clark reacts to an official’s call during a Central Valley Conference game earlier this season at the Nut House. Clark has guided the Oakers to three Class 2A state titles, winning 549 games over 26 seasons. Oakland is 21-3 overall this season.

OAKLAND — Forgive Jeff Clark if he might be a little tired at the end of the school day.

The 49-year-old, a 1988 graduate of Sutherlin High School, carries a heavy workload at Oakland High School during the winter sports season.

Clark is in his 11th year as the principal and 12th year as athletic director at OHS. After school, it’s over to the basketball court, where the 6-foot-9 Clark has evolved into one of the top prep coaches in Oregon over 26 seasons. He ranks 13th on the all-time Oregon high school basketball list for wins with a record of 549-159.

The Oakers have captured three Class 2A state championships under his watch, winning in 2000 (30-0 record), 2006 and 2013. They finished second in 2014. They’ve advanced to 14 state tournaments in Pendleton, bringing home 11 trophies.

On the family side, Clark and his wife, Christina — a counselor at the high school and a former volleyball coach at OHS — have a 7-year-old daughter, Kaylee.

Clark arrives at work at around 7 a.m. during the weekdays. With basketball, the day will extend well into the night and he may not get home until after midnight due to games on the road.

“I have a really supportive family,” Clark said in his office at OHS earlier this week. “It really helps that Christina works here and understands the school system and understands what it takes to be able to maintain those responsibilities and do it a week at a time.”

Clark attempts to be consistent when dealing with teenagers, whether it’s during school hours or on the hardwood.

“I try and approach all of my responsibilities with the same philosophy and perspective I use with coaching,” he said. “I do that with my students, staff and everyone else. Teaching and trying to get them to learn what the expectations are, but having high expectations and standards for them to push, too. Helping them get some value and buy-in as to what we’re trying to do and get them on the same page to what our in-goals are.”

Being the principal has its challenges, according to Clark.

“When I was a teacher for 15 years, I was teaching juniors and seniors. I felt like I built a better relationship with them because I had them two years in a row. When I became principal, I felt like I probably didn’t get as deep a relationship with those kids, but widened it out and was able to build a good rapport with freshmen and sophomores that I wasn’t able to do as a teacher.

“I feel I have a bigger influence with the entire school as a principal. It takes a lot of energy and brings a lot of frustration with it at times, but I do feel like it’s pretty impactful.”

Clark has really made his mark coaching the Oakland boys basketball team. The Oakers have never had a losing season under Clark — they were 10-10 in his first season in 1994-95.

He’s had opportunities to go coach elsewhere, but decided to stick with the Oakers.

“I never could take the step to leave Oakland,” said Clark, who lives in Sutherlin. “Oakland is an amazing community and we have amazing support for our school — the school is kind of the center of the community. We have a great teaching and support staff. It was too hard to leave what we had here and try something new.

“I don’t regret it at all. I think it’s been a great run here and definitely wouldn’t change it.”

The Oakers are a state contender once again this season. Oakland (21-3, 11-0 CVC) has won 17 straight games and on Tuesday defeated Jefferson 75-60 at the Nut House to clinch the outright Central Valley Conference title.

The Oakers are ranked No. 6 in the OSAAtoday 2A coaches poll.

“We’ve had our ups and downs. It’s been a tough year coming together as a group,” Clark said. “We brought three returners back from last year who played a lot and a couple of other guys who were role players. Everyone has a different role this year. We’ve gotten better all year and are starting to hit our stride.”

Clark is pretty intense on the sidelines during a game. He feels he does a better job these days of getting over a loss.

“I don’t know if mellow is the right word, but I would say I’m at least a little more intelligent,” Clark said. “I’m very passionate when I coach; I want to get the most out of the kids and the energy and intensity of the game is part of it as well. I think I’ve matured as a coach.

“Having a daughter has helped. In the past, we’d lose a game and I’d spend two days worth of sulking and pouting and trying to figure out what we need to do better. (Kaylee) has given me a lot of perspective on it. While losses are still hard to take, I’m probably a little bit better about compartmentalizing it and closing the door on it and moving to the next one.”

Willis New was Clark’s varsity basketball coach at Sutherlin. Clark played on some very talented teams, including his senior year in 1988 when the No. 1-ranked Bulldogs won 22 straight games before dropping their final two in the Class AA state tournament at University of Oregon’s McArthur Court — they lost 61-33 to eventual state champion Central in the semifinals and fell 62-61 to Sweet Home in the third-place game — to come up short of a trophy.

Clark figured out he wanted to be a coach at that time. He went on to play college basketball at Idaho State University and Western Oregon University.

“That’s one of my driving forces,” he said of those missed opportunities his senior season at Sutherlin. “I still remember the last shot I took and the mistake I made and same with college. I wouldn’t say that haunts me, but it definitely drives me.”

New retired last year at Sutherlin following his second stint as head coach. He guided the Bulldogs for 23 years, winning the Class 3A state championship in 1997 and compiling a 402-247 record at Yoncalla and Sutherlin.

New calls Clark and Kyle Crane (a guard on the 1997 team) the two most competitive players he coached in high school.

“After coaching him and watching him play at the college level, it doesn’t surprise me Jeff entered education and coaching,” New said. “Probably the main reason was he was a decorated player at the high school level. Those competitive juices just don’t go away.

“Jeff was a tremendous competitor, and it carried over to his coaching, teaching and administrative work. No, it doesn’t surprise me he’s had success over the years. He’s a very accomplished young man.”

And New isn’t surprised Clark chose to stay at Oakland instead of pursuing so-called greener pastures.

“The family piece was the most important thing in holding him in this area,” New said. “His love of the area and family ... I think he made some pretty good choices.”

Clark appreciated having New as a coach.

“Playing for Willis was great,” Clark said. “One of the things I picked up from him that’s stuck with me is the next step of being a coach. You’re not just in charge of the team — it’s also about developing the kids as people and turning them into good human beings. Making that tie and being there for the kids, trying to guide them to make the right choices.”

What: The principal, athletic director and boys basketball coach at Oakland High School.

Background: Graduated from Sutherlin High School in 1988. Was a first-team all-state center in Class AA as a senior, leading the Bulldogs to a 22-2 record. Was selected the Sky-Em League Player of the Year. Played collegiately at Idaho State University and Western Oregon University. Has been the head boys coach at Oakland for 26 years, compiling a 549-159 record. The Oakers won 2A state championships in 2000, '06 and '13.