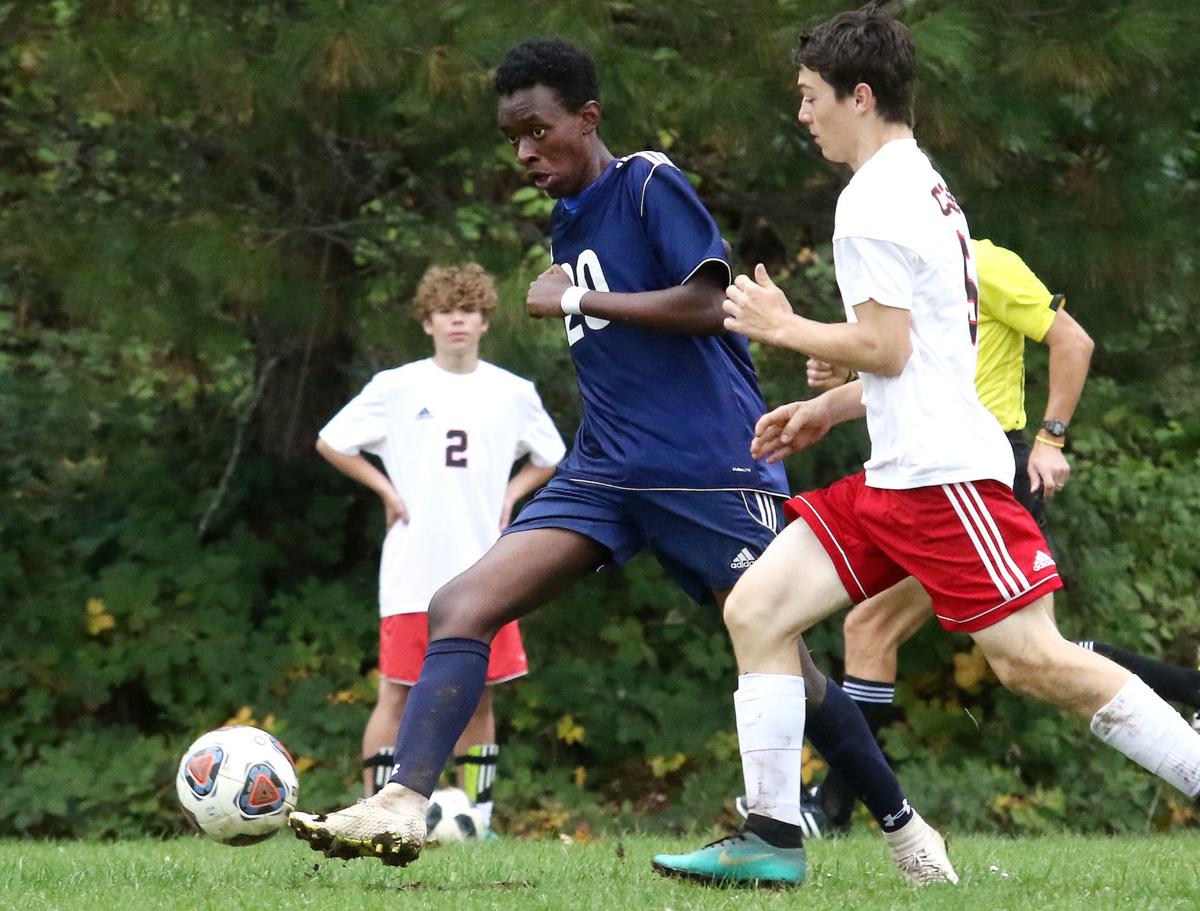 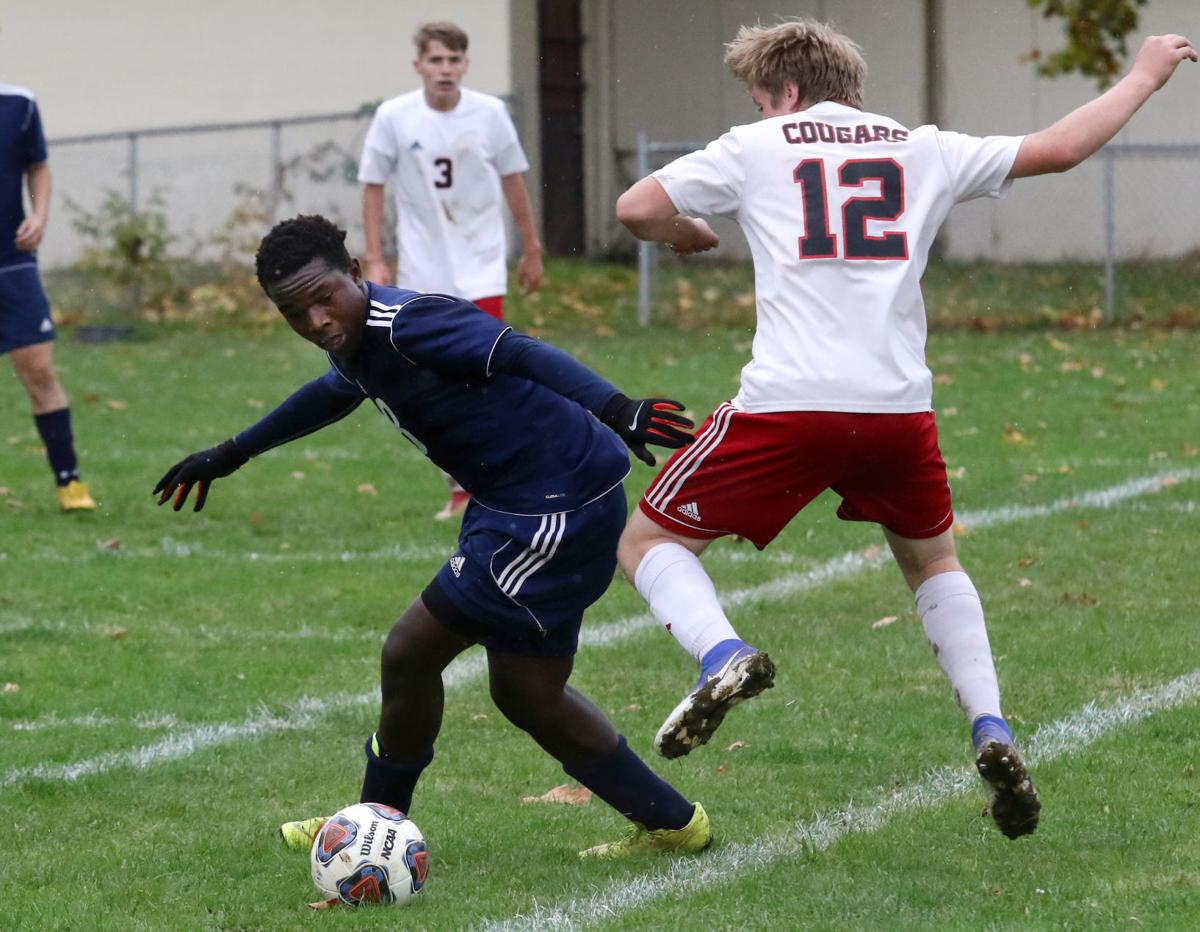 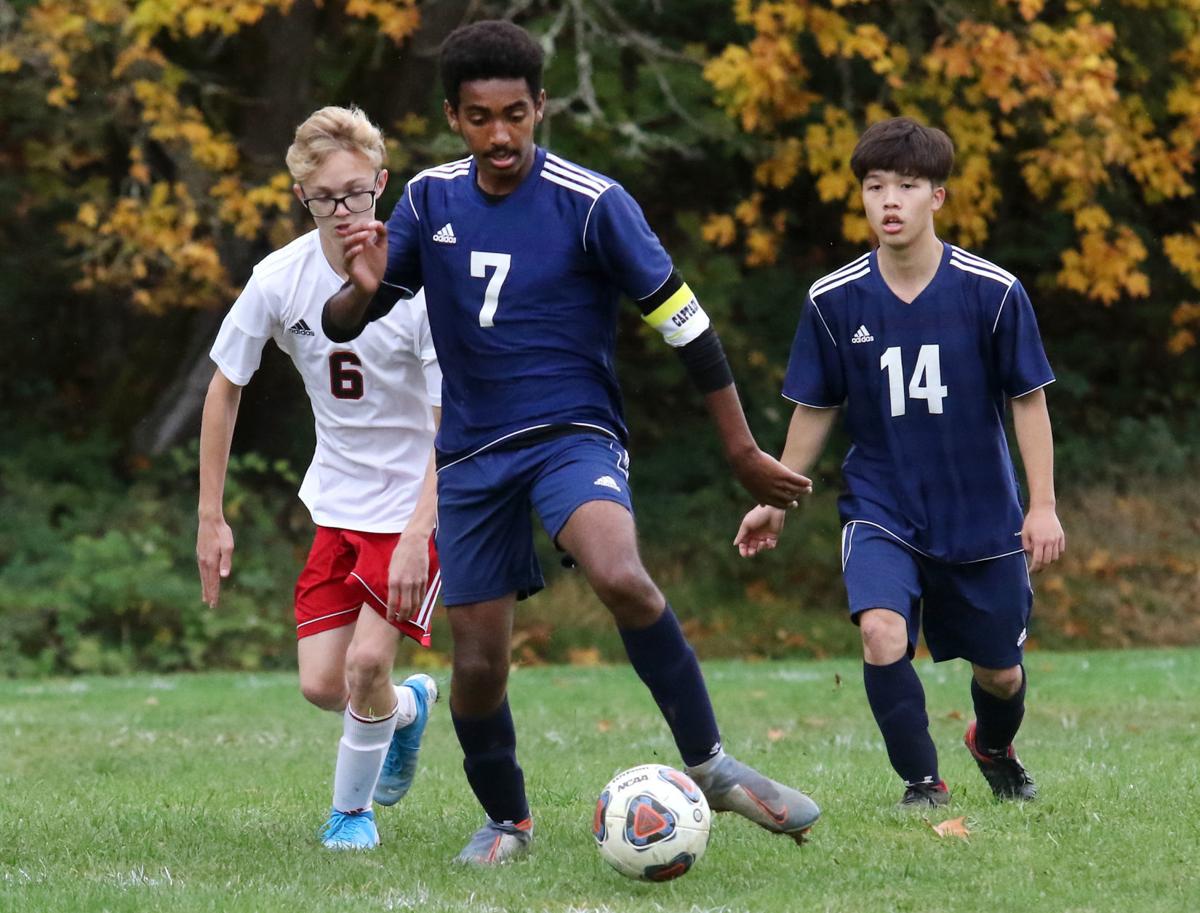 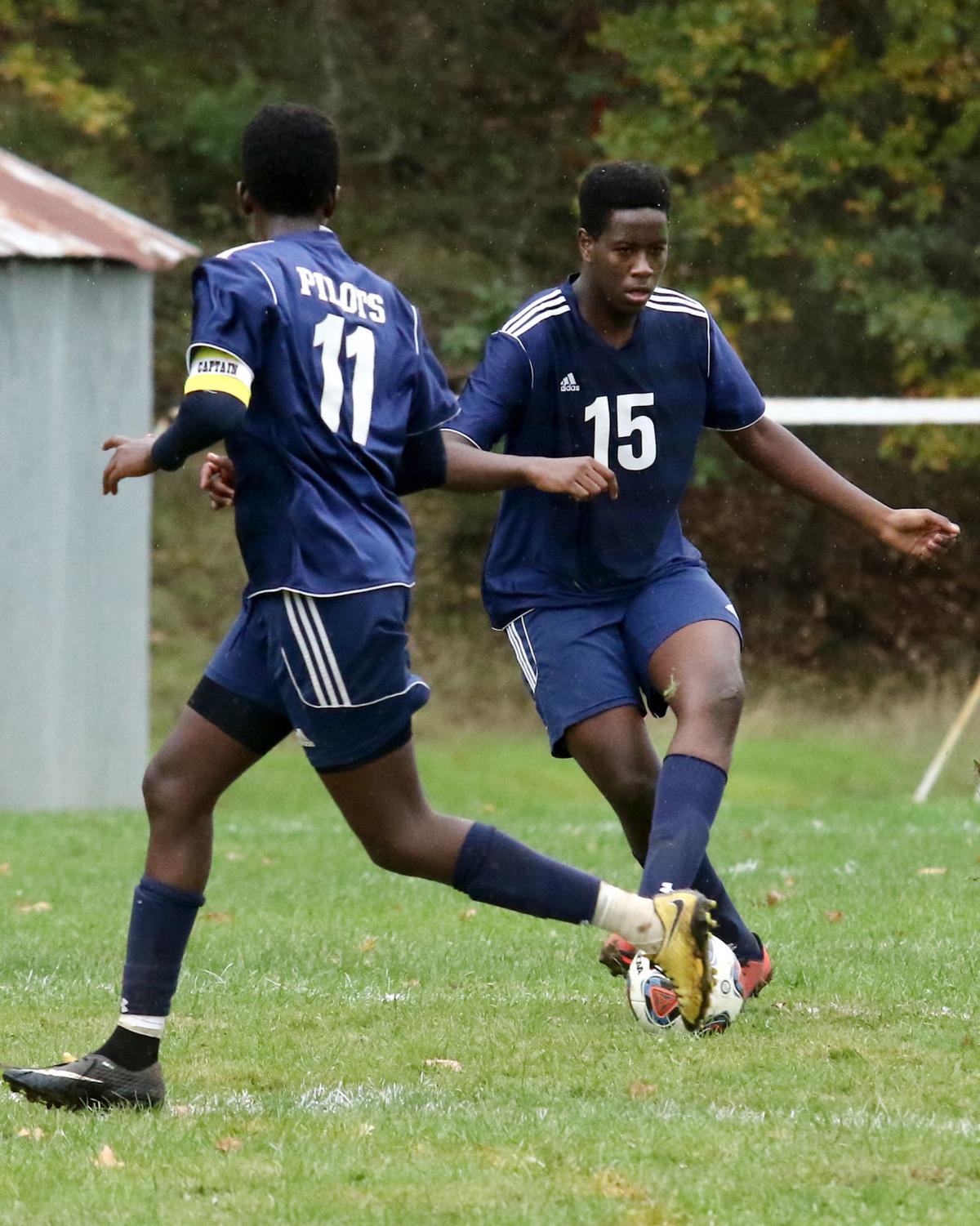 Canyonville Academy’s Kenny Cyusa (15) passes to teammate Amuary Ndagijimana during the second half against Illinois Valley Saturday in Canyonville. 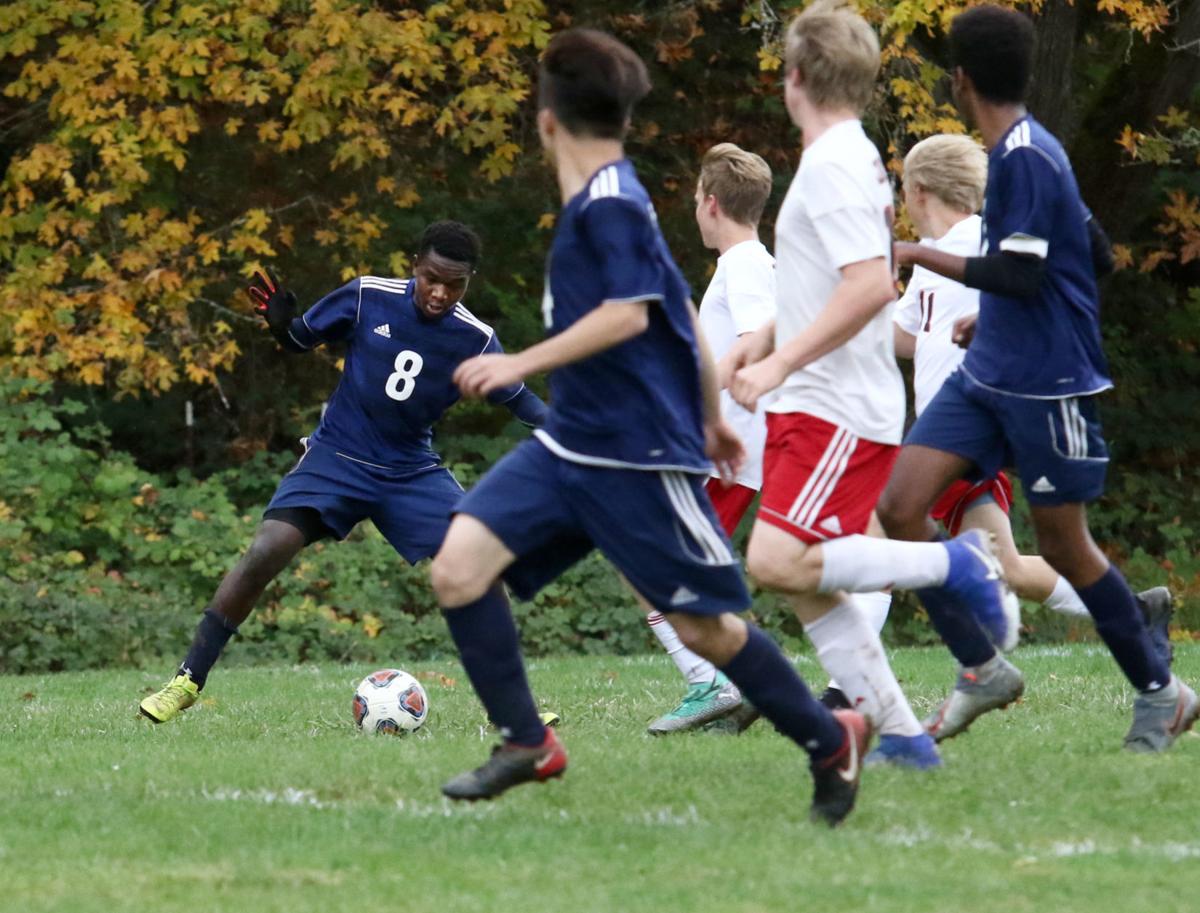 Canyonville Academy’s Robert Mugisha controls the ball during the second half against Illinois Valley Saturday in Canyonville. The Pilots won, 4-0. 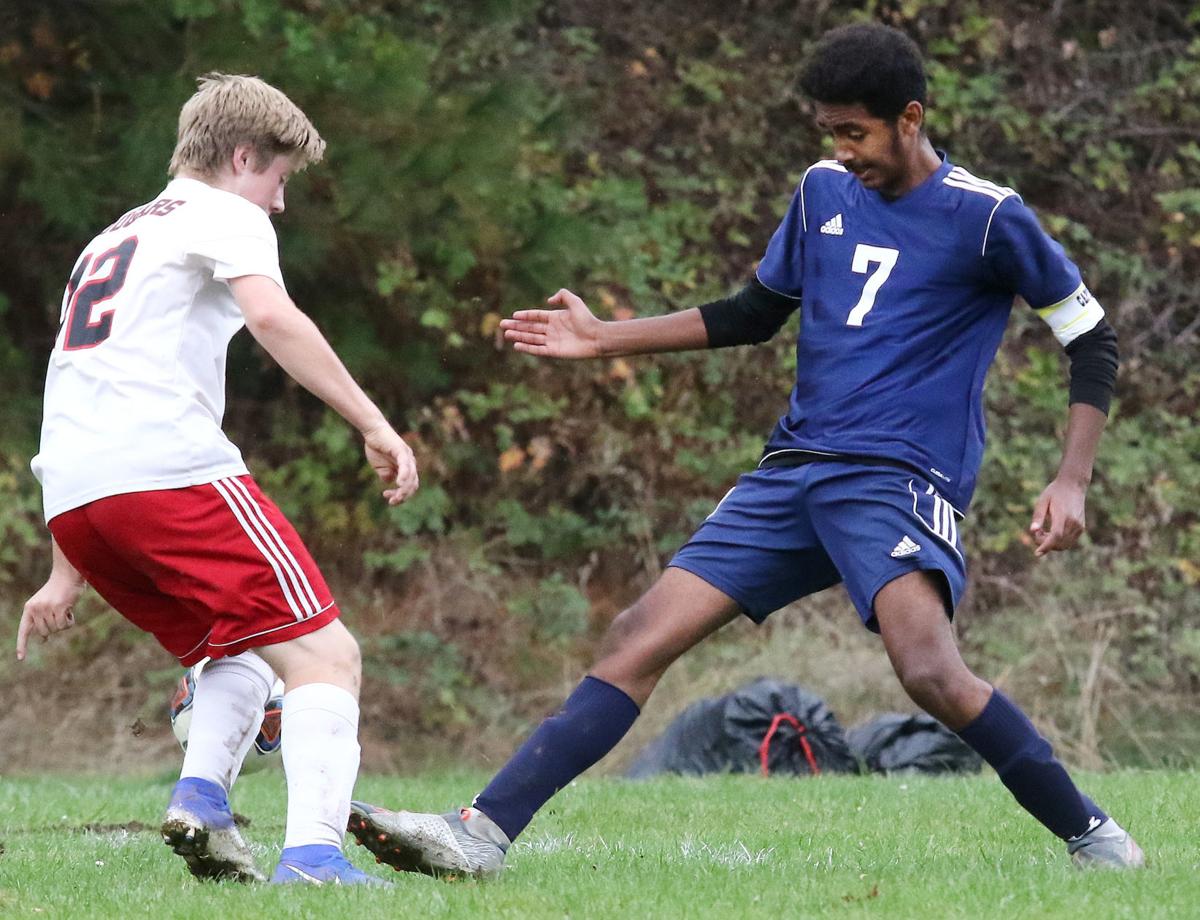 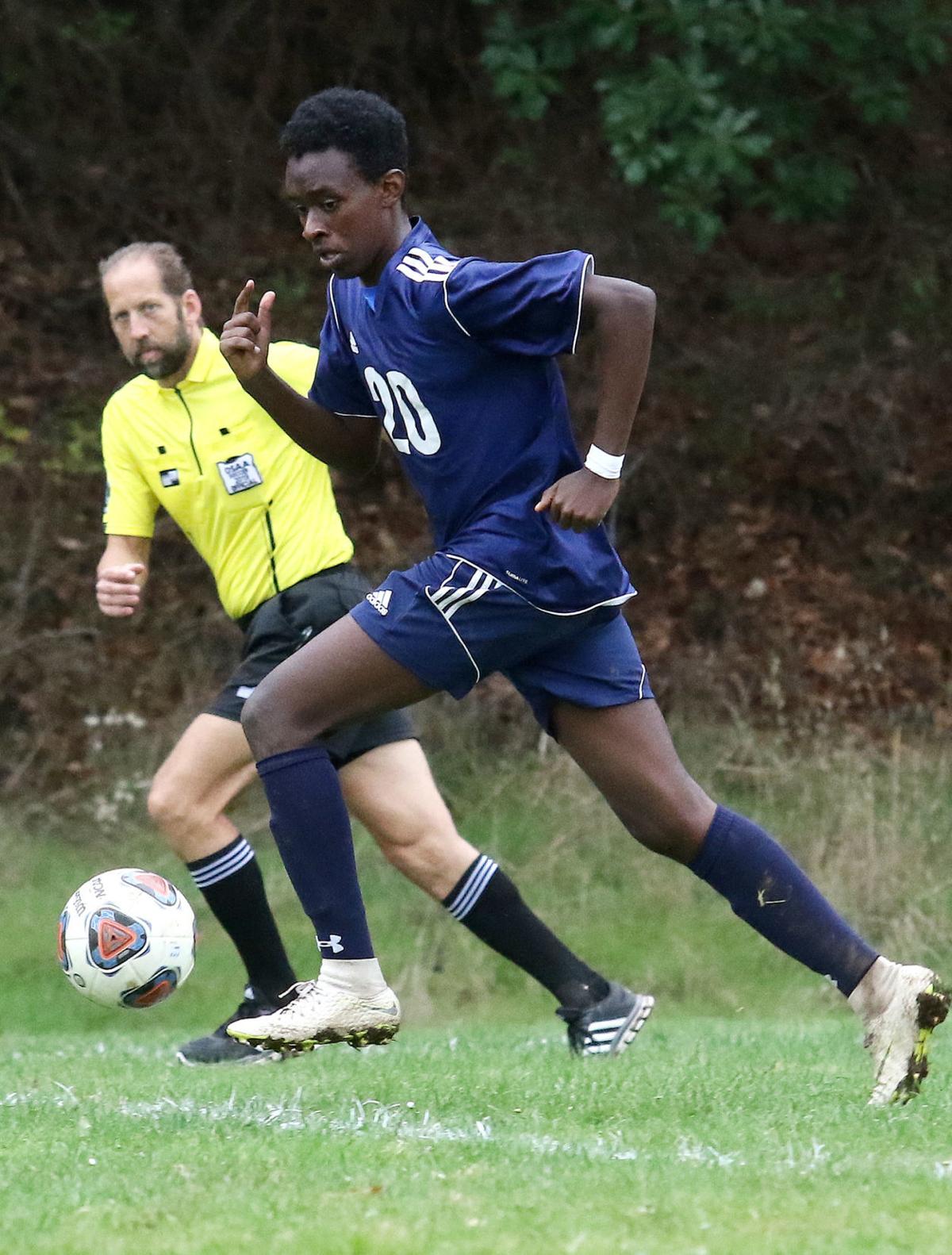 Canyonville Academy’s Benit Nzamwita dribbles upfield during the second half against Illinois Valley Saturday in Canyonville.

Canyonville Academy’s Kenny Cyusa (15) passes to teammate Amuary Ndagijimana during the second half against Illinois Valley Saturday in Canyonville.

Canyonville Academy’s Robert Mugisha controls the ball during the second half against Illinois Valley Saturday in Canyonville. The Pilots won, 4-0.

Canyonville Academy’s Benit Nzamwita dribbles upfield during the second half against Illinois Valley Saturday in Canyonville.

CANYONVILLE — The Canyonville Academy boys soccer team earned its seventh win of the season on a cool, damp Saturday afternoon, shutting out Illinois Valley 4-0 in a Special District 5 match.

The players on the Pilots’ 2019 roster come from all over the world — Taiwan, Ethiopia, Rwanda, South Korea, Colombia and the United States.

The coach, Jeremy Gerlach, is the head house dean at Canyonville Academy. The 41-year-old is a 1997 graduate of Brookings-Harbor High School.

Founded in 1924, Canyonville Academy is a private boarding Christian school. Canyonville is a Class 2A school.

“It’s been fun to get to know all of them,” Gerlach said. “As the dean, I’m kind of like a house parent as well. Sometimes it makes things a little tough because I’m dealing with grades and behavior, but getting them on the soccer field is a break for me. I love it.

“I have a good team this year. I have a lot of seniors and they have a lot of skill, so it’s just trying to get all of that pointed in the right direction and get them into shape and working together.

“One of the problems we have at the start of the year is a lot of our kids haven’t played together like most of the other teams. We have to mesh them together quickly and see what we’ve got and work with it. We have some pretty high-energy kids.”

Some of the players on the Canyonville team have brothers, sisters or friends who graduated from the school.

“Canyonville Academy is a really diverse school,” said senior defender Leon Ku, who’s from Taiwan. “I learn English and learn my academics, but I learn cultures from along the road. The team’s very friendly and is encouraging me to become a better player and teammate.”

“It’s been amazing ... amazing in many ways,” said Dagem Ayalew, a senior forward who hails from Ethiopia. “Learning how to live with people and everything. We’re not used to playing with different countries, so it’s pretty interesting to see how people play.

“It’s been life changing coming here. It’s made me a better person.”

Senior Robert Mugisha, a senior midfielder from Rwanda, aspires to be a professional soccer player.

“It’s been a positive experience,” added Angelo Twagirumukiza, a senior midfielder from Rwanda. “My sister first came here and she liked the school, so my parents said why don’t you go to this school. I like it.

“I like our team this year. We have nice chemistry and know each other more. Coach (Gerlach) is a nice guy. He understands everybody and knows how to treat everybody.”

Amuary Ndagijimana, a senior midfielder out of Rwanda, has enjoyed his time at the school.

“My brother came here two years ago. As soon as he graduated, my parents thought it was a good place and far away from all the distractions and decided to send me here, too,” Ndagijimana said. “The school is great. Everybody takes care of us.”

The Pilots improved to 7-3 overall and in league with Saturday’s win. They’ve already doubled last year’s win total (3-9-3) and are in contention for a berth in the Class 3A/2A/1A state playoffs. The Pilots have outscored their opponents 34-11.

The Pilots will host Cascade Christian on Wednesday. The top two teams in the league get automatic spots in the playoffs, but Canyonville could also receive an at-large berth if its OSAA power ranking is high enough.

“We’re way better than last year,” Ayalew said. “Last year we didn’t know each other and most of us were new, and it was hard to play with each other.”

“Soccer is my favorite sport,” Ndagijimana said. “Back home, my dad and brothers used to play a lot together, so it has a special place in my heart.”

Ayalew scored two goals and had an assist against Illinois Valley. Ndagijimana had one goal and one assist, and Twagirumukiza contributed a goal. Senior goalkeeper Herve Mucyo, from Rwanda, posted the shutout.

Gerlach, who’s guided the Pilots since the middle of last year, has been pleased with the season.

“I feel like we’ve exceeded expectations,” he said. “We had some goals of making the playoffs, and that’s still a possibility. We’ll have to play well the next three games (two of them league). We’ve been doing well, but need to do better against the tougher teams.”

Behind the boom: What goes into setting up a fireworks show
Roseburg fireworks show lights ups sky and parts of Reservoir Hill
© Copyright 2020 nrtoday.com, 345 NE Winchester St. Roseburg, OR | Terms of Use | Privacy Policy
Powered by BLOX Content Management System from TownNews.com.