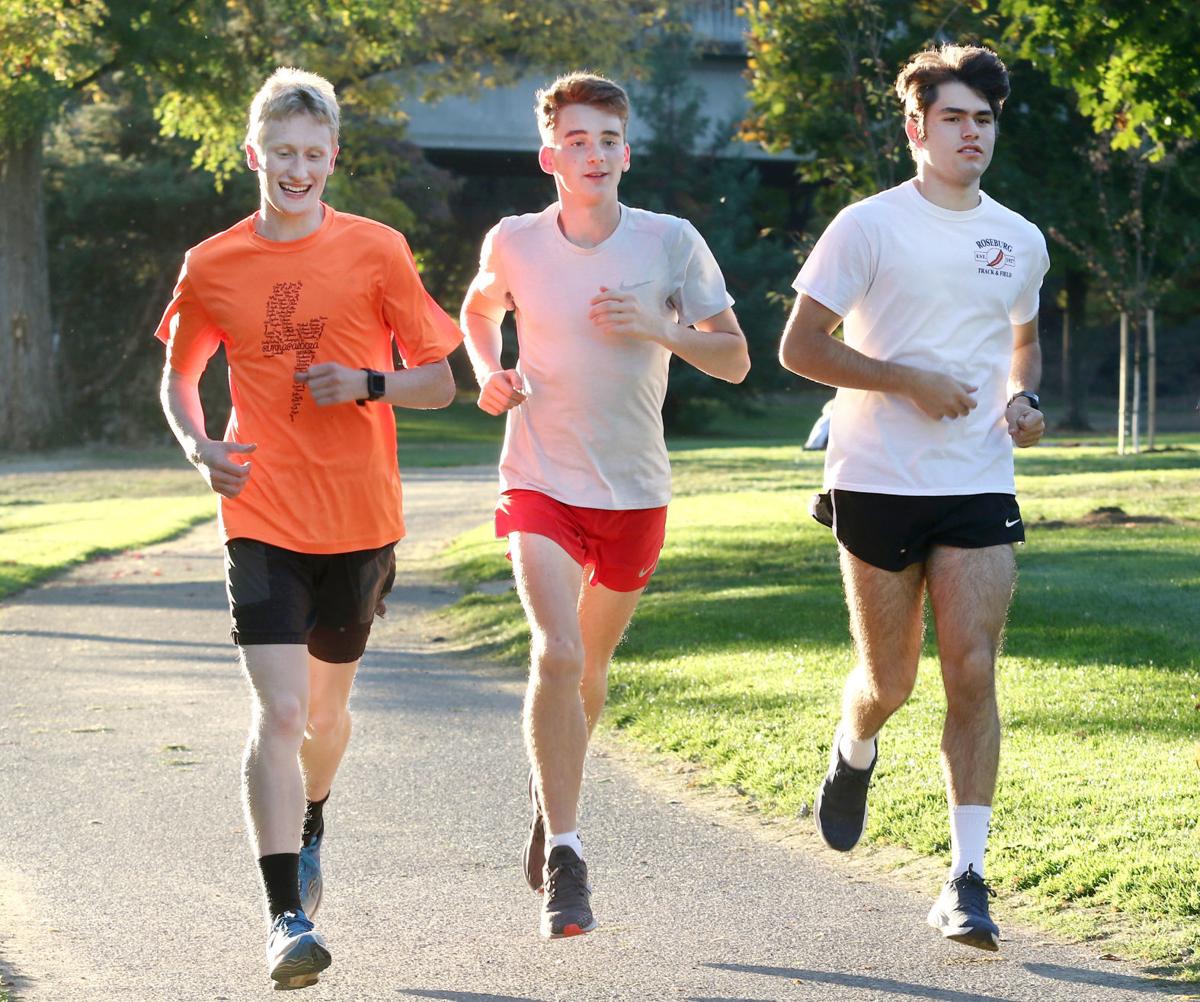 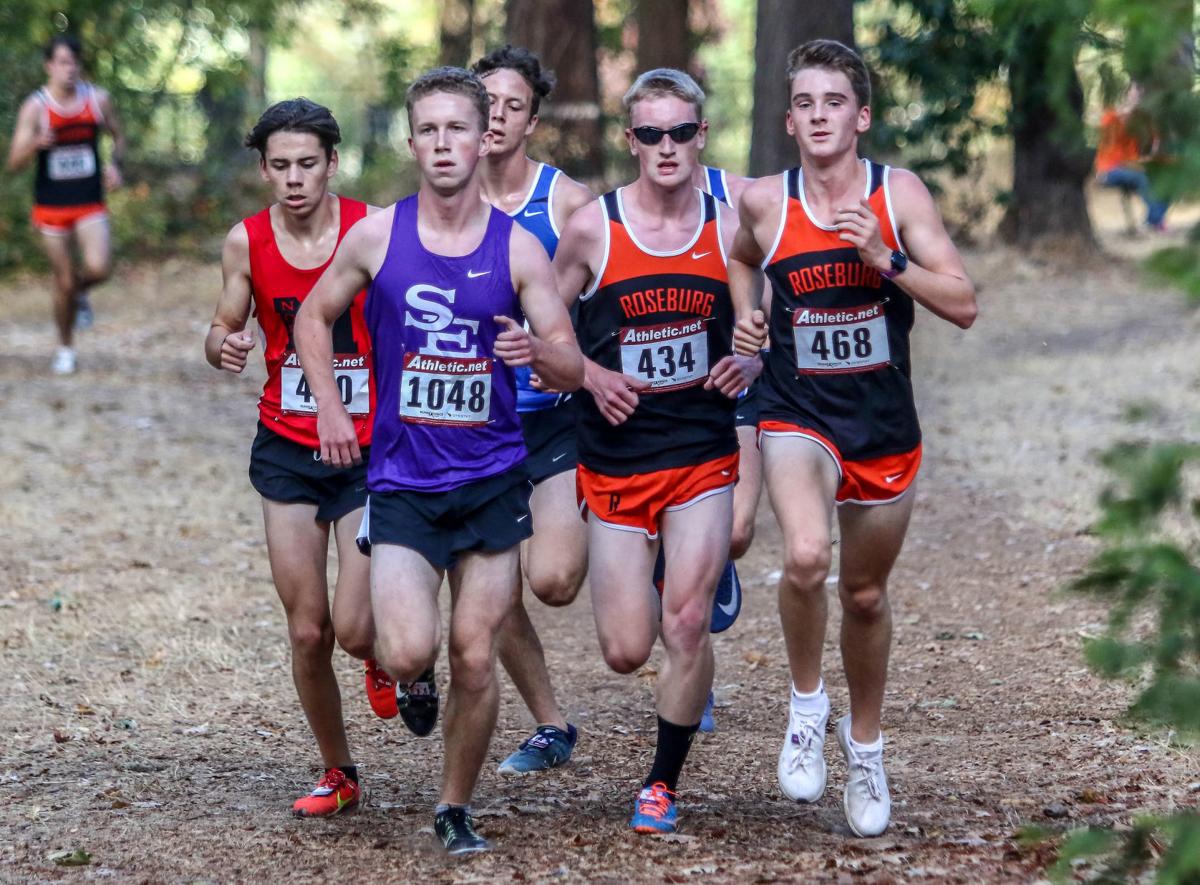 Roseburg’s Zachary Traul, right, was the top runners for the RHS boys with a sixth-place overall finish in 16 minutes, 45.5 seconds during the Southwest Conference Pre-District cross country meet earlier this season at Stewart Park. Hunter Agsten, second from right, came in ninth with a time of 16:51.3. 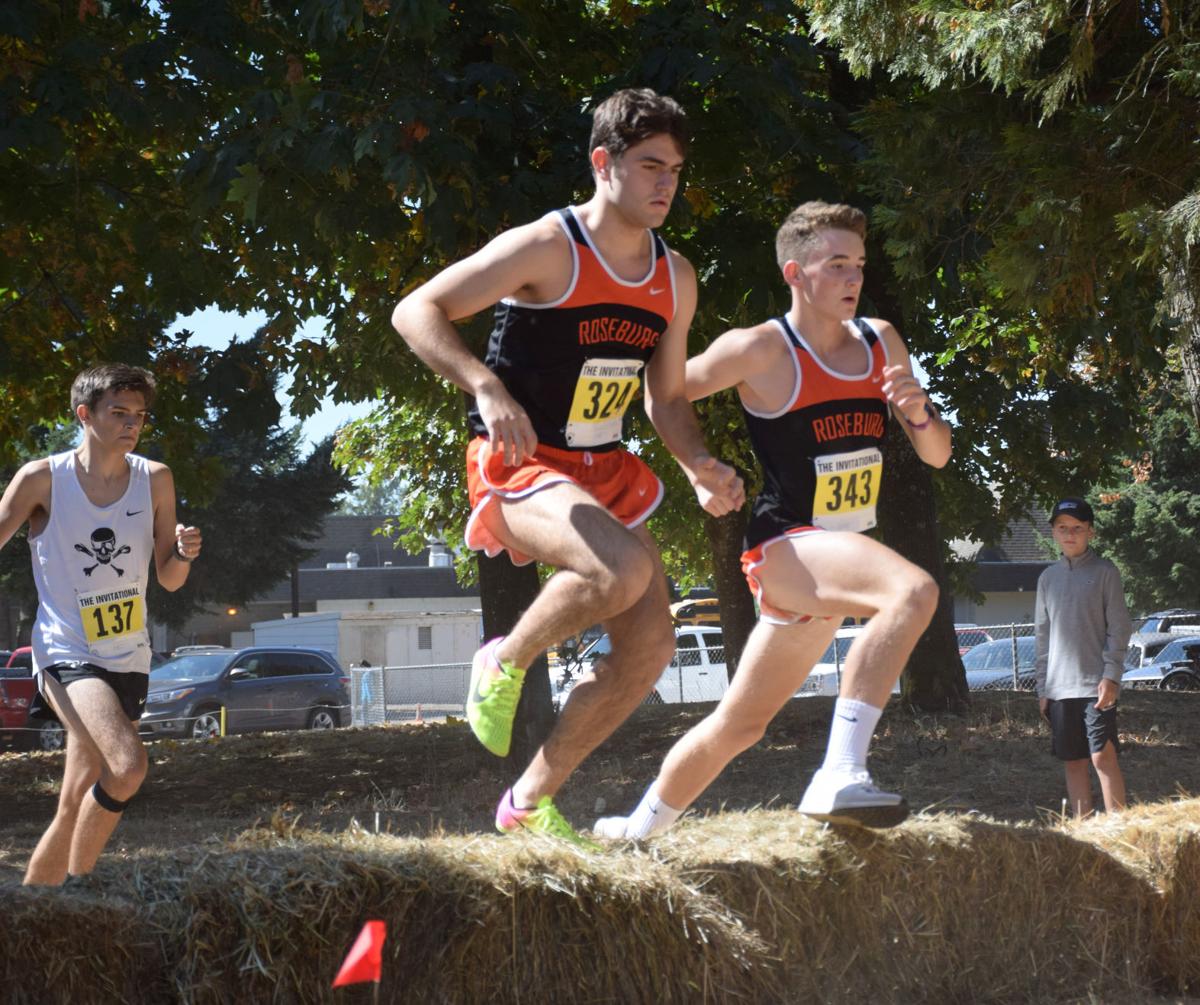 Roseburg’s Elijah Hansen and Zachary Traul clear a bale of hay at the Marist Invitational earlier this season in Eugene. 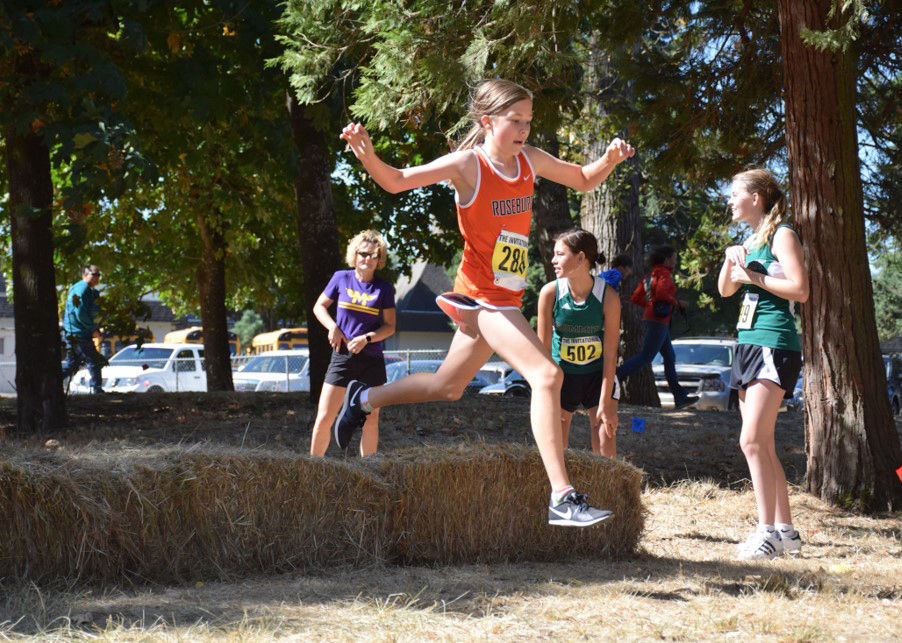 Eliza Eckman jumps over a hay bale at the Marist Invitational earlier this season in Eugene. Eckman finished 18th in the girls’ race.

Roseburg’s Zachary Traul, right, was the top runners for the RHS boys with a sixth-place overall finish in 16 minutes, 45.5 seconds during the Southwest Conference Pre-District cross country meet earlier this season at Stewart Park. Hunter Agsten, second from right, came in ninth with a time of 16:51.3.

Roseburg’s Elijah Hansen and Zachary Traul clear a bale of hay at the Marist Invitational earlier this season in Eugene.

Eliza Eckman jumps over a hay bale at the Marist Invitational earlier this season in Eugene. Eckman finished 18th in the girls’ race.

They have been the top three runners for Roseburg High School’s boys cross country team for the past two years.

“It’s less about being the top runners and more about being leaders,” Hansen said. “(It’s about) setting a positive example for future generations.”

Hansen said people refer to them as ‘the three amigos.’

“All three are very social but in their own unique way,” RHS coach Nathan Eckman said. “Hunter is a creative writer story teller. Eli expresses his creativity though his music. Zach is always excited about learning new things.”

Hansen put it a little differently. He described himself as the stoic one, Agsten as excited and Traul as the little brother.

Eckman said, “(They’re) such positive role models with such unique personalities. What links them is their loyalty to the team, their passion for life and their love of their families.”

Family atmosphere is something Eckman brings to his cross country teams as well.

“It’s very playful, but we all have a good bond and everybody is friends,” Traul said. “You can talk to anybody on the team and have a great conversation with them.”

Traul joined the team last year when he was a sophomore. Agsten and Hansen are both seniors this year and started running cross country in middle school.

“It’s been a good season, but it’s going to be hard to let go,” Hansen said.

When asked what they’d miss most about the team, Agsten replied, “long runs with the guys and Stanford,” referring to the invitational in California. Hansen said he’d miss the love line — where members of the team stand in a line while massaging the shoulders of the person in front of them.

“It helps with the bonding experience,” Agsten said, while Hansen added, “and your shoulders always feel great.”

The love lines will likely continue even after their departure, but Traul will be without his two running mates for practice or competition.

“I’ve liked running with them,” Traul said. “They’ve really helped me to get where I am, but next year is going to be interesting. I’m going to have to find other people to run with, so I’m definitely going to have to get some of the freshmen and sophomores and get them into gear over the winter and summer. I’m looking forward to that sort of mentoring another group.”

It’s the same mentoring he received when he joined the team in 2017.

“He’s an important asset and a great friend,” Hansen said. “He’s a super hard worker. We’re very proud of him.”

Despite only having been on the team for a year, Traul has taken the top spot away from Agsten this year. Traul finished ahead of Agsten in the last six meets and ran his personal best 16:31.2.

Agsten is also the only one who has qualified for the Class 6A state cross country championships before.

“It’d be nice (to return to state), but it’s going to be tougher this year, because instead of the top 10 only the top seven go,” Agsten said. “So they took away three spots and the competition got a lot faster.”

Although Agsten is the only one who has qualified for the state cross country championships before, all three have experience competing on a big stage.

“I would not bet against any of them to qualify for state,” Eckman said. “If they are close with a mile to go they will make it interesting.”

The top three teams at district automatically qualify for the state meet Nov. 3 at Lane Community College in Eugene.

“I don’t know (if we’ll qualify) as a team, but I think as individuals we’ve definitely got a shot,” Traul said. “I think it’s going to be very hard, but there’s a solid possibility we can qualify.”

Agsten said the key at the district meet will be to run a smart race, which will be made easier by the fact it’s at Stewart Park — Roseburg’s home course.

“Most of our workouts we’ve just been running around the course, and we know every little bump,” Traul said.

Agsten added, “Plus, the course this year is better than it has been any of the other years.”

Sheldon and South Eugene are the favorites for the top two spots, with the rest of the conference battling for third.

“We’re excited about hosting district at beautiful Stewart Park,” Eckman said. “Our athletes love to compete and are excited about racing at home one final time next Wednesday. I have so much faith in this group as they always give it their best effort in practice, in the classroom and when they compete. The trick is to focus in on remaining calm until it is time to battle over the last mile.”

Roseburg’s other runners at the SWC district meet will be Steen Olson, Finn Flugel, Nicholas Looper and John Sojo.

Eliza Eckman has been steadily improving all year long, with her PR of 19:00.9 at the Oct. 13 Warner Pacific Classic.

“Eliza is right in the thick of it and she loves to, and is looking forward to, competing,” coach Eckman said.

RHS seniors Isabell Webber, Eden Childers and Bethany Kalebaugh round out the top runners for the Roseburg girls. Miriam Childers and Nina Willhoft earned their spots on the district team during the Umpqua Last Chance Meet last Wednesday.

“Our girls love to race and their workouts this past week have been phenomenal,” coach Eckman said. “Our runners have trained almost daily and completed some incredibly difficult workouts on our home course. I believe this gives them a great advantage.”