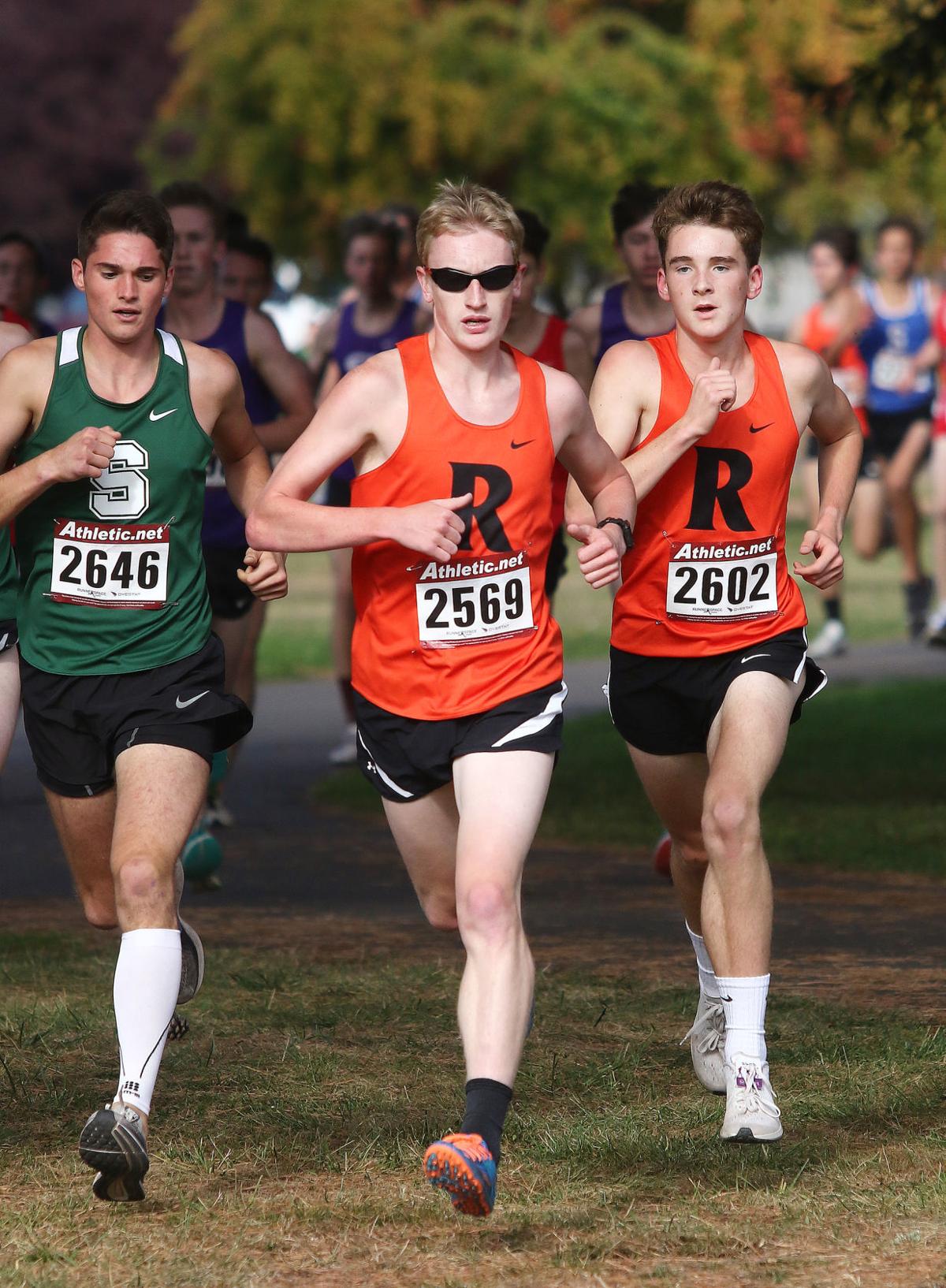 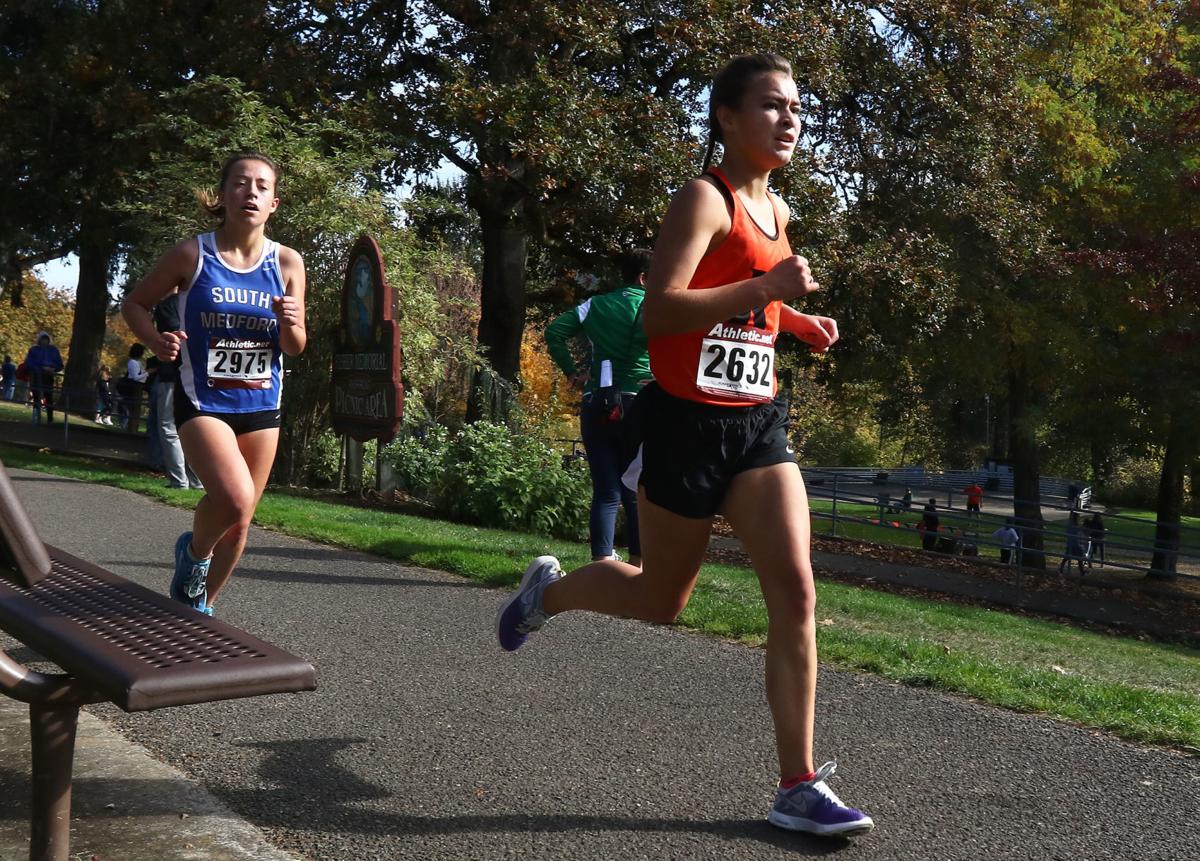 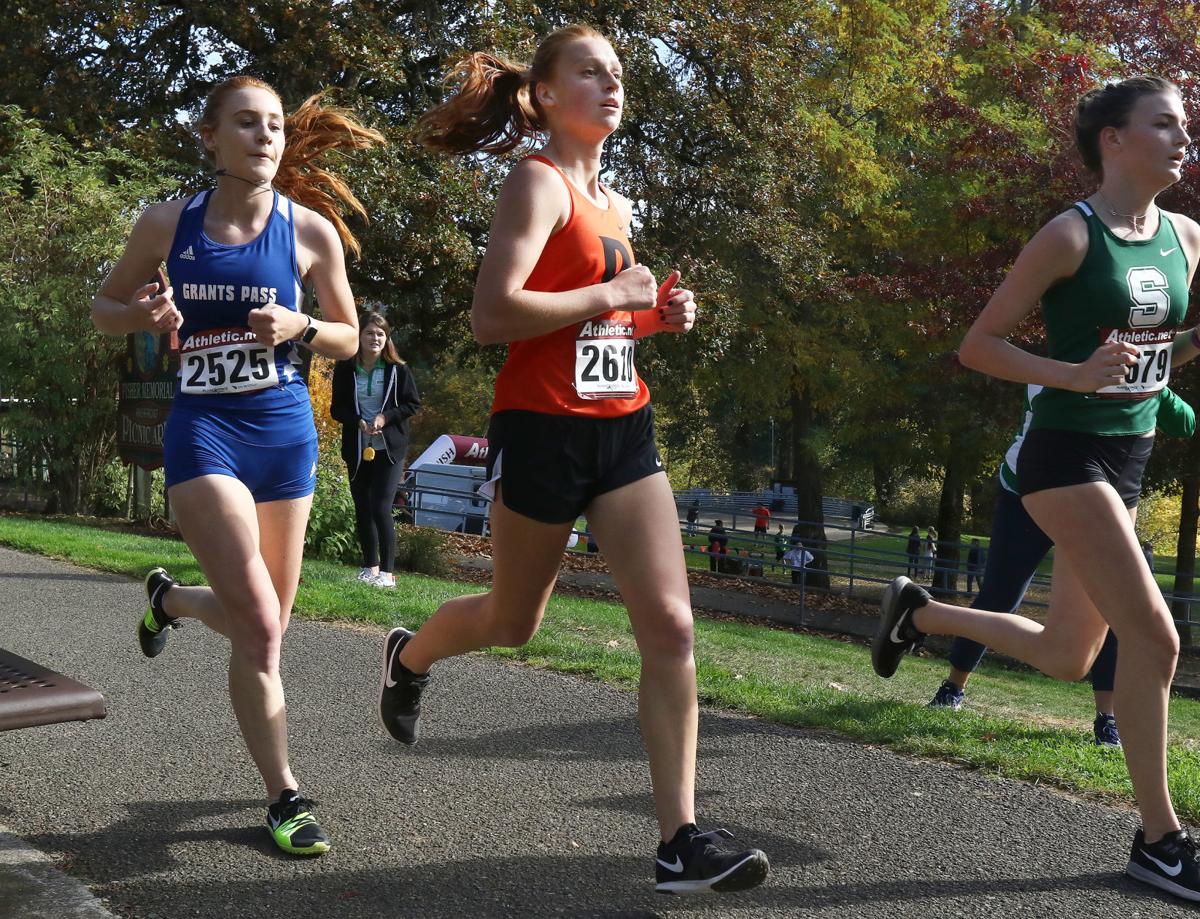 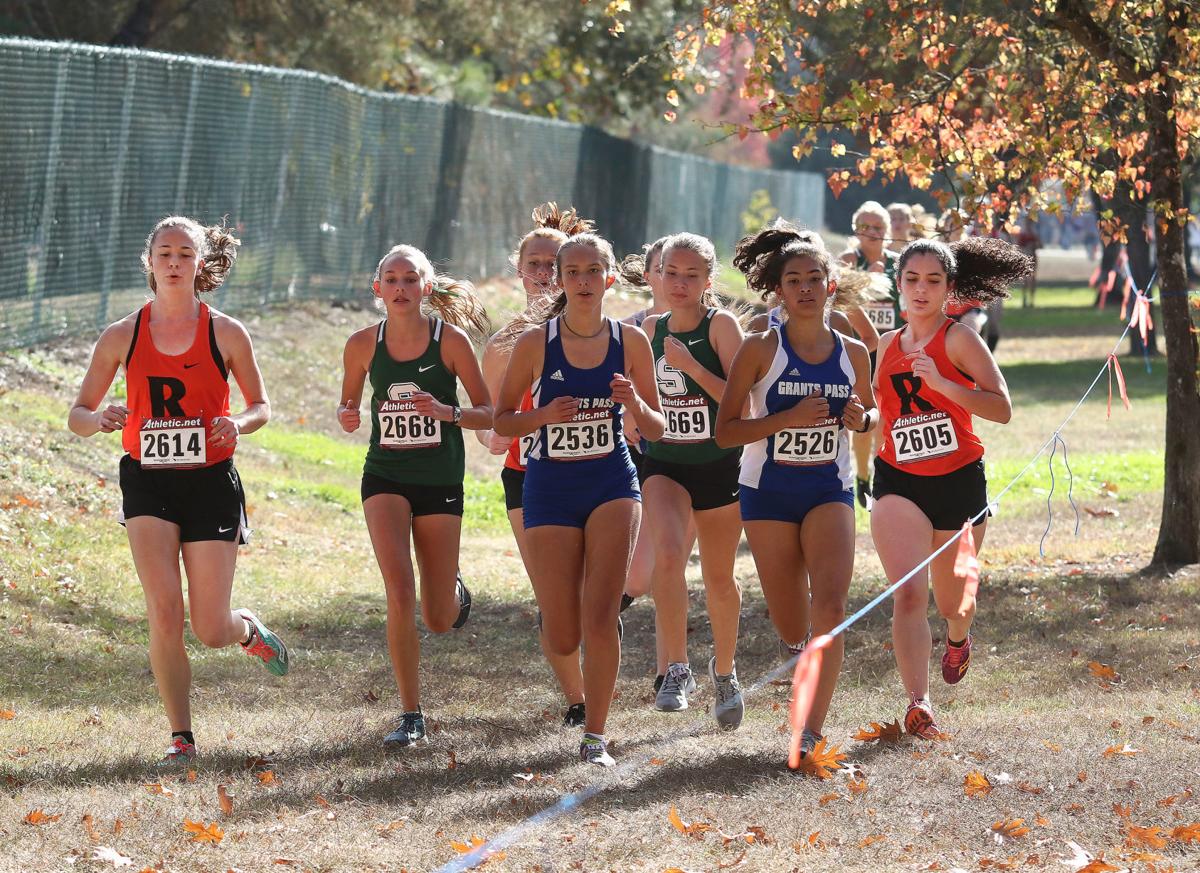 Roseburg seniors Bethany Kalebaugh (2614) and Eden Childers (2605) run in a pack during the Southwest Conference girls cross country meet at Stewart Park in Roseburg on Wednesday. 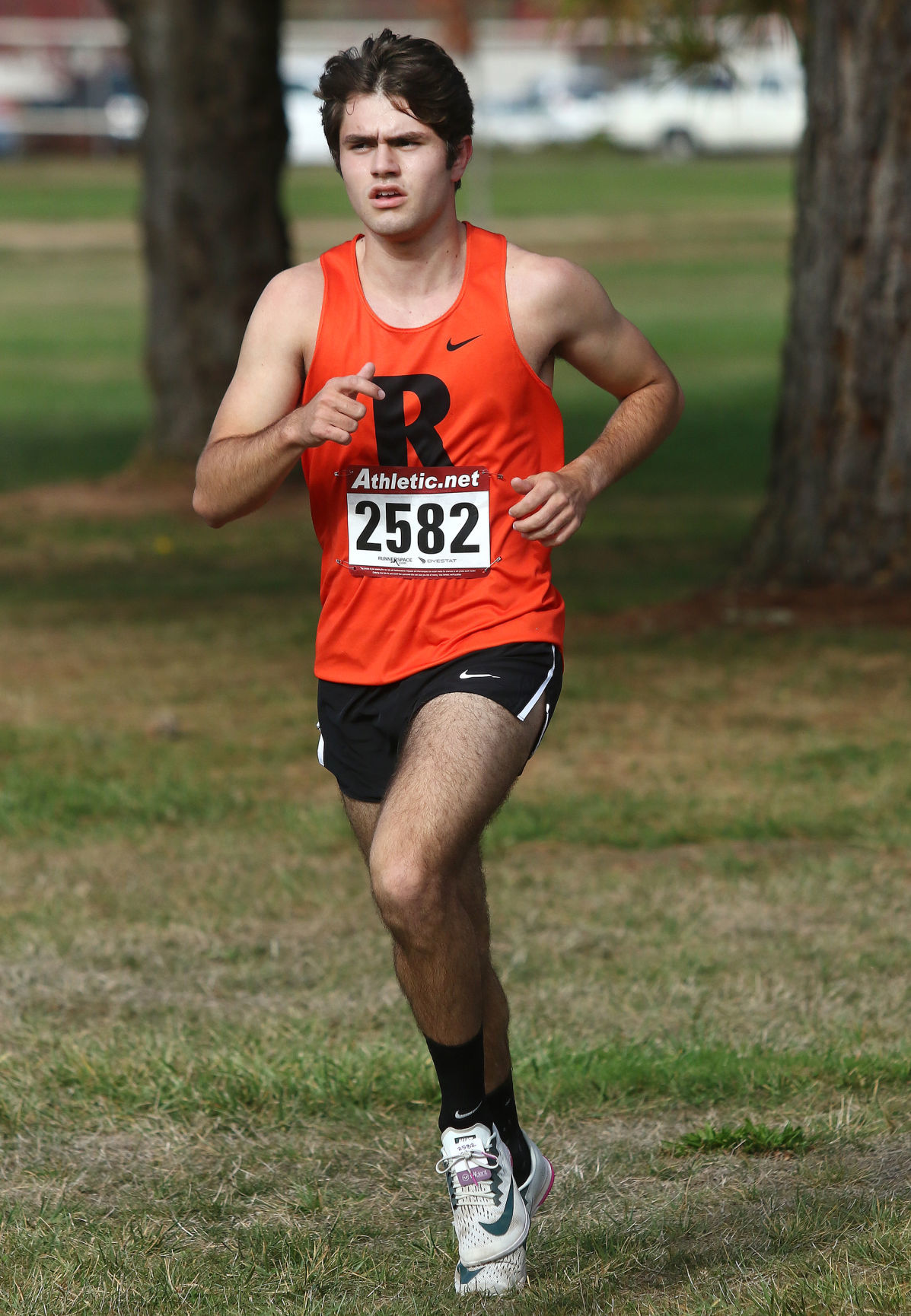 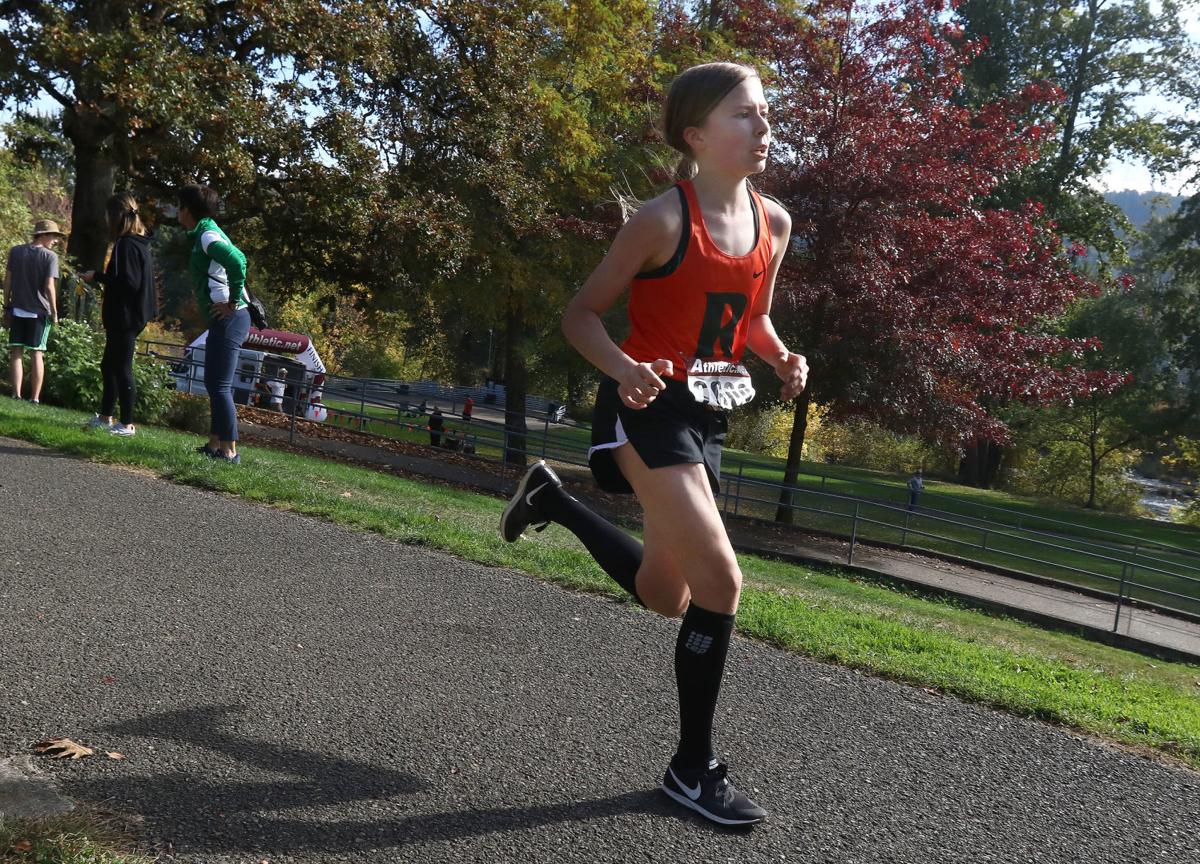 Roseburg freshman Eliza Eckman competes in the Southwest Conference girls cross country meet at Stewart Park in Roseburg on Oct. 24. Eckman is the only Douglas County runner to qualify for the state cross country meet Saturday at Lane Community College in Eugene.

Roseburg seniors Bethany Kalebaugh (2614) and Eden Childers (2605) run in a pack during the Southwest Conference girls cross country meet at Stewart Park in Roseburg on Wednesday.

Roseburg freshman Eliza Eckman competes in the Southwest Conference girls cross country meet at Stewart Park in Roseburg on Oct. 24. Eckman is the only Douglas County runner to qualify for the state cross country meet Saturday at Lane Community College in Eugene.

Eliza Eckman will be the lone Roseburg representative for the cross country teams after a seventh-place finish at the Southwest Conference district meet Wednesday at Stewart Park in Roseburg.

“Eliza was 14th at the mile and did some great work during the second mile to move into a position to qualify,” Roseburg coach Nathan Eckman said. “I love that kid and can’t wait to watch her represent her school at state.”

“I was kinda surprised I broke 19:30 this year,” Eliza Eckman said after the race. “I really liked (running the district meet at Stewart Park).”

She is the first freshman for RHS to qualify individually for state in more than a decade. Bryanna Oelrich was the last one in 2006, Kate Wilton qualified as a freshman in 2004 and Katherine O’Neil did so in 2002.

The top three teams — South Eugene, South Medford and Sheldon — automatically qualified for the Class 6A Championships, which will be held Nov. 3 at Lane Community College in Eugene. Runners who finished in the top seven and were not members of those teams qualified individually.

Eliza Eckman was the only girl to finish in the top seven who’s not a member of a top three team at the district meet.

When asked what her expectations were for the state meet, Eliza Eckman replied, “I want to get a PR.”

“I feel really proud of our community, we had lots of support today. I’m really proud of my teammates, we all pushed it really hard,” Webber said. “I know each of us got really close, if not, PR’d. It was really exciting and I wish I had another season of it.”

“Our girls battled today ... our fifth runner beat every other team’s fifth runner but South Eugene’s fifth runner,” coach Eckman said. “We were so close to qualifying as a team. We won many head to head battles. I told our girls that they have put Roseburg girls cross country on the map this season. This girls team ends the season ranked 20th in the state.”

In the boys’ race, Daniel Beckstead of Grants Pass ran to a seemingly easy victory in 15:24.70.

“I woke up two nights ago and thought, one year ago I won this thing and I had the fastest time, but I didn’t know I was going to do it. This year I’m going to win it,” Beckstead said. “Last year I was chasing people and this year everybody had to chase me.”

About a mile and a half into the race, Beckstead was stung by a bee. “I thought it was going to rain. I expected the worst, so I took this as a blessing,” he said.

Beckstead hopes to finish in the top five at state. He finished 97th his freshman year, 67th his sophomore year and 19th his junior year.

South Eugene, South Medford and Sheldon were the top three teams for the boys and advanced to state. Beckstead and North Medford’s Jacob Allmaras finished in the top seven and qualified as individuals.

Zachary Traul was the first Roseburg runner for most of the race, but in the final stretch teammate Hunter Agsten sprinted to catch up.

Agsten was credited with an 11th place finish, Traul took 12th. Both got a chipped time of 16:24.60, a season best for Agsten and a PR for Traul.

“I was hoping to get a little more in front of him, but I’m happy that we tied. At least now I can end my season saying we’re equals this year,” Agsten said. “I’m happy with my race. We went out a little fast and then I kind of died a little bit in the middle section. I got here (about a mile from the finish) and didn’t realize how close I was to Zach, I think he died a little, too. So I gave it every last drop of energy I had.”

With a mile and a half to go — just as the bike path enters the oak trees — Traul and Agsten tried to pull closer to the seventh and eighth spots. They needed to at least finish seventh to qualify for state.

“It was a really fast race,” Traul said. “I went for it, I was up there with the top seven for a while and in the second mile they just took off. I tried, I got as close as I possibly could.

“It was a fast start, but that’s how fast I would have to go to make it to state so it was either all or nothing. There was no go out easy and pass the kid, they were way too far ahead, I had to be within striking range at some point on the course. That’s just what you have to do to get into state in our district.”

Nathan Eckman said, “I love the way they competed today and went for it even when the odds of qualifying were stacked against them. Sure, they came up a little short ... but they went for it and just about pulled it off. Those moments of digging in and finding the will to compete is what cross country is all about.”

The Roseburg boys finished fifth in the team standings.

“The boys team was seeded sixth going into the meet, but with five PRs, one season best, and another solid race by Eli the boys beat Grants Pass,” coach Eckman said.