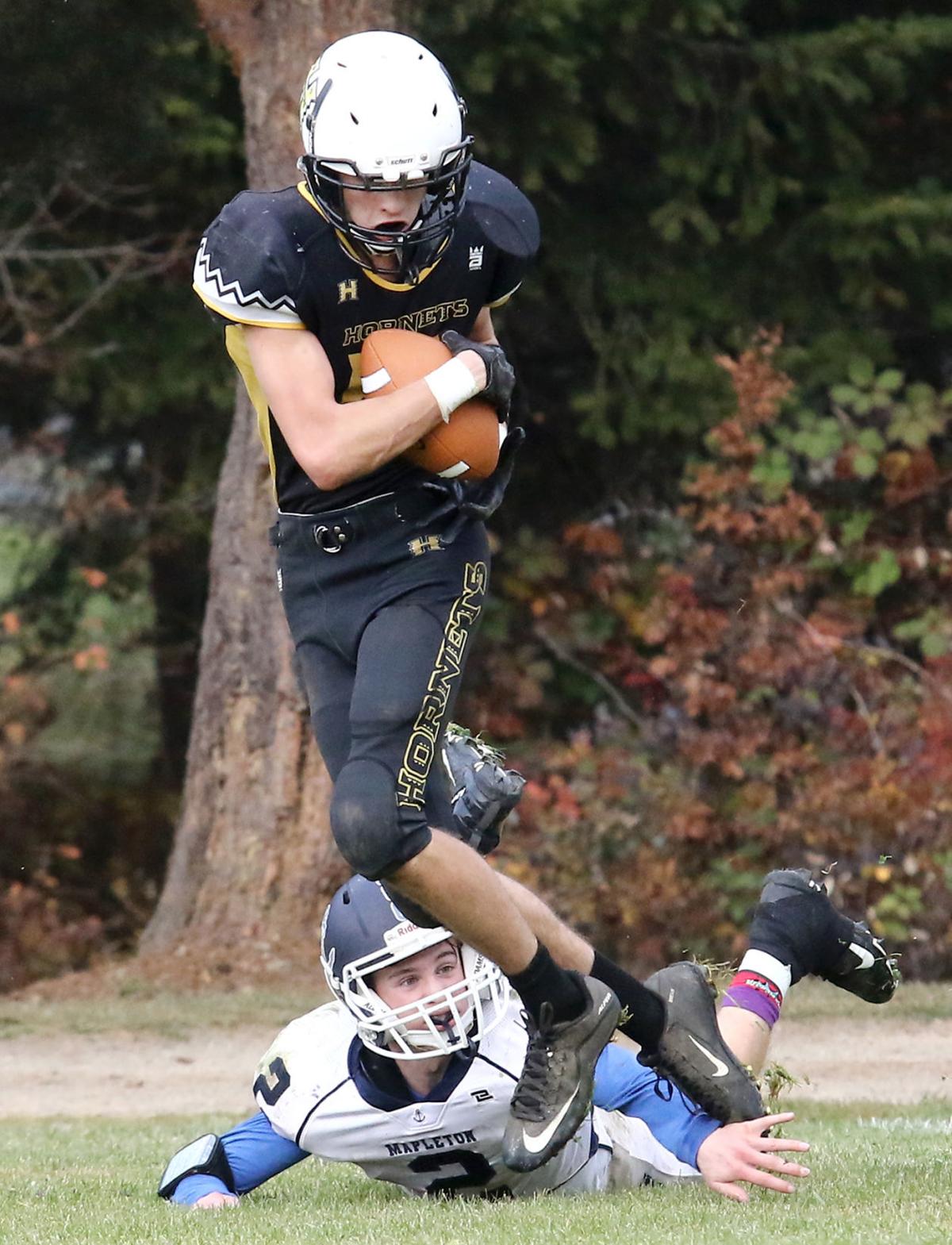 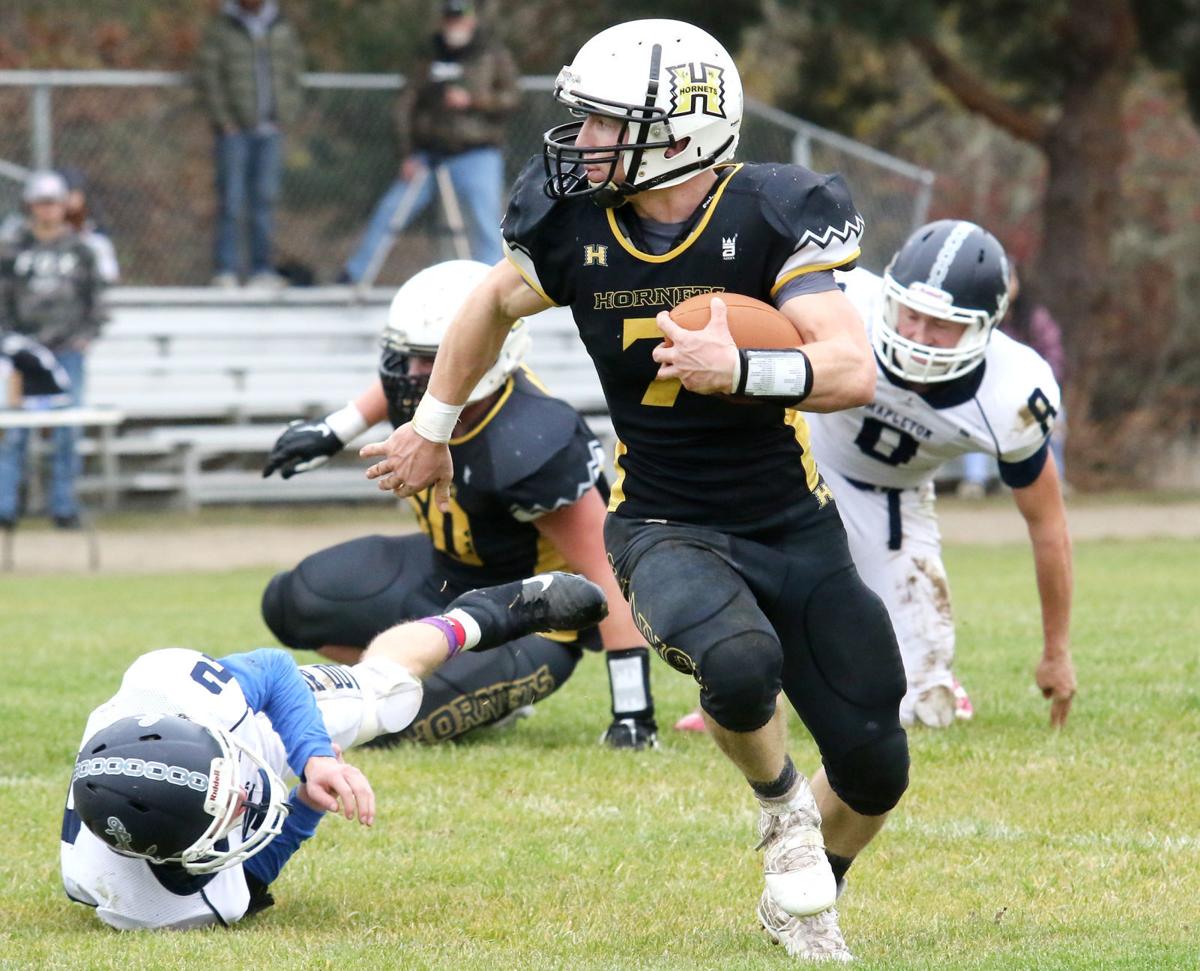 Camas Valley’s Jared Hunt runs for one of his five touchdowns against Mapleton Saturday in Camas Valley. The Hornets won the playoff game, 86-50. 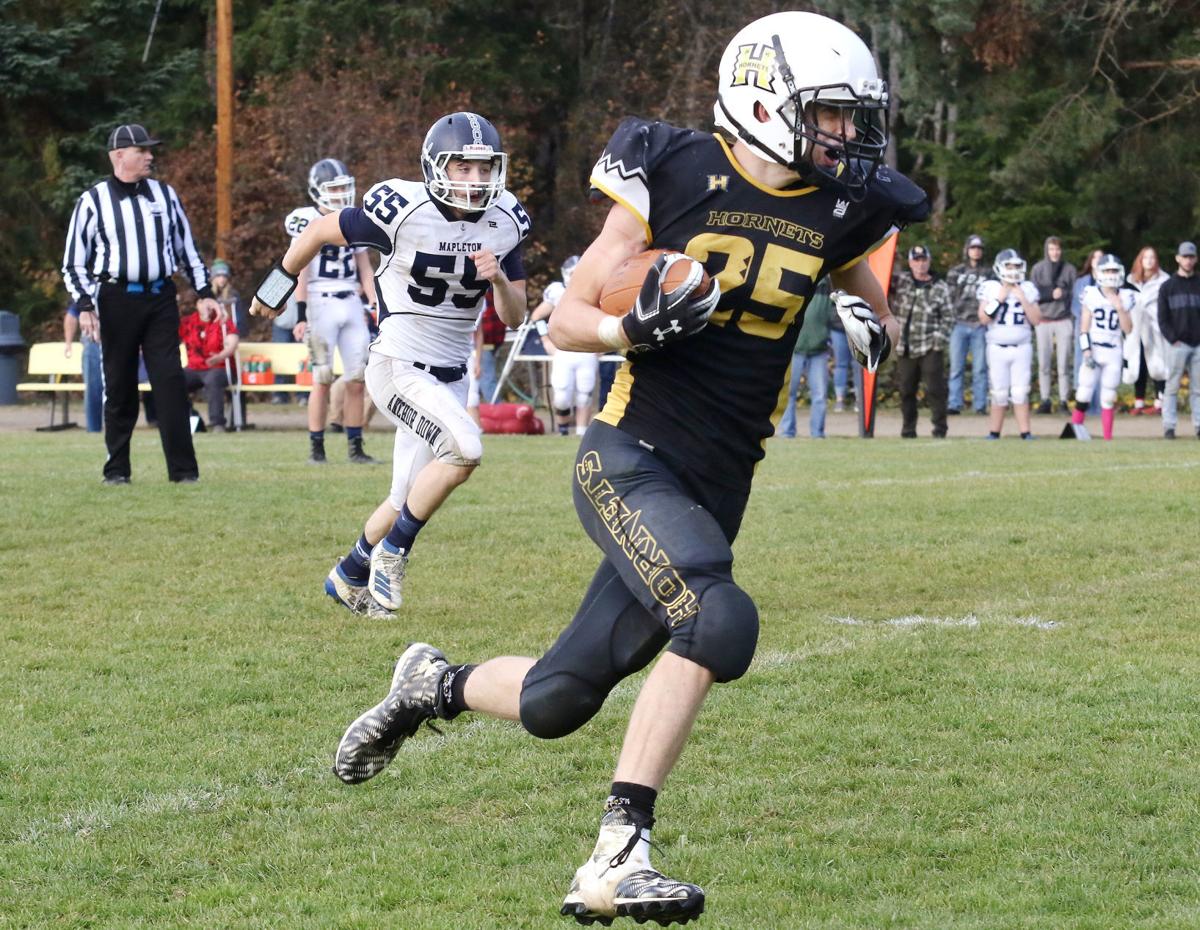 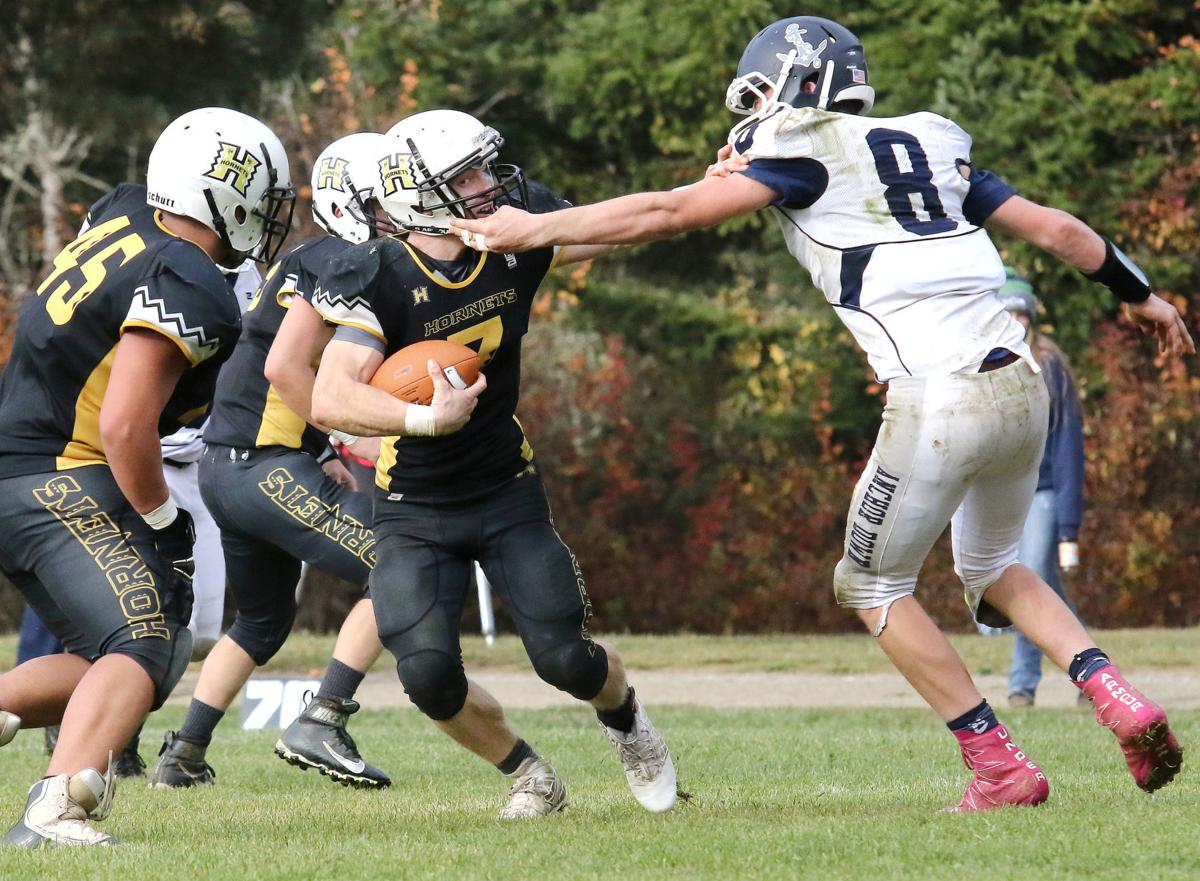 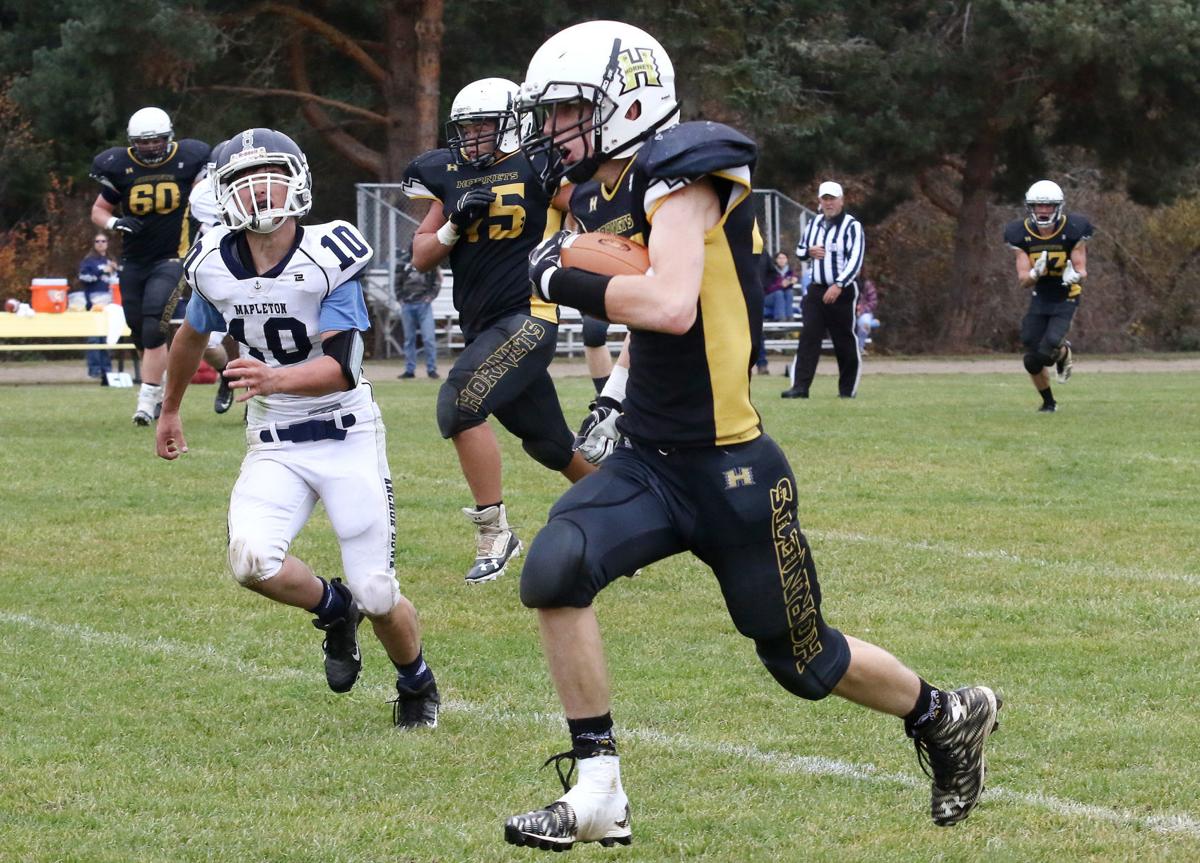 Camas Valley end Nathan O’Connor gains yards for the Hornets during first half play against Mapleton Saturday in Camas Valley. 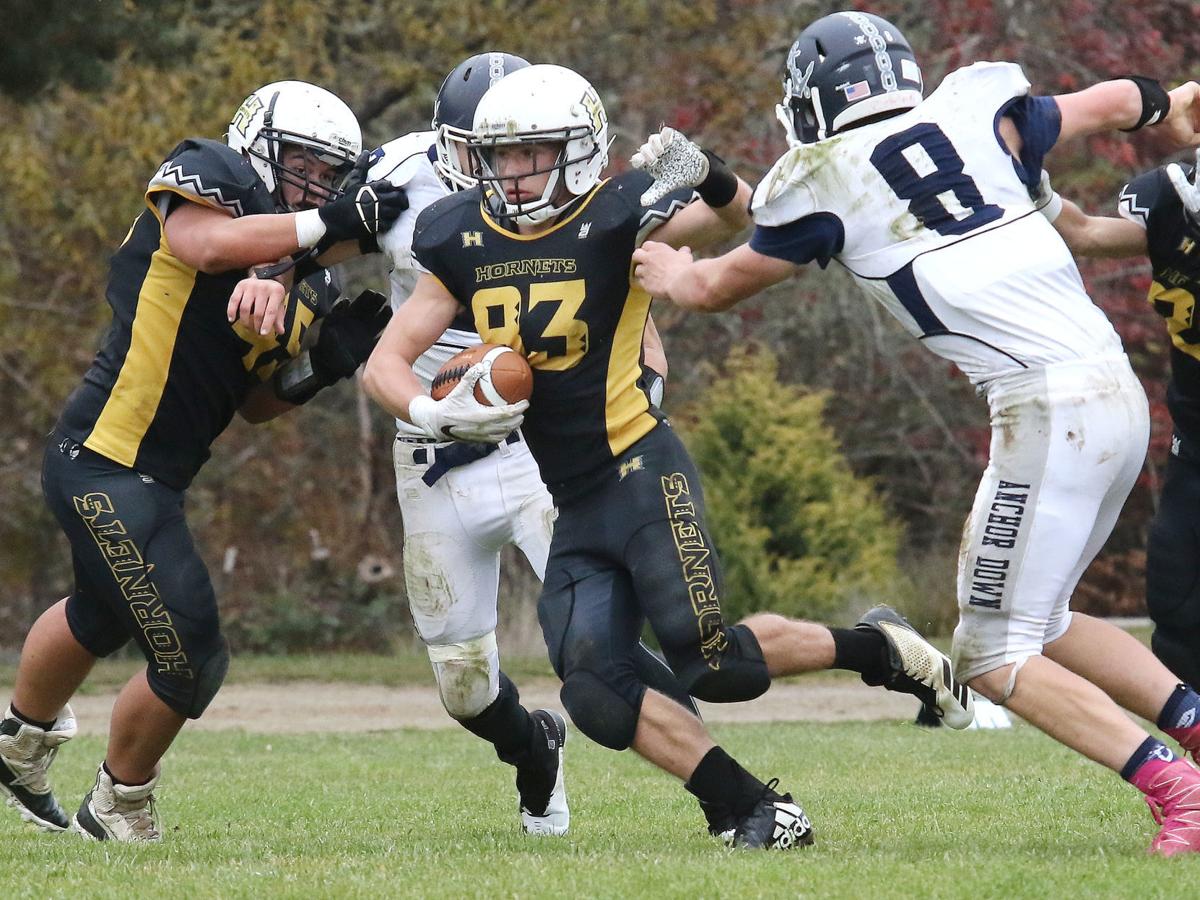 Camas Valley running back River Wolfe carries the ball against the Mapleton defense during first half play Saturday in Camas Valley. Wolfe ran for 212 yards and four TDs. 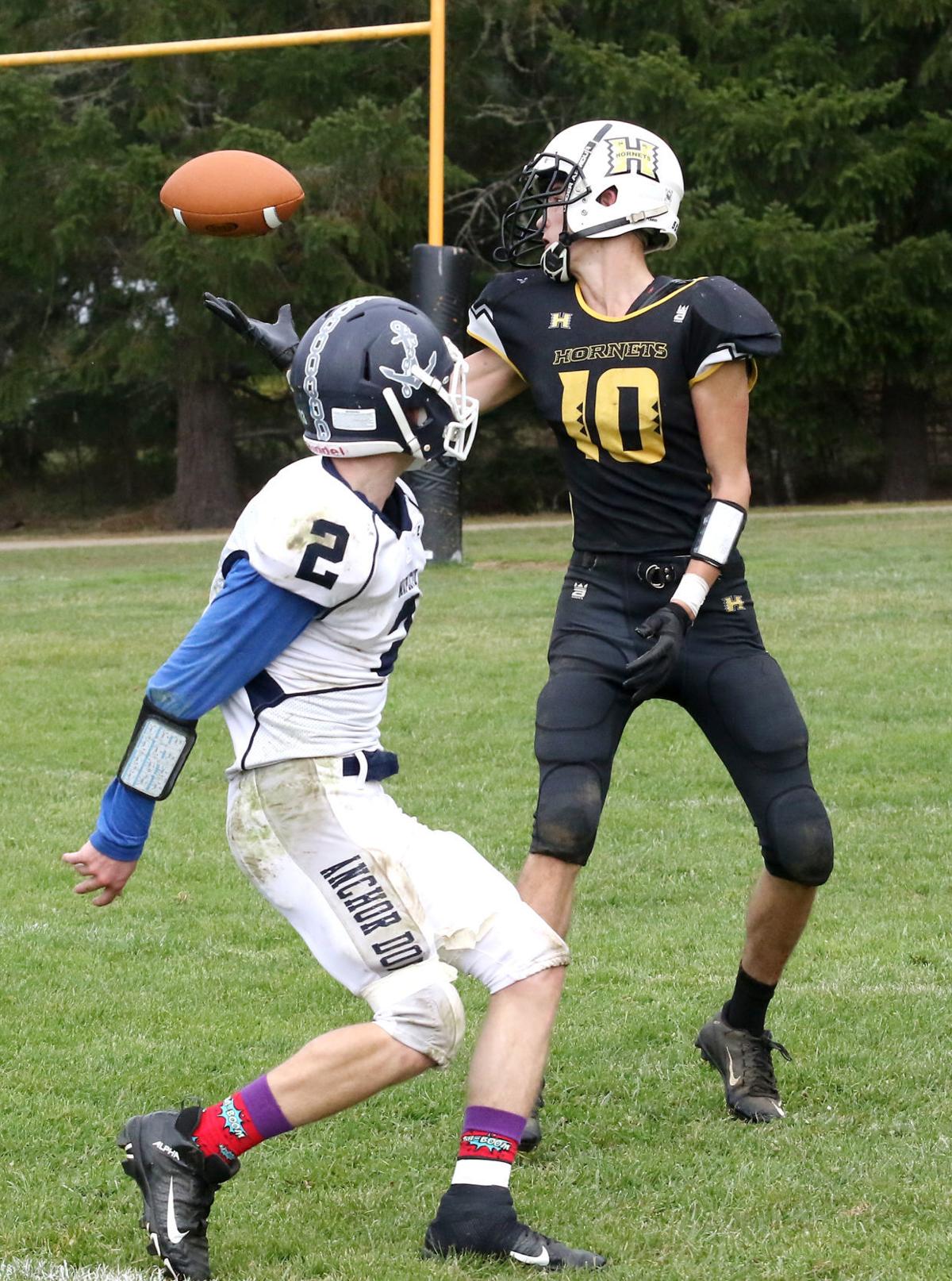 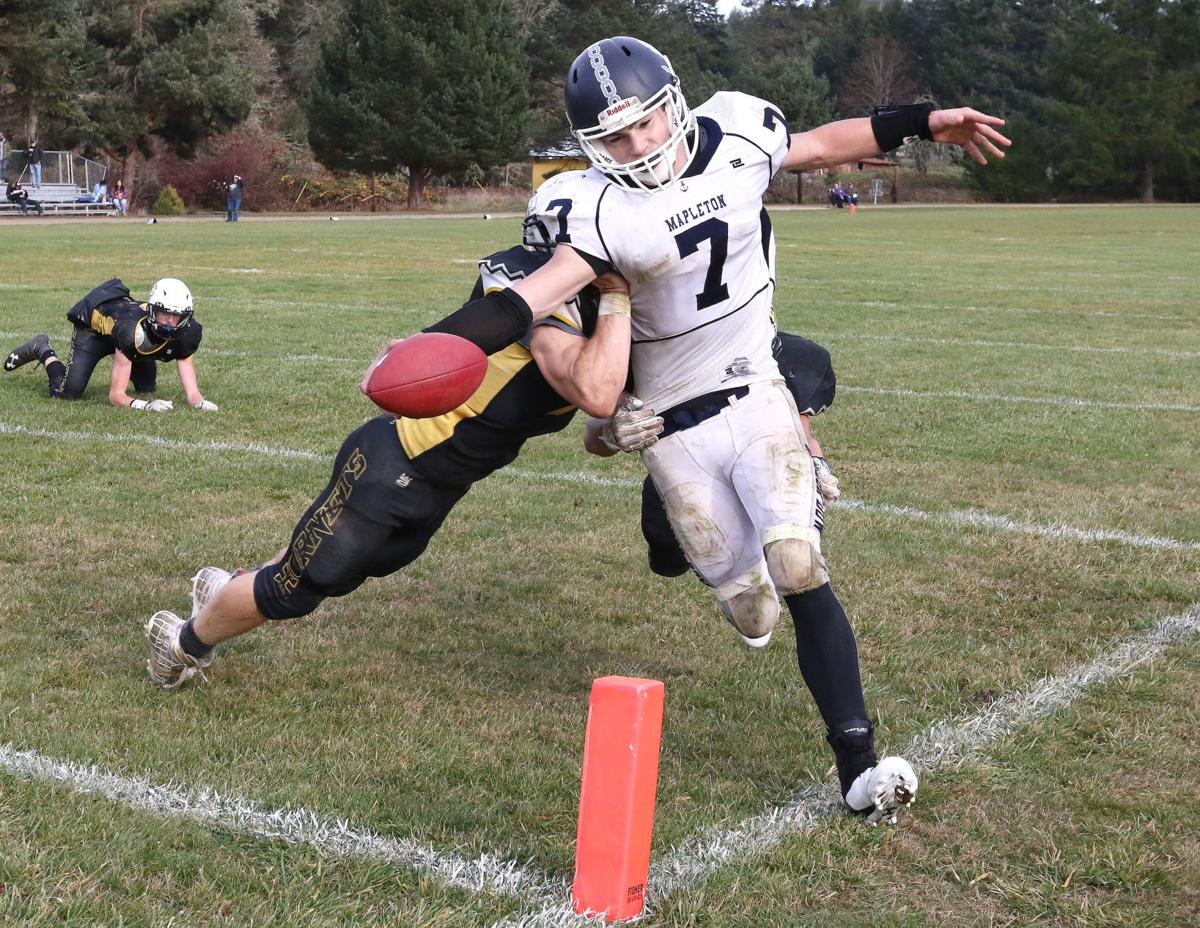 Camas Valley’s Jared Hunt runs for one of his five touchdowns against Mapleton Saturday in Camas Valley. The Hornets won the playoff game, 86-50.

Camas Valley end Nathan O’Connor gains yards for the Hornets during first half play against Mapleton Saturday in Camas Valley.

Camas Valley running back River Wolfe carries the ball against the Mapleton defense during first half play Saturday in Camas Valley. Wolfe ran for 212 yards and four TDs.

CAMAS VALLEY — It wasn’t a Hornet-like performance in the first half for the Camas Valley football team at home in its Class 1A eight-man first-round playoff game with Mapleton on Saturday afternoon.

Some mental mistakes and penalties by the Hornets — and the play of Mapleton quarterback JJ Neece — kept the contest close through 24 minutes, with Camas Valley leading 44-32.

But the fourth-seeded Hornets used a key defensive stand and scored six touchdowns in the second half to pull away from the No. 13 Sailors, 86-50.

Camas Valley (8-0) advanced to a quarterfinal matchup next Saturday at home against No. 12 Powder Valley (7-3), which eliminated No. 5 Lowell 68-62 on Friday night.

C.V. and Mapleton (6-4) provided plenty of entertainment from an offensive standpoint. The game, which lasted three hours and 17 minutes, produced 1,212 yards of total offense, 136 points and 56 first downs.

The Hornets’ point total was their highest since a 94-12 playoff rout of Cove at home in 2012.

Camas Valley hadn’t been tested during the regular season, outscoring its opponents 426-70.

“I think it was actually important for us. I was hoping they’d kick us in the mouth at first, to just get that feel of the playoffs,” Camas Valley senior running back/quarterback/linebacker Jared Hunt said. “We didn’t execute as well as we wanted, but executed after halftime. We took it to them and took care of business.”

The Hornets amassed 687 yards total offense, 525 coming on the ground. Hunt carried the ball 15 times for 232 yards and five touchdowns. He had another TD nullified by a penalty. Sophomore River Wolfe added 212 yards rushing on 12 carries, his four TDs coming in the second half.

“I think we needed it (to get pushed),” C.V. coach Keri Ewing said. “We finally did respond, just a little slower than we would’ve liked. Our defense finally calmed down there in the second half and I feel like our offense was rolling.”

“This is the first round of the playoffs and that game was a good test to see how we’ll play throughout the playoffs,” Wolfe, a running back/outside linebacker, said. “I’m definitely a little drained. They’re a good team, fast and speedy. That No. 7 (Neece) is a really good quarterback, and they had some trick plays that messed with our defense in the first half.”

The Hornets entered the contest allowing 10 points a game, but gave up eight touchdowns to the Sailors.

“They threw just about everything at us,” Ewing said. “We don’t want to give up 50. We pride ourselves on defense ... so that’s kind of a tough pill to swallow, but we’ll get back at it next week and get ready for Powder Valley.”

“I was pretty bummed (about giving up 50), but that’s just me because I love defense,” Hunt said. “A win’s a win and we’ll just go on to that next game with the mentality that 50 points isn’t acceptable.”

Justyce Wierichs returned a kickoff 75 yards for a touchdown to pull Mapleton within 38-32 with 51.7 seconds left before halftime.

The Hornets received an extra play with no time left on the clock following an unsportsmanlike penalty on the Sailors. Tristan Casteel caught a 34-yard scoring pass from Collin Ewing to make it a 12-point game at the break.

Mapleton threatened to make it a one-score game late in the third quarter, driving to the C.V. 11. But on a fourth-and-2, Neece was stopped short of the first down. The Hornets proceeded to march 90 yards, with Wolfe capping the possession with an 11-yard run with 2:02 remaining. That put C.V. up 58-38.

Casteel was the Hornets’ top receiver with five catches for 83 yards. Nathan O’Connor made two receptions for 79 yards, including a 42-yarder from Hunt in the second quarter.

Wierichs finished with 128 yards rushing and caught three balls for 142 yards for the Sailors.

With sophomore Jared Standley out (knee), Hunt and Collin Ewing shared the quarterback duties. They were a combined 7-for-17 passing for 162 yards and two TDs.

Standley is expected back next week.

“I think they both did a great job,” Keri Ewing said. “We found a good rhythm with Collin in the second half.”

South Umpqua to ride out the storm rather than play down

Class 5A, 3A state title games on tap Saturday at Roseburg's Finlay Field

South Umpqua to ride out the storm rather than play down

Chamber Corner: Keep Drain in mind when planning your wedding
Graduation rates in Oregon are at all-time high of 80%, Roseburg High School stable at 76.5%