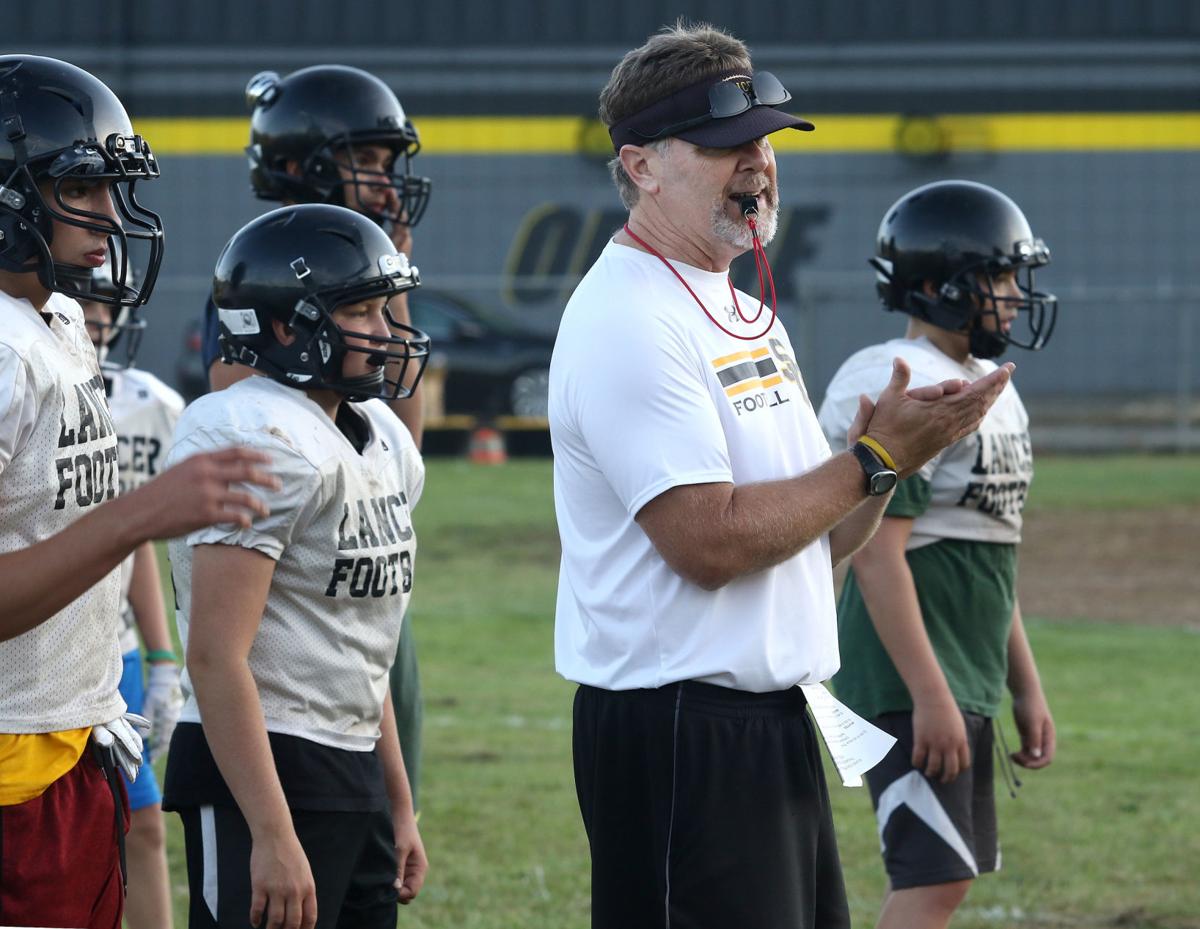 South Umpqua High School head football coach Steve Stebbins says of the uncertainty of the 2020 season happening, ‘Usually I have the summer and all the fall mapped out, but there’s no map right now. Everything’s in pencil and it keeps getting erased.’ 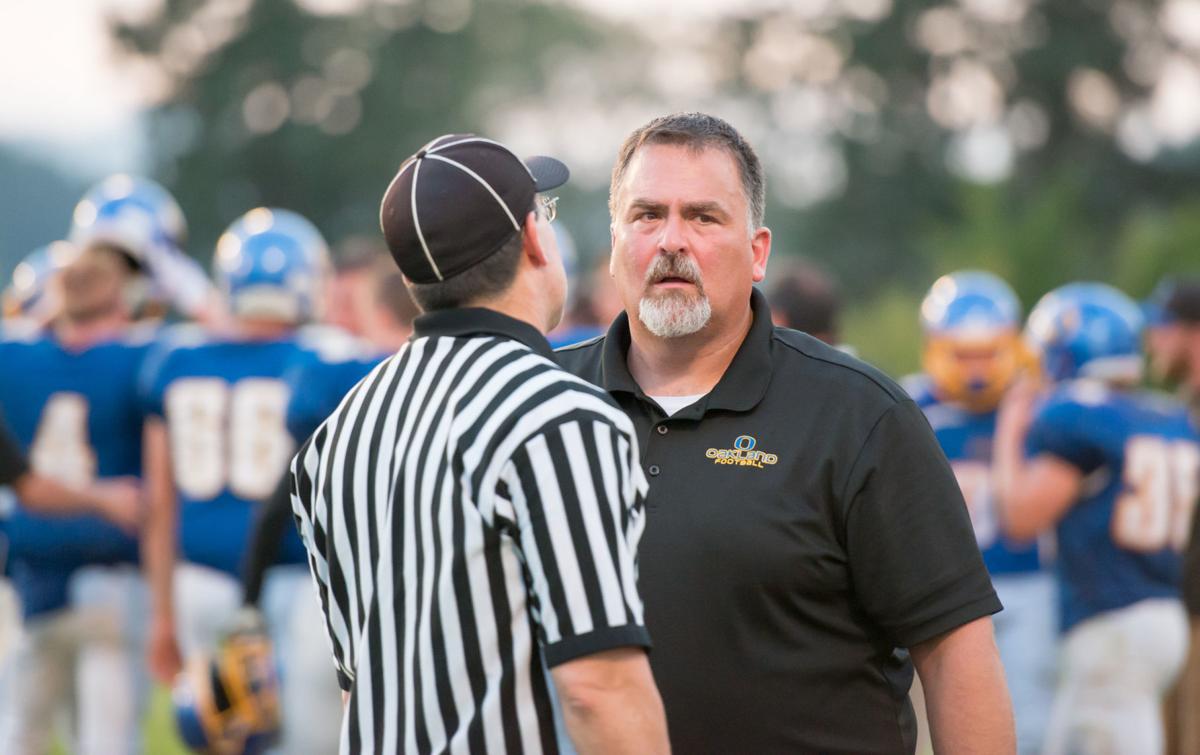 Oakland head football coach Ben Lane isn’t sure if there will be a 2020 season this fall. ‘It’s an emotional roller coaster. One day I feel confident, then dang, I don’t think it’s going to happen.’

South Umpqua High School head football coach Steve Stebbins says of the uncertainty of the 2020 season happening, ‘Usually I have the summer and all the fall mapped out, but there’s no map right now. Everything’s in pencil and it keeps getting erased.’

Oakland head football coach Ben Lane isn’t sure if there will be a 2020 season this fall. ‘It’s an emotional roller coaster. One day I feel confident, then dang, I don’t think it’s going to happen.’

They’ve already dealt with the 2020 high school baseball season getting wiped out during the spring because of the coronavirus pandemic and now are wondering whether football will get played in the fall.

The recent Phase 2 reopening regulations were a positive step for the state, but there’s no guarantees that fall sports — football, volleyball, soccer and cross country — will be contested at all or even start on time.

A serious spike in cases in other counties across Oregon during the past day are a reminder that the coronavirus isn’t going away soon.

Football openers for most county teams are tentatively scheduled for Friday, Sept. 4. Some volleyball and soccer teams open their seasons in late August.

“You’re asking a million dollar question,” said Stebbins, entering his eighth season as the Lancers’ football coach. “I’m optimistic. I hope (the season starts on time), but I just don’t know. I’m taking this week by week ... there are so many scenarios thrown out there.

“It’s been really interesting and challenging. Usually I have the summer and all the fall mapped out (for football), but there’s no map right now. Everything’s in pencil and it keeps getting erased.”

Lane, eager to begin his 11th year in charge of the Oakers’ football program, has mixed feelings on the subject.

“It’s still all up in the air. It changes day to day,” he said. “It’s an emotional roller coaster. One day I feel confident (about having a season), then dang, I don’t think it’s going to happen.

“I think it will start, but don’t think practice will start until school starts. I’m excited to see what they come up with in the next couple of months.”

“There’s a lot still to be determined,” Clark said. “I hope there’s a season. The kids need to be out there and active, they need to get out and compete and be with their teammates. I do think it’s possible, but it could be modified like everything else.

“The OSAA wants to do everything possible to get the kids being active. A couple of weeks ago I was pretty optimistic. Football’s the sport that worries me the most, because there are too many restrictions around it.”

JJ Mast is the athletic director and head football coach at North Douglas.

“I have no idea,” Mast said. “Whether (football) will start on time, I don’t know. It’s frustrating, I understand both sides of the argument. As a contact sport, it gets tricky with football and we’re still waiting to see what things look like.”

“I hope we get to play a full season,” he said. “As long as Phase 2 goes well, I feel we’ll get to play football in August. What’s best for the kids is to get involved and get things going. They need to be together and do something constructive.

“If we have cases come up, we’ll deal with it.”

Bill Shaw is a former head football coach at Elkton and Yoncalla, and looking forward to his first season at Reedsport.

“I’m excited about the season. The kids are excited about a new program and I’ve put together a great coaching staff,” Shaw said. “I’m afraid we won’t know for sure (whether we’re having a season) until June 30.

“It would be really hard to accept if there’s not a football season. Those relationships you build with the kids are a big deal to me. I’m praying ... I’m really hoping by the end of the month we’ll start to see positive changes.”

Matt Bragg is planning to return for his 12th season as Yoncalla’s head football coach.

“I was pretty confident until the Oregon Department of Education announcement (regarding Phase 3),” Bragg said. “I don’t know what’s going to happen. I have 10 seniors coming out and they’re excited for their last year.

“I’m still confident something’s going to work out and we’ll get to play.”

Russell Hobson is the athletic director and boys basketball coach and former football coach at Riddle.

“I’m not in the know,” Hobson said. “It’s a little early to say whether sports are coming back. I think high school sports will follow pro and college football.

“It’s been rough (since March, when some state basketball tournaments were canceled, then spring sports were canceled on April 8). Sports have been such a huge part of American culture — it’s a huge portion of the high school culture. You start taking away sports and it has significant effects.”

“I feel like it will start on time,” he said. “It’s a tough call, but the kids need it. It’s been a long three months. This is something we’ve never been in before and we may not know until before the day we start.”

Everyone agreed having a reduced season would be better than not having one at all. They don’t oppose moving the season back, if necessary. They don’t like the idea of games with no fans or a limited number, but getting to play is paramount.

“The kids are bored. They need to get out and do stuff,” Stebbins said. “These kids need to play to get experience and growth.”

“Everyone wants sports. We could bump everything back a month,” Lane said. “I think it would be smart if they let school go three weeks by itself (before football starts).”

Shaw added, “Being a first-year coach here, I’ll take anything.”