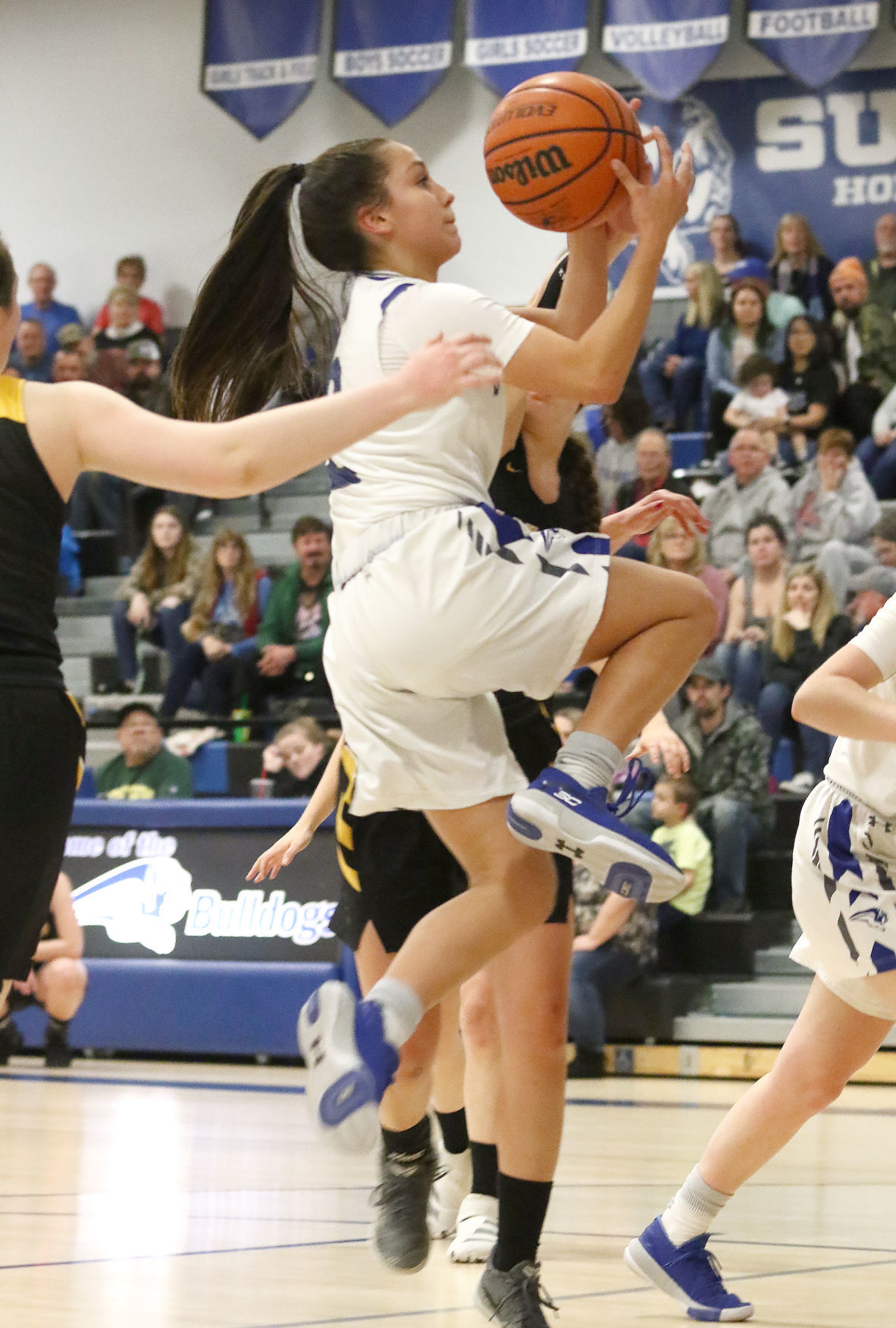 Sutherlin High School guard Micah Wicks drives to the basket for a shot during the first half against South Umpqua on Tuesday. Wicks scored 23 points as the Bulldogs won the Far West League game, 65-43. 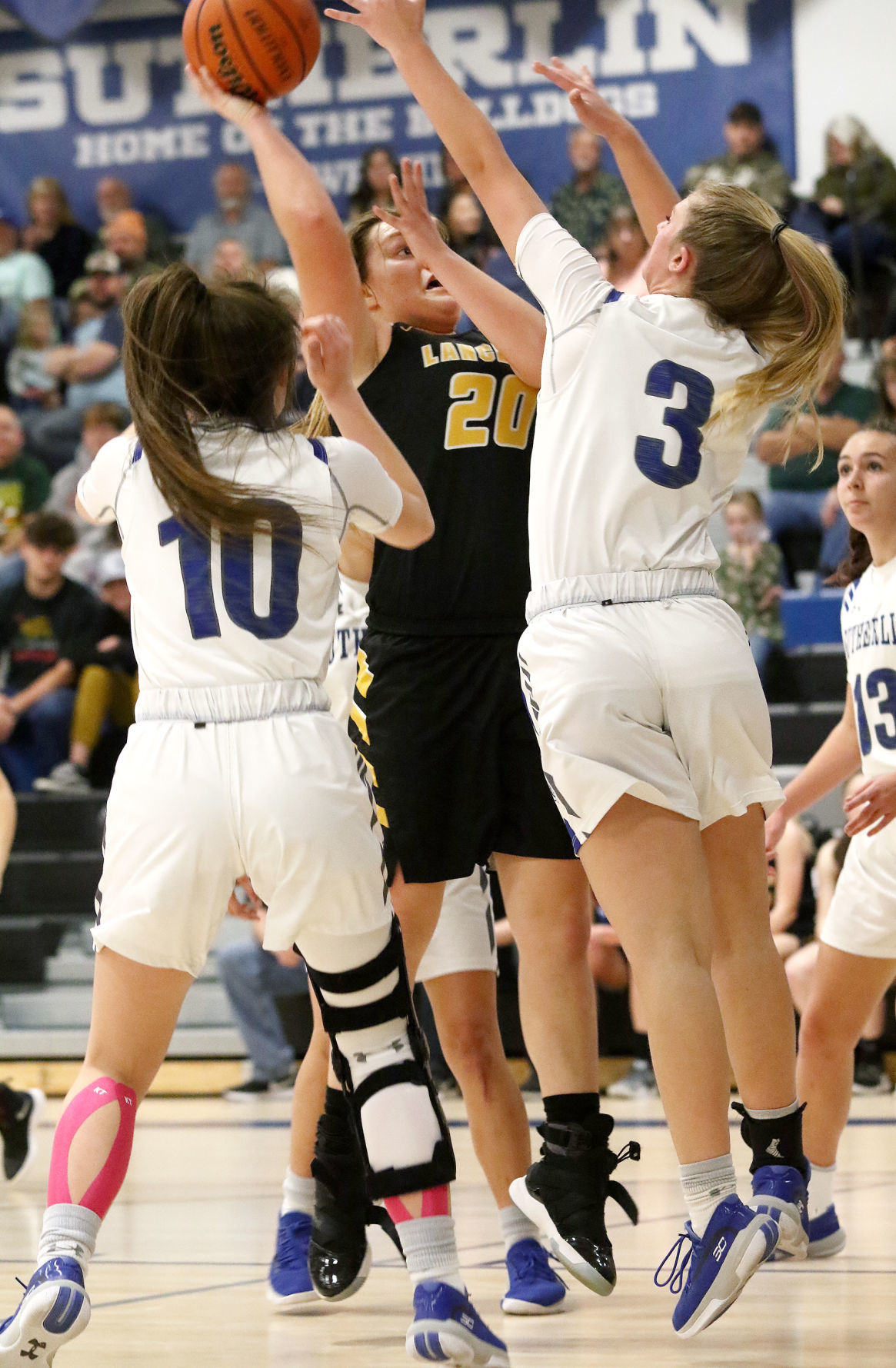 South Umpqua post Kyla Pires shoots in the post between Sutherlin’s Kiersten Haines (10) and Carmen Ganger during the second half Tuesday in Sutherlin. Pires scored a career-high 27 points in the Lancers’ 65-43 loss. 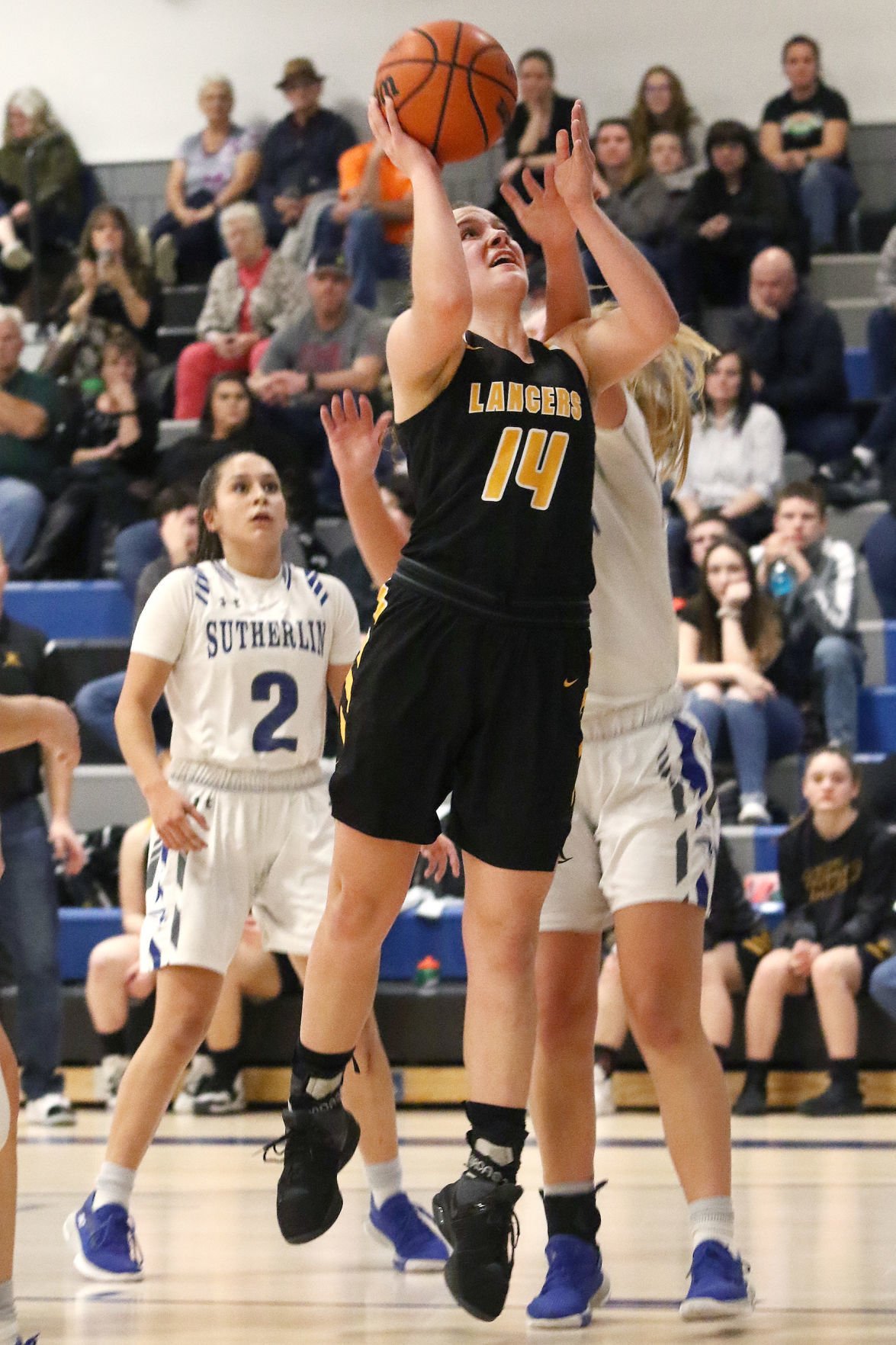 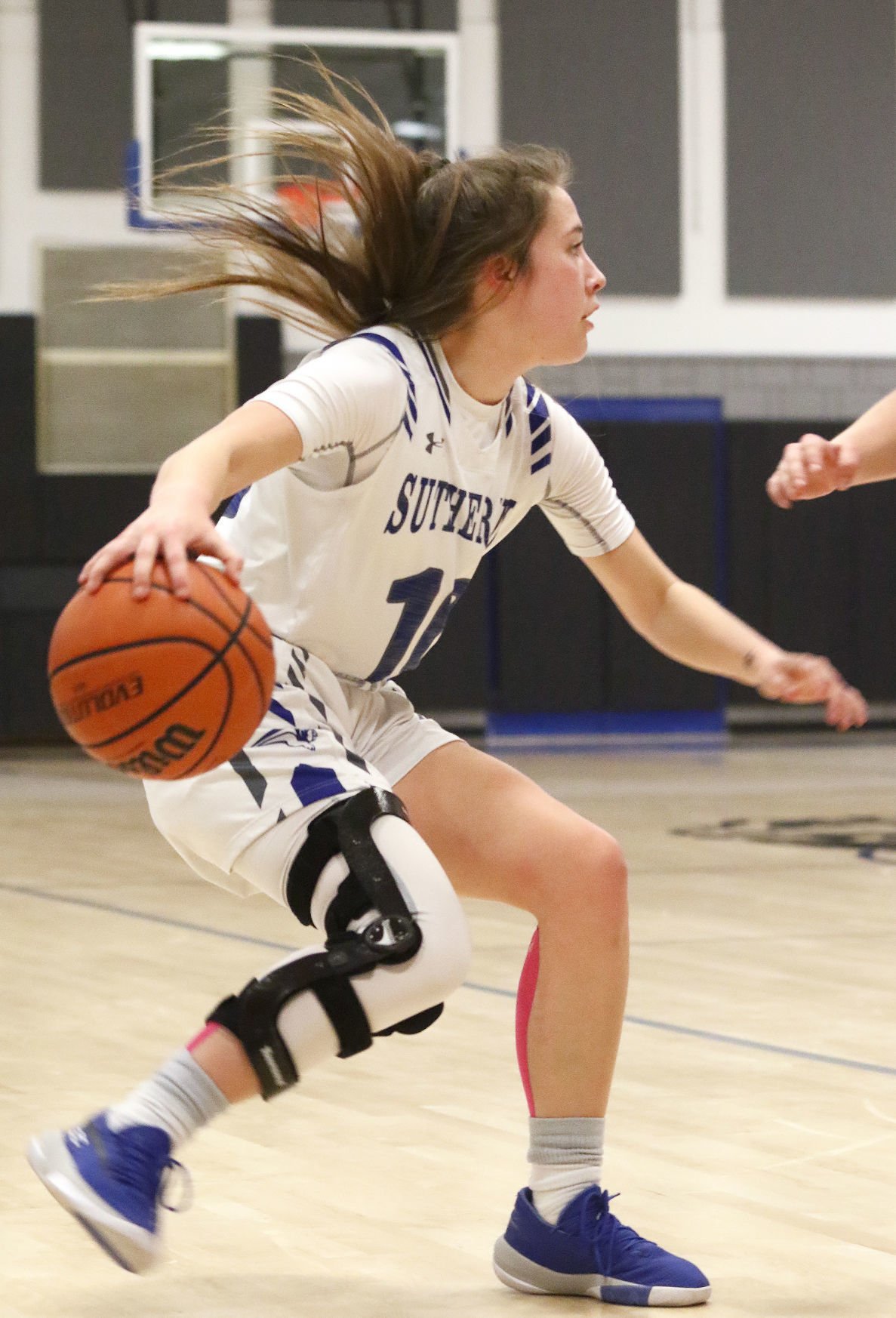 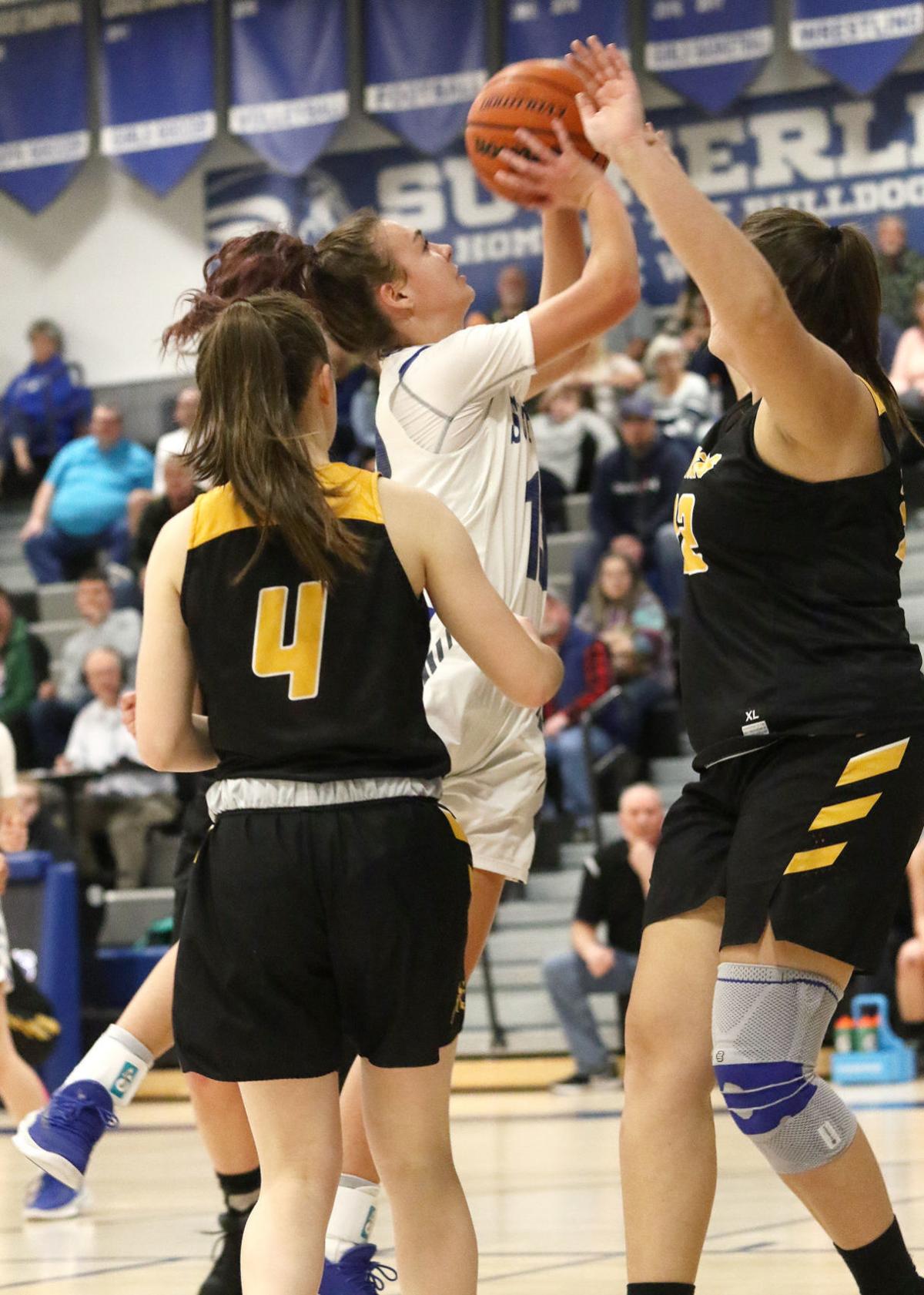 Sutherlin guard Jadyn Vermillion goes up on a pair of South Umpqua defenders during first half play Tuesday in Sutherlin.

Sutherlin High School guard Micah Wicks drives to the basket for a shot during the first half against South Umpqua on Tuesday. Wicks scored 23 points as the Bulldogs won the Far West League game, 65-43.

South Umpqua post Kyla Pires shoots in the post between Sutherlin’s Kiersten Haines (10) and Carmen Ganger during the second half Tuesday in Sutherlin. Pires scored a career-high 27 points in the Lancers’ 65-43 loss.

Sutherlin guard Jadyn Vermillion goes up on a pair of South Umpqua defenders during first half play Tuesday in Sutherlin.

SUTHERLIN — Micah Wicks hit a 3-pointer 14 seconds into the game. She was just getting warmed up.

The freshman point guard poured in 23 points and the No. 2-ranked Sutherlin Bulldogs pulled away in the second quarter to hand visiting South Umpqua a 65-43 Far West League girls basketball loss and put a kink in the Lancers’ playoff hopes.

Wicks scored Sutherlin’s final six points in the second quarter to help the Bulldogs (21-2, 9-0 FWL) take a 30-19 lead into halftime.

“Sometimes we forget she’s only a freshman,” Sutherlin coach Josh Grotting said. “She just does things most freshmen can’t do. It’s a lot to ask for a freshman to run everything for us and she just did a fantastic job tonight.”

The effort was a huge lift for Sutherlin, which was without senior forward Abby Masterfield and junior post Amy Dickover, both resting with ankle injuries.

“She’s had a really good stretch over the last three games,” S.U. coach Dusty Pires said. “She’s stronger and more physical than anybody we’ve faced. She’s got the strength to bang heads a little bit.”

“I was really impressed with her,” Grotting added of Kyla Pires. “She has gotten so much better. She should be proud of the career she’s had.”

Jadyn Vermillion added 13 points and Kiersten Haines scored 12 for the Bulldogs, who close out their regular season at Douglas Friday.

Haines hit four 3-pointers on the night, two coming in the third quarter to push the Bulldogs to a 40-25 lead.

“Those couple of 3s by Haines were daggers,” Dusty Pires said. “They have three or four girls who can put up 20 any given night.”

Shalyn Gray added 10 points for the Lancers, who were held without a bucket from behind the 3-point line.

For South Umpqua, the chance at an at-large berth into the Class 3A playoffs is still a reality, and a home win over No. 5-ranked Brookings-Harbor Friday would be a huge shot in the arm.

“I told the girls after the game, we’re going to get this at-large berth. We need to take care of business Friday and get in,” Dusty Pires said. “If we get in, I absolutely believe we can play with anybody.”

The Lancers came into FWL play with an 11-1 record and the No. 10 ranking in the OSAAtoday coaches poll, but suffered a rash of illnesses and injuries which have led to a 14-7 overall record, 3-6 in league play.

“(Monday) was the first time in three weeks we’ve had everybody at practice,” Dusty Pires said. “Even in games when we’ve been at full strength, we haven’t really been healthy. I think this week we’re finally getting over the health thing.”

South Umpqua is currently 15th in the OSAA’s power rankings and would get one of the state’s four at-large bids to the playoffs if the rankings stand pat through Friday’s games.

“I really do hope they get one of those at-large bids,” Grotting said. “They are a tough matchup for us with their physicality and the size of their guards.”

Dusty Pires is hopeful his team can add a nonleague game some time next week in an effort to improve his team’s standing in the power rankings.

“Our rankings are still alive, but we’re trying to get an extra game to try and help that a little bit,” he said.

No. 2 South Medford runs away from Roseburg for 82-33 victory

Oakland pulls off another CVC playoff win on road, knocks out Regis

No. 2 South Medford runs away from Roseburg for 82-33 victory