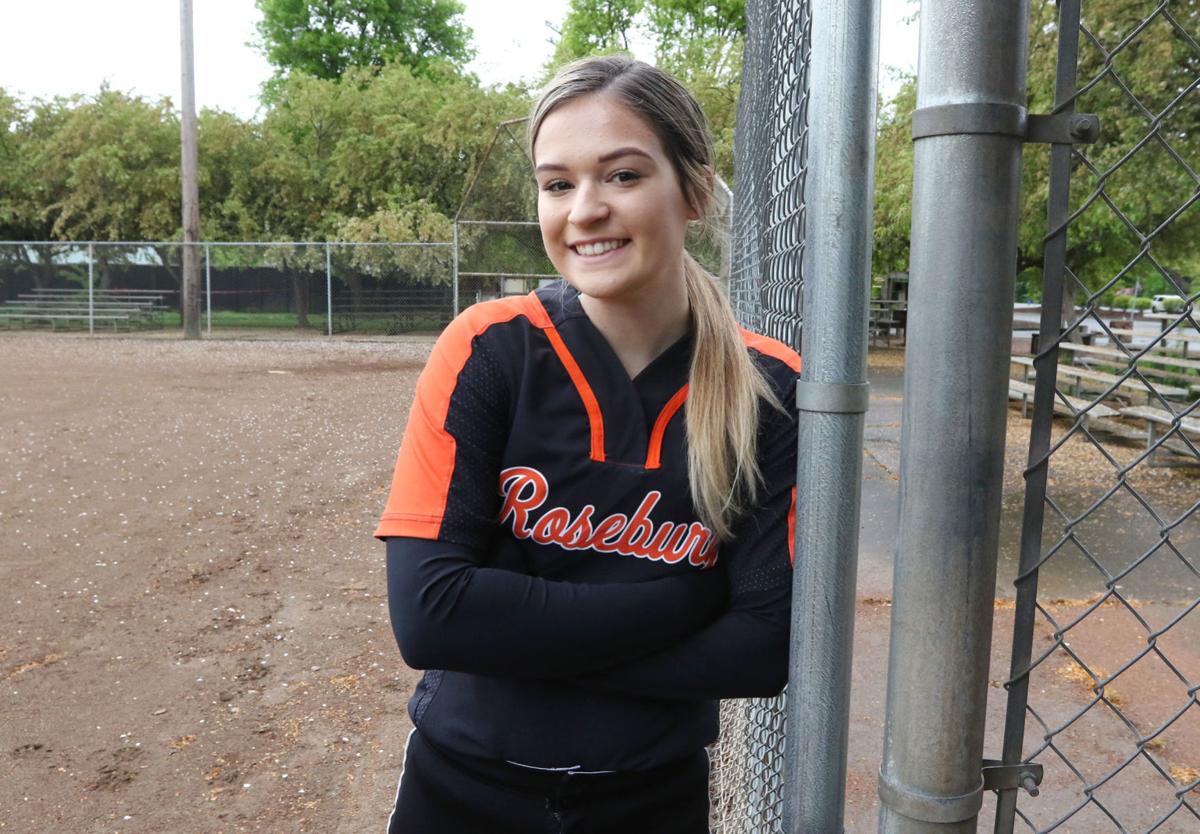 Senior Ericka Allen and her teammates won’t have a chance to take the field for the Roseburg High School softball team this season due to the coronavirus pandemic. 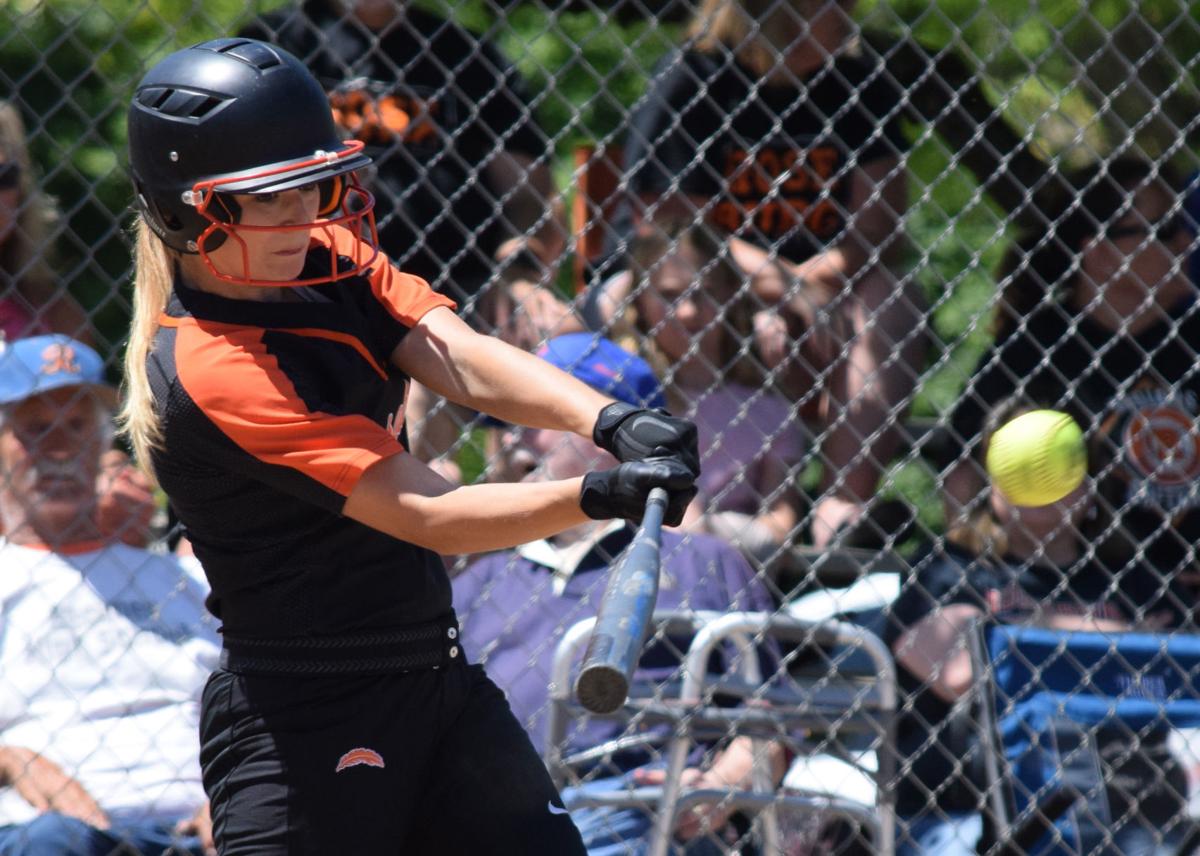 Roseburg’s Ericka Allen connects for a hit against Sheldon during a Southwest Conference game at Stewart Park in Roseburg in 2019. 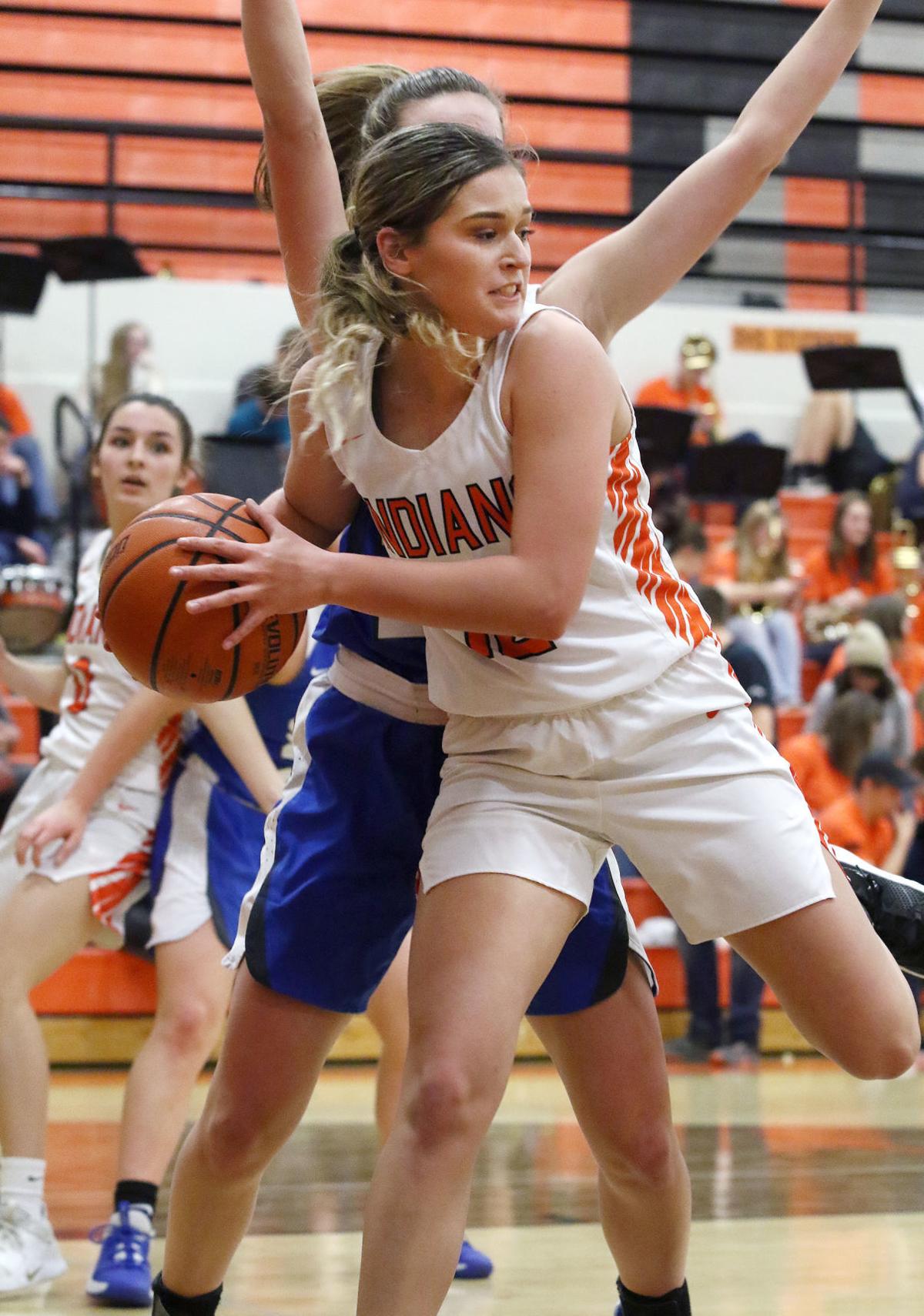 Roseburg guard Ericka Allen looks to maneuver against South Medford during a Southwest Conference girls basketball game this past season. 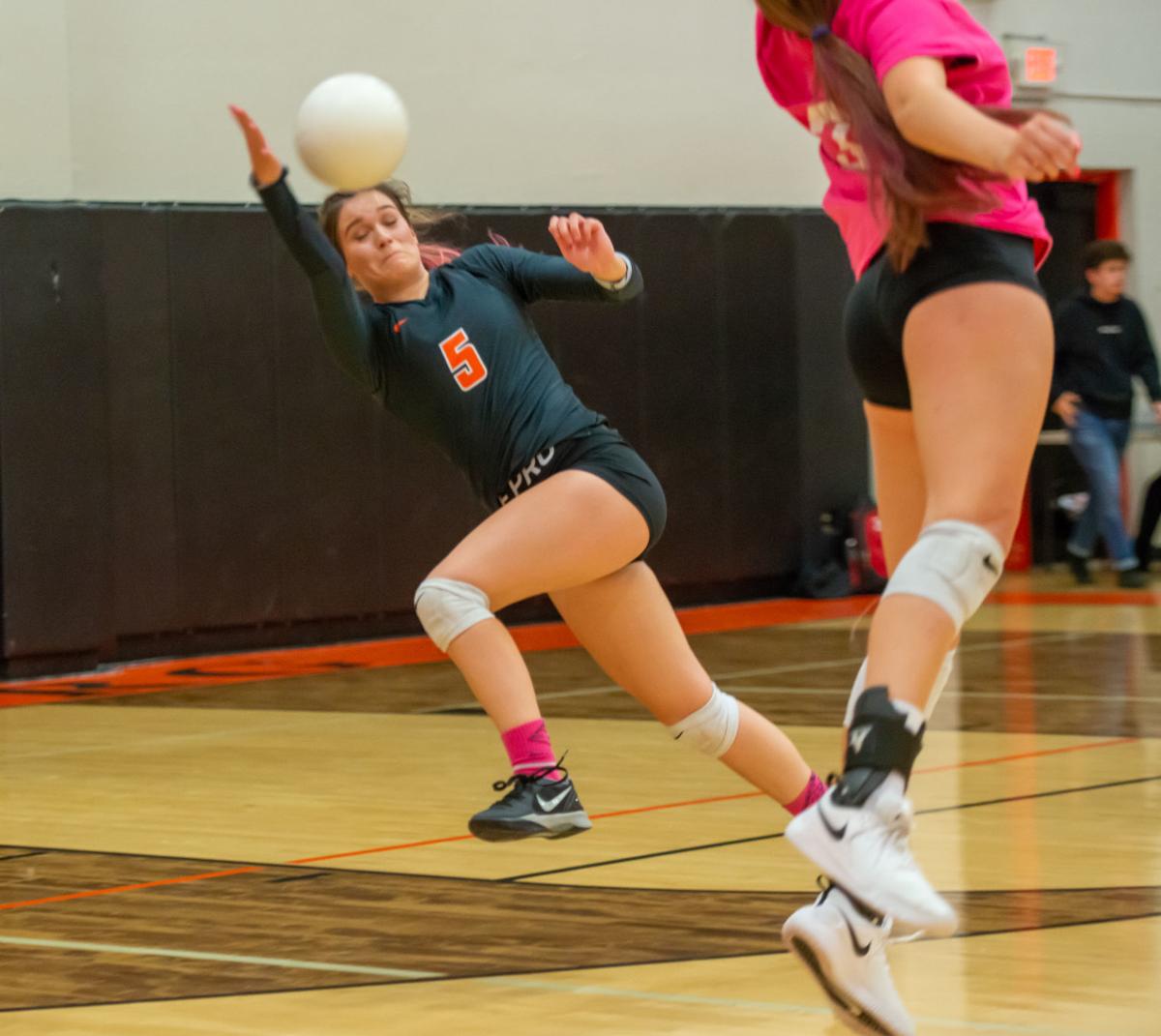 Roseburg libero Ericka Allen makes a dig to keep a ball alive during a Southwest Conference match against North Medford at Robertson Memorial Gym in 2019. Allen received honorable mention in the all-conference voting. 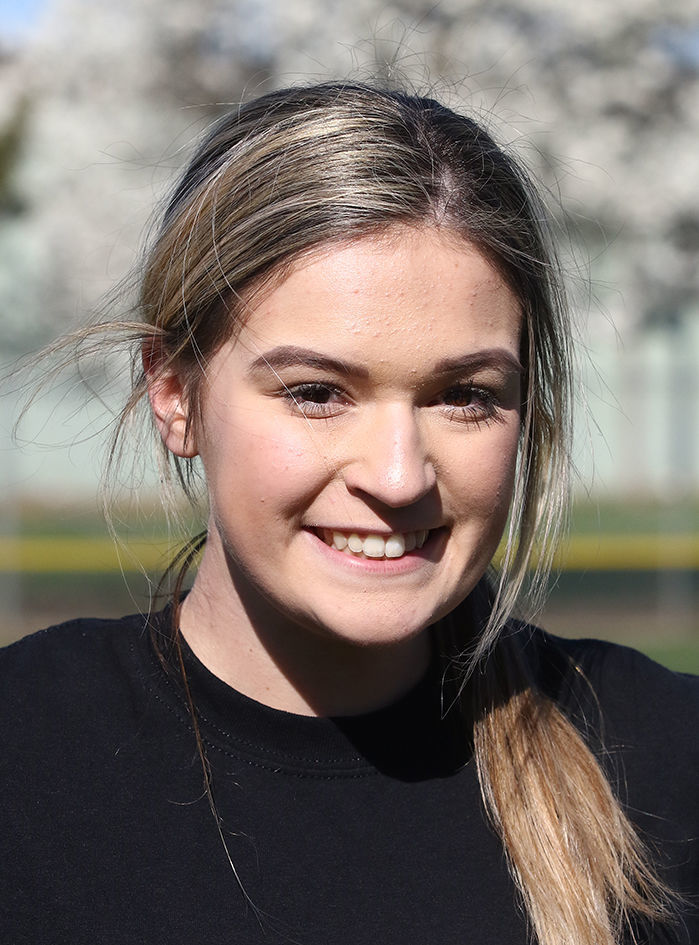 Senior Ericka Allen and her teammates won’t have a chance to take the field for the Roseburg High School softball team this season due to the coronavirus pandemic.

Roseburg’s Ericka Allen connects for a hit against Sheldon during a Southwest Conference game at Stewart Park in Roseburg in 2019.

Roseburg guard Ericka Allen looks to maneuver against South Medford during a Southwest Conference girls basketball game this past season.

Roseburg libero Ericka Allen makes a dig to keep a ball alive during a Southwest Conference match against North Medford at Robertson Memorial Gym in 2019. Allen received honorable mention in the all-conference voting.

Ericka Allen was going to be the lone senior on the Roseburg High School softball team this spring.

It was supposed to be her turn to lead a young squad with only four returning starters, to be a role model and show the underclassmen the work it takes to achieve success on the diamond.

The two-time first-team All-Southwest Conference outfielder — who will continue her softball career next year at College of the Siskiyous in Weed, California — was expecting her last high school season to be the best one.

“I was excited about this season,” Allen said during an interview on Thursday. “We had a lot of younger girls who had some big shoes to fill, but I felt we were going to do pretty well.”

Unfortunately, her senior softball season will become memorable for the wrong reasons.

The coronavirus outbreak forced the Oregon School Activities Association to shut down high school spring sports practice in mid-March and the season was officially canceled on April 8.

A devastating blow for all the athletes and coaches around the state, and beyond.

“I’ve definitely been struggling,” Allen admitted. “It’s been pretty hard, knowing that my senior season was taken away from me. I’m doing better ... I’ve got a job, so I’m staying busy. But it’s hard right now.

“I still think about it. I can’t dwell on it because it’s done now, but it still sucks when I think about it. It’s weird taking a year off (from softball), and it’s hard because I can’t control it.”

At least the 5-foot-5 Allen had the opportunity to compete in her other sports this school year. She was a three-sport athlete for the Indians, playing volleyball in the fall and basketball in the winter.

But softball is her favorite, and best sport.

“Softball has definitely made me the person I am today,” said Allen, who turns 18 on May 11. “I started when I was really young, with T-ball, and I played with all the boys.

“It has taught me a lot of life skills, more than just softball. Working with people, getting over emotions and going through stressful times. I love the intensity during the games, the adrenaline rush you get.”

Allen credits her father, Scott, with getting her involved with sports.

“He’s the one who pushed me through,” she said. “We’d spend hours and hours in softball, and I’m thankful for that.”

Dave Blevins, in his first season as Roseburg’s head softball coach, has watched Allen progress over the years in school and summer ball.

“I’ve been around Ericka a long time and she’s a great kid,” Blevins said. “She’s got a good head on her shoulders ... super smart and her work ethic is off the charts. She’s a huge competitor. She gets down on herself, but it lasts for only a couple of minutes and she never takes it back out on the field.

“She’s a quiet leader, she does lead by example and everybody looks up to her. Everybody deserves a senior year and every time I think about her not having one it puts a knot in my gut. She’ll be missed.”

Allen’s best individual season for the Tribe came as a sophomore in 2018, when she batted well over .400 and led the team in hitting and received third-team all-state honors. Roseburg won 50 games over the past three years, advancing to the state quarterfinals in 2019 before losing 2-1 to second-seeded Sunset.

Allen came up with a few of her favorite softball moments at Roseburg, including a doubleheader sweep of No. 1-ranked Sheldon, 10-5 and 5-3, at Stewart Park on her birthday to end the regular season last year. The Irish went on to win the Class 6A state title.

A 9-4 victory over No. 2 Grants Pass at home last year and a 6-3 upset of No. 3 North Medford (the defending state champion) on the road in 2018 are among the other highlights. One of Allen’s top performances came against the Cavers at home in 2018, when she went 4-for-4 with a bunt single and walk in a 7-5 loss in eight innings.

“Ericka’s what every coach dreams about getting to coach,” Tornell said. “She’s one of those athletes you love to be around. Great character, personality, teammate and passionate. You always knew she’d give it everything she had. I never had a day when I had to ask her to step it up.”

Allen had a solid senior volleyball season as a libero under first-year head coach Vicki Crowl, receiving honorable mention in the all-conference voting. The Indians finished 10-14 overall, losing to Mountainside in the first round of the state playoffs.

Allen has no regrets about playing three sports instead of specializing in one.

“Ever since I was young, I wanted to graduate as a three-sport athlete,” she said. “I’ve always stayed busy playing all three sports and it’s something I’ve loved to do.”

One last wish for Allen is having a graduation ceremony of some form with her classmates.

“I really hope they can put on some kind of graduation,” she said. “I’d just like to have a ceremony, I don’t care when it is. It’s hard to go through 12 years of school and know your graduation and all of those things you look forward to as a young kid get taken away from you.”

Carrying a 3.7 grade point average at RHS, Allen’s looking forward to the next chapter of her life at COS and possibly Oregon Tech after that. She’s looking at a career in the medical field.

“I’m a little nervous to leave my parents, but excited to start something new and continue my softball career,” Allen said.

What: A senior three-sport athlete at Roseburg High School (volleyball, basketball and softball).

College: College of the Siskiyous in Weed, California, for softball.

Notable: Earned seven varsity letters in sports at RHS; two-time first-team All-Southwest Conference selection as an outfielder in softball; made third-team all-state in Class 6A as a sophomore in 2018; honorable mention All-SWC libero in volleyball as a senior; employed by Smokin' Friday BBQ.