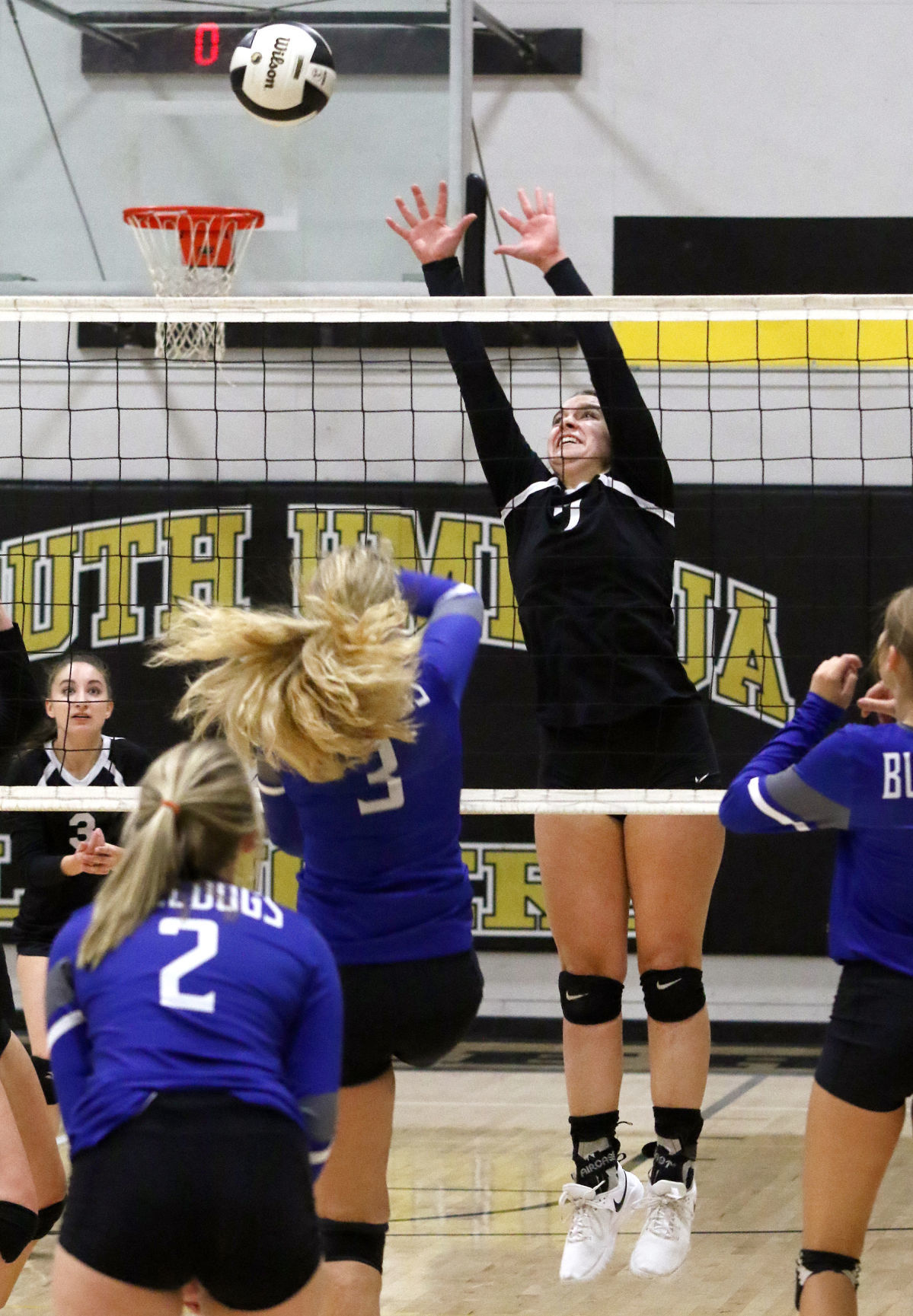 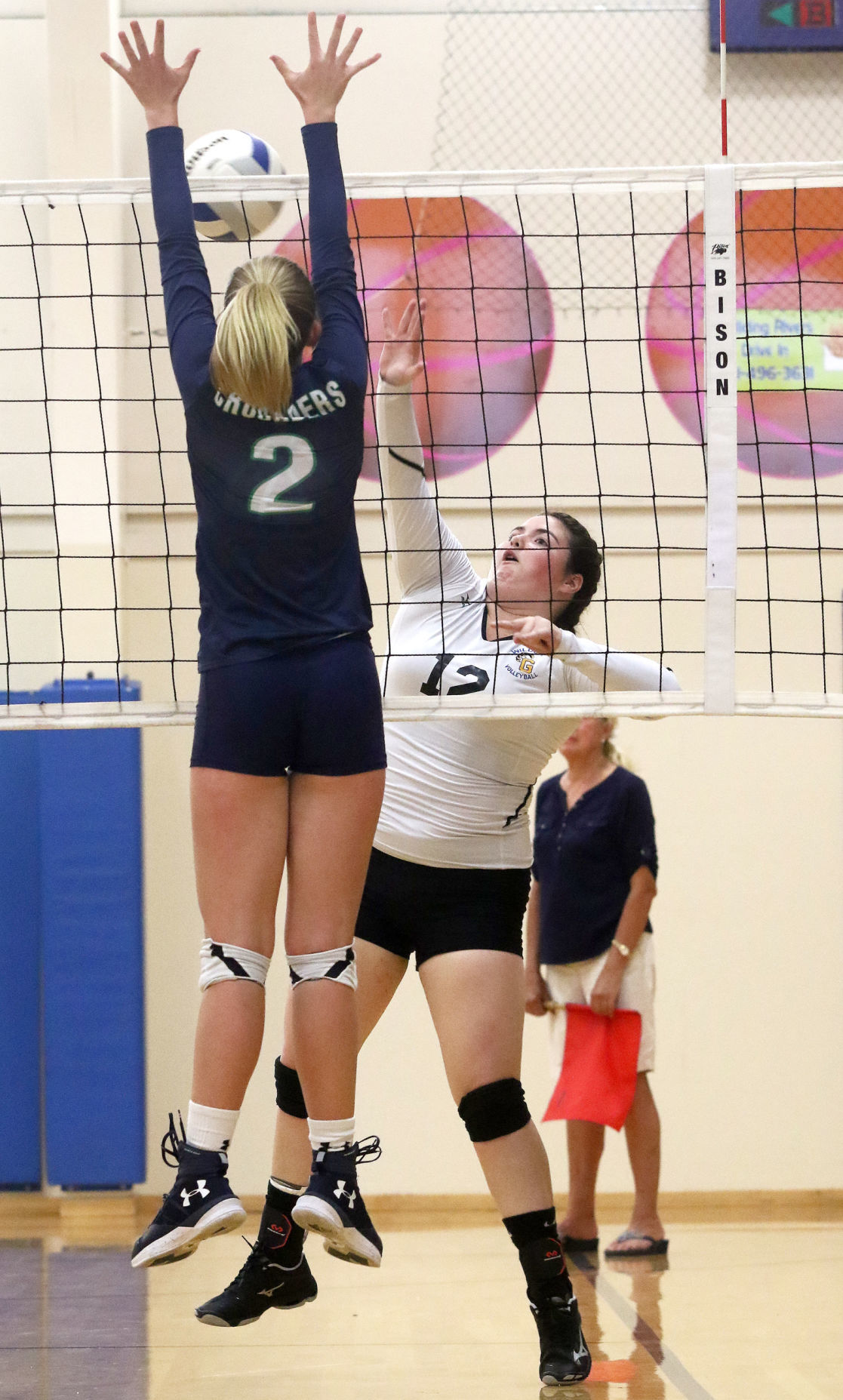 Glide’s Kylie Anderson spikes the ball on St. Mary’s defender Grace Johnson during a nonleague match in Glide earlier this season. The Wildcats will play at top-ranked Kennedy in the first round of the 2A playoffs Saturday.

Glide’s Kylie Anderson spikes the ball on St. Mary’s defender Grace Johnson during a nonleague match in Glide earlier this season. The Wildcats will play at top-ranked Kennedy in the first round of the 2A playoffs Saturday.

Five Douglas County prep volleyball teams will be involved in playoff matches on Saturday, needing wins to advance to their state tournaments.

Sutherlin, which shared the Far West League title with Cascade Christian and won the league tournament, is looking forward to a rematch with Harrisburg. The Eagles, who tied for second in the Mountain Valley Conference, defeated the Bulldogs in straight sets in Harrisburg on Sept. 7.

“We didn’t have Alyssa Fox (a senior outside hitter) in that match and we’re a totally different team now,” Sutherlin coach Kathy Rice said. “Alyssa’s been a huge factor, but all the other girls are playing better. We’re playing more solid and with more confidence.

“I watched Harrisburg play the other night and feel we match up well. Getting a home match is huge for us, we play (well) with our crowd.”

Fox transferred to Sutherlin from 6A Roseburg, where she was a first-team all-conference player. The Bulldogs have a talented group of underclassmen who have meshed with the four seniors.

The Harrisburg-Sutherlin winner will face the winner between No. 16 Warrenton (13-12) and No. 1 Santiam Christian (22-0) in the quarterfinals.

South Umpqua, which lost to Sutherlin in the FWL tournament title match last Saturday, plays an Oregon Episcopal club that finished second in the Lewis & Clark League during the regular season.

The Lancers lost to the Aardvarks in pool play at the Creswell Tournament on Oct. 5.

“They’re good. They have two really tall girls,” S.U. coach Sarah Gray said. “Having a home match is going to be huge for us because we’ll have our fans there. I’m very proud of my team for making it this far.”

Glide is familiar with Tri-River Conference champion Kennedy, which is ranked No. 1 in the 2A coaches’ poll. The Trojans defeated the Wildcats in straight sets in a quarterfinal match at the state tournament last year and went on to finish fifth.

Glide finished second in the Southern Cascade League after starting the season with a young, inexperienced team. The Wildcats are led by junior middle blocker Ruby Livingston.

Skyline League champion Days Creek takes a 16-match winning streak into its second-round match against Joseph, which tied for second in the Old Oregon League.

The Wolves, No. 3 in the 1A coaches’ poll, feature an experienced lineup led by seniors Moriah Michaels and Joleen Crume and junior Ashtyn Slater.

North Douglas advanced to the second round Wednesday with a win over McKenzie in straight sets at home. The Warriors defeated Rogue Valley, the Mountain Valley League champion, in straight sets in the first round last year at home.

The Warriors have some battle-tested players in seniors Nicki Derrick, Natalie Draeger and Rilie-Jo Olds and sophomores Halli Vaughn and Samantha MacDowell.

The North Douglas-Rogue Valley winner takes on the winner between No. 13 Central Christian (17-5) and No. 4 Country Christian (23-10) in the quarters.