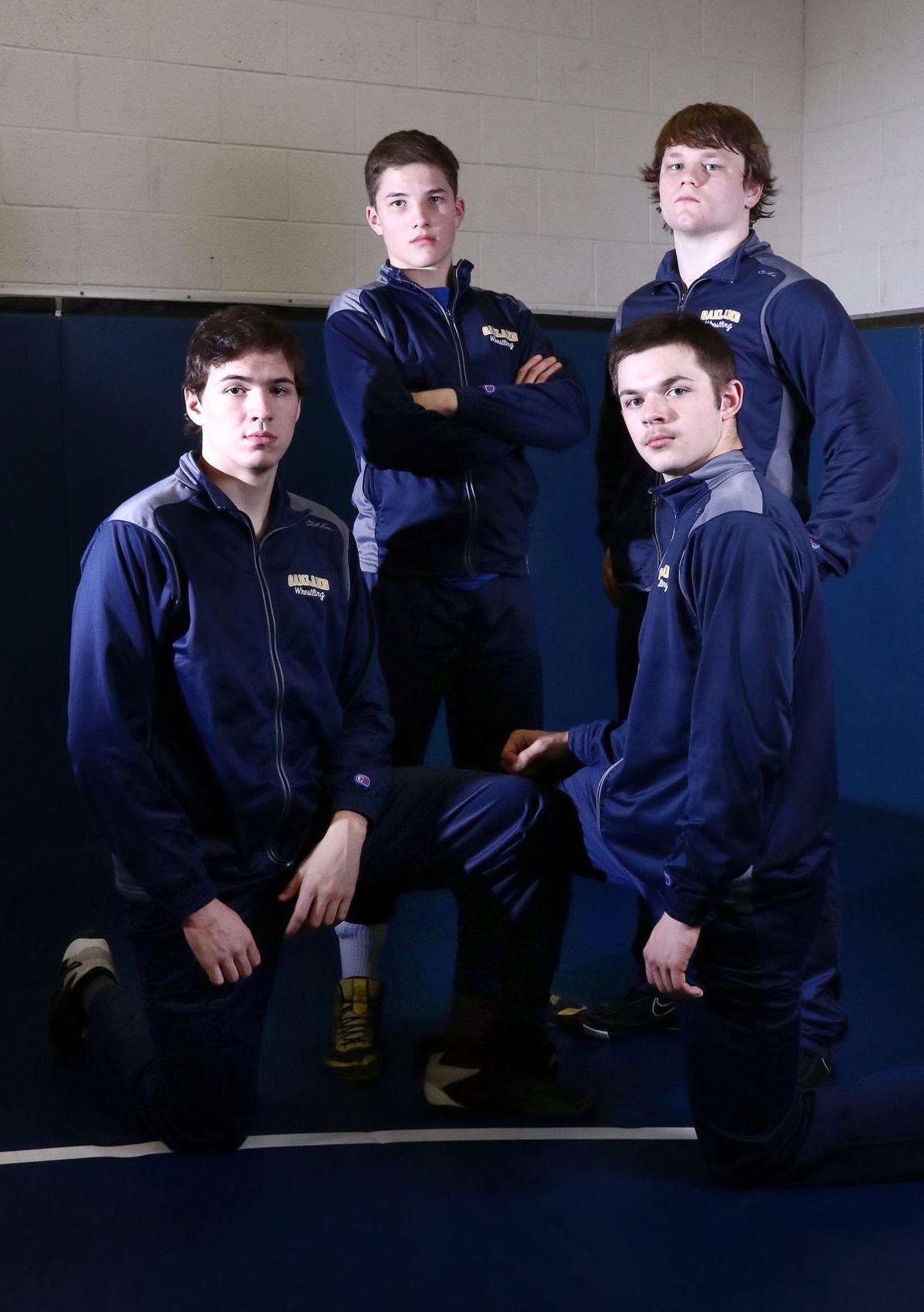 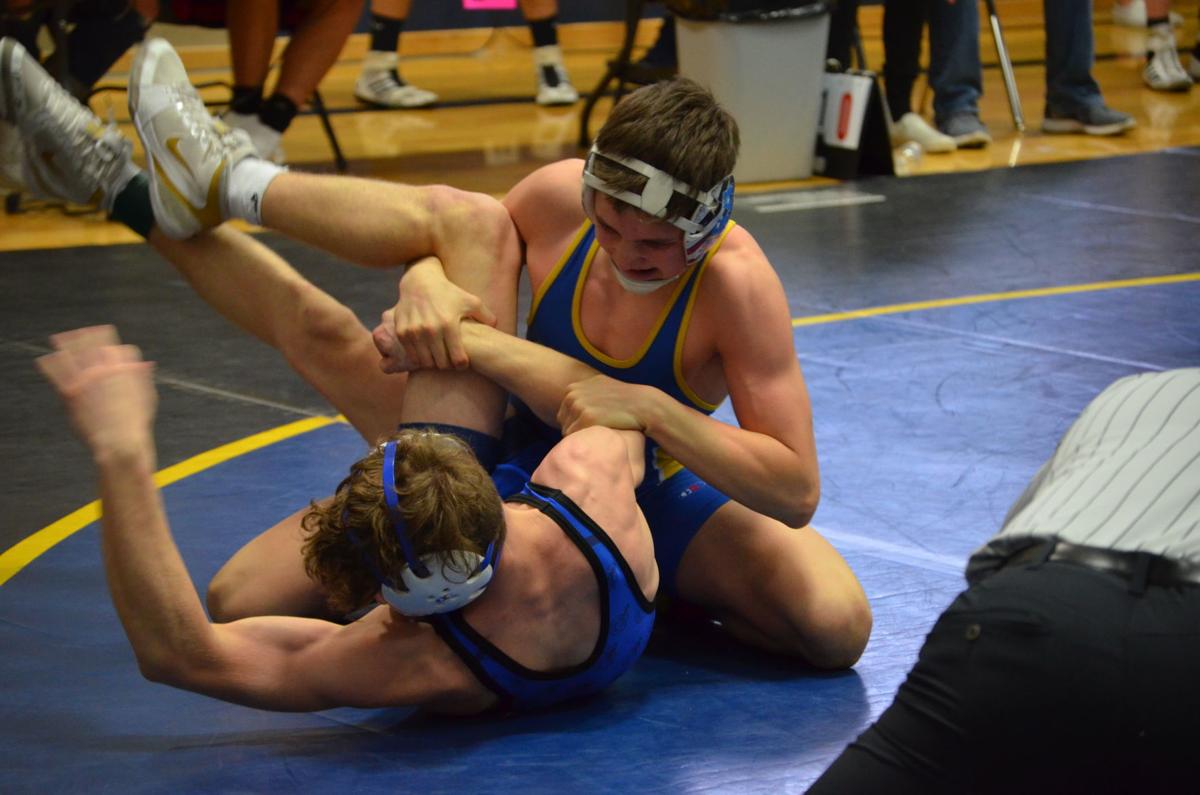 Oakland sophomore Kaleb Oliver works for a first-round pin of Central Linn’s Tony Belcastro in the 132-pound title match at the Class 2A/1A Special District 2 championship tournament Feb. 15 at Glide High School. Oliver is the No. 2 seed at this weekend’s state championship tournament, taking a 42-0 record — with 36 pins — to Veterans Memorial Coliseum in Portland.

Oakland sophomore Kaleb Oliver works for a first-round pin of Central Linn’s Tony Belcastro in the 132-pound title match at the Class 2A/1A Special District 2 championship tournament Feb. 15 at Glide High School. Oliver is the No. 2 seed at this weekend’s state championship tournament, taking a 42-0 record — with 36 pins — to Veterans Memorial Coliseum in Portland.

OAKLAND — As a freshman 132-pounder, Austin VanHouten qualified for the Class 2A/1A state wrestling championships and got pinned twice.

Like thousands of wrestlers before him and hundreds since, the only souvenir he took home from Veterans Memorial Coliseum was his name placard, which was posted at the top of the matside scoring pedestal for each of his two matches.

VanHouten failed to return to the state tournament over the next two seasons, and last March, that placard was just one of many beloved items his family lost in a house fire.

When he walked into the Oakland High School wrestling/weight room this past October, his goal was to get back to state and get another placard.

Those goals have shifted dramatically.

“My goal was to get back to state and get a new name card,” the now-senior said. “Now the goal is to win the whole thing.”

VanHouten is the No. 1 seed at 170 pounds for this weekend’s Class 2A/1A state championships in Portland. He’s carrying a 39-9 record on the season and a heightened level of expectations, not only for himself, but for the Oakland wrestling program as a whole.

“One of our team goals at the beginning of the season was to place well at state,” VanHouten said. “Our program has been on the verge of being dropped for years, but (senior) Wil (Powell) and I have been a big part of trying to keep it going. Going to school board meetings and asking them to just give us one more year, two more years and let’s see what happens.”

What happens this weekend could be the catalyst to revive a program that once was strong, then was lost, and appears to have been found once again.

The Oakers have just four entrants in this weekend’s state tournament, but they’re not just any four entrants.

VanHouten, Powell (195 pounds), junior Brayden Tackett (182) and sophomore Kaleb Oliver (132) are all district champions, and also are all top-three seeds in their respective championship brackets.

It’s not outside the realm of possibility to think that Oakland not only can earn individual hardware, but could bring home the school’s first top-four finish in a state wrestling championship since 1984.

“We’re not going up there individually,” said first-year head coach Ian Patt, who represented the Oakers at state as a senior in 2014. “We definitely have a team mindset going into it, and the ranking today kind of affirmed that.”

That ranking was the final Class 2A/1A team rankings released by the Oregon Wrestling Forum (www.owf.net). The Oakers, who had cruised under the radar for nearly the entirety of the season, were slotted fourth as a team behind Culver, Pine Eagle and Reedsport. It was the first time the Oakers had cracked the OWF’s top 10 this season.

Oakland is ranked ahead of Class 2A/1A Special District 2 champion Central Linn, which beat Oakland 32-29 in a dual meet earlier this season a week after placing second at the Oregon Wrestling Classic.

“(Tuesday) at practice, it was like, ‘Look guys, it’s right there if we go out and wrestle the tournament we can,’” Patt said. “We have a great shot at finishing in the top four.”

Having a small contingent and earning a trophy at the state tournament — especially at the 2A/1A level — is not unusual, but it requires nearly every wrestler to hit the podium, ideally with a top-three individual finish.

Several 2A/1A schools have taken home team hardware with just four or fewer wrestlers, the most impressive effort being Gold Beach in 2012, which took home third place in the team standings despite qualifying only three wrestlers, all of whom won state championships.

“If we go up there and have a strong showing, not only could we come home with some individual hardware, but we could grab a team trophy,” Powell said.

Powell is having himself a solid senior year thus far. Named a second-team all-state linebacker in football — helping lead Oakland into the Class 2A state quarterfinals — Powell is the No. 3 seed in the 195-pound bracket. But even he wasn’t expecting the success the team as a whole is having this winter.

“Realistically, I didn’t expect this. It’s a bit of a surprise for me,” Powell said. “We had a good core group of guys coming back with myself, VanHouten and Tackett. This year has been marked by a group of good leaders and a bunch of new guys (Oakland had 14 entries at the district tournament) who in a couple of years are going to be part of the next core group.”

Tackett has been firing off the wins for the Oakers as well. The SD2 champion at 182 pounds, Tackett takes a 28-10 record into his first state tournament, and is ranked sixth individually by the Oregon Wrestling Forum.

And then there’s this sophomore who nobody outside of the program had heard of until about mid-December, and now is pretty much impossible to ignore.

Oliver transferred to Oakland from Nederland, Colorado, over the summer. A small mountain town roughly 40 miles from Boulder — and almost the exact same size as Oakland — Oliver’s high school didn’t offer wrestling, so he commuted to Boulder every day for practices and meets.

While he didn’t qualify for the Colorado High School Athletic Association state wrestling tournament as a freshman, he’s been no stranger to a wrestling mat.

VanHouten remembers his early encounters with the new kid.

“I’d heard about him, but wasn’t really sure what to expect,” VanHouten said. “The first day of practice, I was drilling with him and realized then that we might be able to do something.

“I was getting my butt kicked.”

With only 14 wrestlers in the room, it’s not uncommon for sparring partners to be two, three, even four weight classes apart, whatever gives each wrestler the best competition.

“He didn’t play football, so I didn’t know him very well,” Powell said. “I’d heard he was a good wrestler, but I had no idea it was that high of quality. He has just completely elevated our program.”

Patt said he could tell right away he had something special on his hands.

“He was really excited about coming out, and as soon as we got him in the wrestling room, you knew he was a bad guy,” Patt said. “He’s just so super slick on his feet. He went through the ‘takedown line’ (working up through each weight) and he made it all the way to Powell.

Oakland hasn’t had an individual state champion since 2013. That season, David Henry won his third state title and Angus Swan also topped the medals podium. And, with just four wrestlers, the Oakers finished sixth in the team standings.

While undefeated, Oliver is the No. 2 seed in the 132-pound bracket. But with Tackett and Powell both as No. 3 seeds — opposite of their brackets’ No. 1s — and VanHouten on the top line, the Oakers’ fate as a team is purely in their hands.

“My freshman year, we had to fight just to keep the program alive,” Powell said. “It would be amazing to see the program go from dwindling and almost cut to placing at the state tournament.”

By Saturday night, VanHouten might just have something a little more shiny than a name placard to put on display.