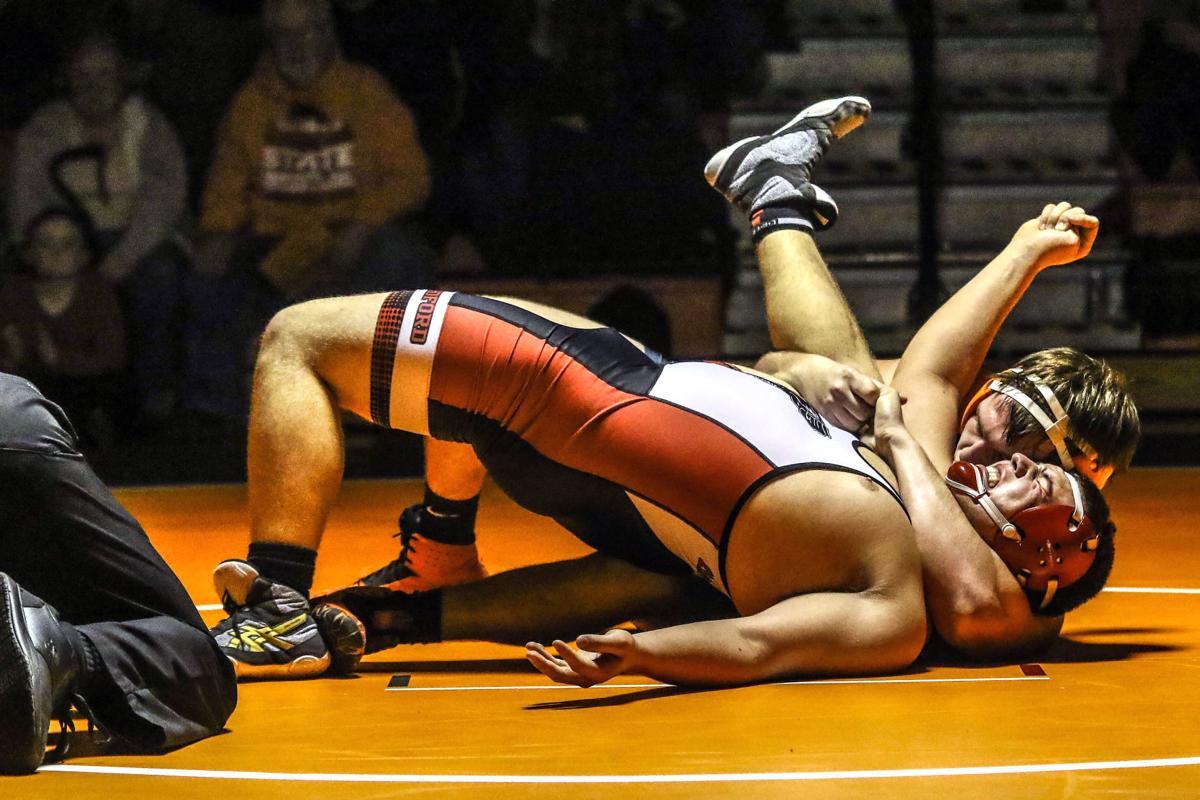 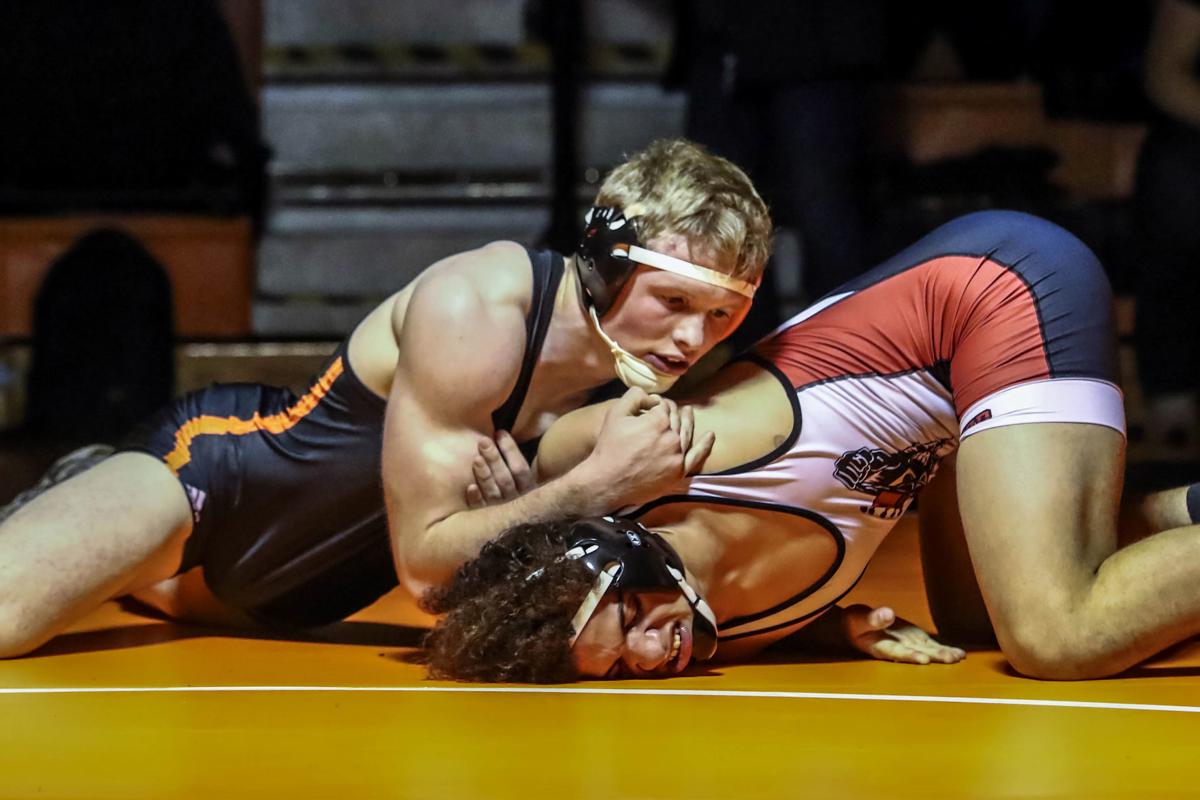 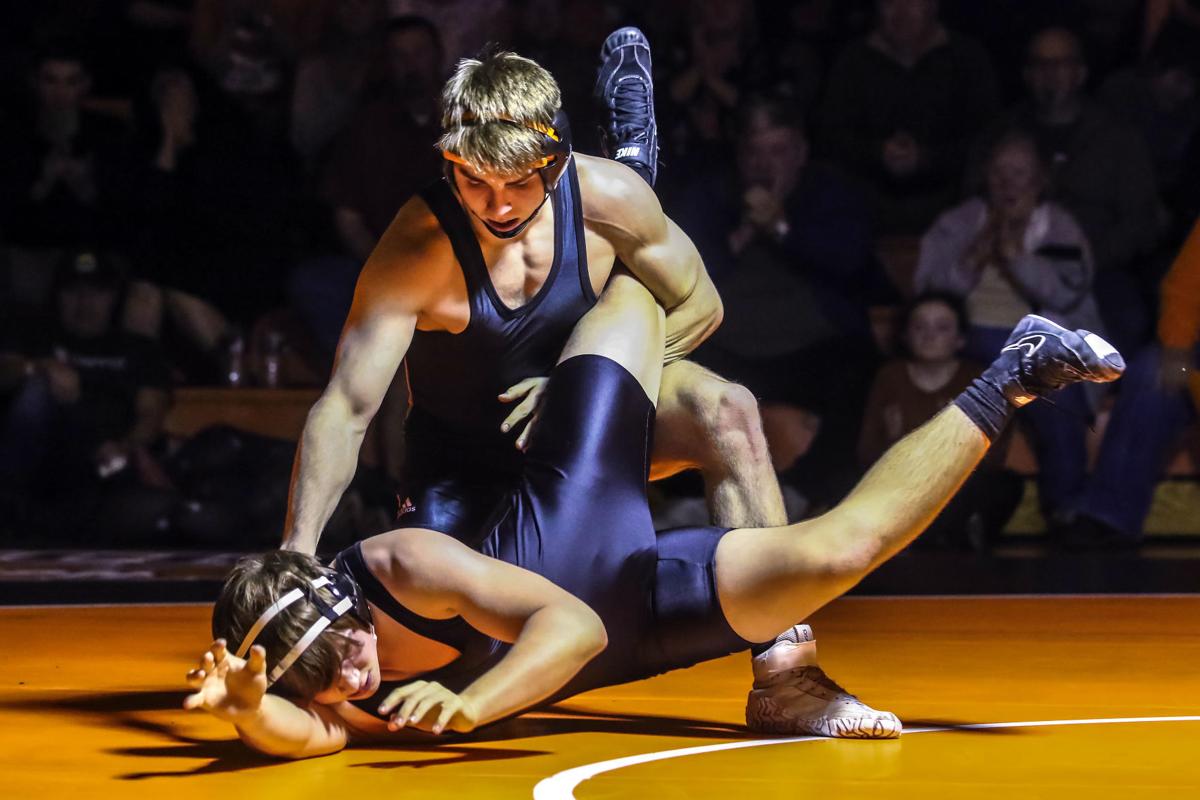 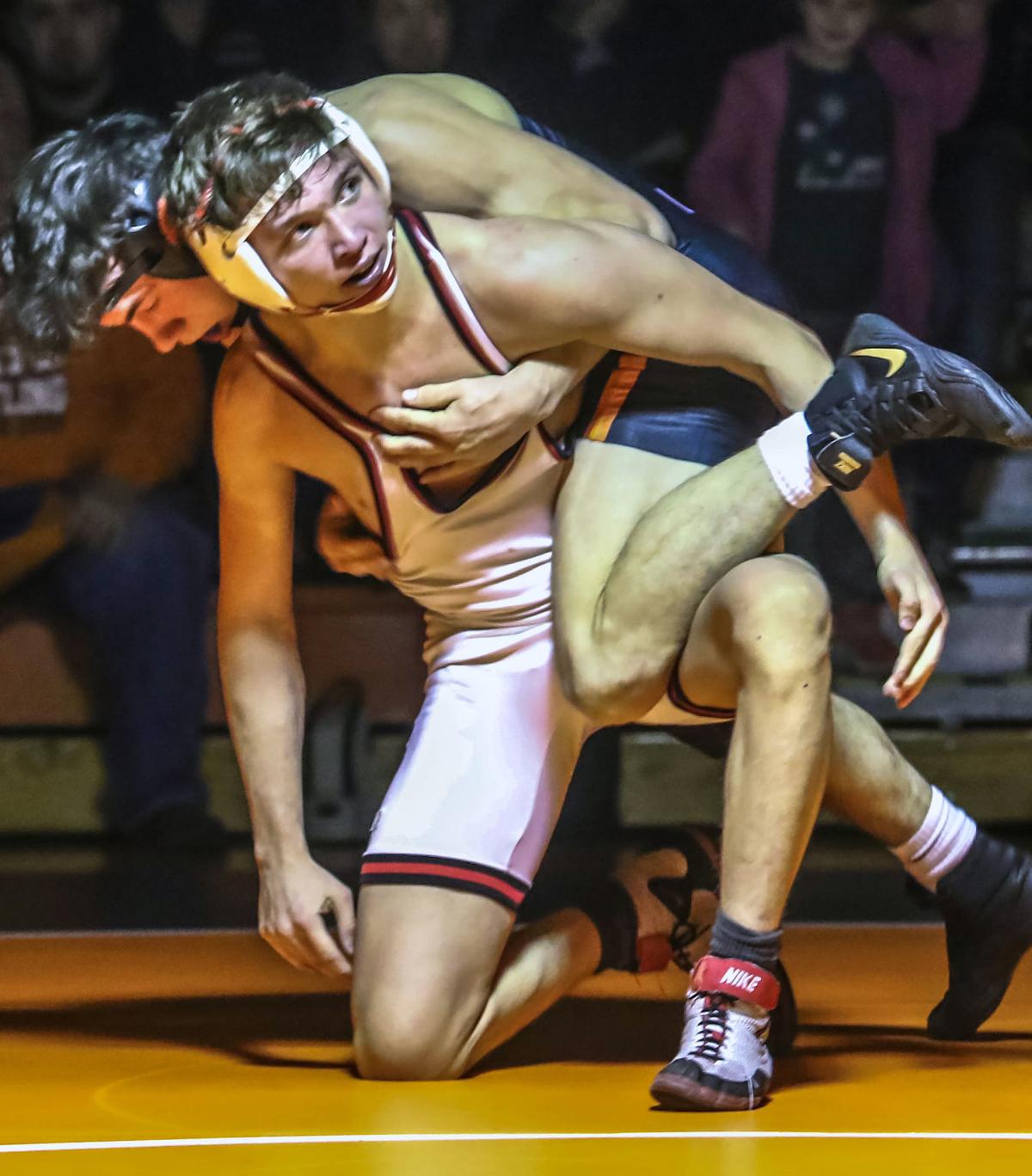 After trailing 3-2 in the first round, Roseburg junior Kahleb Diaz comes back to defeat North Medford’s Enrique Jaime, 6-3, at 132 pounds during a Southwest Conference meet at RHS on Thursday. 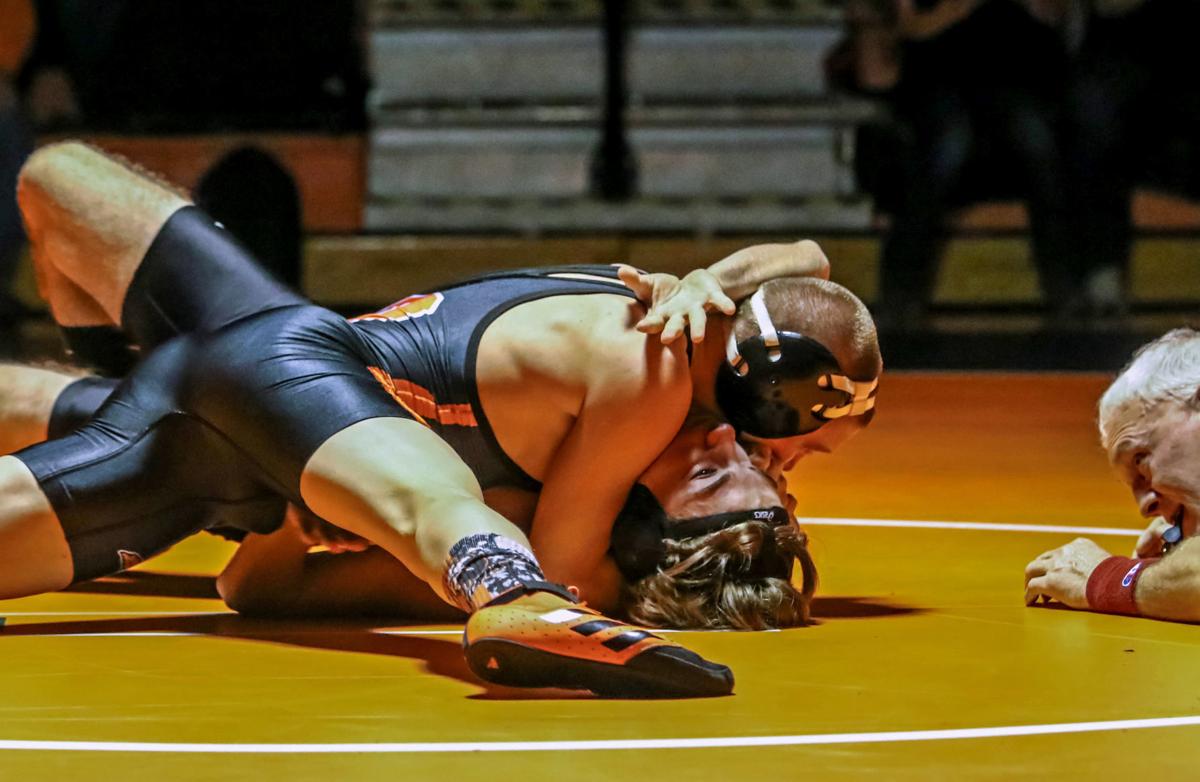 After trailing 3-2 in the first round, Roseburg junior Kahleb Diaz comes back to defeat North Medford’s Enrique Jaime, 6-3, at 132 pounds during a Southwest Conference meet at RHS on Thursday.

The Roseburg wrestling team closed out its Southwest Conference dual meet season by first saluting its seniors in their final home bout, then blowing out a Tornado.

Roseburg, the co-No. 1 in the final OSAAtoday Class 6A coaches poll, recorded five pins — four in the first round and three in less than a minute — and got big wins from junior Kahleb Diaz at 132 pounds and senior Colin Rietmann (160) in a 73-6 flattening of No. 6 North Medford Thursday night at Robertson Memorial Gymnasium.

In five duals, the Indians outscored their SWC opponents 362-25 and gave up double-digit points once, in a 60-10 win over Grants Pass. Roseburg’s only dual meet losses have been a 38-38 criteria home loss to Class 5A No. 3 Thurston and a 51-21 loss to Class 6A co-No. 1 Newberg in the championship of the Oregon Wrestling Classic.

“This was an important night for us,” Roseburg coach Steve Lander said of his seniors’ last home bout. “It’s never an enjoyable night, but wrestling well certainly helps the night for sure.”

The Tribe accepted six forfeits, including the opening match at 113 pounds. Sophomore Nash Singleton followed with the fastest pin of the night at 120 pounds, using a “fireman’s carry” to put North Medford freshman Kaden Baker on his back immediately and clocking a fall 27 seconds into the match.

Diaz, the second-ranked Class 6A 126-pounder by the Oregon Wrestling Forum, avenged a 2019 pin against the Tornado’s Enrique Jaime (No. 4, 132), rallying in the second and third rounds for a 6-3 win.

Diaz fell into a 3-2 hole after one round, but evened the match with an escape 28 seconds into the second round. A late takedown gave the Roseburg junior a 5-3 edge, and his escape with a minute left in the third period pushed his lead to 6-3 and elicited a roar from the Indians faithful.

“I just wanted to get him back,” Diaz said. “The first time I got down I was able to get out pretty quickly. I knew he was a leg rider, and I was trying to shake him but couldn’t quite kick out.”

After two more forfeits, senior Tristin David scored a 29-second pin for the Indians at 152 pounds. Senior Colin Rietmann fell into a quick hole in his 160-pound bout with North Medford sophomore Atreaue Roe, but rallied to ultimately score a 15-4 major decision.

Roe led 4-2 after the first round with a pair of takedowns, but Rietmann dominated the match from there, outscoring Roe 6-0 in the second period and nearly scoring a fall late in the third as time expired.

“I came out a little bit hot. I just needed to calm down and focus on my training,” Rietmann said, sweat still dripping from his effort. “Our philosophy is to work harder in the wrestling room than anybody in the state, and to be able to rely on that training in pushing the pace.”

Junior Darian Thacker (170; 49 seconds) and senior Rourke Martin (182; 1:38) followed with first-round pins for the Indians, and junior Rogan Coffman (195) closed out the contested matches with an early second-round pin.

“It was pretty emotional,” Rietmann said of his and his classmates’ final home matches. “We’ve all been wrestling together since we were probably 4 years old. It’s way more of a brotherly bond than just friends.”

Roseburg will have one last dual meet Saturday, traveling to Prineville to take on Class 5A No. 2 Crook County. The SWC district championships are scheduled for Feb. 14-15 at South Medford High School.