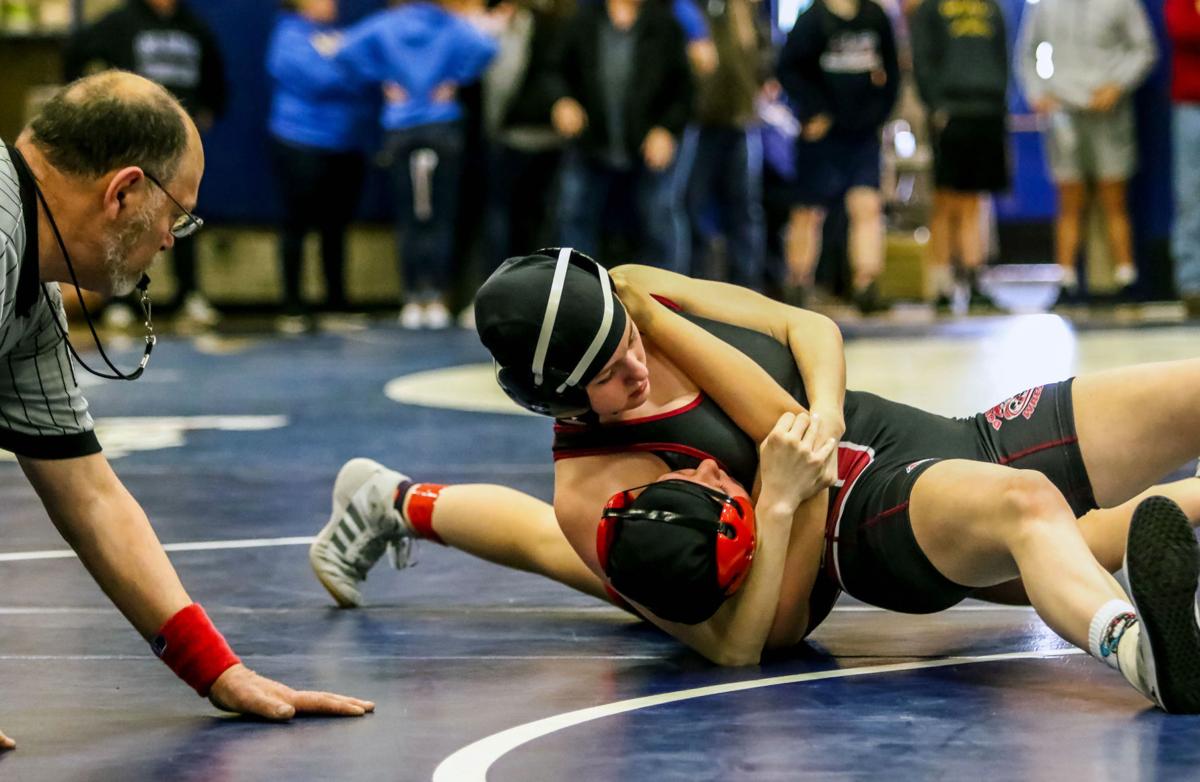 Douglas wrestler Elexis Walker prepares to pin her opponent in the first round of the Sutherlin Wrestling Classic last Saturday. 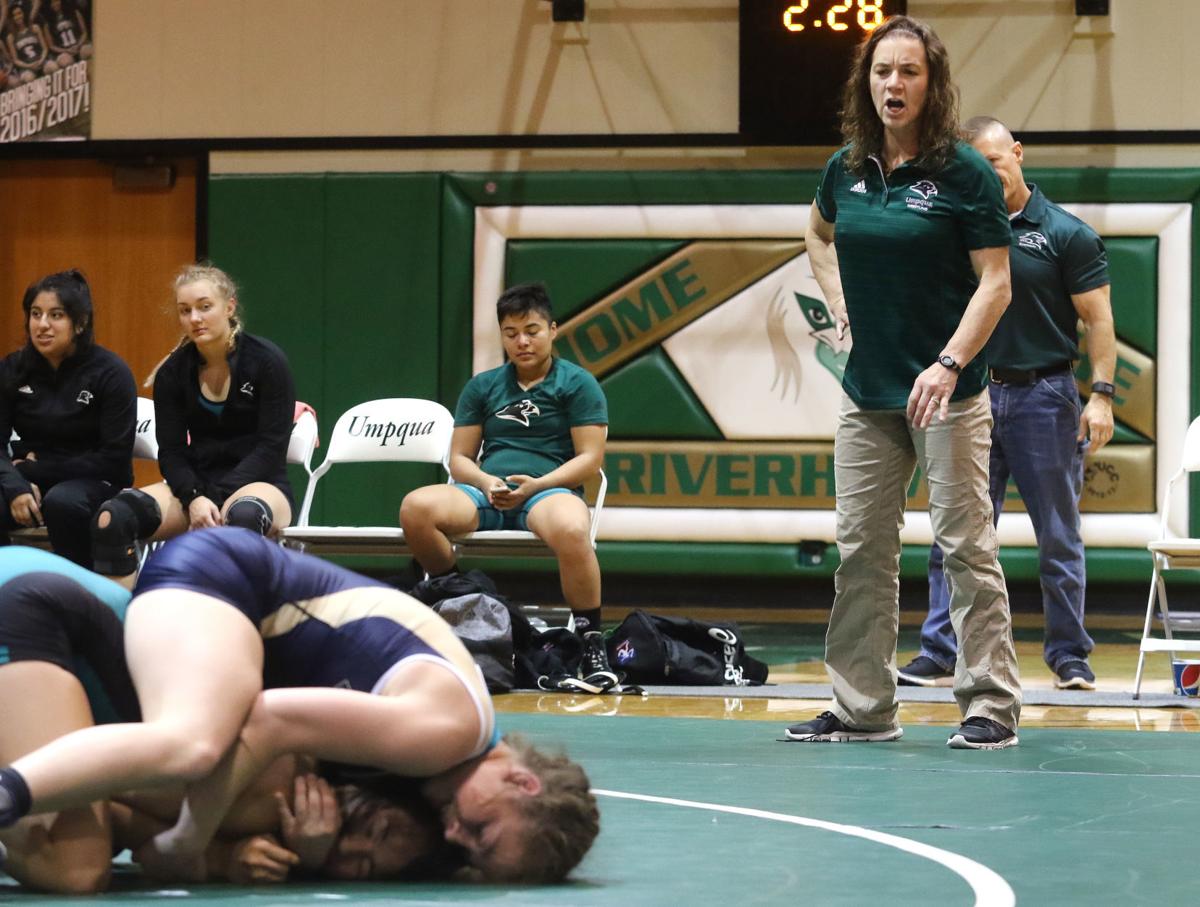 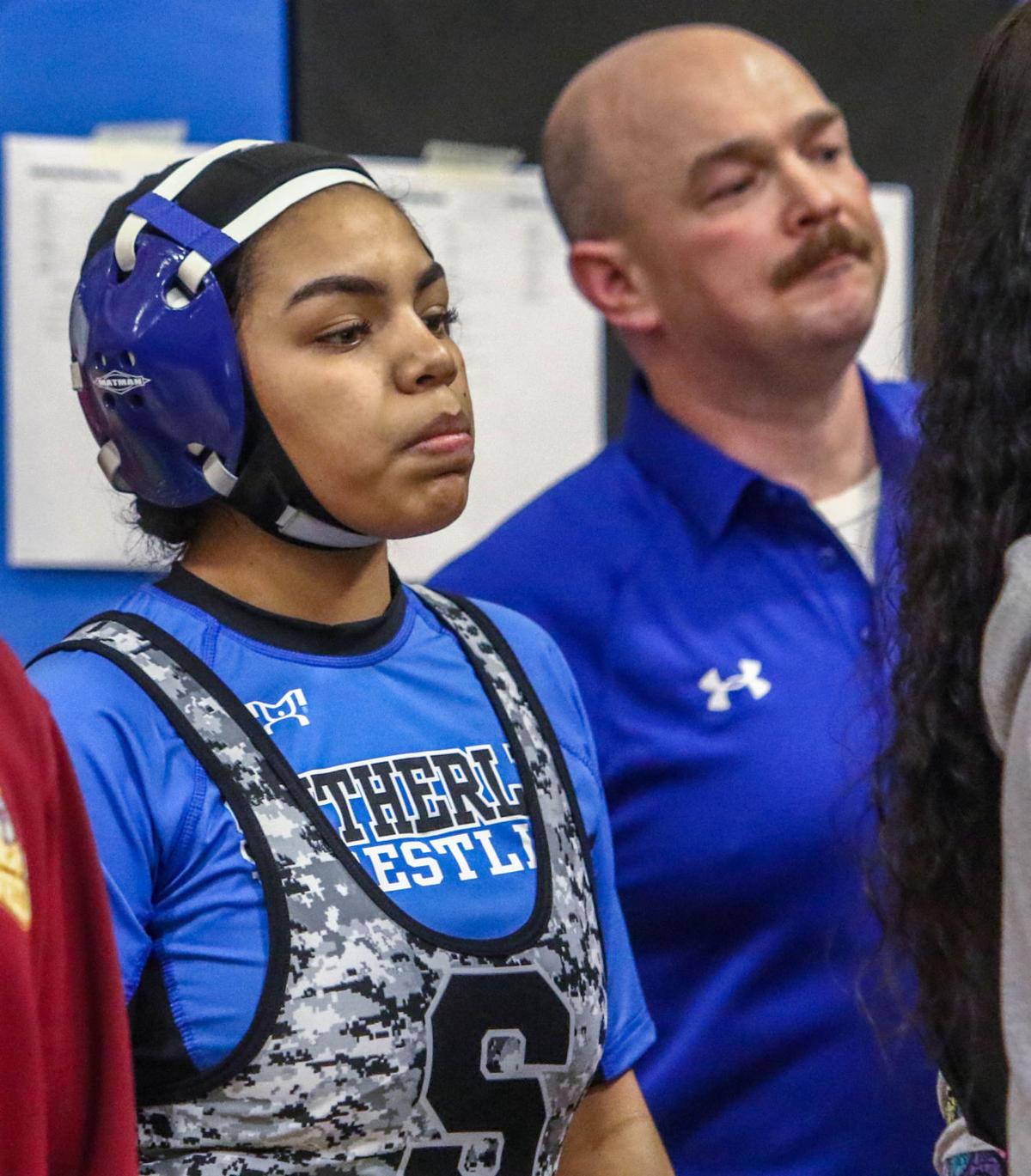 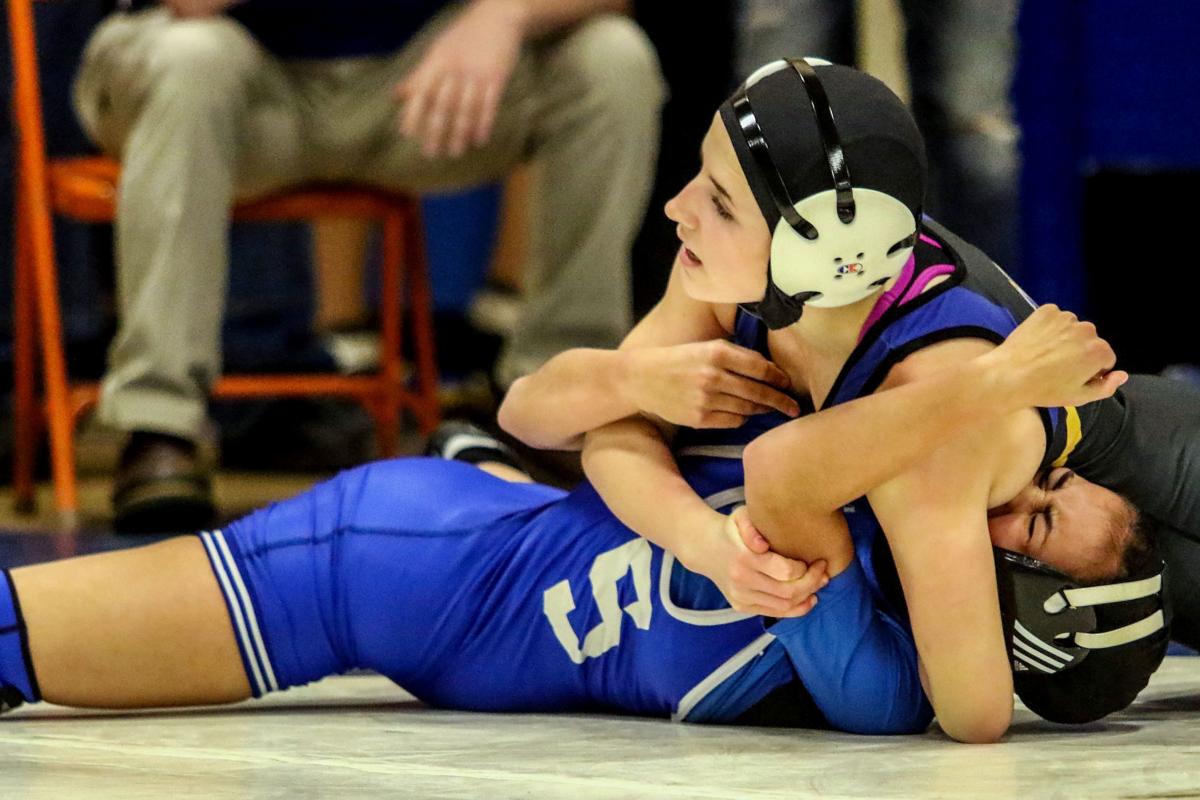 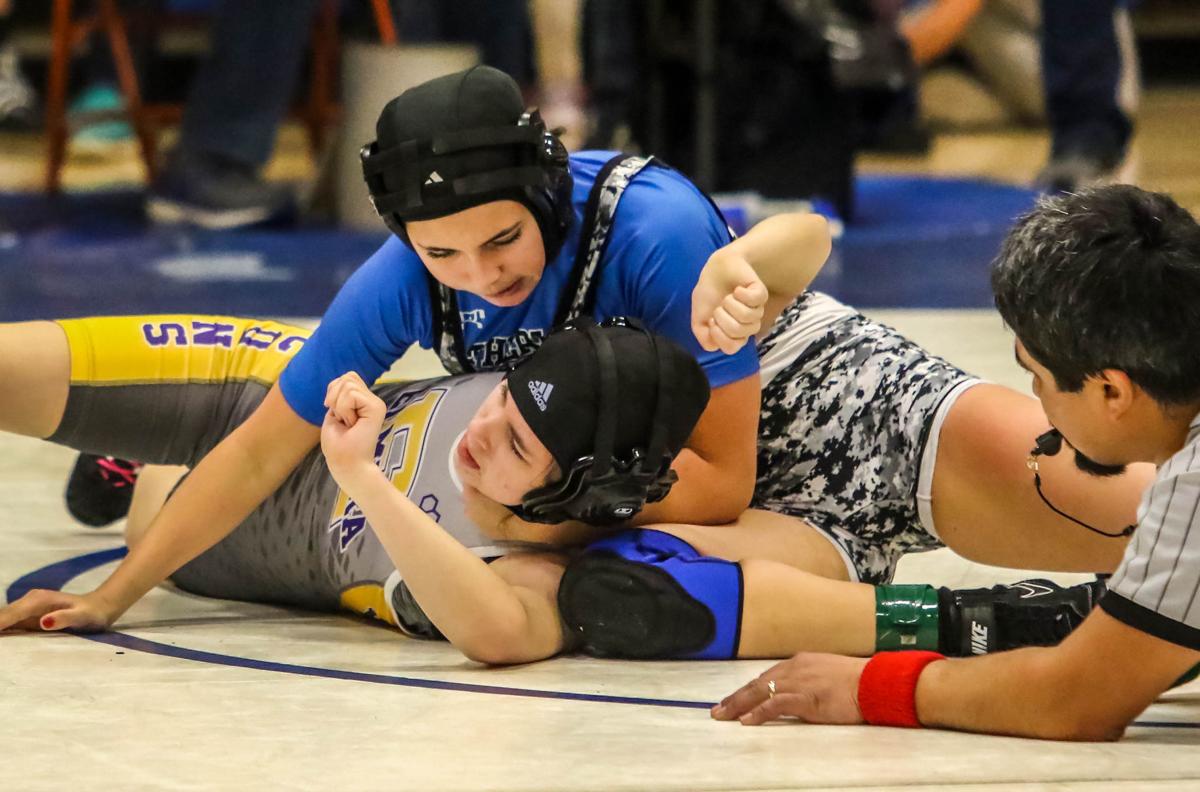 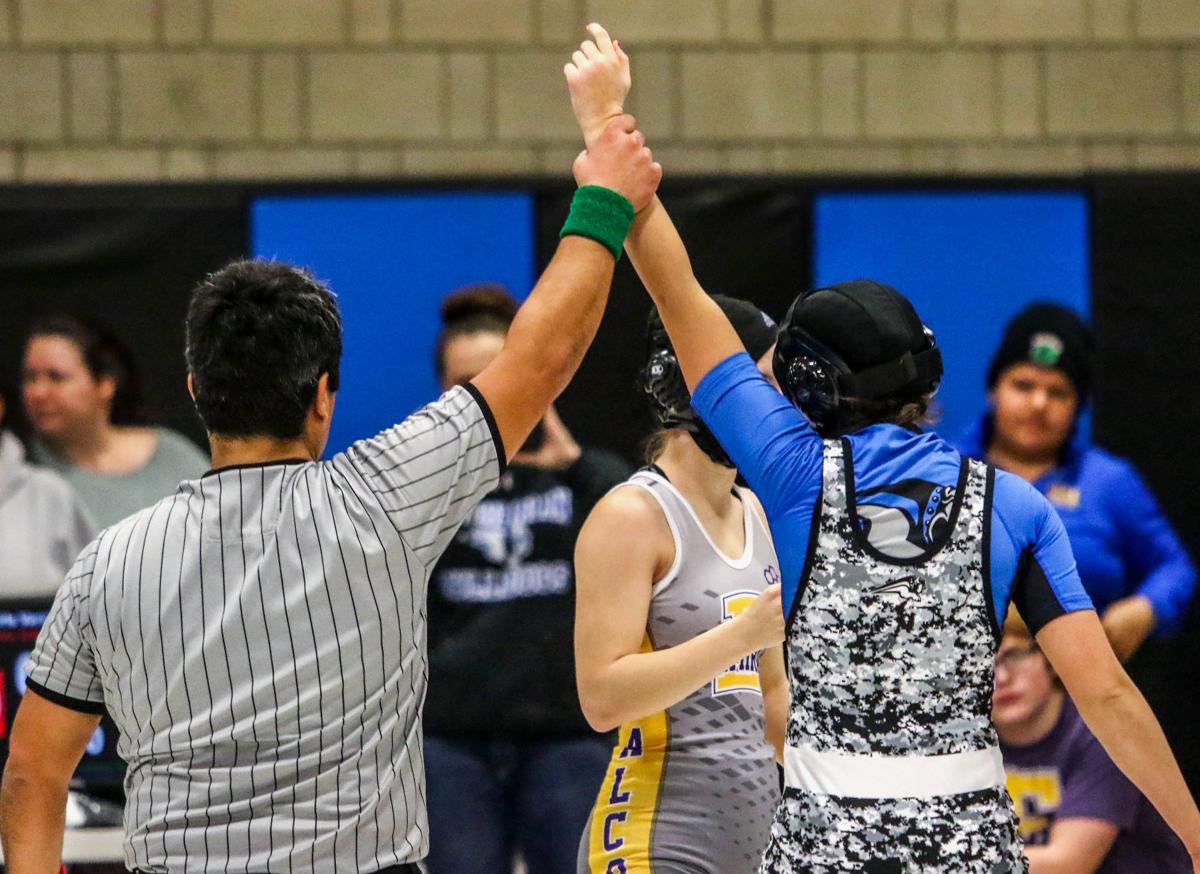 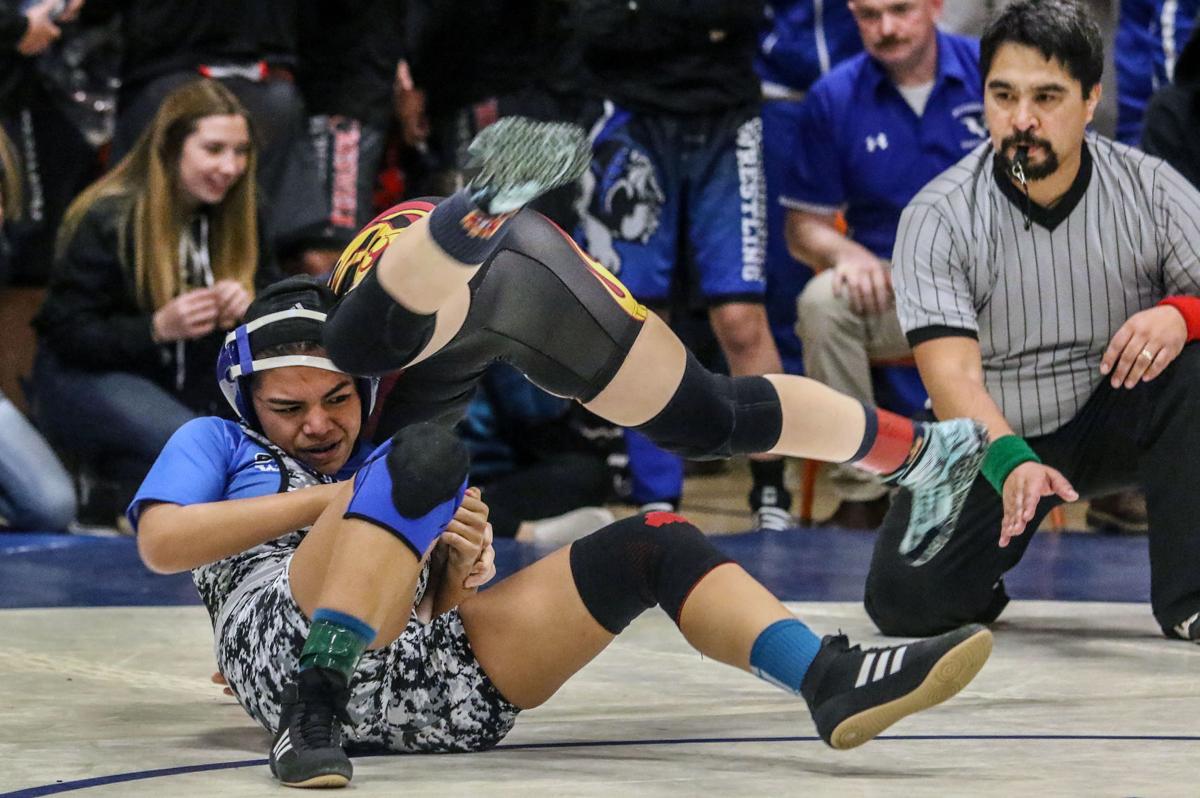 Douglas wrestler Elexis Walker prepares to pin her opponent in the first round of the Sutherlin Wrestling Classic last Saturday.

This year, Sutherlin High had eight girls join the wrestling team, a number that’s expected to grow even more in the next few years.

During its 2018 summer workshop the Oregon School Activities Association officially added a girls wrestling division at the state tournament and allowed a number of tournaments throughout the regular season to be added specifically for girls.

While there will now be separate female-only events, it will not be a separate sport. The official sport is wrestling, with a division for boys and a division for girls.

In the championship model approved by the OSAA Executive Board, girls will be able to compete against girls for a girls state title or compete in the boys’ brackets.

The girls’ state tournament will be for all classifications, 1A through 6A.

“It’s cool because now I get to wear the team singlet,” South Umpqua wrestler Samantha Stroud said. “I remember wearing a black singlet one year and I didn’t feel like I was a part of my own team.”

Stroud finished third in the girls state exhibition tournament in the 220-pound weight class last season, but is wrestling at 235 this season.

“I’d rather wrestle with the boys because they have more competition and it makes it more of a challenge,” Stroud said of practicing with the boys. “I’m just one of the guys.”

Douglas 135-pounder Elexis Walker said she started wrestling in first grade when her dad was the coach, but has enjoyed the girls-only tournament.

“Usually against the girls I do better, but I like to wrestle the boys for a challenge,” she said. “I usually don’t make it far.”

When asked how he liked having two girls on the Douglas High wrestling team, Jesse Brecht said, “We treat them like everyone else. They love the sport as much as the guys do, so why treat them differently?”

Roseburg wrestling coach Steve Lander said although there are no girls on this year’s team, there have been girls in the past and he expects there will be more in the future.

“If they come, we’re going to wrestle ‘em and if there’s enough of them we probably ought to have a coach or program for them,” Lander said. “I’m more in favor of girls wrestling girls at this point, so it’s good that it’s developing in the state and nationwide. This is good for the girls.”

Matt Barrett, an assistant coach at Sutherlin who travels with the girls to female-only events and helps them in practice, said there are some obvious differences between the two genders.

“One thing is, that girls have less upper body strength,” Barrett said. “But girls can bend in ways that most guys can’t.”

But when it comes to the basics, it’s all wrestling and learning a contact sport is not easy.

“It’s a hard sport, there’s no easy way to learn,” Barrett said. “You’re going to get beat on.”

“Walking into a room full of boys is very intimidating,” Candelaria said. “But Kyla Keen really helped us out. We were slowing her down, but she still helped us.”

Teammate Asia Carrillo (115) doesn’t mind going up against the boys in practice, but is more comfortable wrestling girls.

Under the new rules the female-only events will not count against the school team maximum. Schools are allowed to participate in 14 events, exclusive of district and state championship tournaments.

Participation in female-only events will count against the individual wrestler, who’s limited to participate in no more than five matches per day, excluding forfeits.

History shows that after girls wrestling is sanctioned at the high school level the number of athletes begins to go up.

“You need the numbers in high school, so you can fill the college rosters,” DeWeese said.

DeWeese herself was a walk-on for the University of Oregon wrestling program. She was the only woman on the team.

“Working with these girls, they don’t get it,” DeWeese said. “There were times I wanted to quit and I couldn’t because they would say girls are quitters. I wish they still valued the struggle.”

DeWeese became interested in pursuing wrestling when she was first introduced to the sport in an eighth grade advanced P.E. elective class.

“It never occurred to me it’d be an issue,” DeWeese said.

She joined the Sutherlin High team, because in 1984 Douglas County judge Donald Sanders rescinded a school policy that barred girls from playing football and other contact sport at the Sutherlin school district and knew she would be welcomed.

“The coaches were really supportive,” DeWeese said. But her mother would receive phone calls from other parents that were quite abrasive.

When she first started wrestling, DeWeese was more covered up than most of her male teammates and competitors — wearing full-length leggings and t-shirts under her singlet.

“I was trying to make it easier on them,” DeWeese said. But despite her best efforts there were still a number of boys who declined to wrestle her and forfeited.

She also lost a lawsuit in 1987, filed on her behalf by the American Civil Liberties Union, that prevented her from wrestling because of her shoulder-length hair. During the trial DeWeese said, “I want to feel like a girl and still participate in sports.”

But after a two-day hearing Douglas County circuit court judge Joan Seitz determined that the short-hair rule may stand. DeWeese cut her hair short and continued to wrestle.

During her senior year, there was another school with a girl on the wrestling roster and despite a difference in size and weight the two met in an exhibition match.

To push her female athletes harder, DeWeese occasionally allows male wrestlers to come in during practice.

But having more athletes will create better competition for female wrestlers and sanctioning girls wrestling will go a long way toward bringing more girls to the sport.

Stroud said, “Each year we’re evolving. This was a big step and we’re earning our way.”

While Stroud is the lone high school wrestler at South Umpqua, there are four girls signed up for wrestling at Coffenberry Middle School in Myrtle Creek.

Jennifer Singleton, who’s the Roseburg Mat Club secretary, a wrestling coach at Jo Lane Middle School and on the board for Roseburg High School wrestling, has seen the number of girls in the various programs increase over the seven years she’s been involved with wrestling in Roseburg.

“There’s always been some girls in mat club, but now that they have all-girl tournaments you see a tremendous amount more,” Singleton said. “When people call to get information (on RMC), I let them know now that there are all-girls tournaments.”

She noted that there are four or five girls wrestling at the middle school level who will likely try to compete at Roseburg High School once they’re old enough.

“With this becoming a more popular sport for ladies in the state, we will see an increase in participation as we have seen a rise of more girls participating in Roseburg Mat Club,” RHS athletic director Russ Bolin said. “Hopefully, those young ladies will stay with it as they get older.”

For DeWeese, wrestling has taught her perseverance, self-confidence and determination.

“Wrestling completely shaped who I am,” DeWeese said. “By the time I was on the national and world team I liked wrestling girls, but there’s a real benefit to training in a room with guys. But I think women’s wrestling can be as tough as men’s wrestling.”

She competed in the first U.S. Women’s wrestling tournament and was on the first women’s team sent to the world championships. She is on the USA Wrestling All-World Team and a silver medalist in the 1989 World Championship in Switzerland.

DeWeese said, “It’s great to see the growth. I get tingles just seeing how far we’ve come in my lifetime.”

This article contains INACCURATE information. Girls wrestling is NOT a sanctioned sport. Girls now have a division at the state tournament.

Girls have an OSAA SANCTIONED state tournament as well as other SANCTIONED tournaments throughout the season, which are separate from the boys and do not go toward team totals. Something they didn't have last year. OSAA is definitely sanctioning parts of the competition, but waiting to fully make it a sport until the numbers justify this.
Like the story says there is no "girls wrestling" just as there is no "boys wrestling", there's just wrestling. But now the girls have the opportunity to compete for girls titles that are OSAA SANCTIONED.

They did not sanction the state tournament. No changes were made there. It is already a "sanctioned" tournament. They created another division. (Girls). Wrestling is a COED sport. Call the OSAA and ask them. Brad Garrett 503-682-6722