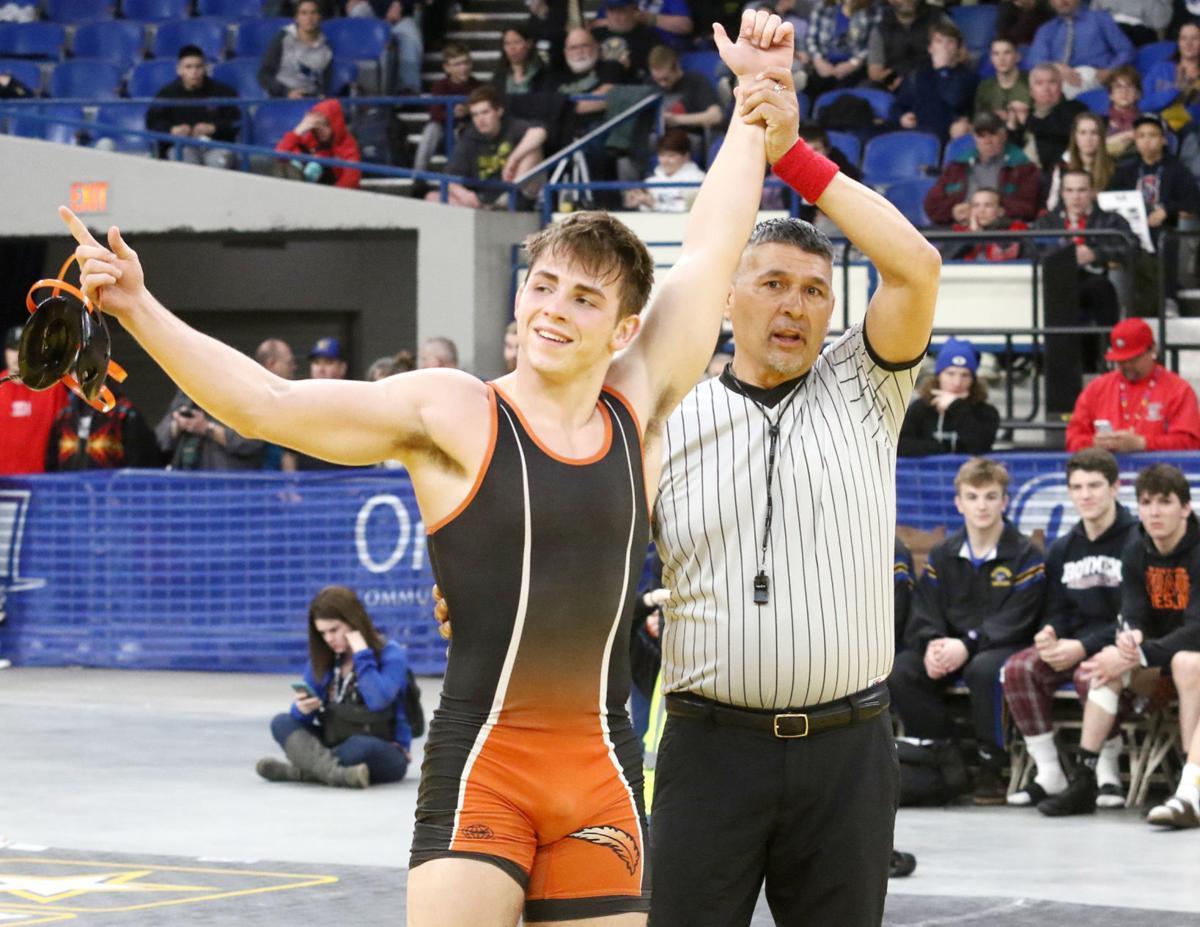 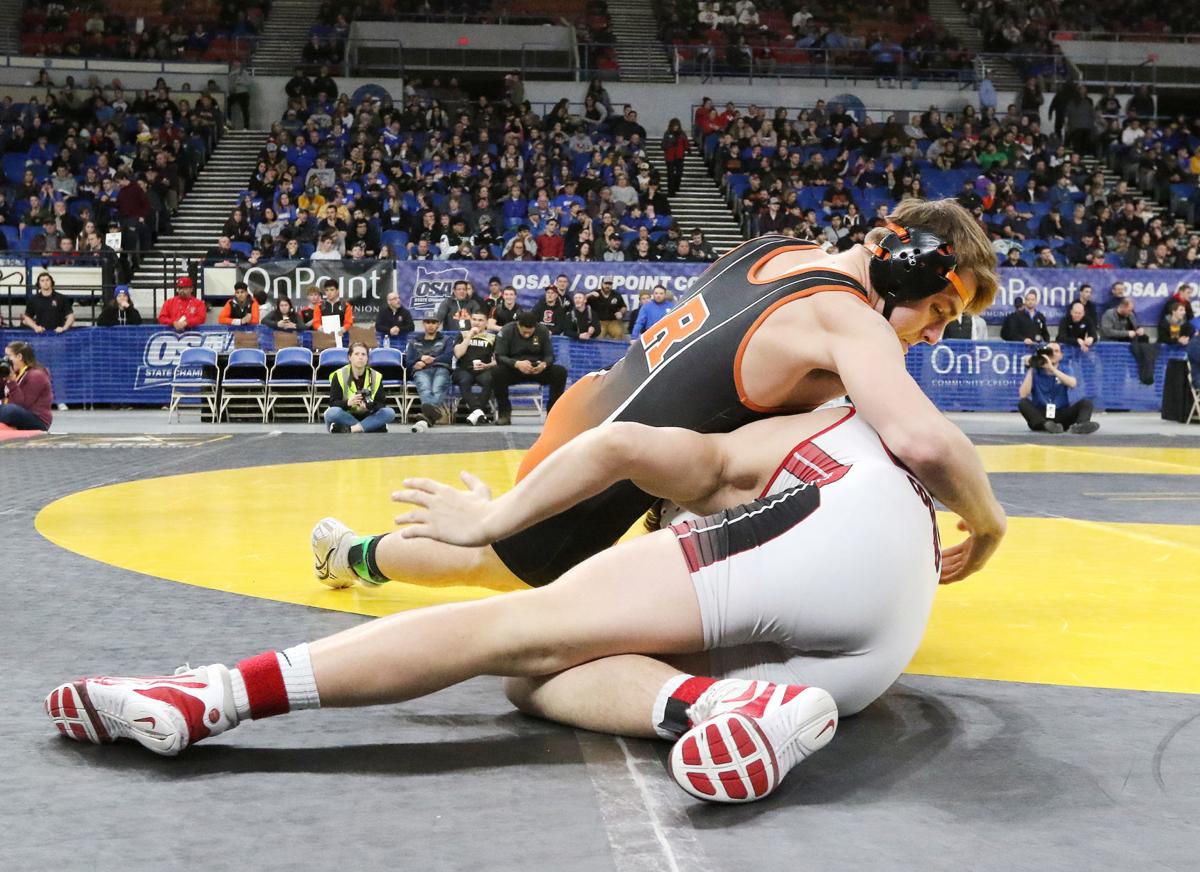 Roseburg's Darian Thacker stays atop Mountain View’s Cannon Potts in the 6A 170-pound final at the state wrestling tournament Saturday in Portland. 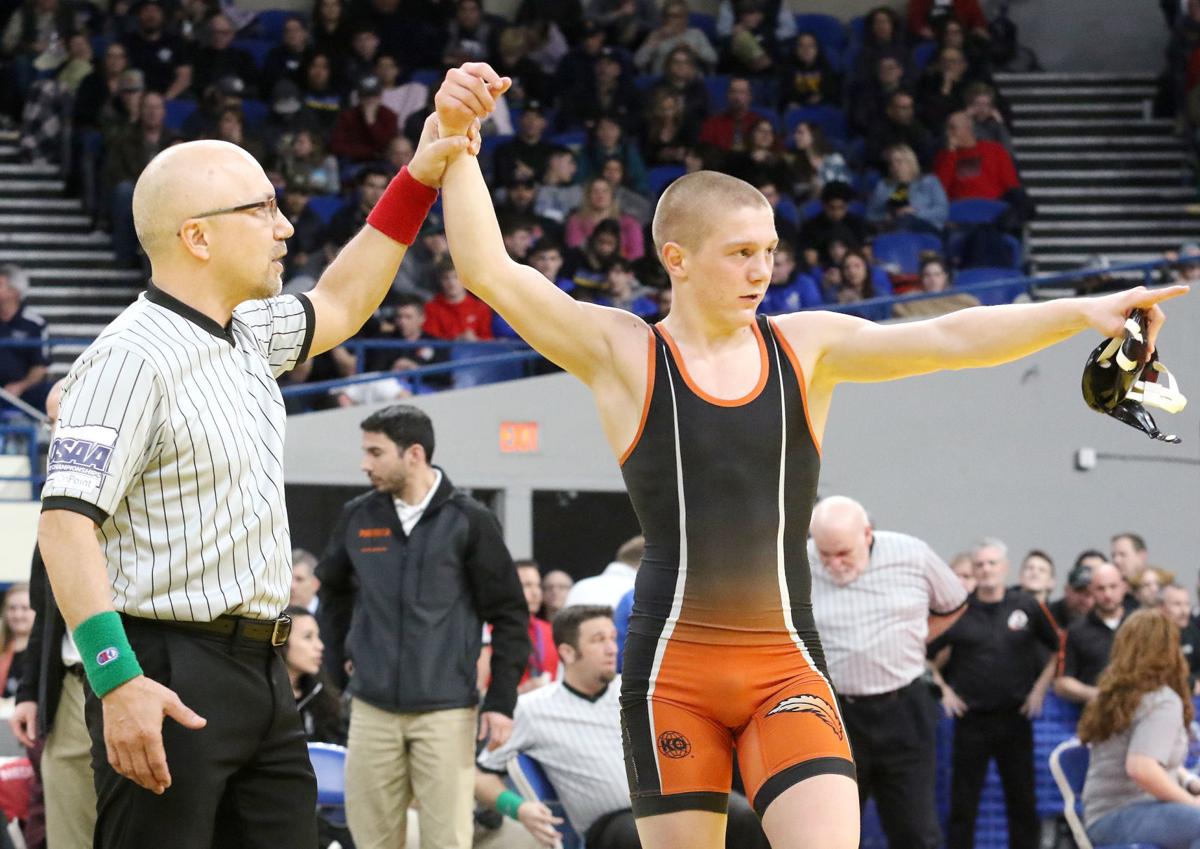 Roseburg High School’s Nash Singleton celebrates his victory over Sprague’s Noah Worthington in the 6A 120-pound final at the state wrestling tournament Saturday in Portland. 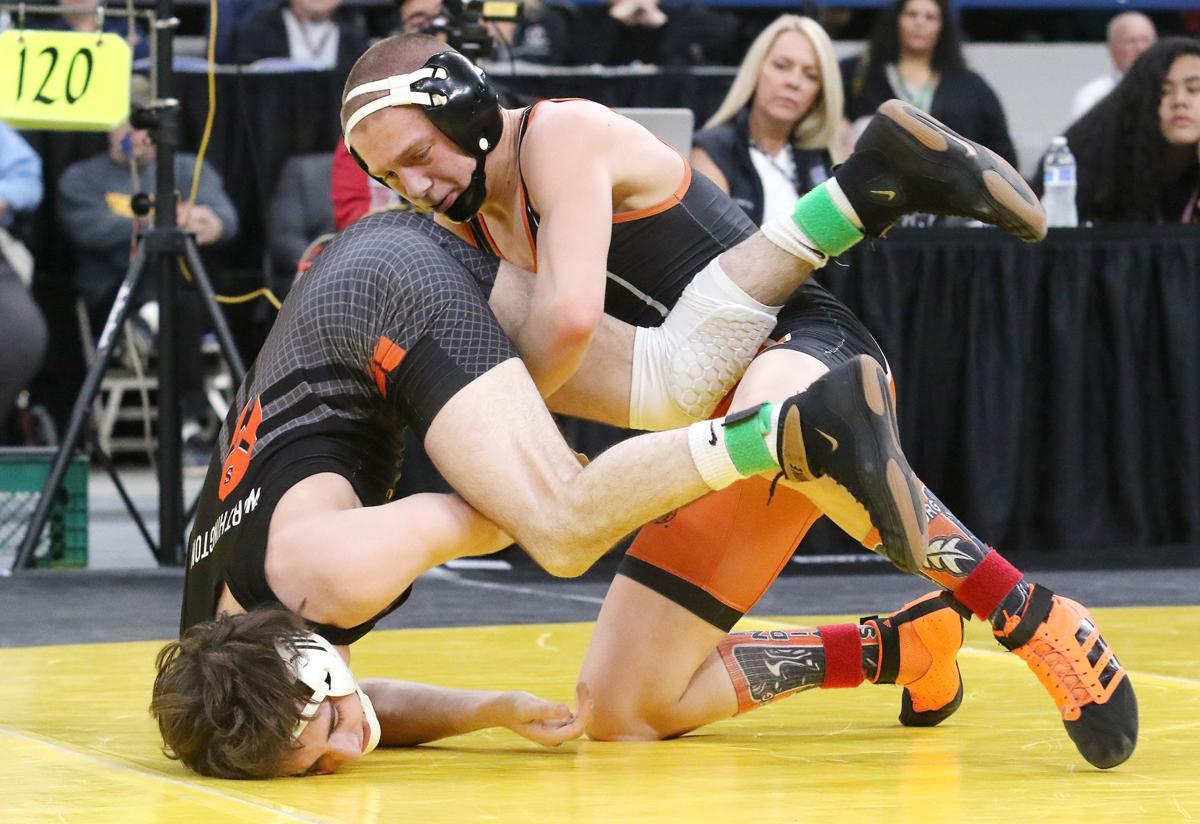 Roseburg's Darian Thacker stays atop Mountain View’s Cannon Potts in the 6A 170-pound final at the state wrestling tournament Saturday in Portland.

Roseburg High School’s Nash Singleton celebrates his victory over Sprague’s Noah Worthington in the 6A 120-pound final at the state wrestling tournament Saturday in Portland.

The Indians placed second in the team standings behind Newberg, which had clinched the title earlier Saturday afternoon in the placement rounds. It marked the Tigers’ first state crown since 2009.

Singleton, the No. 3 seed at 120 pounds, got the quick jump on top-seeded Noah Worthington of Sprague, getting a takedown and three near-fall points for a 5-0 lead after the first round.

That was all the cushion he needed to beat Worthington 10-3 and earn his first state championship.

“I wanted to pin the guy, but it still feels good,” said Singleton, who received a medical forfeit in the semifinals when Newberg’s Nicky Olmstead, the No. 2 seed, was too ill to wrestle.

“The bye actually made it worse because I didn’t get a match this morning, so I had to spend all day worrying about this one,” he said.

Did winning his first title take away from the disappointment of Roseburg not meeting its team goal?

Thacker, the No. 1 seed at 170 pounds, scored a 7-2 decision over Mountain View’s Cannon Potts as the junior claimed his first state championship.

“I can’t describe it,” Thacker said. “It’s absolutely amazing, especially to do it around people who love me.”

Kahleb Diaz was overpowered by top seed and defending state champion Ayden Garver of Newberg in the 126-pound final. After taking a 2-1 lead after the first round, Diaz found himself fighting from his back for most of the second as Garver, a sophomore, scored six near-fall points to take the lead for good in a 10-4 win.

Tristin David found himself locked in a chess match West Linn’s Cael Brunson in the 152-pound final. Tied 0-0 after the first period, David started from the down position and got a quick escape, and Brunson answered in similar fashion early in the third for a 1-1 match.

Brunson took David down with 20 seconds remaining, David got a quick escape, time ran out, and Brunson walked away with a 3-2 victory.

Lucky state championship No. 13 simply wasn’t in the cards for the Indians, as Newberg mathematically locked up the championship during the consolation placement rounds.

“Newberg is very good and they wrestled well. I’m happy for them and coach Russo,” Roseburg coach Steve Lander said.

In the fifth-place matches, Archer Bergeron (145) and Colin Rietmann (160) both scored major decision victories to place fifth for the second straight year. Tyler Estes (220) won a 10-5 decision to also earn a fifth-place medal.

Cameron Cross (113) placed sixth after dropping a 4-2 decision to Cleveland’s Elija Fishler. Rourke Martin (182) suffered a heartbreaking 8-7 loss in Saturday morning’s consolation round, falling one victory shy of a medal.

“We knew we had to be real good, and we let a couple of matches get away from us that could have put a little pressure on (Newberg),” Lander said. “But you have to get the first takedown and we didn’t do that often enough. You’re wrestling lots of very good kids, and they want to win as well.”