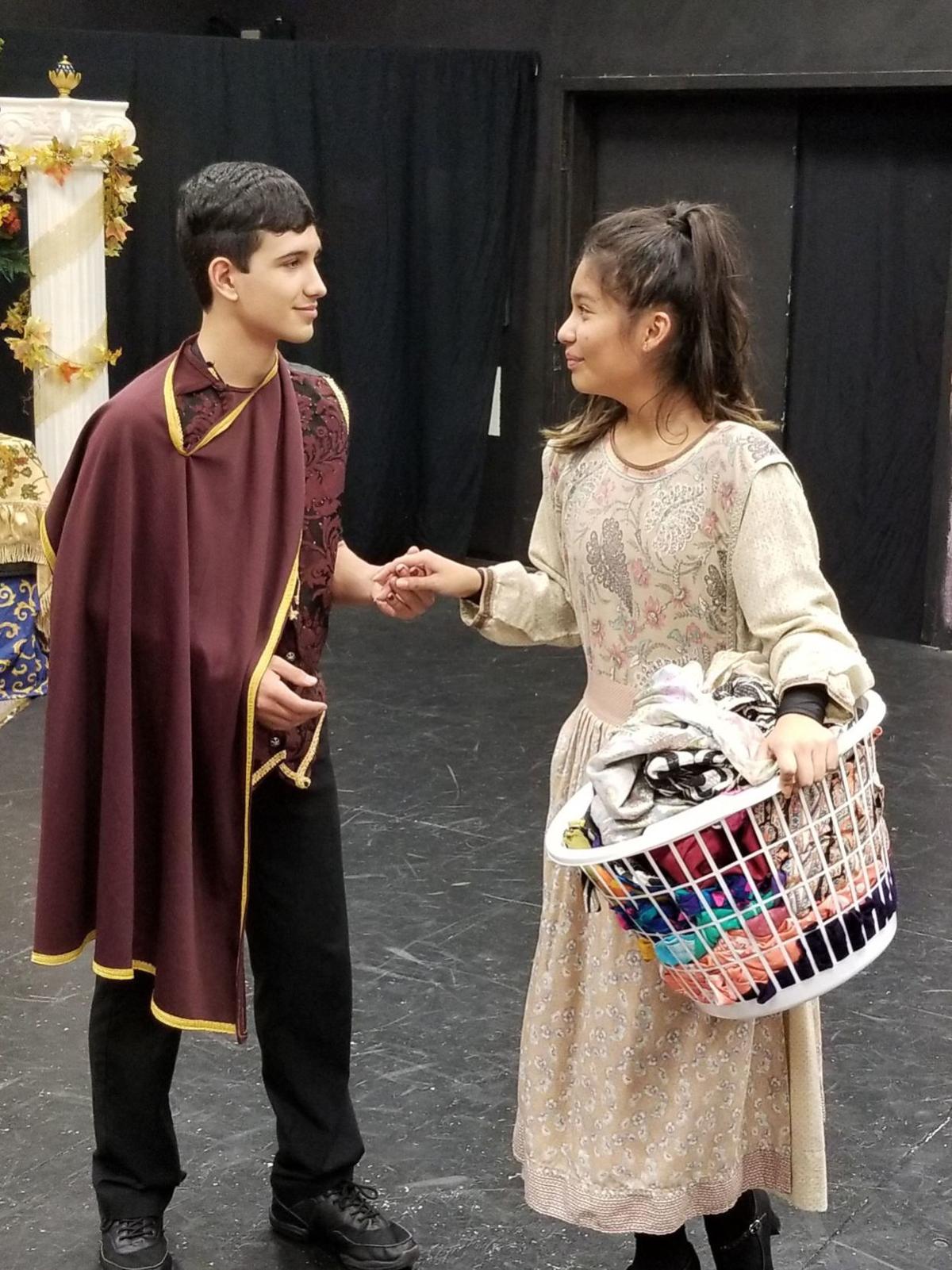 Junior Abigail Morningstar and freshman Anthony Pezqueda perform during a rehearsal of ‘A Hollywood Fairytale’ on Tuesday at Glendale High School. From left, Cali Smith, Chloe Young and Maryjane Martin perform during a rehearsal of A Hollywood Fairytale Tuesday at Glendale High School. 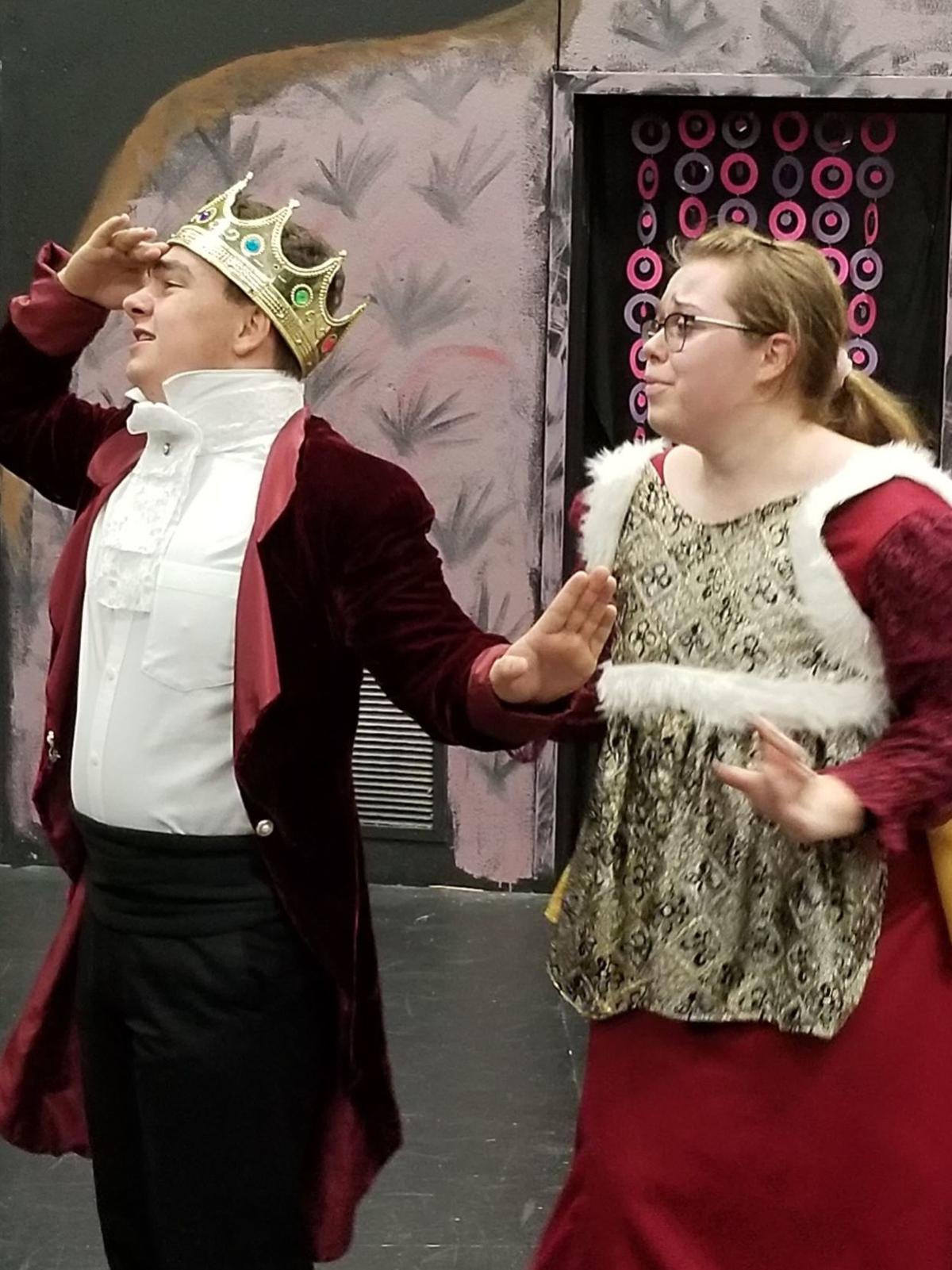 Tarren Pirrello and Destiny Kleine perform as King and Queen during a rehearsal of A Hollywood Fairytale Tuesday at Glendale High School. 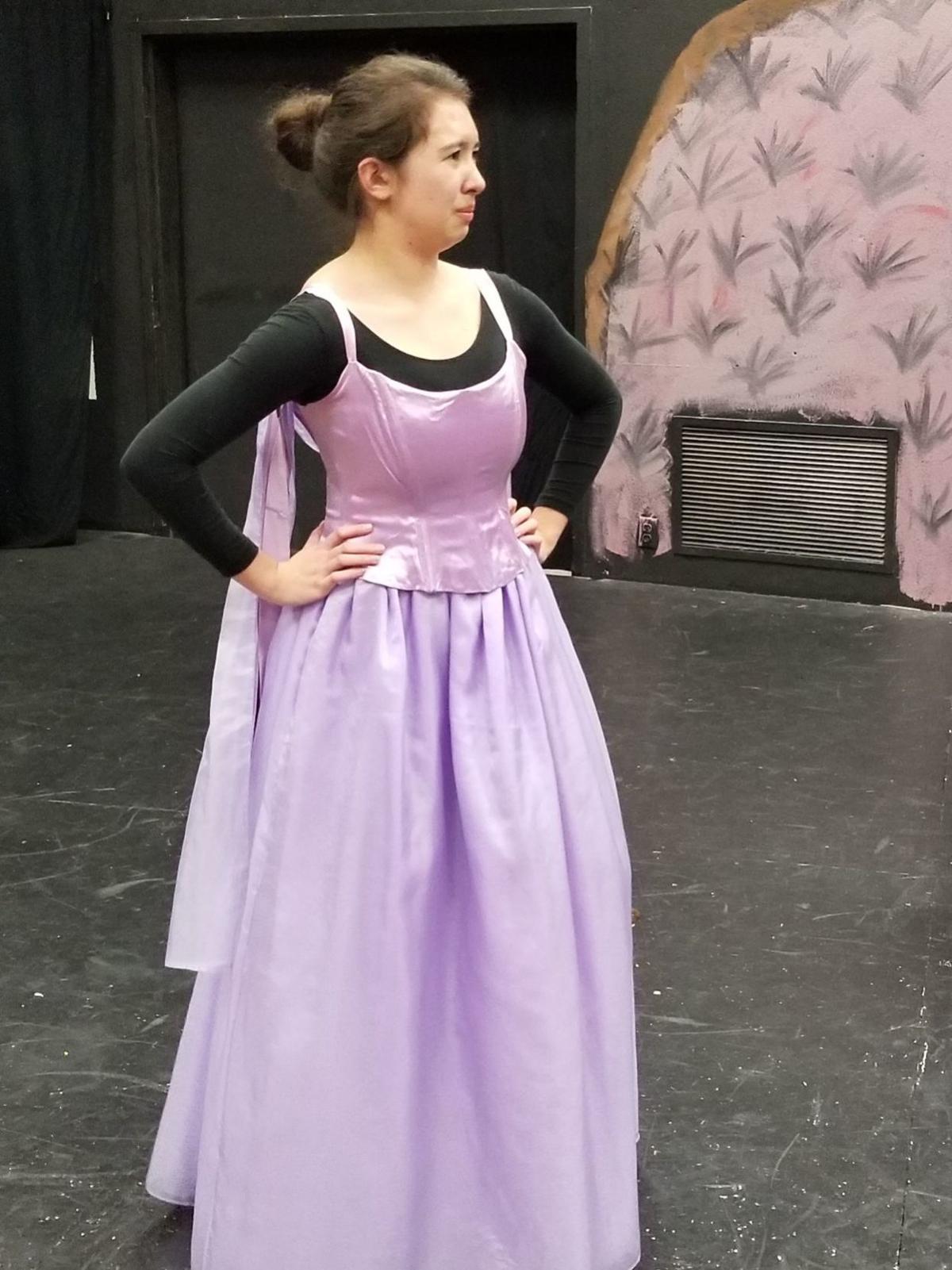 Alyssa Unruh performs as Lady Diana during a rehearsal of A Hollywood Fairytale Tuesday at Glendale High School. 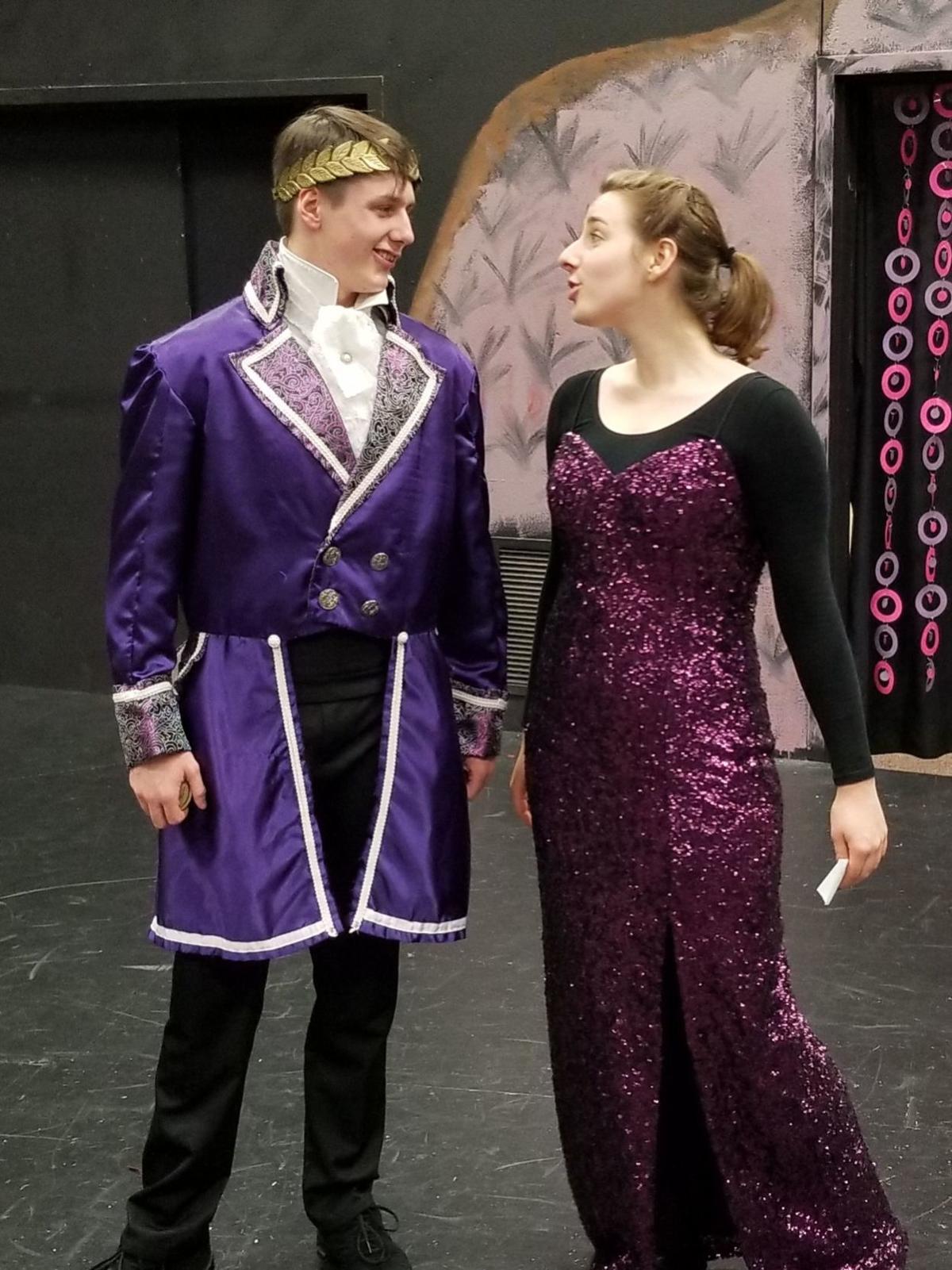 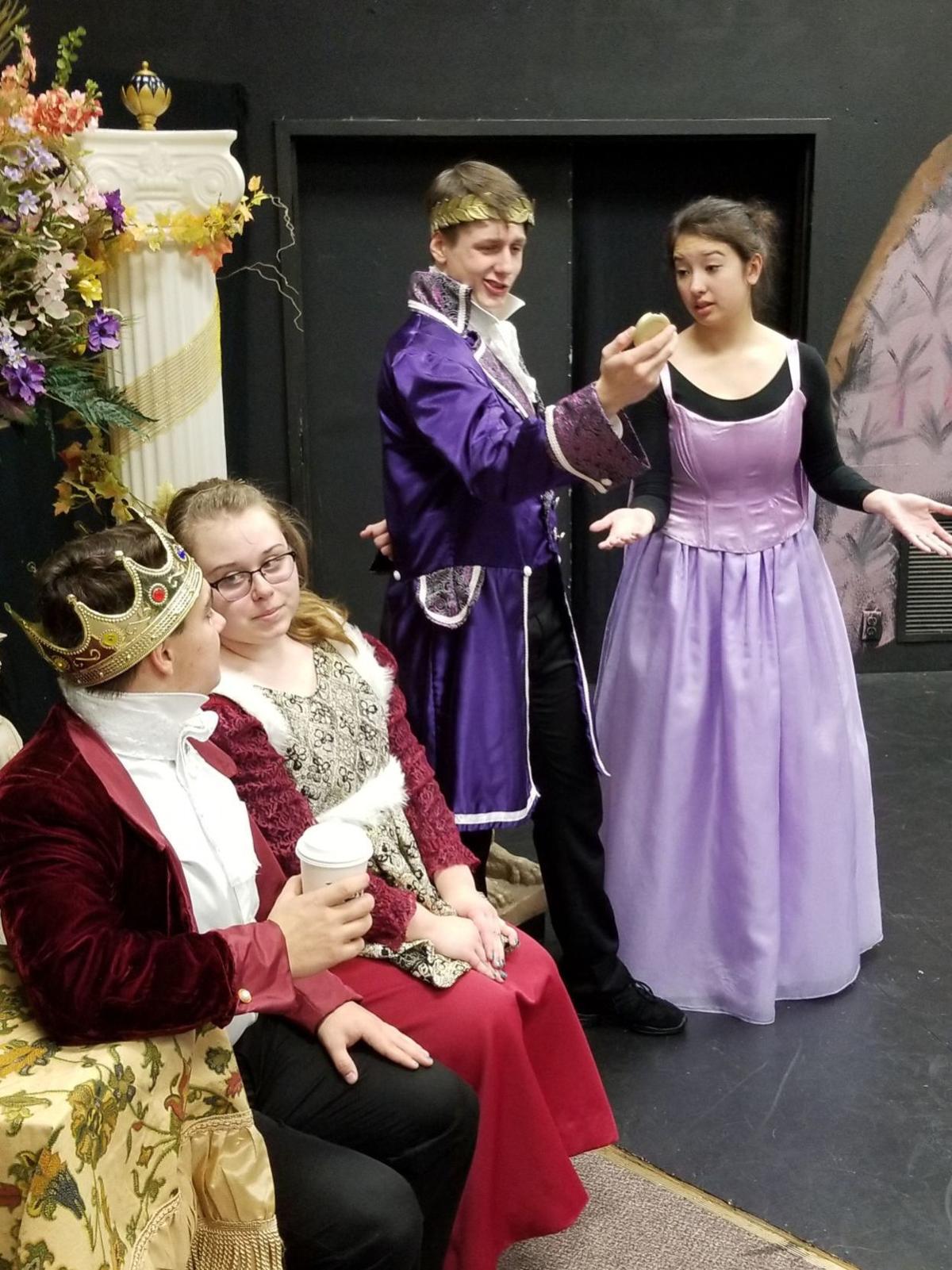 Junior Abigail Morningstar and freshman Anthony Pezqueda perform during a rehearsal of ‘A Hollywood Fairytale’ on Tuesday at Glendale High School.

From left, Cali Smith, Chloe Young and Maryjane Martin perform during a rehearsal of A Hollywood Fairytale Tuesday at Glendale High School.

Tarren Pirrello and Destiny Kleine perform as King and Queen during a rehearsal of A Hollywood Fairytale Tuesday at Glendale High School.

Alyssa Unruh performs as Lady Diana during a rehearsal of A Hollywood Fairytale Tuesday at Glendale High School.

GLENDALE — Five years ago, Glendale High School didn’t have a drama program. Now, 14 students are ready to wow audiences with their spunky musical “A Hollywood Fairytale” Thursday, Friday and Saturday.

According to director, teacher and playwright Mary Huls, the play follows a group of Hollywood film actors on strike that have decided they are such talented actors, they will take to the stage.

“We have a lot of new members this year and everyone gets to be a character, which is different from a play where you have to have your straight leads. In this case, everyone gets to be a ridiculous character, which is a lot of fun for new people and it also teaches everyone how to grow. Rather than do something serious, this is about getting out there, being present and getting used to being loud and proud about what you do on stage,” Huls said.

At its core, the play is a mix of comedy and romance. Three love stories are told throughout the performance, allowing the audience to see the spark of instant love, the slow development of a couple realizing they are in love and the bickering but loving married couple.

“It’s centered around affection and how love can grow in different ways,” Angie Flores said.

Two months of practice has worked out most of the kinks, but being a relatively new program in such a small town has added elements of difficulty that other high school actors may not have to contend with.

“We have never had music class here, so vocals and timing are things we struggle with,” Abigail Morningstar said.

“The last time Glendale had music was when the 12th graders first started school,” Maryjane Martin said. “It was our kindergarten year that it got taken away.”

After each show, Huls gives the students a list of things they can improve on, not because they are not good but because she wants them to know there is always room for improvement and room to grow.

“There is always time to improve; you are not perfect,” Martin said.

Less than two dozen students make up the drama club at Glendale, but each has joined for their own reasons. Whatever those reasons, it is the sense of camaraderie and family that keeps them together.

“I enjoy the teamwork and the general atmosphere of friendliness,” senior Emmanuel Kasson said. “I have a hard time finding an atmosphere like this in other classrooms.”

Tarren Pirrello said he feels being a part of drama gives him a sense of importance in a dying community.

Freshman Anthony Pezqueda is a multisport athlete that joined drama for the stress relief.

“I’m always competing with everyone trying to be the best out of everyone but here I feel I can just relax and experience teamwork that we don’t usually have on a sports team because everyone is trying to be better than each other,” Pezqueda said. “Here, the people are so nice. I love to be around this group of people.”

The play is a mix of fantasy characters and music ranging across eras that the cast hopes draws people in.

“Being raised in this community, it completely shocked me when (Huls) first came here and she brought what she did,” Martin said. “The first time she brought a number to our class, it blew me away and then she told us to get up there and to the same thing. ... After the first number, I just couldn’t get enough. I wanted to be up here and it’s something I can give back to other people and it makes them feel the same way I did. If I can inspire one person just as much as she inspires me, it would make my day.”

Doors will open at 6:30 p.m., and the production will begin at 7 p.m. on Thursday, Friday and Saturday. Tickets are $5 for adults and $3 for kids 12 and under. On Friday, students receive free admission with a student ID card.

“I hope (the audience sees) they have a lot of wonderful kids in their community that are artistic. I hope they not only appreciate their efforts and applaud them, but encourage them to stretch and grow,” Huls said. “I hope the students know they are valued and they are loved, by their families, their communities, each other and me.”