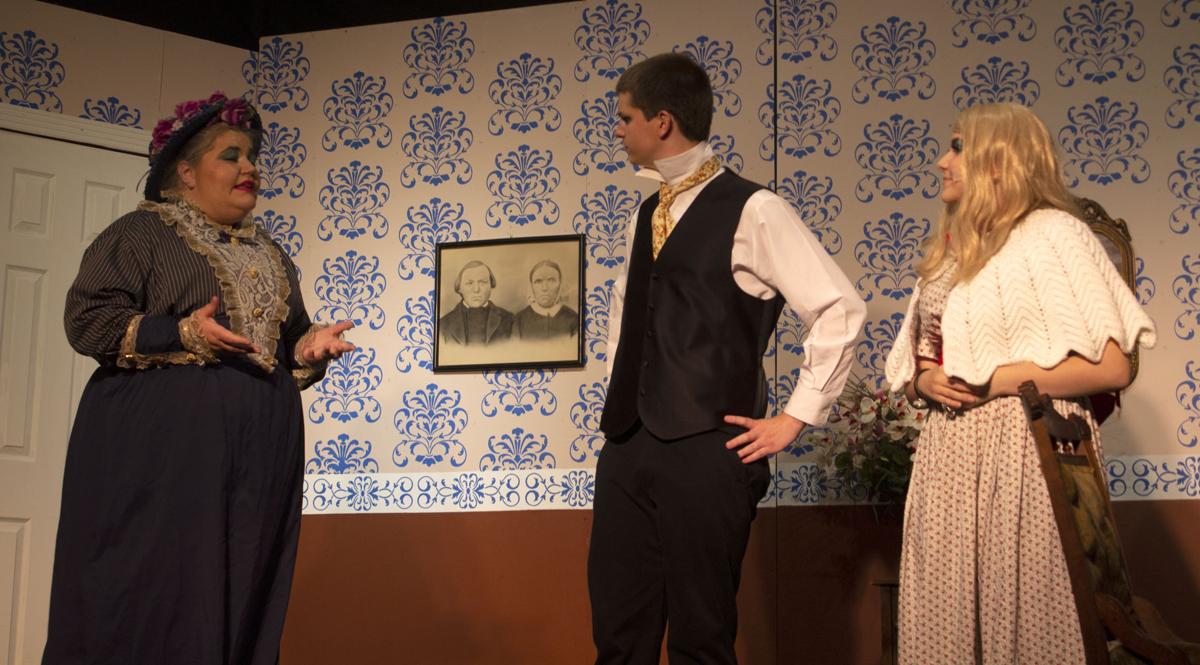 Leighila Rose, Lucas Van Dermark and Tamara Miranda in a scene from “Madness, Murder and Matrimony,” which opens Friday. 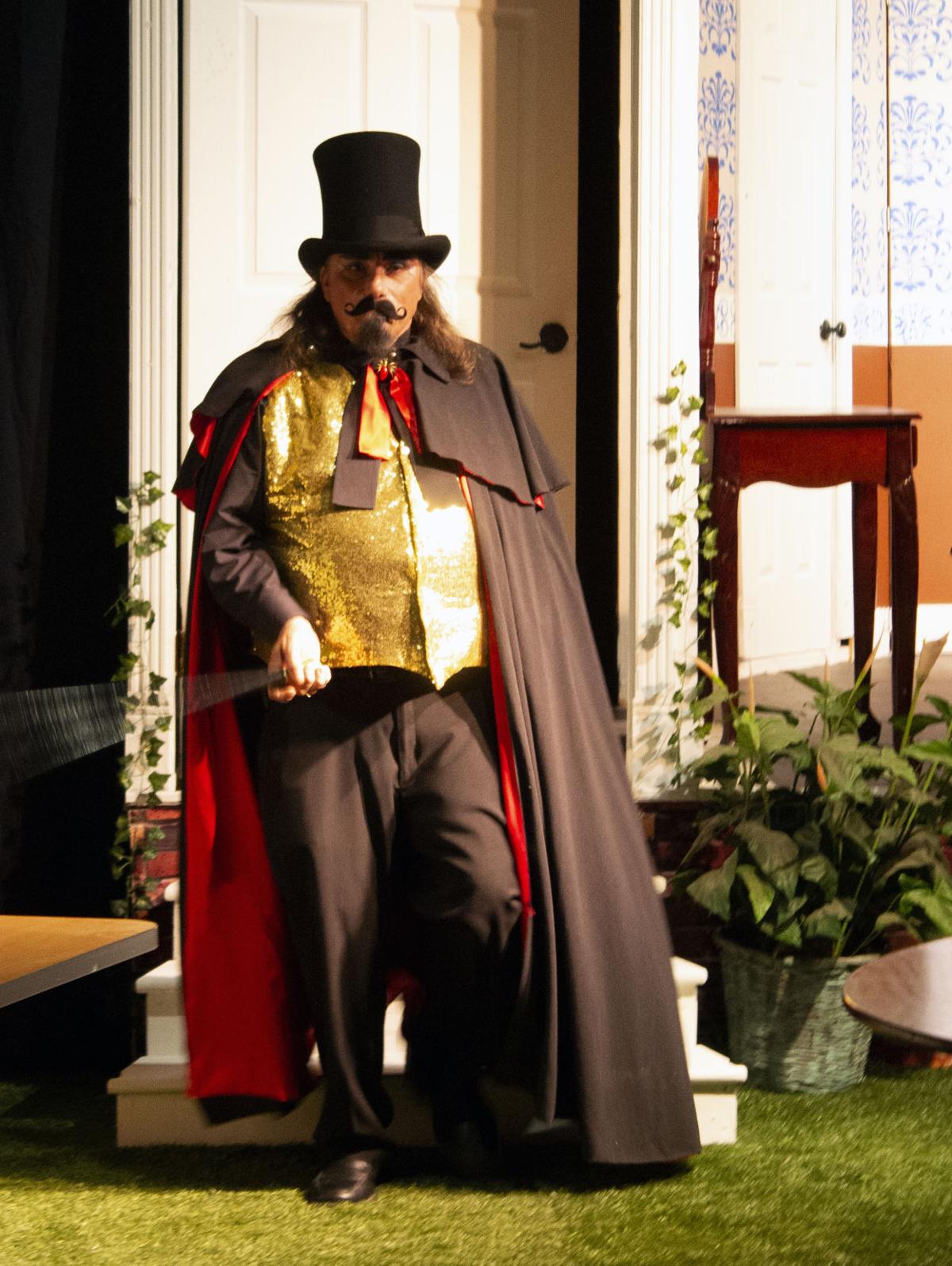 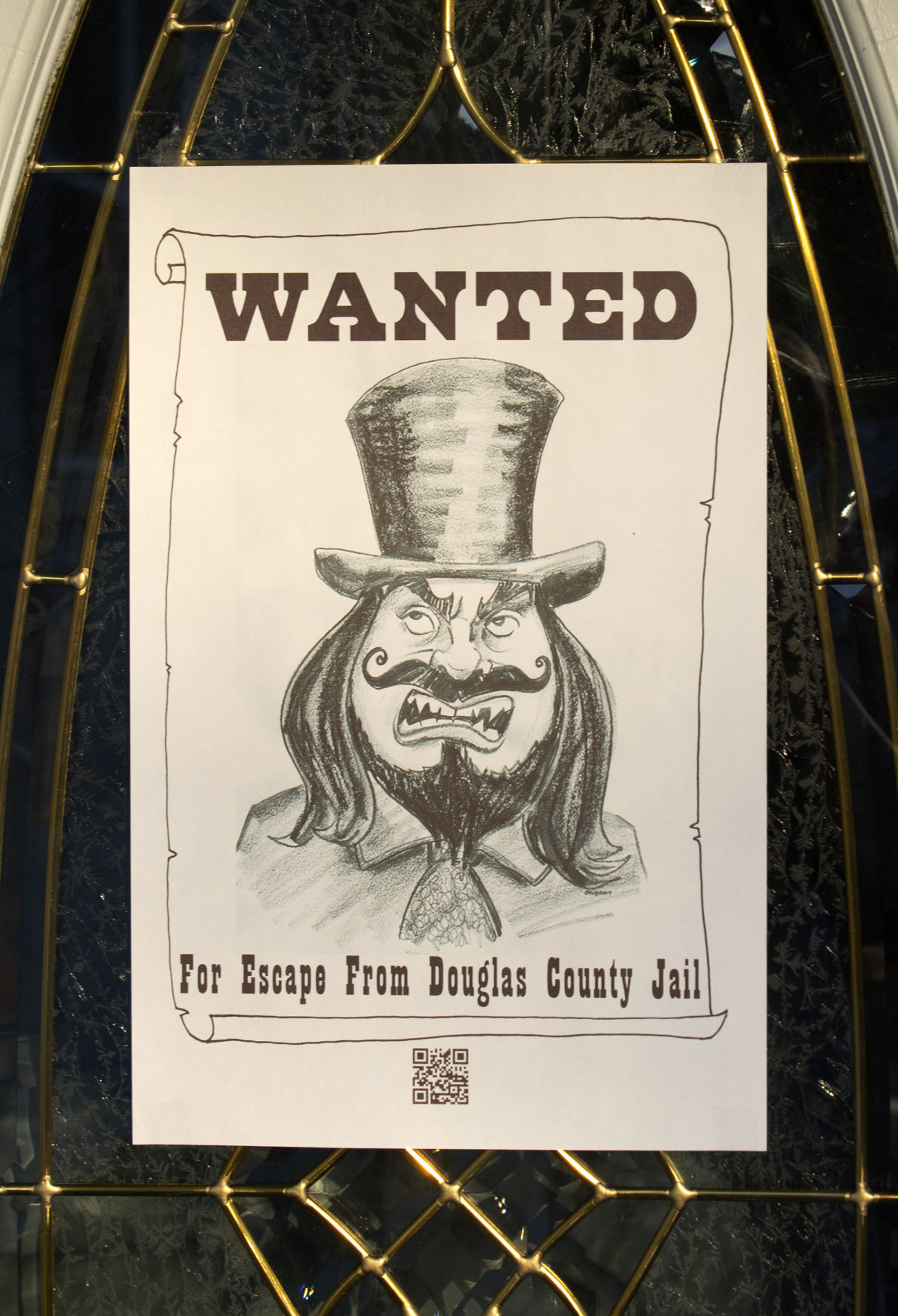 Wanted posters are hung up around the Grand Victorian Theatre in Myrtle Creek for their latest show ‘Madness, Murder & Matrimony -or- Have Some Madeira, M’Dear?’ 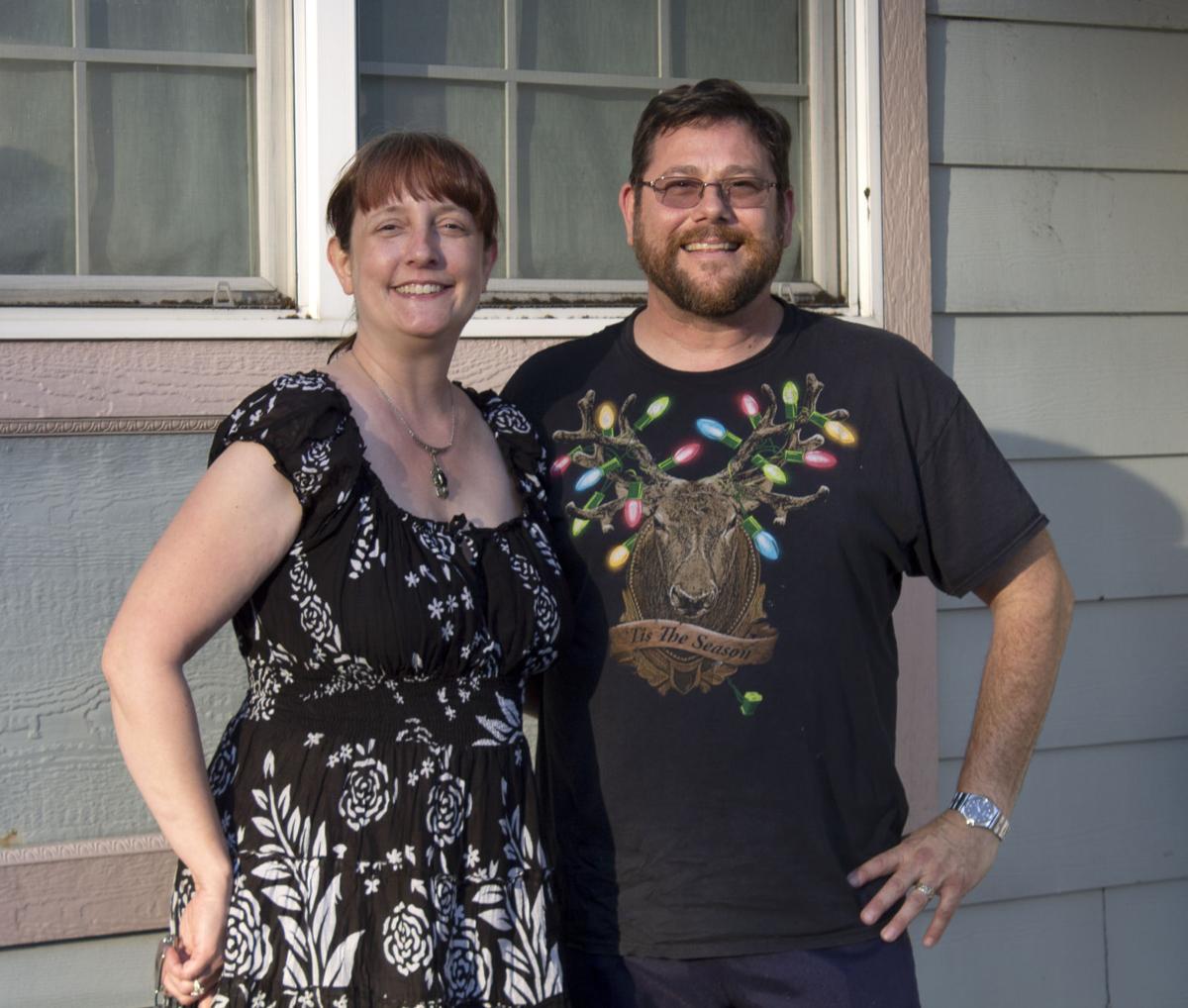 Joanne and Marcus Ogle, owners of the Grand Victorian Theatre at Myrtle Creek, are getting ready for their latest production “Madness, Murder & Matrimony -or- Have Some Madeira, M’Dear?” which will take place throughout the summer. Joanne Ogle will be the director with a minor part, while Marcus Ogle portrays Gen. George Armstrong Custer. 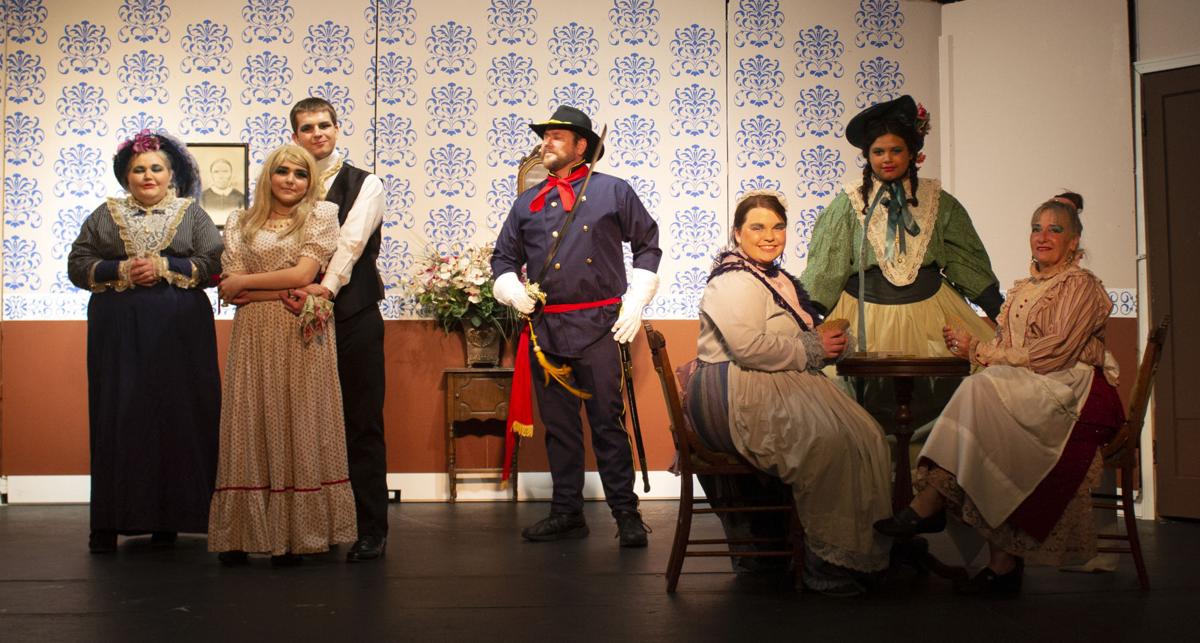 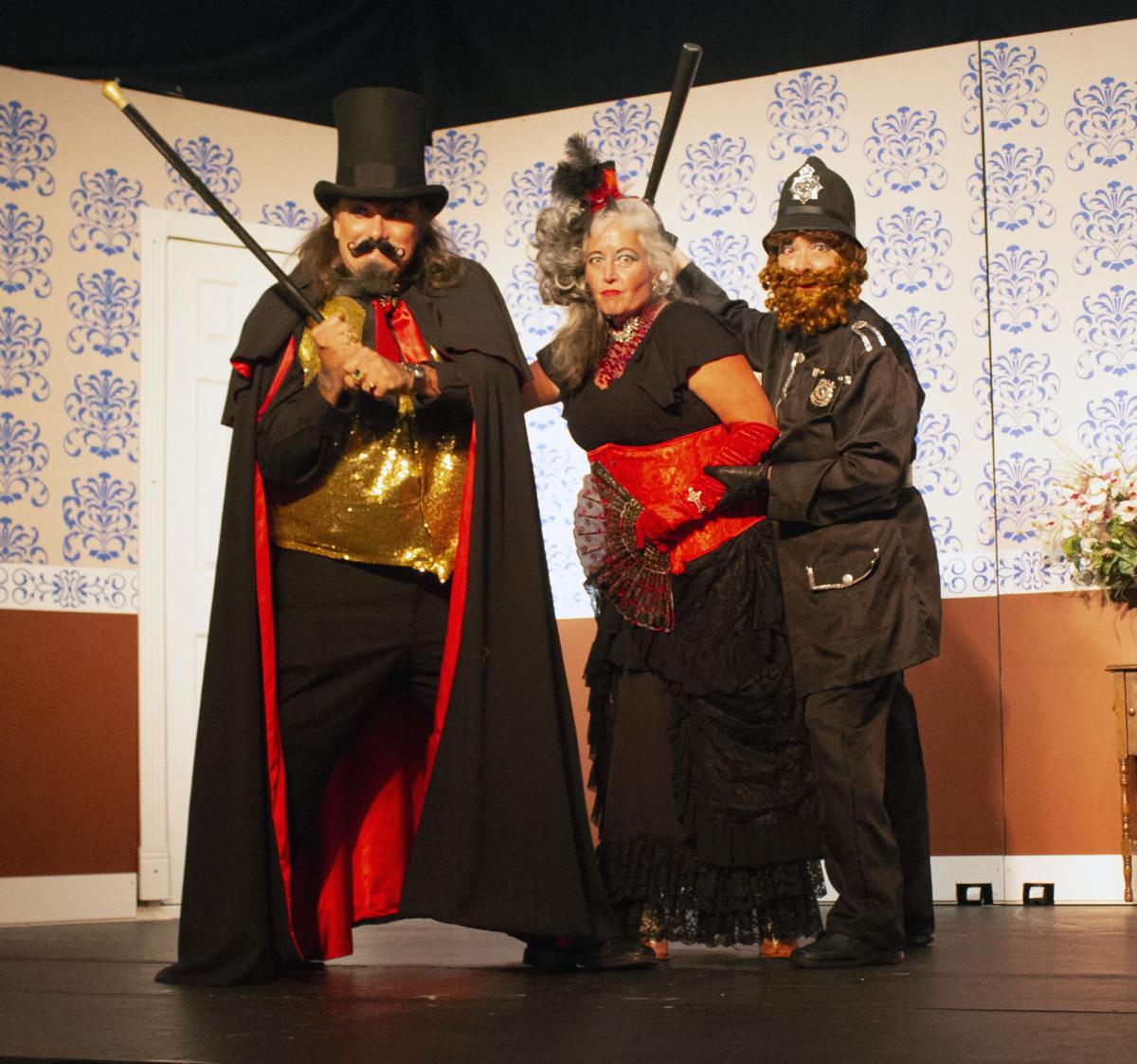 Leighila Rose, Lucas Van Dermark and Tamara Miranda in a scene from “Madness, Murder and Matrimony,” which opens Friday.

Wanted posters are hung up around the Grand Victorian Theatre in Myrtle Creek for their latest show ‘Madness, Murder & Matrimony -or- Have Some Madeira, M’Dear?’

Joanne and Marcus Ogle, owners of the Grand Victorian Theatre at Myrtle Creek, are getting ready for their latest production “Madness, Murder & Matrimony -or- Have Some Madeira, M’Dear?” which will take place throughout the summer. Joanne Ogle will be the director with a minor part, while Marcus Ogle portrays Gen. George Armstrong Custer.

Acting newcomer Bonnie Selzler has invited her husband, twin sister, children, grandchildren and other extended family to watch as she takes to the stage for the first time since the 1980s.

Only, her family won’t know which of the characters in the Grand Victorian Theatre’s summer production Selzler will be portraying.

“It’s a secret. No one is going to know it’s me. I’ve invited my whole family but I didn’t tell them who my character was,” Selzler said. “I’ve been a housewife for 35 years, but I thought I would give it a try and I really enjoy it. It’s a lot of fun. I’ve never done anything like this before and I really love my character. I get to be someone else.”

Selzler is one of many new face guests will see as part of “Madness, Murder & Matrimony -or- Have Some Madeira, M’Dear?” the comedic melodrama the Myrtle Creek theater will host for seven weekends throughout the summer. The play combines elemwents of a musical, romance and comedy for 14 shows, the most the theatre has ever ran for one show since the Ogles purchased it .

That’s because owners Joanne and Marcus Ogle want to try something a little different. This will be their first show since almost losing everything two years ago. In that time, Marcus Ogle has dedicated himself to the study of running not only a business, but a restaurant.

“Did it a little differently this time. And a little the same,” he said. “I spent a year doing janitorial at the casino, then a year doing beverages and slots there and now I am a short order cook at Elmer’s. I’ve been sampling everything we need to see how they have been doing it in the professional world and bring it here.”

They will put this knowledge to good use beginning Friday, the play’s opening night. The production follows hero Fielding Fletcher (Lucas Van Dermark), who is having cold feet over his upcoming wedding to Simplicity Sunshine (Tamara Miranda).

It seems there is a history of madness in his family and Fielding worries he may become crazy like his three aunts. While appearing rather grandmotherly, the aunties have a secret. They open their home to elderly boarders who seem to have a habit of mysteriously disappearing.

Discovering what happens to those boarders doesn’t help with Fielding’s anxiety. Neither does his uncle, who is convinced he is Gen. George Armstrong Custer.

If this isn’t enough for the distressed hero, villain Ruthless Rogue has come to town and has every intention of stealing the Fletcher family jewels.

“This show is a classic melodrama with lots of audience participation as we encourage you to boo at the villain, cheer for the hero, say ‘awww’ for our heroine and generally have a fun time watching this zany comedy,” Joanne Ogle said.

Because the production lasts so long, some of the characters are portrayed by more than one person. This has been a struggle, most of the cast said, because they have had a hard time finding and keeping cast members.

Jeremy Trullinger will be the only one to portray Ruthless Rogue. He brought no acting experience whatsoever with him when he joined the cast, but after seeing a friend’s play with Umpqua Actors Community Theatre last year, Trullinger wanted to try his hand. He describes Ruthless as a typical comedy villain akin to cartoon character Dick Dastardly.

Contrarily, Van Dermark has some stage experience under his belt. He has acted at the Grand Victorian before, as well as a few productions during high school. He finds Fielding both a difficult and relatable role. He describes him as sweet, kind and charismatic, but extremely anxious.

Miranda is the youngest member of the cast, tackling the role of Simplicity Sunshine at the age of 13. Like Trullinger and Selzler, this is her first play, but she isn’t a stranger to the stage; her experience comes from singing at talent and variety shows.

“Simplicity is ditzy and stupid, but she is stupidly sweet. And it’s really hard to do,” Miranda said. “She is sweet 100% of the time, but she is kind of dumb. She is fun to play because it is completely out of my personal character and it’s fun to experience new things like this.”

The Ogles have also included a new $15 general admission option, which allows guests to see the show without the dinner. Concessions and short order food will be available for purchase for these guests. For more information and to purchase tickets, visit grandvictoriantheatre.com/events.

For COVID-19 reasons and because it makes it easier to interact with the crowd, guest capacity will be limited to 50 people a night.

On July 9-10, one of the few weekends without a show, the Grand Victorian will host a vendor fair. It will include a variety of indoor and outdoor vendors, a food truck, opportunities to shop the inventory of a local auction house, music and more.

“We will be going all summer,” Selzler said. “And I really hope Mark and Joanne are successful, because they are sweet people and they deserve this.”

What: "Madness, Murder & Matrimony, -or- Have Some Madeira, M'Dear?"