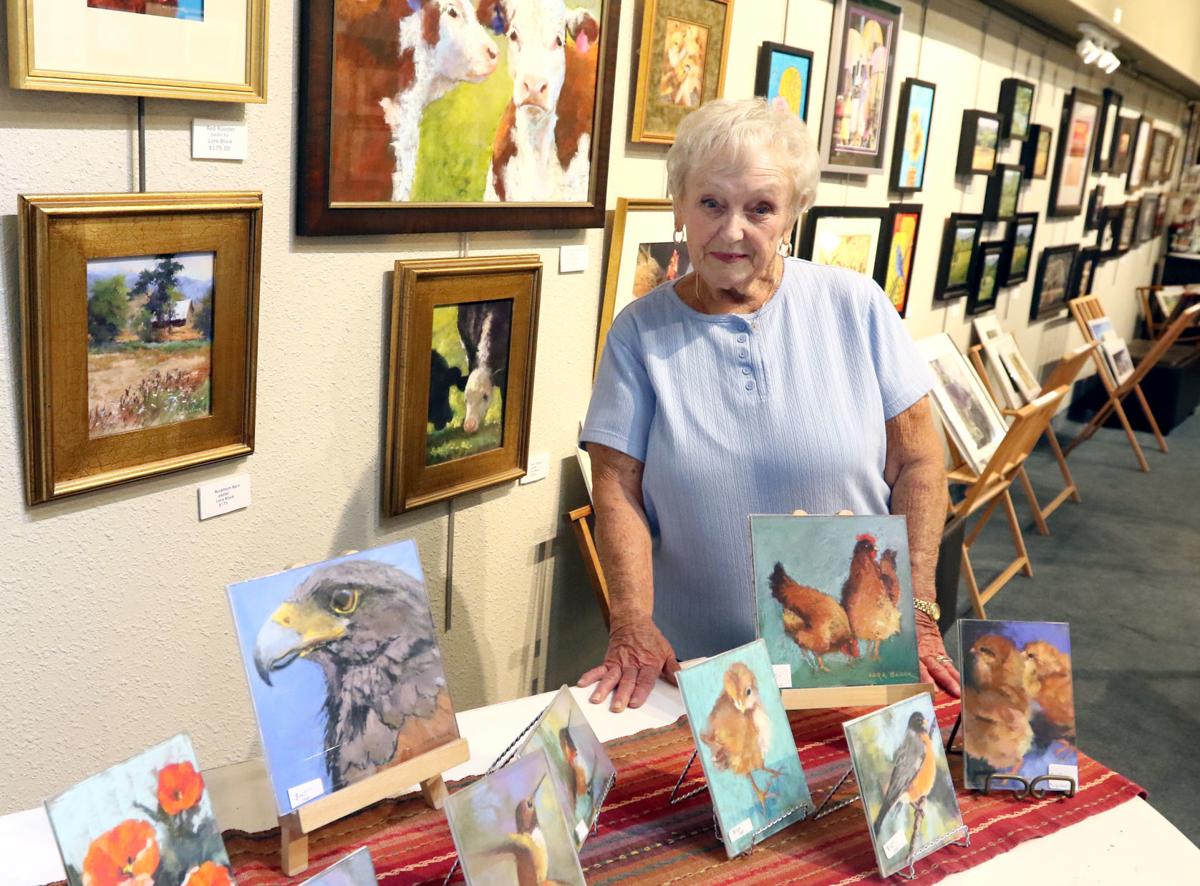 Artist Lora Block stands near a display of her art at Gallery Northwest in downtown Roseburg on August 25. 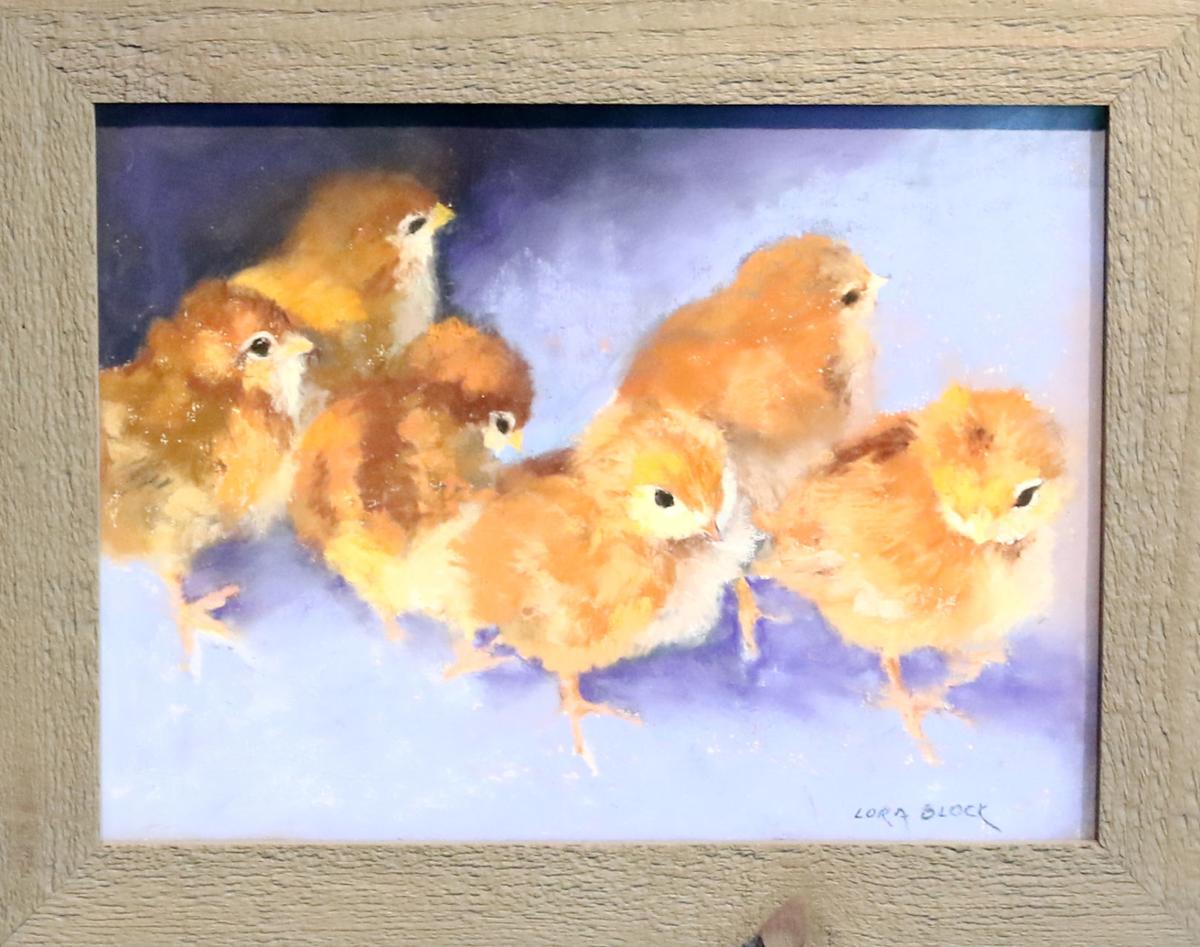 An award winning piece by artist Lora Block on display at Gallery Northwest in downtown Roseburg.

Artist Lora Block stands near a display of her art at Gallery Northwest in downtown Roseburg on August 25.

An award winning piece by artist Lora Block on display at Gallery Northwest in downtown Roseburg.

After her children were grown, Lora Block of Roseburg decided to get her apron and hands dirty in a different way. Block always loved art and now, with more time on her hands, she decided to further her painting education.

Stepping into her first oil painting class at the Umpqua Valley Arts Association in the ‘80s, that simple likeness to art snowballed quickly into instructing classes herself, starting the first local pastel society and greatly impacting the local art community in Douglas County today.

“It started as a hobby, and then got really serious,” Block said. After spending a little time with oil painting, which was considered the most popular medium, Block fell head over heels for pastels — a medium she said at the time was “new” even though it is one of the oldest methods of painting.

The first pastel class Block led started with eight people. The next class had more than 20. Today there are more than 105 members of the Pastel Society of Oregon where Block has been president since 1987.

“I thought, ’Let’s have a club,’” Block said while smiling as she reminisced over that moment nearly 34 years ago.

With only a small handful of pastel groups in the entire country, the structure of the society had to start from a blank slate and an empty bank account. She got together with fellow artist Jody Batson, who Block said had “grand ideas.”

With Batson’s ideas, Block’s passion and the support of the Umpqua Valley Arts Association — the first and still only Pastel Society in the state was founded.

“If it hadn’t had been for the art center guiding us and letting us under their umbrella, it wouldn’t have happened,” Block said. “UVAC took us under the wing.”

According to its website, the Pastel Society of Oregon’s mission is to “educate the public on pastel media, to provide opportunities for pastelists to exhibit, to encourage students in the arts, and to further educate artists through workshops in the media of pastel.”

Block said the Society started with about 35 to 40 members and a lot of those first painters are still active. “There’s a group of us that have been painting together every Tuesday night since the ‘80s.”

She said these friendships that have been born from this hobby and society are one of her favorite parts to it all. “I’ve never met better people,” Block said.

The society does a national show every other year and a member show on the opposing years. Block said in the beginning they would have artists from New York since there were so few pastel societies. Now, she said, “it has gotten huge.” Pastel societies have gone international with the International Association of Pastel Societies.

A group of local artists, including Block, also formed the cooperative Gallery Northwest on Jackson Street in downtown Roseburg.

“When we started this gallery, we didn’t even know each other and now, we’re family. You truly end up being friends,” Block said.

One of those friends and mentees of Block, Lauren Campbell, said Block has been instrumental to the community of local artists.

“Before meeting her, I always believed that artistic ability was something you were either born with or not. I always believed I had none. … Lora made me realize that much of it is a learned skill. I’m not talking about people who are truly innately talented, but the ability to produce art that you can be satisfied with and feel good about creating,” Campbell said.

Block believes that only 1%-2% of the population is considered “naturally-talented artists” and only 1% that “just can’t.” That leaves 98% of people that can learn if they have the desire.

“Everybody can do it — you just have to be taught to see in a different way,” Block said.

Campbell said that piece of advice was crucial for her.

“The ability to make marks on a two-dimensional surface and create a believable three-dimensional scene has a lot to do with learning how to see things rather than just looking at them superficially,” Campbell said. “It also has a lot to do with learning about distance and aerial perspectives, using color values and intensities to imply objects and shadows and the power of practice, practice, practice.”

Block said she has loved coming alongside artists and encouraging them. She said her goal has always been just to help them produce something that they love.

“Lora has been more than generous sharing her knowledge, encouragement and enthusiasm with so many of us over the years. Lora is who has inspired me the most. She is not only a good artist, she is a genuinely good person as well,” Campbell said.

At 81, Block is energetic and radiates with a joy for life. Although she is retiring as president of the society in the next couple months, she has no intention of slowing down. Block enjoys time with her husband of 64 years, her family — including nine grandchildren and 14 great-grandchildren, time with her chickens, yard and home.

She plans to continue painting at Gallery Northwest every Tuesday and being advisory help with the society’s transition into new hands and the new board.

Her secret? “There is always something to learn. You’ve got to keep doing something. Keep busy and do what you love,” she said. “It has been such a good time. It is a wonderful thing.”

For more information on the Pastel Society of Oregon, visit www.pastelsocietyoforegon.com or www.facebook.com/PastelSocietyOfOregon.