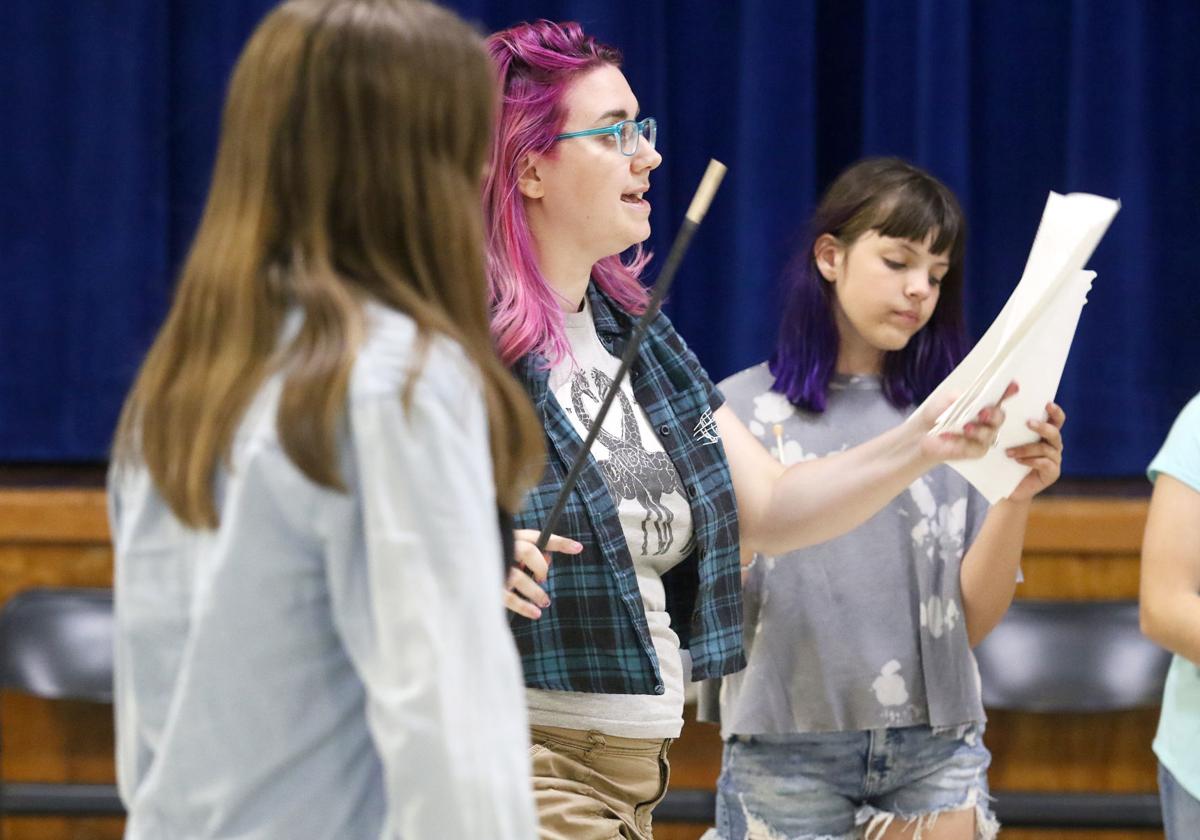 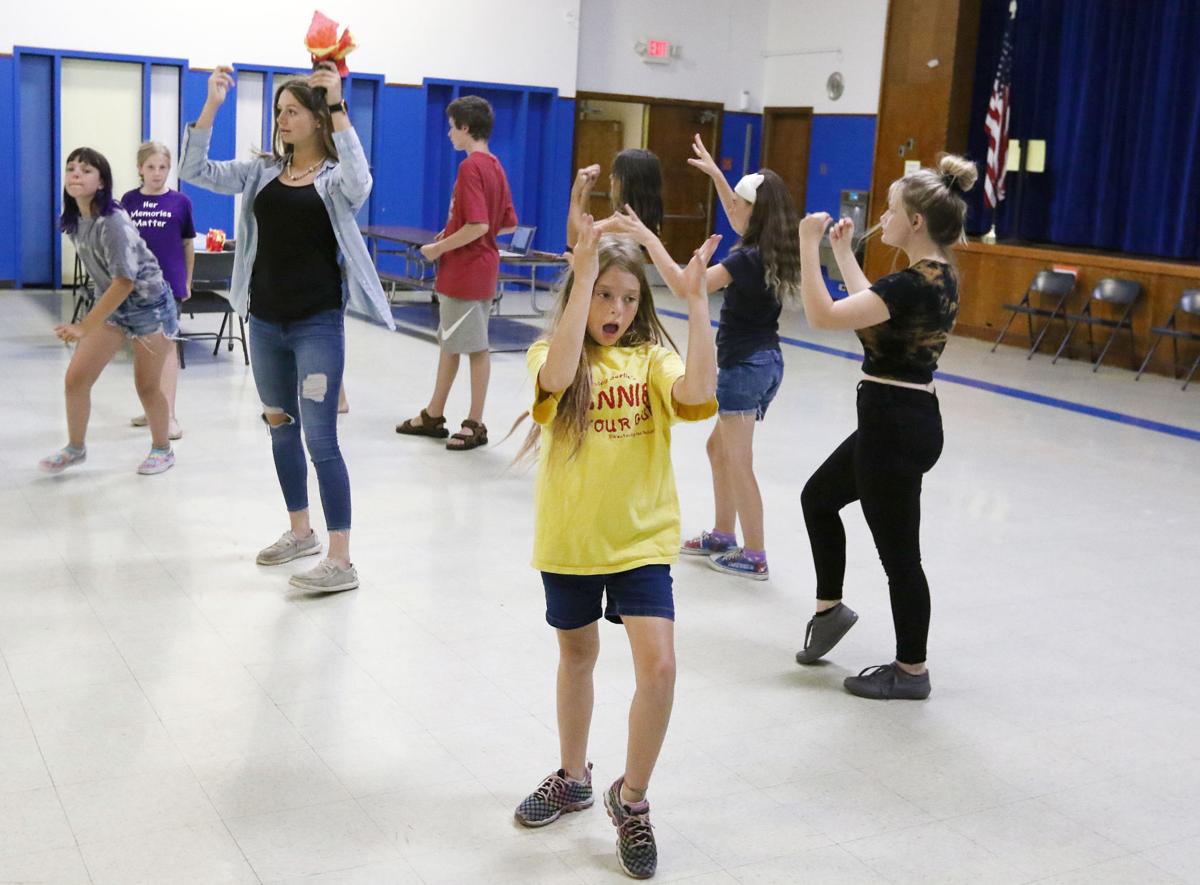 Kendra Carter, middle, rehearses with cast mates during a rehearsal for the Riverbend Youth Theater’s production of “Firebringer,” in Winston on Wednesday. 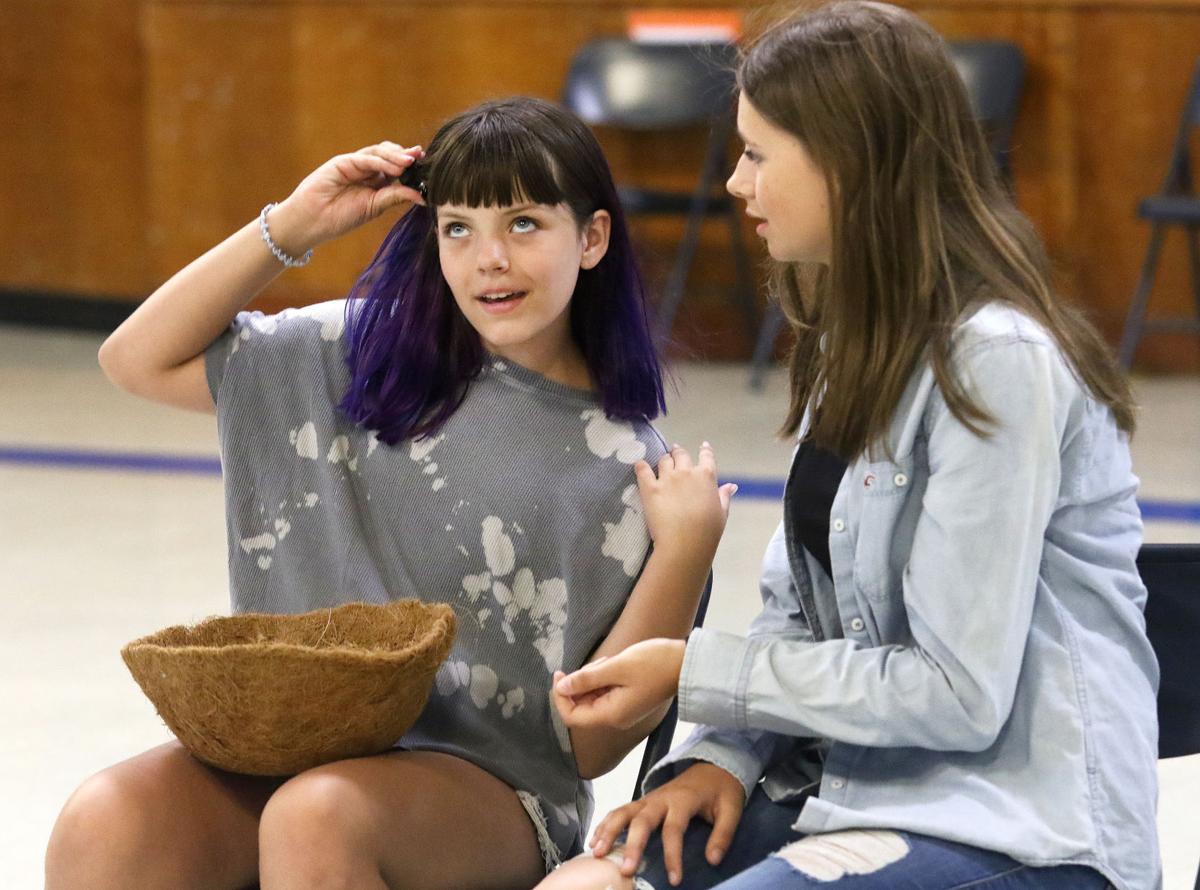 Amber Neiss, left, and Samantha Perron perform a scene together during a rehearsal for the Riverbend Youth Theater’s production of ‘Firebringer,’ in Winston on Wednesday. 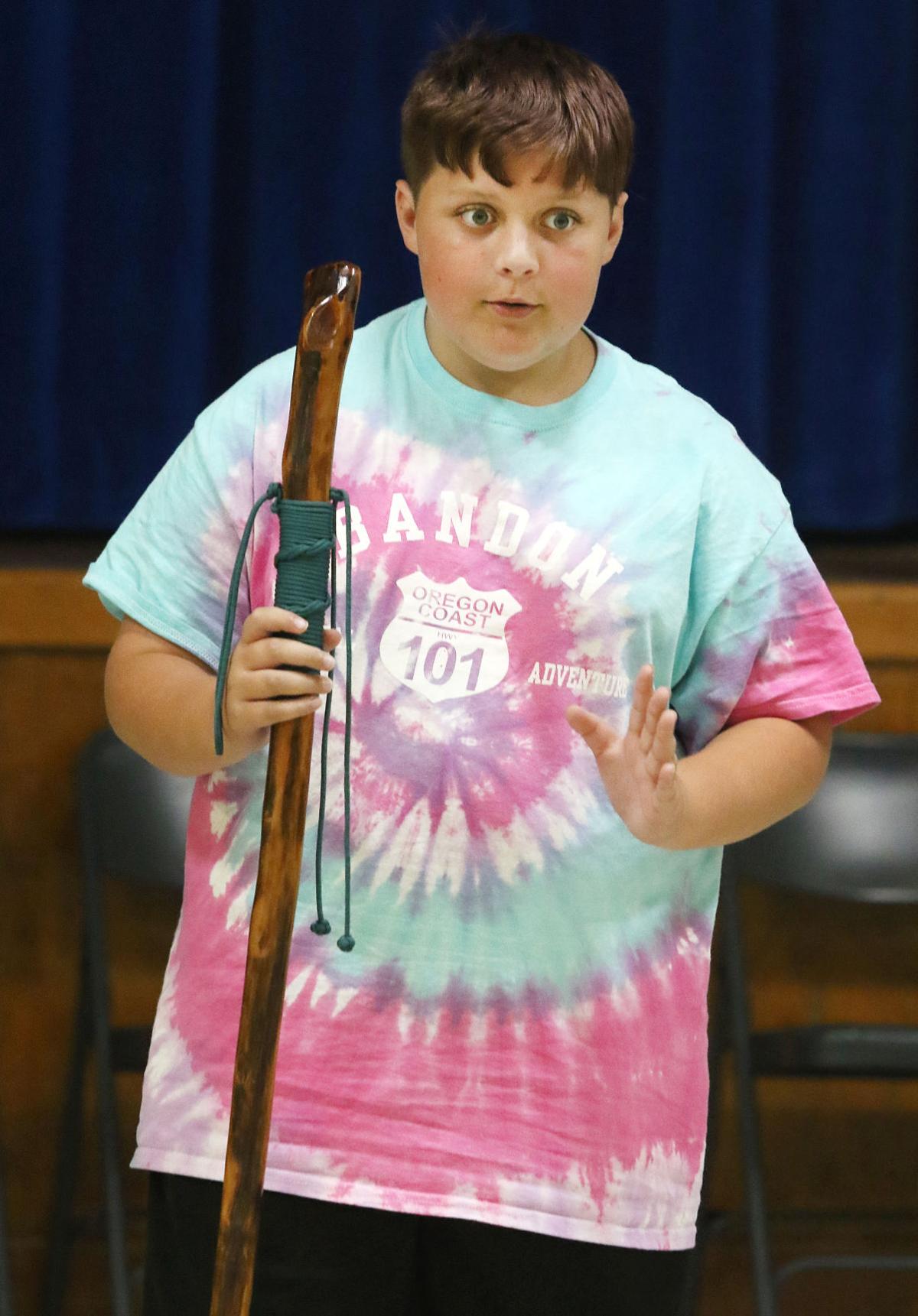 Hunter Baker performs during a rehearsal for the Riverbend Youth Theater’s production of ‘Firebringer,’ in Winston on Wednesday. 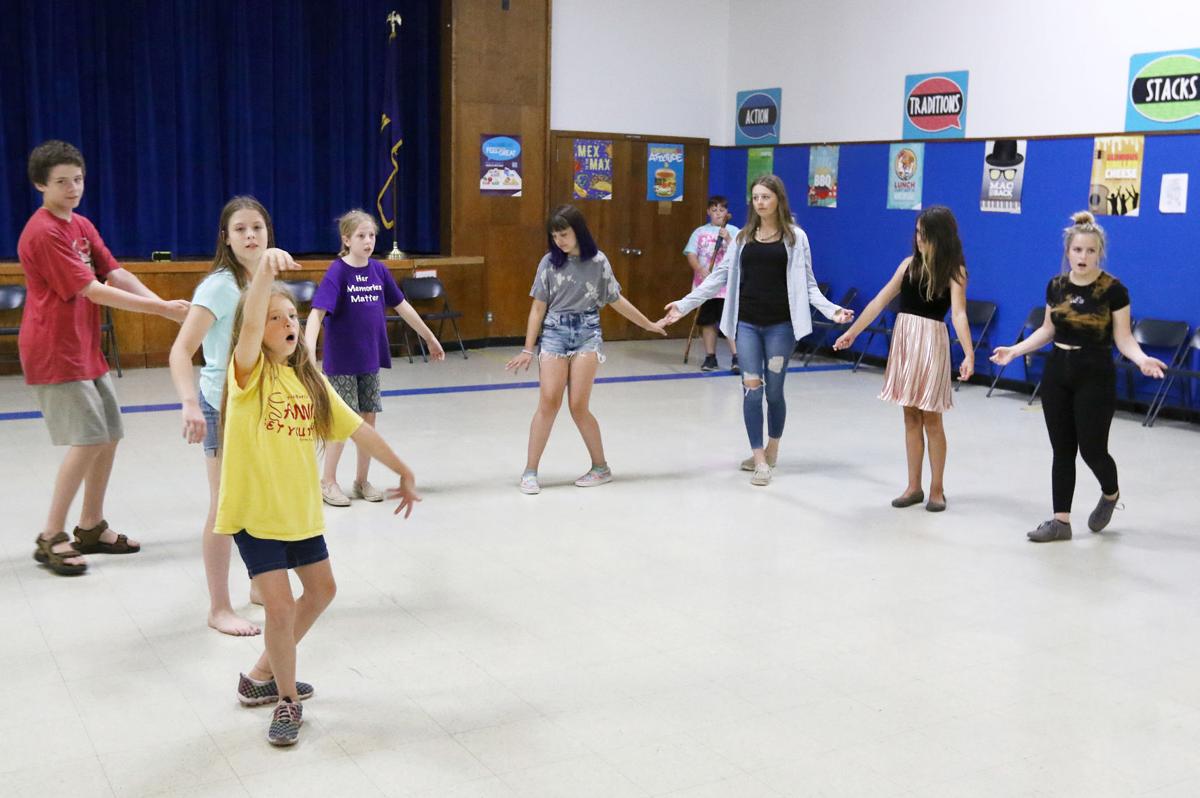 The cast of the Riverbend Youth Theater’s production of “Firebringer,” rehearses in Winston on Wednesday.

Kendra Carter, middle, rehearses with cast mates during a rehearsal for the Riverbend Youth Theater’s production of “Firebringer,” in Winston on Wednesday.

Amber Neiss, left, and Samantha Perron perform a scene together during a rehearsal for the Riverbend Youth Theater’s production of ‘Firebringer,’ in Winston on Wednesday.

Hunter Baker performs during a rehearsal for the Riverbend Youth Theater’s production of ‘Firebringer,’ in Winston on Wednesday.

The cast of the Riverbend Youth Theater’s production of “Firebringer,” rehearses in Winston on Wednesday.

“One of the things I think theater does for younger kids is to help them become more comfortable in their own skin and help them find their sense of self a little easier,” Barnes said. “They are all figuring out who they are at this age and by play and practice and be silly in another person’s persona, you become more comfortable with being able to be different on your own.”

This year’s production, entitled “Firebringer,” is filled with unique and silly characters. It is a musical comedy that follows a tribe of cave people as they attempt to survive and understand the world around them. Each member of the tribe has a role to play: food tester, nut collector, sky holder, tribe leader and more. However, tribe member Zazzalil is always questioning her role and looking for new things to invent.

“Along the way, they discover fire, which both causes and solves problems,” Barnes explained. “Overall, it’s just their funny journey to being closer as a tribe and being better as people. It is quite funny.”

As a main character, Zazzalil is behind both great achievements and great calamity for the tribe. She enjoys inventing new things and would rather explore the possibilities of new discoveries — like dancing, sandwiches and a spear — than do whatever task the tribe leader has assigned her.

It is her determination to show off the effectiveness of her spear that leads to the tribe’s first encounter with fire.

Samantha Perron plays Zazzalil, whom she describes as a bit of a rebel.

“She’s always been against the rules that Jamilla has in place for the tribe, but she has to obey them because she wants to be a somewhat good role model,” Samantha said. “She just wants to be lazy, she wants to change things for future generations by creating different things, like the spear to kill the mammoth that killed her father.”

Zazzalil is a somewhat difficult character for Samantha. The 15-year-old considers herself a natural-born leader, but Zazzalil is much more of a follower. Samantha said she has also never played a main character before, though she has been acting for around six years.

Nevaeh Simon, 14, finds her character far more relatable. She plays Emberly, the tribe’s food tester. Not only does she help gather food, but she is also the one to check if the food is good or poisonous.

“I honestly relate to her. I eat a lot of food. I randomly go through my house and see if food is good or not, so I relate to this,” Nevaeh said.

She is a new member to the program and has never acted before.

“I’m always doing the same thing every year, so I wanted to try something new,” Nevaeh said.

Jack Perron, who plays Chorn, was also looking for something to keep him busy for the summer. His character has a rather world-shattering secret he reveals near the end of the production.

Eleven kids ranging from ages 10-15 are involved with the production.

Barnes wanted to give the youth a full theater experience. She expanded past acting and singing skills to include costume design. Each performer was able to design and build their character’s costumes and props.

Firebringer will premiere 7 p.m. Friday, July 23, and Saturday, July 24, at Riverbend Park, 223 Thompson Ave., Winston. Like all Riverbend Live shows, admission is free. Guests should bring their own seating. Event rules can be found at riverbendlive.org/rules.

“I just want everyone to have fun,” Barnes said. “I hope the audience laughs and they don’t take it too seriously, because it is definitely not a serious play. I just want the audience to sit back and watch these kids that worked really, really hard and be proud of what they did.”