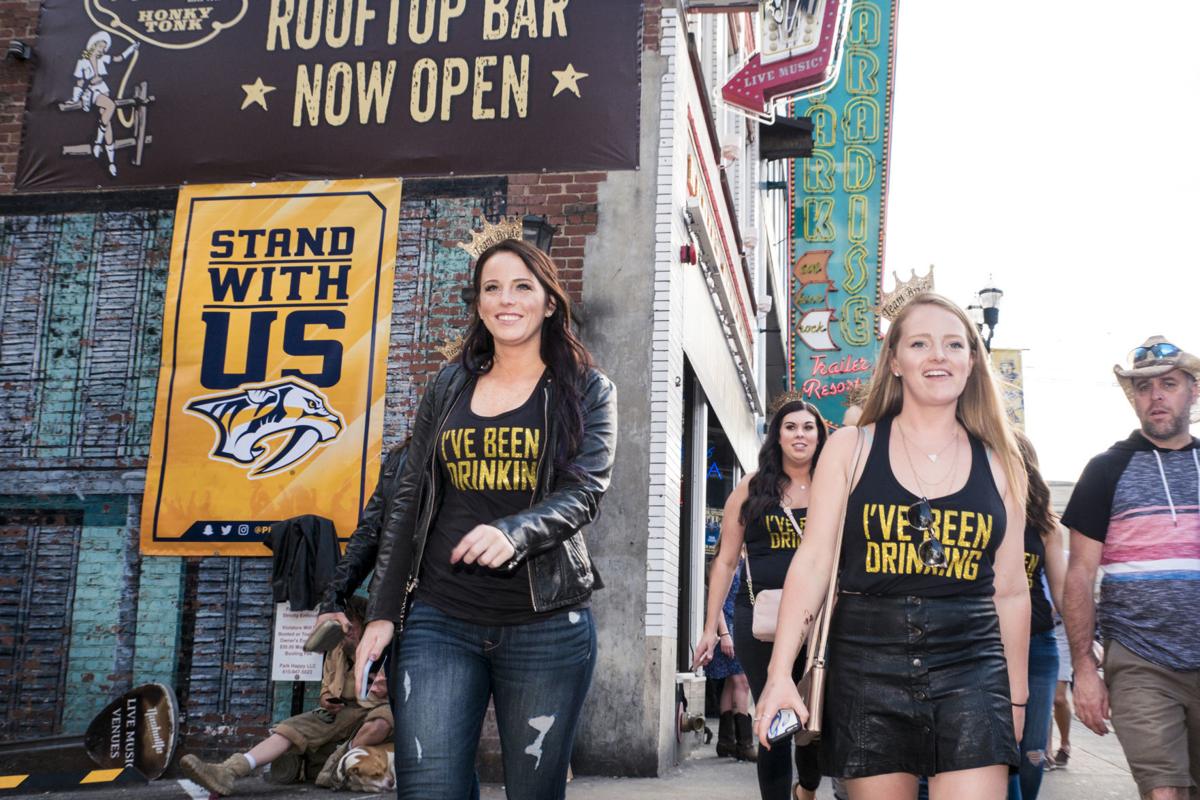 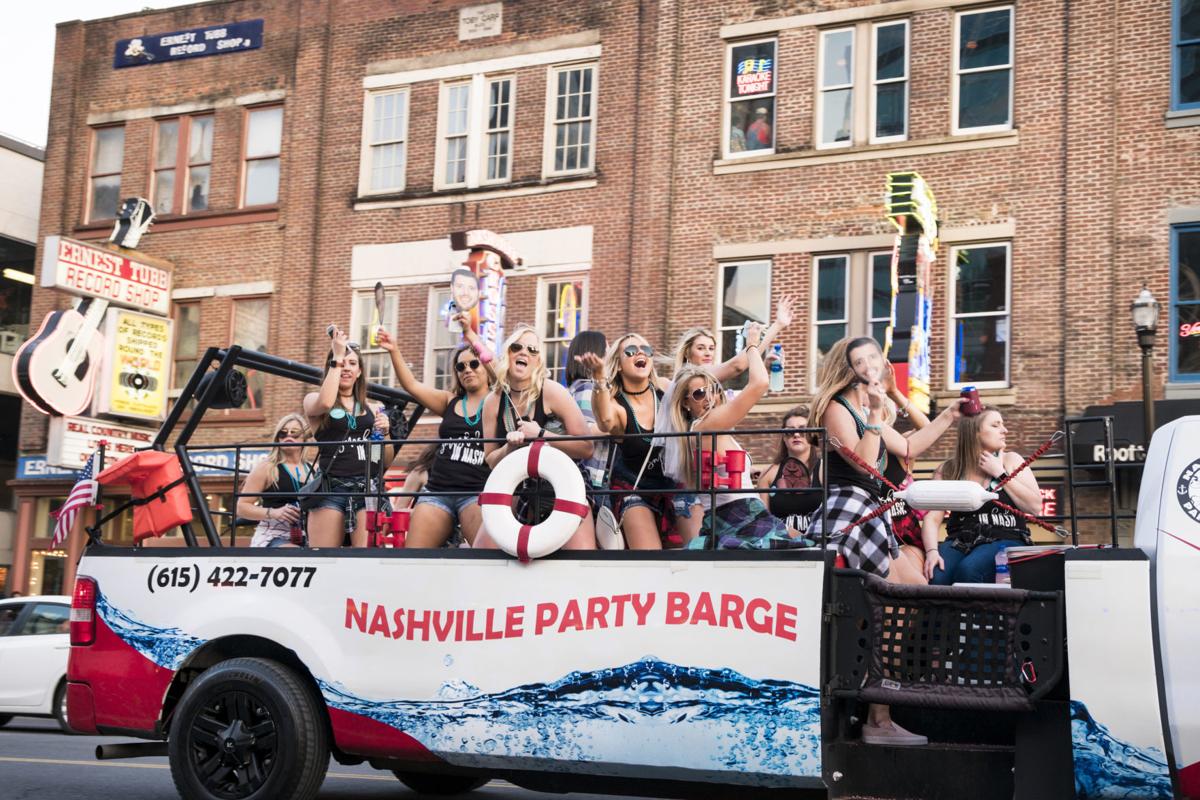 A bachelorette party rides a barge on Broadway in Nashville, Tennessee, on April 27. “They can be a bit loud or a bit messy, but we love them,” says Butch Spyridon, the chief of the city’s convention bureau, of the pre-wedding parties. 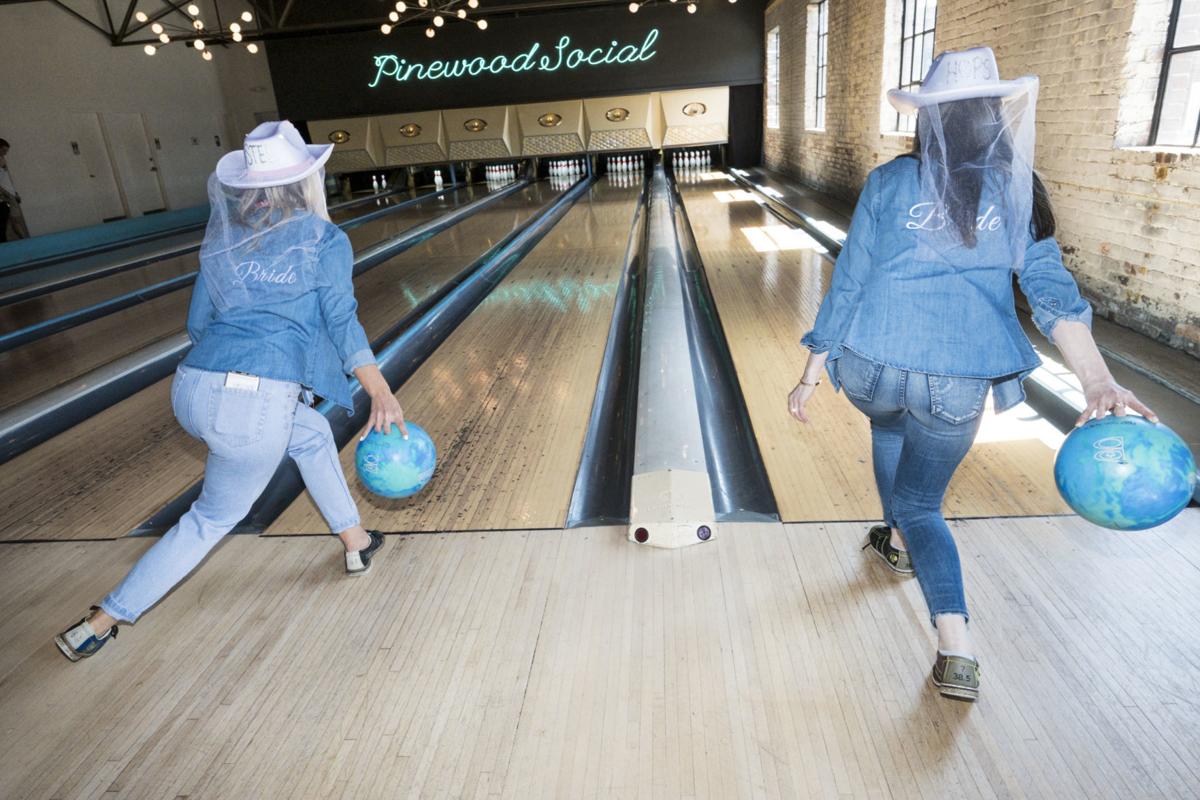 A bachelorette party from Montreal goes bowling at Pinewood Social in Nashville on April 27.

A bachelorette party rides a barge on Broadway in Nashville, Tennessee, on April 27. “They can be a bit loud or a bit messy, but we love them,” says Butch Spyridon, the chief of the city’s convention bureau, of the pre-wedding parties.

A bachelorette party from Montreal goes bowling at Pinewood Social in Nashville on April 27.

Women in short skirts dance at the bar with their hands in the air. Many don sashes that read “bride squad,” and there is the occasional tiara-wearing bride-to-be on her last fling in a VIP area. Bartenders sling drinks to hooting patrons as musicians bound around the stage. The woman of honor may even join them if the Fireball shot kicks in. Outside, lights illuminate the main strip so it almost feels like daytime, or at least, twilight. Revelers wander the busy sidewalks in search of late night eats or their Uber drivers to take them to their hotels. The neon signs still flicker.

No, this isn’t Vegas. It’s Nashville — and it’s possibly the hottest destination for bachelorette parties in the country.

“The increase in bachelorette parties became evident about four years ago,” said Jeff Eslick, the media manager for Tootsie’s Entertainment, which owns popular spots in Nashville like Honky Tonk Central and Tootsie’s Orchid Lounge. “The spring and summer weekends have Broadway filled with what seems like hundreds of packs of women wearing shorts, boots and shirts reading ‘someone’s last rodeo.’”

Nashville hosted 14.5 million visitors last year, and that number continues to rise exponentially, according to Butch Spyridon, the president and chief executive of the Tennessee capital’s Convention & Visitors Corporation. The airport is now one of the fastest-growing airports in North America, bringing in bachelorettes from nearby states and even revelers from international locations. The number of new restaurant openings doubled since 2015, and nearly 15,000 hotel rooms are in the development pipeline. But with all the changes, business owners and residents say, the city continues to feel local, laid-back, and accessible for tourists to dine on Southern fare, peruse shops and art galleries, and experience the epicenter of country music.

For evidence of this growth, look no further than the throngs of young people who pack Broadway, downtown Nashville’s main drag of live music venues, bars, and restaurants. This is the home to the popular honky-tonk, a term used to describe both the bar and the style of country music played within. Musicians have long descended upon this strip to show crowds — and hopefully industry scouts — what they’ve got. Nashville, after all, is known as Music City for its role in history of country music, and houses landmarks like the Grand Ole Opry, Country Music Hall of Fame and Ryman Auditorium.

Live music is the top draw, especially for bachelorettes. Talented performers, songwriters and aspiring stars provide endless entertainment at every turn. Most bars don’t charge a cover, and the proximity of attractions means groups can effortlessly wander from place to place. Even if you aren’t a fan of country music, the vibrant energy of the honky-tonks exudes merriment. “Our performers are aware of the impact bachelorettes have on the tip jug, so they cater to them,” Eslick said. “No bachelorette party is complete without getting on stage with the band.”

He also noted that many honky-tonks and restaurants have VIP areas that can accommodate large groups, and he fields questions weekly from inquiring bridesmaids organizing trips. Lisa Curry, the event sales manager of the 21c Museum Hotel Nashville, which opened last year, said that restaurants also crafts menus to delight female patrons. The hotel’s Gray and Dudley, for instance, offers cocktails served in vintage beverage decanters or pitchers. Thompson Hotels also opened a property in town, with a trendy rooftop that features views of Nashville’s chic Gulch neighborhood. The hip Pinewood Social functions as a craft cocktail bar, co-working space, and bowling alley that can accommodate groups for anything from casual afternoon coffee to all-night festivities.

Bach Weekend, a planning company which has spawned from the rise in pre-wedding celebrations, organizes entire itineraries, including brewery tours, open bars, and pole dancing classes with matching swag. The company estimates a partygoer spends about $850 for the weekend (without travel costs) to a destination bachelorette party.

The part that makes Nashville stand out is the fact that locals partake in many of the same activities as the tourists, said Benjamin Goldberg, a managing partner of Strategic Hospitality, which owns Pinewood Social. Brunch at a neighborhood eatery may include booths of squealing bachelorettes but also young professionals grabbing a bite with friends.

The growth of the city is also drawing in younger residents, thanks to the affordable lifestyle and opportunity to work on creative pursuits in music, art and fashion. Boutiques like White’s Merchantile, Judith Bright and Peter Nappi honor the city’s artisans, and vibrantly colored murals have sprung up all over the city. The 21c Museum Hotel allows the public and guests to jointly admire their three floors of exhibition space showcasing 21st-century works. “The art scene is absolutely booming,” Curry said. “With Instagram, photo ops have become a huge draw for bachelorettes.”

There is, of course, the typical debauchery. The Pedal Tavern is a party bike tour where riders knock back beers while cycling down Broadway. At Tootsie’s, vodka drinks and Fireball whiskey top the most requested beverage list. Despite it all, businesses still welcome them.

“They are a fun-loving group,” Spyridon said. “They can be a bit loud or a bit messy, but we love them.”