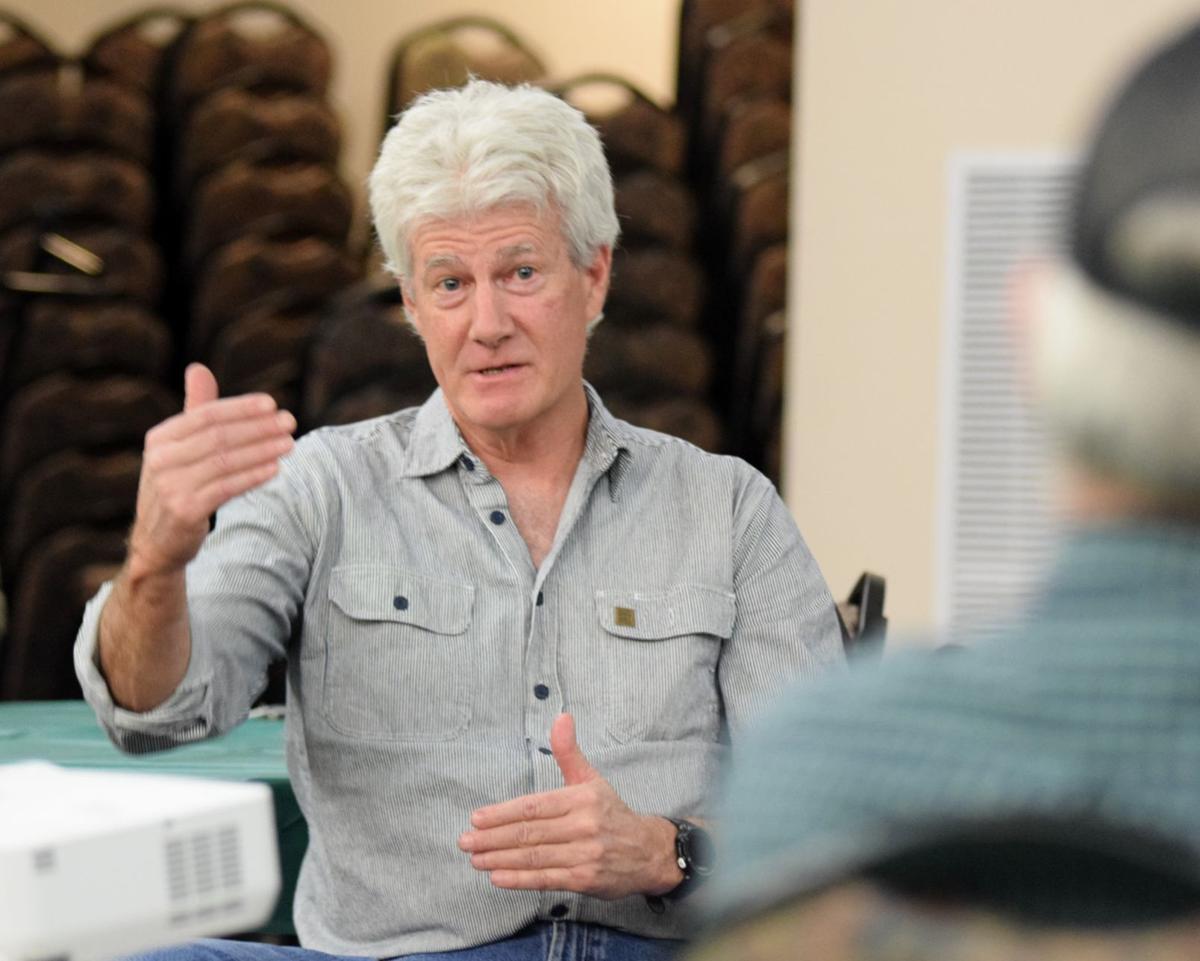 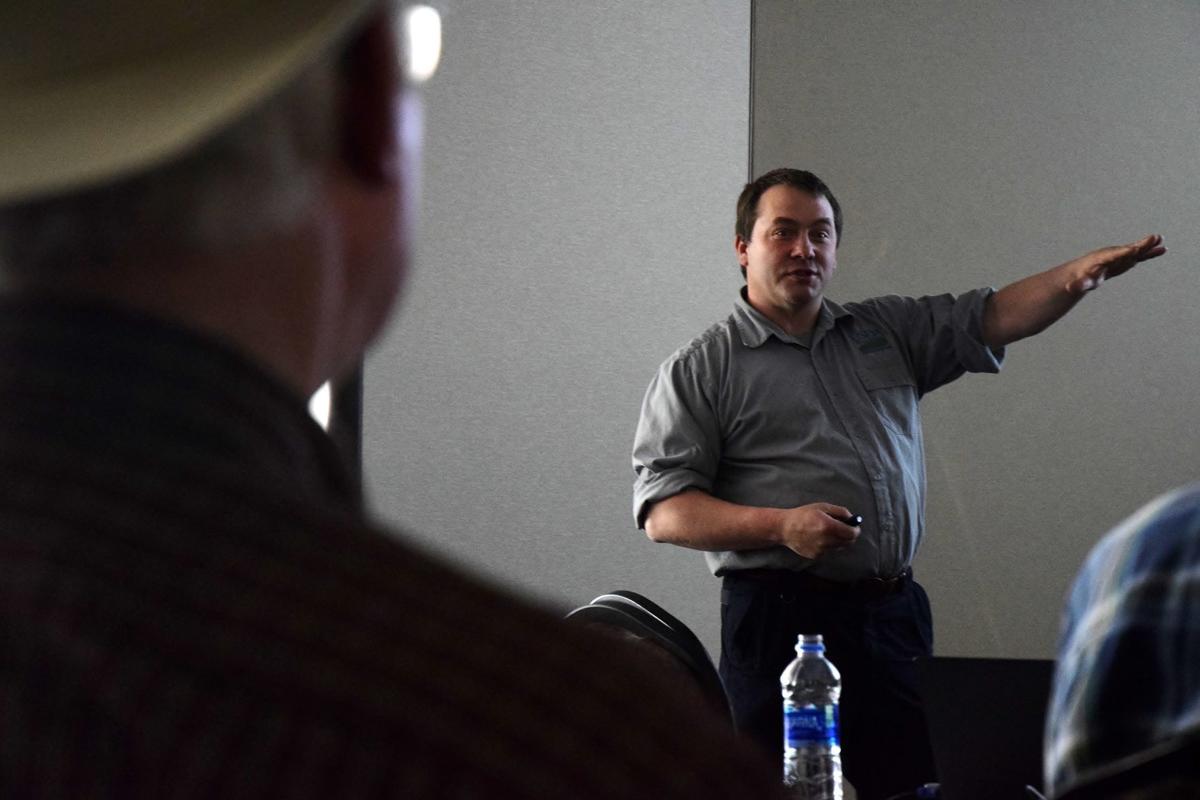 Paul Wolf of the U.S. Department of Agriculture explains non-lethal wolf deterants during a seminar at the Douglas County Livestock Association’s spring livestock conference on Wednesday in Winston.

Paul Wolf of the U.S. Department of Agriculture explains non-lethal wolf deterants during a seminar at the Douglas County Livestock Association’s spring livestock conference on Wednesday in Winston.

WINSTON — Authorities on Wednesday urged caution to ranchers and livestock owners who could face potential problems with gray wolves, but they acknowledged the chances of encountering one of the endangered animals in central Douglas County is slim.

State and federal fish and wildlife officials took part in a roundtable discussion during the final part of the Douglas County Livestock Association’s spring livestock conference at the Winston Community Center. The meeting came not long after the reclassification of the Indigo Pack by the Oregon Department of Fish and Wildlife, which is the first documented wolf pack on record in Douglas County in recent memory.

The pack, however, has remained almost exclusively near the eastern end of Douglas County since it was discovered as a group of wolves in the winter of 2019. Its movement has only extended from the borders for Lane and Douglas counties, with its most recent documented activity coming near Highway 138E north of Diamond Lake.

That suggests, for now, that those particular wolves won’t create issues for anyone west of the Cascade Mountain Range.

“I’d be surprised if you had any problems down here in the lowlands,” John Stephenson of the U.S. Fish and Wildlife Service told the crowd in attendance.

The Indigo Pack is one of 23 wolf packs in Oregon, which is an increase from the 16 packs the ODFW documented this past winter. Although the department’s annual wolf report likely won’t be completed until April, wildlife biologist Tod Lum said the pack has an estimated four to five wolves. The ODFW considers a pack of wolves to be four or more.

Included in the Indigo Pack is OR-80, which the ODFW trapped and collared this past fall. The collar retains power for close to three years and, along with human interaction, is a way for wildlife officials to track wolf-pack movements.

Indigo, much like the Rogue pack that remains near the border of Klamath and Jackson counties, has the local landscape on its side. Unlike the packs living on eastern Oregon’s flatter landscape, wolves in the cascades have the advantage of using trees and rocky landscape as an aid to kill prey. Lum said there are two livestock pastures near where the Indigo Pack’s movements are, although no livestock depredations caused by wolves have been reported to the ODFW.

He also said in a conversation separate from the roundtable discussion that wolves often break off from their packs and venture off. That, he said, leaves the possibility that other wolves could be in Douglas County. They just haven’t been seen yet, which is why officials are urging landowners to be prepared.

“I think people are finally starting to get that message,” he said.

The roundtable talk was one of two sessions at the conference discussing the state’s continuing reintroduction of wolves, which came into Oregon from Idaho in the mid-1990s. The nomadic species eventually found its way into western Oregon, where its low overall numbers help qualify it to be a federally protected endangered species.

It’s illegal to take, harm or kill a gray wolf, and those actions are punishable by penalties of up to one year in prison and/or a fine of up to $100,000. That’s why United States Department of Agriculture representatives Paul Wolf and Alyssa Mehaney also gave an instructional session displaying non-lethal means of deterring wolf attacks.

One suggestion was for ranchers to scan land for bone piles left from deceased animals, which prevents an attractant smell for potential wolf attacks. Another was plastic colored strips hung on metal fences — the movement of the strips in a light wind has served as a successful wolf deterrent.

Others include the wiggly man — one of the slender blow-up beings typically seen dancing in the wind at auto-sales lots — or range riders, who essentially ride around a rancher’s property on horseback in an effort to patrol the grounds for potential predators.

Mehaney said she’s served as a range rider for landowners who have had previous problems with wolves. She also said that “around 85%” of her interactions with landowners involve educating them on what they can and can’t do.

“A lot of times we have to emphasize that there aren’t a lot of options on the table simply because (wolves) are an endangered species,” Wolf said.

The U.S. Fish and Wildlife Service proposed a rule in early 2019 that would strip wolves from federal protection in the lower 48 states by delisting them under the Endangered Species Act. Although Stephenson said during the roundtable discussion that federal delisting could happen by the summer, if not sooner, they’ll still have protections under the Oregon Wolf Conservation and Management Plan, which the ODFW put into place this past summer. A full list of non-lethal deterrents, including the aforementioned ones, are listed in the plan.

That plan, Wolf noted, also says landowners must try all non-lethal deterrents possible before being able to kill a wolf. In some cases, landowners might have to have as many as four livestock depredations before lethal actions are allowed, although ranchers can apply for federal compensation if wolves cause livestock losses.

“It’s like I said before,” Wolf said. “The wolves are here. Now we have to deal with it.”

Um....if a wolf is attacking my pets (cats, dogs, etc.) or livestock, I am not going to shake a colored ribbon at it.