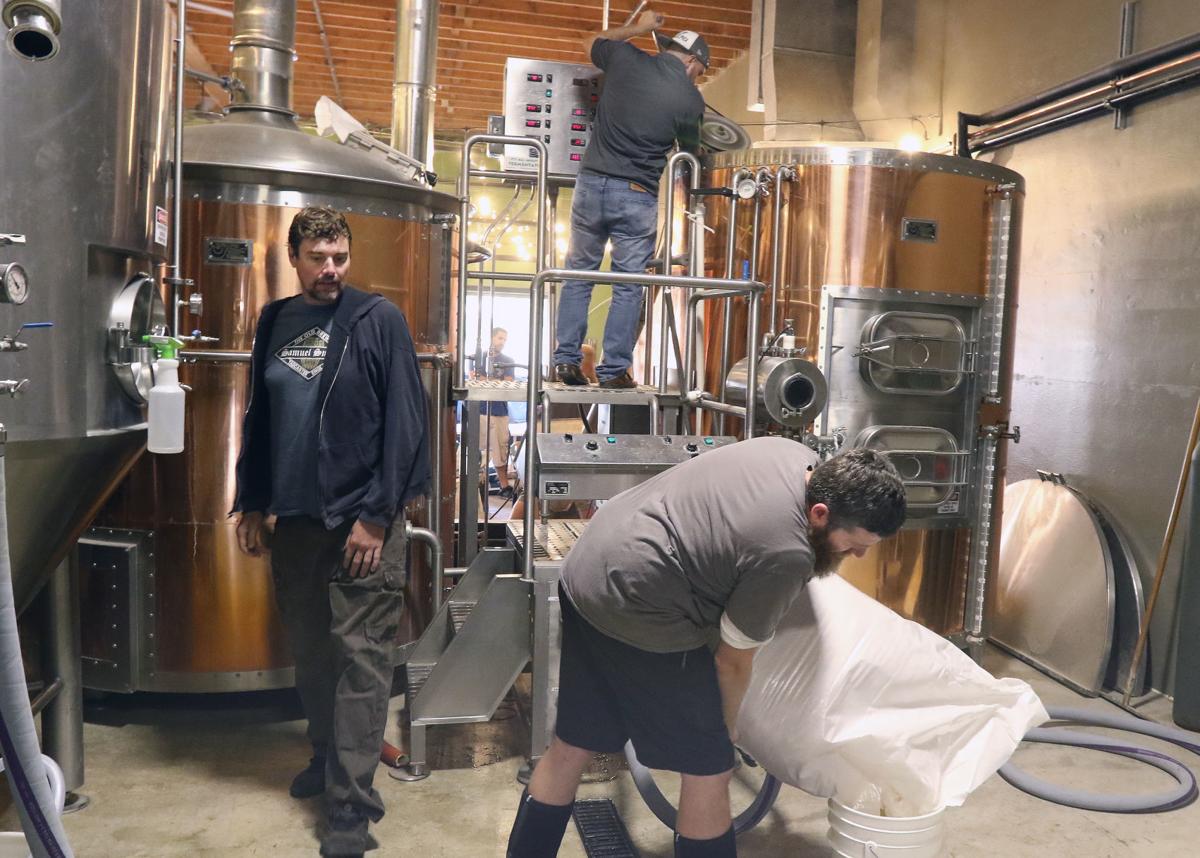 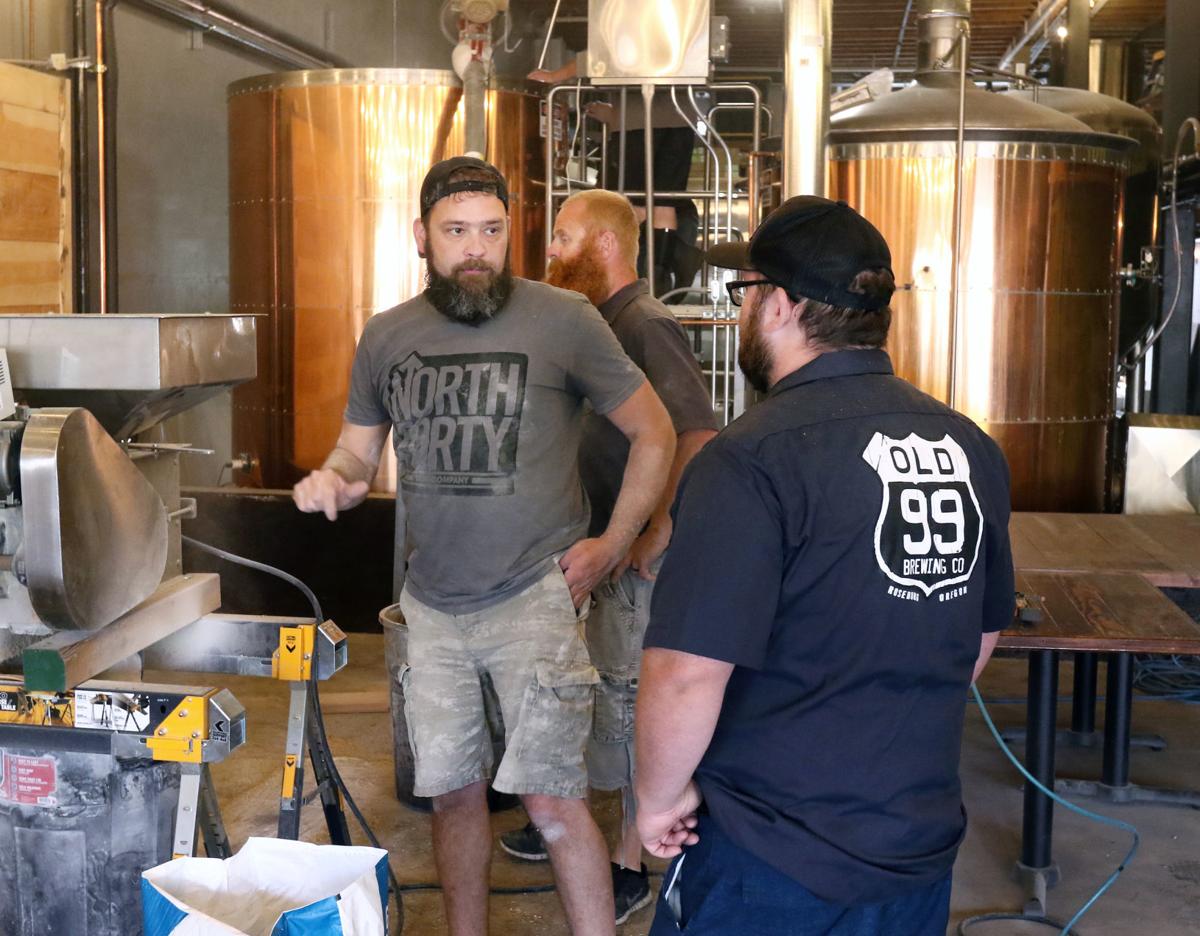 The scene at the North Forty Beer Co. building downtown was nothing short of a close family coming together to do what they do best — make beer. Sawdust was still flying inside the almost-ready North Forty building and beer was flowing as brewers and brewery owners from Douglas County gathered Tuesday morning to start a collaborative beer in remembrance of the 2015 Umpqua Community College shooting.

The beer will go on sale at the end of the month, and all the proceeds will be directed to grants in honor of the nine victims.

Old 99 contributed the hops — a mix of Mosaic, Idaho Seven, and Ekuanot — while Country Malt Group donated the grain. Umpqua Strong purchased the yeast, Salud fed the team lunch, and everyone contributed their skills, hands and “tons of love,” according to Draper Brewing owner Sam Eslinger.

The day started with 815 pounds of grain being milled, an hour of mashing, testing, and then finally the boil. After that, the beer was moved to the fermentation process. With a lot of waiting in between, the guys sat around the bar, trying each other’s beer while talking and laughing about work, family, community and life.

“It’s just cool to be able to say this was the first collaboration with all of us — it is a beautiful thing,” said Salud Restaurant and Brewery owner Manny Anaya. “Everyone has a great rapport with each other — we have organic conversations.”

All of the brewers were living locally when the UCC tragedy happened. One thing they all commented on was how strongly the community joined together afterward.

In 2015, Eugene-based brewery Hop Valley collaborated with Old 99, Draper, Two Shy, Backside, and Salud to produce the Umpqua Strong Ale. After kegs were tapped, the beer raised thousands of dollars for Umpqua Strong.

“All the brewers are community members who, like everyone, were affected by 10/1 and want to express that feeling of compassion in whatever way they’re able,” said Randi Feland, president of the Umpqua Stong board and coordinator for the Umpqua Strong 9K and 5K Run/Walk. “They put their heart and soul into what they do. I think this beer is just a way for them to showcase what they love doing, do it together, and do it for a good cause.”

The brewers agreed that their relationships go beyond just working in the same industry. They are friends who help each other grow and want to bring the town together, and see the county prosper.

“The teamwork is amazing to see, because while they each run their own businesses and are basically competitors, they have such a great camaraderie and everyone pitched in to make this custom beer possible,” Feland said.

“The beer might be ‘Hazy’, but the truth is clear — that this community knows how to come together,” said Matt Hill, co-owner of Old 99.

Brittany Arnold is the special sections editor and can be reached at 541-957-4210, barnold@nrtoday.com.

Mash in all the grains at 152 °F in 5 gallons of water, and hold this temperature for 60 minutes or until conversion is complete. Raise temperature to 168 °F for mashout. Vorlauf for 15 minutes, then sparge with 170 °F water until wort reaches 1.010 specific gravity. Collect roughly 6 gallons of wort.

Boil the wort for 60 minutes, adding the whirlpool hops at flameout. Whirlpool for 30 minutes, allow to stand for 20 minutes then chill to 68° F and rack to the fermenter, being certain to oxygenate the wort.

Add the first dry hop addition when the gravity reaches 1° Plato from terminal gravity (1.016–1.018). Add the second dry hop addition after racking off the yeast, allowing the beer to cold crash. After two or three days, remove the hops or rack the beer a second time.

Prime the beer with corn sugar and bottle condition or keg and force carbonate.

Extract Brewing can be done by substituting 5.75 lbs. Extra Light or Pilsner LME for the base malt, and using a partial mash for the specialty grains.

“The beer might be ‘Hazy’, but the truth is clear — that this community knows how to come together,” Matt Hill, co-owner of Old 99.