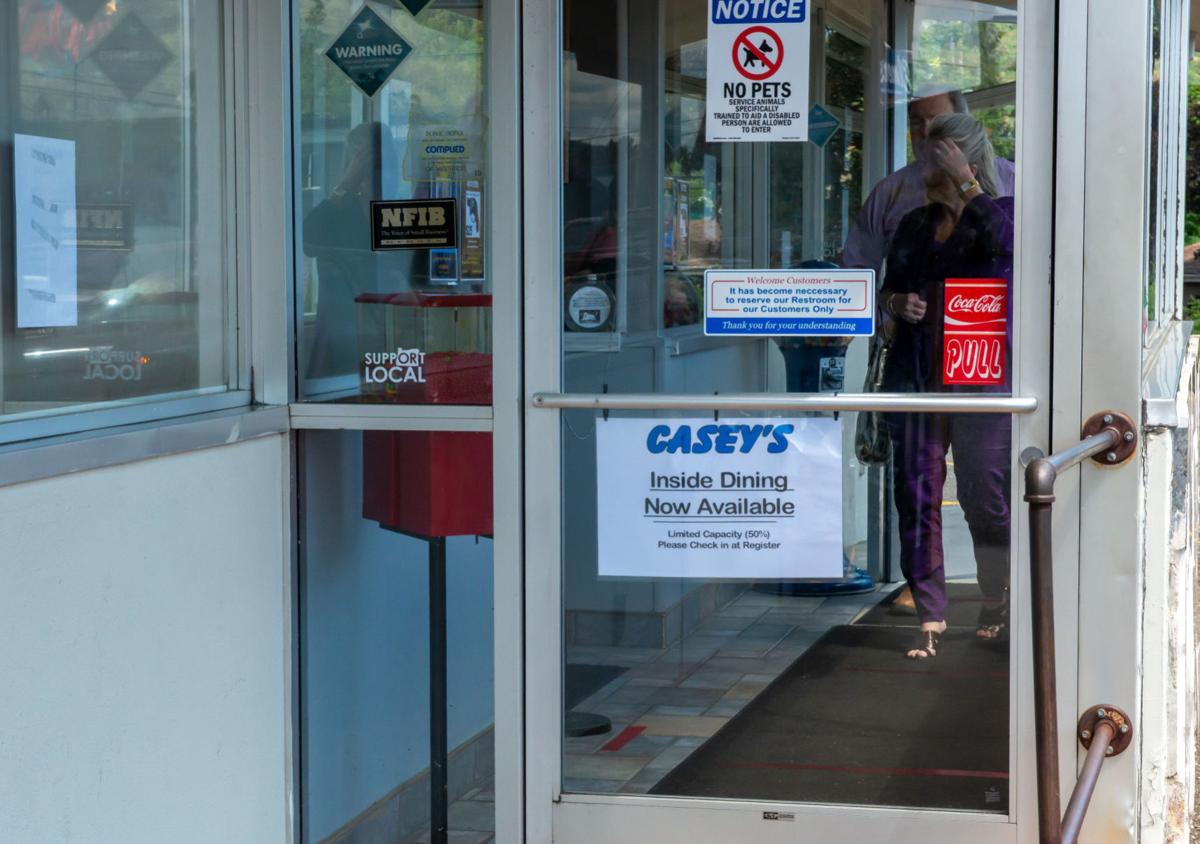 The sign on the door at Casey’s Restaurant on NW Garden Valley Boulevard welcomes customers this past month. The restaurant is appealing its fine from the Oregon Occupational Safety and Health Administration. 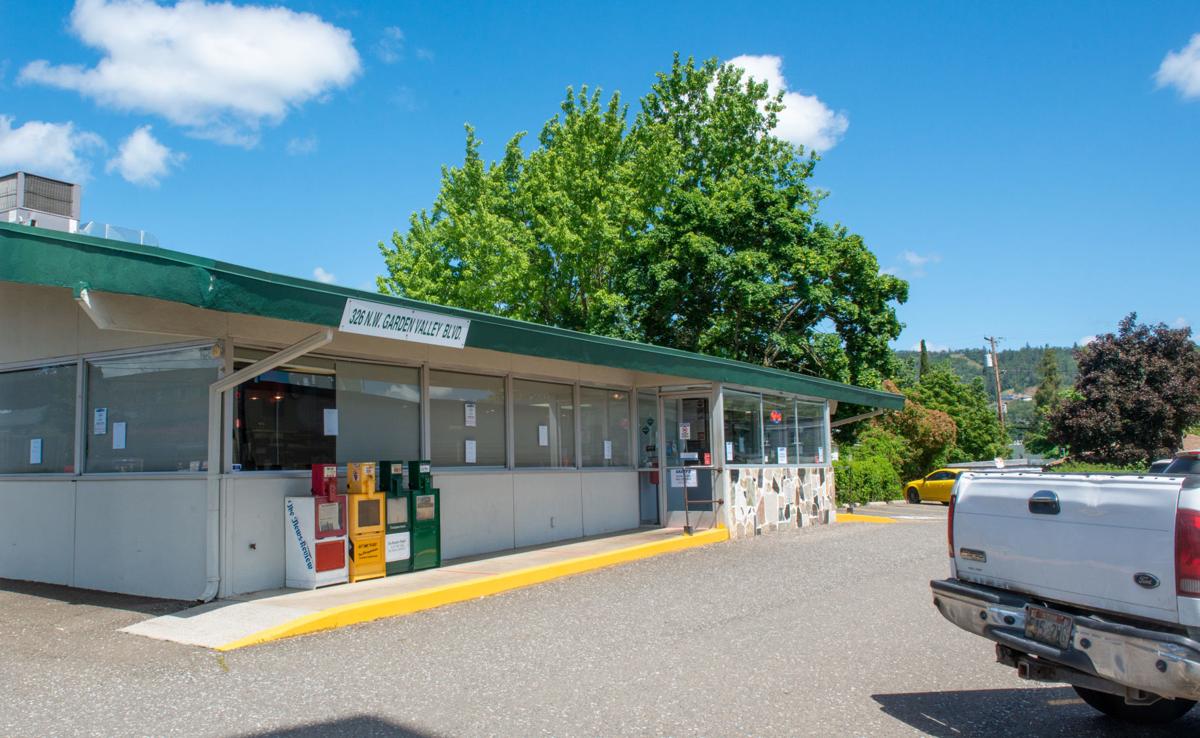 Casey’s Restaurant in Roseburg reopened its inside dining area on Tuesday, and was seeing a steady flow of customers by Wednesday afternoon.

The sign on the door at Casey’s Restaurant on NW Garden Valley Boulevard welcomes customers this past month. The restaurant is appealing its fine from the Oregon Occupational Safety and Health Administration.

Casey’s Restaurant in Roseburg reopened its inside dining area on Tuesday, and was seeing a steady flow of customers by Wednesday afternoon.

Casey’s Restaurant in Roseburg has appealed its fines from the state and has asked for a conference on the matter.

Casey’s had 30 days from the date of the citation to file an appeal, which it did on June 3.

Casey’s is owned by Lance and Laurie Mounts. On Thursday, Laurie Mounts declined to comment and referred questions to their attorney.

The restaurant is being represented by George Goodman, of the Newberg firm Cummings Goodman Denley & Vickers. On its website, the firm says it has over 20 years of experience representing clients fighting OSHA citations in the Northwest and across the country.

Reached by phone Thursday, Goodman said he typically doesn’t discuss cases that are in litigation. He did say that OSHA issued Casey’s what is known as a red tag warning, which is typically associated with shutting down a business due to an imminent danger that people may get sick or injured.

“I have seen no other cases in Oregon where they issued a red tag like this. It’s very unusual,” Goodman said.

In the appeal, Casey’s challenged the validity of the fines and denied it violated any laws.

“The reason for this appeal is that the Employer contests the validity of each and every violation and penalty contained in the above-captioned citation. The Employer also denies the assertion that there was any violation of the Oregon Safe Employment Act in this matter,” the appeal states.

Casey’s requested an informal conference “in an attempt to negotiate a possible settlement.”

A date for that conference has yet to be set.

Casey’s is backed by a legion of supporters in its fight against the citation and fines.

On May 28, the Mounts’ opened a GoFundMe account, seeking $14,000 to help pay legal fees in its fight against the fines.

“To our customers and supporters, it has come to our attention that many of you would like to stand side by side with us to uphold our freedom and constitutional rights,” the Mounts wrote on the GoFundMe page. “As you all may know, we chose to open our restaurant outside of Governor Kate Brown’s executive order. We want you all to know that we did not have any malicious intentions. Rather, we wish to support our employees, customers, business and rights. We have been fined $14,000 by OSHA. We have made a GoFundMe for our customers to show the love and support that they’ve been begging to give us.”

Within a couple of days, the account had raised more than $8,000. As of Thursday afternoon the restaurant had raised $13,278 from 178 donors.

Not only did they use bad judgement and deserve these fines . . . they were aided and abetted by none other than Bunker Boy Boice . . . Gotta love these lawless Repuglicans. Check out their Facebook Page on May 3rd. If they delete it Osha we've got screen shots for you.

Re: SARS-CoV-2 On Oct. 16. 2014, NIH issued a BAN on gain-of-function research. During that same BAN, NIH gave a $3.7 Million grant to the BSL-4 lab in Wuhan, China, to do gain-of-function R&D, evidently in an effort to circumvent Federal laws which prohibit stockpiling offensive biological weapons. 38 months after that BAN was put into effect, NIH lifted that BAN (an OVERT ACT). And, less than 3 weeks before that BAN was lifted in December 2017, the Wuhan lab published a detailed report of their 5-year longitudinal study of bat caves located some 1,000 miles from Wuhan, China. That study confirmed 11 new viruses, in addition to the 4 they already knew about. Gains-of-function include, for example, making a virus more contagious, more lethal, and engineering a biological pathway for a virus to "jump species" (from bats to humans). Fortunately, SARS-CoV-2 is contagious, but not as lethal as intended.

Over the past weekend, we did a very detailed comparison of beginning and ending fund balances in the Douglas County CAFRs, with comparable figures in 3 x NOTICES OF BUDGET HEARING. Result: There is a total discrepancy of $68 Million; and, our Public Records Request for 10 more such NOTICES is now PAST DUE as of January 2020. (HINT: in every CAFR, ending fund balance at midnight ending June 30 is always exactly equal to beginning fund balance at midnight starting July 1: this is standard accounting practice.) So, the State is punishing a popular local restaurant, and allowing local government personnel -- suspected of major felonies -- to skate? Forging public records is a Class C felony.

The ONLY provision in the U.S. Constitution that can be suspended is the Writ of Habeas Corpus, and even that requires an Act of Congress. An Executive Order cannot suspend Habeas Corpus without legislation authorizing same. And, under the Supremacy Clause, the Oregon Constitution and Oregon State laws must yield to the U.S. Constitution whenever there is a conflict between Federal and State laws on any particular matter. This debate dates back to Ex parte Merryman (President Lincoln not prosecute the Civil War using martial law, but he did anyway). See also:

It has been well said that the suspension of the habeas corpus is a suspension of Magna Charta, and nothing but a great national emergency could justify or excuse it. The Constitution limits it within narrower bounds than do the legislative precedents in Great Britain. The power to suspend this privilege is a legislative power, and the President cannot exercise it except as authorized by law [citing Ex parte Merryman]. -- Suspension of the Writ, page 300

I think the state or city may have used a backdoor (OSHA) to fine these folks because at the time the Governor's order had expired, - ORS 433.441¹

I was in the restaurant about the time of the accusation and they were using every precaution that they and other restaurants are using today. Seems that they were made a example of not to go against they ruling class.

The Oregon Supreme Court on Friday ordered a Baker County judge to throw out a preliminary injunction that found Gov. Kate Brown’s executive "Stay Home Save Lives'' orders invalid. The state’s highest court found that Circuit Judge Matthew B. Shirtcliff relied on the wrong state law in issuing the injunction.

Shirtcliff had pointed to the public health emergency statute ORS 433.441 in finding that the governor’s executive orders violated the 28-day statutory limit.

As the state had argued, Brown relied on a different statute, ORS 401.165, allowing her to declare a state of emergency -- for reasons including public health crises -- without any time limit, the Supreme Court found. The Legislature has expressly provided that “the powers granted to the Governor by ORS 401.165 shall continue until termination of the state of emergency,''

Everyone who ate at Casey's knew the risk...and took it. I've seen no reports of casualties. No harm, no foul.

casey's actions are outrageous. they used very poor judgement. they risked employees and customers and this in a restaurant that exposes people without the corona going around. wont be going back there, the operate just on the edge of risky

Shame on Roseburg Police Cheif Gary Klopstein for reporting to OHSA for violation of Gov Brown's order then several days later he is out with 160 protesters (over the limit of gatherings) while he is NOT wearing a mask and less then 6 feet distance. What kind of message does that send to our community? Gary Klopstein needs to go now!

You've made this same comment on several different articles. Each time I've asked how you know this to be true since it is unusual for OSHA to identify the person who reported the offender. Still waiting for a response.