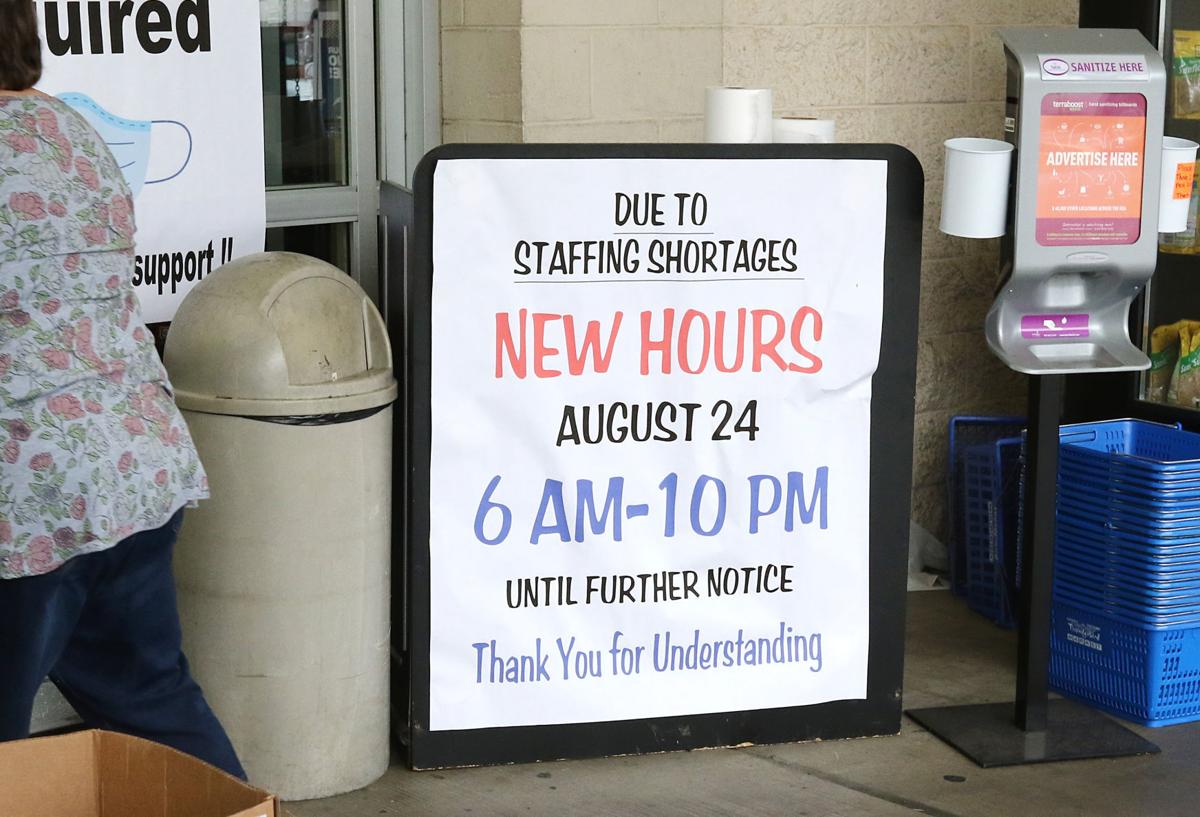 A sign posted at an entrance to Sherm’s Thunderbird Market announces temporary shortened hours due to staffing shortages on Friday in Roseburg. 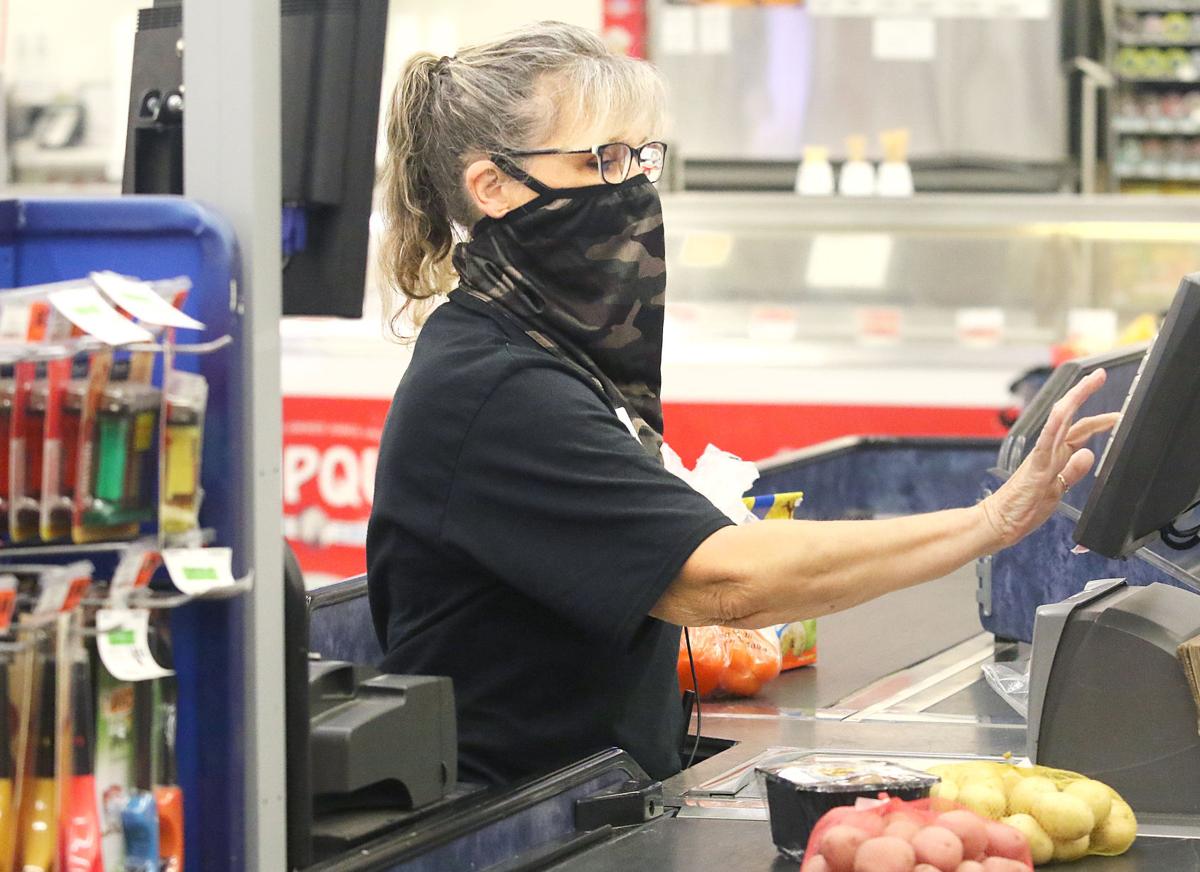 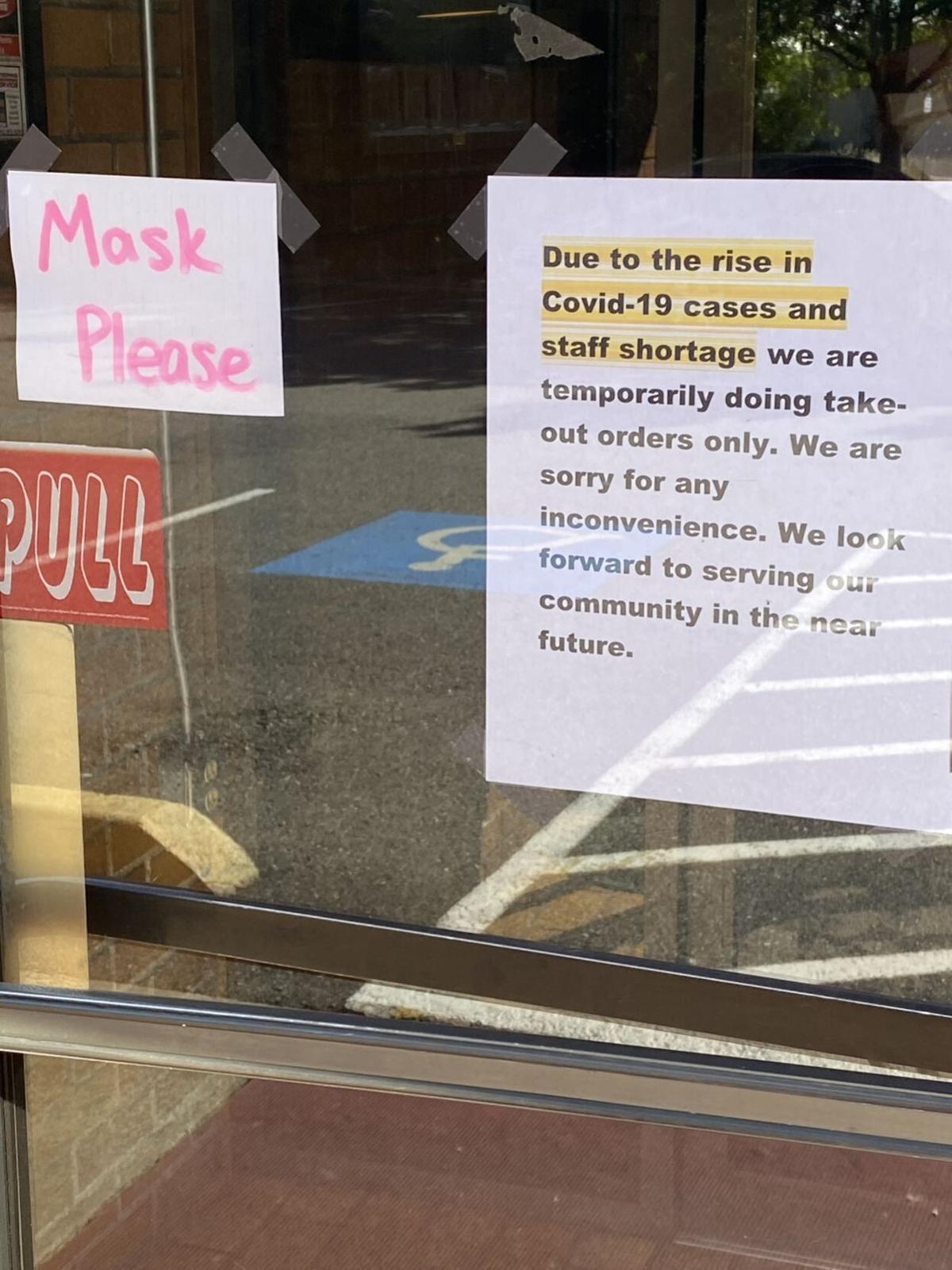 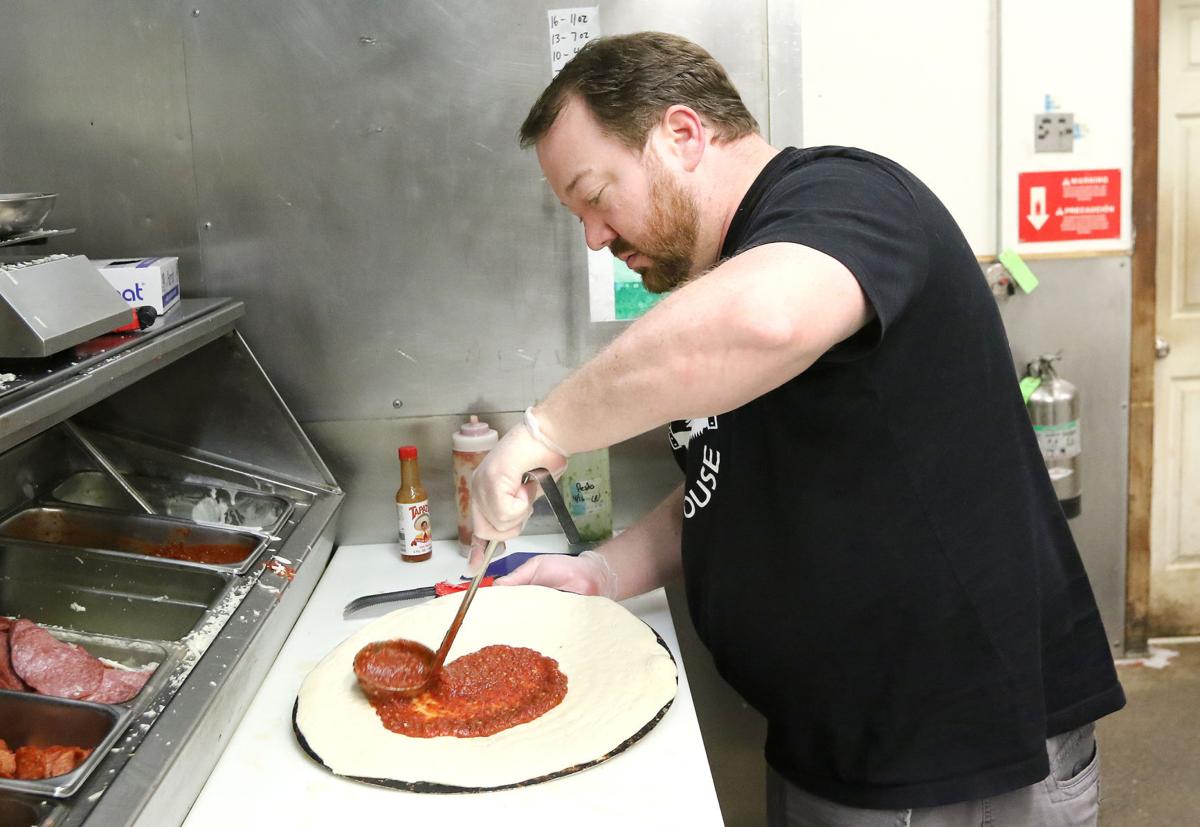 Loggers Tap House owner Sam Gross works on a pizza in the kitchen. Gross has had to get creative to deal with worker shortages.

A sign posted at an entrance to Sherm’s Thunderbird Market announces temporary shortened hours due to staffing shortages on Friday in Roseburg.

Loggers Tap House owner Sam Gross works on a pizza in the kitchen. Gross has had to get creative to deal with worker shortages.

One restaurant went to takeout only. Another had to bring workers over from a second location, which hasn’t opened yet, to help out. And a supermarket that had been open 24 hours was forced to roll back its hours, and now closes at 10 p.m.

At Brix Grill in downtown Roseburg, owner Misty Russell said she is dealing with daily staffing shortages due to employees missing work for a variety of COVID-related reasons. Those include workers testing positive, coming into contact with someone else who tested positive, or those needing to care for a family member who has tested positive.

“We are on a day-by-day basis and allowing all the flexibility our workers need,” Russell said. “We are trying to remain operational and keep jobs for the folks we do have, but things are very quiet. Understandably, this is a very tough time for our community.”

Area businesses were facing severe staffing shortages long before this recent spike in COVID cases, and some of it had nothing to do with the coronavirus. Economists say the retirement of baby boomers has left a national shortage of workers — there are 10 million job openings and an available labor force of eight million, one study found. The situation is similar in Douglas County.

Additionally, the disruption in college education for the past year means the normal group of college workers who could fill some of these vacancies are not available. In cities like Eugene, for example, students are not in town due to remote learning and therefore a large group of potential workers is not available to fill positions in bars, restaurants and fast food places.

Then there is COVID, which has magnified the local labor shortage and added to it. The on-again, off-again nature of the restrictions put in place by the state has made it difficult to maintain adequate staffing levels for businesses, and caused many to close. Schools being closed added a further burden on parents who may not be able to afford child care. And supplemental unemployment checks provided by the federal government made it more attractive for some workers to stay home, at least temporarily.

That has caused an even greater shortage of employees in the area and caused local businesses to come up with creative solutions to deal with the shortage. The employee shortage, and ways of dealing with it, are especially noticeable in retail operations, such as restaurants and markets.

“I always maintain that restaurant operators are entrepreneurs,” said Greg Astley, a spokesperson for the Oregon Restaurant & Lodging Association, which represents about 2,000 restaurants and 1,200 hotels in the state. “They’re innovative and creative and they find ways around these issues. It’s not always pretty, but they find ways to solve problems.”

CUTTING BACKOne of the most common ways restaurants have been dealing with the shortage is to cut back hours and services, he said. A number of area restaurants, including Kowloon restaurant at 2686 NE Diamond Lake Blvd., have gone to take-out service only.

“Due to the rise in COVID-19 cases and staff shortage, we are temporarily doing take-out orders only,” a sign on the door of Kowloon’s explained. “We are sorry for any inconvenience. We look forward to serving our community in the near future.”

Astley said he knows of a well-known restaurant in Newport that would normally be open from 6 a.m. to 10 p.m. but now operates from 8 a.m. to 4 p.m., due to staffing shortages.

“Which means they’re missing out on some significant revenue from both breakfast and dinner. It’s a huge problem,” he said. “We’re also hearing about restaurants closing on Mondays because they have to give their staff a day off. They have to close to give them a day off.”

Astley also said that even restaurants that appear to be doing well could be struggling.

You see a line out the door so you think they’re doing well, but inside they’re not at full capacity because they don’t have the staffing,” he said. “There’s a line outside the door because they can only have so many people inside.”

Sam Gross, the owner of Loggers Tap House in Roseburg, came up with a unique solution to his staffing shortage. Gross is about to open a second Tap House in Winston, and he brought some of the new staff he hired for that restaurant to temporarily work at the Roseburg establishment, he said.

Even with those workers, Gross said that for the first time he had to close the restaurant for lunch Monday and Tuesday of last week because of a lack of staff.

“COVID affects our staffing whether someone tests positive, is waiting for results, or has family members that are positive,” Gross said. “Losing people for 10 to 14 days at a time definitely hurts our ability to operate and eliminates profitability because when we are paying sick pay and paying someone to cover the team member that is out, there isn’t enough margin to be profitable.”

HELP ON THE WAY?The shortage isn’t limited to restaurants. Sherm’s Thunderbird Market, located at 2553 NW Stewart Parkway in Roseburg, normally operates around-the-clock. But now it closes at 10 p.m., due to staffing shortages.

The store hired five new employees last week, but the roughly 170 employees still puts it short of the 190 workers the store would like to have, said Bob Ames, general manager for Sherm’s Thunderbird Market, Inc.

“We have never seen the shortage of applicants like we have had this year,” Ames said. “We currently have over 20 open positions, from full-time produce clerks to part-time courtesy clerks.”

To fill in the gaps the market has brought in employees from stores in Klamath Falls and Medford to work at the Roseburg store, Aimes said. They have also gotten some help from some of the suppliers, such as in produce, he said.

“We would still really like to get some more people hired, but the labor market is very tight,” Ames said.

Astley, with the Oregon Restaurant & Lodging Association, said there may be some relief on the horizon in the form of federal funding.

The American Rescue Plan Act, which passed this spring, established a $26 billion fund to help restaurants and other eligible businesses keep their doors open. About 1,000 restaurants in Oregon received money from that program, but many more did not, Astley said.

Astley’s group and others are asking Congress to replenish the program with another $40 billion in funding, money which would go to restaurants that did not get funds from the act the first time around.

Whether that push proves successful or not, Astley said it’s important that the general public understand the huge challenge restaurants and other businesses are facing due to COVID-related staffing shortages.

If nothing else, show some compassion, he said.

“It’s one of those difficult situations. The operators don’t want to be short-staffed, but a lot of it is out of their control,” he said. “They’re doing the best they can given the situation they’re in. Just be kind.”

Good article. You tippy toed all the way around the real reason for the problem. Peter will be proud of you 👏.

It's a sad state of affairs, but good to see people being creative in finding ways to carry on.

In hindsight, Sam probably shouldn't have invested time and money into a second location during a pandemic.