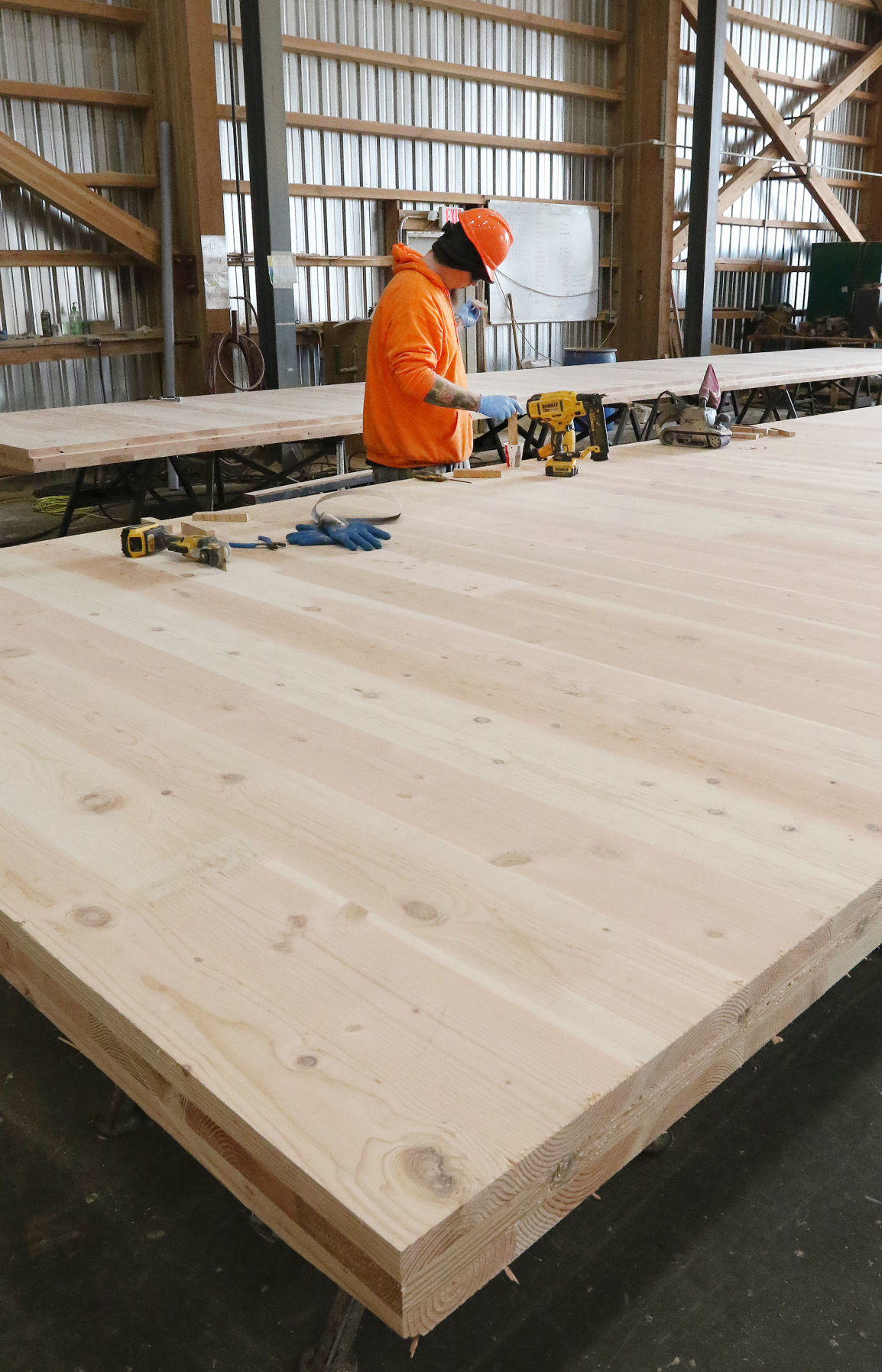 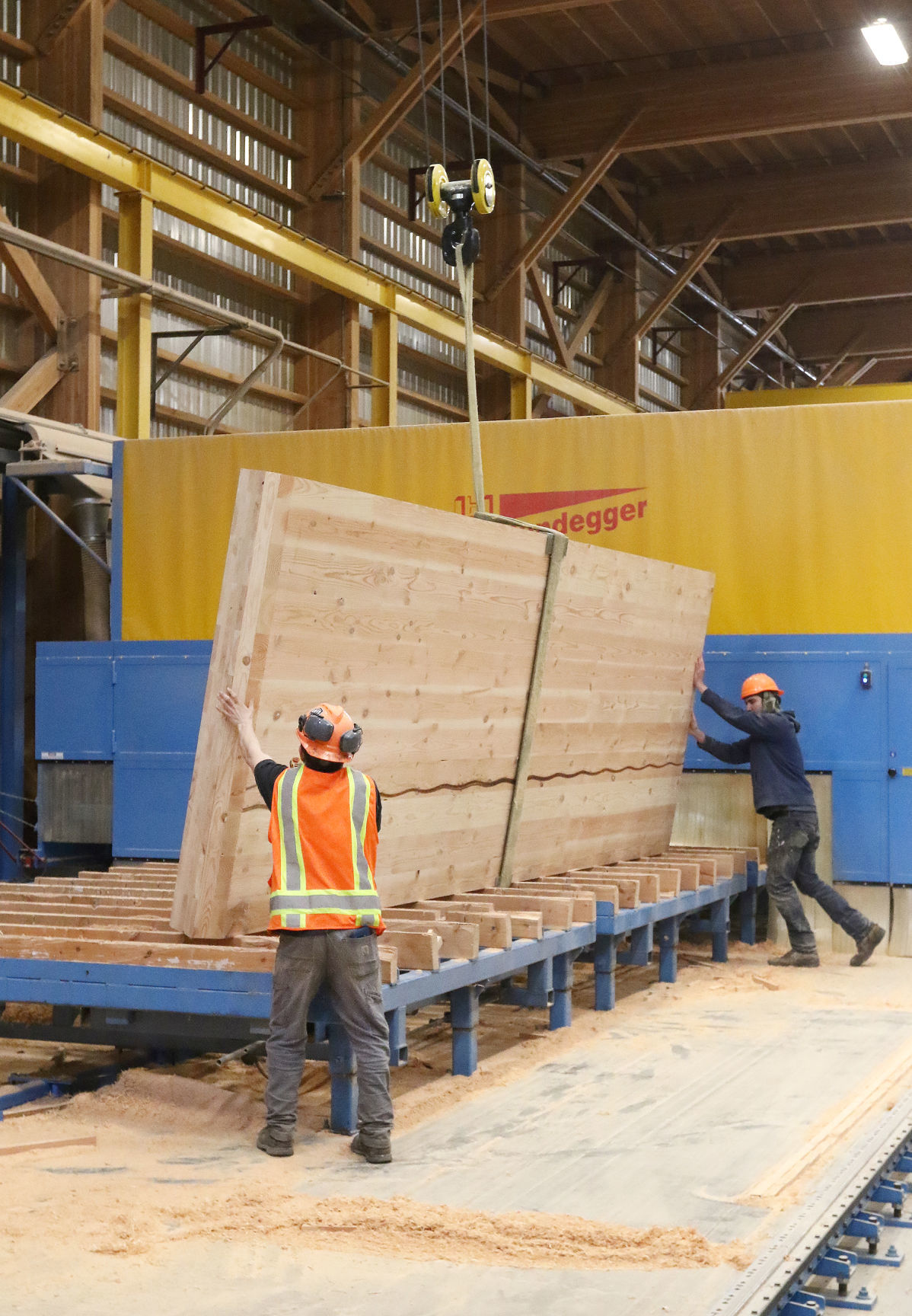 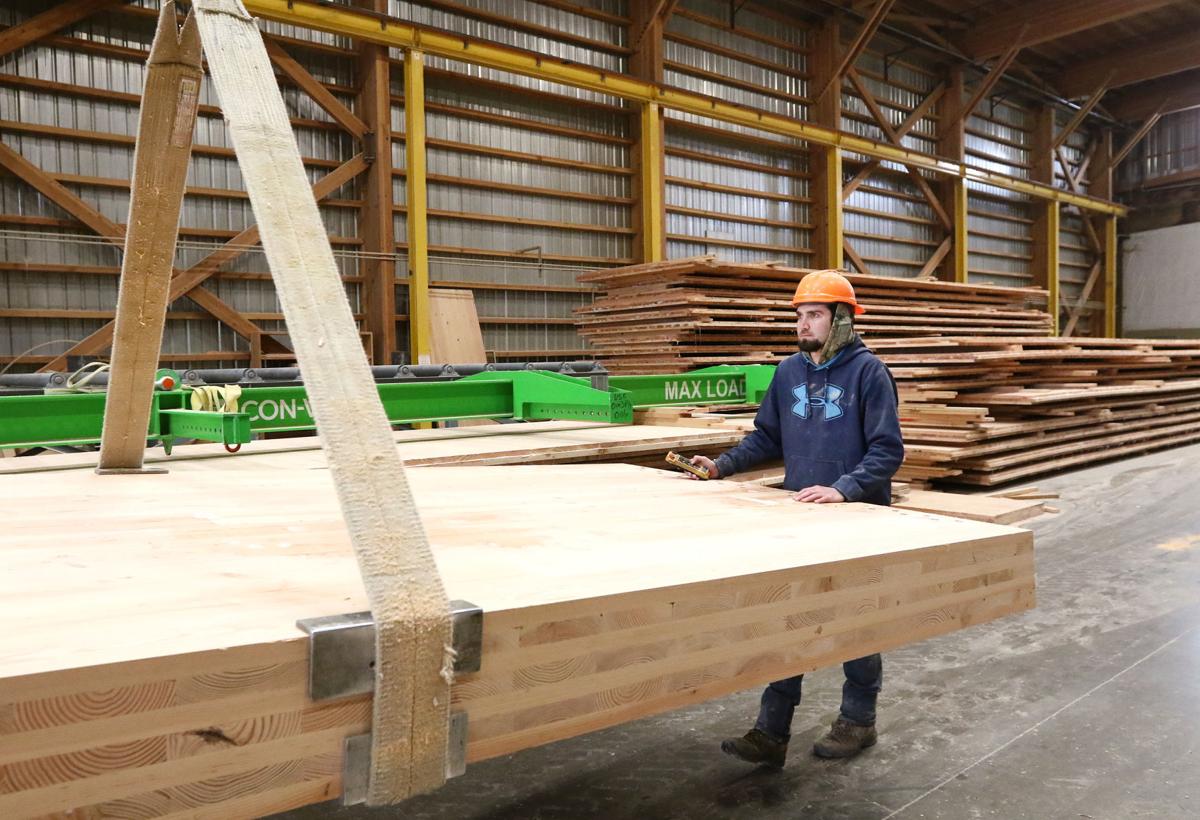 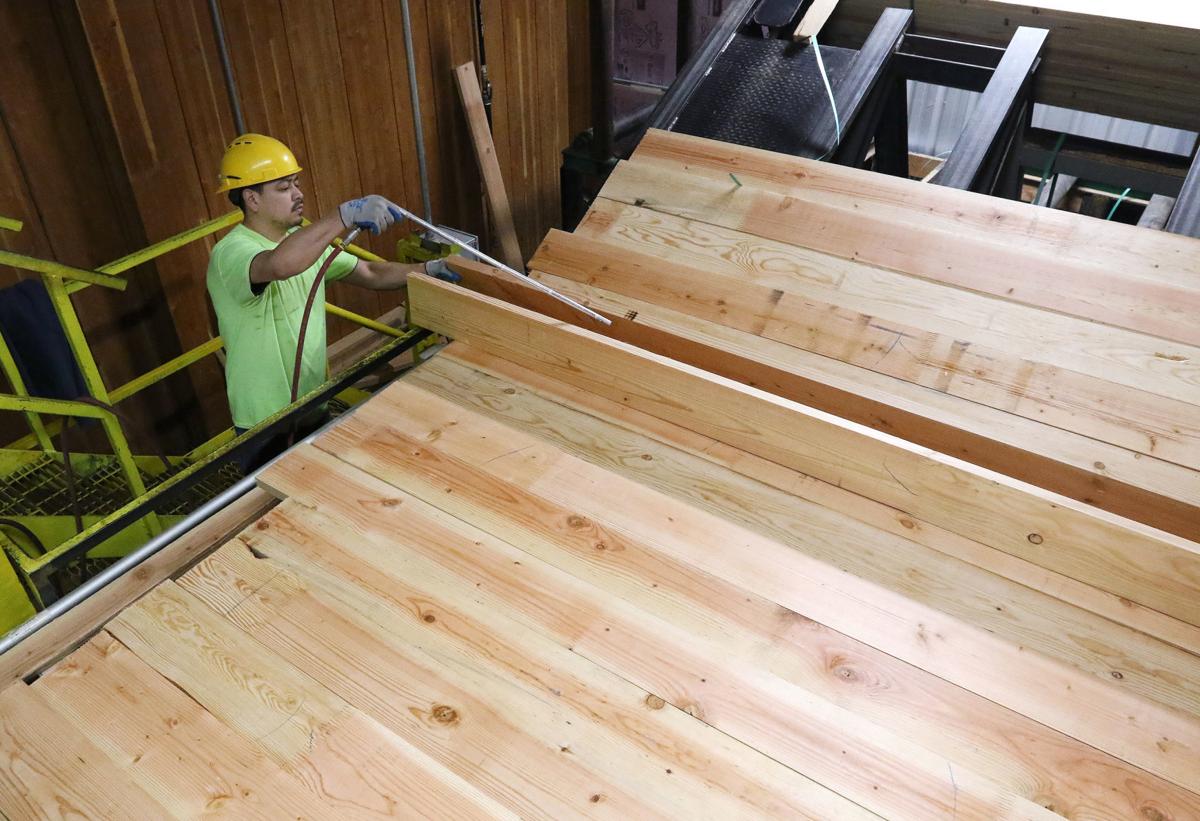 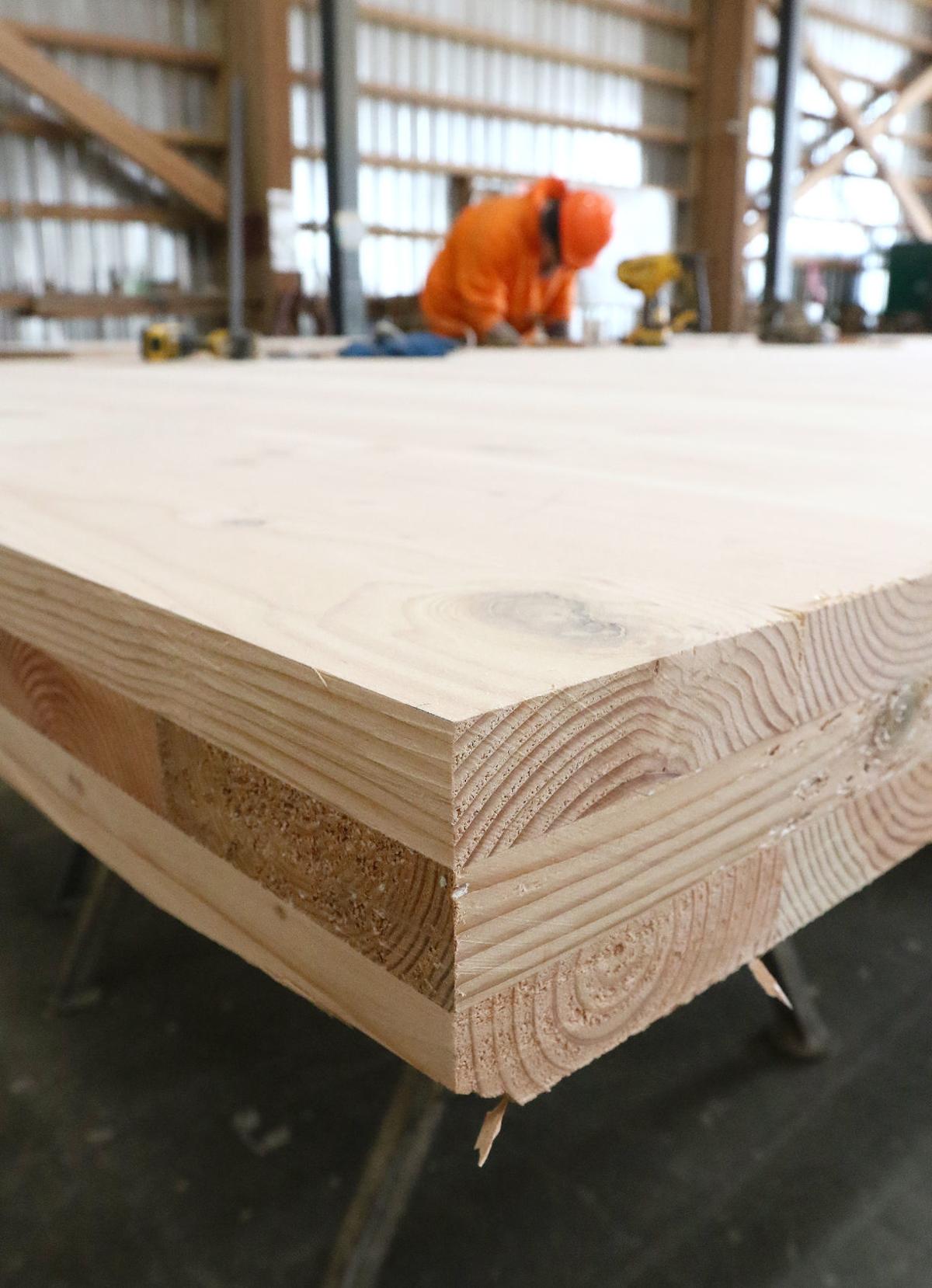 A D.R. Johnson Lumber Company employee works on a cross laminated panel at the Riddle plant on Jan. 22.

A D.R. Johnson Lumber Company employee works on a cross laminated panel at the Riddle plant on Jan. 22.

The D.R. Johnson Lumber Co. in Riddle has a rich history that dates back nearly 70 years. Yet it is the company’s ability to look forward that sets it apart from other timber companies and has the entire forest products industry taking notice.

D.R. Johnson is a pioneer in the emerging field of “mass timber,” which involves the use of adhesives to create large beams, panels and other wood products that have been shown to be as strong as concrete and steel. D.R. Johnson makes cross-laminated timber, or CLT, that is being used in new and exciting ways across the country.

CLT has only been used in the U.S. for a few years, but already it is changing the way architects, developers and builders think about their work. The new products have coincided with significant changes in the construction industry that have accelerated their reach.

Those changes include federal legislation to fund research into these new products; new laboratories to research CLT and other mass timber products; new building codes that allow for high rise buildings made of wood; and new architectural approaches using wood.

“I would say that the growth of mass timber products is very significant. People refer to it as the timber Renaissance,” said Evan Schmidt, outreach coordinator at the TallWood Design Institute, a joint venture between Oregon State University and the University of Oregon that researches mass timber.

“It’s just a resurgence in interest in wood products, and it provides more opportunities for design. We can do things with buildings that we couldn’t do before.”

D.R. Johnson is at the forefront of this movement. In 2015 it became the first company in the nation to be certified to manufacture CLT. D.R. Johnson has two dozen projects — ranging from a 1,500 square-foot student lounge on Western Oregon University to a 750,000 square-foot civic center in Southern California — that features its work with CLT.

“This is a big step forward in the industry,” said D.R. Johnson sales manager Todd Black. “You’re making a product that’s unique, that fits what the customer is looking for.”

Johnson passed away in 2010 at the age of 83. Today the company is run by his daughters — Valerie Johnson, president; and Jodi Westbrooks, vice president.

Valerie Johnson said her father was always looking for new ideas and technologies. When the family took the occasional road trip, Johnson said, her father would invariably spot a smokestack and within a few minutes he would talk someone into giving him a tour of the mill.

D.R. Johnson founded Riddle Laminators in 1967, and over the decades it became a leader in glue-laminated timber, known as glulams. A glulam is a beam made with multiple layers of solid wood lumber bonded together with high-strength adhesive. With glulam, all of the “lams” are laid parallel to one another. This is similar, but different, to CLT.

CLT consists of either 3, 5 or 7 layers, with each layer oriented 90 degrees to the previous layer that is bonded using adhesives to form large-scale panels. While CLT has been used in Europe for more than 20 years, it just recently caught on in the U.S. for a variety of reasons, including longstanding building codes that restricted its use.

D.R. Johnson initially got involved with CLT in 2014 after OSU officials saw what was going on in Europe and wanted to try it here. Those officials organized a meeting with researchers, architects and industry producers — including D.R. Johnson — to discuss the market potentials of CLT.

In many ways, D.R. Johnson’s experience with glulams helped it turn almost seamlessly to the emerging field of CLT. Valerie Johnson said she was confident her staff could make the transition from glulam to CLT.

“We raised our hand and said what is it going to take,” she said. “We figured they just want us to glue wood in a different configuration. Boy were we naive. But I think we’re proud that we did it.”

Company officials traveled to Europe to see how mass timber/CLT production was done there, then came back to Riddle and began producing test panels.

Part of the appeal of CLT is how the process, including shaping the wood and cutting it to distinct specifications, allows for individualized, custom-made beams and panels.

“That kind of custom work is in the DNA of this company,” Black said.

In 2015, D.R. Johnson created D.R. Johnson Wood Innovations, and became the first certified manufacturer of CLT in the nation. The company bought a cross-laminated timber press, which presses the layers of panels together after the adhesive is applied.

While most of the machinery used to make tall timber is manufactured in Europe, D.R. Johnson’s timber press was made in Washington by the company USNR — which made the first such presses in the U.S.

In 2018, D.R. Johnson Wood Innovations completed its new production facility for CLT, using its own product.

“Our own guys built this building,” Black said during a recent tour of the facility. In addition to the USNR press, the plant features a European automated panel-cutting machine that produces beams and panels to exact specifications.

“We used to have to do it all by hand, using hand sanders and saws,” Black said. “Now it’s all automated. It’s got to be perfect or it won’t work.”

The computer-driven machine is so detailed that it can write a name in cursive, he said.

“That’s what allows us to be so accurate,” Black said. “You’re making a product that’s unique, that fits what the customer is looking for. It’s a big step forward for the entire industry.”

That ability to produce walls, floors and staircases with all the doorways and windows already cut out makes CLT user-friendly and cost-efficient, Black said.

“You’re selling them almost like Legos, selling them a kit that can be assembled,” he said. “Since it can be built so quickly and to exact specs, it saves a lot of time and money in the construction, which brings the overall costs down.”

CLT was given a boost in 2018 with the passage of the Timber Innovation Act, which financed research, education and technical assistance to increase the use of “innovative” wood products such as CLT.

Also in 2018, Oregon became the first state in the nation to implement building codes that allow for wood-framed buildings to scale up to 18 stories tall. Washington has also changed its building codes along those lines.

The new lab houses the TallWood Design Institute, a partnership between Oregon State University’s College of Forestry and College of Engineering and the University of Oregon’s College of Design. The Institute houses about two dozen professors dedicated to studying all aspects of mass timber products, including their ability to withstand fires and earthquakes.

Schmidt said CLT and mass timber are prompting changes and coalitions that few would have thought possible. For example, because mass timber is considered environmentally friendly yet also requires a steady supply of timber, it has forged unique coalitions among the forest product industry and conservationists, Schmidt said.

“In a weird way CLT has brought together stakeholders from across the spectrum,” he said. “There are a lot of different types of people who have a stake in this.”

“D.R. Johnson has been at the forefront of this movement back to using wood products, and while the Northwest is kind of the epicenter, it’s taking off everywhere. You’ve got to give them credit.”

“Nobody else is ever going to be able to say they were the first ones to do this, because we were. Now we have to make sure we stay at the head of the pack,” Johnson said. “This gave us an opportunity to create some new jobs, and I think some pride. Our people are proud of what we’ve done. We’re excited to be a little part of that story.”

A dated office building in Portland was transformed into a collaborative space that reflects the mission of this environmental non-profit. It features a community room and a roof garden terrace.

A stand-alone, two-story, 57,000 square-foot building at Western Oregon University that is considered unique for its feature use of CLT, including in the two lounges at the two main entrances.

A 6-story office and retail building n Portland. Its structure is made of glued laminated columns and beams, and CLT floors.

A two-story, 19,950 square foot building in Hayward, California, which includes a greenhouse and teaching support spaces.

Cross-laminated timber (CLT) is a large-scale, prefabricated wood consisting of several layers stacked in alternating directions, bonded with adhesives, and pressed to form a solid, rectangular panel. It is lightweight yet very strong, with superior acoustic, fire, seismic and thermal performance.

Finished panels are typically 2-10 feet wide, with lengths up to 60 feet and thickness up to 20 inches. Widths up to 18 feet and lengths up to 98 feet are possible, but uncommon.

CLT panels are fabricated and fully manufactured before reaching the job site. The machinery used is capable of making high-precision and complex cuts in minutes to the exact size, including door and window openings. Panels are stacked in the exact order to how they should be installed, making them fast and easy to install. The panels can be used for walls, roof, and floor.