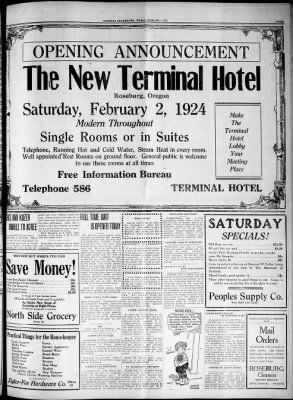 An ad for the Terminal Hotel in Roseburg, from 1924.

It will be a bit later than originally planned, but the Five Guys Burgers and Fries should be opening within a couple of weeks.

The restaurant at 1500 NW Mulholland Drive is shooting for a Nov. 4 or 5 opening, co-owner Mel Garges said. The restaurant has held a couple of job interview events at the Hampton Inn & Suites, located adjacent and just north of Five Guys, and has hired about two dozen people, he said. They plan to have about 40 employees total.

The restaurant pays above minimum wage depending on qualifications and experience, and offers weekly bonuses and tips, Garges said.

“Five Guys has the best fries in the nation along with some of the best hamburgers and hot dogs and there is no extra charge for toppings,” he said. “Everything is fresh daily as there is not a freezer in the house and our buns have zero preservatives.”

The Five Guys will occupy 2,500 square feet of a nearly 6,400 square-foot building going up next to the Hampton Inn & Suites. The restaurant will feature indoor and outdoor seating.

A second tenant in the building will be Charter/Spectrum, which will occupy 2,500 square feet of space next to Five Guys, Johnson said. The third space in the building is on the west end, covering 1,375 square feet, and the occupant for that space has not been announced yet.

Garges, along with partners Dan and Kristy Zakour, own Southern Oregon Burgers and Fries, LLC. That limited liability company owns five Five Guys in Southern Oregon, plus the one opening here.

Making something old newAnother property that is getting ready to open soon is the Valley Hotel in downtown Roseburg. I got a chance to take a tour of the historic former hotel, located at 950 SE Washington Ave., with owner Magnus Johannesson, and it is really quite stunning.

The building dates back to 1885, when the bottom two floors were built, and the third floor was added in 1910. The original name was the Valley Hotel, but at some point it was renamed the Terminal Hotel, Johannesson said. And get this — a corner of the building was open so buses could drive through and drop passengers off essentially inside.

The building has 34 units and Johannesson is remodeling them into dorm-like apartments. Each room will have wood floors, a kitchen counter with a sink, a refrigerator and a bunk bed. There will also be a main lobby and common areas.

It’s incredible to see the transformation from a vacant, decaying building into something so modern and attractive. Johannesson has some historic photos, including an ad for the Terminal Hotel in Roseburg dating back to 1924 and a receipt from 1942 year for a week’s stay in the hotel. The tab? $25.

Johannesson said he hopes to finish the work and start renting out the units by the end of the year. He said he hasn’t settled on the rent yet but is looking in the $500 a month range, plus utilities. If that apartment complex fills up, which I suspect it will, downtown could become alive again.

Back to Roseburg Town CenterAnd speaking of downtown Roseburg, there are some changes underway for the Downtown Roseburg Association, namely a change of name and location. The DRA decided to go back to its old name, Roseburg Town Center. There were several reasons for the name change, the biggest being that the nonprofit wanted to make a fresh start and put the challenges of the last two years behind it, according to a report submitted to the city last month.

The former DRA also moved, or more accurately is in the process of moving. The association relocated its office from 723 SE Main St. to 612 SE Jackson St. in May, but has yet to open to the public. The RTCs only staff member, Executive Director Susie Johnston-Forte, went on furlough at the end of March, and remains on furlough for the foreseeable future, until it is safe to be open, according to its report to the city.

It’s been a tough year for RTC, with COVID-19 virtually shutting everything down. The DRA/RTC had 11 events planned for this year, but all but a handful were cancelled. That included the Summer Steelhead Concert Series, which was going to be three outdoor concerts downtown that the DRA/RTC had expected to be its standout events for the year.

The RTC is scheduled to give a presentation on its work to the Roseburg City Council on Monday night. The remote meeting will be aired live on the City of Roseburg home and Facebook pages.