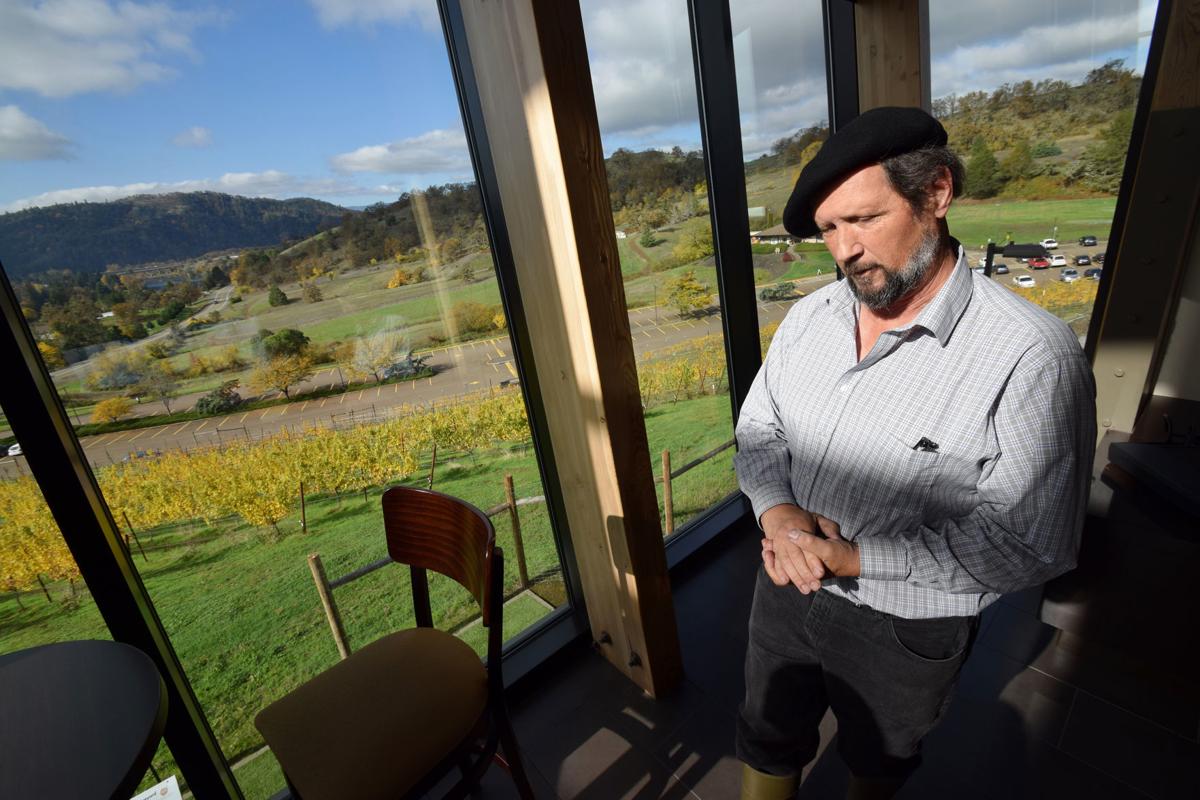 Andy Swan, director of the Southern Oregon Wine Institute, talks about his program in the Lang Teaching, Learning and Event Center at the Unpqua Community College campus in Winchester. The wine industry in Douglas County is continously growing, with 38 wineries encompasing 3,600 acres of vineyards. 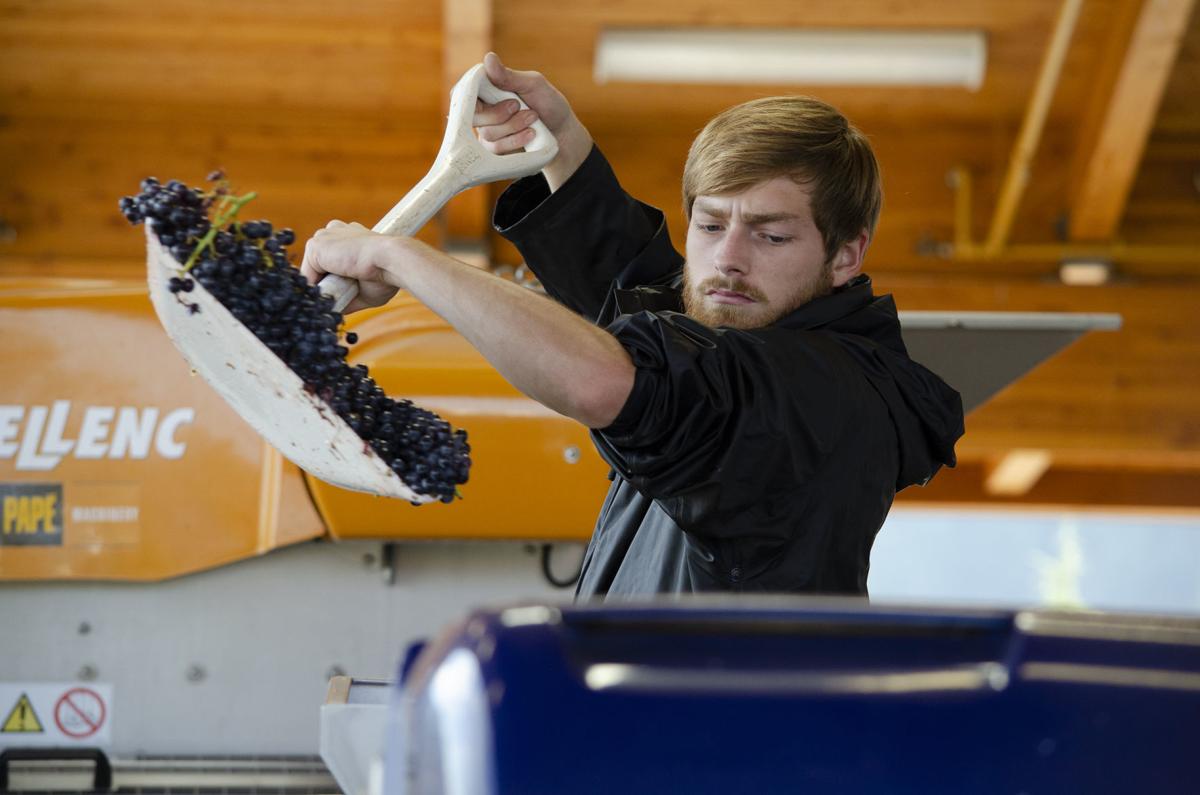 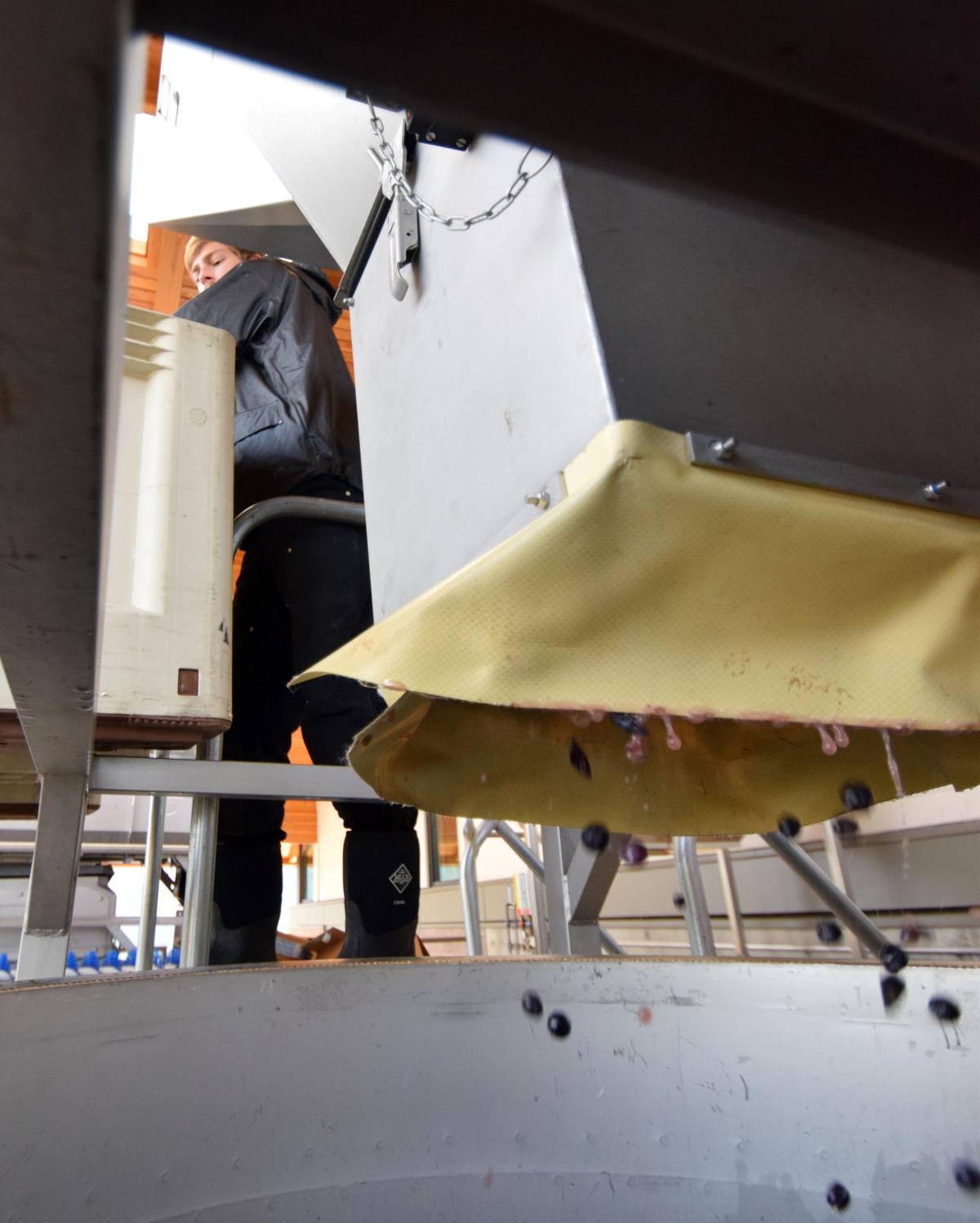 Alex Nolet, an employee for Henry Estate Winery, feeds grapes belonging to Umpqua Community College student Toni Mulbacher into a de-stemmer at the Lang Teaching, Learning and Event Center at the Winchester campus on Wednesday. 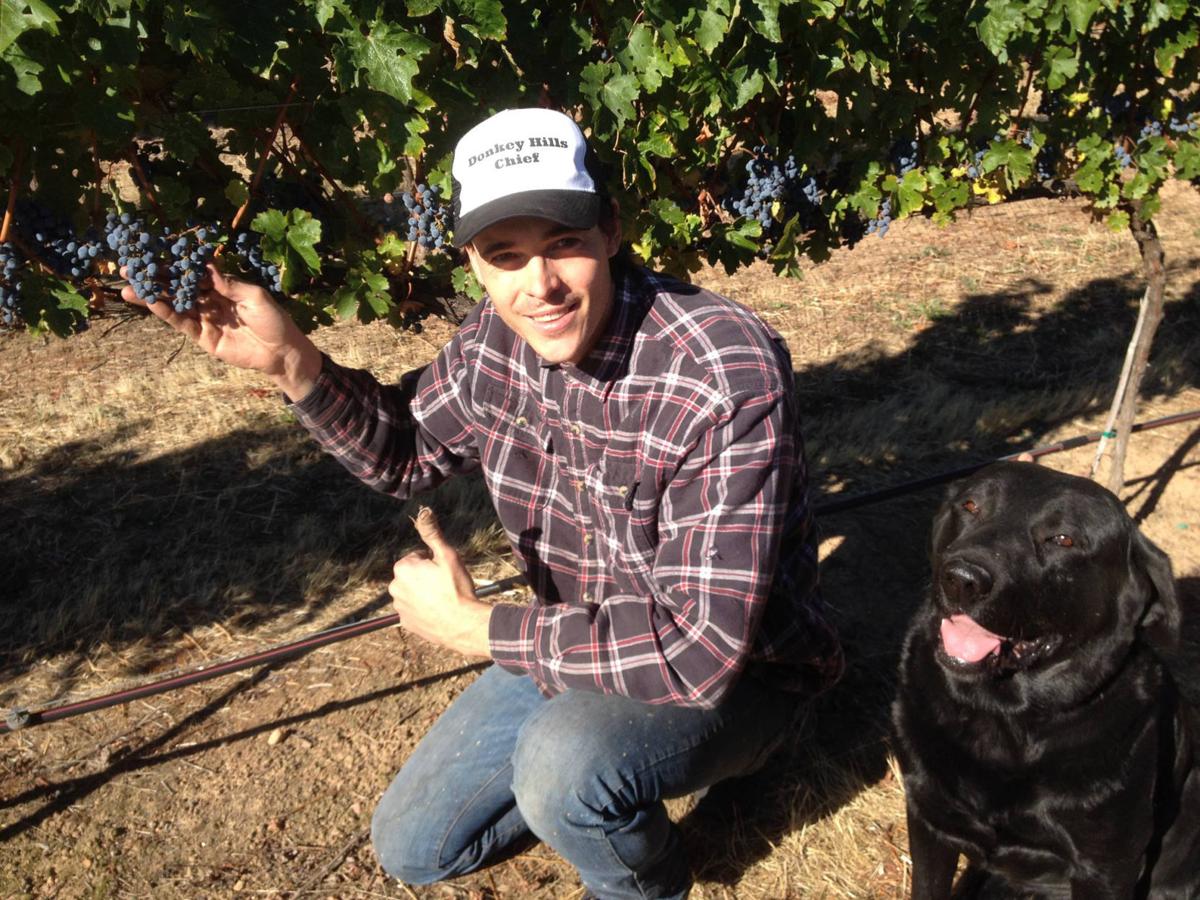 Toni Muhlbacher is a student learning about winemaking at Umpqua Community College. 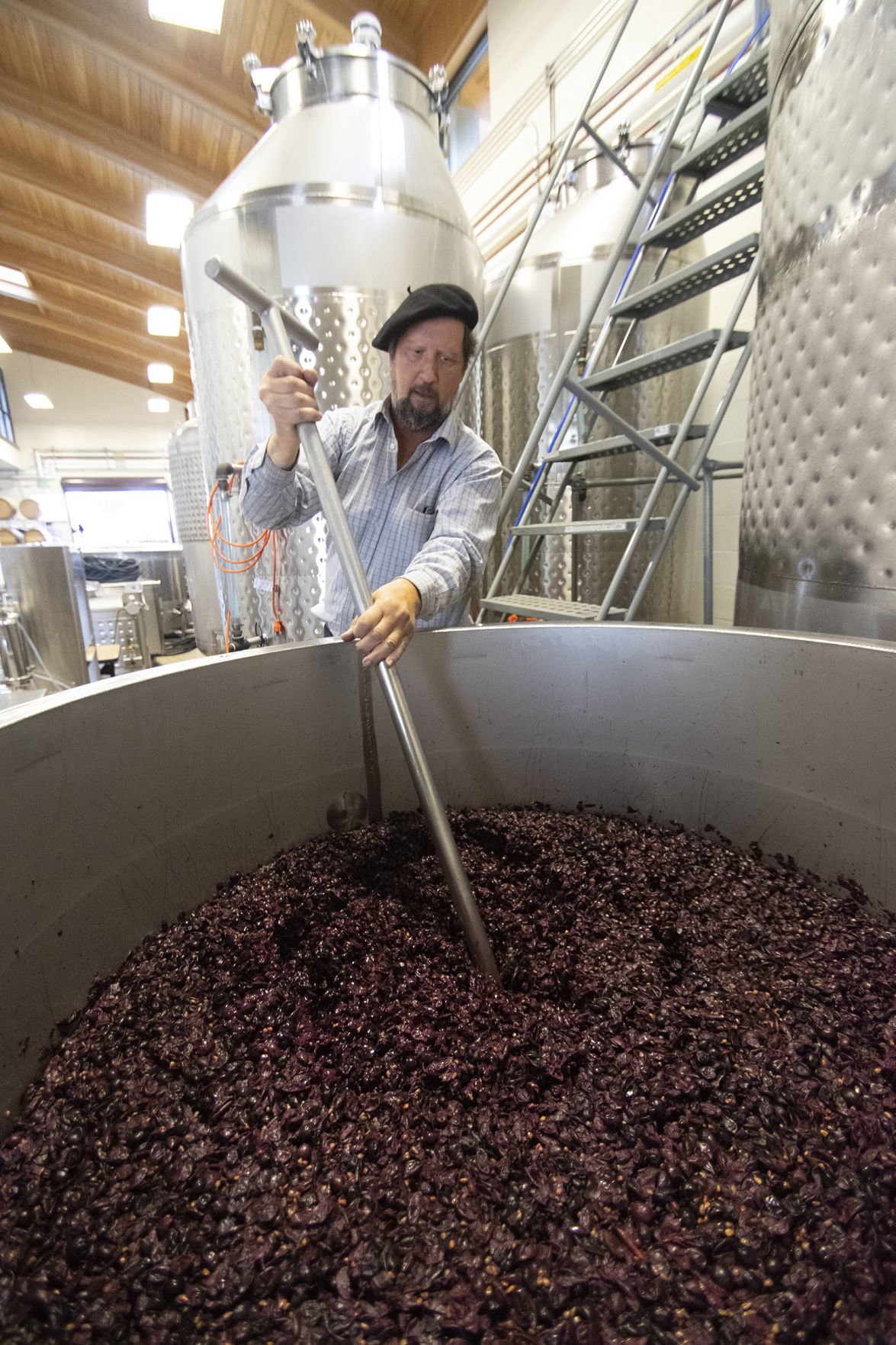 Alex Swan churns through tempranillo grapes in a fermenter in the Lang Learning, Teaching and Event Center on the Umpqua Community College campus in Winchester on Wednesday.

Andy Swan, director of the Southern Oregon Wine Institute, talks about his program in the Lang Teaching, Learning and Event Center at the Unpqua Community College campus in Winchester. The wine industry in Douglas County is continously growing, with 38 wineries encompasing 3,600 acres of vineyards.

Alex Nolet, an employee for Henry Estate Winery, feeds grapes belonging to Umpqua Community College student Toni Mulbacher into a de-stemmer at the Lang Teaching, Learning and Event Center at the Winchester campus on Wednesday.

Toni Muhlbacher is a student learning about winemaking at Umpqua Community College.

Alex Swan churns through tempranillo grapes in a fermenter in the Lang Learning, Teaching and Event Center on the Umpqua Community College campus in Winchester on Wednesday.

The view from the tasting room is postcard perfect. On one side there are acres of vineyards crawling up a gentle hill. Turn around and the scenery is even more picturesque — miles of rolling mountains showing off their autumn colors.

Inside the tasting room visitors are treated to more than a half-dozen wines from the region, including Pinot Gris, Tempranillo and a Cabernet Sauvignon/Merlot blend.

The scene could be found at any number of wineries in Napa Valley, the Willamette Valley, or the Umpqua Valley.

Like the tasting room, the SOWI program is unique. Now starting its second decade in operation, SOWI has sent scores of graduates out to work in vineyards, tasting rooms and wineries across the state. A number of SOWI graduates have even started their own winemaking businesses.

“For me what’s really great about it is you get out of your comfort zone, you learn new things and have discussions with other students there,” said Toni Muhlbacher, who is set to get his Associate of Applied Science (AAS) degree in Viticulture & Enology following the winter term. “It opens your mind and you start to realize how little you know about the wine world. You start working in a winery and think you know it all, then you realize that’s not the case.”

The program is overseen by SOWI director Andy Swan. Like the tasting room, the SOWI curriculum and the program at large combine several components of the winemaking industry. SOWI produces its own wine — five varieties grow on five acres onsite — and sells it at the tasting room, which is open to the public on Saturday’s and also hosts events. It also provides technical expertise and state-of-the-art equipment to help students and wineries produce their own wines.

And then there is the actual educational component, which Swan calls a “hybrid” approach — online classwork combined with several daylong, in-person sessions. The program is set up that way because most of SOWI’s students — enrollment stands at about three dozen per term, Swan said — are professionals working fulltime while doing classwork.

“We designed it to make it easy to attend,” Swan said. “Much of the classwork is outside working in the winery or vineyards, hands-on, getting dirty, dragging hoses. That way the employers get a much better employee, one who is already used to using the equipment.”

SOWI was established in 2008, just when the Oregon wine industry was about to take off. At the time SOWI was launched there were about 275 wineries in the state; today there are just under 800. Those wineries accounted for just over $600 million in sales last year, according to a report by the Oregon Wine Board, a state agency that supports and tracks the wine industry.

Douglas County has experienced a similar growth, with about a dozen wineries a decade ago, compared to nearly three dozen now.

“The industry is growing exponentially right now and I don’t see it slowing down anytime soon,” said Swan, who has been director since 1916.

One attractive aspect of the program for students is the array of professional grade equipment SOWI has onsite, Swan said. As an example he points out one heavyweight piece of machinery that uses an optical scanner to separate the grapes from unwanted debris. The machine costs $300,000 and is one of only two in Oregon, he said.

“The reason we have all this technology is we’re trying to show our students emerging trends in the industry,” Swan said. “Basically we’re serving the industry by being here.”

SOWI not only produces trained employees for the industry, but also lets students use the program’s equipment to produce their own wines — something Swan said no other school in the country he knows of allows.

One former student who took advantage of that opportunity is John Reger, who graduated from SOWI in June with an AAS degree. Reger previously graduated from Oregon State University with a degree in forestry and worked in the agriculture industry for decades, including years growing Christmas trees.

Reger grows Pinot Noir and Chardonnay grapes on his Boydog Ranch and Vineyards in Wilsonville. He released his first vintage in March, consisting of about 3,600 bottles of Pinot Noir. He credits SOWI – especially it’s “state-of-the-art” equipment and “top of the line”instructors, for helping get his winery off the ground.

“The opportunity SOWI has to offer is so understated. There is just not enough appreciation of it,” Reger said. “It’s one of the premiere facilities in the region. You’re not going to find too many wineries that have what SOWI does. What a great deal.”

Reger also said one of the lasting benefits of SOWI has been the relationships he has formed with other students in the program. There are about a dozen such students who speak with each other regularly, including several who have their own wineries, Reger said.

“We’re all in the same boat. All of us are heavily invested in the industry and we all received the same great education from Andy and SOWI,” he said. “That’s priceless in my book.”

Like Reger, Toni Muhlbacher also said he likely would not be a winemaker were it not for his experience at SOWI.

Muhlbacher moved from Southern Germany to Southern Oregon to learn the wine business. He’s due to graduate following the winter term with an AAS degree.

Muhlbacher did his classwork at SOWI while working fulltime at Del Rio Vineyard, east of Grants Pass. That work/school split was common among his SOWI classmates, he said.

“That’s the beauty of the program, you can do both. Go to school and work fulltime,” Muhlbacher, 42, said. “You need the hands-on experience as well as the theory. It’s almost like a German apprenticeship.

The classwork also touches on the business side of winemaking, including developing marketing strategies. One class project required Muhlbacher to put together a business plan for the wines he hoped to produce. As a result he now has a winery name, Donkey Hills, a web site and a logo for his wines.

He is using the facilities at SOWI to produce two wines: a white Reisling varitial he plans to release next spring or summer and a red Cabernet Sauvignon, which should be ready for release in about three years.

Muhlbacher has already produced small batches of the Cabernet, including a few batches he gave to his mother-in-law. Unbeknownst to him she snuck some into a prestigious wine-tasting in Bordeaux. The wine was a hit with the judges, who gave it several scores in the low 90s — anything above 90 is considered outstanding — and touted its potential to improve over the next decade.

“That’s pretty cool for the first vintage ever,” Muhlbacher said.

Two of UCC's biggest campus jokes...the Culinary Arts Program and the Southern Oregon Wine Institute. The public has been deceived from the beginning.