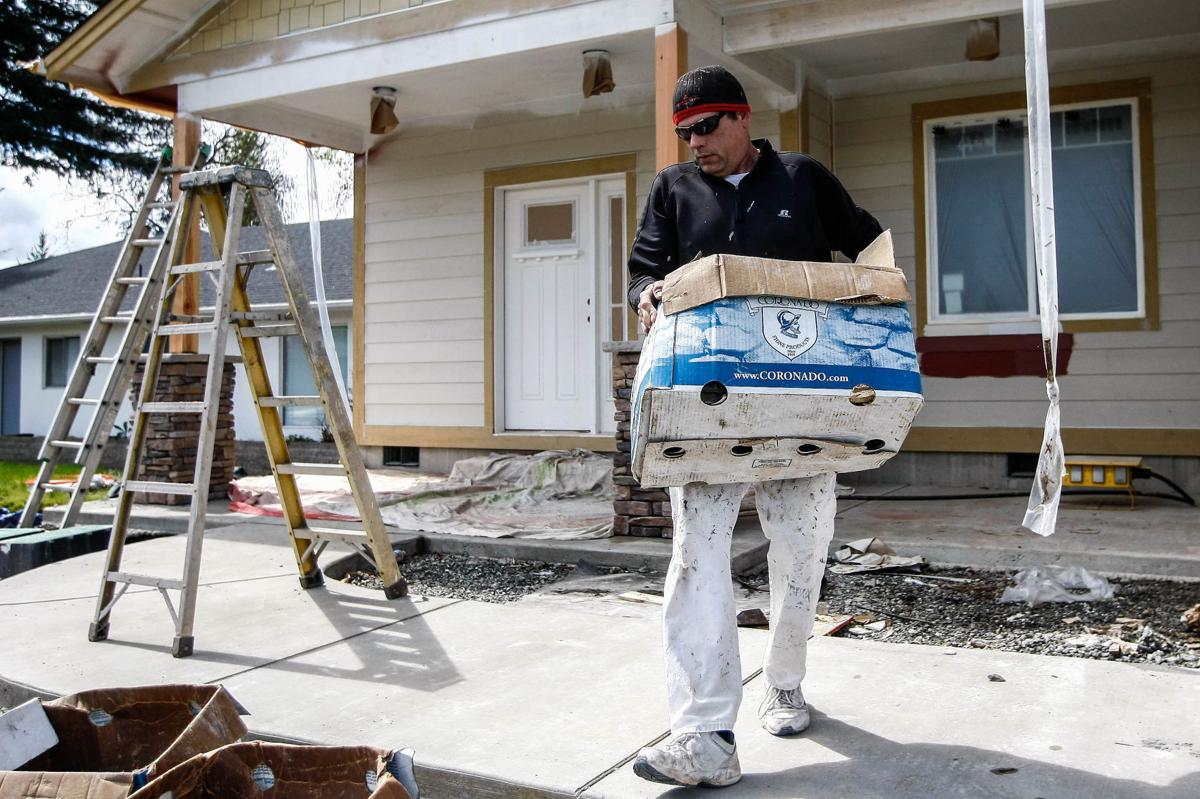 Tony Edwards, a painter for Shelby & Miguelena Construction, carries debris from a job site in Roseburg in 2017. After the 2007 housing market crash, many skilled workers left Douglas County to find work elsewhere, placing people such as Edwards in high demand. 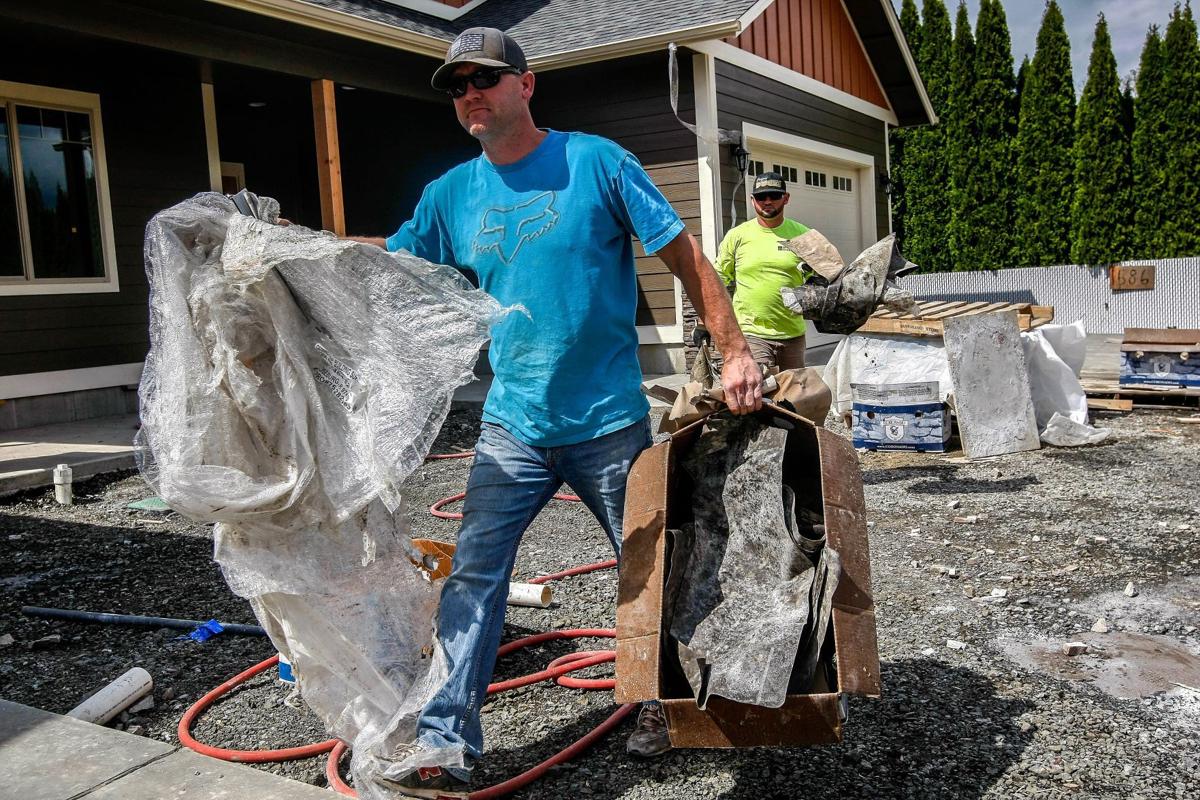 Leon Roberson of Leon Roberson Construction, left, and Cody Ferrano, haul debris from two spec homes near completion at the end of Primrose Lane in Roseburg this month.

Tony Edwards, a painter for Shelby & Miguelena Construction, carries debris from a job site in Roseburg in 2017. After the 2007 housing market crash, many skilled workers left Douglas County to find work elsewhere, placing people such as Edwards in high demand.

Leon Roberson of Leon Roberson Construction, left, and Cody Ferrano, haul debris from two spec homes near completion at the end of Primrose Lane in Roseburg this month.

After the 2007 housing market crash, many skilled workers left Douglas County to find work elsewhere, but not enough have come to replace them.

“What we have now as the market is getting going again is a whole crop of new guys coming into the market that don’t necessarily have the experience,” housing developer Tim Drechsel said. “It’s tough to even find guys now because it’s a heavy manual labor type position, so getting them trained and getting them to show up on time and clean, it’s a huge issue.”

Construction employment in the county grew with the national housing bubble between 2000 and 2006 to reach 2,060 jobs, according to Regional Economist Annette Shelton-Tiderman. After the number of permits began dropping with the market crash, construction employment slowed slightly as local contractors finished the projects they had already started.

Instead of a chosen occupation like it might have been for generations in the past, Drechsel said he thinks construction has become a job to fall back on for money, and one that doesn’t inspire much passion in young people anymore.

“Basically they’re there to collect the check, not to have pride in their work. I think that’s one of the big things we’ve been short on, the guys who are prideful in what they’re able to accomplish,” Drechsel said.

Many workers survived the recession, and some of the new young professionals are indeed passionate in the field. But finding others to work for them, Drechsel said, is challenging.

It’s refreshing to Drechsel to see an interest in the industry from the general contractors and engineers he interviews for projects.

“But listening to their concerns about being able to do some of the large-scale projects I want to be doing, we don’t have the labor force for them in Roseburg,” he said.

Though he and other developers would prefer to hire local contractors to construct large buildings in Douglas County, the labor force restricts their options to bringing workers from Eugene and Portland.

“When a project would take local groups two to three years to accomplish, and somebody in Portland can get it done in a year, obviously you’ve got to get it done quicker because the banks want their money back,” Drechsel said.

Construction is not the only trade with this issue. Forestry, mills, welding and trucking all face similar employment issues. As marijuana is legal in Oregon but not federally, potential employees with traces of it in their drug tests can’t be hired.

“When people retire, they leave the industry altogether, and we have more problems with drug use and stuff of that nature, but we just keep plugging along and try to find those good people again,” John Miguelena, co-owner of Shelby & Miguelena Construction Co. in Roseburg said of the dwindling employment rate in the field.

According to him, construction workers used to be skilled in multiple aspects of the trade, but now the applicants he sees are specialized in specific categories, like framing, concreting or finishing, but not all three.

“Even now I get applications all the time, but they’re not skilled like they used to be,” Miguelena said. “I think the generation in the construction field are not as hard workers as they used to be in the past. I think it’s just a lack of work.”

Miguelena said he does have hard-working employees, and he credited the good workers he’s employed over the last 40 years of business.

“We’ve had a lot of good people work through the years,” Miguelena said. “We’ve been here a long time, we’ve got a good reputation and people call us all the time, so we keep trying to fill the needs.” He added that business has been doing well and there are many projects going on.

The lack of new residential building permits for both single-family houses and rentals is closely tied to the decrease of construction jobs.

As part of a national trend, Shelton-Tiderman said there’s not enough inventory to meet the housing demand in Douglas County.

“In order to get the housing inventory built up, whether it’s a single-family home or apartment, you have to build. To build you have to have workers, and the workers are very hard to find,” she said. The ability to build outdoors depends on the weather, making the industry seasonal as well.

Though there is a lack of new development in the area, there are still ongoing projects from years ago that need to be completed.

“There’s still some subdivisions that were built in 2004 and 2005 that are just now being built on because we have the demand,” said Ben Tatone, project manager for Tabor Building in Roseburg. “We have 24 houses in process, and nearly all of them are pre-sold. We’re definitely at full force right now trying to keep up with how much demand there is for new homes.”

According to a 2016 Oregon Employment Department study of southwestern Oregon job vacancies, construction ranked second with 185 unfilled positions, after health care and social assistance with 193 vacancies.

The jobs are available for hard-working skilled workers who want to be there, not out of obligation but out of passion. They’re just hard to fill.

“The wages can be very good depending on the skills people have, and it’s a great industry for someone to go right out of school and get a job,” Shelton-Tiderman said. “If they can get their foot in the door, they can develop some incredible skills and make a really good living.”

From initial assistance with planning to overseeing your entire build, your project manager will work closely with you at all stages; planning, materials, commissioning glass, installing services, plasterers, painters and interior decorators. Whatever you’re building, we provide project management on all our projects, no matter how small the job. woodbridge builders

Why aren't these good paying jobs emphasized in school?