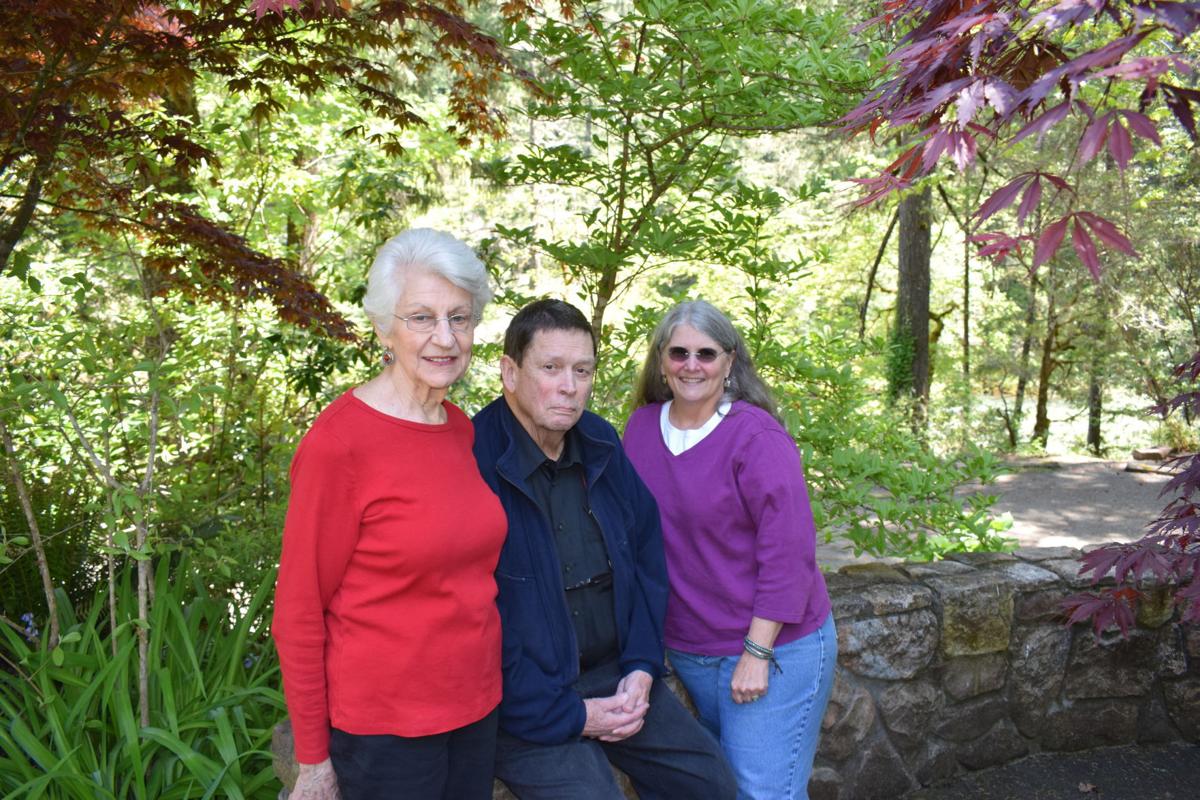 From left, Sharon and Jim Van Loan and Pat Lee pose for a photo in the garden of Steamboat Inn on Monday. 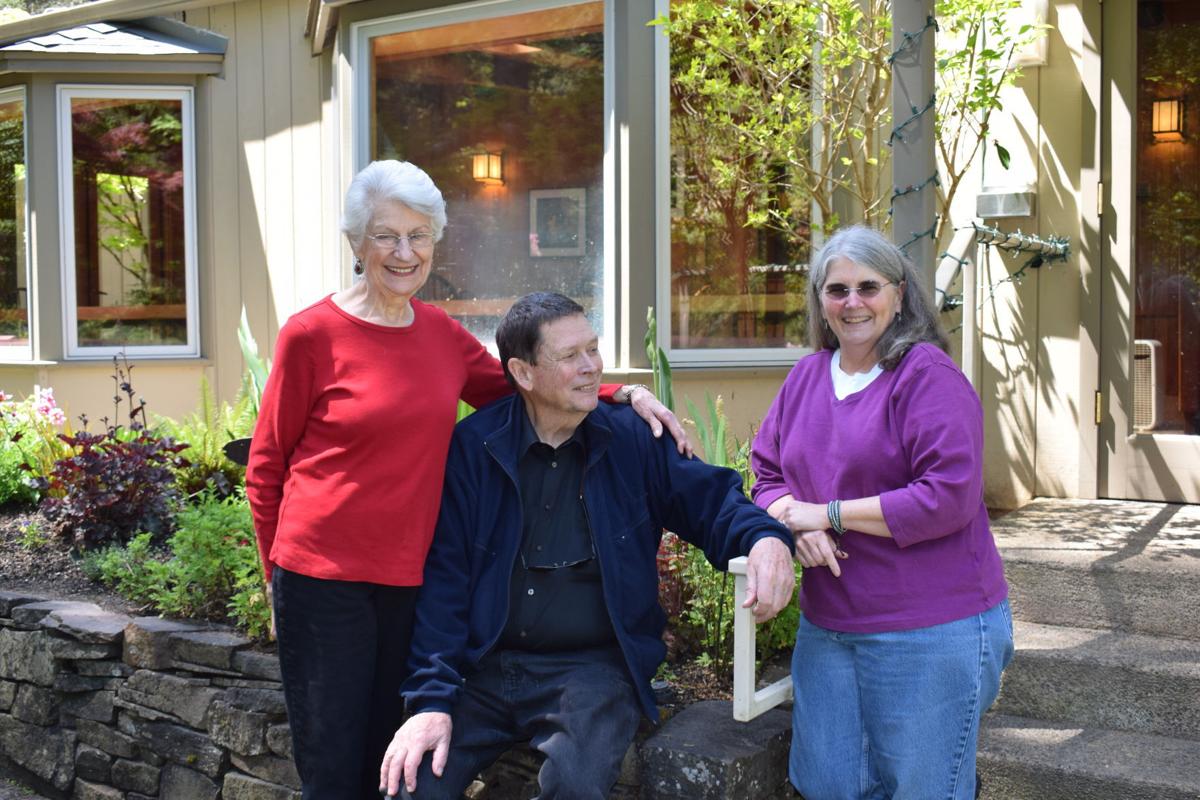 From left, Sharon and Jim Van Loan and Pat Lee pose for a photo at Steamboat Inn on Monday. The Van Loans had owned the inn since 1975. 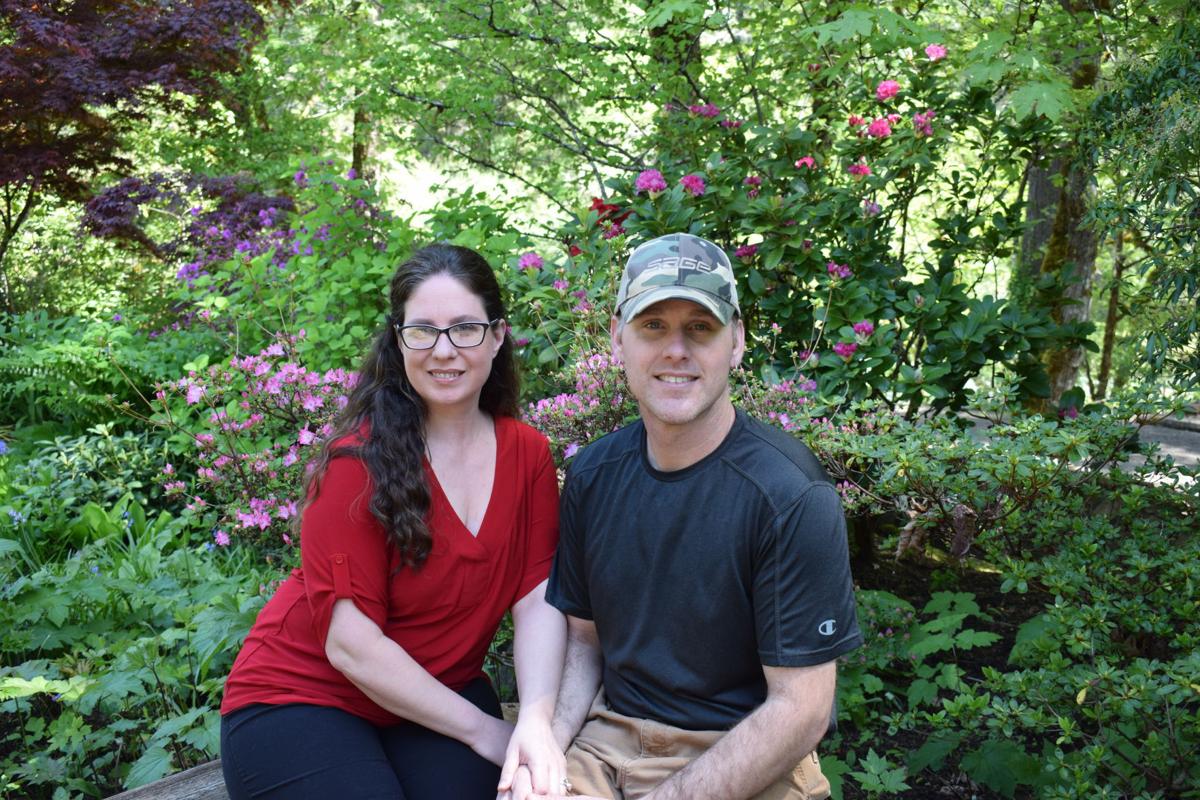 Melinda and Travis Woodward are the new owners of Steamboat Inn. 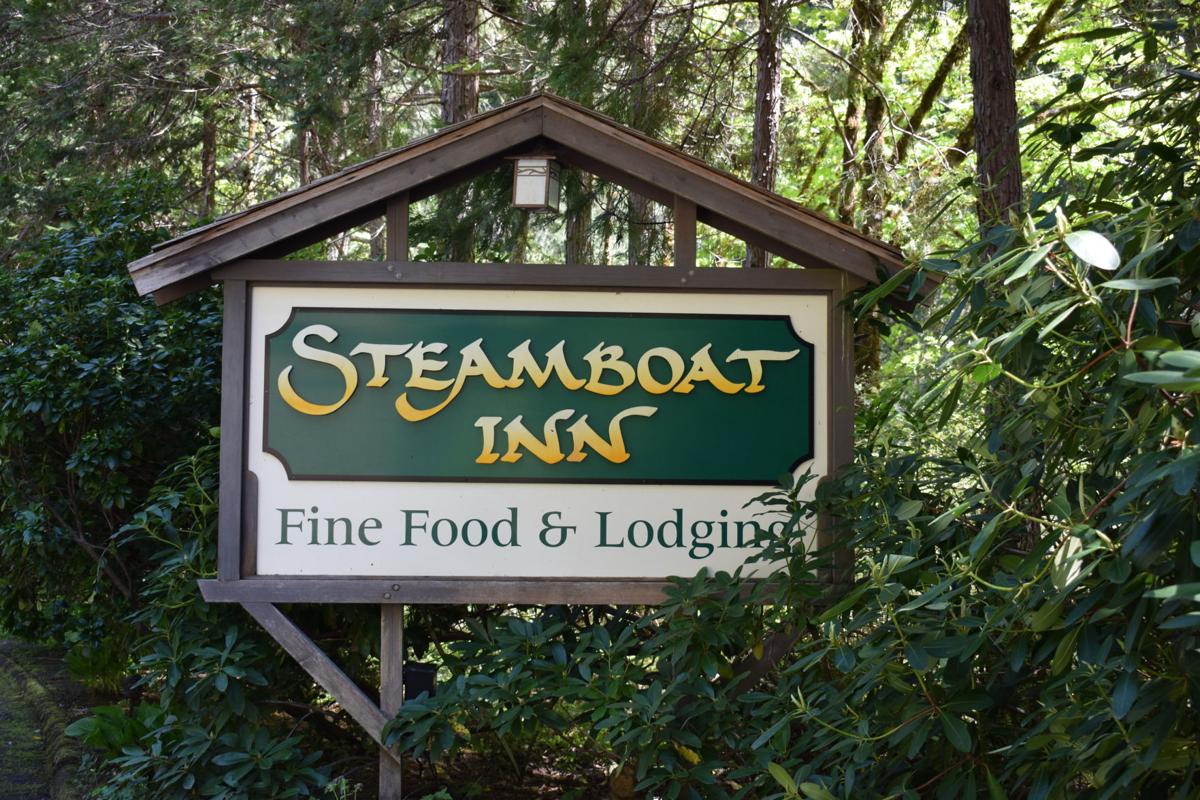 The new owners of Steamboat Inn said they plan to keep many aspects the same, but open dinners up from 5 to 10 p.m. seven days a week starting after Memorial Day weekend. 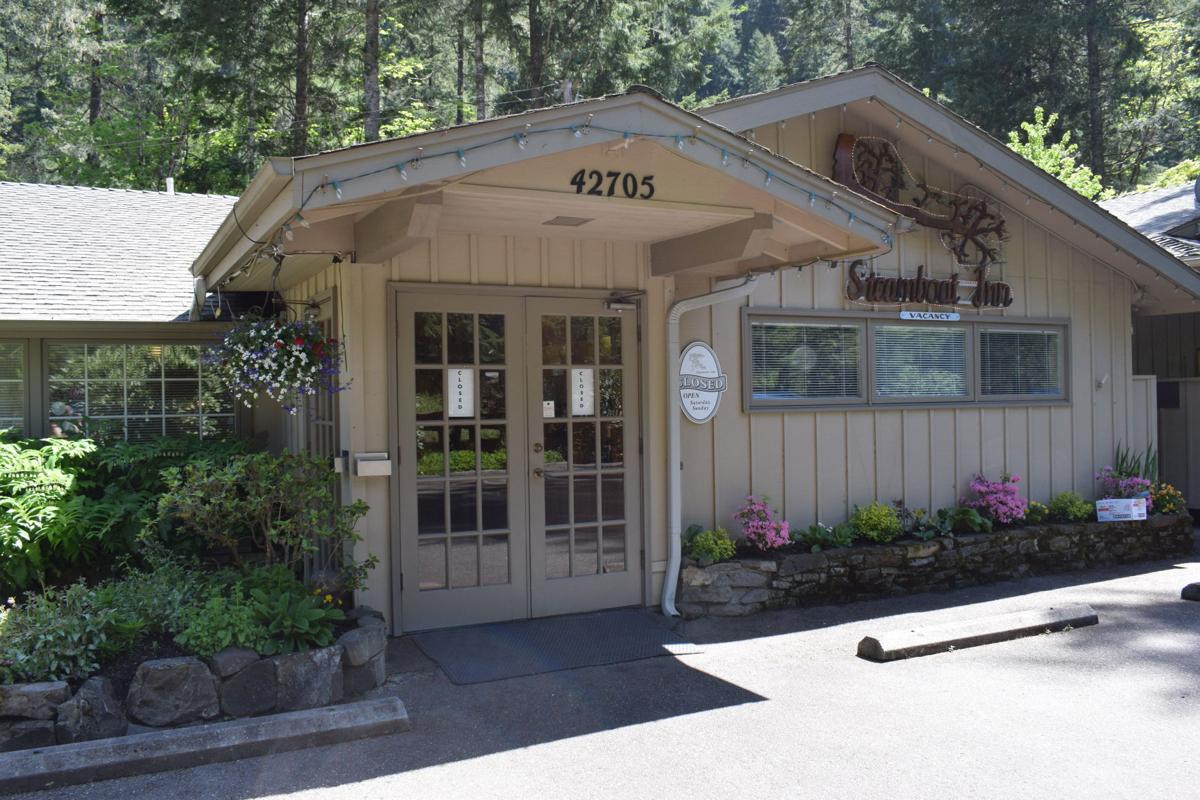 Steamboat Inn, located along the North Umpqua River east of Idleyld Park, is a popular stop for fly fishers and visitors to recreational sites such as Crater Lake National Park.

From left, Sharon and Jim Van Loan and Pat Lee pose for a photo in the garden of Steamboat Inn on Monday.

From left, Sharon and Jim Van Loan and Pat Lee pose for a photo at Steamboat Inn on Monday. The Van Loans had owned the inn since 1975.

Melinda and Travis Woodward are the new owners of Steamboat Inn.

The new owners of Steamboat Inn said they plan to keep many aspects the same, but open dinners up from 5 to 10 p.m. seven days a week starting after Memorial Day weekend.

Steamboat Inn, located along the North Umpqua River east of Idleyld Park, is a popular stop for fly fishers and visitors to recreational sites such as Crater Lake National Park.

IDLEYLD PARK — Fly fishing in the world-class North Umpqua River, walking down the flower-lined aisle in the garden or enjoying an elegant feast with local wines, visitors of Steamboat Inn make new memories at the historic site.

After more than 40 years at Steamboat Inn, Sharon and Jim Van Loan are passing ownership of the destination to Melinda and Travis Woodward.

With three properties along the North Umpqua River and Steamboat Creek, Steamboat Inn has been a popular place to eat and stay for fly fishers, hikers and visitors of nearby attractions like the numerous waterfall trails and Crater Lake National Park.

“This river has an international reputation,” Sharon Van Loan said, adding that a fisherman from France loved the river so much he named his son Umpqua.

“Our longtime guests know their river is still here and things may change, but I think the spirit will go on,” manager Pat Lee added. “We’re proud of what has been built here.”

After working at the inn for a couple of years, Sharon and Jim Van Loan took it over from Frank and Jeanne Moore in 1975. Lee joined them two years later as manager. As chefs who use local and seasonal ingredients, Lee and Sharon Van Loan cooked together in the kitchen, creating two cookbooks, “Thyme on the River” and “Thyme on the River Too,” while Jim Van Loan maintained the grounds and building.

Jim Van Loan and Lee had also become skilled fly fishing guides for guests, carrying on the tradition of their predecessors.

Now, the compound features a duplex and houses for nightly rent.

Some of the furnishings from the original lodge are still used today at Steamboat Inn, including the long sugar pine dining table and benches.

As the inn gained popularity, the Van Loans added more riverside cabins, a library and more at the Steamboat Inn and built cottages near Steamboat Creek.

A spring runs from a nearby hillside to provide the inn with fresh water, which Sharon Van Loan calls fabulous.

The inn has also become a destination for weddings and family celebrations. Each year, it hosts the Steamboat Pinot Noir Conference for winemakers from across Oregon. Most weekends in the spring, the Van Loans and Lee invited chefs from around the state to come and interact with the guests.

As Jim Van Loan turned 80 in November and Sharon Van Loan will turn 80 in August, they decided to retire, though they’ll keep their house by the river.

“It’s been a great adventure,” Sharon Van Loan said. “We just have great guests and I think they’re going to connect well with the new owners.”

The Van Loans and Lee are planning to stay until mid-June to help the Woodwards transition into their new role.

Melinda and Travis Woodward moved from outside Eugene to Steamboat and began their first day at the inn May 1.

The couple had both worked at a country club where Melinda Woodward, 42, was the head of the catering department and Travis Woodward, 39, was head of maintenance. They decided to branch out and do something for themselves, like run a fishing lodge. When they found the Steamboat Inn, they knew it was the right place for them.

“The business is the perfect fit with our skills. I understand the food and beverage side and he can fix anything and keep up with the grounds,” Melinda Woodward said. “We love the history of Steamboat, and we love that it already has a huge following and has many loyal guests.”

“We both love fishing, so the fishing lodge just fit perfectly, and the venue itself is perfect for weddings, which is what my wife was doing at the country club,” Travis Woodward added.

Travis Woodward is an avid fly fisherman while Melinda has fished all over the northwest. She plans to learn how to fly fish now that she lives at the lodge.

Travis Woodward said fly fishing was one of the major draws for him to purchase the Steamboat Inn.

“It’s one of my favorite places in Oregon, and it was my first choice for a lodge to own in Oregon,” he said. He had visited the inn a few times to fish and explore in the area, so when he saw it listed as up for sale last September, he jumped at the opportunity.

Travis Woodward said he appreciates the heart and soul of the place.

“It’s the heart of all fly fishing for steelhead in Oregon,” he said. Along with providing people a place to stay with good food, he added, the area offers beautiful scenery, challenging fly fishing waters and lots of opportunities for outdoor recreation.

The Woodwards said they plan to keep many aspects the same, but open dinners up to the public from 5 to 10 p.m. seven days a week starting after Memorial Day weekend.

The menu will change as well, as Chef John Biles joined the team.

Biles said his menu is very ingredient-driven with as much local and organic food as possible. He added that he’d like to get in touch with local farmers and ranchers.

A former cultural anthropology student in college, Biles enjoys blending concepts of different cultures into the food he creates.

He’s originally from the Bay Area and moved around to several towns in the Northwest over the years. He owned his own restaurant in Talent that featured an open kitchen.

“The traditions that have been established here and the attention to customer satisfaction is something I’d like to embrace and continue,” Biles said of the Steamboat Inn.

Want to start a new business? This free money could help

Smart Energy: ‘Tis the season – for higher energy use