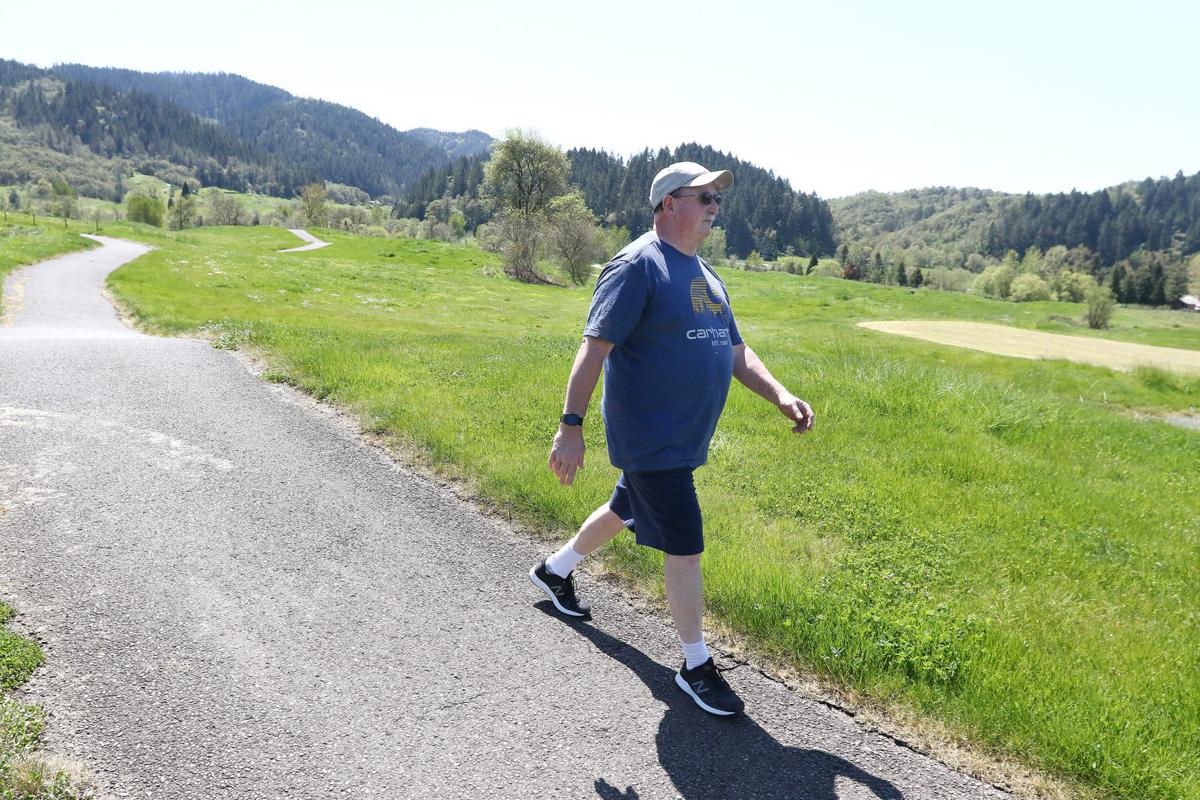 Cliff Church walks a path at a park that was previously Cougar Canyon Golf Course in Myrtle Creek on Friday. 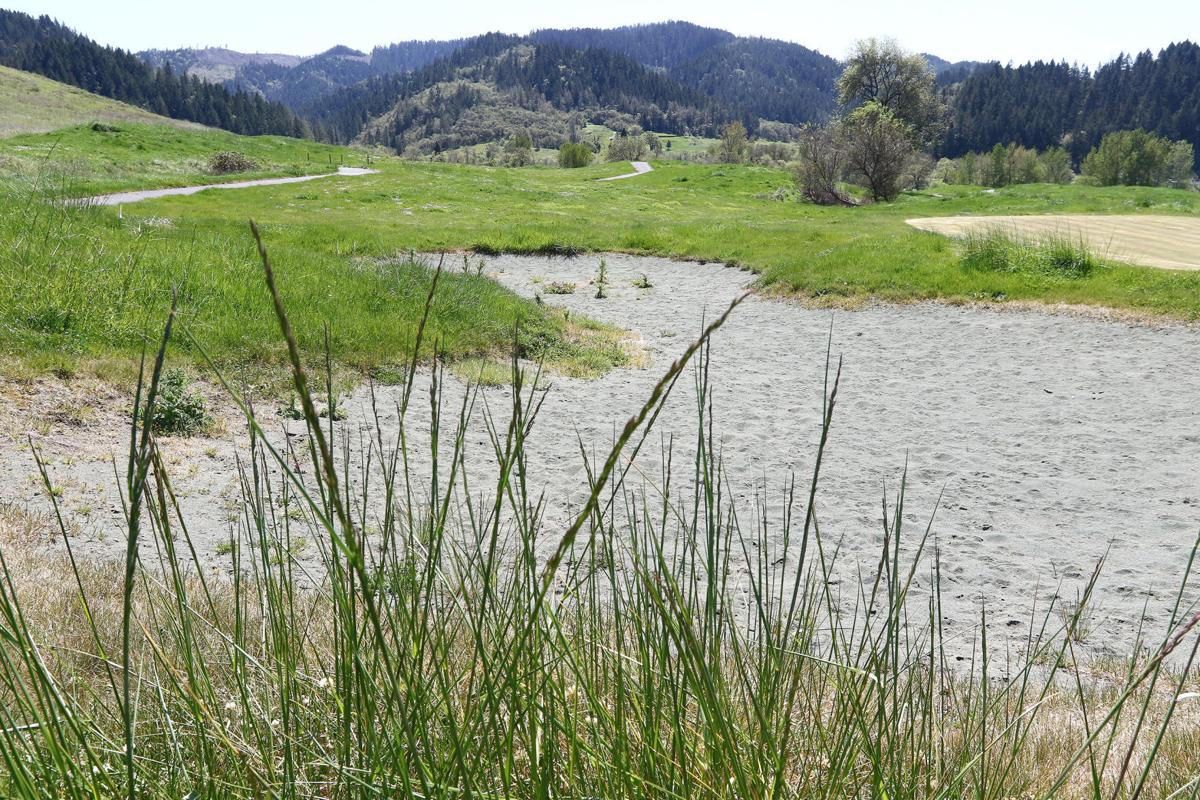 Weeds grow in and around a sand trap at Cougar Canyon Golf Course in Myrtle Creek on Friday. The golf course has been closed for several months and recently re-opened as a recreational park.

Cliff Church walks a path at a park that was previously Cougar Canyon Golf Course in Myrtle Creek on Friday.

Weeds grow in and around a sand trap at Cougar Canyon Golf Course in Myrtle Creek on Friday. The golf course has been closed for several months and recently re-opened as a recreational park.

The newest park in Myrtle Creek has miles of hiking, biking and horseback riding trails set amid a beautiful backdrop of rolling hills. It also has putting greens, fairways and a driving range.

The Cougar Canyon Golf Course is open again after being shuttered for six months. The city paid $142,000 to Myrtle Creek Links to take back stewardship of the property on April 11, Myrtle Creek City Administrator Sean Negherbon said.

“A lot of you have been using the golf course for walking and other recreational activities and that is fine, we encourage that,” Negherbon said in a YouTube video. “We officially took possession of the golf course and it’s going to be treated as another one of Myrtle Creek’s parks.”

The city got all the golf carts and equipment at the course, plus the clubhouse, cart shed and the maintenance shop in the deal, he said. However, the course is not in playing condition and Negherbon stressed that golf is not allowed to be played.

“I hate to break the news to the golfers but that’s a big no-no on our liability and could get us in some trouble,” he said.

The park is open from dawn to dusk. Horseback riding is allowed as long as the horses stay on the pathways. Dogs are also allowed, but dog owners are asked to keep their dogs on a leash and pick up after them.

There are no restrooms; those had been rented by Myrtle Creek Links, Negherbon said. He asked bicyclists to stay on the paths, and while wheelchairs and scooters for the disabled are fine, motorized vehicles are not allowed.

“Don’t be bringing your golf cart or your 4-wheeler out here, you will get a ticket,” Negherbon said. “And stay off the greens, please. We do hope that this could be a golf course at some point. Again just like our parks, no fires, no camping, no alcohol.”

Cougar Canyon was designed by renowned golf course architect Graham Cooke and opened in the mid-1990s. In addition to the 18-hole, par 72 course, Cougar Canyon offered a driving range, practice putting and chipping greens, a pro shop and a clubhouse.

The city owns Cougar Canyon but it had been managed by Myrtle Creek Links, LLC, whose registered agent is Karl Hallstrom. Hallstrom also owns Zip-O-Log Mills, Inc., in Eugene.

In need of TLCWhen it was operating, Cougar Canyon actually served dual purposes — it offered recreation for golfers and provided plenty of land for Myrtle Creek’s treated wastewater, known as effluent.

Last August Myrtle Creek Links appeared before the city council asking for about $30,000 for improvements to the irrigation system. The council declined.

Mayor Matthew Hald said previously that the city didn’t have money budgeted for that kind of expense, and that approving such an expenditure would put it over budget.

Myrtle Creek Links closed the course down on Oct. 11. Negherbon said the city is looking at various options for the property, but in the meantime it’s open for use as a park.

On Thursday afternoon there were three vehicles in the parking lot, and one of them belonged to a city employee who was cleaning out the pro shop section of the clubhouse. The course was empty — a stark contrast to when it was open for golf, when a beautiful spring day would find it packed with eager golfers.

The fairways had been recently mowed but the rough had grown out. The old course was clearly in need of some TLC.

“It’s a new chapter for this property out here,” Negherbon said. “We are looking for proposals to operate the property. Ideally it would be a golf course, that’s what it’s built for. It’s almost ready to go.”

The city is looking for volunteers to help try and maintain the old golf course, he said.

“As you can see, things are pretty rough looking,” he said on the video, which was filmed at the golf course. “We’re going to try and start mowing it as we can.

“All those activities that haven’t been done for a while need to be caught up if we’re going to try to save this as a golf course.”

For the time being the picturesque course makes an ideal park, Negherbon said.

“It’s a great place to get some exercise. It’s certainly some beautiful country,” he said. “You’re going to see some deer, turkeys. I’m not sure what else is out here, but it’s a beautiful place to get out and recreate.”

McDonald's openings a few weeks off