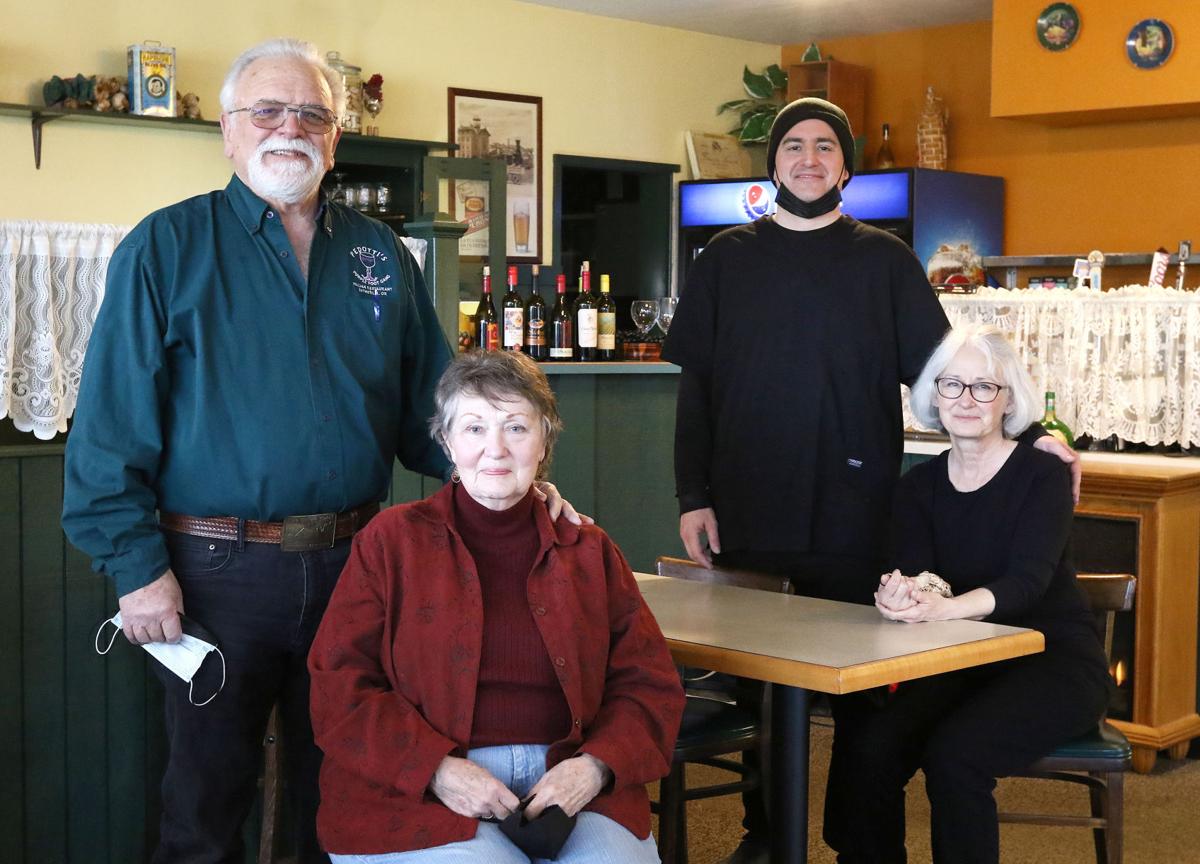 From left, Dave Pedotti and his wife Renie Pedotti, the former owners of Pedotti’s Italian Restaurant in Sutherlin, pose for a photograph with the new owners of the restaurant, Russell Swanson and Kathy Ferguson on Friday. Swanson and Ferguson opened for business in early January and will rename the eatery, Cignos Italian Restaurant. The Pedotti’s owned the restaurant for more than 23 years. 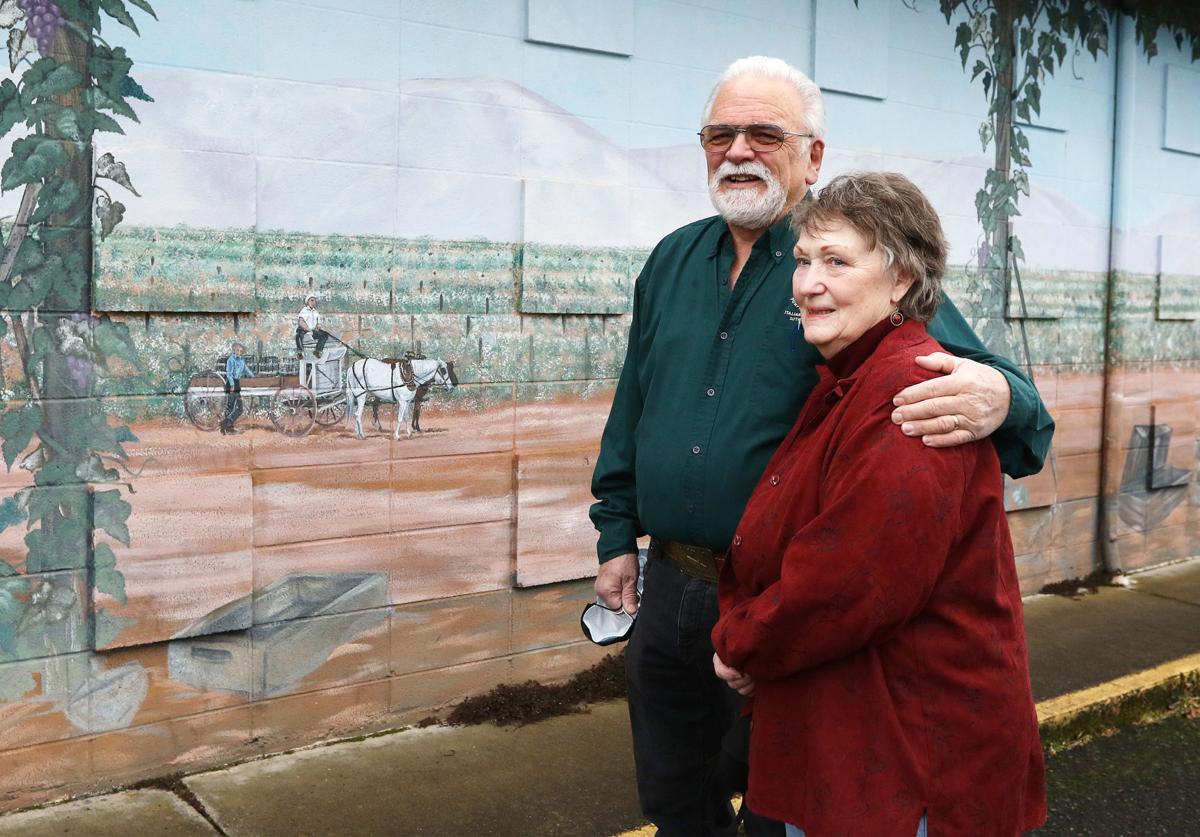 Dave Pedotti and his wife Renie Pedotti stand in front of a mural on the front facade of Pedotti’s Italian Restaurant in Sutherlin on Friday. The mural is based on a photograph taken in Napa Valley and is a depiction of the couples’ fathers, Alex Pedotti and Ed Gleason. The Pedottis sold the restaurant to Russell Swanson and Kathy Ferguson.

, who plan on renaming the eatery Cignos Italian Restaurant.

From left, Dave Pedotti and his wife Renie Pedotti, the former owners of Pedotti’s Italian Restaurant in Sutherlin, pose for a photograph with the new owners of the restaurant, Russell Swanson and Kathy Ferguson on Friday. Swanson and Ferguson opened for business in early January and will rename the eatery, Cignos Italian Restaurant. The Pedotti’s owned the restaurant for more than 23 years.

Dave Pedotti and his wife Renie Pedotti stand in front of a mural on the front facade of Pedotti’s Italian Restaurant in Sutherlin on Friday. The mural is based on a photograph taken in Napa Valley and is a depiction of the couples’ fathers, Alex Pedotti and Ed Gleason. The Pedottis sold the restaurant to Russell Swanson and Kathy Ferguson.

, who plan on renaming the eatery Cignos Italian Restaurant.

Those were among the first words Dave Pedotti said when asked about the sale of his Pedotti’s Italian Restaurant in Sutherlin.

It’s true. After more than 23 years of serving up pizza, pasta and a family-friendly atmosphere, Dave and his wife Renie have sold their Central Avenue restaurant and plan to take a well-deserved rest.

Dave Pedotti said he and Renie want to deliver the following message to the community: Thank You.

“After 23 years there’s just so many folks that we want to thank, people that supported us over the years,” Dave Pedotti said. “We started off with not knowing anything about the business and stayed in it for 23 years.”

The Pedottis were sheep and cattle ranchers in Northern California for years before deciding to seek a change of scenery. They liked the looks of Oregon and re-settled up here. They also liked a place in town that was located in a converted Dairy Queen. It was named Dory’s Italian Restaurant after its owner, Dory Schirmer.

As Pedotti tells it, he stopped in one day to ask Dory for a donation for his local car club. The conversation turned to the restaurant and Pedotti asked her if she’d consider selling it to him.

“She said yes, and six months later we were in the business,” he said. “I liked the atmosphere and thought it was a cute little place.”

Pedotti’s Italian Restaurant opened on July 7, 1997. From Day 1 it was trial by fire for the couple. Dave ran the place and Renie, who was working weekdays in a doctor’s office, kept the books and would help out in the restaurant on weekends.

“The first year I lost 20 pounds,” Dave Pedotti said. “We knew how to run a business, but not a restaurant.”

Over the years things smoothed out and the restaurant grew in just about every way — its clientele, local support and even the menu.

“We went from a single page menu to a six-page menu by the time we were done,” Pedotti said.

The restaurant developed a reputation for providing a warm environment with good food, and customers responded, Pedotti said. Over time Pedotti’s had a large group of regular customers, he said.

“My hat’s off to them, I really mean it. We built up a customer base over the years and it was grand,” Dave Pedotti said. “You got to know these folks. It was great.”

John Campbell is one of those regulars. Campbell has been going to Pedotti’s for about 15 years now. He used to go with his wife until she passed away 10 years ago. Now he goes about once a week with a friend, or by himself.

“It’s my favorite restaurant,” he said. “I like the atmosphere there, it has a family type feeling to it.”

Campbell said he has too many favorite dishes to list, but if prodded he mentions the sausage calzone, Dave’s special pizza and the spumoni ice cream. Campbell said he grew up in the Boston area, which has a lot of great Italian family restaurants.

“This restaurant has that same family feel that I enjoyed back there,” he said. “It must be my Italian blood even though my name is Campbell.”

MANY MEMORIESPedotti’s also built up a steady clientele of customers who traveled the Interstate 5 corridor, from Southern California to Canada.

“We built that up all through word-of-mouth,” Pedotti said. “It was like, ‘Hey, if you go thru I-5, make sure you stop at Pedotti’s.’ And they did. We had customers that traveled through and they only stopped in a couple times a year, but they became regulars.”

The couple also remembers all the great employees they had over the years. Pedotti rattles off their names and recalls one server who started when she was 15, and now has a 15-year-old son of her own.

“That’s how long we’ve known these people. They become family after a while,” he said. “They are there in good times and bad. We enjoyed our people. Every one of them brought something special. That’s what made Pedotti’s special.”

Between all the great friends they made, the great meals they served, the ups and downs, Pedotti said he has enough memories to write a book. What would the title be?

“Don’t Buy a Restaurant,” he said with a chuckle.

The couple started thinking about retirement a while back and put the restaurant up for sale about seven years ago. They got a couple of nibbles but nothing concrete until Russ Swanson approached them about buying it.

The two sides ironed out an agreement and Swanson took over ownership a few weeks ago. In a note to readers posted on Facebook, the Pedottis said Swanson and co-owner Kathy Ferguson will largely keep the same staff and recipes, but will also add their own touch to things.

“Russ is really committed,” Pedotti said. “He’s going to make some changes, which is fine. That’s one of the things the restaurant needed, was new ideas and energy.”

One change on the way: Swanson and Ferguson will rename the eatery Cignos Italian Restaurant.

As for the Pedottis, they plan to hit the pause button for a minute and just enjoy the little things. They have a small ranch on Metz Hill and plan on spending time there, and with family.

“Once the restaurant happened there was no time for anything but work. We were there six days a week, then seven days,” Pedotti said. “We didn’t even go see our grandkids. I miss my son, miss my grandkids, miss them all.”

“We thank the community so much for supporting us. And we’re thankful for all the great people we met over the years,” Dave Pedotti said. “We couldn’t have settled in a better community. This is an area we love.”