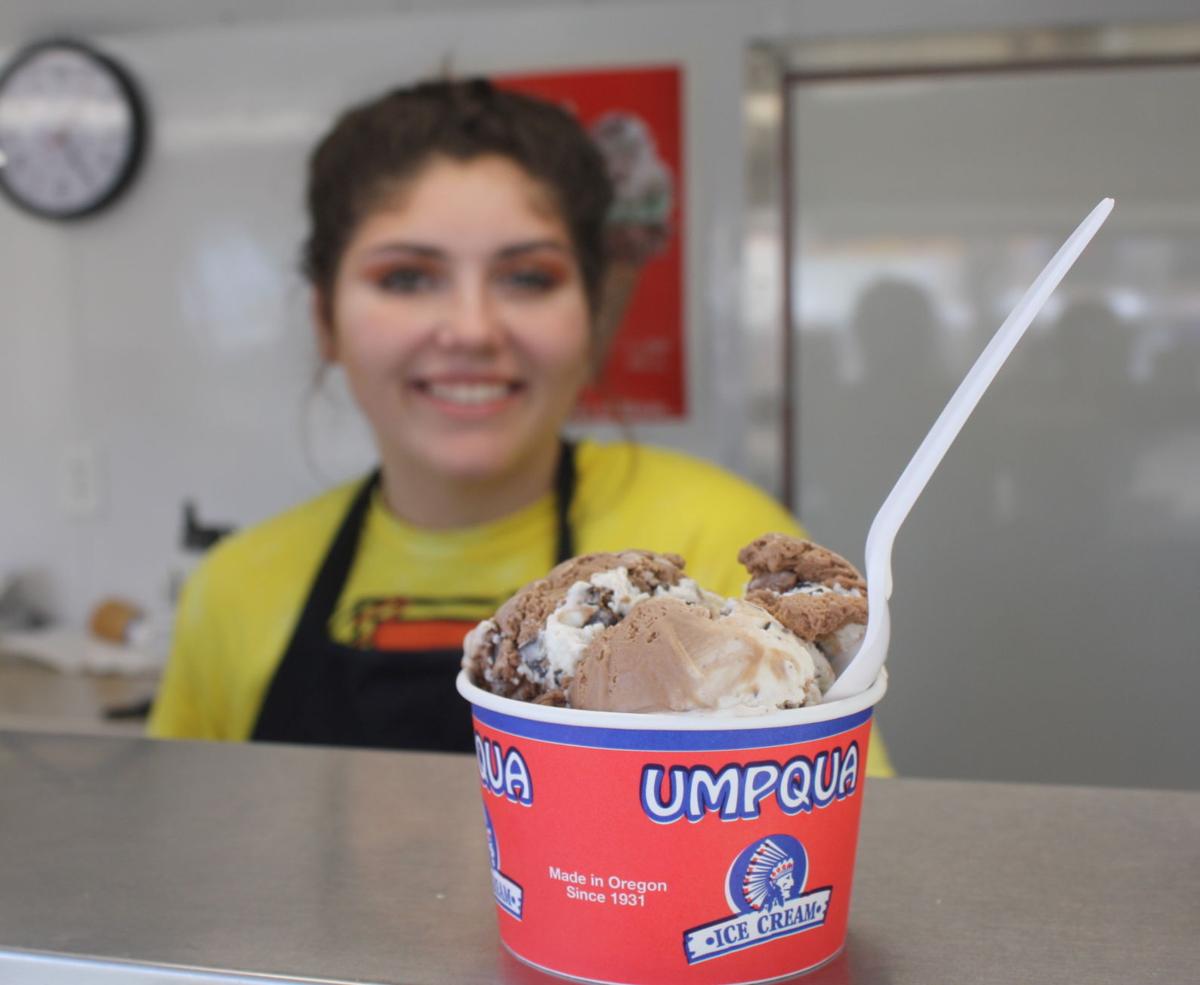 Serenity Thompson, a sophomore cheerleader at Roseburg High, serves up some triple chocolate ice cream to a customer at the Umpqua Dairy trailer at the Douglas County Fair in 2017. 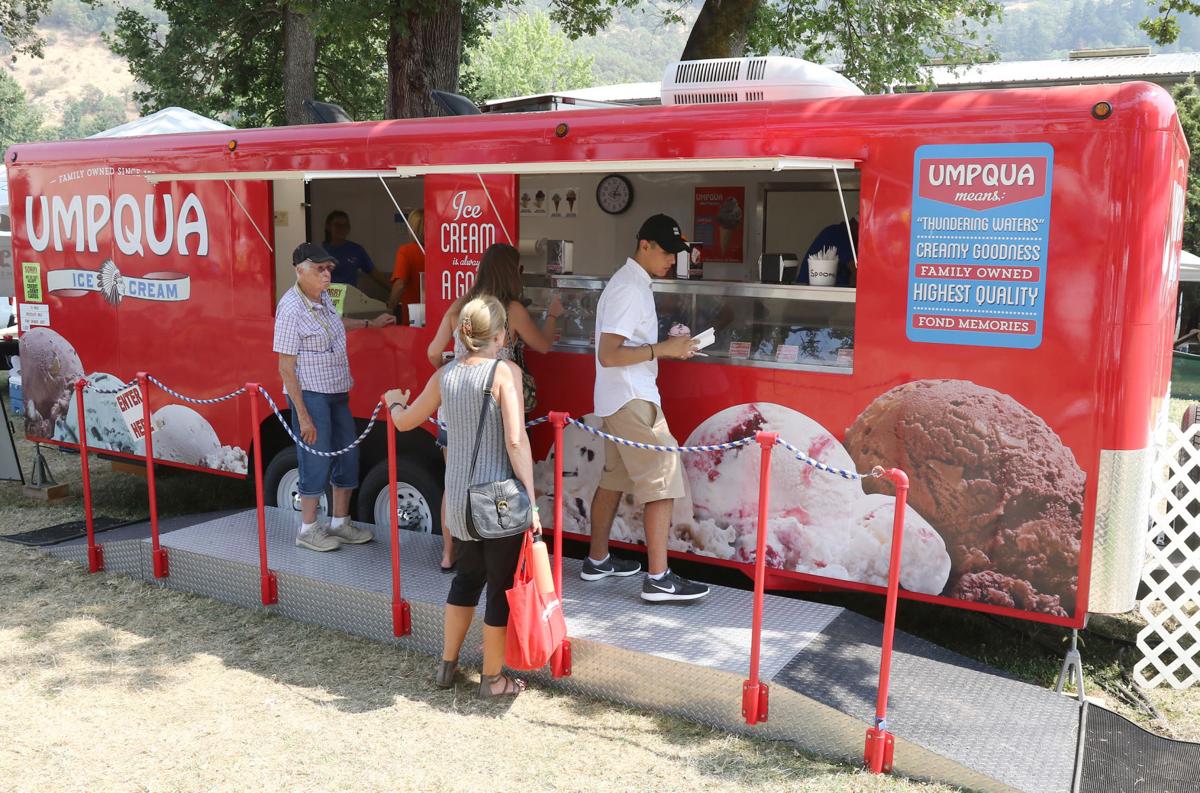 Fair visitors line up for ice cream at the Umpqua Dairy ice cream trailer at the Douglas County Fair in 2017. Umpqua Dairy announced Friday it is being sold to a family based ice cream company in Fresno, California.

Serenity Thompson, a sophomore cheerleader at Roseburg High, serves up some triple chocolate ice cream to a customer at the Umpqua Dairy trailer at the Douglas County Fair in 2017.

Fair visitors line up for ice cream at the Umpqua Dairy ice cream trailer at the Douglas County Fair in 2017. Umpqua Dairy announced Friday it is being sold to a family based ice cream company in Fresno, California.

Umpqua Dairy, a Roseburg mainstay that was been owned by the Feldkamp family since it was founded 89 years ago, is being sold to another family-owned dairy company.

Umpqua Dairy officials said they are working with Producers Dairy to transition ownership of the company while maintaining its family-owned status. Producers Dairy is owned by the Shehadey family and is headquartered in Fresno, California.

“Producers Dairy is another third-generation family-owned business who values Umpqua Dairy, our employees, our Roseburg manufacturing facility, and our distribution facilities throughout the state of Oregon,” Umpqua Dairy CEO Doug Feldkamp said in a news release. “We do not have a fourth generation currently involved in our company and it was very important to our family to find a company with similar values, culture, and a focus on supporting our communities. We believe that we’ve found that company in Producers Dairy.”

The companies plan to continue Umpqua Dairy’s brand, staffing and locations. Additionally, there is an opportunity for Umpqua Dairy’s award-winning products to be distributed throughout a much larger geographical area, Feldkamp said.

The two companies have signed a memorandum of understanding and are currently undergoing discussions about Producers Dairy acquiring Umpqua Dairy, with an anticipated completion date of Dec. 31. Umpqua Dairy Chief Operating Officer Steve Feldkamp plans to continue with the company for at least one additional year and Doug Feldkamp plans to continue in his current role for the next three years.

Producers Dairy was founded in Fresno in 1932. By the mid-1950s, Larry Shehadey had purchased the company and began to transform it, using Hoppalong Cassidy as its spokesperson and establishing the company’s first dairy farm. Today, the third-generation company continues to be led by members of the Shehadey family and is uses the phrase “Nourish Lives one at a Time.” The company produces and distributes a variety of dairy products from its three manufacturing facilities and 13 distribution centers throughout California and Nevada.

“We are very excited about this opportunity,” Scott Shehadey, president of Producers Dairy and a third-generation owner, said in the release. “Umpqua Dairy’s values are well aligned with our values and our desire to nourish people’s lives. They have a great team of people and have continuously demonstrated their commitment to excellence with a rich history of award-winning products. As another third-generation family-owned company, we understand the importance of carrying on Umpqua Dairy’s legacy and we are committed to stewarding their heritage well.”

Umpqua Dairy Products Co. was founded in Roseburg in 1931 by Ormond Feldkamp and Herb Sullivan. The two men started the venture with $500 between them, a 1929 Hudson delivery truck and a little wooden ice house next to the railroad tracks on Sykes Street in Roseburg. Feldkamp and Sullivan began bottling milk, churning butter and making ice cream to sell to railroad passengers as they stopped at the train station in Roseburg.

Soon they began delivery routes throughout Douglas County. In 1936, the wooden building that housed the original Umpqua Dairy was torn down and a new brick building was built in its place. A portion of this building still exists at that spot today, incorporated into the newer facility.

Umpqua Dairy continued to grow through the years. It was the first dairy in the Northwest to introduce the half-gallon round ice cream container in the late 1940s, commonly referred to as the company’s “red round,” according to its web site. The original logo design, created in the early 1930s, was inspired by the Native American culture in the area. The current Indian head logo design is still carried on all of the Umpqua Dairy product line.

In 1946, Umpqua Dairy became the first dairy in Oregon to put milk in paper quarts, pints and half pints, the company said.

In 1953, Herb Sullivan suffered a stroke, retired and sold his portion of the business to Ormond Feldkamp. Ormond was succeeded by his son Barton D. (Bob) Feldkamp in 1962. Under Bob’s leadership, Umpqua Dairy grew 10-fold, expanding distribution to Josephine, Jackson and Coos Counties and in 1974 became an official member of the national Quality Chekd organization, according to the company website.

Distribution centers were opened in Coos Bay in 1977, and Grants Pass a year later.

The dairy manufactures and packages a variety of products, from ice creams to soft-serve mix to fresh dairy products like milk, sour cream and whipping cream, to orange juice and fruit drinks. The company is the largest independent dairy in Southern Oregon, according to its website.

“This is the beginning of the next chapter of Umpqua Dairy,” Doug Feldkamp said. “I have no doubt Umpqua Dairy will continue to thrive and grow in Roseburg and across the region over the next 89 years, just as we have since our grandfather founded this company in 1931. That’s why I’ll continue working here for at least three more years to assure that Umpqua Dairy’s future is as bright as our past.”

If the grandparents and parents are deceased, and the business passed on to the children then it's the children's business now. The brothers are adult men who have made Umpqua Dairy even more successful than what they inherited. Sure they didn't start from scratch, but they also didn't "sell off" before making huge improvements to operations and the financial bottom line. I'm thinking grandparents and parents don't have much use for money if they aren't on Earth now...

It figures. The grandkids take grandpa and father's hard earned money and go party. And they are doing it in style by selling out to a Californicated company.