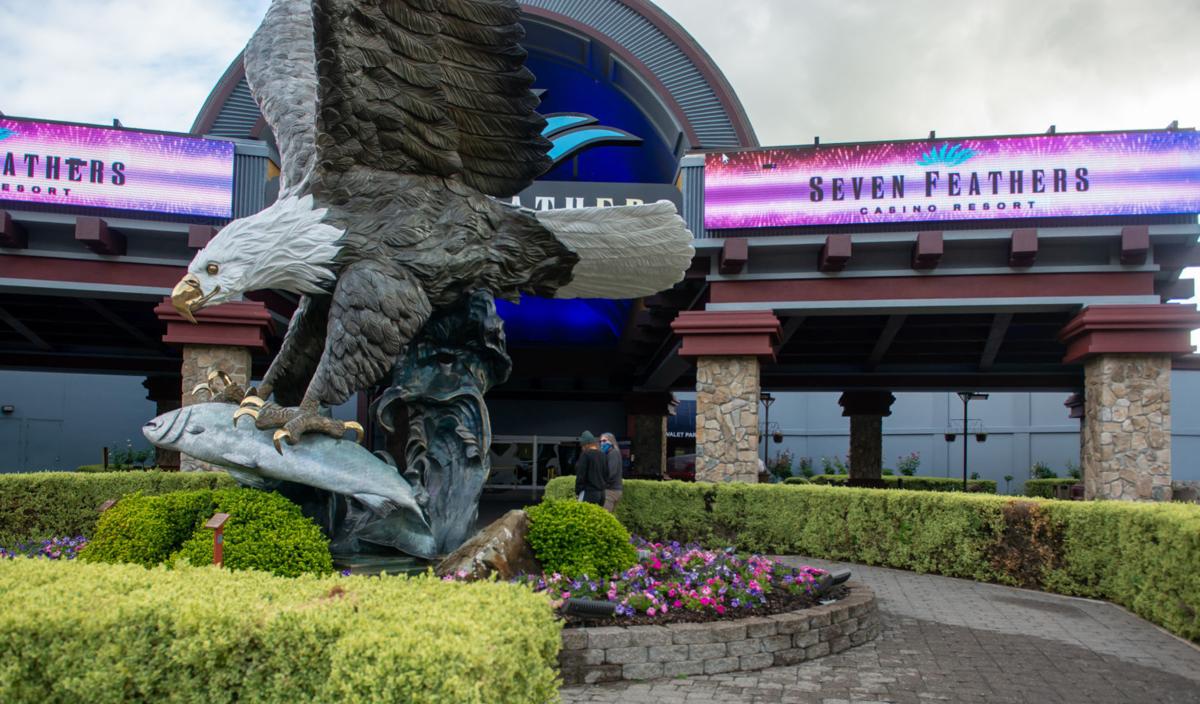 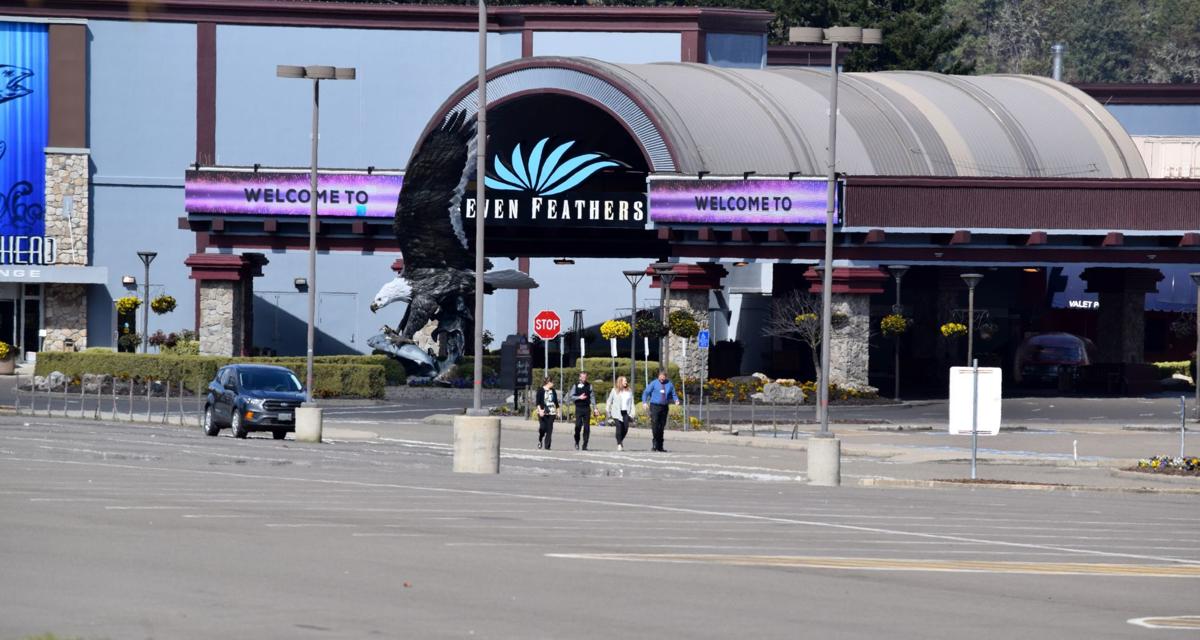 Staff of Seven Feathers Casino Resort walk around an empty parking lot Tuesday after Cow Creek officials closed the Canyonville venue early in the afternoon. The closure came due to the spread of coronavirus. 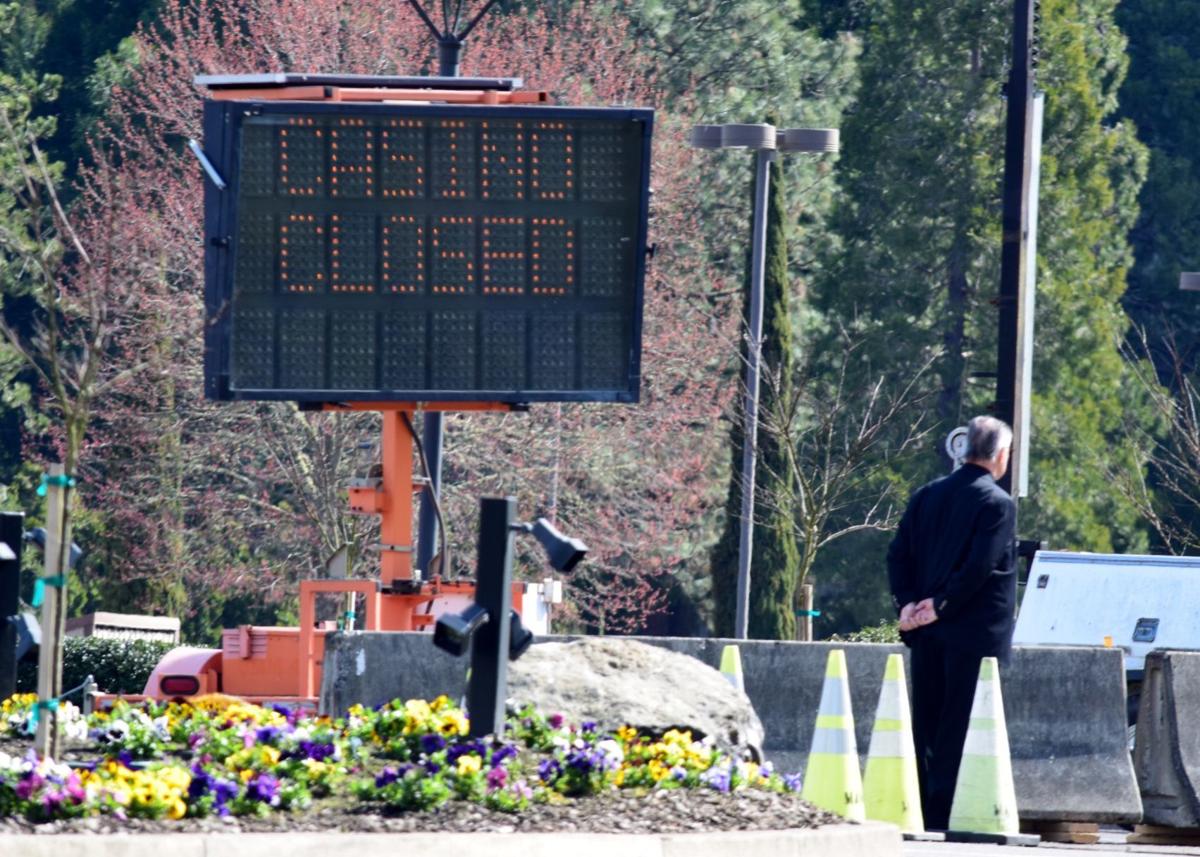 Richard Singer, a member of the Seven Feathers Casino Resort security team, watches the entrance of the Canyonville venue after it was shut down earlier this month. The Cow Creek Band of Umpqua Tribe of Indians announced Monday it will furlough more than 500 workers. 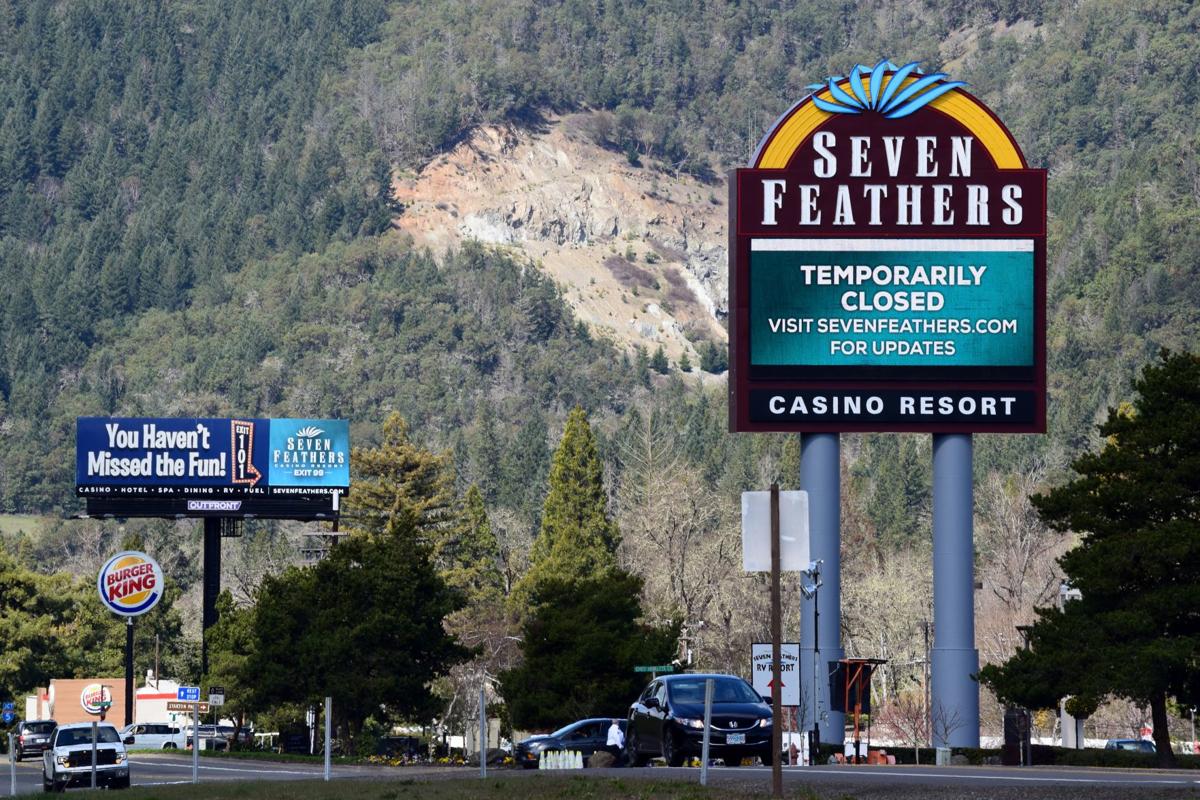 A sign tells potential visitors of Seven Feathers Casino Resort that the venue is closed early Tuesday afternoon. The venue was closed due to the spread of COVID-19, which prompted an order from Oregon Gov. Kate Brown to limit social-gathering sizes.

Staff of Seven Feathers Casino Resort walk around an empty parking lot Tuesday after Cow Creek officials closed the Canyonville venue early in the afternoon. The closure came due to the spread of coronavirus.

Richard Singer, a member of the Seven Feathers Casino Resort security team, watches the entrance of the Canyonville venue after it was shut down earlier this month. The Cow Creek Band of Umpqua Tribe of Indians announced Monday it will furlough more than 500 workers.

A sign tells potential visitors of Seven Feathers Casino Resort that the venue is closed early Tuesday afternoon. The venue was closed due to the spread of COVID-19, which prompted an order from Oregon Gov. Kate Brown to limit social-gathering sizes.

CANYONVILLE — Seven Feathers Casino Resort reopened Friday after being closed for more than two months, an event that was met with enthusiasm by customers and workers alike, all eager to regain some sense of normalcy.

The Canyonville casino opened its doors at 7 a.m. and there was already a line of some 100 customers waiting to get in. Spokesperson Susan Ferris said those who entered had their temperatures taken and had to wear masks, as did the staff — all measures that will be kept in place for the foreseeable future. Other changes included reconfigured gaming areas, limited venues and shortened operating hours to give workers time to disinfect and clean.

Seven Feathers, which is owned by the Cow Creek Band of Umpqua Tribe of Indians, is one of Douglas County’s largest employers and most well-attended attractions. Before shutting down on March 17 due to COVID-19, Seven Feathers had about 650 employees and averaged about 1,300 customers a day.

The sudden closure led to more than 500 of those employees to be furloughed and denied those customers a place to play electronic slot machines and enjoy food and drinks.

Since the closure, the Cow Creek tribe had been quiet about its plans to reopen the casino resort.

Wednesday night, Seven Feathers brought in about 300 frequent customers and around 100 employees for a test run of the newly configured casino and hotel. When that soft opening went well, the tribal council took a vote in a Zoom teleconference meeting Thursday and decided to reopen.

The casino posted a lengthy note on its web site Friday announcing the opening and describing in detail the numerous changes that were implemented to ensure the safety of customers and staff.

“Since we closed our doors on March 17, we have been hard at work making upgrades to the property to ensure the health and safety of everyone who enters our doors,” the casino said on its website. “You may have seen many of the safety measures we are implementing already in place in businesses across our communities. These practices follow best outlines for sterilization, sanitization and social distancing that have been outlined by health industry experts.”

Additionally, the restaurants will be open for limited hours, with limited menus and grab-and-go selections.

Seven Feathers is among four casinos in Oregon that reopened this week.

All four had been closed since March, costing each of them significant dollars in lost revenue.

Like Seven Feathers, the other casinos are reopening in phases and making changes to the way they operate, including smaller gaming areas, and shortened operating hours.

“Many things were taken into account as we developed our plan to reopen the casino,” the web site said. “First and foremost, the health and safety of our team members and guests. We also needed to take into account that we are one of the largest employers in Southwest Oregon, and many of our team members being eager to return to work so they can provide for themselves and their families.”

Oregon Gov. Kate Brown said in March that she had no authority to decide whether tribal facilities closed or took other steps during the coronavirus crisis. Despite that, all nine tribal casinos in the state decided to close temporarily due to the outbreak.

Nationally, more than 500 tribal casinos were shuttered in response to the COVID-19 pandemic, according to media reports. Like Seven Feathers, revenue from the tribal casinos funded a bevy of programs, including social services and health care initiatives, that were strained during the closures.

Seven Feathers started as a bingo hall in 1992 and gradually grew over the decades.

Before the March closure the lavish casino featured about 900 gaming machines, two dozen gaming tables, a bingo hall and more in a nearly 70,000 square-foot gaming area. The resort also includes a 25,000 square-foot convention center, several restaurant/lounges and a 300-room hotel.

Last summer, Seven Feathers was named one of the Top 10 casinos in the country, according to a survey of TripAdvisor reviews.

Seven Feathers ranked 10th in the survey. The rankings were based on data from more than 360,000 TripAdvisor reviews.

The casino has also been home to many events, including conferences, concerts and shows. Shows scheduled for this fall include Rick Springfield, Larry the Cable Guy and Dwight Yoakam.

Brace yourselves . . . it is about to get very real, very fast in Douglas County.

I received the below email today from the county commissioners regarding a public meeting to be held on Tuesday. You must hurry if you want to gain access to the meeting as a member of the public because county offices are closed on Monday. I'm curious why the NRToday did not publish anything about this meeting. Apparently Douglas County no longer publishes public meeting notices in NRToday. Also, contrary to what the email says, the agenda was not attached. Nor was the agenda located at the link provided in the email. I've attached a link to the agenda at the bottom.

(Roseburg, OR) A special meeting of the Douglas County Local Public Safety Coordinating Council (LPSCC) will take place on Tuesday, May 26, 2020 at 12:00 pm via a virtual conference format.

Due to COVID-19, we are taking extra precautions, therefor the meeting will be conducted virtually. We will accommodate any member of the public who wishes to join the meeting via video or by phone. For information on how you can listen in on this meeting, please email the LPSCC Coordinator, Melissa McRobbie-Toll at melissa@co.douglas.or.us or call (541) 450-9768.

The meeting agenda is attached and can also be found at www.co.douglas.or.us.

Douglas County is struggling to meet all public health benchmarks meant to protect residents from the coronavirus amid reopening efforts according to the Oregon Health Authority. Specifically, Douglas County is NOT meeting the tracing requirements for the one new coronavirus case it had since reopening began.