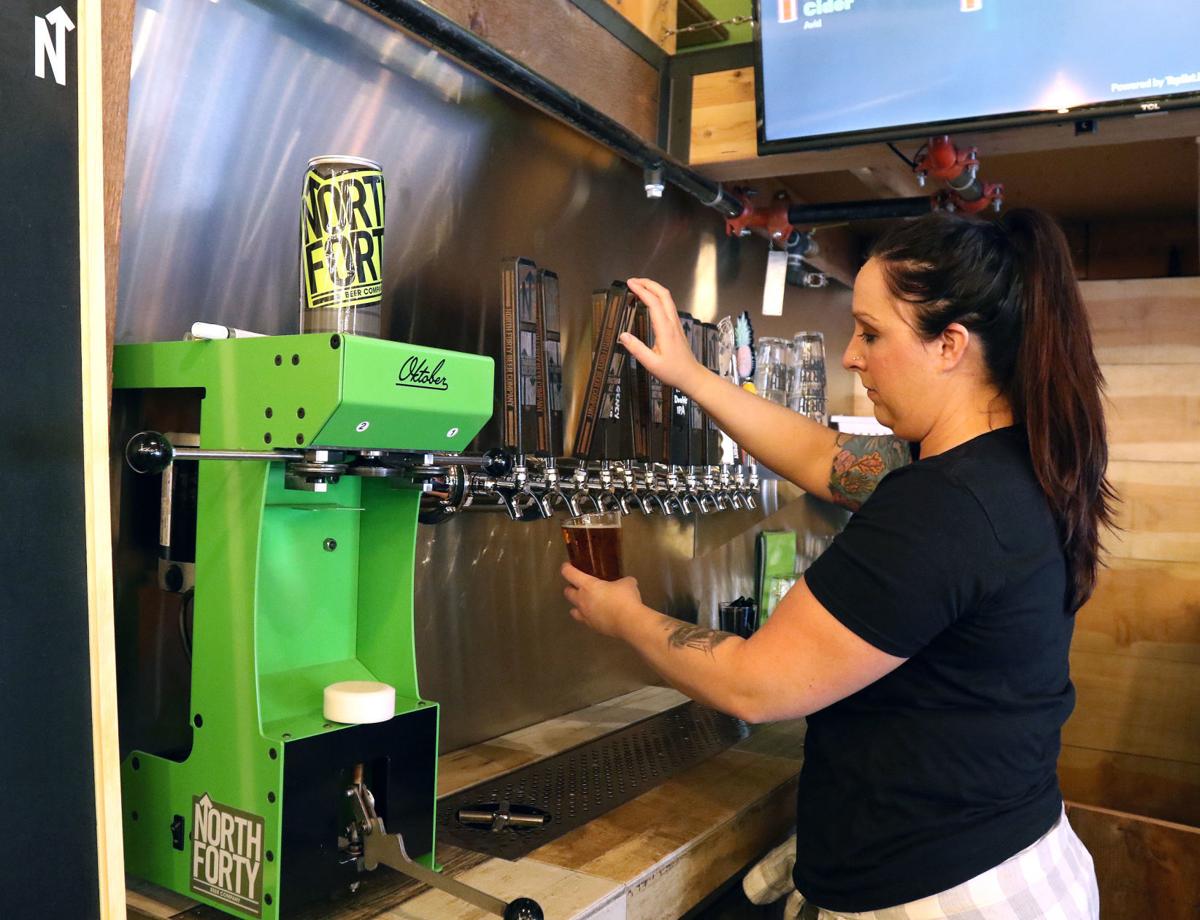 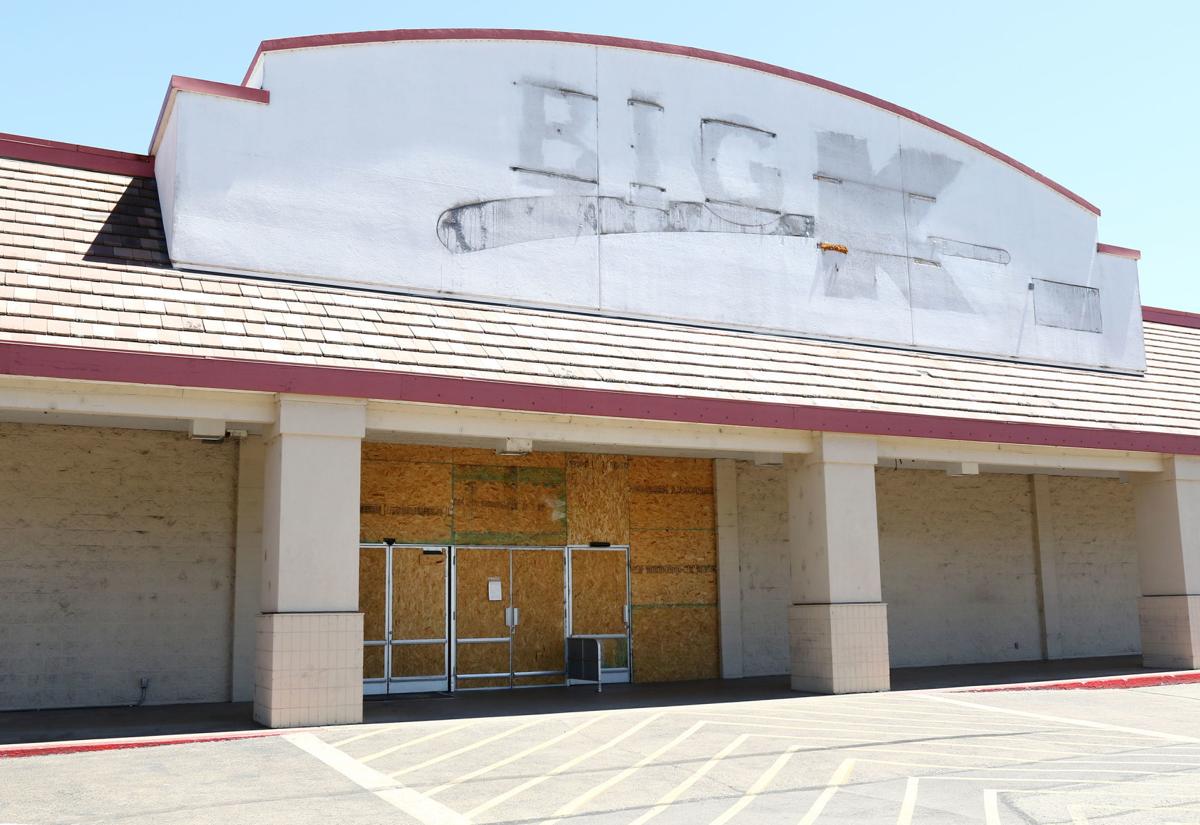 Boards cover the entrance to the former K-Mart department store in Roseburg recently. Signs of economic decay, such as the K-Mart building and the abandoned Rite Aid building in downtown Roseburg, are an eyesore for the community. 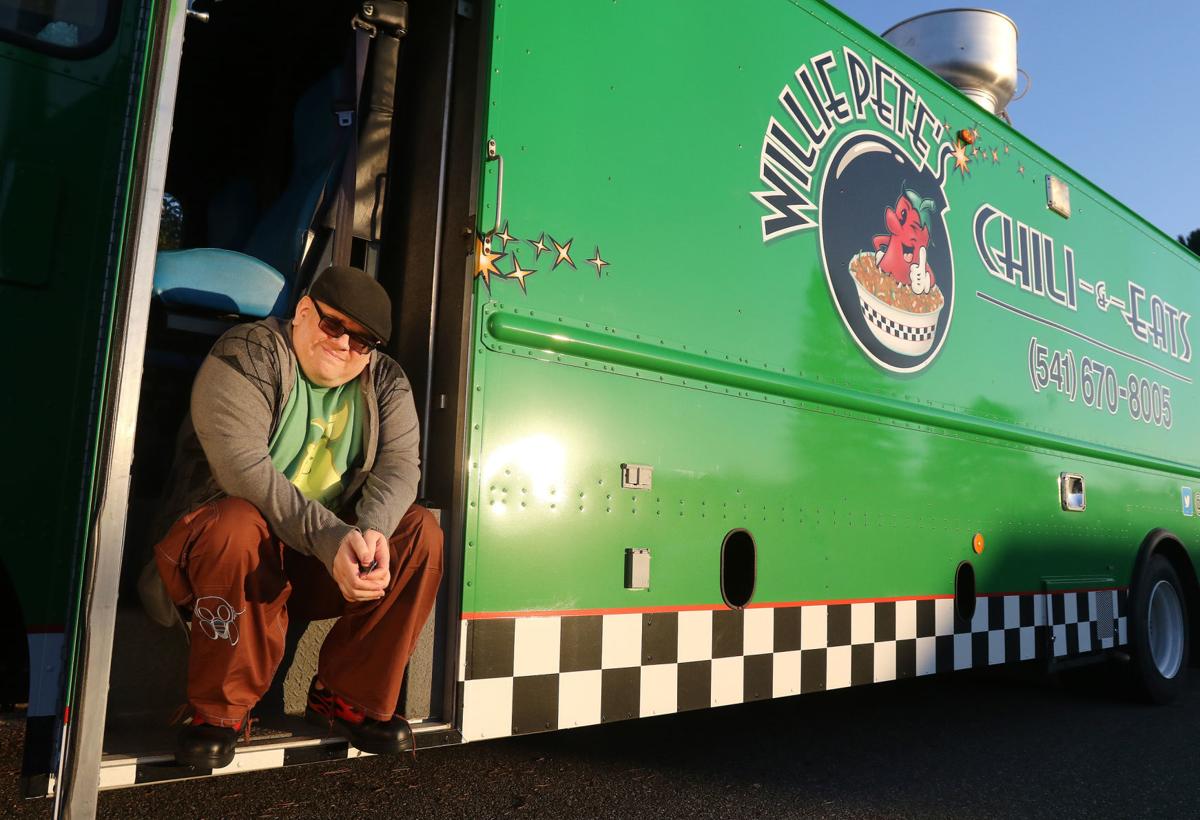 Willie Pete’s Chili and Eats food truck owner Paul Bjelland is preparing to start operation at The Lot in Roseburg on Dec. 11. 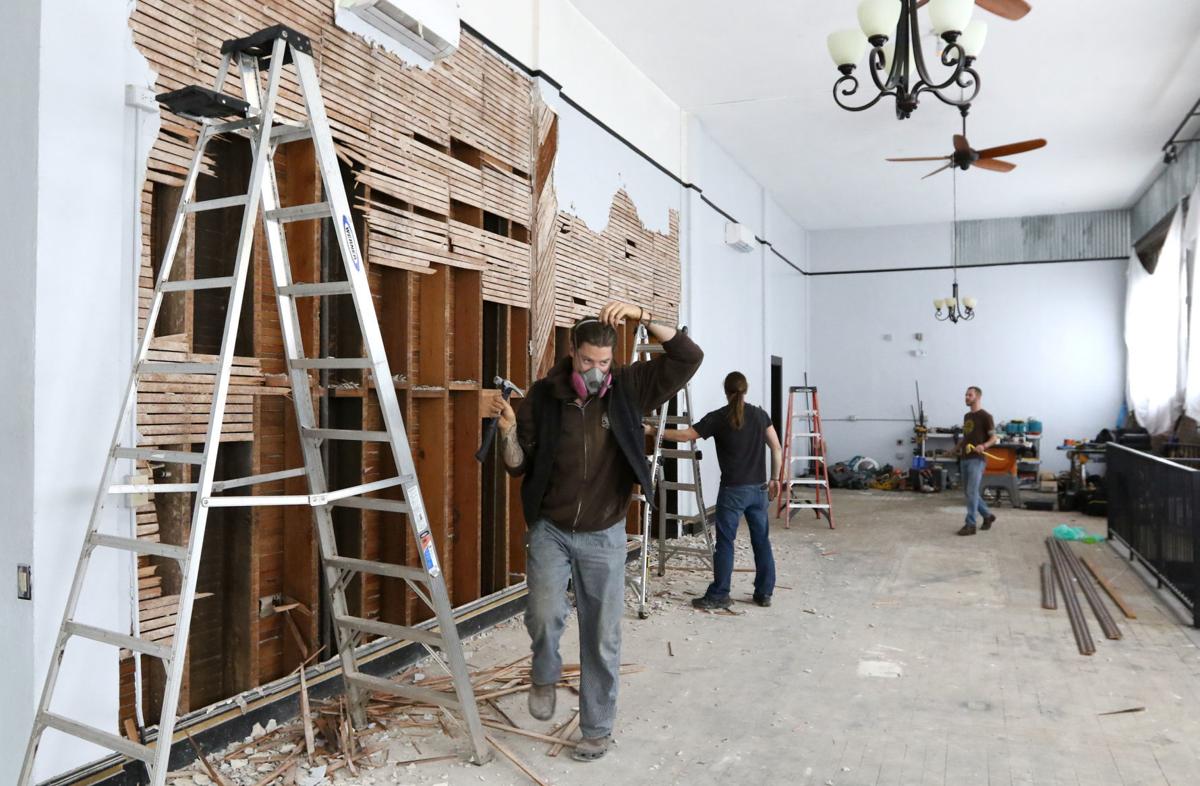 From left, The SunnySide co-owners Daniel Thomas and Judd Louis work with Kevin Upright to renovate the interior of their music venue in downtown Roseburg. Brewpubs, restaurants and wine tastings should be part of what locals hope will be a continued rebirth of downtown Roseburg. 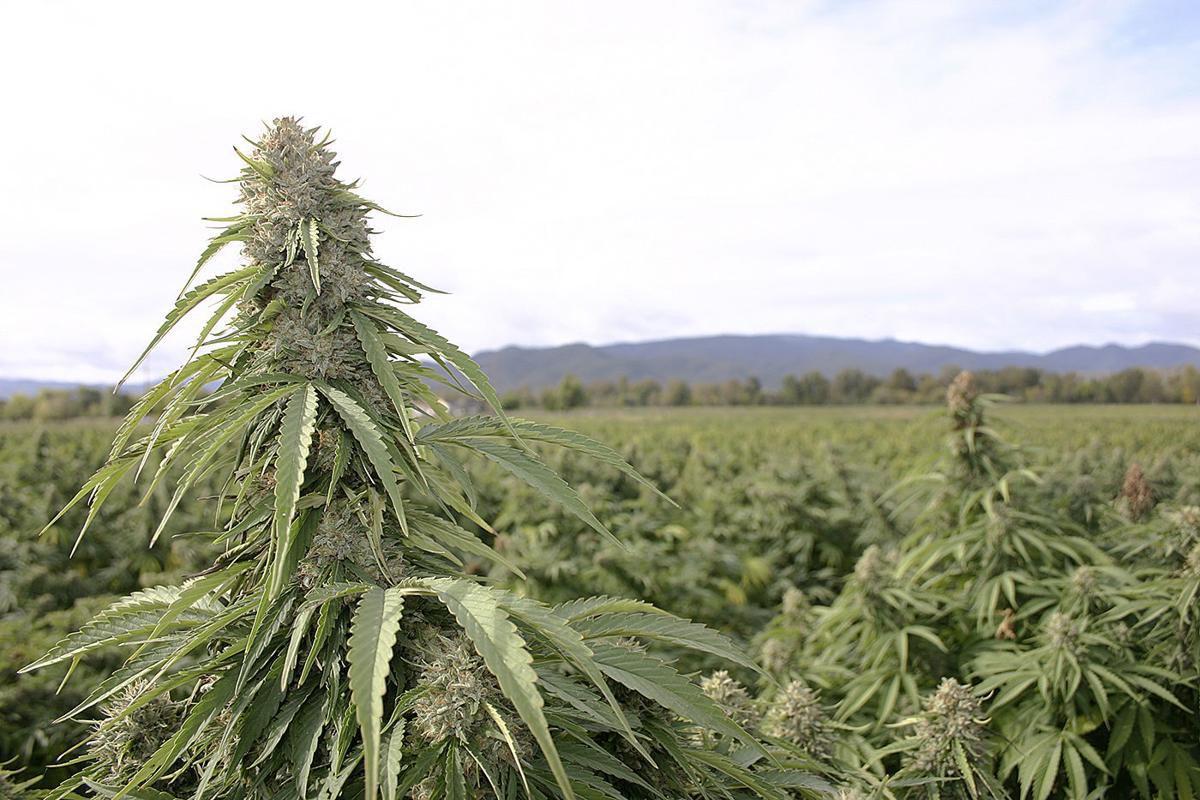 Hemp plants grow in abundance at Hemptown USA near Central Point. Oregon’s hemp acerage has grown enough in recent years that only Colorado surpasses it. 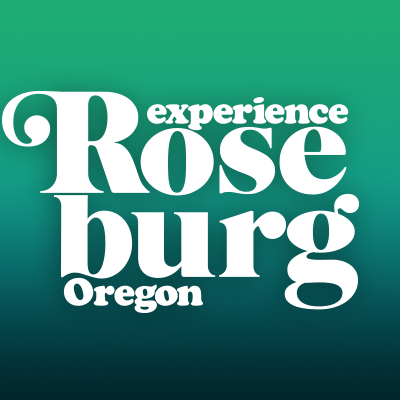 Anvil Northwest rolled out a new logo to promote the City of Roseburg on social media.

Boards cover the entrance to the former K-Mart department store in Roseburg recently. Signs of economic decay, such as the K-Mart building and the abandoned Rite Aid building in downtown Roseburg, are an eyesore for the community.

Willie Pete’s Chili and Eats food truck owner Paul Bjelland is preparing to start operation at The Lot in Roseburg on Dec. 11.

From left, The SunnySide co-owners Daniel Thomas and Judd Louis work with Kevin Upright to renovate the interior of their music venue in downtown Roseburg. Brewpubs, restaurants and wine tastings should be part of what locals hope will be a continued rebirth of downtown Roseburg.

Hemp plants grow in abundance at Hemptown USA near Central Point. Oregon’s hemp acerage has grown enough in recent years that only Colorado surpasses it.

Anvil Northwest rolled out a new logo to promote the City of Roseburg on social media.

With the decade about to end and 2020 on the horizon, this is a good time to dust off the crystal ball and make some predictions for what I expect the economic landscape to look like next year. Here are what I believe will be the top business/economic stories for Douglas County in 2020. Numbers 11-20 appear below; 1-10 were in last Sunday’s newspaper.

11. Cannibis: One of the biggest differences in the region over the last 20 years has been the growth of the cannabis industry. The most visible and obvious example of this are the 13 licensed marijuana dispensaries in Douglas County, according to the Oregon Liquor Control Commission. By comparison, there are 150 dispensaries in Portland alone and more than 550 statewide. Of course supplying those dispensaries is also big industry in Oregon — the OLLC issued more than 1,100 active producer licenses in the last three years alone. Then there is the booming hemp industry. Just drive around Douglas County and you’ll see acres of hemp growing where there used to be corn, hay and other crops.

12. New Apartments: A recent study confirmed it but anyone who has tried to find a decent apartment in the area already knew that there is an acute shortage of affordable housing in the county. That shortage exacerbates the growing number of homeless here and also makes it difficult for middle-class professionals like nurses, teachers and police officers to live and work here. Good news is on the way, in the form of three new apartment complexes totaling, nearly 300 units, all slated for the Diamond Lake Boulevard corridor east of downtown. That won’t put an end to the housing shortage here — one study found that an additional 2,700 units will be needed to house the more than 5,500 people expected to move here in the next 20 years — but it’s a start.

13. Downtown Roseburg: I’ve written about it a lot in my short time here, but here it goes again: good things are happening downtown. People are going there to sample the restaurants, brewpubs and wine tastings. A new high-end food catering business, Craft 22, just opened and a live music venue, The SunnySide, is scheduled to open early next year. Business-wise, the “business incubator” spot The Loft is humming, and its owner, entrepreneur Trevor Mauch, bought the old Roseburg Book and Stationery building and plans to renovate it and put retail businesses in. Good things are about to happen.

14. Tourism Promotion: Tourism in Douglas County is big business and efforts to bring tourists here are critical to the local economy. That task will now belong to the Roseburg marketing firm Anvil Northwest. The handoff to Anvil was a bit awkward — the local tourism promotion contract had been held for 20 years by the Roseburg Area Chamber of Commerce. But the city canceled the contract this year, amid sniping between city officials and the chamber, and awarded a $450,000 annual contract to Anvil. Anvil then wowed city officials at a power point presentation. Look for good things from the forward-looking marketing firm. Also look for so-called “sports tourism” — mountain biking, rock climbing, kayaking, even large bowling tournaments — to continue to grow as a segment of the local tourism industry.

15. Brewpubs: North Forty brewpub, which opened in the summer of 2018, is just one example of the growing brewpub scene here. And it’s not just the quantity of brewpubs in the county but the quality of the product they produce. I work near downtown Roseburg and there are a half-dozen terrific brewpubs within a five minute drive and at least a couple I can walk to. All of these brewpubs now bottle and can beers — some even can it on the spot — bringing exposure and revenue to them and the region.

16. New Businesses: Getting in shape one of your New Year’s resolutions? You’re in luck, thanks to the recent opening of the 20,000 square-foot Planet Fitness gym in the Roseburg Marketplace. Next to Planet Fitness is the newly-opened Shoe Dept. Encore, and Ulta Beauty next to that is set to open shortly. Fairfield Inn, Mountain Mike’s Pizza, The SunnySide live music venue, Craft 22 Catering, Tractor Supply Co., Douglas County Co-op and several other new businesses have also just opened or are slated to open in 2020. Those new businesses mean jobs for people and more choices for consumers. It’s still more of a dribble than a waterfall, but these businesses should provide a boost to the local economy.

17. Millenials: Arin Forrest, co-owner of the popular North Forty brewpub, is under 40 years old yet one of the oldest members of the board of the Downtown Roseburg Association. Trevor Mauch, new owner of the former Roseburg Book and Stationery is about the same age. Mauch started the Young Entrepreneurship Society, a club for aspiring business owners, and established the Loft, a downtown Roseburg entrepreneurial workspace. In 2017 Mauch was named one of the top CEOs in Oregon under 40. Get the drift? It might have been inevitable, but there is a large and growing core of business owners under 40 that are driving the economy. Look for that encouraging trend to continue.

18. Vacant Buildings: This is a pet peeve of mine. The sign of a healthy, growing economy are bulldozers, cranes and work crews building new homes, apartments and office buildings. The sign of the opposite — economic decay — are vacant buildings like the old K-Mart on Stewart Parkway and the Rite Aide in downtown Roseburg. This region will never be truly economically vibrant with those eyesores cluttering up the landscape. Moreover, they are a sign of a lack of vision among developers and city planners.

19. Cougar Canyon: Cougar Canyon Golf Course outside of Myrtle Creek closed in early October following a lengthy squabble between the city of Myrtle Creek and the company that has the rights to manage the course. The closure of the course, which is a hidden gem as anyone who has ever been there can attest, is good news to absolutely no one. I don’t expect it to stay closed for long, and when it does reopen look for it to be better than ever.

20. Food Trucks: I like everything about them, starting with the names: The Bun Stuffer, Happy Camper Café, Dragon Wagon Food Trailer, and Wrappin and Rollin, just to name a few. OK so it’s not the have-to-go out-of-control food cart scene in Portland, but it’s a start. I’ve found the food at each of the food trucks to be solid, and relatively inexpensive. I expect more to come in 2020, including a surprise or two.

Kind of like the county’s economic situation as a whole.